In the ranking of America’s most popular national parks, Colorado’s Black Canyon of the Gunnison falls toward the bottom. In 2021 it ranked 48th of 63 parks with 308,910 total visitors. That means that crowds are a rarity, but that still works out to an average of 800 people per day who come to see the plunging cliffs, colossal spires, and striking rock formations that the Gunnison River has been carving for the past two million years.

To scope out the quietest parts of the park, we’ve teamed up with the outdoor recreation app AllTrails to see which Black Canyon of the Gunnison hiking trails see the least traffic, according to user records. Taking the trails less traveled not only ensures a better experience for park goers, but also helps to preserve the trails themselves. There’s no guarantee that these trails won’t be crowded, since the number of recordings is influenced by factors like seasonal snow coverage, the average age of visitors, and the length of the trail — the shorter it is, the less likely user may be to record it. But they will give you a general sense of which trails have the greatest chance of being empty and offering more space just for you.

AllTrails is free for anyone to join and access trails, but you’ll need a pro membership if you want to be able to download and follow the maps while offline.

To that, we say happy hiking, and these are the nine best Black Canyon of the Gunnison hiking trails for (hopefully) avoiding most people.

What are the most popular Black Canyon of the Gunnison hiking trails?

Black Canyon of the Gunnison’s hiking trails cater to the extremes: short and sweet or demanding yet rewarding. The Warner Point Nature Trail is the former, with its sweetness taking the shape of San Juan mountain views, glimpses into the town of Montrose below, and various overlooks of Black Canyon from the end of the South Rim Drive. Stairs make this trail particularly accessible (and no doubt more popular).

Gunnison Route is one of the park’s harder trails that’s still doable without extensive hiking or climbing experience. It’s steep, with chain ropes to assist in the more technical areas, and requires a wilderness permit. Hikers who came prepared with gloves, poles, water, snacks, and a healthy dose of tenacity rave about the views of the canyon and Gunnison River that runs through the gorge — especially the anglers.

The least popular Black Canyon of the Gunnison hiking trails, from most to least trafficked

“Brutal” but “worth it” sums up the feedback AllTrails users have commented on the Warner Route. The descent from Black Canyon’s South Rim is steep and involves considerable scrambling over loose rocks, a challenge that’s only slightly milder on the way up. At the bottom, hikers are rewarded with the refreshing river and a couple of campsites that make for a great way to split up the climbs. Hiking poles and gloves with grip come highly recommended. More information. 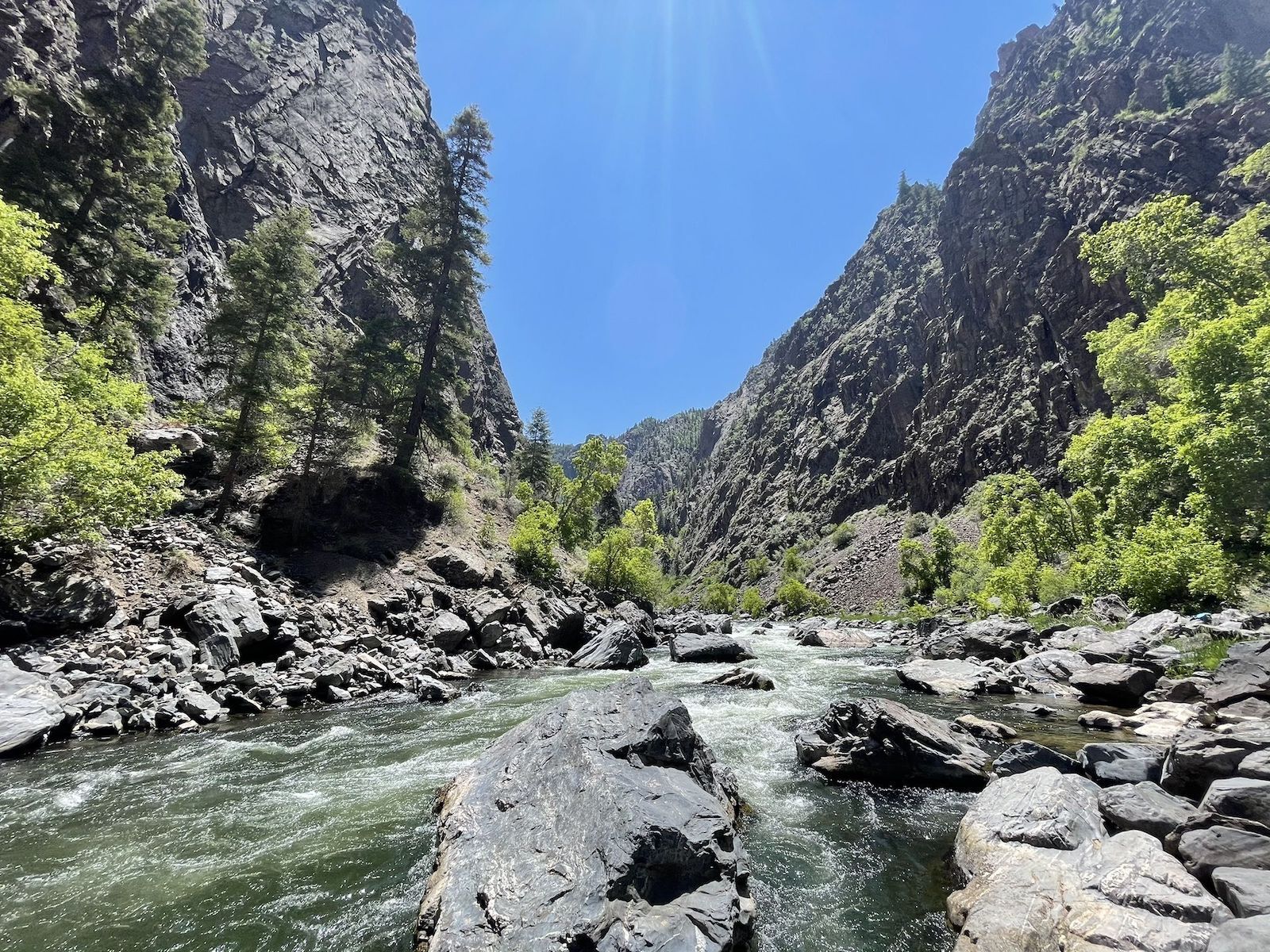 Though it has roughly a third of the length and half the elevation gain of the Warner Route, the Tomichi Trail is no less strenuous, nor is it less of a scramble. (One AllTrails user described their descent as “rock surfing” while another coined their technique a “controlled slide.”) But the river views from inside the canyon are as breathtaking as the exertion, and you’ll probably have them all to yourself. Note that you’ll need a wilderness permit to tackle the Tomichi Trail. More information. 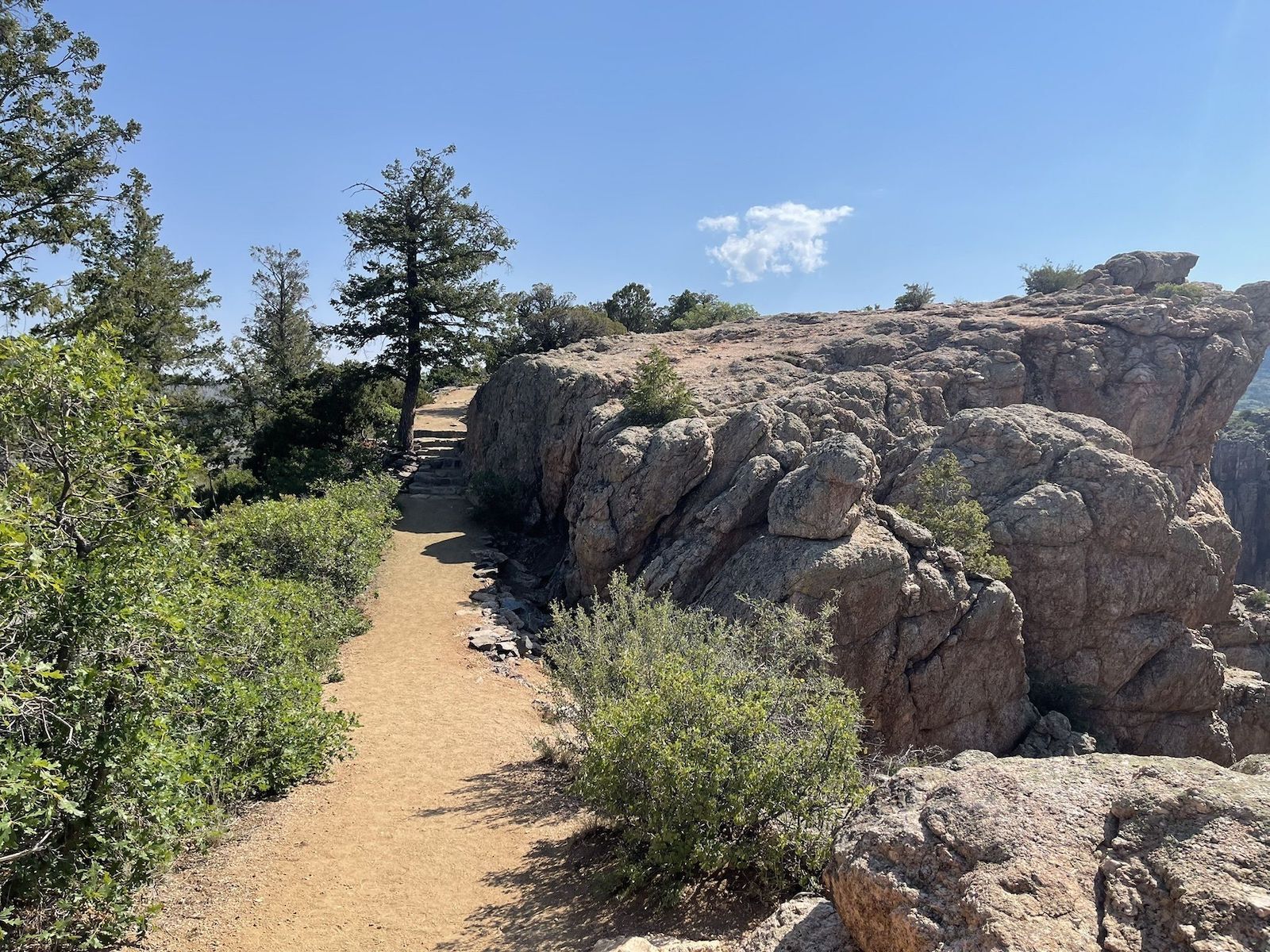 Rock Point Trail is a gentle, well-maintained path leading to a viewpoint overlooking Black Canyon. It’s approachable for visitors of all fitness levels, albeit less so if you’re not a fan of heights. The dramatic gorge at the end of the trail is the obvious highlight, but the wildflowers, shrubs, and rock-dwelling critters lining the path are pretty cool, too. More information. 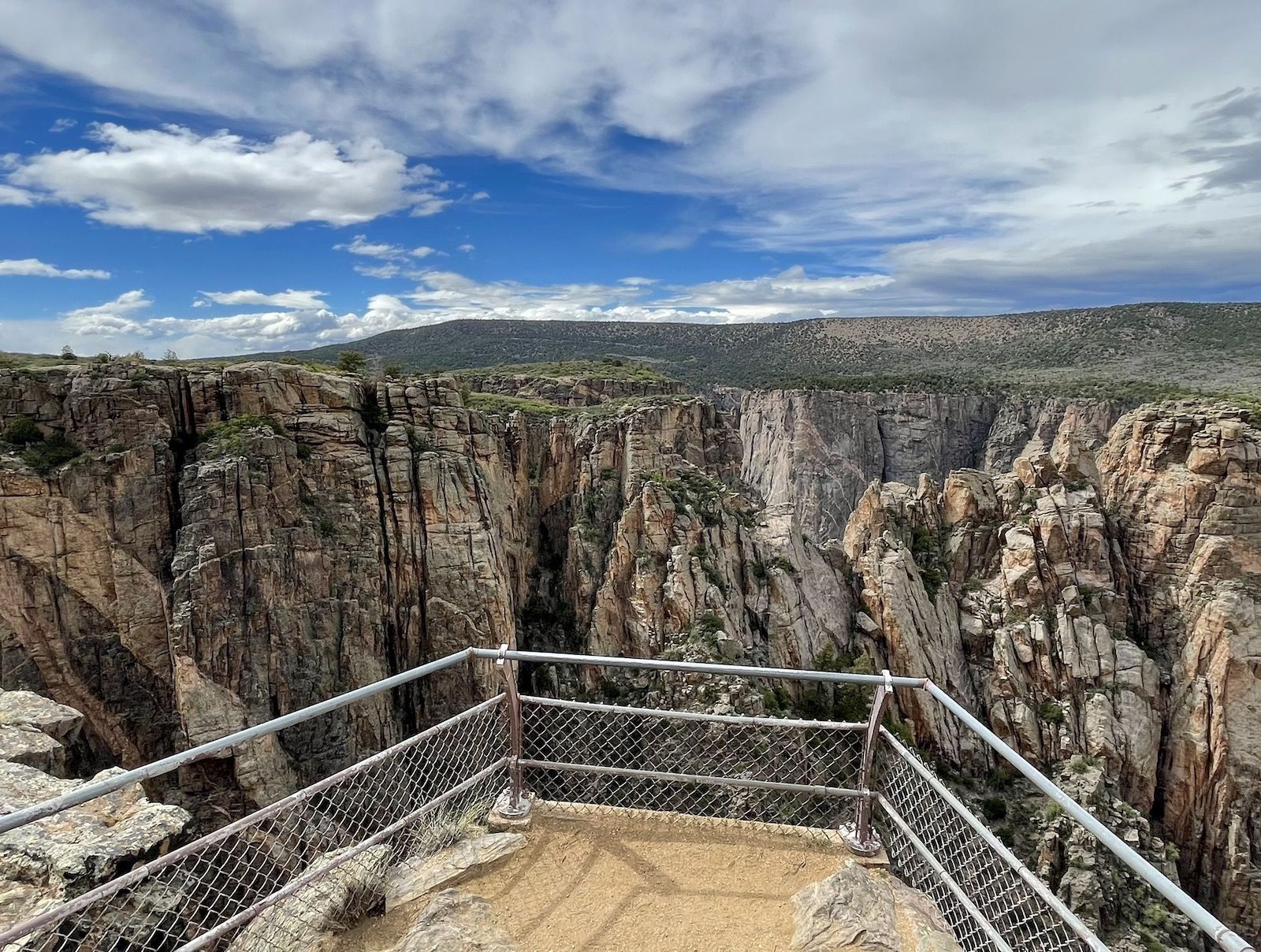 Black Canyon’s geologic formations are on full display on the Cross Fissures Trail. Every step reveals a new angle of the canyon’s pinnacles, keyholes, and crevices. Striped rocks and marbled walls are another standout feature of the canyon, so even though it’s short, you may want to spend more time here than you’re thinking. It does go to some of the best views of all Black Canyon of the Gunnison hiking trails, so it’s possible that there may be more people here than the number of recordings might suggest. But don’t worry if it’s crowded as the viewing platforms at the end are pretty large. More information. 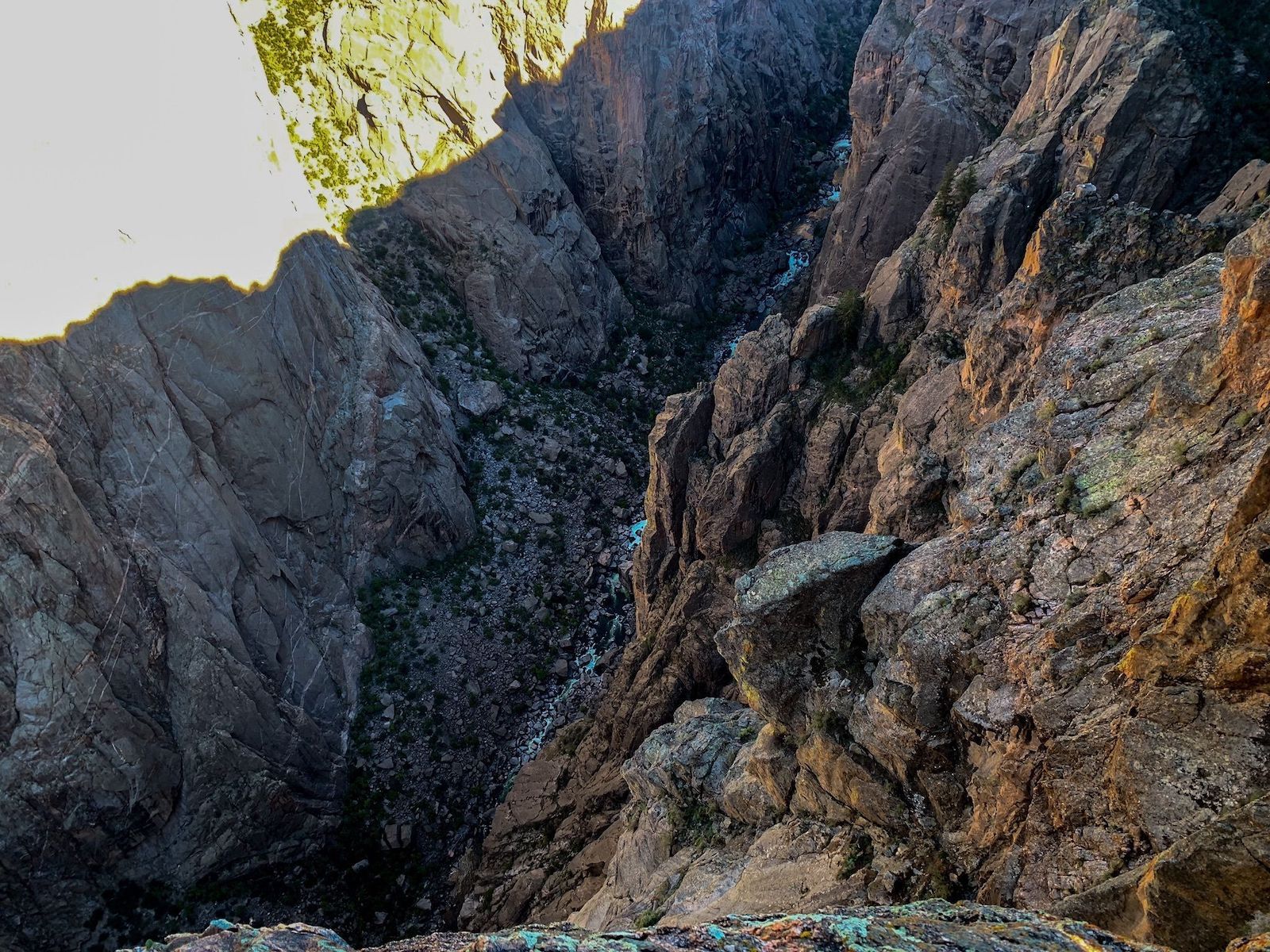 Rock Point, Cross Fissures, and this trail are all located on Black Canyon’s South Rim, which plays host to some of the park’s most easily accessible viewpoints. As its name suggests, the star of this trail’s overlook is the head-on view of the canyon’s chasm, which plunges 1,820 feet toward the rocks below. Take a good look around when you get there: according to one AllTrails user, this is a great spot to see rock climbers scampering up the north wall across the way. Because it’s more of a short walk to a look out than a hike, you don’t need anything special to attempt it — flip flops should be totally fine for this Black Canyon of the Gunnison “hiking” trail. More information. 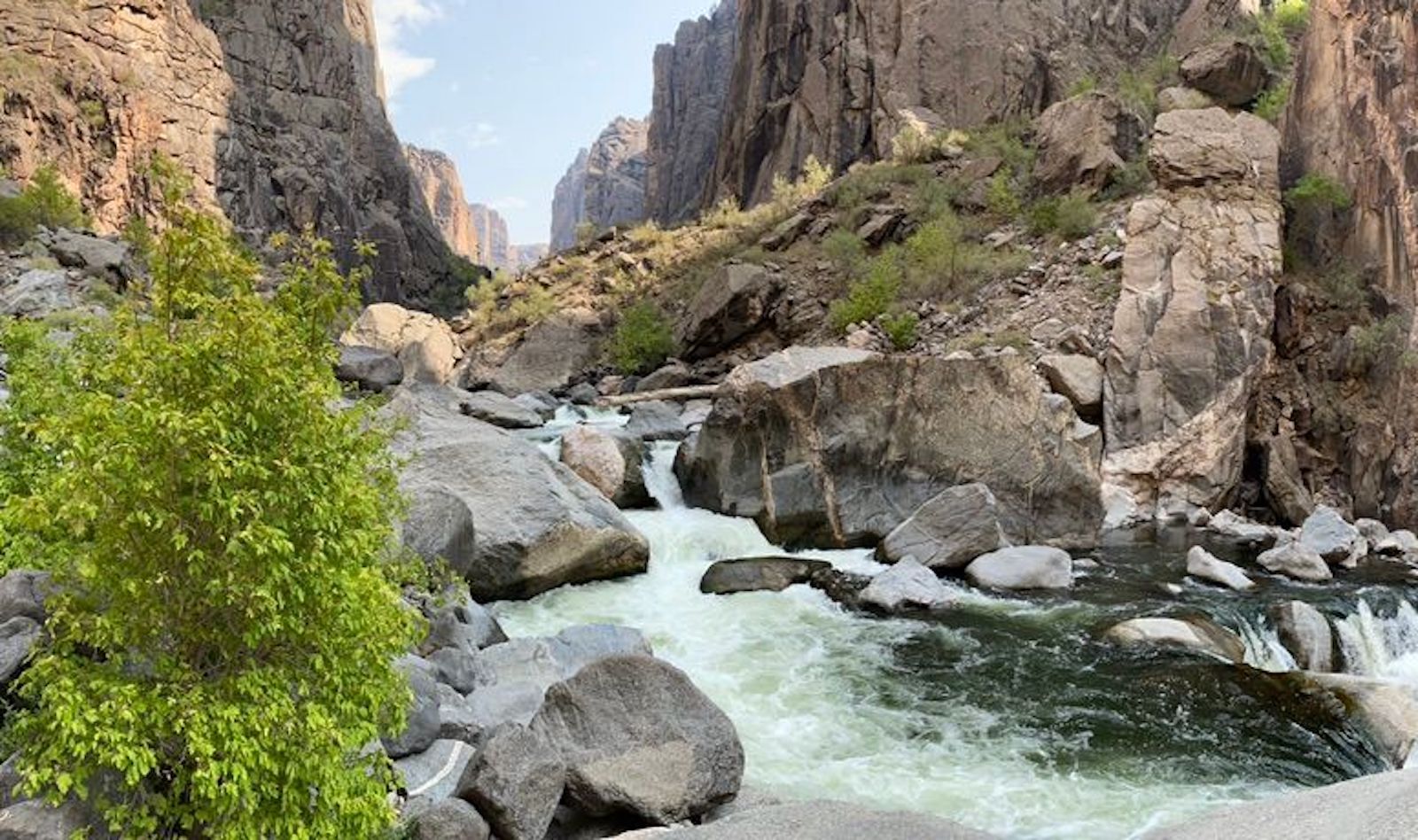 A challenging trail on the North Rim, S.O.B. Draw throws a variety of rocky terrain at hikers, including scree at the top and boulders near the bottom, but truly, it’s a rocky scramble for most of the way. In fact, some AllTrails hikers mention taking  the opportunity to work through mini-bouldering problems on the ascent. Poison ivy is prevalent here, so come prepared with long pants and Tecnu skin cleanser. You’ll be glad you did if it means getting to see the falls and small beach area at the bottom. And don’t let the length fool you — many of the Black Canyon of the Gunnison’s hiking trails may seem easy if you go by distance alone, but they’re very, very steep. Gaining nearly 2,000 feet over the course of one mile is no joke. More information. 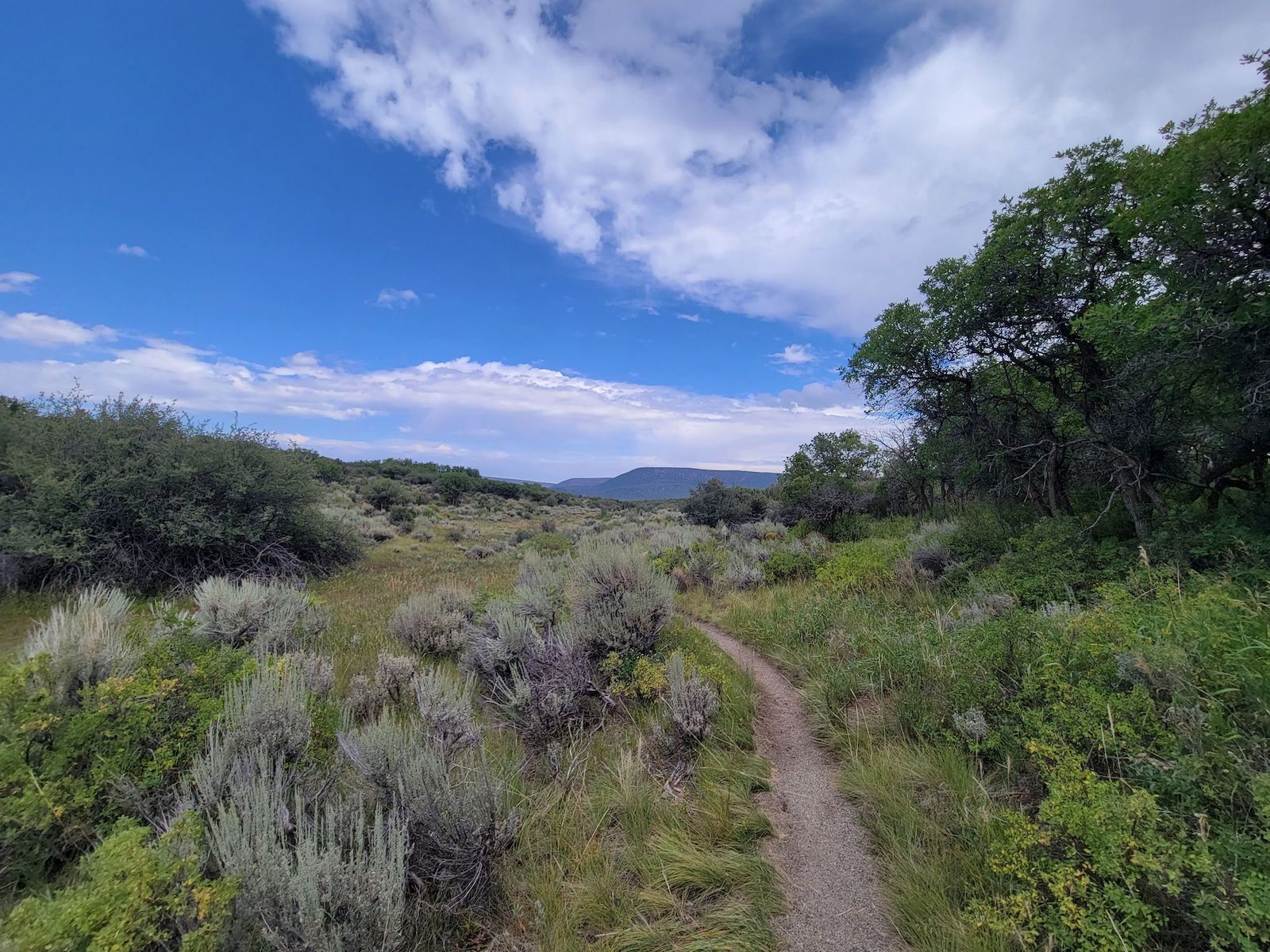 Uplands Trail is a pleasant two-mile route that meanders through the flats behind the canyon rim. April through November is the best time to visit, whether that means taking a sunny stroll surrounded by greenery and wildflowers or traversing through untouched snow. The views here seem wider than elsewhere in the park, offering a little bit of everything: glimpses of the river-cut gorge, tree-lined alleys reminiscent of vineyard lanes, and vistas of the distant hills. Non-hikers will find this Grand Canyon of the Gunnison hiking trail to be on the difficult side of easy, while frequent hikers will find it to be (literally) a walk in the park. More information. 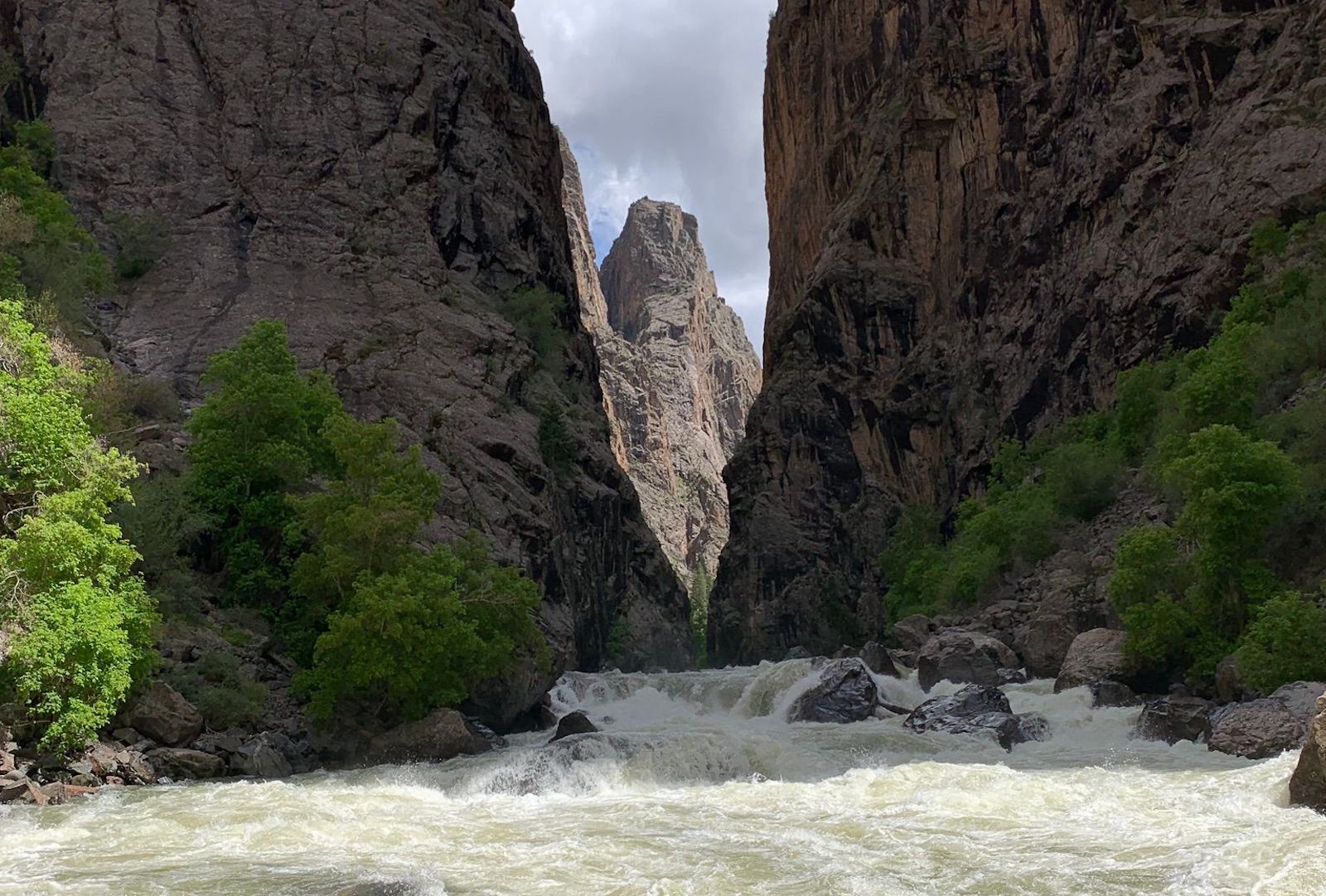 Buckle up for Long Draw. Like many of the harder trails in Black Canyon of the Gunnison, Long Draw presents hikers with challenges such as a consistently steep grade, loose rocks, poison ivy, and two sections that require Class III bouldering skills. Despite the trail being under two miles, AllTrails users reported needing an average of four hours to complete the round-trip trek. But when the river at the bottom is full and flowing, it’s a beautiful spot to take a breath, fish for trout, or even pitch a tent. While 11 recordings is likely deceptively low, Long Draw’s gnarly trail and potential for injuries makes a big dent in the number of people keen to take it on. More information. 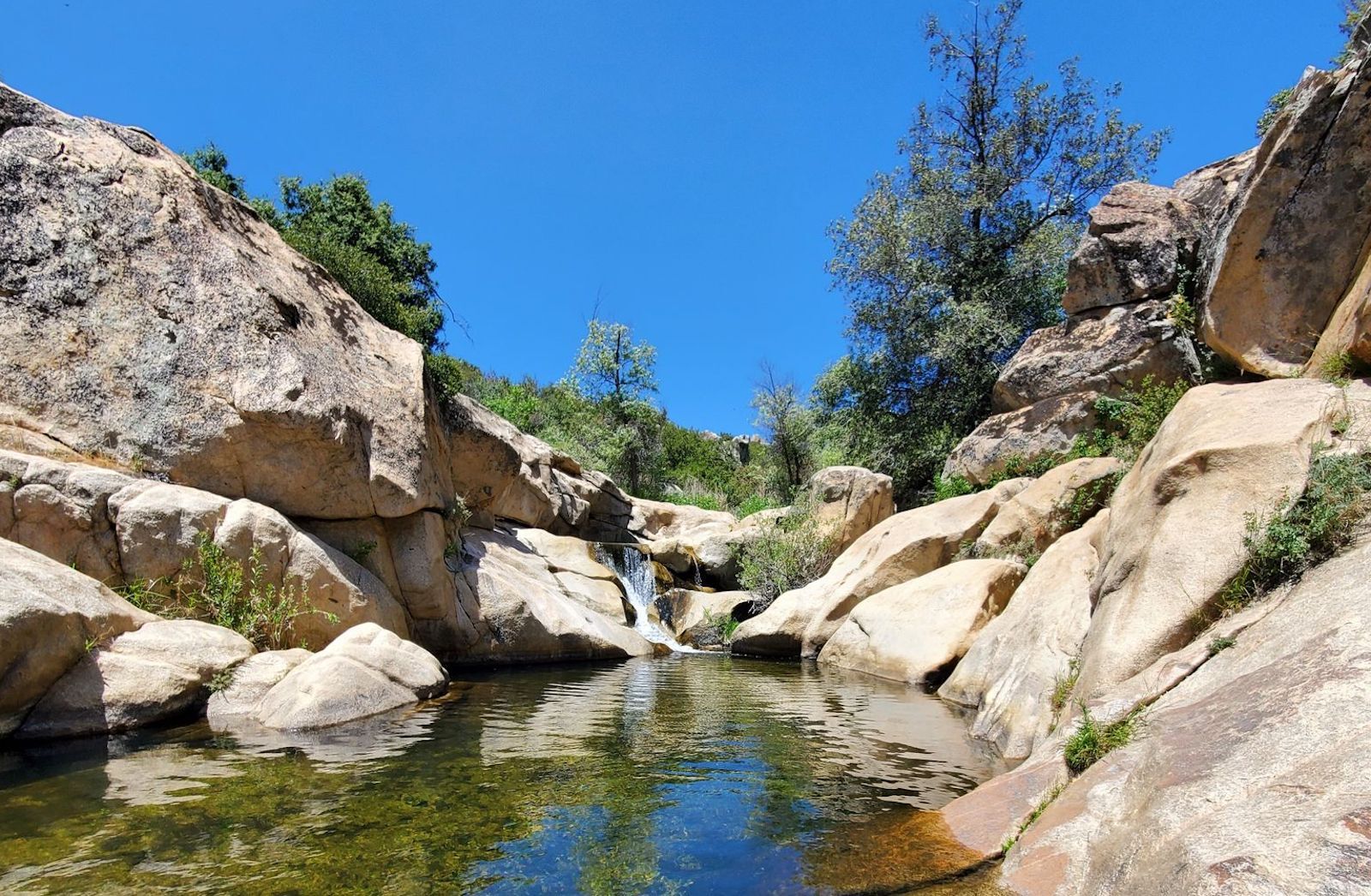 North Rim’s Dead Horse Trail is the only trail on this list that’s considered moderate, owing to its respectable mileage but minimal elevation gain. The viewing area at Deadhorse Gulch rewards visitors who make it to the end, as do the views of Gunnison River’s East Portal. Birdwatchers are likely to appreciate this route, but bears have also been spotted here, so keep an eye out. This Black Canyon of the Gunnison hiking trail is an out-and-back, so you don’t have to go to the end if you don’t want to. But if you’re keen on seeing the waterfall, go in the spring, as it can be quite dry after a hot summer without much rain. More information.