The park on a highway 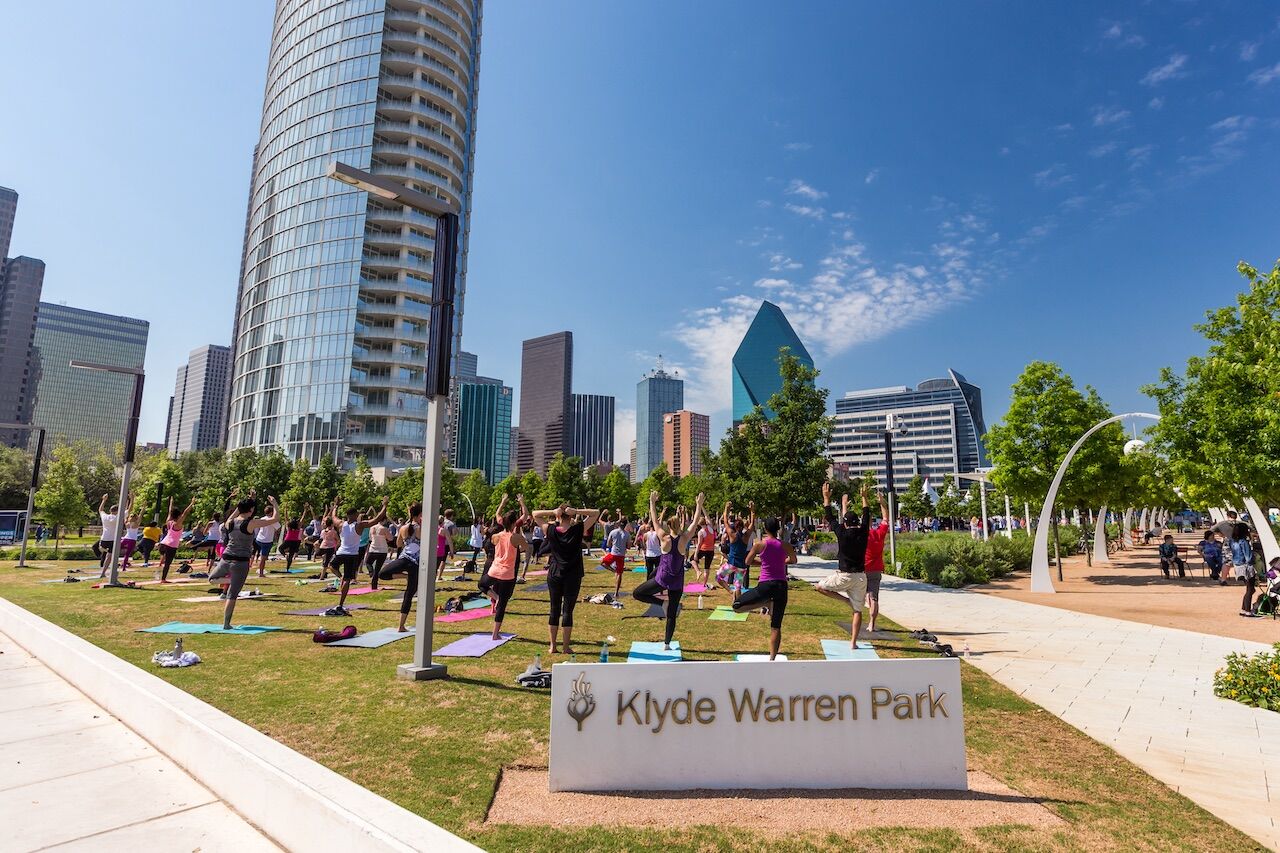 Parks may be found next to highways, but they aren’t usually “on” highways, but that’s the case for Klyde Warren Park. It’s right on top of the Woodall Rogers Freeway, which separates downtown Dallas from Uptown. Klyde Warren Park is 5.2 acres of spacious green lawns, a stage for events, children’s playground, and small putting green. Lark on the Park is on the north side and is an upscale food establishment, while food trucks line up on the south side of the park daily.

Klyde Warren Park provides daily free programs like yoga, meditation, and dance classes. It’s also home to many events such as free concerts or film screenings, fairs, and races. Beyond the free programs and events, other perks of the park include a small library area with racks of magazines, books and games that can be checked out like ping pong, chess, board games, petanque, and croquet. The park is also pet-friendly, and a destination for many dog owners in the city.

Dallas is an extremely urbanized city of concrete, steel, and glass, though it holds a few surprising elements of nature. Oak Cliff Nature Preserve is a 121-acre natural preserve in the middle of the Oak Cliff neighborhood on the south-west side of Dallas. There are eight miles of trails, including wooded areas and broad open wildflower fields. While visitors can hike these trails, the Preserve is well set up for off-road bikers with wooden ramps placed throughout the trails to add to the natural dips and mini-hills of the land. Sculptures and displays are found along the trails, such as a larger-than-life metal spider and a small wooded area filled with road signs and bike parts attached to trees, a pink Christmas tree, and found objects.

A red castle in downtown 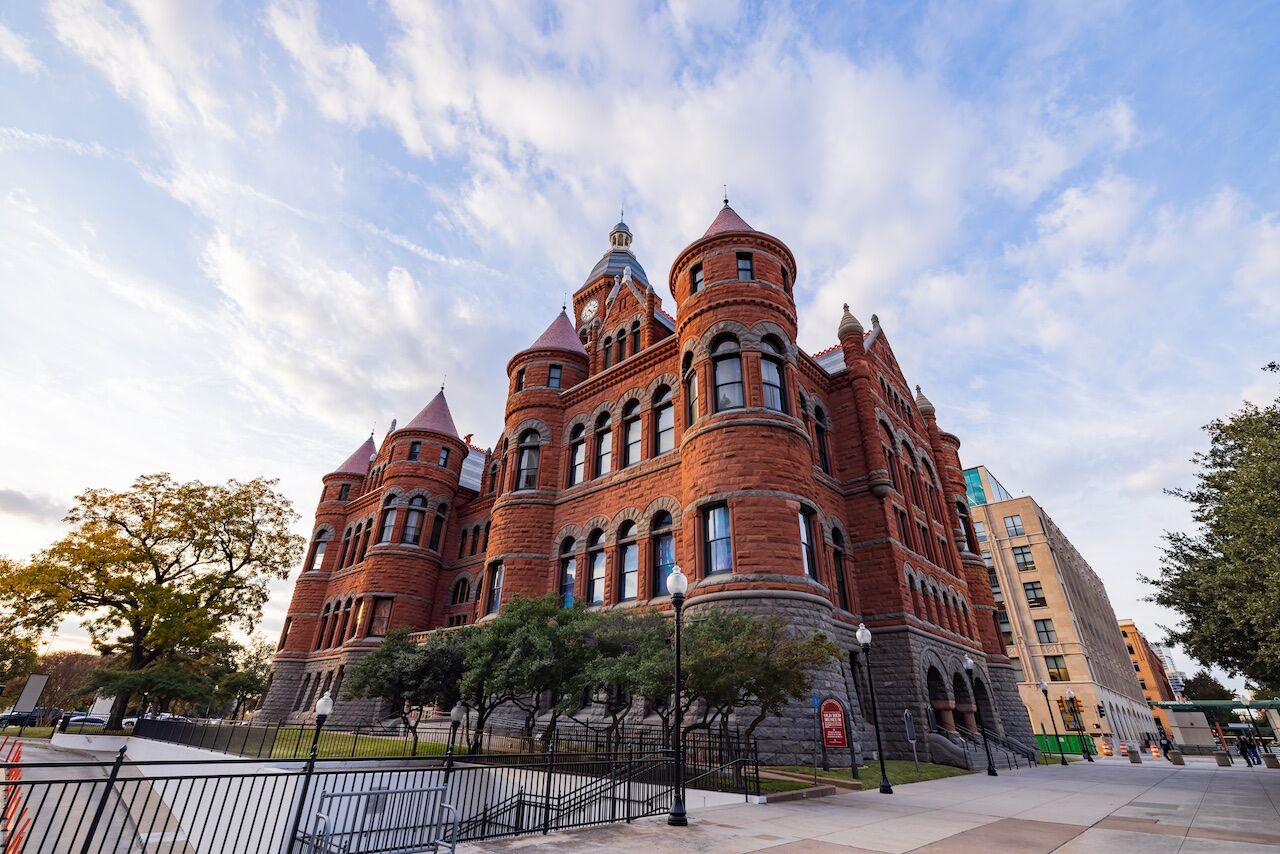 “Old Red,” is a castle in the middle of downtown Dallas on S. Houston Street, adjacent to the JFK Memorial and Dealey Plaza. The Old Red Museum was built in 1892 as the Dallas courthouse. The name for the castle comes from the red bricks of the exterior. Today, Old Red is a museum that focuses on the history of Dallas. Artifacts on display range from mammoth tusks to the handcuffs that bound Lee Harvey Oswald, John F. Kennedy’s assassinator.

The Fabrication Yard, Dallas’ first “free art wall” is located at 621 Fabrication Street. It’s an abandoned warehouse where graffiti artists can have free reign with their artistic expression. Created as a way to help limit illegal graffiti throughout the city, the Fabrication Yard is ever-evolving art, with original displays changing weekly as new artists come out to showcase their skills. Though it generally draws artists, visitors are welcome to walk throughout and take pictures. On weekends, there are generally photographers, models, and videographers using the edgy background for shoots.

The building that rotates 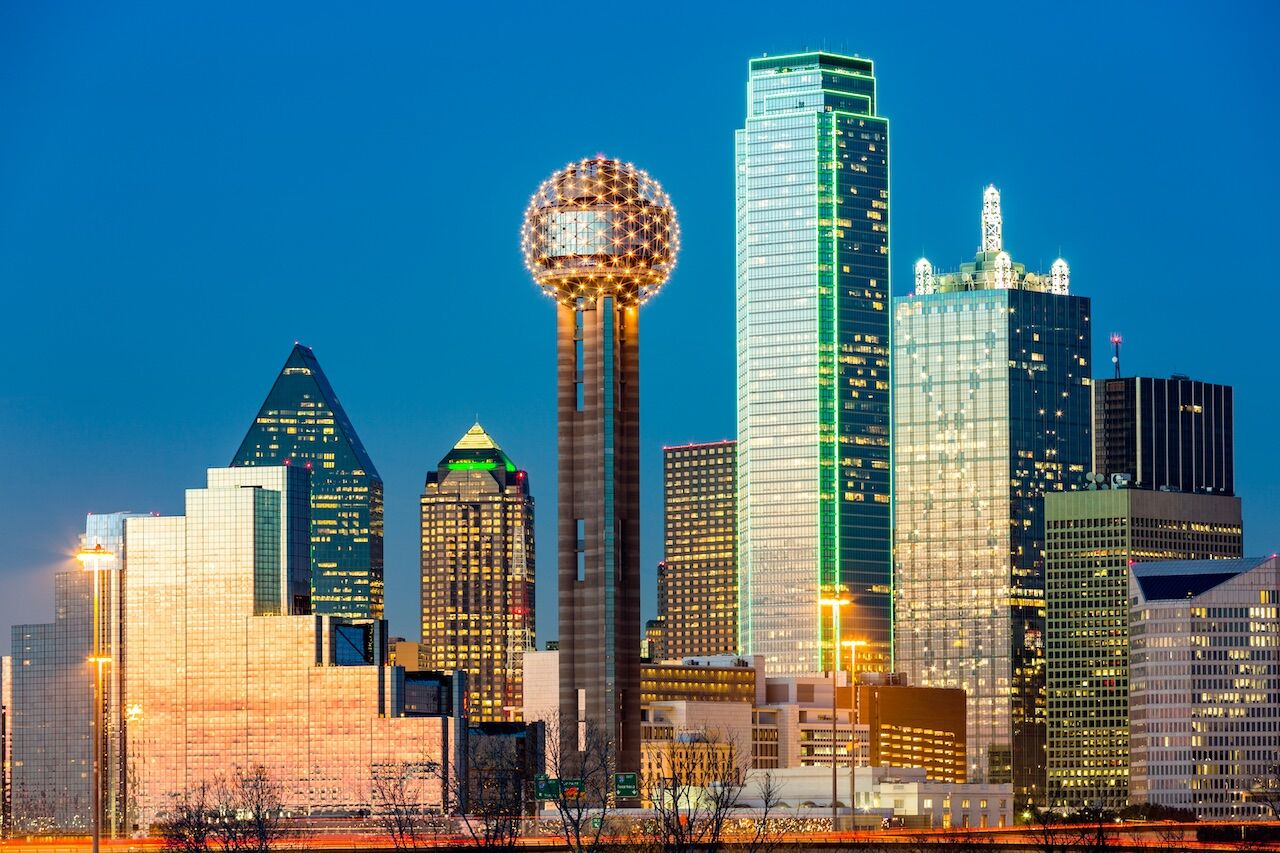 The Reunion Tower is a lollipop-shaped building that rises high on the west side of downtown. It’s home to two restaurants and a GeO-deck that allows visitors to take in 360-degree panoramic views of Dallas from 560 feet in the air.

Guests must buy day or night passes to visit the GeO-deck, which has indoor and outdoor platforms, plus interactive displays that provide information about the city. You can also visit Cloud Nine Café, a laidback restaurant, or the fine dining establishment of Five Sixty Dallas, Wolfgang Puck, both of which have rotating dining rooms on the uppermost floors to enjoy the 360-degree views.

If you’re driving by downtown Dallas at night, you’ll notice that the Reunion Tower lights up with displays which usually feature colors and messages in support of local sports teams like the Texas Rangers or the Dallas Cowboys — or reflect an upcoming holiday or major event in the world.

The longest-running state fair in the country 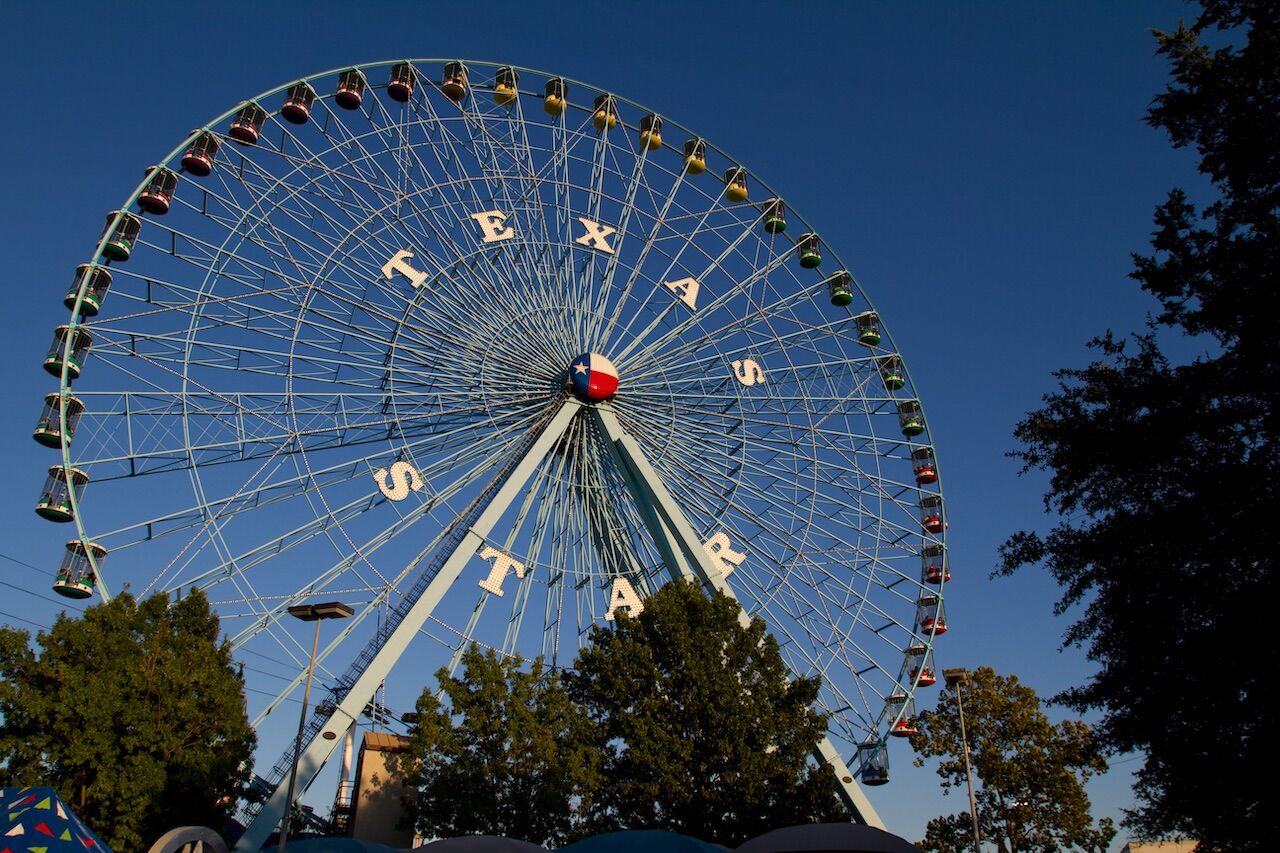 Fair Park in Dallas is home to the State Fair of Texas, the longest-running state fair (and one of the largest) in the country. The State Fair of Texas has been running since 1886 and had over 2 million visitors in 2016. Big Tex is the fair’s most recognizable feature. He’s a State Fair classic since 1952, standing 55 feet tall, wearing a 95-gallon hat and 96-gallon boots while he greets visitors.

Every year the fair features 24 consecutive days of games, amusement rides, art exhibits, auto shows, and concerts, as well as foci on Texas-based agriculture like livestock competitions and petting zoos. Fried food is a big deal at the fair (and all of Texas). Some reports claim that the first fried corn dog was invented by Carl and Neil Fletcher between 1938 and 1942 and introduced at the Texas State Fair.

A yard with old car parts…for you to visit

Porches and patios are a main staple of Dallas restaurants, but the Truck Yard, in the Lower Greenville neighborhood, has one of the most iconic porches in Dallas. The Truck Yard is a large outdoor yard filled with old truck parts. Truck beds have been made into booths, menus are made from license plates, and tires and hubcaps decorate the wooden fence walls. There’s even an old airstream RV turned bar.

On the weekends, musicians perform on a small stage. An indoor bar serves drinks and much-loved Philly Cheesesteaks. Three food trucks line one side of the Truck Yard’s patio and rotate daily, providing extra food options to guests. It’s generally crowded with patrons and their dogs. 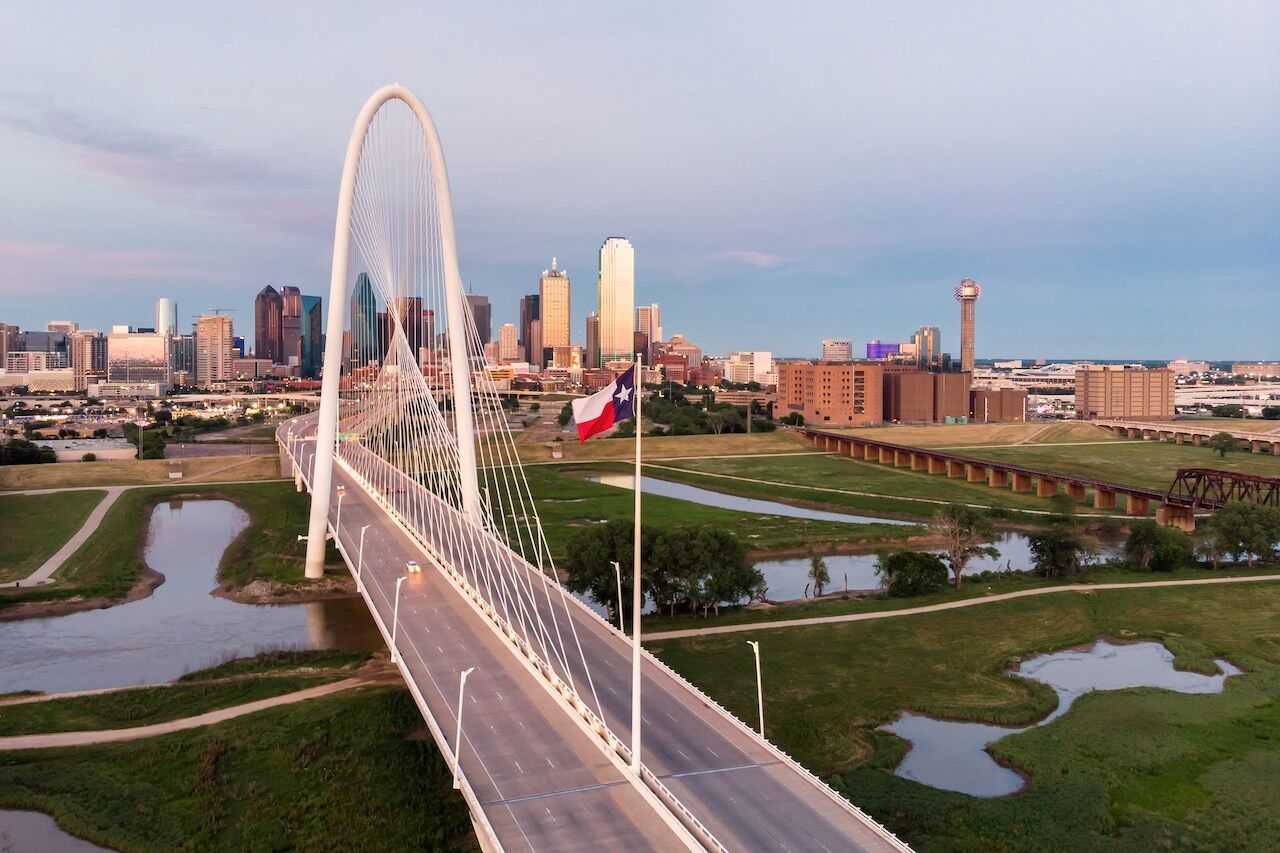 The Trinity River Corridor is a developing neighborhood in West Dallas, the city plans to make one of the largest urban parks in the country at 10,000 acres. It’s set to be completed in 2021 if all goes as planned, but for now, there’s plenty to do and see here.

Trinity Groves is a large warehouse building filled with 12 restaurants and two food shops, all of which have indoor and outdoor dining. Food here ranges from Asian cuisine to Mexican and even upscale Mediterranean food. Luck is particularly popular at Trinity Groves for its beer pairing events which have include Girl Scout cookies and doughnuts with flights of beers.

After a meal or drink at Trinity Groves, visitors can head next door to the Continental Avenue Bridge (also known as the Ronald Kirk Bridge and Felix Rozada Gateway) which crosses the Trinity River. The Continental Avenue Bridge connects Trinity Groves to downtown and is filled with a playground, chairs, plants, and views of the Dallas skyline and the Margaret Hunt Bridge. Fitness classes and daily programs like yoga and Zumba are held here too. Bike paths lead under the bridge and cut through and alongside the Trinity River.

Deep Ellum is a hip east Dallas neighborhood located between Indiana and Canton Streets. Established in 1873, it was primarily a residential and commerce neighborhood for African Americans and European immigrants.

In the 1920s, the neighborhood became a center for jazz and blues artists like Huddie “Leadbelly” Ledbetter and Bessie Smith. In the 1980s to 1990s, the scene changed to one of rock and grunge, but still maintained its musical roots by bringing through artists like the Toadies, Radiohead, Nirvana, and Pearl Jam. Today Deep Ellum still focuses on music with live shows held weekly such as at the huge concert venue of the Bomb Factory, or in the more intimate settings of the clubs and bars that line Elm and Main Street like Trees, Dada, Twilite Lounge, and the Curtain Club.

Deep Ellum is also a huge center for the arts in Dallas with multiple art galleries, weekly gallery art wine walks, a Deep Ellum Arts Festival held every year, as well as beautiful graffiti displays throughout the neighborhood. It is also home to Elm Street Tattoo, whose owner, Oliver Peck, is a long-standing judge on Spike TV’s Inkmaster. Though the neighborhood has always had a bit of a grunge-like, underground vibe, in recent years, rooftop bars, boutique shops, and high-end restaurants have been added to the mix bringing in diverse crowds from all over Dallas.