While thrill-seeking is often associated with skydiving or bungee jumping, some of the scariest experiences can be had just by putting one foot in front of the other. From a stroll high up in the trees to a bridge made from only vines, here are nine of the world’s most perilous and spine-tingling footbridges. 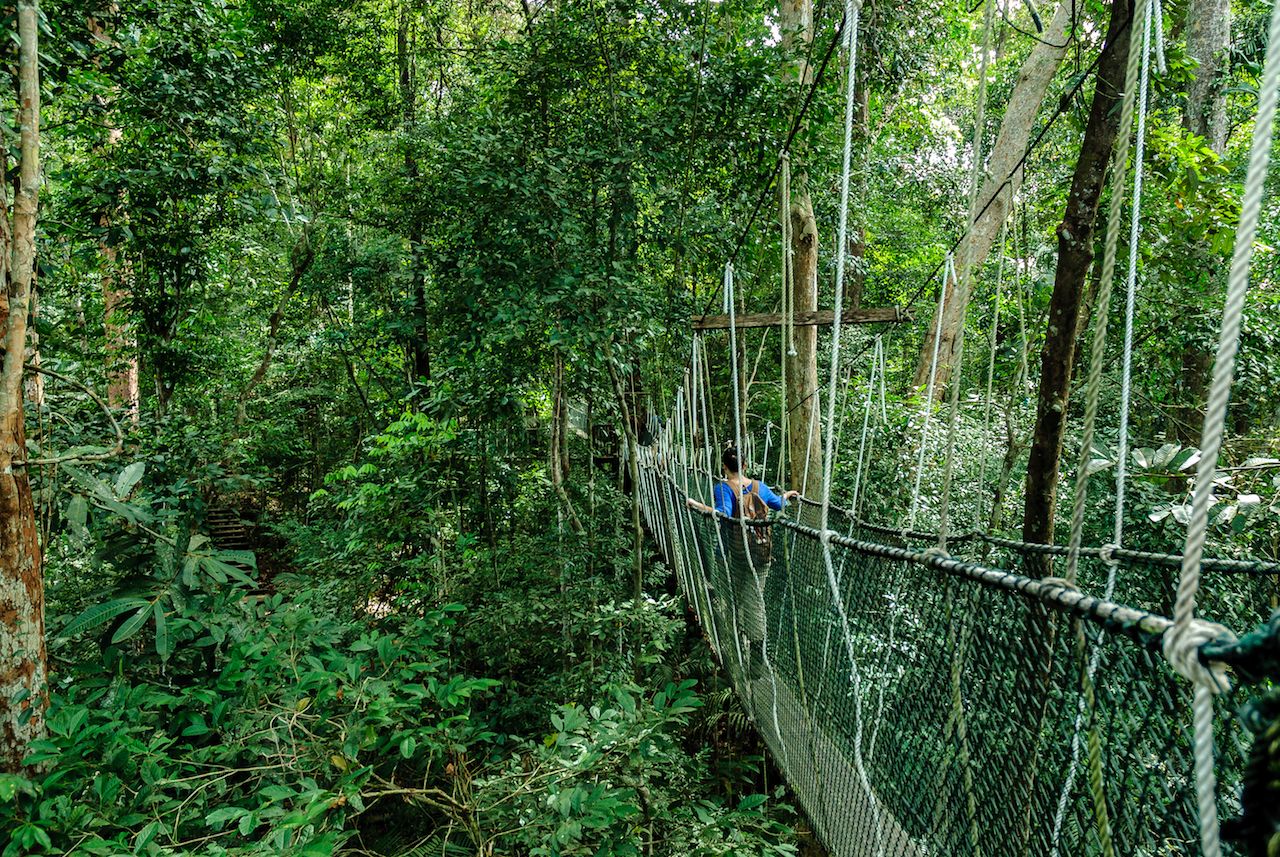 What started out as a way for biologists to get a tree-top view of their canopy-dwelling animal and plant subjects, has now become one of the best ways to experience the flora and fauna of the oldest rainforest in the world: Taman Negara. The Taman Negara Canopy Walk is a narrow, wooden path that leads you 530 meters (1738 feet) through dense greenery — the forest floor a heady 40 meters (130 feet) below — allowing intimate access to the megadiversity of Malaysia, which, in this rainforest, includes giant squirrels and a third of the world’s total bird species. 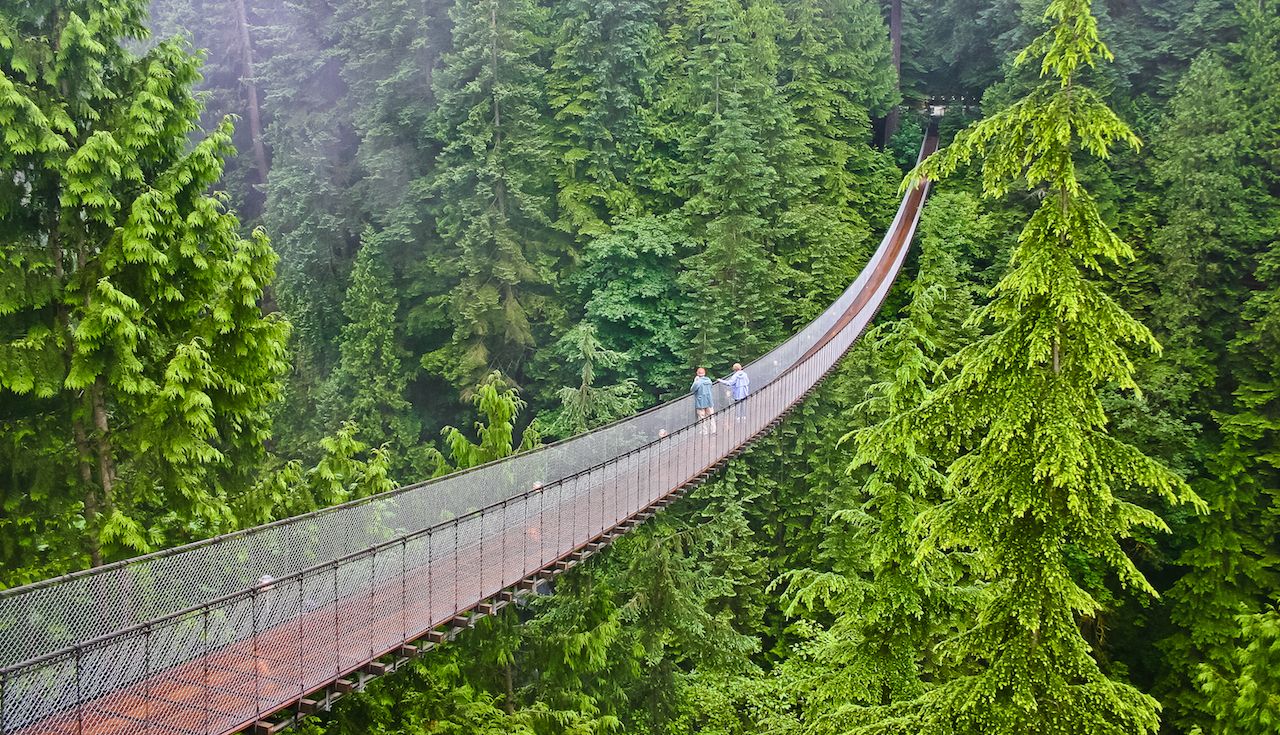 Head to British Columbia to walk on the Capilano Suspension Bridge, a footbridge 70 meters (930 feet) above the Capilano River. When it was originally built in 1889, the bridge was made from little more than ropes and wood. Today, it’s one of the area’s top tourist attractions. In 1974, it was even the site of a well-known research experiment exploring the connection between fear-induced adrenaline and sexual attraction. If the rushing waters below freak you out, keep in mind that the bridge has the capacity to hold the weight of 96 full grown elephants. 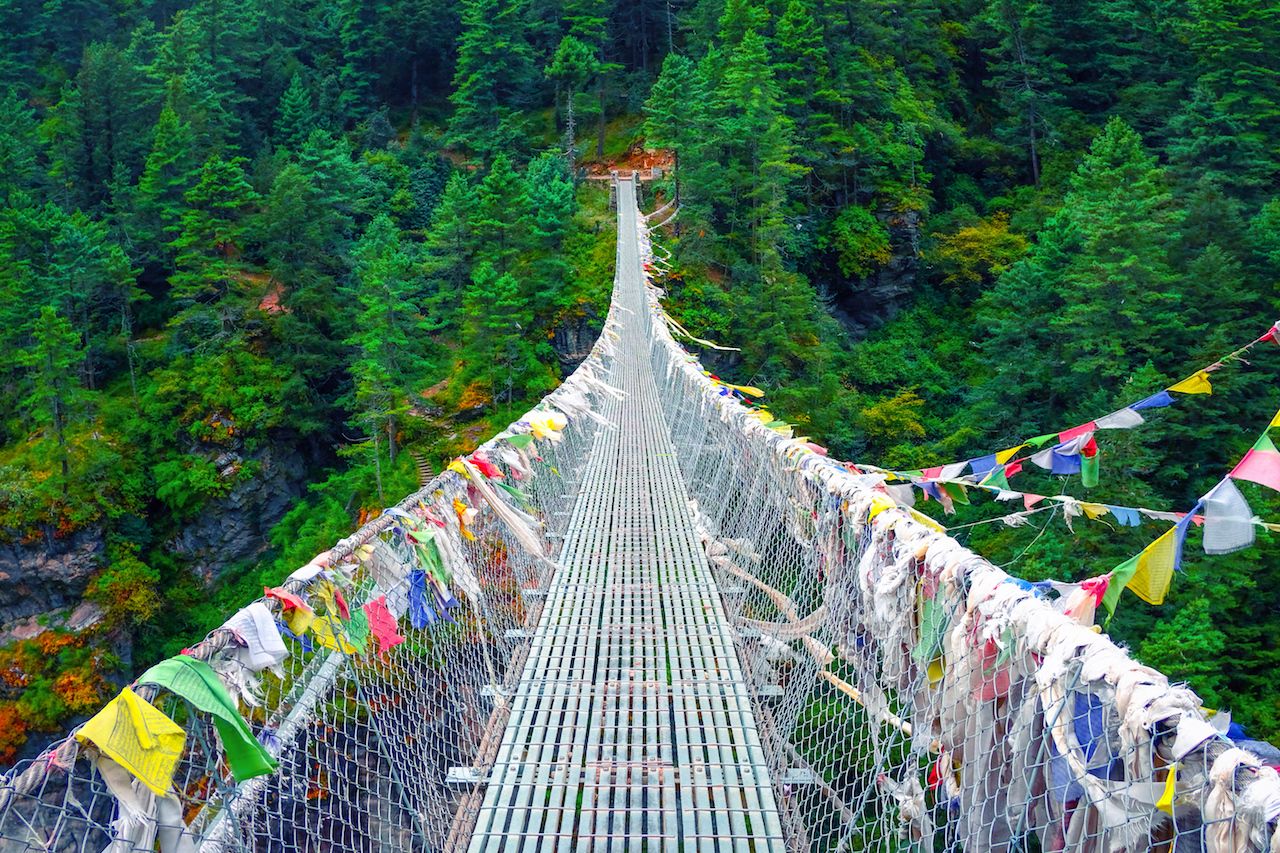 Stretching almost 370 meters (1,200 feet) across the Gandaki River, this bridge in Nepal was built to relieve congestion on main roads caused by animal traffic. The bridge leads to Ghasa, a small Himalayan village found along the Annapurna circuit, a circular route that traverses the Annapurna range over 12-20 days. While a relatively new road has made some portions of this trek accessible by bus (and a bit dusty), you can avoid vehicles by taking the eastern route from Kalopani to Ghasa and cross that cool bridge. 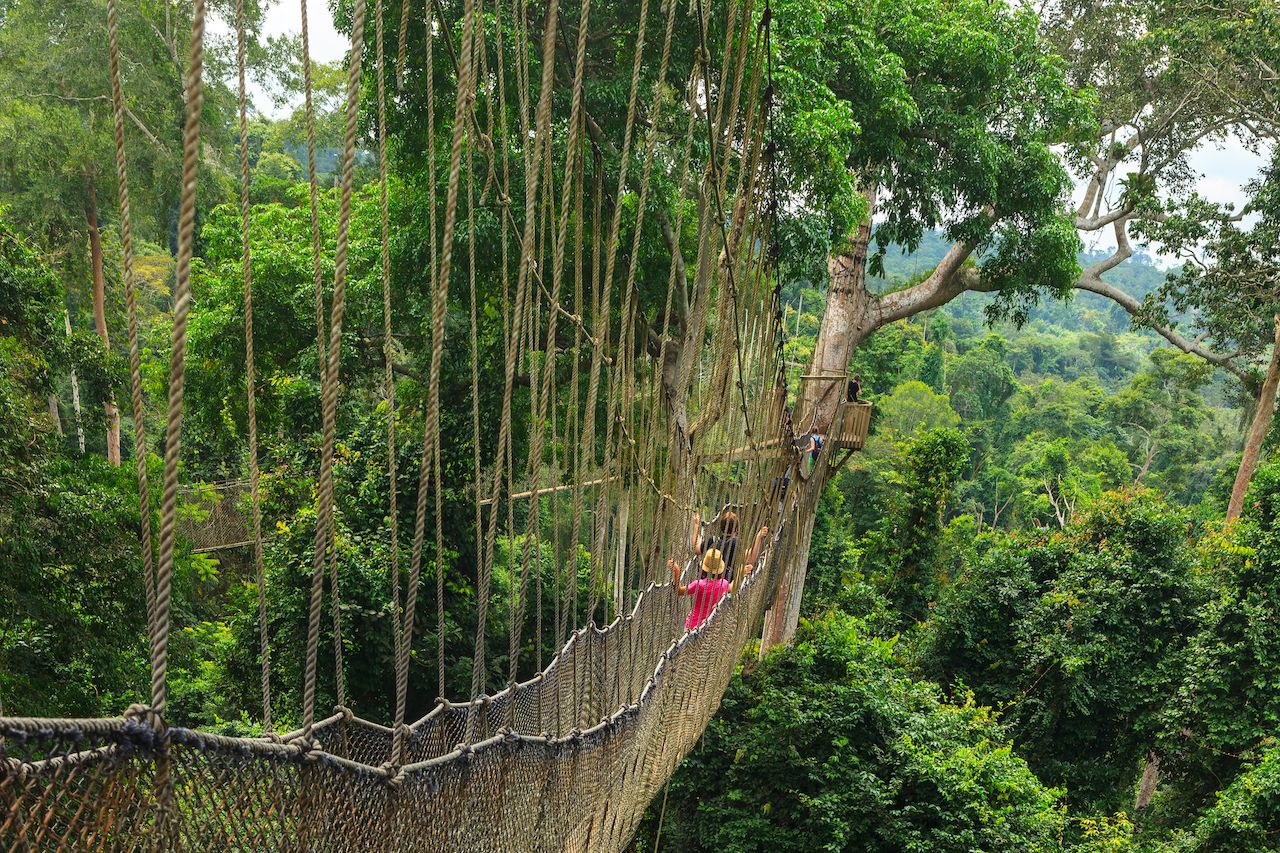 Two Canadians helped design this elevated walkway to encourage ecotourism at Ghana’s Kakum National Park. Hold your breath as you sway from tree to tree, suspended 30 meters (100 feet) in the air. The path appears more rickety than it is, with metal wires reinforcing the traditional rope and wood structure and a mesh net to prevent anyone falling onto the forest floor. 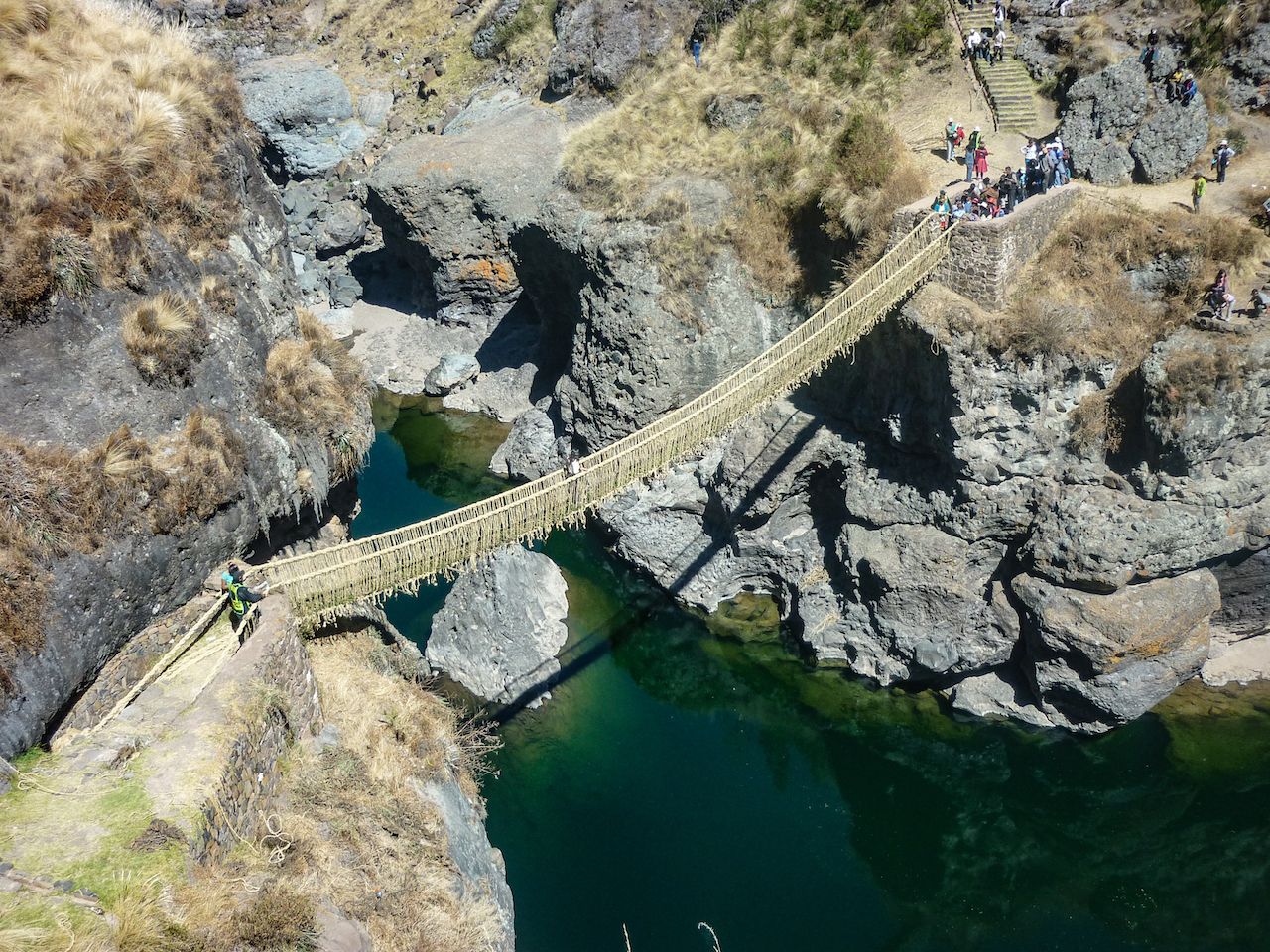 For over 500 years, woven grass bridges have been a part of the Inca trail system, and their annual rebuilding has been a longstanding community tradition. Keshwa Chaca is the last remaining one in existence, spanning 35 meters (118 feet) between sheer cliffs cut by the Apurimac River, 18 meters (60 feet) below. Don’t let appearances stop you from taking the first step, the bridge is kept in great condition by the people of nearby Quehue. 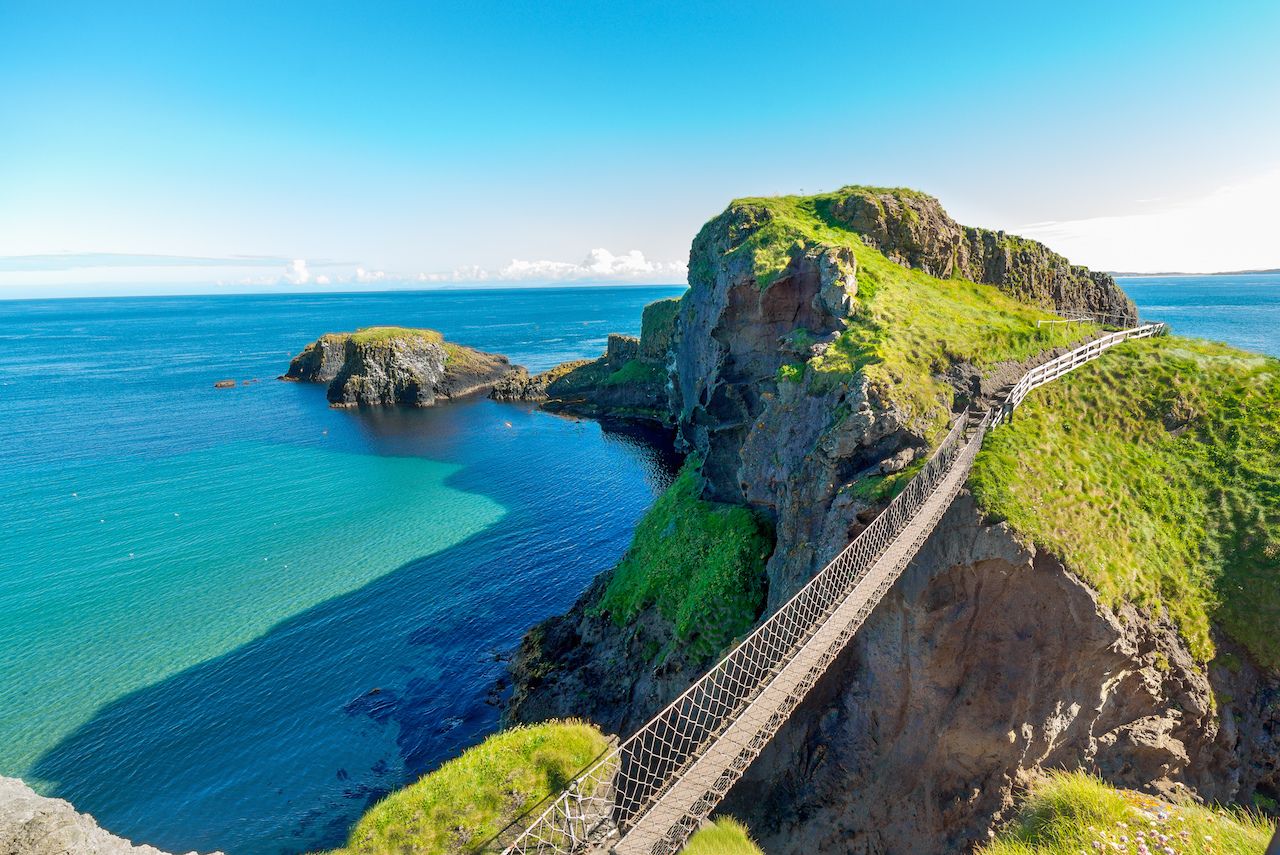 This perilously-situated bridge connects mainland Northern Ireland to the small fishing island of Carrick-a-Rede. Walk the same path tread by centuries of salmon fishermen — the builders responsible for the first iteration of the rope and wood bridge over 350 years ago — as you dangle 30 meters (100 feet) above the choppy Atlantic Ocean. The weather tends to be fickle in this area and it’s not uncommon for a change of conditions to require visitors to the island to be taken off by boat, so check the forecast before you go. 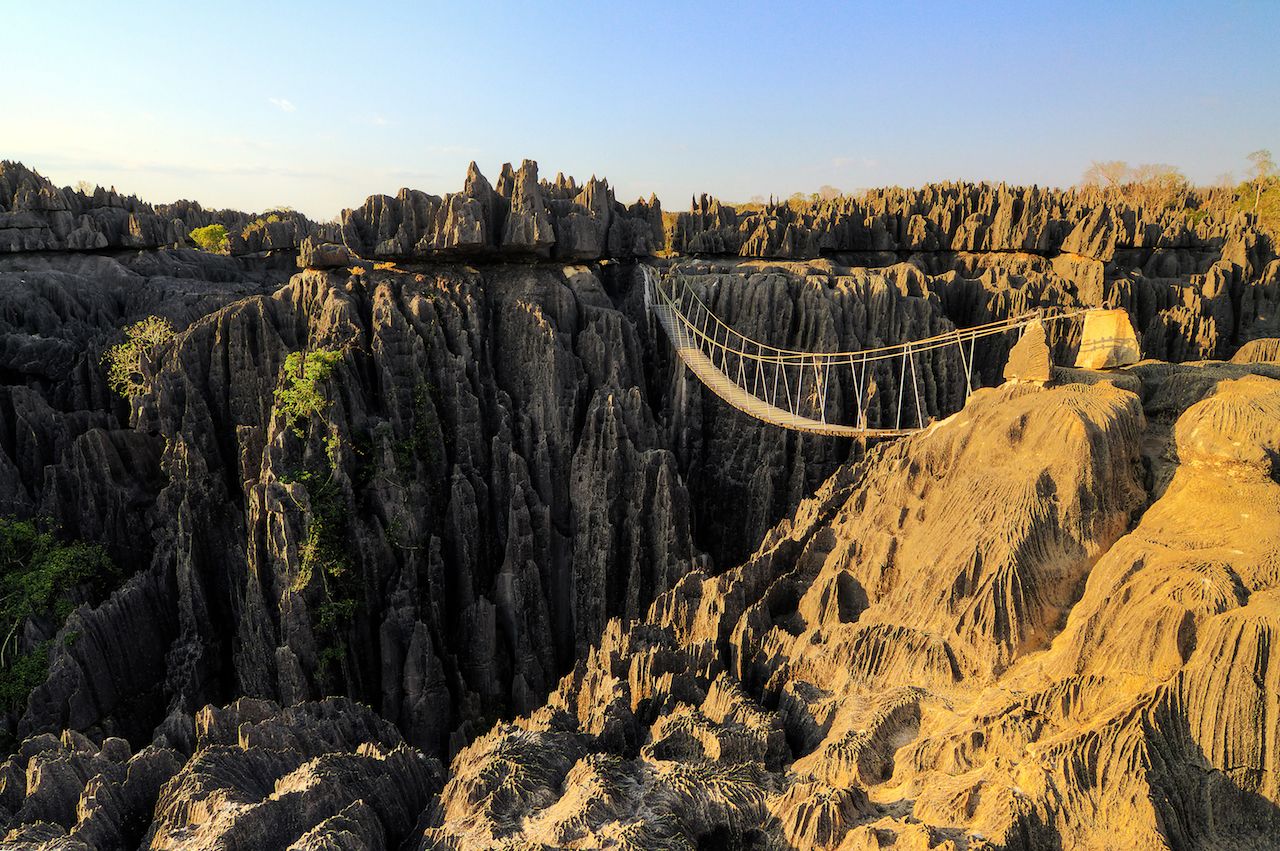 Designated a UNESCO World Heritage site, Tsingy de Bemaraha National Park is made up of hundreds of limestone ‘needles’, creating a dramatic slate landscape of peaks and crags. Take at least half a day to explore the area of Big Tsingy, where you will scramble over rocks and through caves while clipped into a harness system for safety. Throughout the trek, wood and rope bridges strung between limestone outcrops will make your heart pump as they lead you over the razor-sharp rocks below. Don’t be surprised if one of the area’s many lemurs joins you on the crossing. 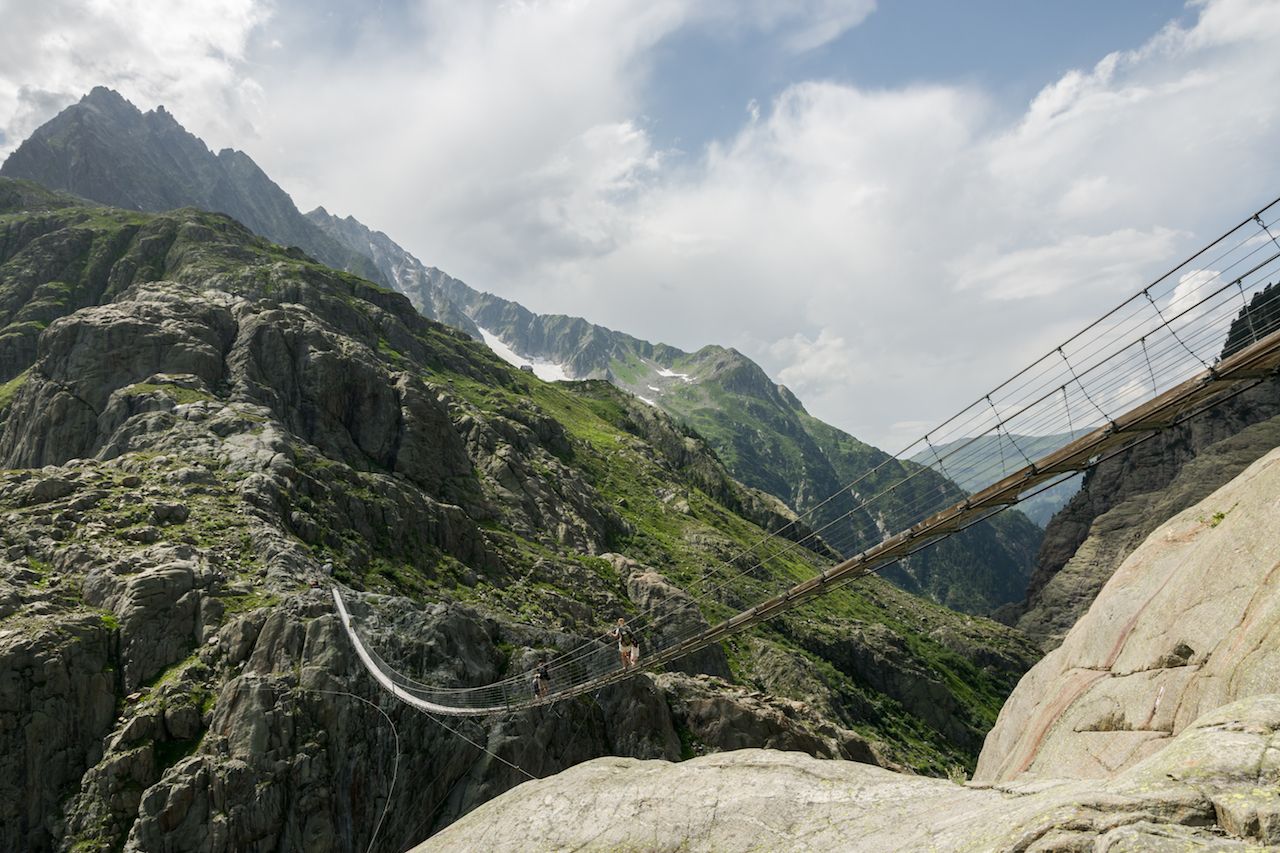 When melting glacial waters flooded the footpath to the Swiss Alpine Club’s Trift Hut, Switzerland decided to string a 170 meter (560 feet) suspension bridge across the new-found body of water. The Trift Bridge, originally designed with Nepal’s time-tested three rope structures in mind, carries you 100 meters (330 feet) above the ground. After proving its popularity with visitors, it was rebuilt with heightened safety guidelines in 2009 and is now one of the most well-known and dramatic ways to access the Alps by foot. 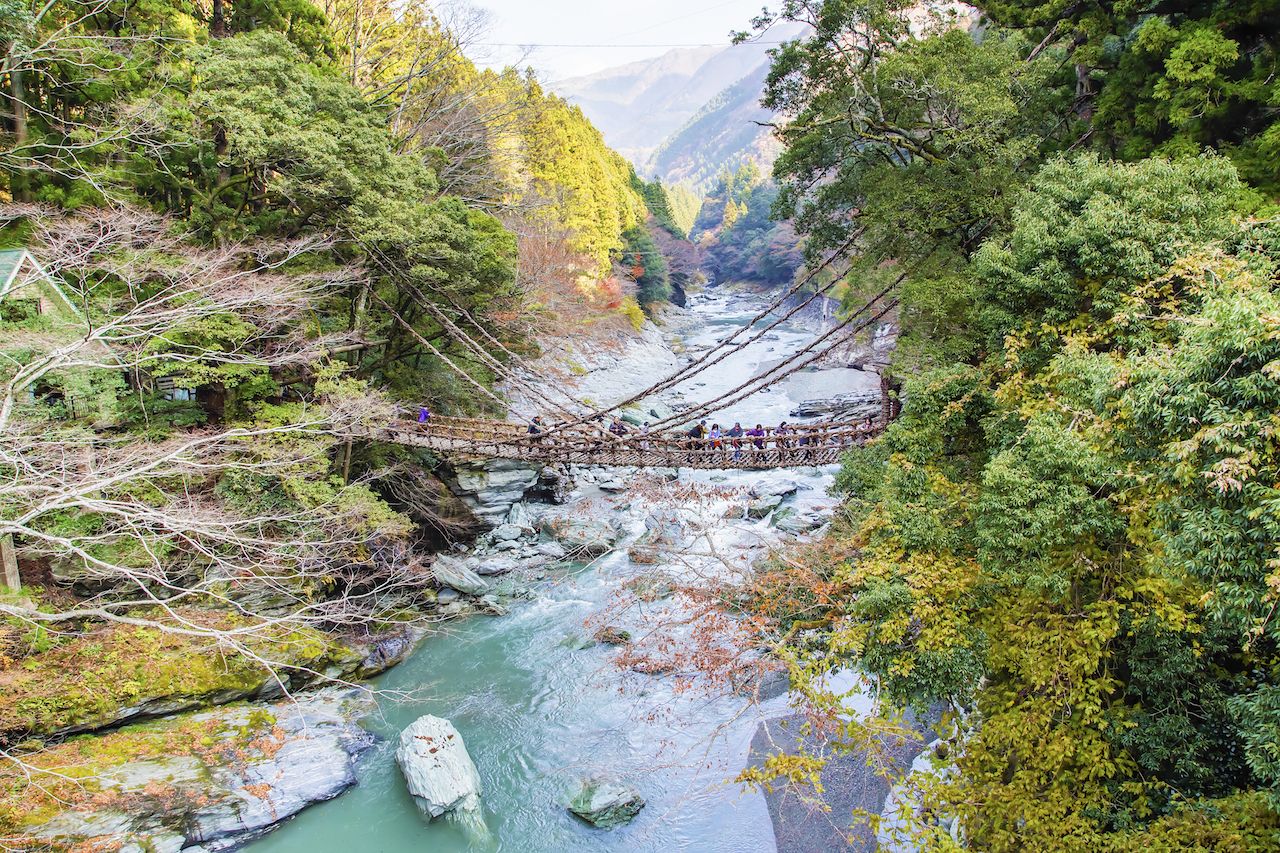 These impressive footbridges are found deep within the notoriously difficult terrain of Japan’s smallest main island, Shikoku. The bridges are painstakingly made up of hearty vines woven together, with widely spaced wooden slats acting as footholders. Their mythical origin story places the bridges’ creation in the hands of the founder of Shingon Buddhism, while others say the vine bridges were made for quick-cutting in the case of enemy pursuit. Don’t be alarmed though: the quick-cutting days are over, with the bridges now securely (and permanently) fastened to land.

Galleries30 of the world’s most beautiful bridges [PICs]
Tagged
Art + Architecture
What did you think of this story?
Meh
Good
Awesome