Dress codes are something you’d typically associate with nightclubs, dinner parties, and weddings – not going on an airplane. Yet in January, actress and fashion influencer Olivia Culpo made headlines when she was pulled aside before boarding her American Airlines flight to Cabo San Lucas and told her outfit was inappropriate. Apparently, her black bralette, biker shorts, and cardigan weren’t in line with the airline’s dress code for passengers, and she was asked to cover up before being allowed to board.

The incident ignited a firestorm of reactions online, with some defending the superstar and others lambasting her outfit. Regardless of your stance on the issue, for many people the controversy raised one key question above all else: “Wait, airlines have dress codes?”

Yep. Wearing jackets, ties, and dresses in flight might not be as ubiquitous today as they once were, but there are still wardrobe rules – both written and unwritten – that airlines expect passengers to follow. We spoke to some experts to learn more about these little-known airline dress codes, and how not to accidentally violate them.

Airplanes aren’t nightclubs. Flight attendants aren’t stationed at the gangway looking to turn people away because their shoes don’t match their shirt. They are, however, prepared to ask passengers to change if their outfit is deemed inappropriate according to the specific airline dress code for passengers.

“Shirts with vulgarities and offensive pictures or language are definitely off-limits,” says Intan, a former flight attendant with Jetstar International Airways and Qatar Airways, adding that people can’t wear anything “too revealing.”

Revealing clothing seems to be a major culprit, and significantly targets women over men. It also happens to be the most-often flagged dress code violation by the flight crew.

“Some female passengers have come on board with very revealing clothing,” she says. “Think bikini under an unzipped hoodie and micro shorts. They may be heading to Bali for a wonderful summer vacation, but needless to say they’re told nicely by the ground staff to cover up.”

Different airlines, however, have different rules. What’s true for a domestic airline like Alaska Airlines, American Airlines, or United Airlines may not be true for airlines based in other countries that have different cultural norms.

American Airlines, for example, lists in its conditions of carriage that passengers must ““Dress appropriately; bare feet or offensive clothing aren’t allowed.”

“On Qatar Airways,” Intan says, “the dress code is a little stricter, as the mid-point is a conservative Muslim country. Some passengers may want to visit Doha as a stopover, but they must observe the strict dress codes – no sleeveless shirts, and pants must be no higher than your knees.”

Why do dress codes for airlines exist? 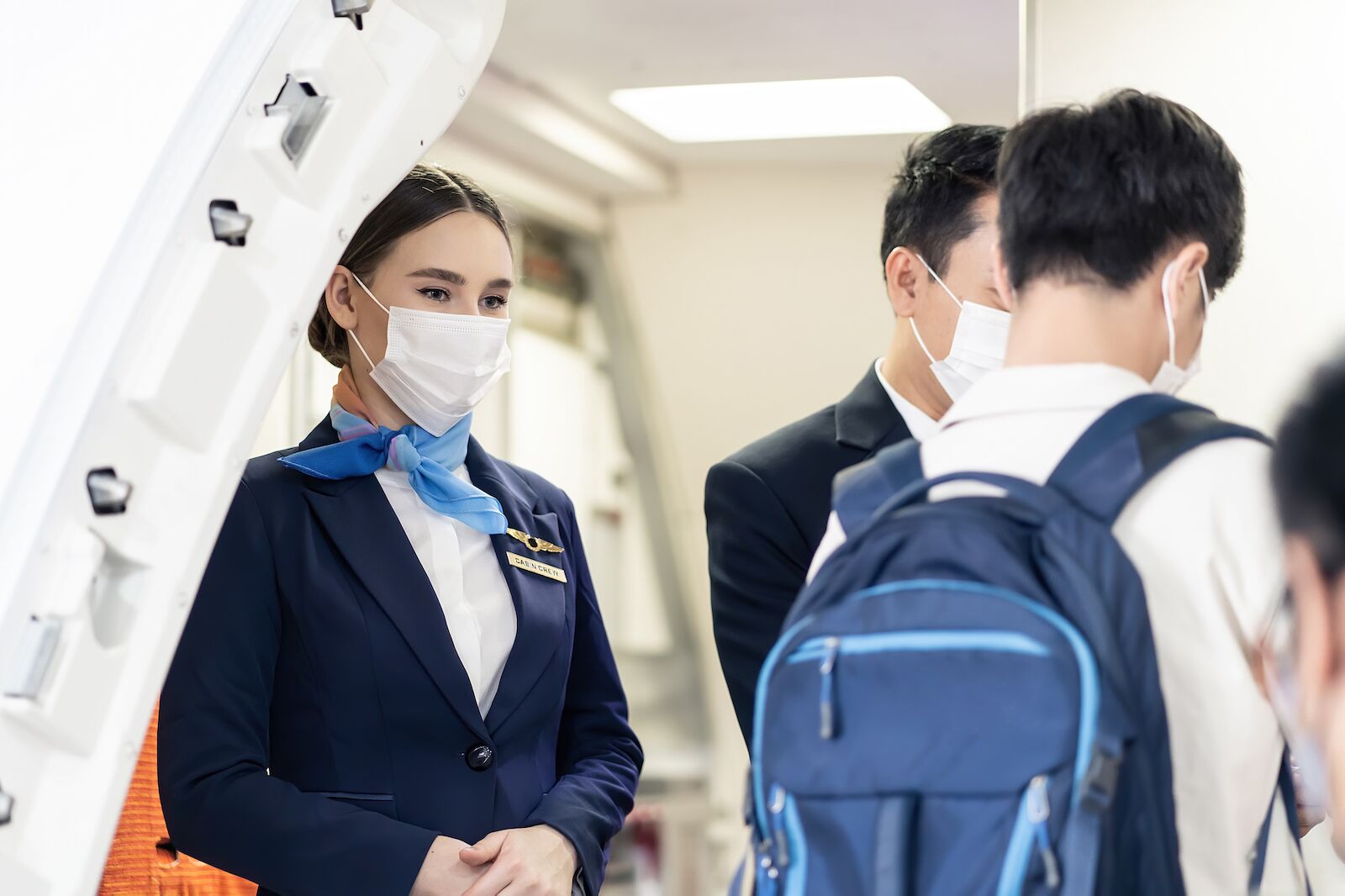 Air travel is tedious and uncomfortable enough. Why impose even more restrictions on passengers? Well, it’s not as puritanical as it might sound. According to Intan, airline dress codes are mainly to “avoid offending anyone onboard, and avoid conflicts in flight that could lead to flight delays.” Maintaining harmony is key mid flight, after all.

“Passengers cannot come onboard bare-footed because they might cut their foot on debris on the ground and require medical attention,” Intan says. “Every rule is to ensure customers’ safety.”

What to wear on a plane

Carolyn Paddock, a former flight attendant for Delta and the founder of In-Flight Insider, a bespoke company for private jet owners and travelers, advises travelers to dress nicely even if they’re not doing so to adhere to a dress code.

“Dressing well makes you stand out in a positive way,” she says. “In many ways it’s a sign of respect, and airline employees respond very well to seeing passengers who are dressed well.”

And take note: According to Paddock, well-dressed passengers are more likely to be eligible for upgrades than those dressed sloppily.

“One unwritten rule is that dressing well makes you a candidate for potential upgrades,” she says. “On one occasion, when I was flying for a commercial carrier, we were boarding an oversold flight from New York to Milan. Coach was oversold, and there were open seats in Business Class that we were going to use to accommodate our passengers. The gate agent asked me to choose six ‘appropriately dressed’ people for the upgrade. I walked through the coach cabin and chose six passengers who were the most polished and well dressed.”

What happens if you break an airline’s dress code

Breaking an airline dress code for passengers won’t get you tossed out the emergency exit door, but there are repercussions that could inconvenience you and your fellow passengers.

“Most likely, offending passengers will be asked to change before being allowed to fly,” Intan says. “Failure to comply may result in the person being offloaded. It’s a messy process and will ruin holidays, so please comply with the instructions of the flight attendant. If the passenger still refuses to listen, they could potentially be blacklisted from flying on the airline.”

Flight attendants are not, however, out to ruin trips or make life difficult for passengers.

“For rule-breaking passengers, flight attendants have to deal with the situation respectfully and tactfully,” Intan says. “We are not out to ‘slut-shame’ anyone, or to embarrass these passengers. We are on a plane with more than 100 people at one time, and you never know who you might offend if you’re wearing something with lewd remarks or obscene photographs. We are also helping to prevent anyone from being sexually harrassed on flights.” 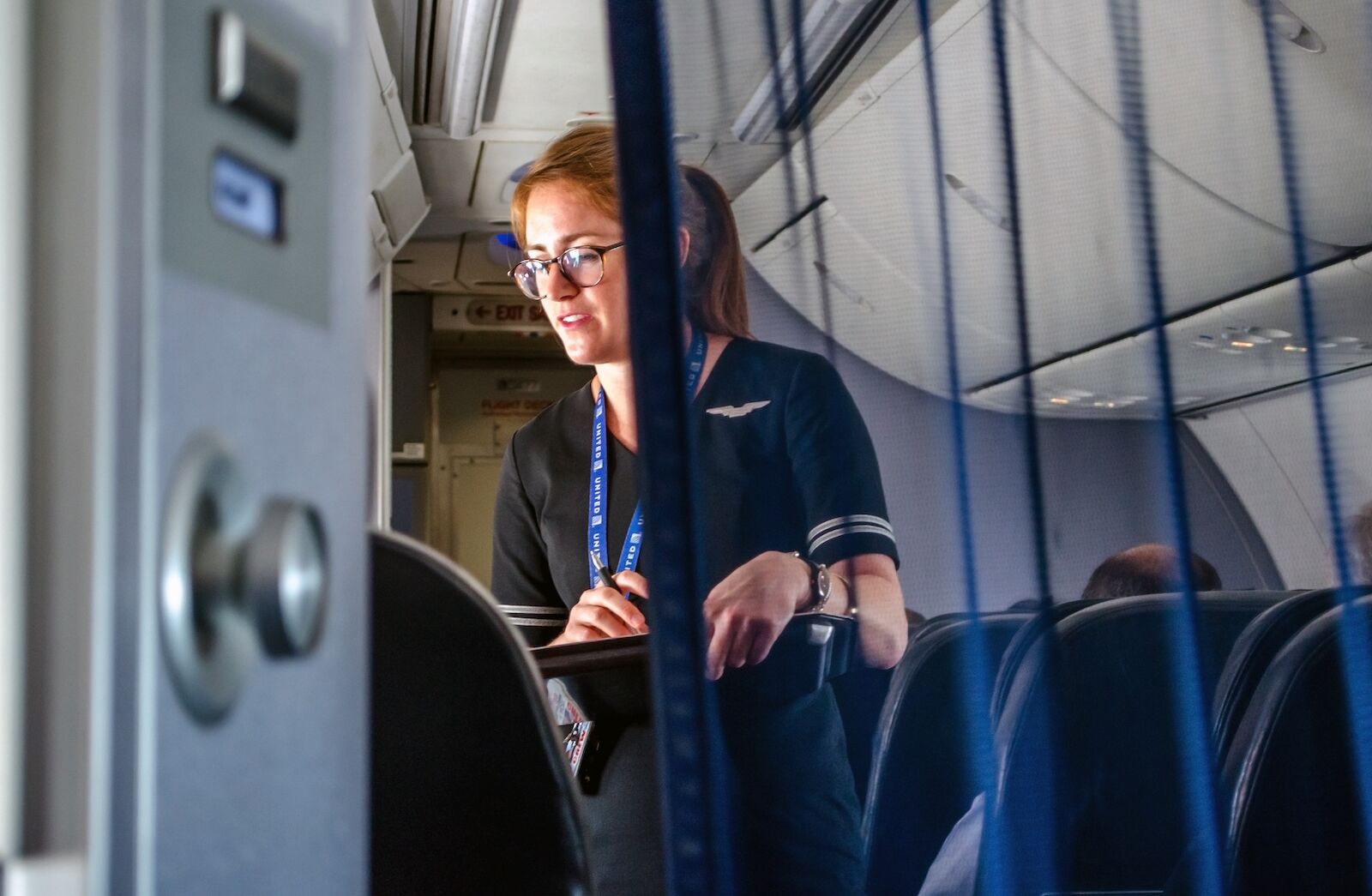 This isn’t a “rules for thee but not for me” scenario. Dress codes for flight attendants are much stricter than those for passengers.

“Dress codes for the flight attendant uniforms are pretty conservative,” Intan says. “We get checked every time we sign on for our flights. Failure to comply may result in us not being able to work that flight. On some airlines, we are required to use company-issued bags. No personalization (keychains, ribbons) is allowed, some airlines don’t allow digital watches, and all visible tattoos must be covered up. We must also keep our hands impeccable at all times. For the ladies, no chipped nail paints; men, no long fingernails.”

“Any staff traveling on discounted tickets are bound to a stricter dress code, regardless of the airline you may be flying for,” Intan says. “That means smart casual — no jeans, no collarless shirts for men, and avoid sneakers. Once, my shoes broke on the way to the airport on staff travel, and I had to change to a pair of sandals. They were not sloppy, and the ground staff was hesitant to let me board.”

And dress codes for airline staff used to be far stricter than they are now.

“When I first started flying for Delta in the 90s, not only did we have strict appearance guidelines, we used to have to stay within our weight limit as well,” Paddock says. “If we were over our max weight we would be first warned, then removed from in-flight flying status until we lost the weight.”

It didn’t end at weight checks, either.

“We also had appearance checks when we signed in for work to make sure we were fully in compliance with our appearance standards,” she says. “For example, long hair had to be pulled back in a bun, ponytail, or French twist. Hair could not fall beyond our chin when leaning forward. Jewelry had to be modest and earrings no bigger than a quarter.”

The specific airline dress code for passengers — and for flight attendants — tend to change over time. When it comes to figuring out what to wear on the way to your next vacation, just know that the airlines may be paying more attention to your outfit than you realize.

Airports + FlyingAirplane Etiquette You’re Probably Breaking, According To a Flight Attendant
Tagged
Airports + Flying
What did you think of this story?
Meh
Good
Awesome