That big trip you’re planning to take in the next few years could end up being much better for the planet than it would have been a few years ago — or even would be today.  That news comes from the Waypoint 2050 report from Aviation Benefits Beyond Borders, an international organization of airline industry partners that studies the economic and environmental impact of air travel.

Matador spoke with Yann Cabaret, the Vice President of strategy, product and marketing for SITA, to help dissect the report, airline emissions, and what this means for the average traveler.  SITA works with airlines to enact efficient operating systems to address carbon emissions in the aviation industry and achieve net-zero by 2050, largely based on the Waypoint report.

As a IT provider for the industry, SITA works to streamline operations for airports and airlines to make them more efficient. As boring as it sounds, the company’s systems allow its clients to be more eco-friendly by saving fuel and eliminating unnecessary logistics (ensuring the tech and systems on a plane are functioning in way that allows for the more efficient flight path, for example).

In our conversation with Yann, we asked him about the rumors that air travel will become more sustainable, and whether sustainable fuel is the wave of the future. We asked him when we can expect at least some of the fuel used in most commercial flights to be derived from sustainable sources and when he thinks air travel really will be net-zero.

Cabaret offered some background on the emissions of air travel and some good news. Progress is happening — and for an industry as large as aviation, that progress is actually happening at a decent place. Here’s a quick recap of his take on the industry.

How you’re flying is impacting the planet

We start with the impact that we as air travelers are already having on the environment. Commercial air travel currently accounts for about three to four percent of global emissions (via The New York Times), which is far fewer emissions than cars emit (ground transport accounts for about 20 percent of global emissions). Fortunately, sustainable aviation fuel — airplane fuel derived from renewable bio-based sources rather than fossil fuel — is already here and is being used in small quantities on select commercial flights.

However, Cabaret points to four key areas in which the industry needs to continue to address airline emissions in order to achieve net-zero by 2050. It’s a major goal for the industry, according to the International Air Transport Association (IATA). The areas are:

How the airline industry will become more sustainable, and airlines that are leading the charge

Now for the good news. According to Cabaret, the airline industry can reach net-zero emissions by 2050 by addressing the four points listed above. But it’s going to take a lot of work. Fortunately, a number of initiatives are in place to make this happen, and a few of the most well-known airlines in the US are leading the charge.

Cabaret says that the Waypoint 2050 report will serve as a roadmap for decarbonizing air travel, stating that success will be determined by product innovation scaling to meet market demand — basically, some of the stuff that will make flying more sustainable hasn’t been invented yet, but brilliant minds somewhere are working on it.

Bringing this new tech to life will take the support of the US government in implementing policies that favor research and development of greener technology, including laws that enforce strict emissions standards and/or place a tax on carbon. 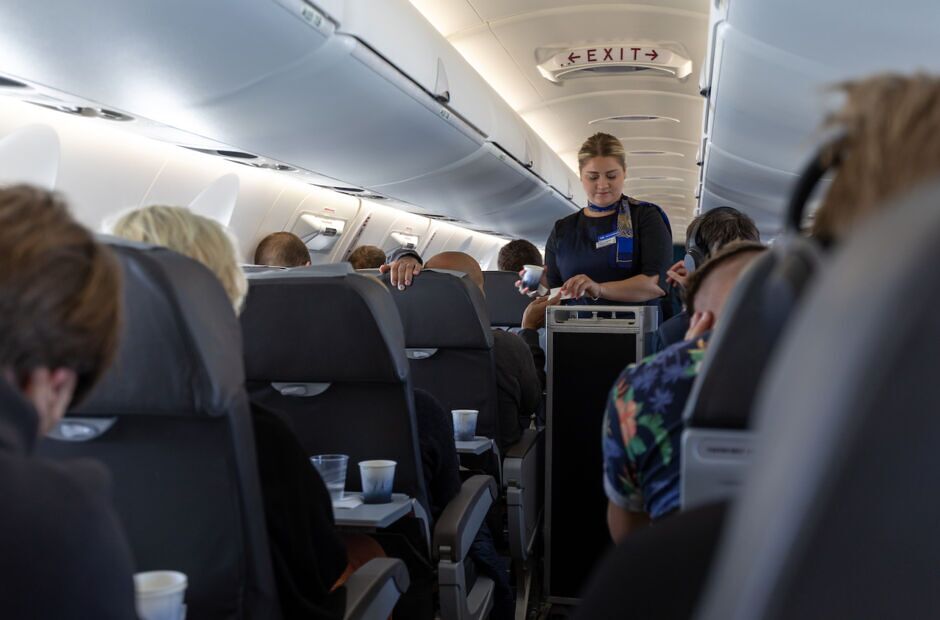 How you can be a more responsible flyer

The best way to minimize your own carbon impact is to fly economy. Economy seats take up less space, which allows for more passengers, which then decreases the number of flights needed. Economy tickets also generally require fewer services like full meals and drinks served in disposable containers, both of which contribute to the overall environmental impact of a flight.

Furthermore, flying with a low-cost air carrier can help to minimize those emissions because it’s likely that most seats, if not all, will be economy class. As counterintuitive as this may be to your personal comfort, it’s better for overall emissions.

Finally, do your best to fly direct to your destination, avoiding layovers whenever possible. Most of a flight’s emissions happen during takeoff and landing, so fewer take-offs and landings means fewer emissions spewing into the atmosphere. And of course, bring your own water and drink bottles, and carry reusable cutlery rather than using disposable options whenever possible.

For more, check out Matador’s guide on how to be a more sustainable traveler while flying.

Australia’s largest coal-fired power plant will close seven years early, Elektrek reported. The Eraring Power Station was due to close in 2032 but will now close in 2025, removing 2,880 annual megawatts (MW) of coal power from the country’s energy grid from the date of its closure.

Insect-based pet food may be coming to supermarket shelves, according to a report from Quartz. This would be huge in terms of making pet food more sustainable, as the industry is responsible for about 25 percent of emissions from meat production in the United States. The biggest hurdle appears to be convincing the general population that it’s palatable.

We close this week with encouraging news. The US met an Obama-era commitment to cut greenhouse gas emissions at least 17 percent compared with 2005 levels by 2020 (via E&E News). We still have a long way to go to reach net-zero by 2050, as President Biden has pledged, but in the interim, any good news is welcome.