Romania is mainly famous for one thing: Dracula. Bram Stoker’s vampire was supposed to have lived in a castle perched on a rock in the Transylvania region of Romania, making the region appealing to bookish visitors and those in search of some thrills. Nevermind the fact that the author never visited the country and that Bran’s Castle was picked as the residence of the blood sucker only because it vaguely fitted the description provided in the 1897 literary work. While Bran Castle is definitely worth checking out — no matter the reason — it is far from being the only one in the country. Romania is home to more castles, citadels, and fortresses than outsiders expect to find in this part of Europe. Here are nine of the most amazing castles in Romania you didn’t know existed. 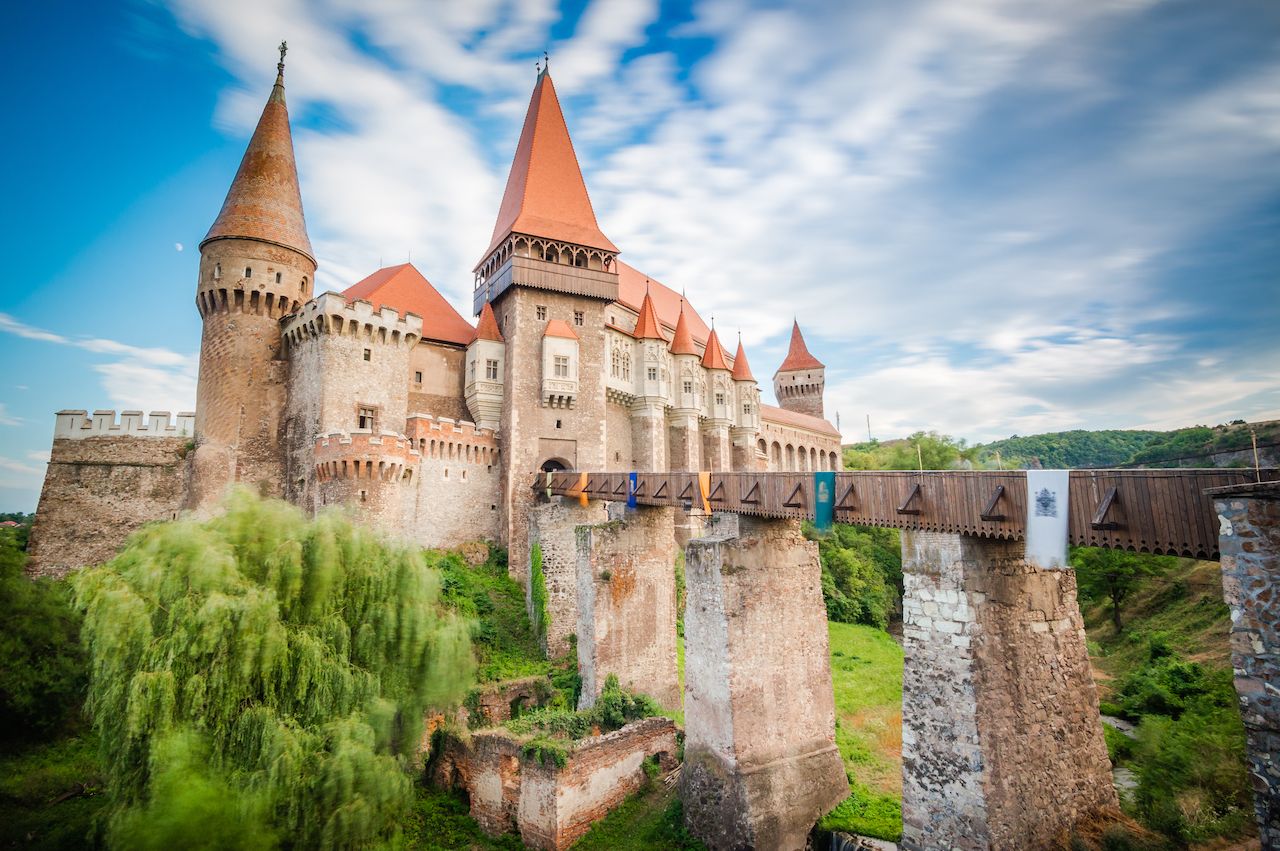 Once the residence of medieval Hungary’s famous king — Mátyás Hunyadi, also known as Mathias Corvin — the castle known as Hunyadi or Corvin Castle was built in its present form by János Hunyadi, his father and the ruler of Transylvania, in the 15th century. An architectural masterpiece of the Renaissance-Gothic style, it’s got everything you’d expect from a medieval castle — a drawbridge over a rushing river serving as a moat, high buttresses, inner courtyards, thick walls, tall towers and pointed turrets, bastions, and windows and balconies ornate with stone carvings.

One of the castle’s most impressive features is the Knights Hall, decorated in marble, featuring impressive octagonal columns and tall arches, housing armors, cannonballs, and a statue of János Hunyadi. Used as a dining hall on special occasions, it also served as a trial place for the enemies of the kingdom. Though surrounded by an industrial Communist-era town, the castle still has a true medieval feel and was used in recent years as a setting for movies like Ghost Rider 2 with Nicholas Cage filmed in 2011, among others. The castle is open for visitors, but times and ticket prices vary, so check the website before you go. 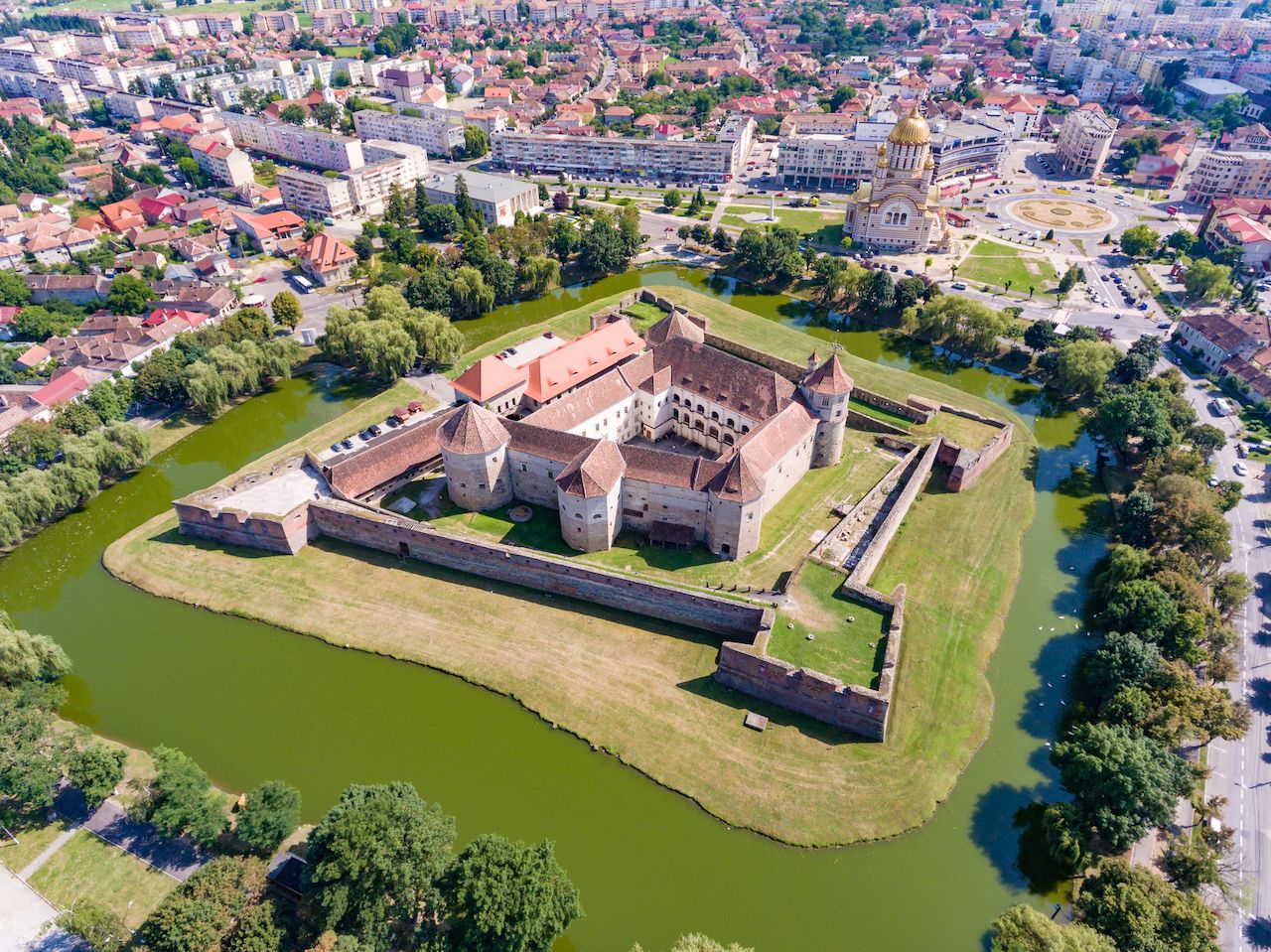 Sitting in the center of the town of Fagaras, surrounded by a moat inhabited by swans, the Fagaras Fortress was built in the 13th century. The fortress has seen its share of battles but has never been conquered. The surrounding, deep moat is only one reason for it; the fortified outer wall that came after it was also a serious line of defense while five towers protected the heart of the edifice. The fortress was used as a political prison during Romania’s communist years in the mid-20th century.

Though defense might have been the main reason for building the fortress, rulers of Transylvania also used it as their residence. They added elegance and luxury, though not much of this remains today. Still, its grandeur and architectural beauty merit a visit. Open for guests, the Fagaras Fortress has a large history museum. It’s open Tuesday through Sunday, but since hours vary, check the site for opening times. 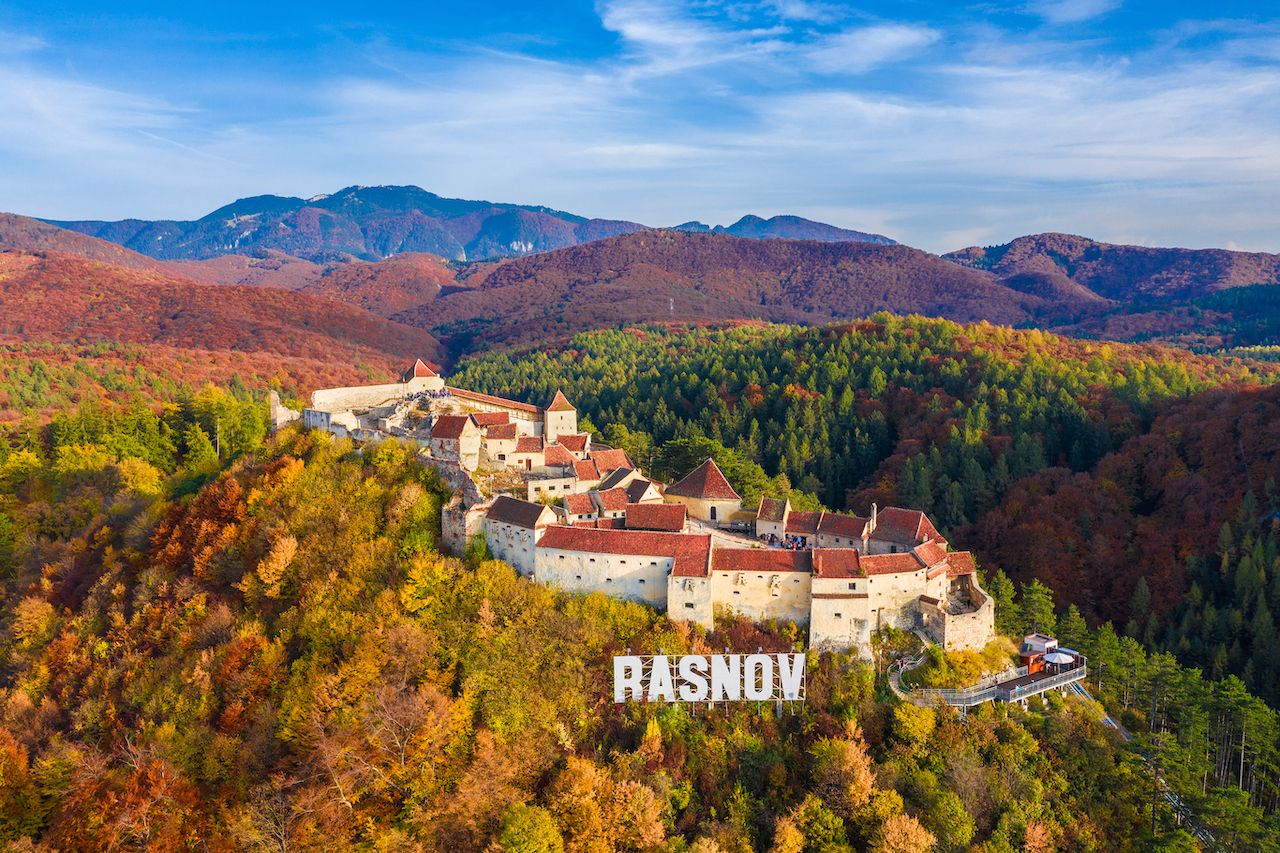 Perched on a rocky mountain top above a town of the same name, the Rasnov Citadel is all about defense. Built in the 13th century by the Teutonic Knights of German-Saxon origin, its main purpose was to protect the southern border of Transylvania from invasion of the Tartars. A peasant-citadel, the fortress was designed as a refuge for people of three villages, represented by the three roses on its coat of arms.

Surrounded by high walls, nine towers, two bastions, and a drawbridge, its architecture and location offered such a strong defense system that the Rasnov citadel was never conquered by force. It fell once to Transylvania’s own ruler when those living there rebelled against him. Today the Rasnov Castle is a major tourist attraction — as proven by the large, ugly, Hollywood-style “Rosnov” sign by the fortress — and it’s accessible by car, bus, or cable car from the town below. 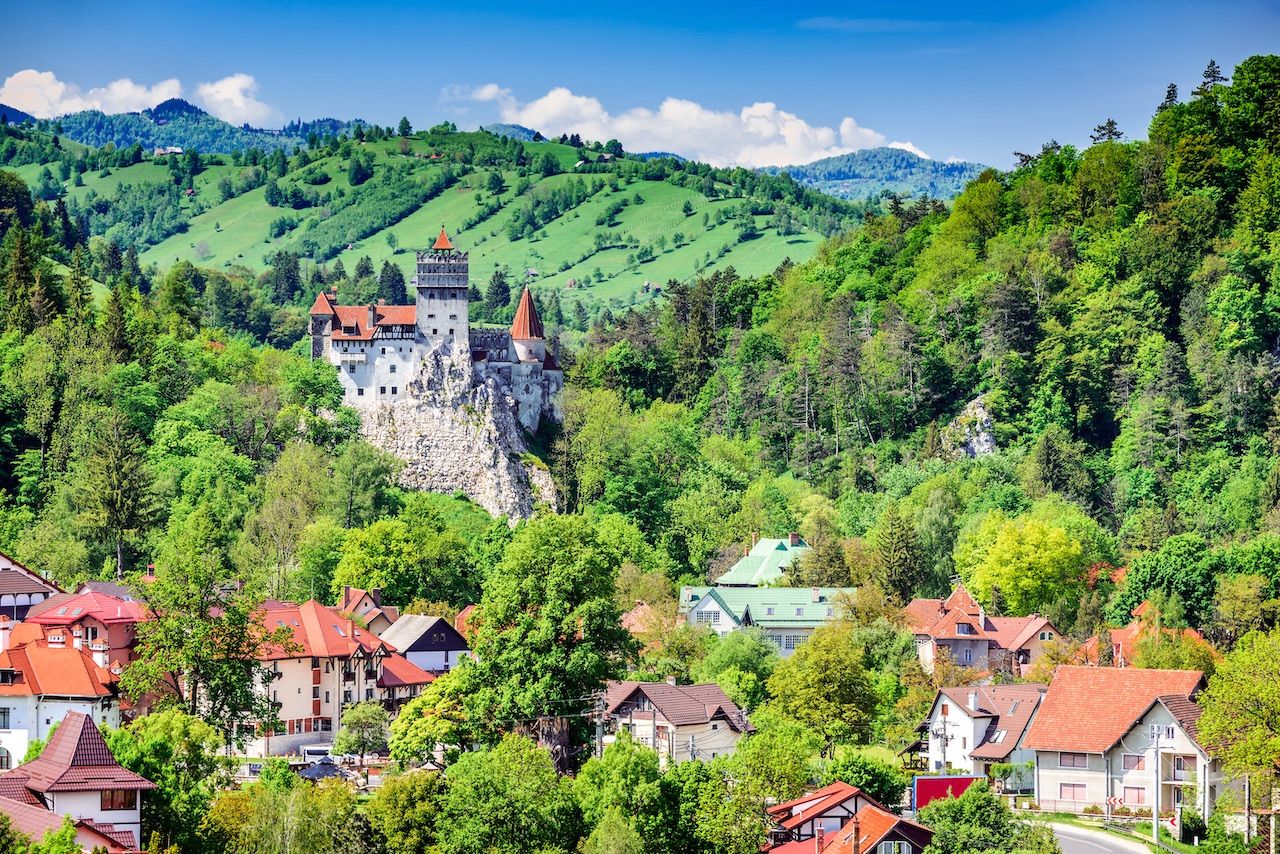 Bran Castle is the most famous and most-visited castle in the country, thanks to Stoker’s novel, Dracula. Even if you won’t find evidence of Count Dracula in Bran Castle, the castle is a neat spot to check out. Finished in 1388, it was built to defend Transylvania’s borders. Incorporating the rock it sits on in its design, it has unusual asymmetric towers and turrets. The present lavish interior is the work of Queen Marie of Romania, who renovated it and turned it into a royal summer residence, adding an elevator, a guest house, and other amenities after Transylvania became part of Romania in 1920. Inherited by her daughter, Princess Ileana, the castle became state property for a while when the communist regime took over in 1948. After using it as a museum until the fall of communism in 1989, the state returned the castle to Princess Ileana’s descendants, who still own it today. Open for visitors as a museum, it is a popular tourist attraction. 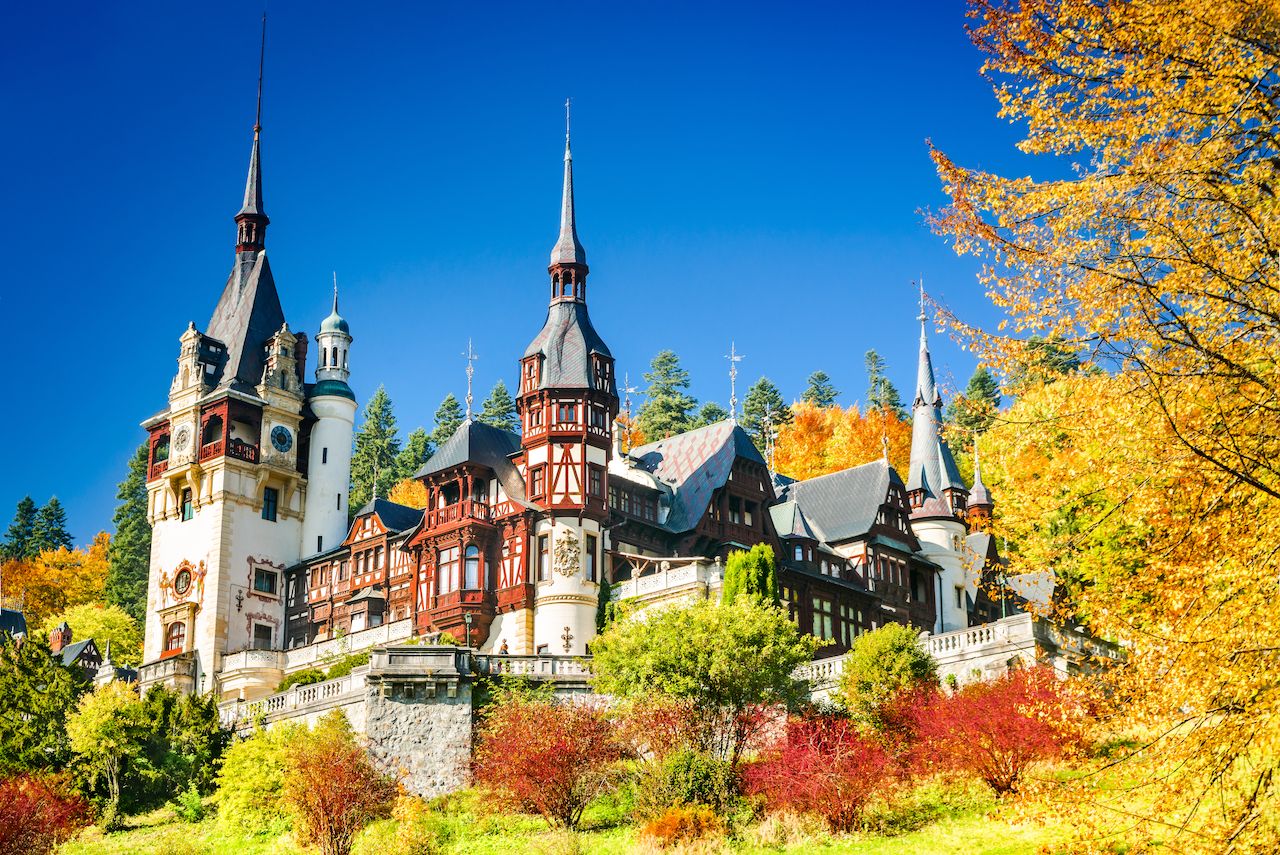 Peles Castle, built in 1875 as a hunting estate for King Carol I of Romania, sits in the middle of a lush green forest at the foothills of the Bucegi Mountains of the Carpathians. Used as a summer residence for the royal family, the castle has multiple towers and 160 rooms, many of them dedicated to different cultures — Turkish, Moorish, French and Florentine, among others. The castle hosts one of the most valuable collections of art, with over 2000 paintings, hand-painted, stained glass, and crystal chandeliers. But its most impressive collection is in the Armory Room, where 4,000 pieces of weapons and armor are displayed.

Fully powered by electricity produced by its own power plant, built in 1883, the castle had running water, both hot and cold; central heating; and a central vacuum system. It even had a small elevator for the royal family in the foyer. Its own 60-seat Royal Theater Hall, decorated with paintings and wall frescoes by world-famous Gustav Klimt, hosted the first film projection in the country. The castle became state property in 1948 as Communism came to Romania. Returned to the royal family after its fall, the descendant of the king kept it as home of the Peles National Museum. 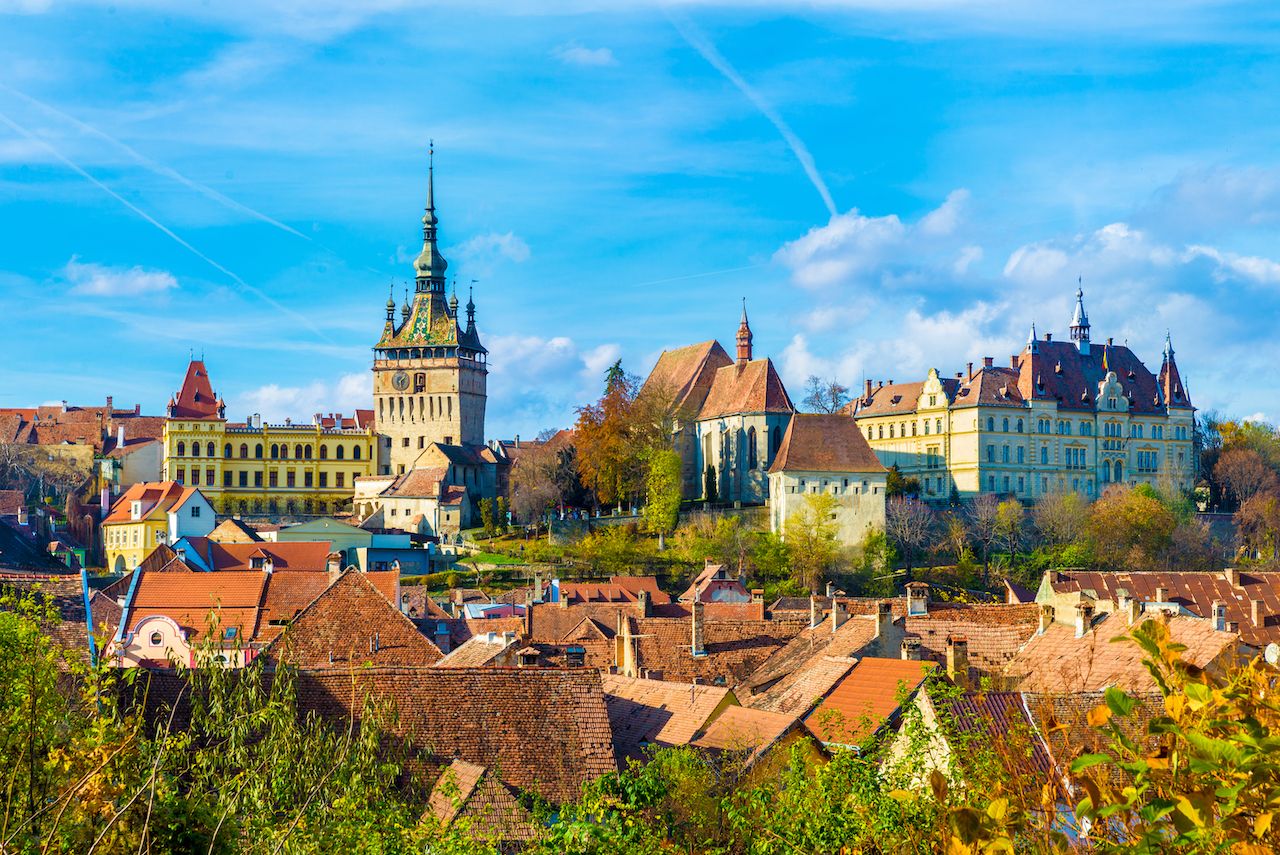 Still inhabited, Sighisoara is a beautiful and very well-preserved medieval walled city. Built in the 12th century, then extended and strengthened in the 15th, it was designed with defense in mind, featuring 14 towers and a few bastions. Nine of the towers still stand though not all are open to the public. Dominating the historic center at 210-feet high, the clock tower with its multi-colored tiled rooftop became the symbol of Sighisoara. Built in the 14th century by the city council, it was a simple gate tower until the rooftop had to be replaced following a fire in 1676. The Baroque rooftop as we see it today, with the colorful tiles and five turrets with bulbs, was finished in 1677. During the renovations, the clock, showcasing carved wooden figures, was added, as well as a meteorological clock that still predicts the weather on its highest, central turret.

The citadel enclosing the historic center of Sighisoara was named a UNESCO heritage site in 1999. Stroll through the town then visit the clock tower and the museum inside. Take a behind-the-scenes look at the clock with the wooden figures, and walk out on the balcony for a great view of the city. Though opening hours vary, you can enter the tower daily between 10:00 AM and 5:00 PM daily, except on Mondays, for a small fee. 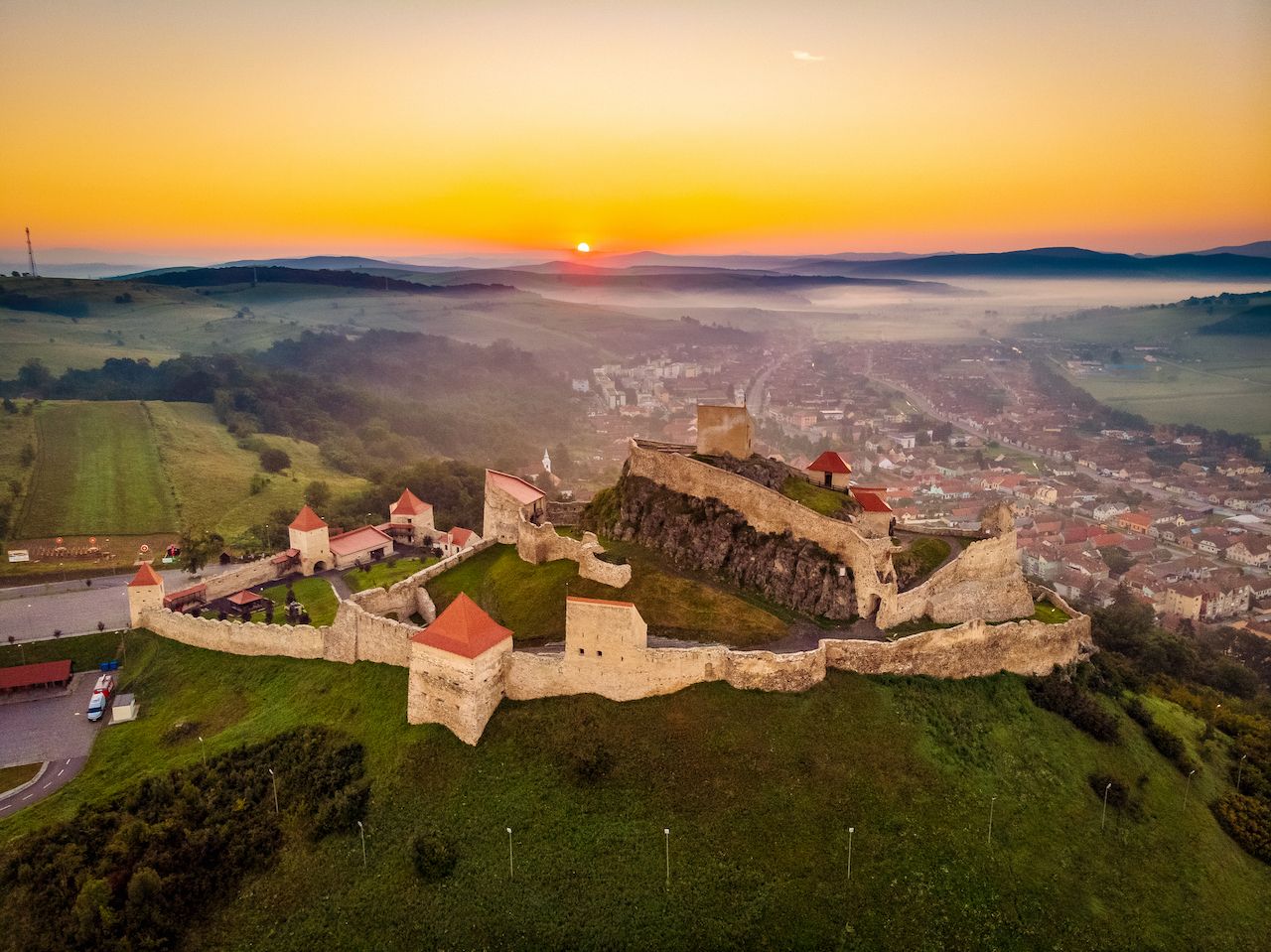 Built in the 13th century, perched above the town with the same, the Rupea Citadel spirals the hill it sits on like the shell of a snail. Built for three stages of defense, it features the lower, middle, and higher citadels, each with its own walls, towers, and inner buildings. With 10 square and pentagonal towers, characteristic for the region, the citadel was built to offer long-term refuge to the villagers in time of siege.

Though looking at it you’d think the citadel was impossible to conquer, it fell into the hands of the Turks a few times. But it wasn’t the enemy who demolished it. A devastating fire burned it down in 1643, and the Transylvanian Saxons who had built it, abandoned it. A few years later, in 1790, a severe storm demolished it further, and it sat abandoned for a few centuries. During the communist years, it was ready to be demolished so as to mine the basalt underneath, but since it proved to be too much work, the citadel survived. Reconstructed in 2013, it is open for visitors. 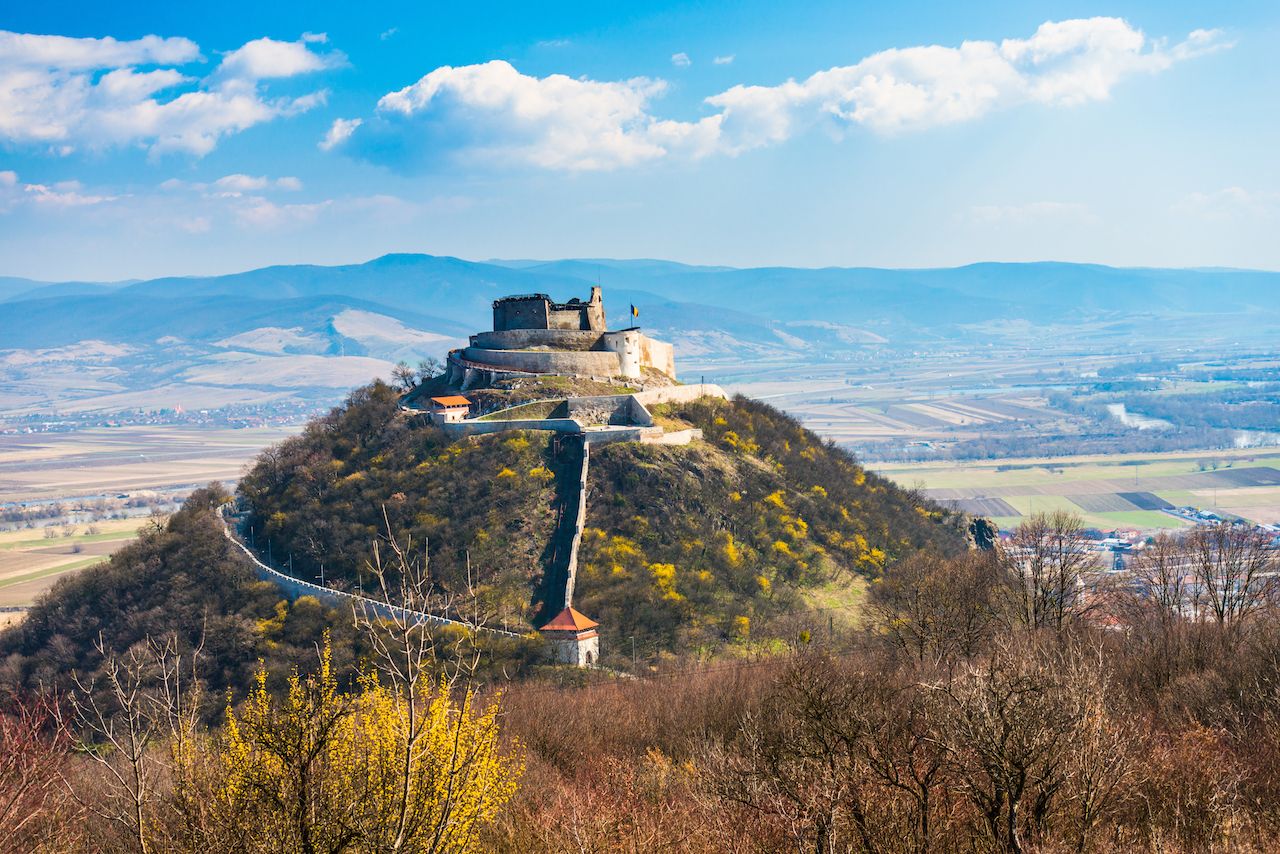 The medieval Deva citadel, dating from the 13th century, sits on top of an ancient volcano in the Western Carpathians. Though a small citadel, Deva was important in stopping invasions of Transylvania because of its location overlooking the Mures River and the surrounding valley. Its long history involves being the property of kings and queens, princes and princesses of Transylvania, changing hands often, though Turks also conquered it. In the second half of the 17th century, it lost its military importance and became a prison. By the end of the 18th century, it was auctioned off, and the new owner took everything of value and left the citadel in disrepair. Though sitting in ruins, the citadel saw one more battle during the 1848 Hungarian fight for independence from the Habsburg rule. The citadel can be visited anytime, and there is no entrance fee. You can either hike up to it on a path through the surrounding protected forest or take a cable car up the hill. 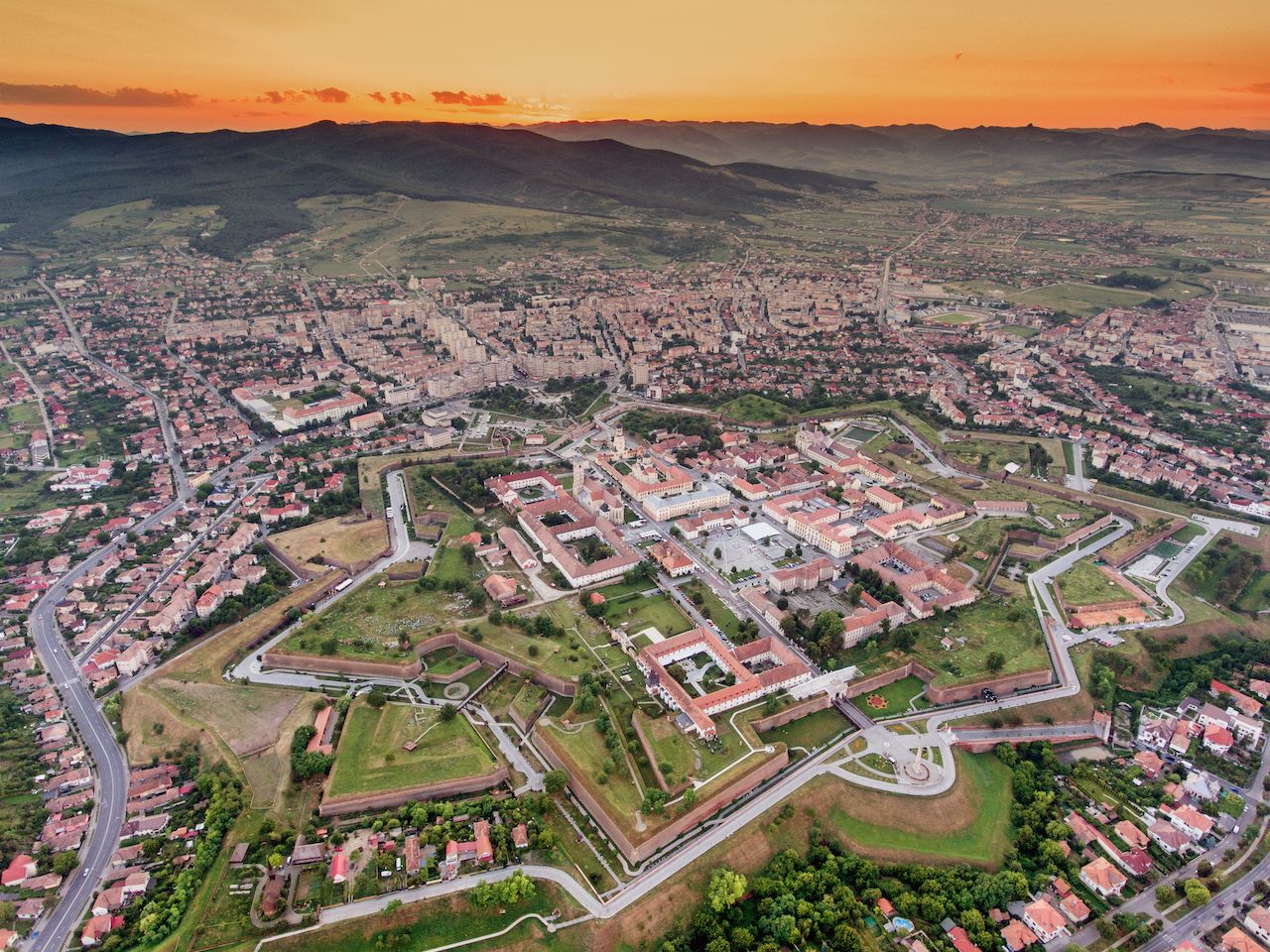 In its present form, dating from the beginning of the 18th century, the Fortress of Alba Iulia is one of the most beautiful examples of Vauban-style military architecture. Featuring seven bastions connected by walls of the same height, the inner fortress, also called the curtain wall, was designed to follow the shape of the terrain it sat on — in the case of Alba Iulia, this resulted in a shape of a seven-cornered star. Entrance to the citadel was possible through six richly ornamented gates, placed on the defense lines. But this impressive fortress was the third on the site, expanding an older one, dating from the 10th century, which stood on the site of an even older one, dating from the Roman times. During Romania’s communist years, the fortress fell into total disrepair; however, in recent years, most of it was restored, and today you can walk through three of its original gates.