The Lunar New Year is one of the most joyous celebrations in East Asia. Around 1.5 billion people celebrate by exchanging little red envelopes, lighting firecrackers, and, of course, sharing decadent meals. Like many other Lunar New Year traditions, the celebratory cuisine is entrenched in symbolism and superstition, as both a dish’s name and how it is prepared can have auspicious insinuations. In 2021, the Lunar New Year begins February 12. Try these lucky eight dishes to welcome a prosperous new year. 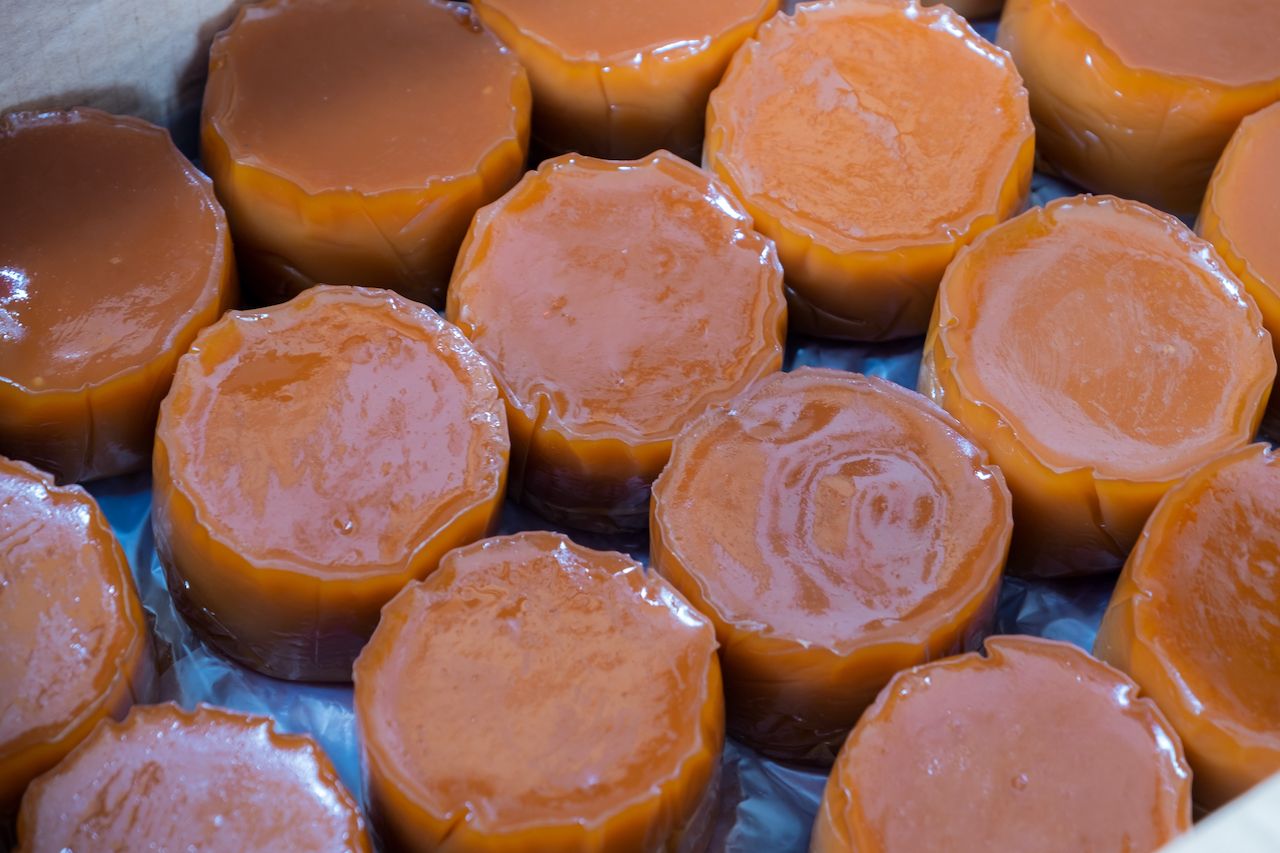 Nian gao is a dense, gooey glutinous rice cake. It’s a classic example of a Lunar New Year food that has its fortuitous symbolism derived from its homophone. Nian means both sticky and year, and gao can be both a confection or “to grow or be tall.” So nian gao means both “sticky cake” and “year growth.”

The metaphorical growth can include personal wealth, career advancements, or even a growing child’s height. The glutinous rice flour in these treats make them delectably dense and chewy, like something between mochi and a blondie, and different regions have their own variations. Nian gao can be studded with sweet red beans, chestnuts, or Chinese dates. In some cases, they’re lightly fried to give the edges a slight crisp. 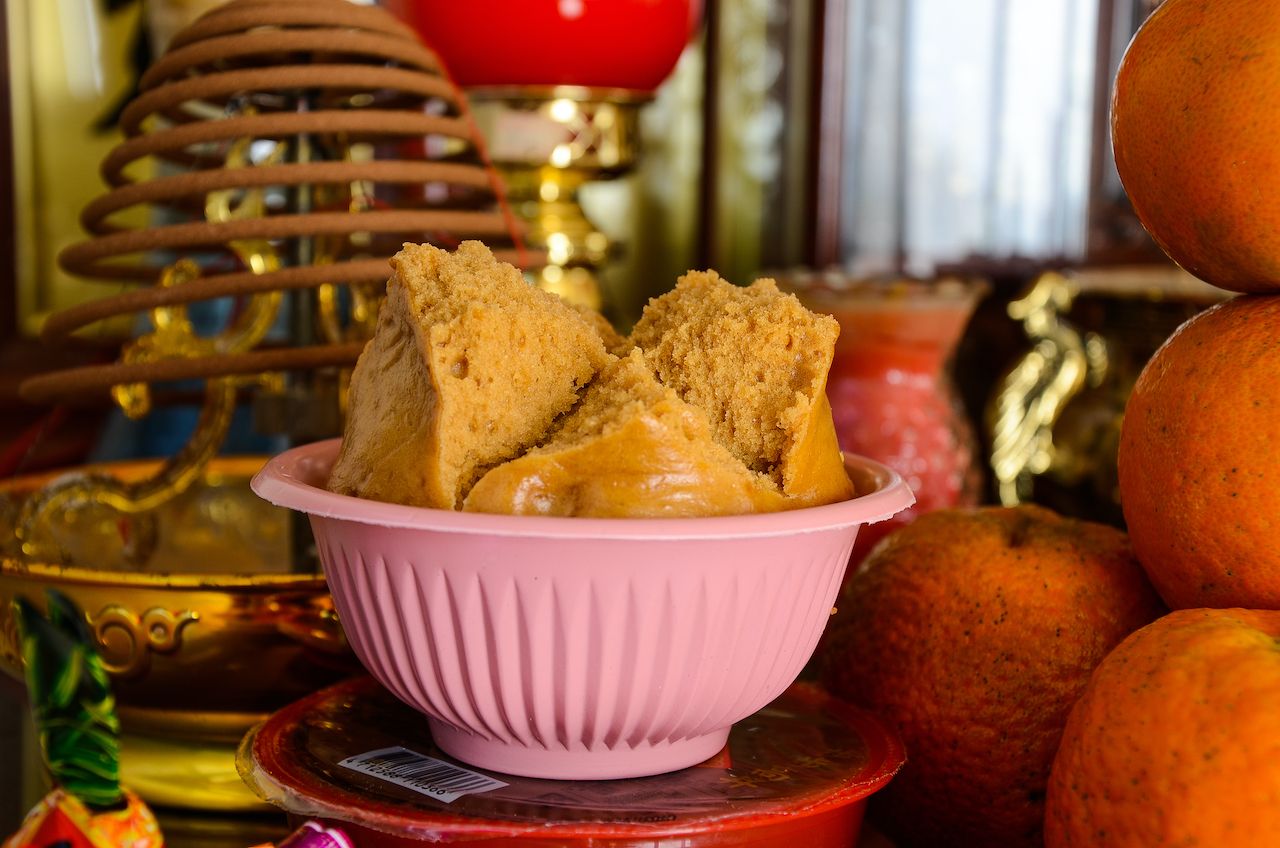 Fa gao are deliciously sweet, airy little steamed rice buns. Like nian gao, fa gao also has an auspicious homophone. Fa in Mandarin means to rise or expand, since the dough leavens into a luscious little poof, and it’s also a metaphor for growing in prosperity. Fa gao are usually made with rice flour, giving them a delicate sweetness and a spongy texture. They can be colored tan with Chinese dates, but for the Lunar New Year they’re often crowned with a red dot — the lucky color of the new year. 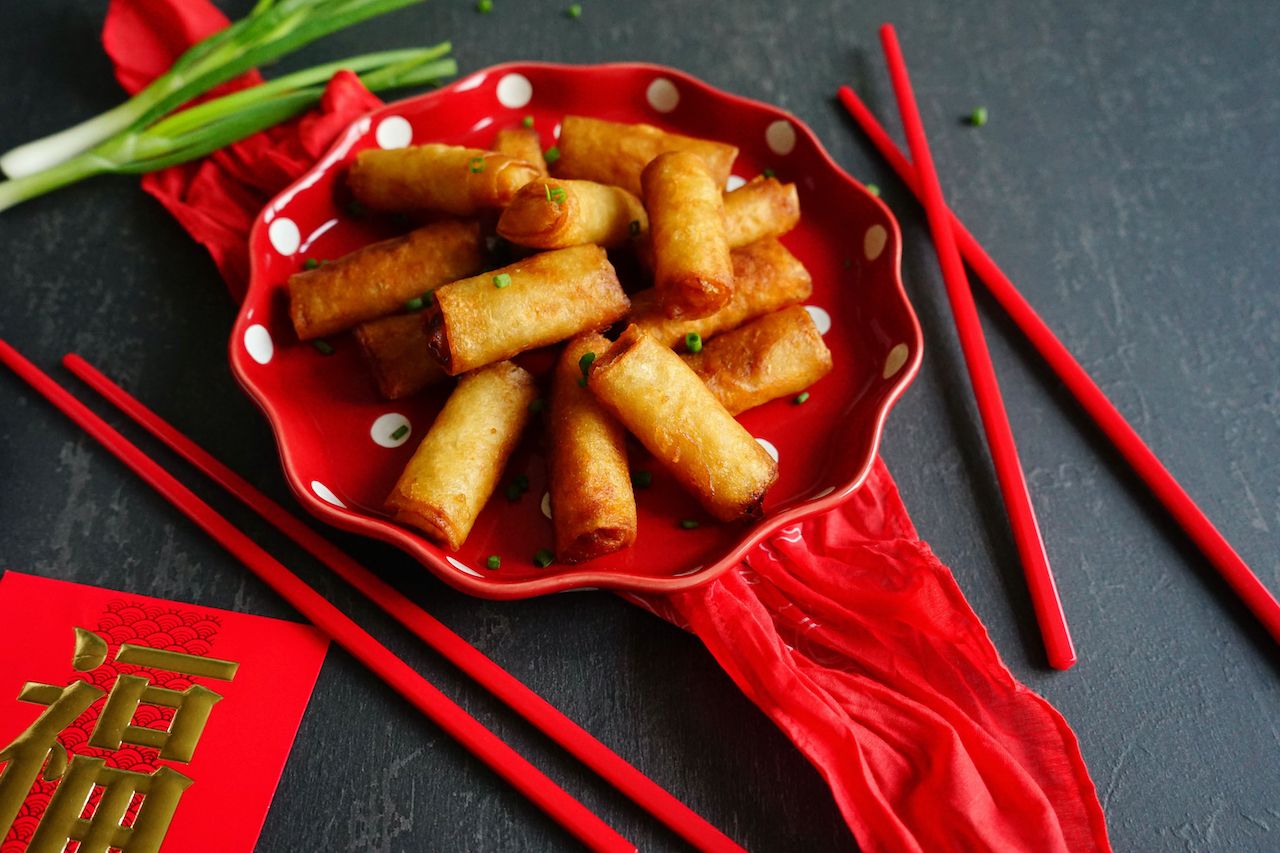 Spring rolls are a mainstay appetizer in many Chinese restaurants. The dish likely originated from before the Tang dynasty (618-907). The “spring dish” was originally a layer of vegetables presented on top of a thin pancake to welcome the arrival of spring. During the 14th century, these became a small bundle of ground meat and veggies that were popular among both imperial elites and the common classes. Today, spring rolls are eaten to bring in the new season and because the golden fried outside resembles gold bars. Fillings for spring rolls vary regionally but usually contain chicken or pork, cabbage, carrots, and bean sprouts. 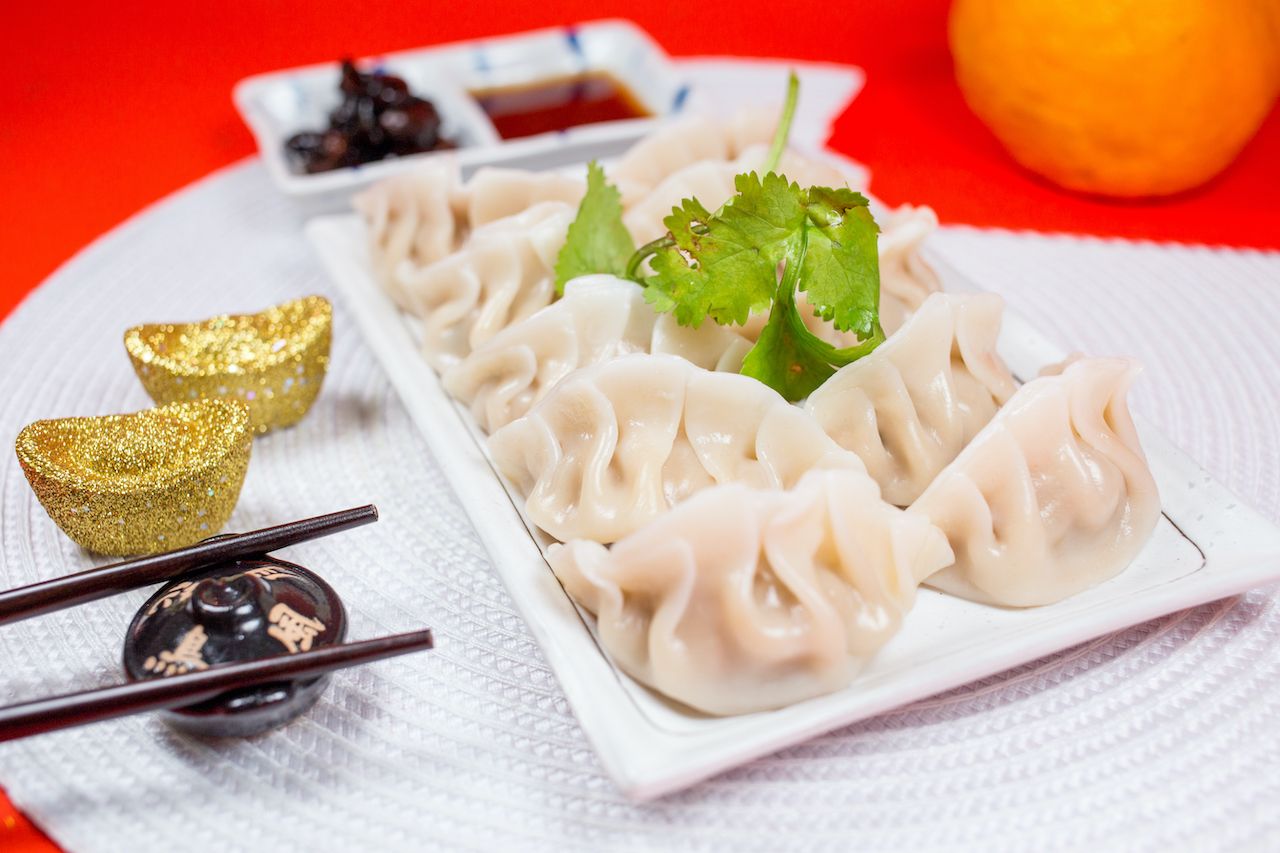 Dumplings are a staple in northern Chinese cuisine, but around the Lunar New Year, they become especially pertinent. Dumplings are supposed to look like silver ingots, so eating dumplings are considered to bring wealth and prosperity. The more you eat, the better. The Mandarin word for dumplings, jiaozi, also sounds like exchanging the old for the new, and it’s therefore symbolic of the new year. Dumplings come in an array of different fillings, but during the new year avoid eating dumplings with pickled veggies as they foretell a difficult future. Rather, opt for dumplings with cabbage or radishes for radiant skin and good cheer. Some households will also hide a special thread or a gold coin in the dumplings. Whoever gets the lucky thread will be blessed with a long life, and the gold coin signifies good fortune. 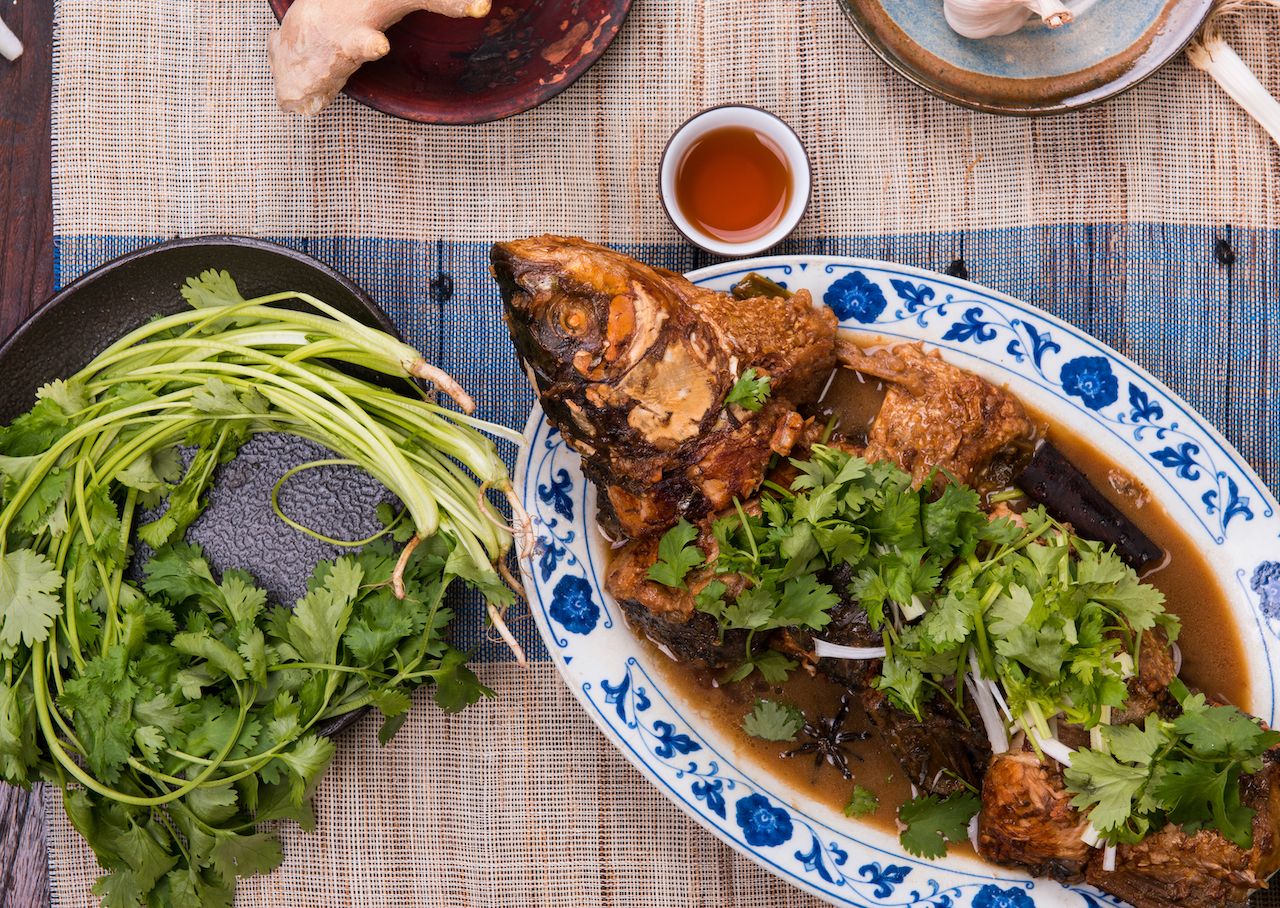 Whole fish is one of the most auspicious foods of the Lunar New Year, and fish make appearances at more than just the dinner table. The word for fish, yu, also sounds like “surplus” or “extra,” so fish have become a common symbol for wealth and abundance. You’ll find depictions of fish in Lunar New Year decorations, and gifting a whole fish can be a fortuitous present for the new year. The whole fish is also a symbol for family togetherness.

Carp or catfish are usually served for Lunar New Year’s Eve, and they can be steamed, braised, or boiled with ginger, vinegar, and soy sauce. For extra good luck, serve the fish head facing your guest of honor. Some households also save half the fish for the next day to represent wealth and abundance flowing into the next year. 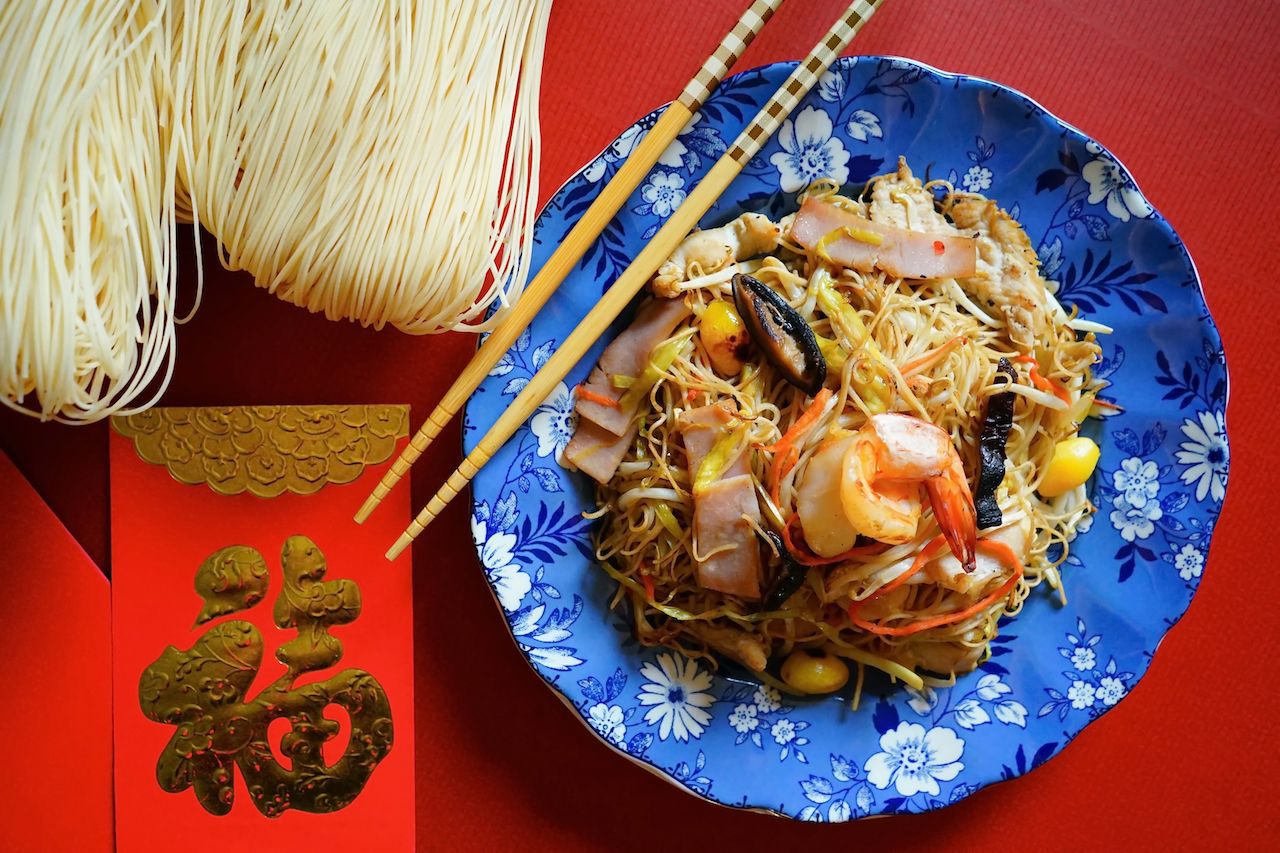 Long noodle strands, metaphorically speaking, represent a long life. The longer the noodle, the longer the life, so haute cuisinieres may prepare a dish out of a single long noodle. Generally speaking though, longevity noodles can refer to any above-average-length noodle. There’s no specific recipe for these, but longevity noodles are usually relatively thin (think one size up from a ramen noodle) and stir-fried with chicken, mushrooms, or greens. For a fun game you can try eating the noodles without biting down on and incising them with your teeth. Instead, try slurping them up Lady and the Tramp style. Birthdays are also a good time for longevity noodles. 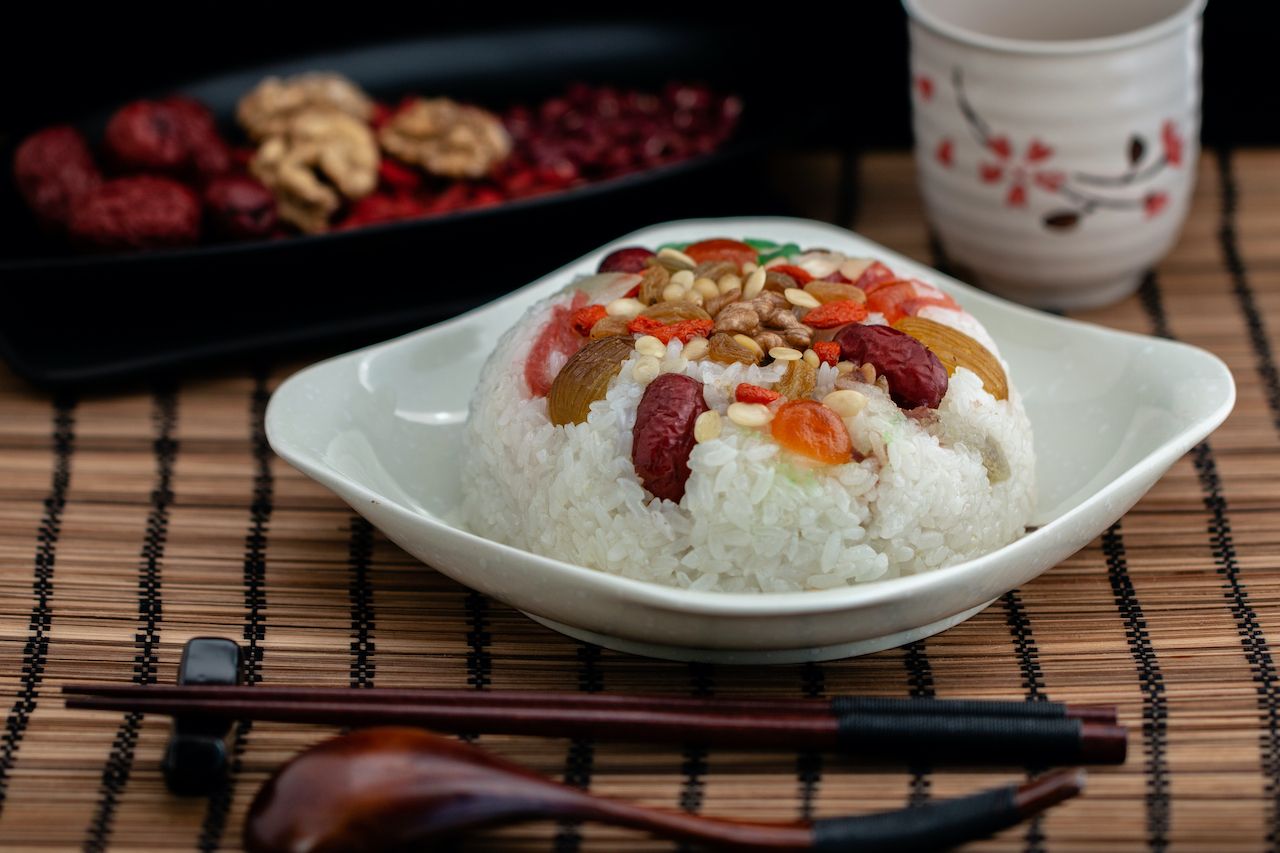 Eight treasure rice pudding is a dazzling confection of sweet sticky rice layered with red bean paste and decorated with eight different “jewels.” These eight treasures are an assemblage of dried fruit, nuts, and seeds. According to Chinese superstition, the number eight, ba, sounds like fa, which means prosperous. Some think that the dish stems from ancient origins to honor eight legendary warriors, while another theory posits the dish was created in the 19th century to impress the Qing Dynasty dowager empress. Eight treasure rice pudding is usually made with dried goji berries, jujubes, lotus seeds, or wintermelon, but if those ingredients aren’t available, the dish can be improvised with whatever is on hand. 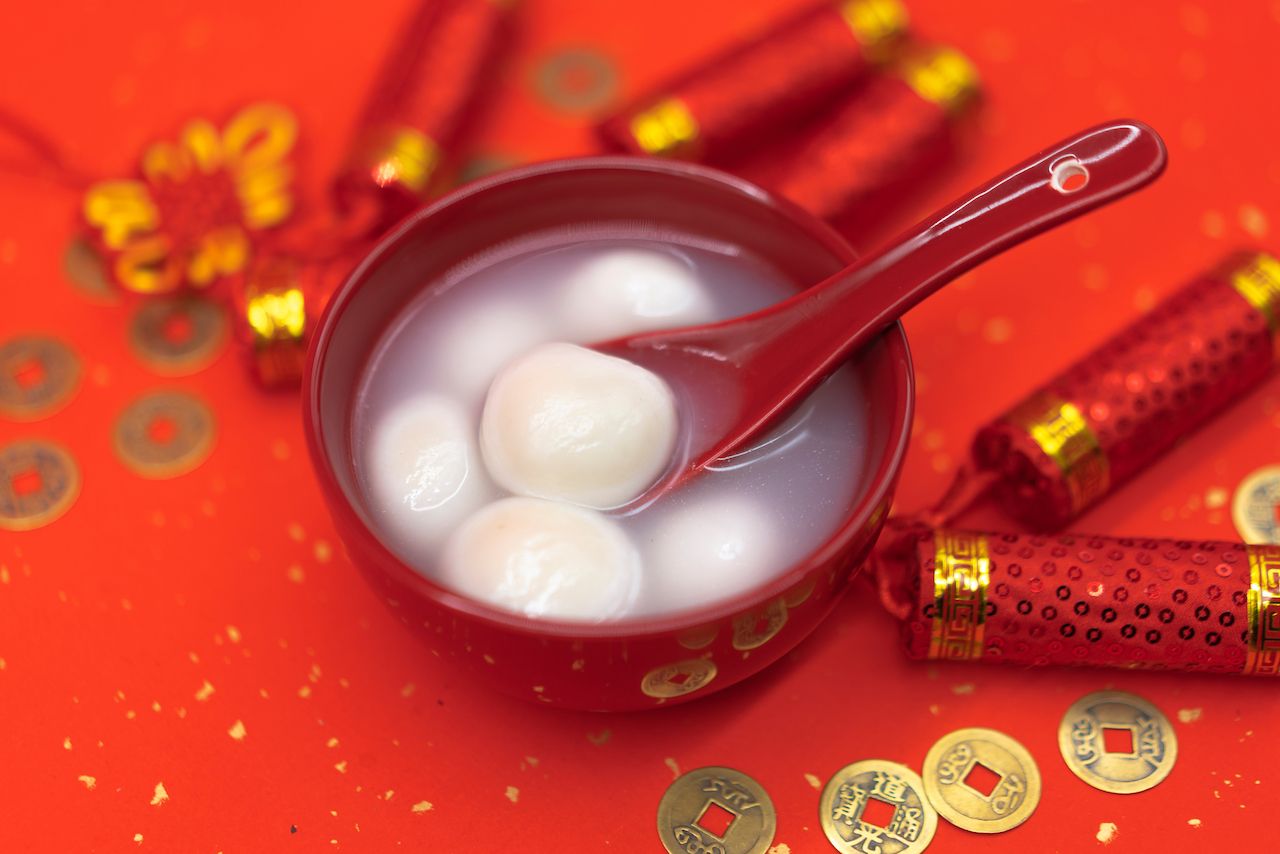 Tangyuan, sometimes known as yuanxiao, is a dish of squishy little mochi-like balls filled with red bean paste, black sesame paste, or crushed peanuts that are served in a broth flavored with osmanthus, ginger, or a sake-like fermented rice pudding.

According to one folk legend, a young girl named Yuanxiao was taken from her home at a young age to cook for the imperial court. She desperately missed her family, and a kind court minister happened upon her weeping. He promised he’d try to reunite Yuanxiao with her family, and in doing so, he impersonated a soothsayer and spread the rumor that the God of Fire would rain down on the capital with a blazing inferno on the 15th day of the lunar calendar. In order to appease him, the people had to set off firecrackers and decorate with red lanterns. Additionally, the Fire God’s favorite food was tangyuan, which should be prepared as an offering. Yuanxiao’s family was invited to the capital to partake in the festivities, and the adorable little baubles have symbolized family togetherness ever since. This dish is usually eaten during the Lantern Festival, the final day of festivities of the Lunar New Year.