Teatime isn’t supposed to be a chemistry lesson. It’s supposed to be about sipping tea and snacking on deliciously sweet cakes, discussing simple things. The words “oxidation” and “molecules” don’t usually enter into the conversation.

But when your tea is slowly turning bright purple, it’s hard not to ask questions.

This is what happens when you order the special green tea at Chalet de tia Mercês in the tiny village of Furnas in São Miguel, Portugal. Here, owner Paula Aguiar has set up shop inside a volcanic cauldron, where she uses geothermally heated water straight from the ground to make her tea. This not only turns it bright purple but also effectively makes it one of the few places in the world where you can safely drink tea sourced from volcanic water. 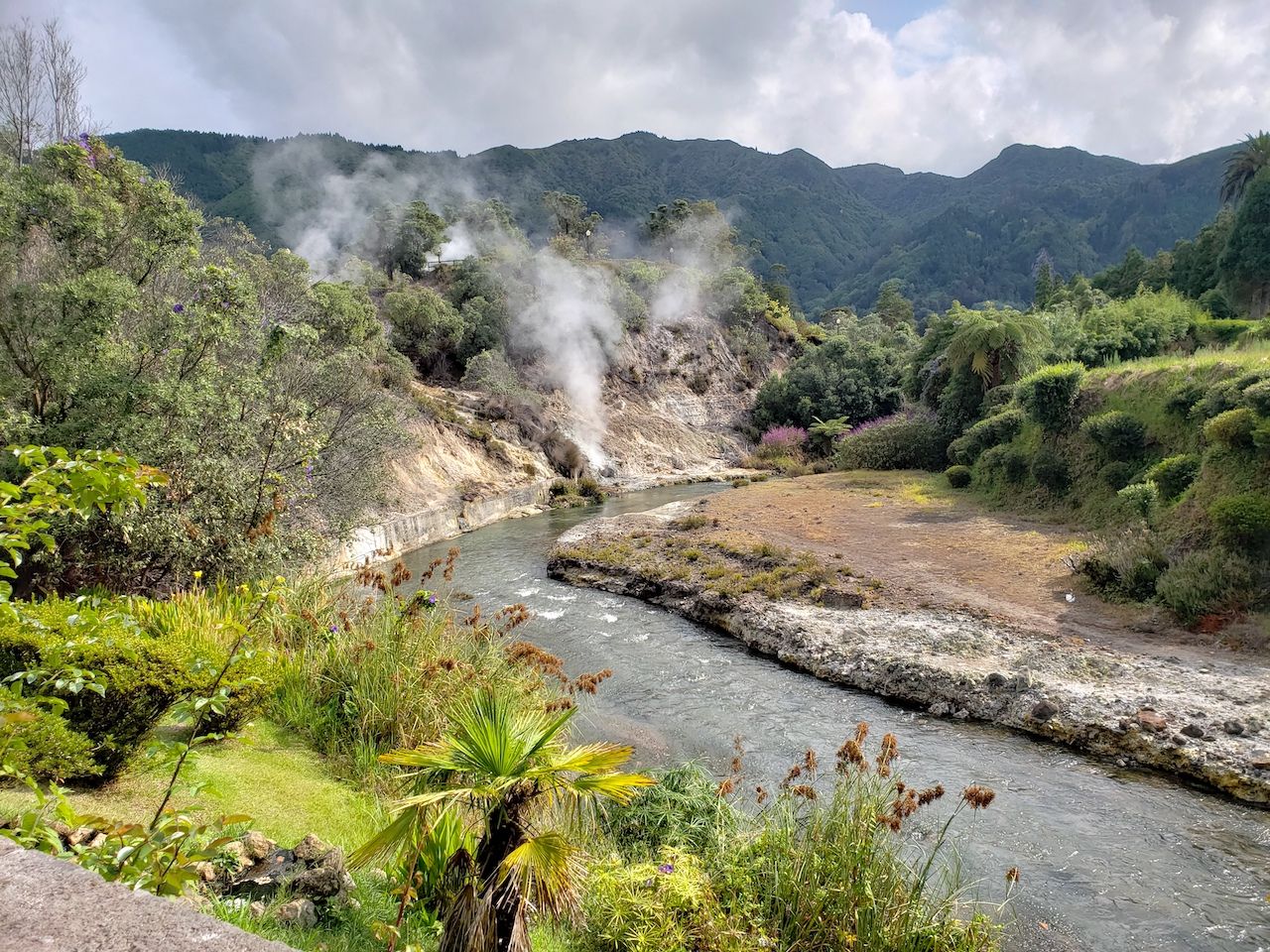 A city inside a volcano.

The name “Furnas” tells you all you need to know about this town, set literally inside an active volcano cauldron on the largest of Portugal’s Azores Islands. It’s a literal steam bath of a city, where geysers line city streets and steam fills the air with a warm fog.

It might boast the world’s only volcanic food scene, most famous for its Cozido das Furnas — a stew of pig’s ears, chicken, vegetables and other delicacies cooked underground for hours by the volcano’s heat. Farmers in Furnas boil whole ears of corn in the bubbling waters then sell them for a euro on the corner. And down a little flight of stairs from the winding, steamy main road, you’ll find Chalet de tia Merces and its straight-from-the-ground green tea.

The shop opened in a former 19th-century bathhouse built by a wealthy local merchant as part of his summer estate. It’s set atop a winding tropical river with lush foliage and steam rising from both sides. A towering volcano stands in the distance, a fierce warning that at any moment it may turn this peaceful scene into complete mayhem.

Aguiar tells her assistant to prepare the “special tea,” a green tea harvested from the island’s sprawling Gorreana tea plantation — the only one of its kind in Europe. The assistant dutifully pours a pot of green tea from boiling water inside the shop, then brings it outside along with another, empty pot.

“Follow me,” she says, taking the empty pot with her to a wall on the side of the courtyard. On the wall, a spout of hot water extends from a pipe used to service the bathhouse 150 years ago. As the pot slowly fills, the water turns from clear to light violet.

“That’s the same tea I poured you inside,” she says. “But the water here comes straight from the ground and reacts with the iron in the water and turns it this color.”

I take a sip; it tastes a little like liquid clay.

“Wait a few minutes,” Aguiar tells me as we walk back towards the view over the tropical river. “Wait for it to really react; you’ll taste a different flavor each time.”

I taste test it against the tap-water tea, which is now a deep shade of gold. It tastes, as one might expect, like tea.

As we wait for the volcanic tea to react, she explains that it looks different because the antioxidant molecules in the green tea — you know, those things that make it so healthy — react with the high levels of iron in the volcanic water. The iron changes their structures, so they now refract light in a different wavelength, showing a brilliant shade of violet instead. She likens it to the effect of a prism.

I try another sip as the water turns lavender. Now it tastes a little like tea, with a heavy dose of clay. 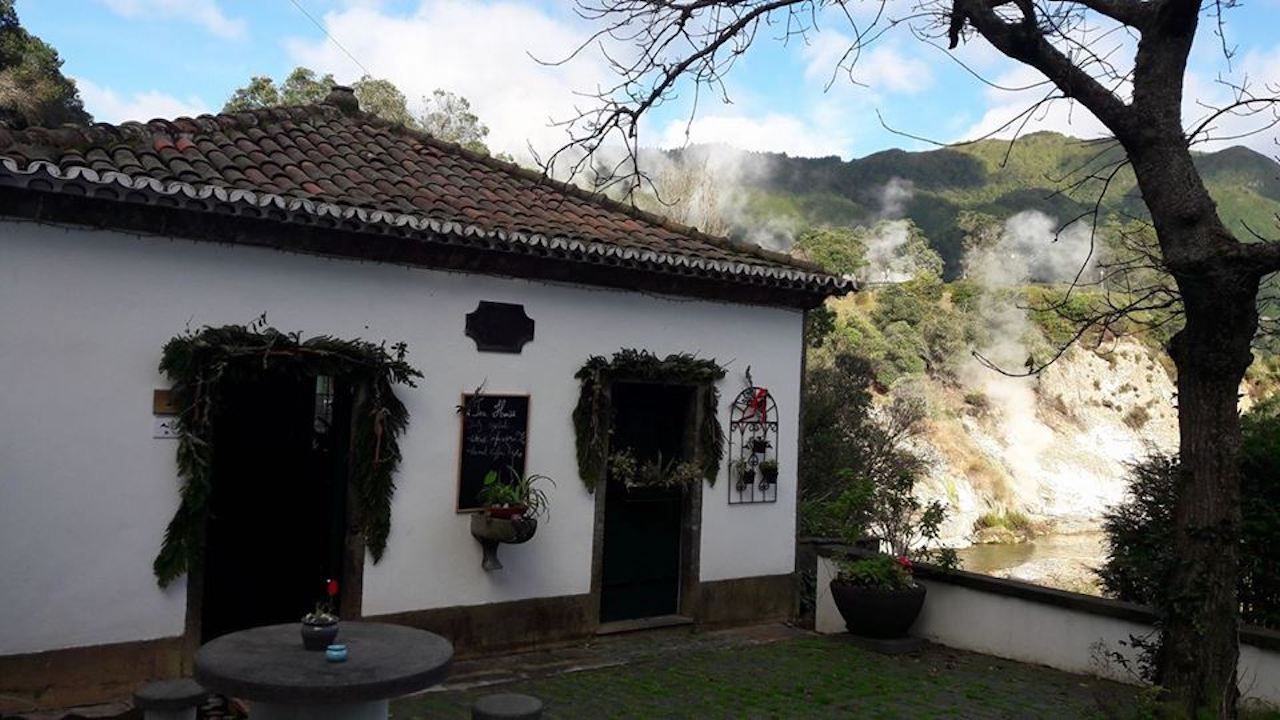 As we watch the sun peek through the clouds and highlight the volcano an electric lime green, Aguiar explains that her chemistry lab of a coffee shop is no accident. She has a degree in Biology with a masters in Environment and Evolution, along with an MBA and a Ph.D. in Environmental Sciences. She’s a college professor, having taught at Portland State in the US among other places, in subjects ranging from natural resource management to strategic development based on endogenous resources.

“I’m working with Azores University now to study tourism impact and strategic development, to balance bringing in environmental tourism and maintaining our resources,” she says matter of factly. In a place that’s on the verge of becoming the next Iceland, finding ways to preserve all the things people come to see is critical.

The shop is a prime example of the kind of small business the Azores will need to develop tourism without ruining its authenticity. Beyond the volcano tea, the shop has only-in-Azores stuff like São Jorge coffee, one of the hardest blends to find in the world. It also has cheeses from across the cow-filled islands, local wines, pastries and Portuguese muffins from local bakeries, and cordials from local distillers.

Aguiar not only has relationships with all her suppliers, but she can also tell you stories about all of them if you have time.

A few minutes later and my tea looks something Prince would have drunk. I take another sip. Still clay, but now it has a deep, earthy tone to it as well, like drinking the meat of the earth with a soft overtone of tea. This is the flavor Aguiar says I should be looking for. I take a bite of my cinnamon-covered Conde de Praia, a potato-based pastry native to nearby Terceira Island. Paired with the tea, it tastes like apple pie. I have another sip and relax, watching the light reflect through my purple tea to the green mountains and blue sky beyond.

Aguiar talks to me for nearly an hour about how she’s trying to help preserve the natural beauty and authentic feel of the islands while still encouraging people to come and visit. Her shop is the kind of place that could become an overcrowded tourist attraction should Sao Miguel start drawing visitors by the millions. But on this quiet Thursday morning, only one other person has bothered to stop by. And, like the Azores themselves, I choose to drink it all up before anyone else does.