Confession time: it’s been a year since I last boarded an airplane. Longer since I’ve flown internationally. Sitting in various stages of lockdown for 14 months, pretending to enjoy jigsaw puzzles and delusionally believing Duolingo would make me fluent in French, I fantasized about what my triumphant return to travel might look like. Each time, it resembled a scene from Heart of Darkness — an intrepid, harrowing adventure that would more than compensate for my sedentary months in front of the TV. Well, when international borders finally reopened to US citizens, I identified more with Bilbo Baggins than Marlow. My travel muscles were heavy with rust, and I had gotten used to my hobbit hole. That’s why, when I had the chance to take a relaxing wellness trip to Baden-Baden, Germany, I jumped on it quicker than a hobbit on pipe-weed.

Baden-Baden, in the German state of Baden-Württemberg, is known for its thermal baths and relaxing location on the doorstep of the Black Forest. Its spas made the town a popular health and wellness retreat in the 19th century, and that tradition continues today, attracting visitors from all over Europe and overseas in need of a mental and physical breather. Ritzy spas are as ubiquitous in Baden-Baden as restaurants serving Schnitzel, but with the Black Forest a 10-minute walk away, you can also plunge into nature’s healing embrace without spending a dime. Here’s why Baden-Baden is the perfect low-stress travel destination to help you shake off those travel cobwebs.

A wellness state of mind

Confession number two: I’m completely incapable of relaxing. Our hyper-competitive, fast-paced, results-oriented culture often makes it difficult to disconnect from responsibilities and truly unwind — even on vacation. Baden-Baden was different. The city’s slow pace of life and wellness-centric attitude sets a tone that lulls even the most hyperactive mind into a state of calm. 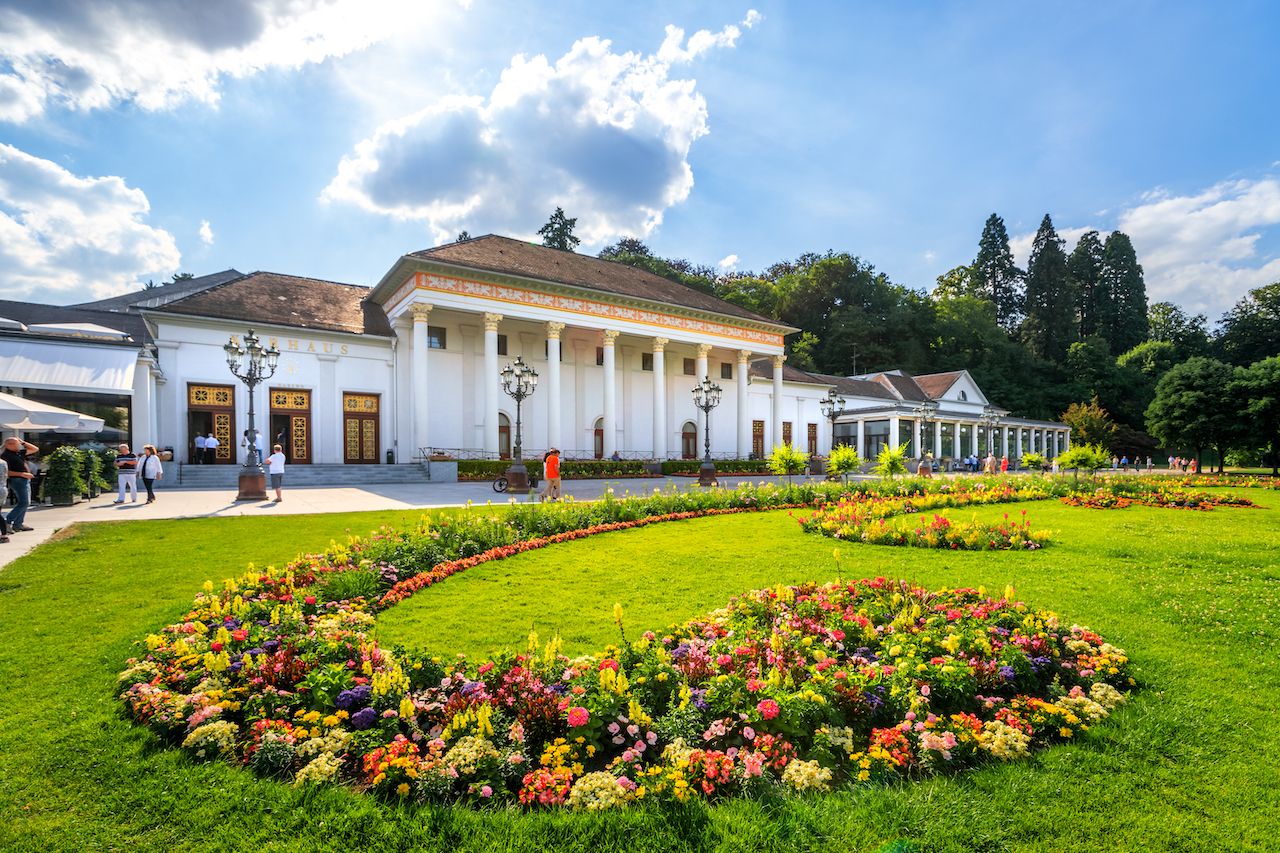 To feel this, you don’t have to stay at one of Baden-Baden’s upscale spa hotels. One of the city’s most stately buildings is its public Trinkhalle (drinking hall), built in the 19th century for residents and visitors looking to drink from Baden-Baden’s curative thermal waters. Lined with Corinthian columns and mythologically-themed murals, the hall’s impressive promenade was a gathering place for 19th-century elites, who would come here to socialize and drink from the hall’s spring. You won’t find the original spring anymore, but fountains remain — here and elsewhere around the city — bubbling with waters that are said to have healing properties.

Indeed, Baden-Baden was one of the most popular medical tourism destinations in Germany in the 19th century. Drinking, inhaling, or bathing in the city’s thermal springs was rumored to minimize the symptoms of cardiovascular diseases, metabolic conditions, and rheumatism, and people came from all over Europe to soothe their ailments. While thermal waters and spa treatments aren’t proven medical cures, people still flock to Baden-Baden for preventative care and holistic treatment. And these treatments aren’t limited to spas and thermal springs, either. The Salina Sea Salt Grotto is a man-made cave whose walls are completely covered in sea salt from the Dead Sea and the Himalayas. Visitors go there to inhale the sea salt deep into their lungs, which is said to cure various respiratory illnesses and skin conditions, strengthen the immune system, and improve physical and mental regeneration.

To be completely honest, though, you can inhale all the salty air you want but nothing is better for mental regeneration than taking a stroll through the Black Forest. The practice of “forest bathing” rose to prominence in Japan in the 1980s, but it’s actually a tradition dating back thousands of years. The goal of forest bathing is to relieve stress and clear your mind by completely immersing yourself in nature. That could mean taking a leisurely stroll through the woods, going for a quiet, introspective hike, or simply sitting on the ground and meditating. For the residents of Baden-Baden, forest bathing is a facet of everyday life. It takes less than 10 minutes to walk to the Black Forest from the center of town, and there are dozens of hiking trails through the forest. The 28-mile Panorama Trail in particular, winding through woods, orchards, and past waterfalls, was designated the most beautiful hiking trail in Germany in 2020.

Get naked for a good cause

Baden-Baden is filled with well-heeled visitors sporting jackets and dresses you couldn’t afford with three months’ salary. Even if you’re not spending your nights at the lavish Casino Baden-Baden — Germany’s answer to Monte Carlo — the city’s amenities can feel a bit prohibitive to those who don’t have thousands to wager on a hand of blackjack. Public spas are the great equalizer. The Friedrichsbad and Caracalla spas are the two main public spas in Baden-Baden, and both offer visitors pampering at a reasonable price. 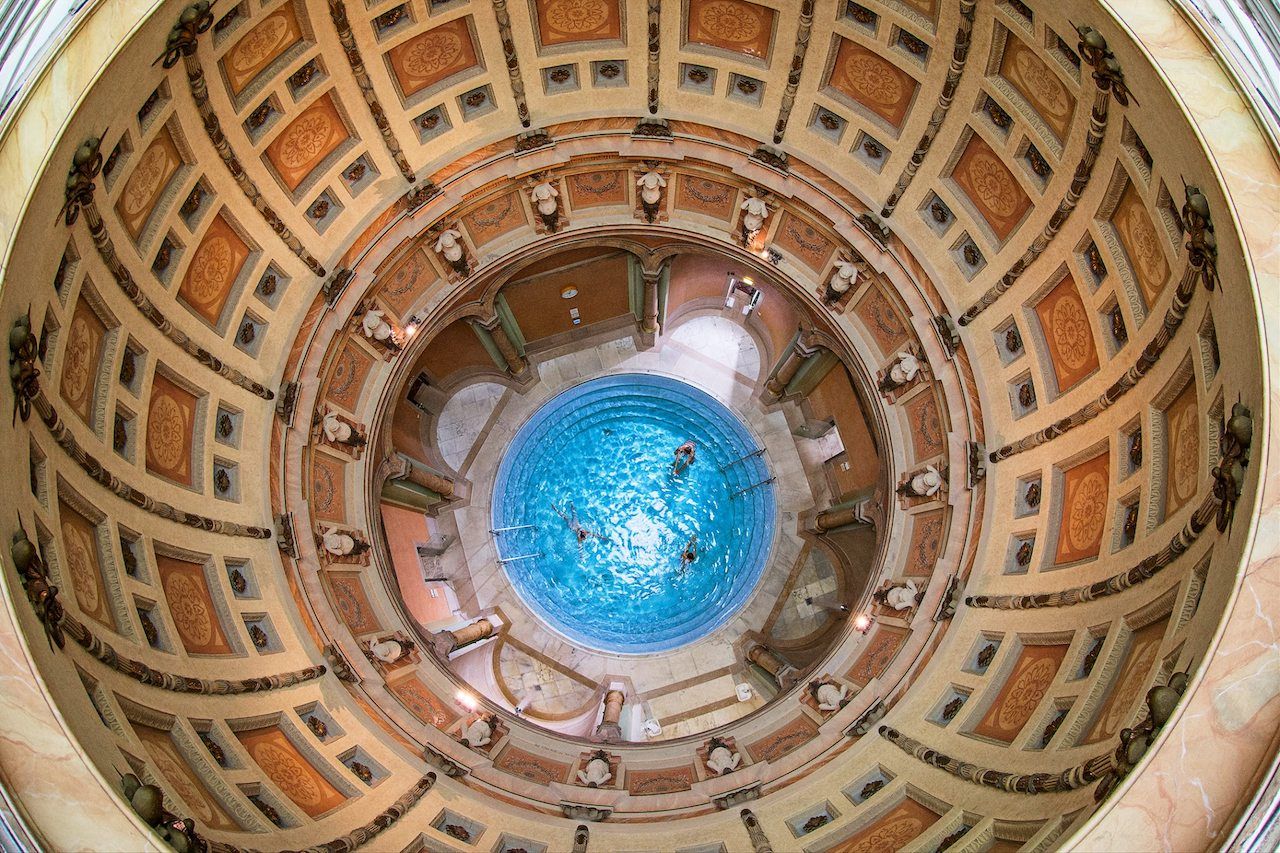 Friedrichsbad Spa is visually impressive, built in the Renaissance style in 1877. With a grandiose domed hall, artistic frescoes, and baths modeled after the Roman and Irish tradition, this temple of relaxation is also a trip back in time. The spa has 17 different stations, including pools of varying temperatures, showers, a soap and brush massage, steam, whirlpool, exercise baths, and a relaxation room. All 17 stations can be used for a fee as low as $45. Be advised, however, that while swimsuits are permitted, bathing at Friedrichsbad traditionally takes place in the nude. 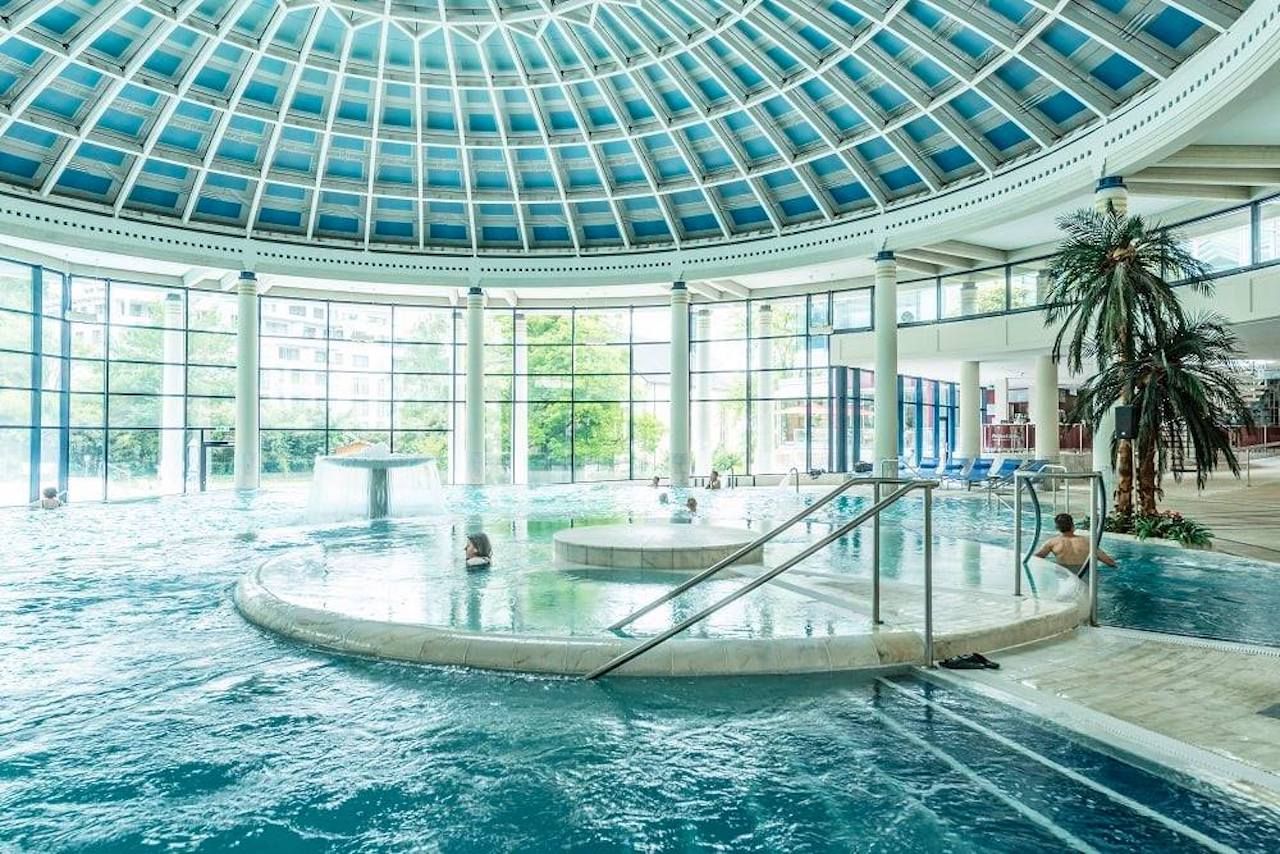 For an even more budget-friendly experience, head over to Caracalla Therme, also located in the heart of Baden-Baden. For just $17 per person, you can take advantage of this more modern spa’s indoor and outdoor baths, pools of varying temperatures, and whirlpools. An extra $5 will earn you entry to the (clothing-free) sauna. The mineral-rich thermal waters of both Caracalla and Friedrichsbad originate from a depth of 1.2 miles underground and are heated to between 90 and 154 degrees for maximum physical stimulation and relaxation.

Lifestyles of the rich and relaxed

Okay, I have a third confession to make: I’ve never enjoyed massages. Big surprise for a guy who’s incapable of relaxing, right? Massages always felt like something the government might do to extract information from terrorists. You might be loose and limber afterward, but only because you just endured the painful pulverization of muscles you didn’t even know you had. The world-class spas of Baden-Baden changed my perception.

A hotel spa isn’t something you’ll find at the local Holiday Inn, but in Baden-Baden hotel spas are commonplace — and offer the best treatments you could ask for. The Royal Spa at Hotel Maison Messmer is a Romanesque space defined by its frescoes and columns. There’s an indoor heated pool illuminated by a light shining through a glass cupola, and saunas and steam rooms where you can repose (naked or clothed) after a swim. The spa also offers massages, facial treatments, and even microneedling procedures for the stimulation of collagen production.

Brenners Park-Hotel and Spa is the pinnacle of luxury in Baden-Baden. Looking more like a palace than a hotel, Brenners has a cigar lounge, billiards room, a resident cat named Cleopatra, and played host to dignitaries like Bill Clinton and the Dalai Lama. The place isn’t cheap, but unlike many luxury offerings these days, you actually get what you pay for. 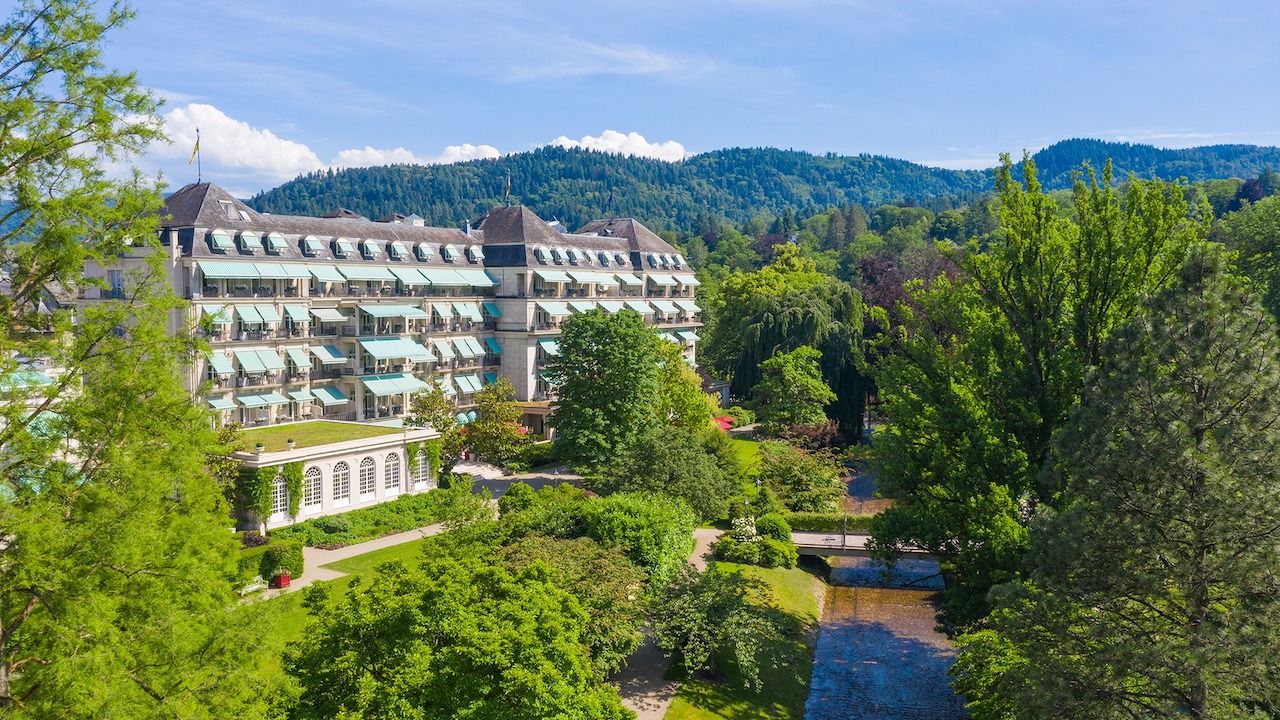 The hotel spa is Villa Stephanie, a sprawling five-floor house of indulgence with a sauna, indoor pool, plunge pool, treatment rooms, gym, and patio with views of a lush private park. The spa specializes in preventative medicine, employing its own nutrition coaches and doctors who create customized menus for guests, and fitness trainers who will craft individualized workout routines. It’s impossible not to feel relaxed inside Villa Stephanie, but even the ambient music and soothingly-dimmed lighting didn’t ease my skepticism about receiving a massage.

“You are nervous?” my masseuse asked, perceptively.

“Not nervous,” I said, “I just have trouble relaxing sometimes.”

He didn’t answer, as if tacitly communicating that he sees people like me all the time, and knows exactly how to handle us. Indeed, he did. Rather than feeling like I should tap out of a hold, or confess to a crime I didn’t commit, I actually enjoyed the experience and didn’t want it to end.

“People come to Villa Stephanie from all over the world,” he said. “They like Baden-Baden for its calm and quiet. And we’re right next to the forest. It’s hard to relax in America, yes? Here, it’s easy.”

Germany might not be the first country that comes to mind when you envision a wellness retreat, but its spa offerings go far beyond just Baden-Baden. Also in the Black Forest region you’ll find Bad Wildbad and Badenweiler. Bad Wildbad, a small town with a population just over 10,000 is known for its Palais Thermal spa. Built in 1847, the spa is the epicenter of the town’s bathing tradition, offering pools, saunas, and steam baths inside a Moorish-inspired building. Badenweiler, on the western edge of the Black Forest, is another health resort and spa. Many visit the town for its warm mineral springs, picturesque setting, and sprawling Cassiopeia Therme spa. 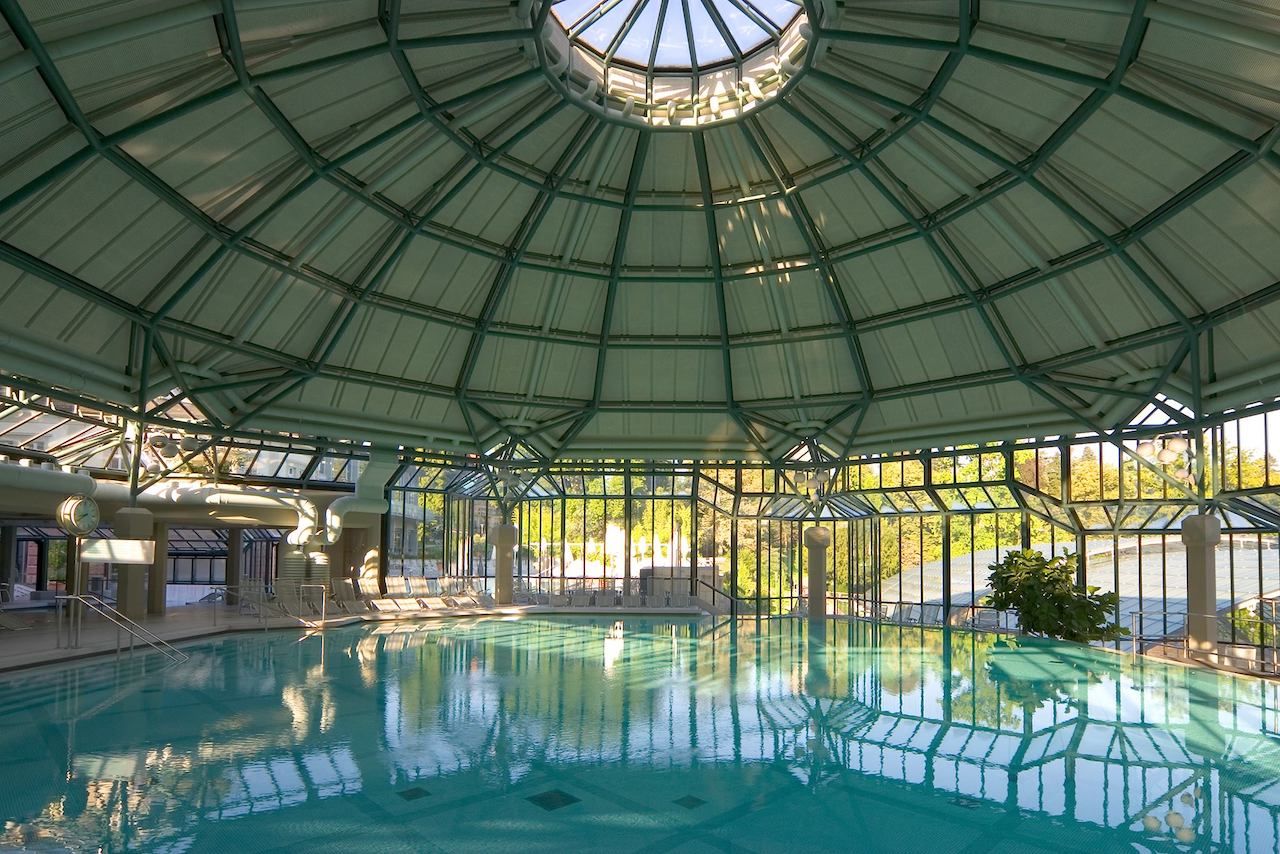 If you don’t mind a little road trip, Bad Nauheim sits about two hours north of Baden-Baden, and has one of the richest spa traditions in the whole country. Defined by its art nouveau buildings, plentiful green spaces, and obsession with the fact that Elvis once lived there, Bad Nauheim was immensely popular in the 19th century for its curative bathing waters thought to heal cardiovascular diseases. The Sprudelhof (or “fountain court”) is the center of this spa tradition, until recently housing a bathhouse with mineral waters and the original tubs from over 100 years ago. A new, highly-anticipated bathhouse and spa are currently under construction there, and it’s set to open in 2023.

Until then, residents take advantage of several modern spas like Dolce and Einklang, and the innovative Gesundheit park. The park is dotted with workout equipment, and mindfulness exercises like a “humming stone,” barefoot garden walk, and couples swing set. There’s also a section with cold-water pools designed to help circulate blood throughout your legs, arms, and feet.

WineGerman wine: 5 travel itineraries for sampling the country’s best
Tagged
Wellness Germany
What did you think of this story?
Meh
Good
Awesome

4 travel itineraries for sampling the best food in Germany

Uncovering German history: 5 travel routes that take you back in time