In Baltimore, the Light Raillink and Metro Subwaylink operate a total of four lines with service to a combined 47 stations. The light rail runs above ground while the subway is mostly subterranean. Both are run by the Maryland Transit Administration. Together, they serve more than 20 million passengers annually, yet most visitors to the city don’t even know it exists, or how to utilize it on their trip.

Many of Baltimore’s main attractions are conveniently located near a light rail or subway station, making them easy for tourists to check out even if they don’t have a car. Here are nine Baltimore attractions you can easily visit by using public transportation. 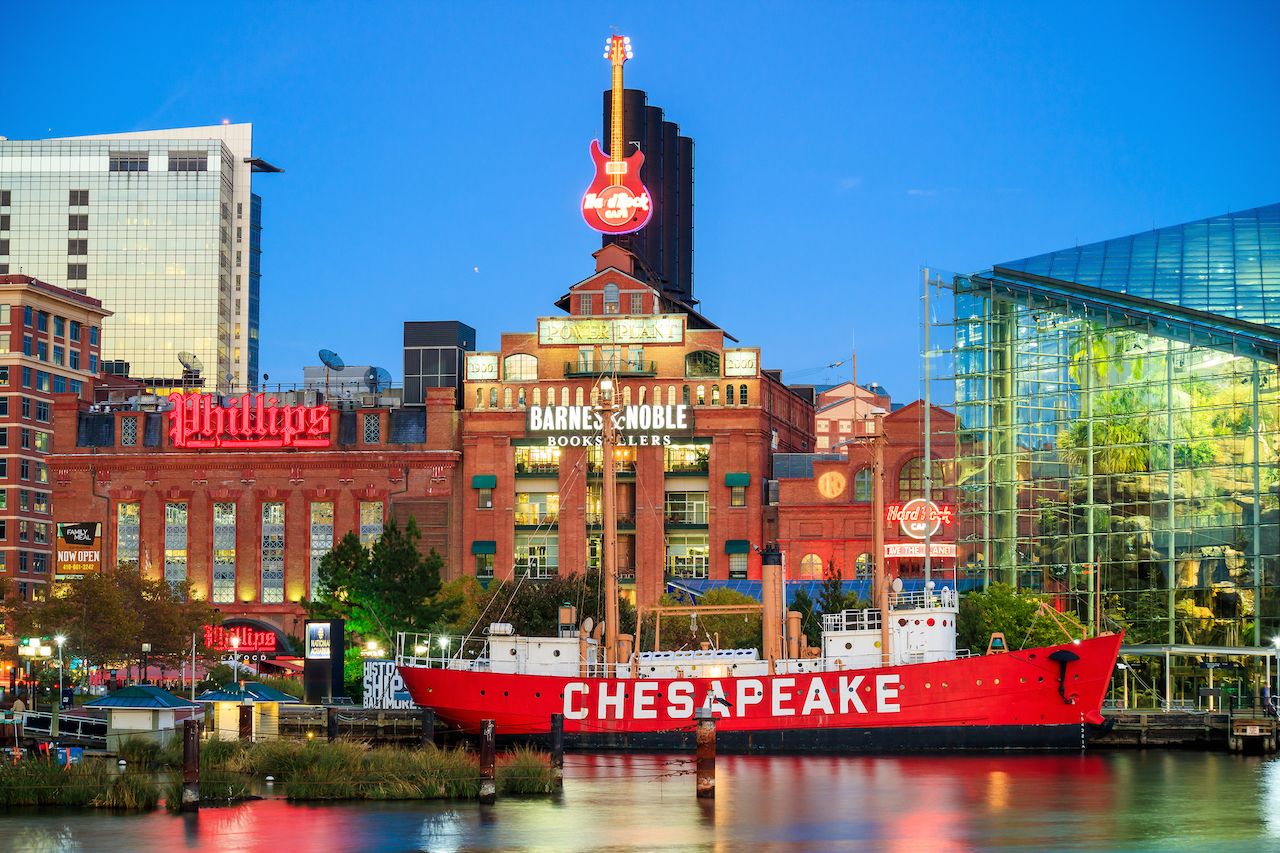 If you only know one thing about Baltimore, it’s probably Inner Harbor. The Maryland Science Center, Historic Ships, Seven Foot Knoll Light, and famous National Aquarium are all located within a five-minute walk of one another in this compact area along the Patapsco River. Like neighboring Little Italy, Inner Harbor is fun, very family-friendly, and also extremely popular with tourists.

Many first-time visitors to Baltimore use this area as a base, which is not a bad idea at all. In addition to the nearby light rail and subway stops, there’s a Water Taxi stop at Pier 5. From there, you can catch a ferry ride to Federal Hill at no charge during weekdays. Ferries run every 15 minutes.

Inner Harbor meets Federal Hill at Federal Hill Park. The park is just a few blocks from the Maryland Science Center. Before you leave Baltimore, grab your camera and head to the top of Federal Hill Park (near the Memorial to Armistead) at sunset or sunrise for some of the best photo ops of the harbor. It’s also a great spot for timelapse videos. 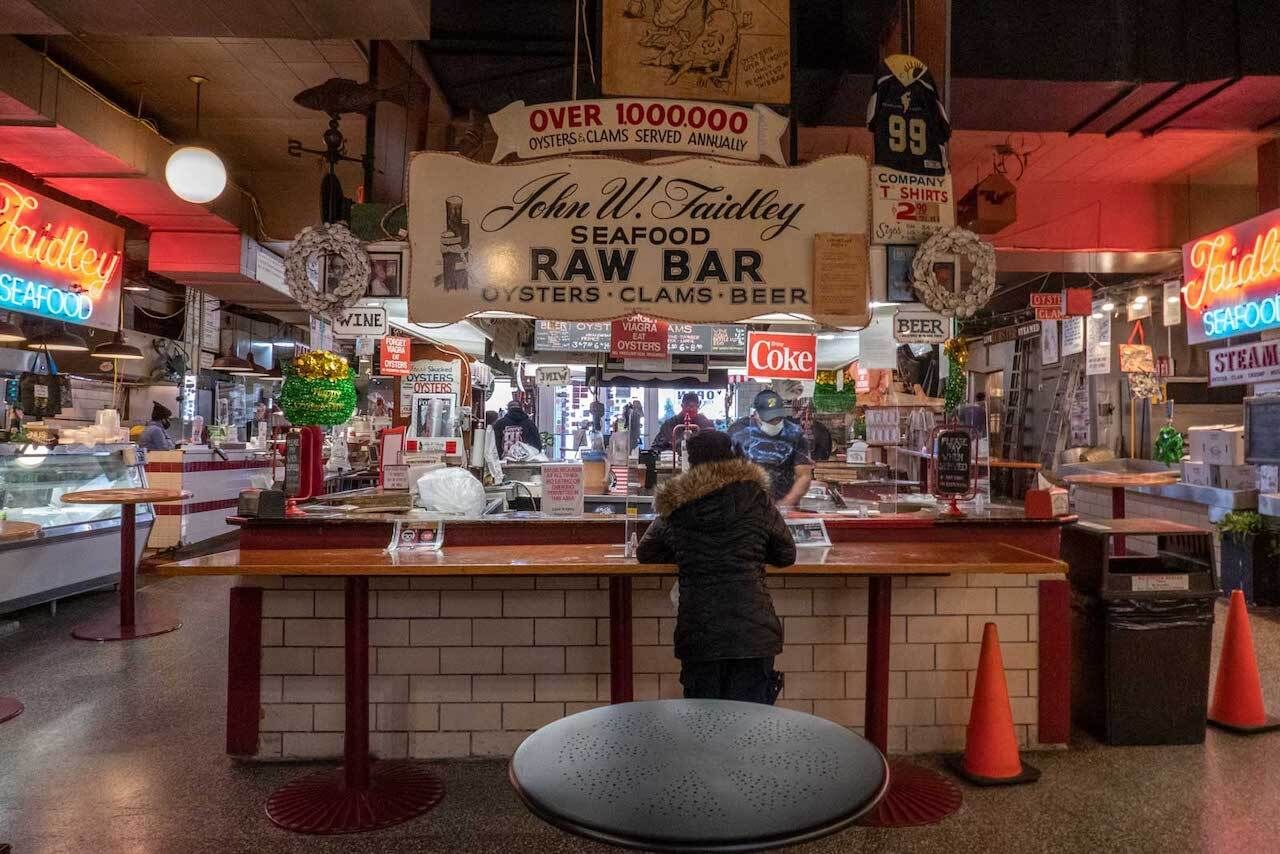 One of the oldest public markets in the United States, Lexington Market has been operating since 1782. It’s the main attraction on Baltimore’s Westside. Don’t expect many health food options beyond fresh fruit and a couple of smoothie vendors. If you’re looking to replace your acai bowl and turmeric tea with some Korean fried chicken and snickerdoodle cake, this is the place.

Berger’s Cookies and Cakes has two adjacent stalls in the market. They were one of Oprah’s go-to spots before she left for Chicago. Andrew Zimmern has filmed at the market and featured the half-chocolate, half-shortbread Berger Cookies on a few of his shows. Berger’s chocolate yellow cake has also received numerous accolades, so make sure to stop there for a treat.

If you want to eat inside the market, we recommend the Faidley Seafood corner, which you must enter from Paca Street on the west side of the building. The walls of this exclusive-feeling section of the market are lined with vendors selling exotic fish and meats, as well as tools of the trade, including crab and oyster knives. While the alligator, muskrat, raccoon, and turtle meat are only available frozen, you can buy Maryland staples like crab cakes and Chesapeake Bay oysters fresh. Both are an essential Baltimore experience, so if you’re looking to try signature Maryland dishes without going to a restaurant, Faidley is a convenient option. 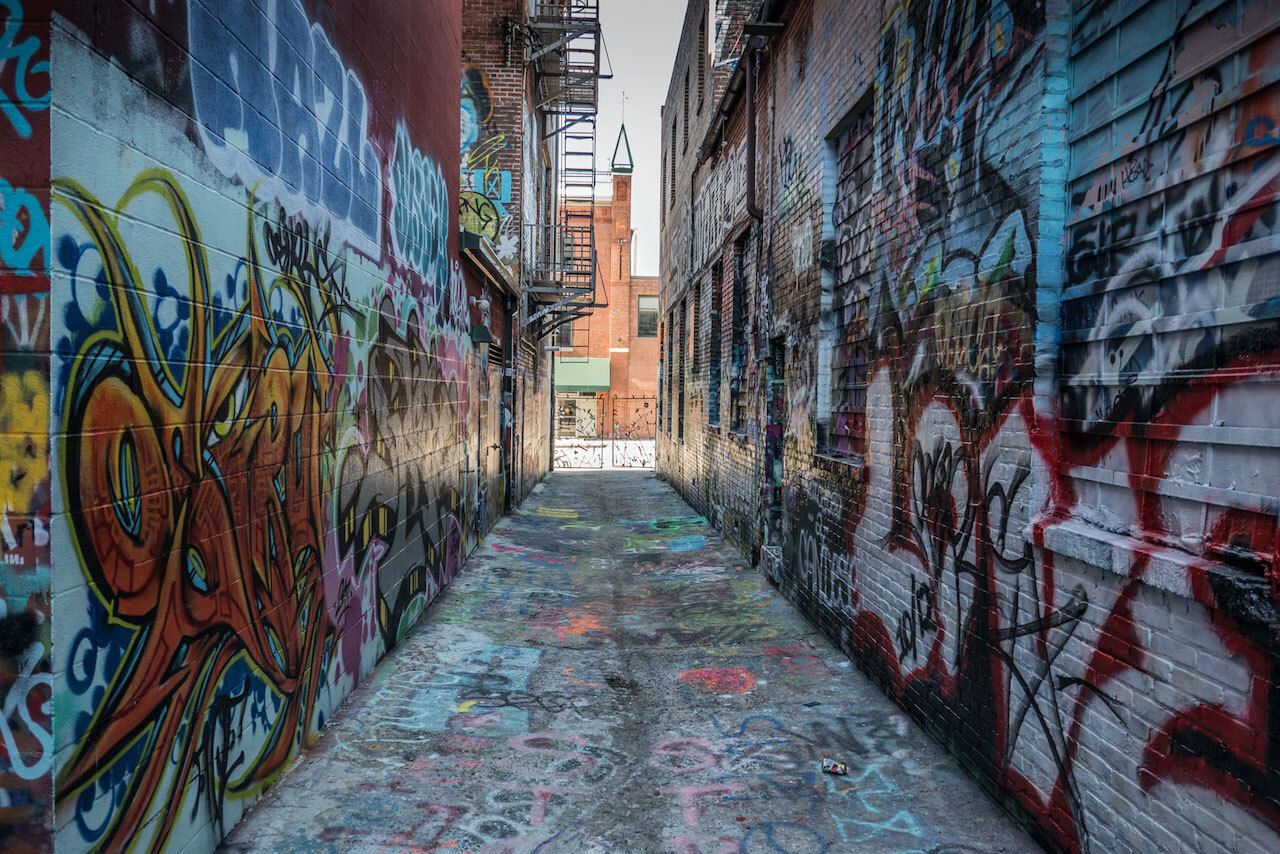 In 2005, Graffiti Warehouse moved in and transformed this L-shaped alley into a safe haven for local graffiti artists and gawking tourists posing for photos in front of the ever-changing murals. Even the ground and trash cans are works of art. While you can find murals in other parts of the city, graffiti alley is a must-visit for any fan of street art. The murals are visible from North Howard Street and continue from West 19 1/2 St. to Maryland Ave. 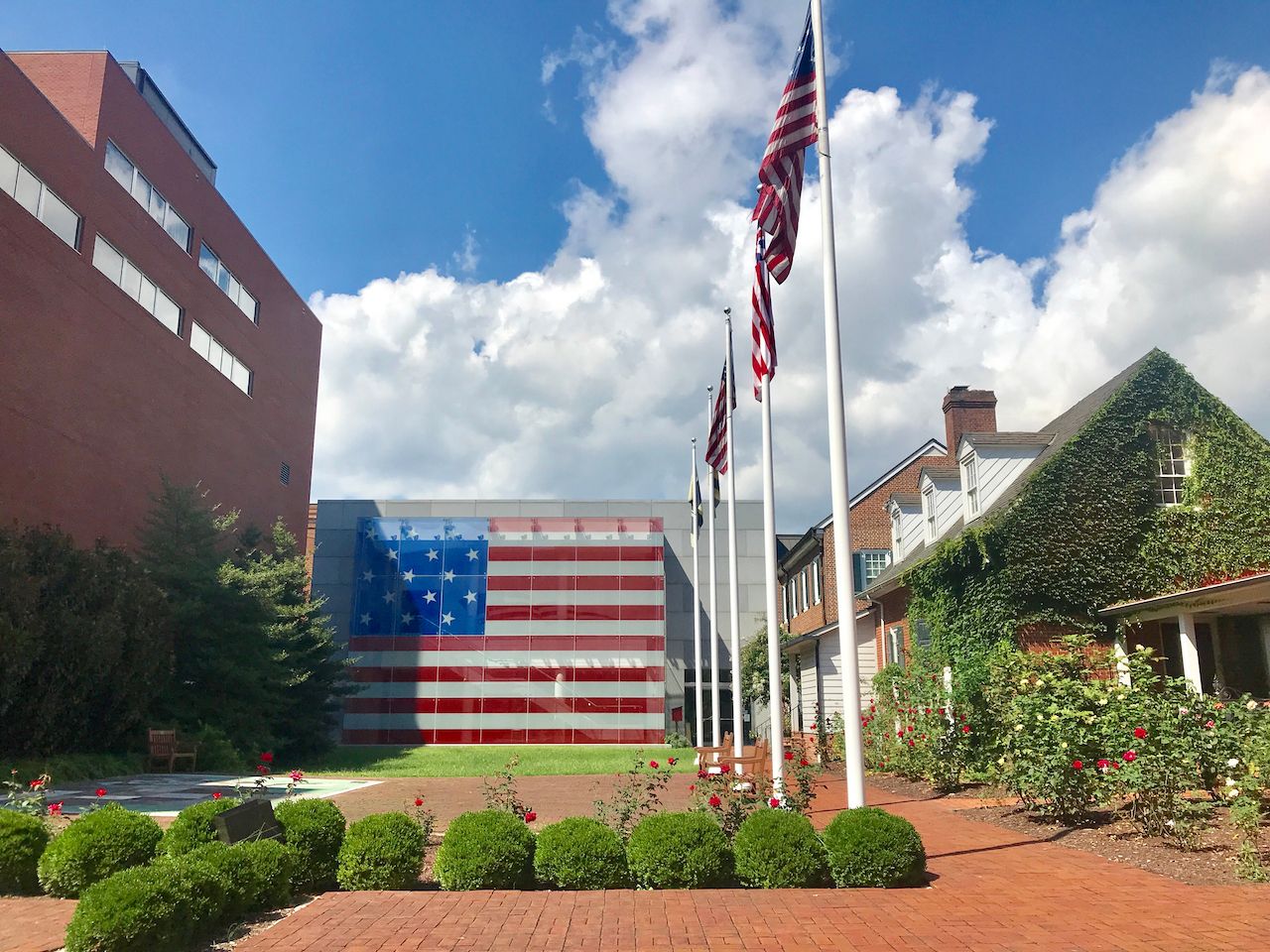 The Star-Spangled Banner Flag House dates back to 1793. The building shares a city block with the Reginald F. Lewis Museum of African American History & Culture in the southwest corner of Jonestown. The flag that inspired Francis Scott Key to write “The Star-Spangled Banner” was sewn inside this late 18th-century building, which has been a museum since the late 1920s. A fragment of the original flag is on display.

The main building includes the ticket counter, main exhibits, and a small movie theater. The exhibits on the lives of Mary and John Pickersgill are in the main building, which is easily spotted from Pratt Street thanks to the large American flag that takes up the entire side of the building. Tours of the house are self-guided; all you need is a mobile phone. Most of the artifacts in the house have numbers displayed, which you press when you dial into the museum number.

It’s best to visit the Star-Spangled Banner Flag House before Fort McHenry in order to put the flag into proper context. 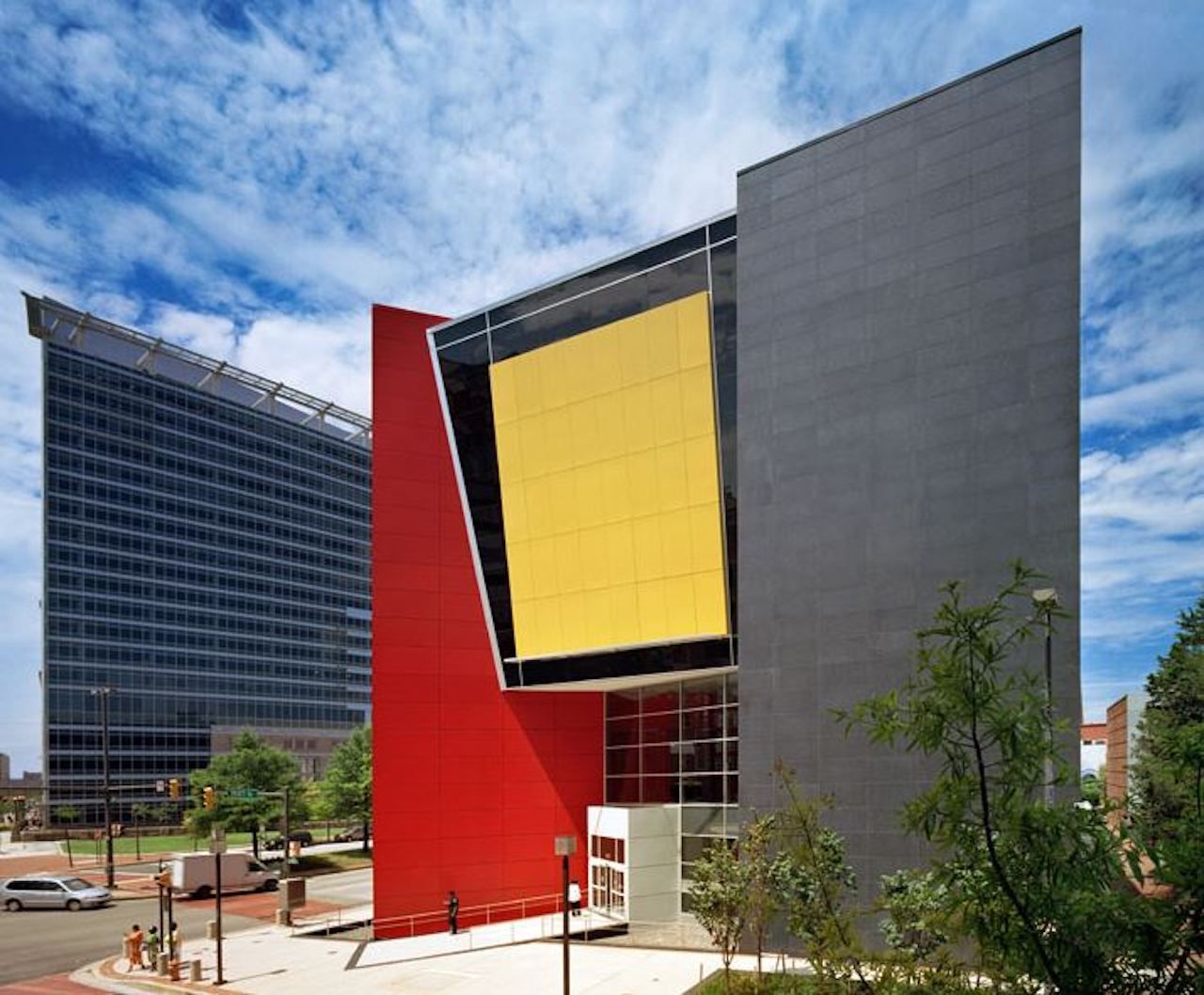 The 82,000-square-foot facility is as striking from the outside as it is engaging on the inside. There’s a café, a small bookstore, and a theater. The three permanent exhibits are on the third floor and cover 400 years, starting with the slave trade in Maryland. There’s a small exhibit on Reginald F. Lewis, but his accomplishments are not the museum’s main focus.

You can purchase timed admission passes here, although walk-ins are accepted as well. 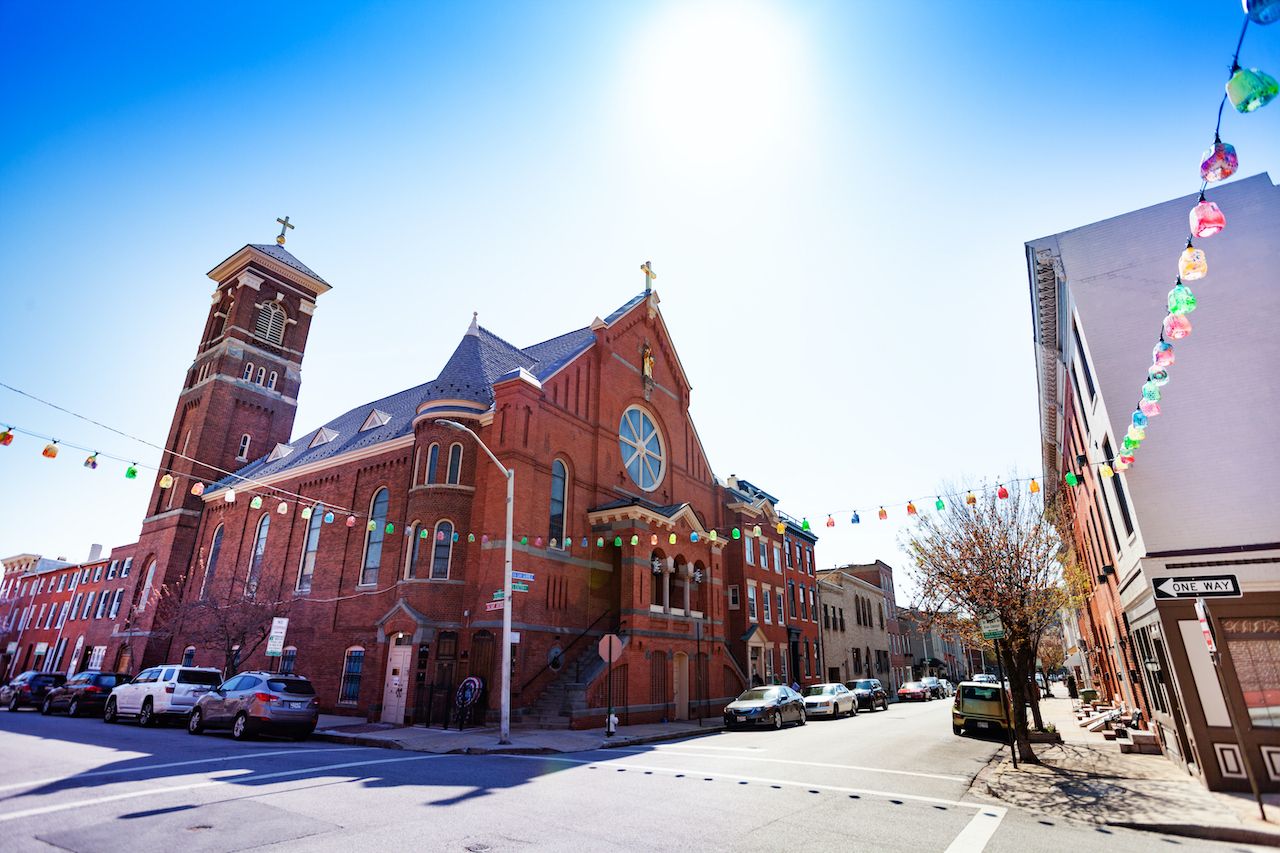 This hexagon-shaped Italian-American enclave east of Inner Harbor is one of Baltimore’s best must-sees. It’s also the southernmost Little Italy in the eastern United States. If you exit the Subwaylink at Shot Tower, you’ll be two blocks north of the northwest corner of Little Italy. The majority of the restaurants and bakeries are located in Albemarle and High Streets between Eastern Ave. and Pratt St.

It’s best to start your walking tour by heading south on Albemarle once you hit Pratt. On your left, you’ll see Casa di Pasta and Vaccaro’s, which is the main pastry shop in the area.

In terms of sit-down restaurants, there are roughly a dozen different options, each with a different twist. Most are well-established and multi-generational. La Tavola is known for its Maryland crab-centric pasta dishes. In 2020, its Spaghetti Neri al Granchio received the Daily Meal award for Best Pasta Dish in Maryland. Sabatino’s has been a gathering place for local athletes since at least the 1980s. Back when it was open until 4 AM, professional wrestlers like Bruno Sammartino and Andre the Giant used to head directly to Sabatino’s after their shows at the then Baltimore Arena. From there, the word got out. Even today, this three-floor family-owned restaurant is a favorite of Baltimore Ravens, Orioles, and especially wrestling legends like Jim Cornette and Ric Flair. On the higher end, La Scala has a more seafood-centric menu with an indoor bocce court.

But there’s more to Little Italy than multi-generational restaurants and bakeries. If you’re looking to get the most out of the neighborhood, it’s best to visit during one of the local festivals held between June and early October. Check the official Little Italy website for exact dates and times. You can also take Italian cooking or language classes at the Pandola Learning Center. One block west of St. Leo’s (one of Baltimore’s oldest Roman Catholic churches), you can catch a bocce game in D’Alesandro Park. 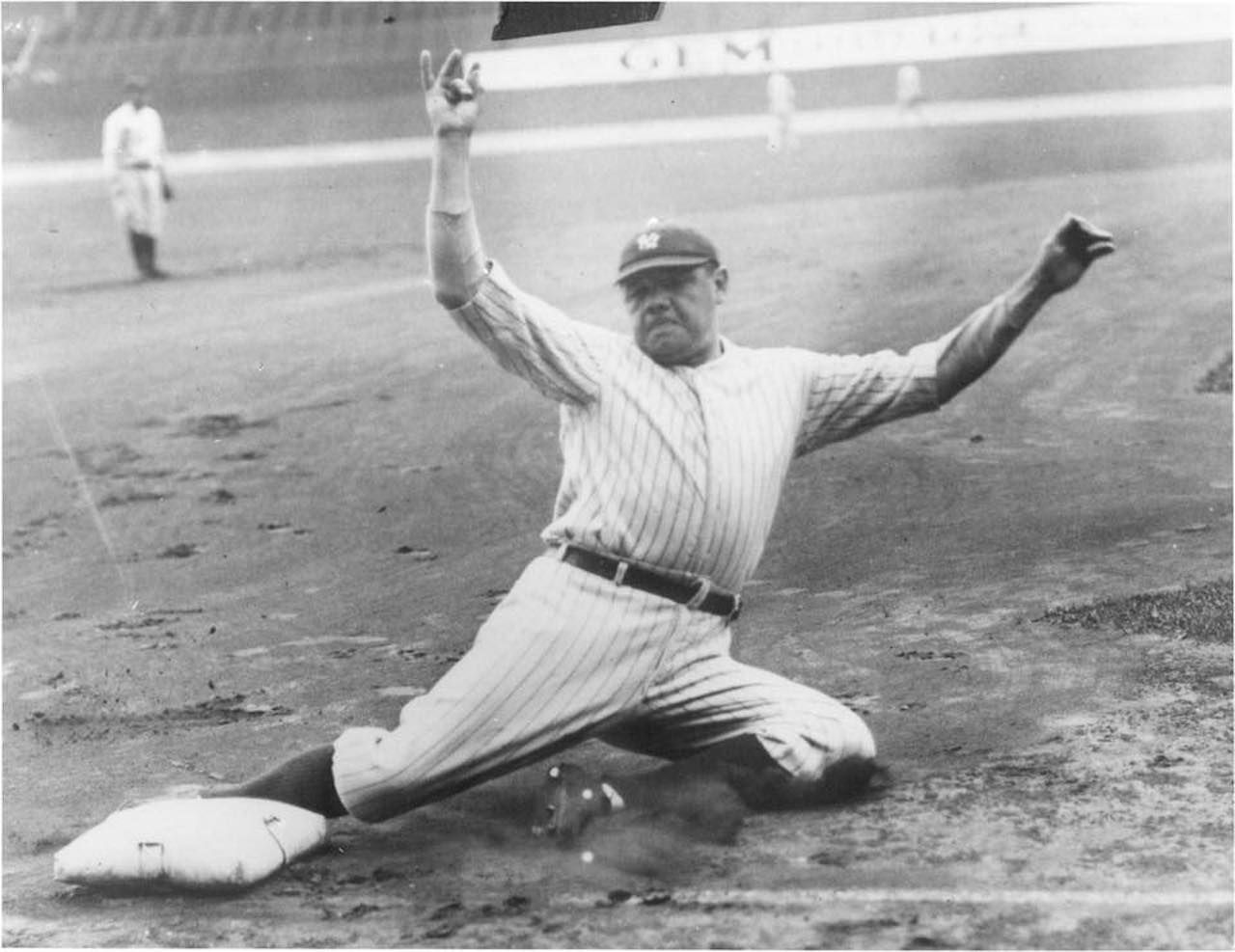 George Herman Ruth, Jr. was born in Baltimore on February 6, 1895. Although he later became one of the most famous American athletes of the 20th-century, his story began at 216 Emory Street in a neighborhood now known as Pigtown. The house blends in among the neighborhoods’ Baltimore-style brick facade row homes.

Once inside the Babe Ruth Birthplace and Museum, you’ll see red brick resembling Camden Yards on your right. Past the cashier, there’s a 25-minute documentary playing in the former living room. Farther inside, there’s a small theater with an even more interesting entrance — on the way in, the high walls are lined with a list of Ruth’s 714 home runs broken down year by year.

Upstairs you can see the kimono The Babe received during his 1934 visit to Japan. The man who got his nickname from his exuberance over ordinary things often wore the kimono at night. In the same room, you can also get in on the debate about whether or not Ruth called his shot against the Chicago Cubs on October 1, 1932, at Wrigley Field. 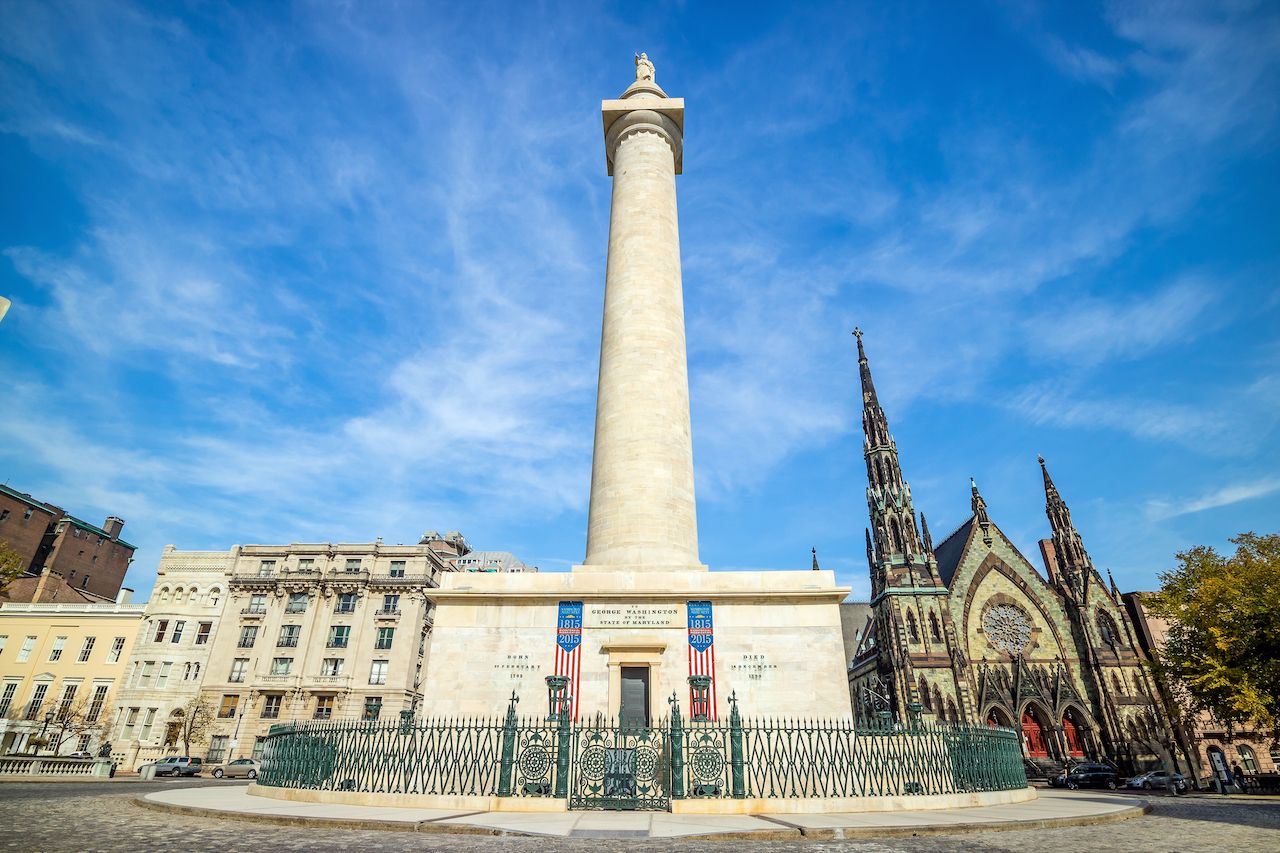 The original Washington Monument predates the taller and more famous one in DC by 56 years. The Maryland version is both the main attraction and the geographic heart of Baltimore’s Mount Vernon neighborhood. The 227-step journey to the top takes less than 10 minutes. From the lookout of this 178-foot-tall white marble Colossal Doric column, you can see as far as Inner Harbor. There’s also a gallery at the ground level.

Mount Vernon is also an ideal base if you’ve already explored Inner Harbor and want to see more of the less touristy side of Baltimore. If you do plan to stay in the neighborhood, consider staying at Hotel Revival. This 107-room, 14-story boutique hotel is located across the street from the monument. Nearly one-third of the rooms have a monument view, as does the aptly named Topside Rooftop Bar & Eatery.

While Inner Harbor attractions are more grandiose, Mount Vernon’s tend to be more hidden. Baltimore School for the Arts (located at the southwest corner of Cathedral and Madison) counts Jada Pinkett Smith and Tupac Shakur as former students. Although the school is not open to tourists, you can see Tupac’s likeness on a yellow wooden saltbox at that same corner.

Mount Vernon also has an under-the-radar marketplace at the southwest corner of Centre and Park. The Mount Vernon Marketplace is full of gourmet dumplings, Korean rice bowls, street-style tacos, and even Neo’s Chesapeake pizza. Unlike Lexington Market, there’s plenty to drink at Mount Vernon. Neo’s sells beer and wine by the ounce. There are also soju and sake bars. 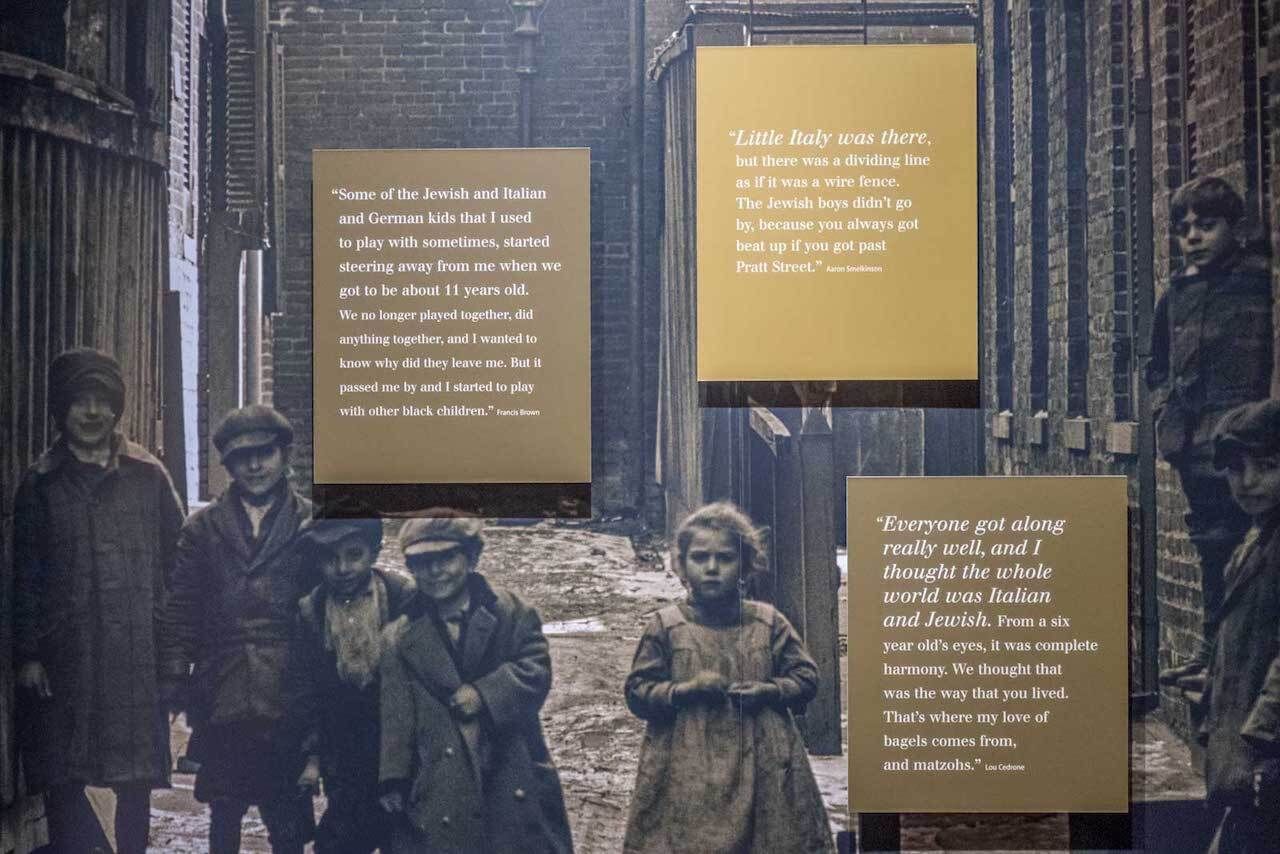 The Jewish Museum of Maryland focuses on Jewish life in East Baltimore, also known as Jonestown, dating back to the mid-1800s. The visitor center is located between two historic synagogues. The admission price includes access to the visitor center exhibits and guided tours of the B’nai Israel and Lloyd Street Synagogues. The museum’s 12,000-plus objects include two Torahs saved from the European holocaust and the oldest documented Mikvah in the United States. You’ll have to cover your head when entering the B’nai Synagogue, which is still an active congregation.

South of the museum, along Lombard St., there are two well-established New York-style Jewish delis: Attman’s and Weiss. Try to time your visit so you can have lunch at one of these East Baltimore landmarks.

As of this writing, the museum is open from 10 AM to noon and 1 PM to 3 PM on Sunday, Tuesday, and Thursday. Special events still take place on an almost daily basis. It’s worth looking into upcoming events when planning your visit.

Black TravelThe Real Baltimore Is a Place Brimming With Black Joy
Tagged
Train Travel
What did you think of this story?
Meh
Good
Awesome