At lunchtime on a regular weekday in October, the small restaurant in Beijing’s old Muslim quarter was extremely busy. I had to share a table with three middle-aged women, who were heatedly discussing real-estate flipping in crisp Beijing dialect. Their food came — meat pies, napa cabbage, and the restaurant’s famous baodu (blanched tripe). Soon every dish would be slathered in zhi ma jiang, or sesame paste, a condiment ubiquitous in Beijing cuisine.

I first tried Beijing sesame paste as a hot pot dip when I was in college. I grew up in South China where sesame paste, or sesame sauce as it’s sometimes labeled at the grocery store, isn’t quite as common. It was a curious taste at first — slightly bitter on the first bite, but almost immediately, the bitterness is overcome by a rich nuttiness, which is enhanced by the creamy texture.

Unlike the tahini used in Middle Eastern cuisine, Beijing sesame paste is made from roasted sesame seeds, and the final product is mixed with a small amount of peanut butter, imbuing the paste with a sweet, smooth flavor. The smooth taste also makes it extremely versatile. Beijingers can eat almost everything with sesame paste. For breakfast, it is kneaded into pastries and stirred into congees. For lunch and dinner, it’s smeared on pies and blanched meat. In summer, it’s drizzled on salads and cold noodles. In winter, it’s a popular hot pot dip. My favorite (and many locals agree), however, is to simply slather sesame paste on a plain, piping hot steamed bun. The sinful but sacred union of fat and carbs all in one nutty, chewy bite evokes our most primal feelings for food.

The fraught history of sesame paste 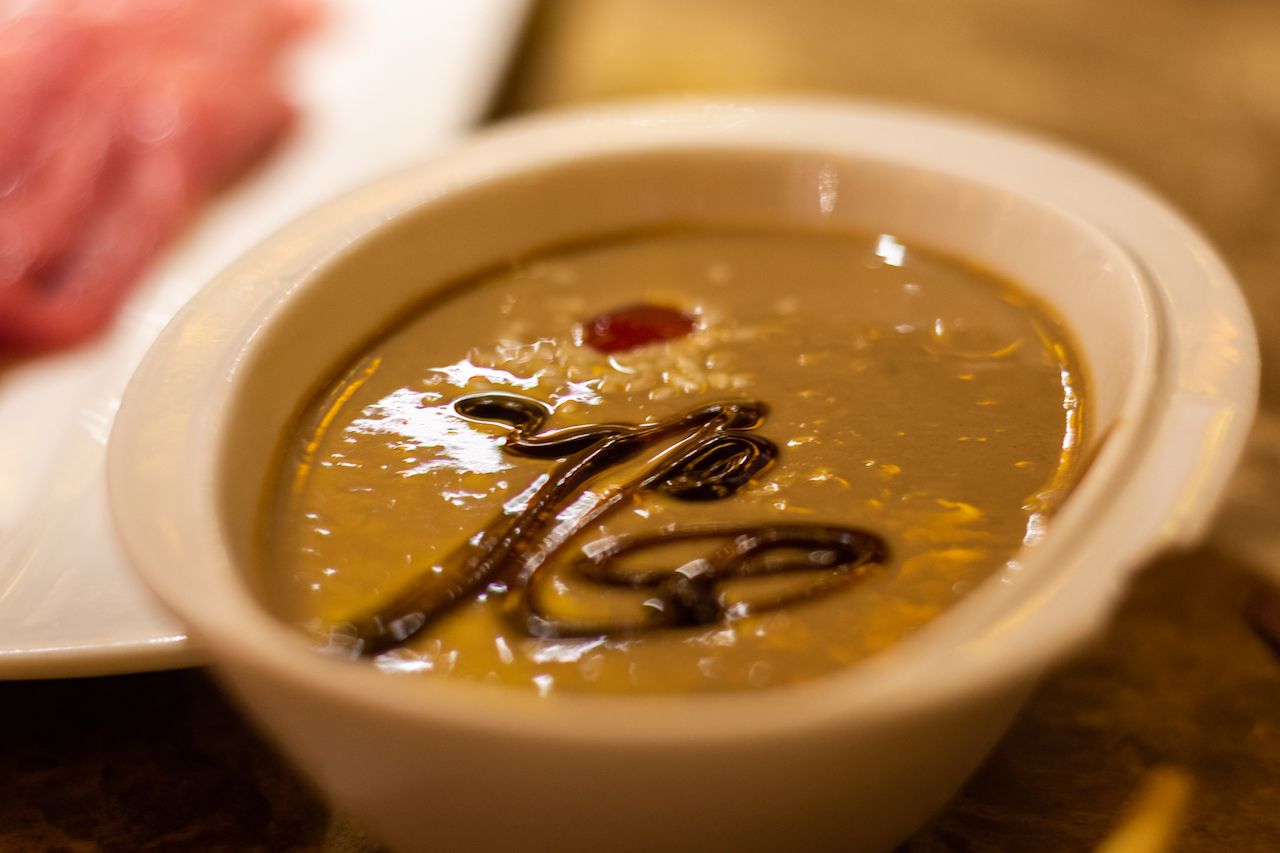 If you’re looking for sesame paste in Beijing, your first stop should be Zhaofujie Food Store, tucked away in a narrow alley behind an imposing 15th-century drum tower. The store opened in 1956. For more than 30 years, it was a state-owned vendor distributing meat, vegetables, eggs, and a small selection of tightly rationed gourmet food to more than a thousand households in the neighborhood. Before China’s 1992 reform, which abolished central planning, the country’s economy operated largely under a rationing system in which everything, from food and clothes to home appliances like radios and sewing machines, had to be purchased from designated vendors with government-issued coupons.

“You [couldn’t] buy anything without a coupon, no matter how much cash you have,” my dad once told me. He was born in 1955 and still has vivid memories of buying rationed meat (250 grams per person per month) for his parents.

Sesame paste, as a cherished gourmet food, was tightly rationed back then. From 1956 to 1992, only 200 kilos were shipped to Zhaofujie Food Store every month to be distributed to as many as 1,300 families in the neighborhood. Local residents who grew up in the 1960s and ‘70s still have fond memories of picking up their families’ monthly ration of sesame paste from the store. The kid handed over a jar and the family’s ration book. After checking the accorded amount, a senior store clerk scooped out a ladleful of sesame paste from a huge vat, held the ladle above the mouth of the jar, and nimbly turned his wrist. Creamy sesame paste would then flow down in a thin, smooth stream. When it was about the right weight, the clerk shook his wrist to stop the flow, and threw the jar on a scale — just to confirm.

“The quota was 50 grams of sesame paste per person per month. If one family got more than its share, someone else would not have enough,” a friend’s mom who grew up in Beijing told me.

Local families would stretch their monthly sesame paste ration for as long as possible.

“My mom would mix a little ma jiang [sesame paste] into the dough when we made steamed buns every week. Or if it’s summer, we would drizzle some onto the cold noodles,” she added.

The current owner of the store, Li Ruisheng, started working at Zhaofujie Food Store in the late ‘80s. Against the backdrop of privatization, supermarkets and food markets opened across Beijing, offering varied product selections and explorative shopping experiences that were completely unheard of in the communist era. Zhaofujie Food Store, along with other state-owned vendors, struggled to keep up. To survive, it stopped selling money-losing fresh produce and rented out more than half of the store space. Only a selected assortment of traditional specialty food continued to be sold there, which included its beloved sesame paste.

Despite these efforts, the rigid business operations from the past era were no longer compatible with the booming consumer economy. Business was dismal. Li Ruisheng, however, decided to remain open. His strategy was to sell only authentic Old Beijing flavors that are increasingly hard to find in the rapidly changing city.

To ensure consistent quality of his sesame paste, the best-selling product, Li Ruisheng sampled sesame paste from producers all around Beijing before finally deciding to source exclusively from a factory in the Shunyi suburbs. The producer only uses heirloom sesame seeds domestically produced in Anhui and Hubei Province, which is less bitter than the cheaper imported kinds, and mixes in a slightly lower proportion of peanuts to make the sweetness less overwhelming.

Words quickly spread. Customers from every part of the sprawling city began to buy their sesame paste at his shop. Many even drove here from distant suburbs to try the store’s artisan sesame paste that reminded them of childhood. Sales surged. According to one news report on the store, a “55-kilogram jar of yellow sauce can be sold almost every day.”

The best sesame paste in Beijing 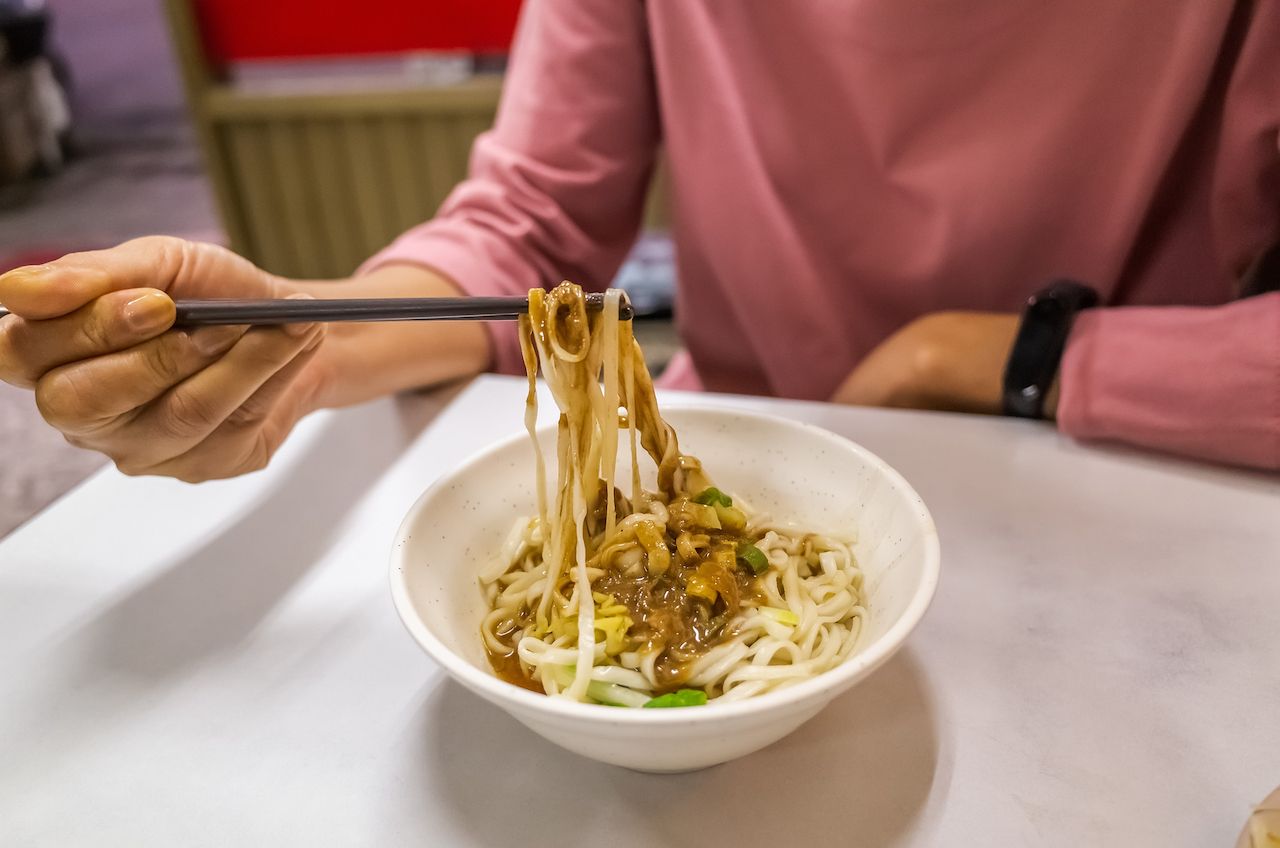 Last October, I visited Zhaofujie Food Store for the first time during a trip back home. It has been almost 10 years since I graduated from college, and every time I go back, usually for not more than three days of layover, I am surprised at how quickly the city is being gentrified.

“Many mom-and-pop shops have been forced to move away,” a longtime friend who has lived in Beijing for more than 15 years told me. “There’s an ongoing initiative to renovate the streets. To some extent, the city now looks glossy but sterile.”

Zhaofujie Food Store and its neighborhood, however, defied my expectations. It was late in the afternoon, and the wooden shelves were only half stocked. A few plastic basins of pickled mustard were laid out on the old counter. In front of the counter was a huge, half-empty vat of sesame paste. Salt-and-pepper-haired Li Ruishing was chatting quietly with an old man carrying groceries. All other customers I saw also seemed like local residents.

In fact, the entire neighborhood, despite being in the historical center of Beijing, felt more residential than commercial. School children chased each other in the narrow alleys. Groups of retirees were kicking jianzi in public parks. For the moment, the old neighborhood seemed to have survived the roaring trend of gentrification. Still, many old courtyards are quickly being turned into cafes, galleries, and boutique hotels. Li Ruisheng, after more than 30 years in the store, is considering retiring. I’m not against commercial developments, but I still could not help wondering what tradition, including food tradition, which carries so many of the city’s memories, would be lost in the process.

I found my answer in Niujie (also known as Ox Street), part of Beijing’s old Muslim quarter that’s known for its bustling food scene. The neighborhood is all wide streets and highrises. But the sidewalks are full of hustle and bustle. In front of popular food stores, locals on their daily grocery runs stood in long lines. When it’s their turn, they shout their orders into the narrow take-out windows impatiently. “One kilo of rice cake!” “Two Kilos of sesame paste turnovers!”

Later that day, I went to Zhangji, a hot pot restaurant. The young owner is said to have perfected his sesame paste dip recipe. He dilutes his sesame paste with water infused with assorted herbs and spices, and mixes in a small amount of minced chives, shrimp paste, and pear confit to brighten up the taste. The waiter insisted on the proper way to apply the dressing.

“Don’t stick the lamb slices into the dip. Drizzle a little sauce onto the sliced lamb. This way, the sesame paste balances but not overwhelms the flavors of the lamb,” he instructed.
The use of Beijing sesame paste in fine-dining restaurants like this one reassured me that it is by no means a nostalgic item on the verge of becoming obsolete but a living tradition that evolves with the ever-changing consumer tastes.

I realized that for Beijing people, the love for sesame paste, just like many other traditions, is ingrained in their lives. For them, sesame paste symbolizes a passion and resilience to pursue joy and refinement with limited resources, even in times of poverty and scarcity. Now, when former luxury becomes an everyday staple, such a spirit remains, continuing to shape the palates and minds of generations to come.