Chinese hot pot (huoguo, fire pot, or steam boat) is a social meal of fresh vegetables, thin-cut meats, and a simmering broth shared amongst friends and family. It has a long history as a popular way to share a meal and conversation.

According to legend, hot pot was invented at least 1,000 years ago by the Mongols, who needed hot and hearty meals after long stretches on horseback while conquering China. Even back then, hot pot was a communal meal; Mongol soldiers gathered around boiling pots of broth (they supposedly used their own helmets as a vessel, though that tidbit is likely apocryphal), adding in pieces of sliced horse meat and mutton to help renew their exhausted bodies.

The people of the empire absorbed this meal favored by soldiers into their normal diet. Eventually, despite its humble beginnings, hot pot reached the Forbidden City in what is now Beijing. Emperor Qianlong, who reigned from 1735 to 1796, favored the dish, eating it with roast duck and yams. Over the years, hot pot became much more egalitarian, and today is enjoyed by everyone regardless of rank.

According to another story, hot pot originated in Chongqing (still considered the “hot pot capital”), which is a city in southwest China, situated at the convergence of the Jialing and Yangtze rivers. Sailors looking for a cheap meal invented the dish, as this story goes, originally adding duck intestines, beef tripe, and pork arteries to the broth — the discarded animal parts from nearby markets. To this day, internal organs are still a popular accompaniment to hot pot.

Regardless of how it came about, China is undoubtedly the birthplace of hot pot. It’s since spread throughout Asia. In Cambodia, hot pot is known as yao hon, and the broth is made with soybean paste, fish sauce, and sometimes flavored with coconut soda. In Japan, hot pot is called nabemono, and there are two styles: sukiyaki and shabu shabu (the name of the latter refers to the “swish-swish” motion made when quickly cooking raw meat in the broth).

Much like Korean barbecue, the atmosphere at a hot pot restaurant is boisterous and celebratory. The beer flows and the spicy broth bubbles, no matter the time of year.

How to order at a Chinese hot pot restaurant 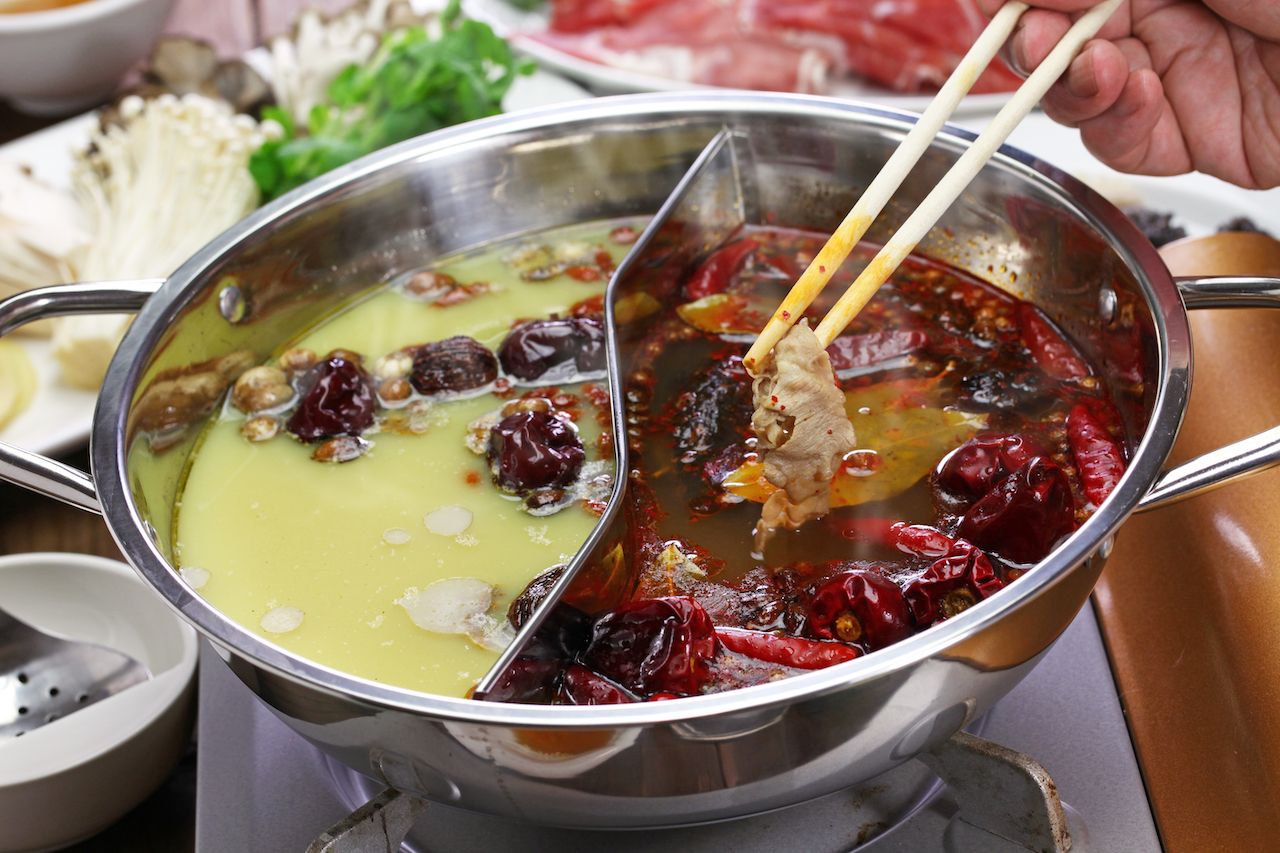 Anyone wondering what to order will be faced with a load of options. At a modern hot pot restaurant, you’ll be handed a menu with serving options, the price per serving of each dish, and boxes to check that indicate what you want to order to the server. At your table, you’ll find a cooktop or hot plate that will heat the pot of broth. Your server will initially turn up the temperature on the burner, but feel free to adjust it over the course of your meal.

The first to make is what type of broth to get. Styles vary by region, though the two most popular are Chongqing and Sichuan hot pot, which incorporate tongue-numbing Sichuan peppers and handfuls of peppercorns (in Beijing on the other hand, hot pot broth trends to be on the milder side). The result is a rich, muddy red, and eye-wateringly spicy broth that will certainly clear your sinuses.

If spicy isn’t your style, don’t despair. Most restaurants offer a variety of options, including a mushroom soup broth or a vegetable-based broth. Some places might also include a “yin yang” option (a dual-sided hot pot) so that you can try two varieties of broth at once.

Here’s where hot pot gets tricky. Once you’ve settled on the broth, you’ll have to decide what you want to cook in it. If you feel overwhelmed by the hot pot menu on your first, second, or even third visit, that’s normal. A hot pot menu is extensive and split into categories, including seafood, meat, meatballs, vegetables, dumplings, and tofu (all pre-cut). Don’t think of hot pot like soup. Instead, the broth is an agent for cooking fresh and raw ingredients. 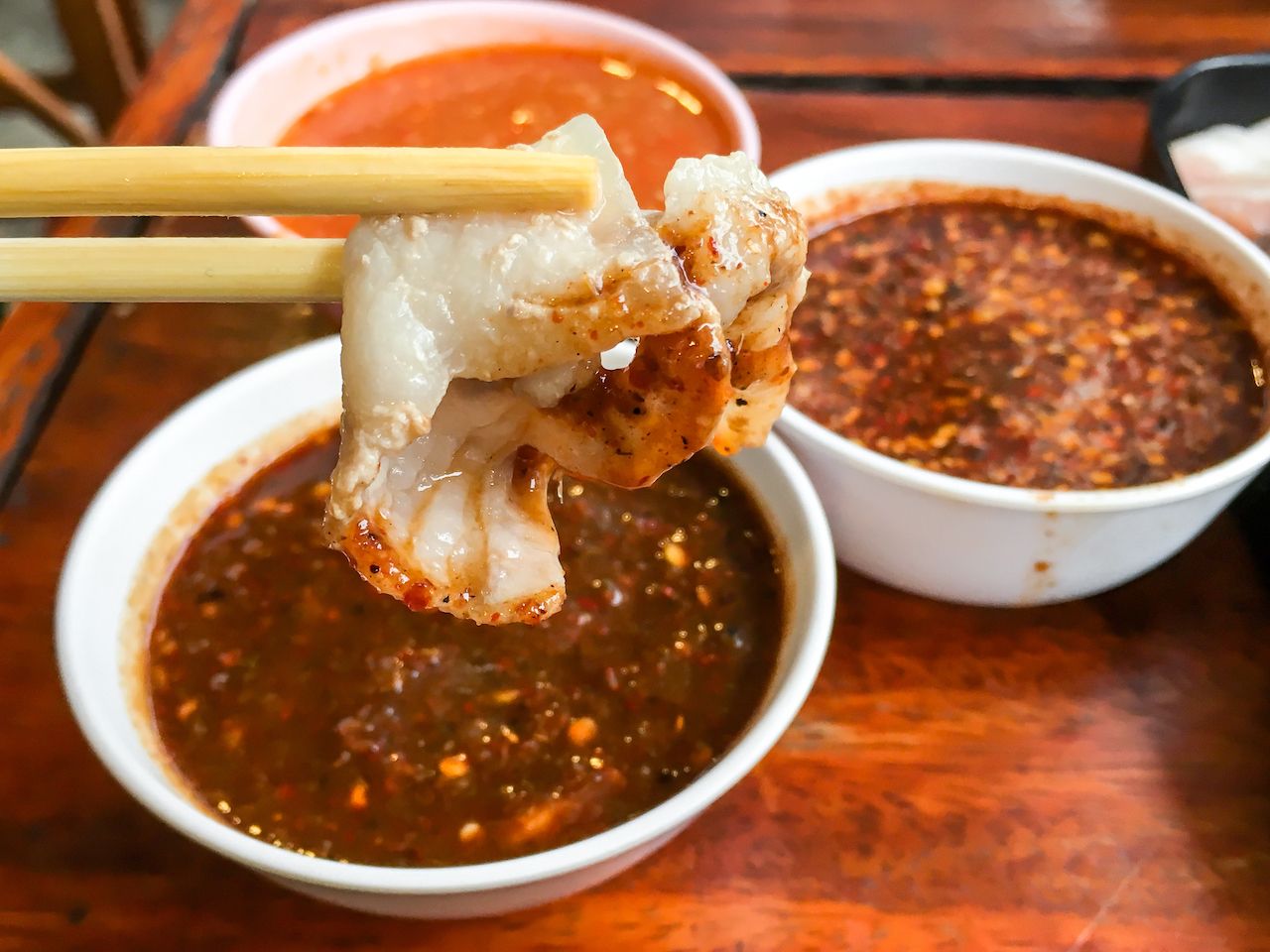 Small ramekins are presented at each table. These should be filled with dipping sauces to dress the meat once it’s been cooked. Often you’ll find the sauces at a separate buffet-style station.

Not only do dipping sauces add flavor to the meat, they can temper the spiciness of the broth. A sesame oil-based sauce, for instance, will counteract the burn of Sichuan peppers. If you’re less experienced with hot pot, this is another place to experiment by pairing different sauces with cuts of meat to find out which combination is your favorite.

How to eat hot pot 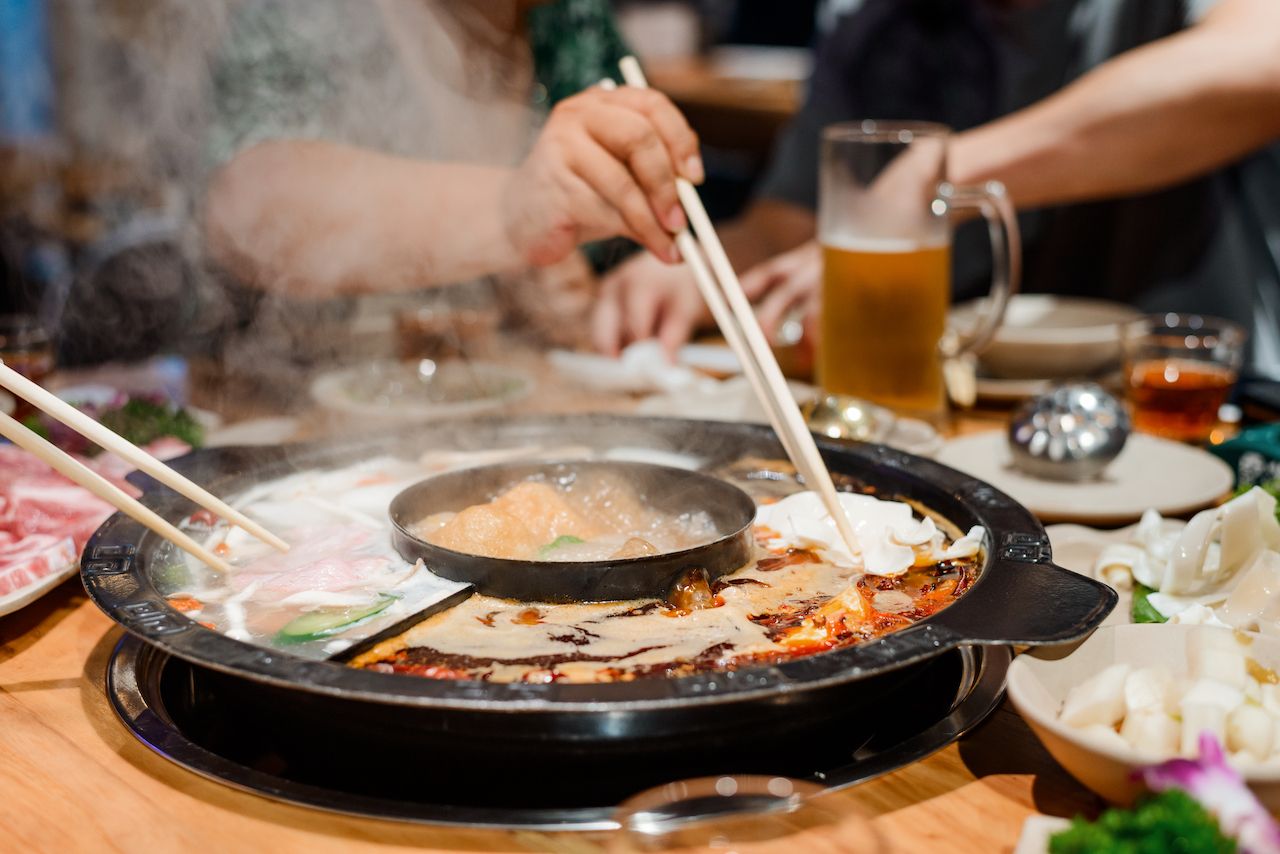 Wait for the broth to begin to simmer before you begin cooking your ingredients. Each person is provided with a small plate or bowl, as well as a set of chopsticks. Metal slotted or mesh spoons are also provided, which you can use to stir the broth and to fish out meat and vegetables cooking in the broth. Each meat platter comes with its own set of tongs.

Meats typically arrive at the table thinly sliced. It’s best to cook these pieces for 10 seconds to a couple of minutes, or until the color has completely changed. Dip a slice of meat into the pot using chopsticks (ideally a different set than you’re using to eat), and hold onto it until it’s done cooking and can be added to your bowl. Items like yams and dumplings need to cook for longer, so drop those in the broth and then extract them using one of the provided spoons after a few minutes. Meatballs are usually done cooking when they float to the top of the broth.

Beware that if you opt for a spicy broth, you might lose track of the individual pieces of food in the bubbling, cloudy liquid. It’s always smart to give the broth the occasional swish to surface any missing items, and make sure nothing ends up overcooked.

The key to enjoying hot pot is to pace yourself. While it may take some practice, knowing how many platters of hot pot ingredients to order is crucial. Depending on the size of your party, start out with several platters of meat and at least one vegetable, then expand your reach if everyone is still hungry, otherwise piles of uncooked food might end up going to waste.

Add your ingredients to the broth gradually rather than dumping everything in at once, which lowers the temperature of the broth. Each of the ingredients at your table should be eaten piece by piece, though it’s fine to cook slices of vegetables and meat at the same time.

Remember that hot pot isn’t just a dinner, it’s an occasion. Venture out of your comfort zone and try a vegetable, a cut of meat, or even a dipping sauce that looks unfamiliar. Bring your friends, order beers for the table if you drink (Tsingtao is a popular Chinese-made option), and have a few tissues on hand, because if there’s one quintessential hot pot experience, it’s watery eyes and runny noses. Those Sichuan peppers mean business.

Food + DrinkNaxi cuisine is the Chinese food you’ve been missing out on
Tagged
Food + Drink China
What did you think of this story?
Meh
Good
Awesome