The late 20th century saw Northern Ireland’s capital of Belfast nearly torn in two as organized factions of Irish Catholics clashed head-on with Protestant counterparts loyal to the British crown. The conflict is known as the Troubles, and physical marks from 30 years of vigilante violence and working-class activism cover the western part of the city. While the city has long since rebounded from the conflict and is now one of the most vibrant destinations in all of Europe, relics of the Troubles loom large, often piquing the curiosity of many travelers to Belfast.

But before you stroll through as a tourist, it’s important to remember the gravity of the unrest; over 3,500 people lost their lives throughout the conflict that spanned the late 1960s to the Good Friday Agreement of 1998 (followed by sporadic violence even after a ceasefire). Memories of the violence are still fresh for many locals that lived through it, so you should exercise caution before flagrantly conversing about it at the pub — especially when you don’t know which side of struggle they empathize with.

While many people are willing to shed light on the era, the last thing you want to do is offend or upset a local when you’re a guest in their town. Instead, the best and most respectful way to educate yourself is with a Black Taxi tour, which will bring you right to the heart of the conflict with guides who are very much willing to provide much-needed context to the politically charged art and memorials of the city, and share incredibly moving, personal experiences you could never glean by yourself. 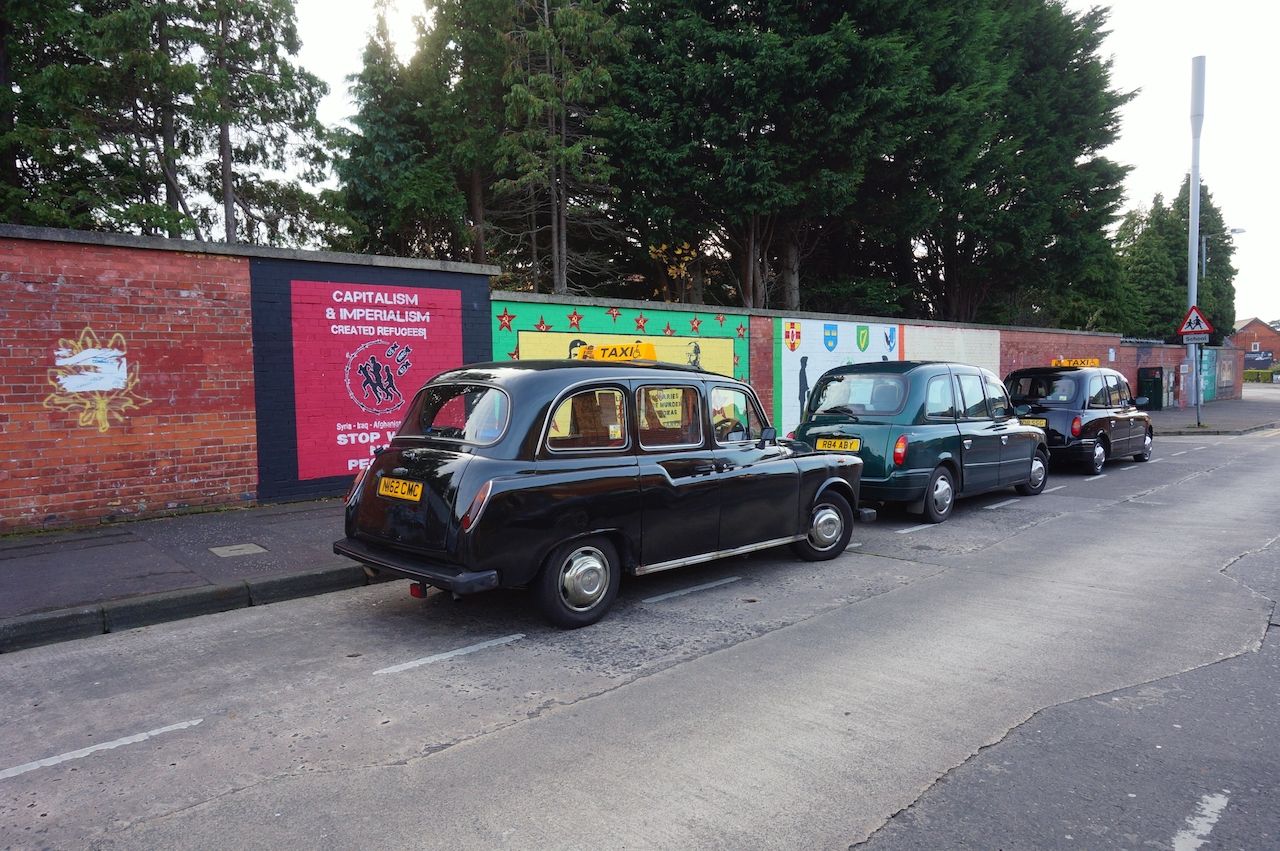 Before you book, be sure your crew is prepared to be floored by the history and powerful artwork that’s to come. Black Taxi tours are a politically charged experience led by a driver who will not hesitate to share his opinions on the Troubles, the relationship between Catholics and Protestants in the city past and present, and the unofficial segregation that is still felt in some parts of Belfast to this day.

One thing that’s integral to understanding the Troubles: there were no “good guys” and “bad guys.” Like much of history, the story of Northern Ireland’s identity isn’t black and white, and if you were to do a cursory Google search of the subject, you’d quickly realize that a simple, unbiased summary cannot be found. There were understandable viewpoints on either side, violence perpetrated by both, and heartbreak felt by all. As such, it’s very rare to find a tour providing a fully neutral view of the conflict.

Your taxi will be driven by either an Irish Republican who is fiercely opposed to the British presence on the Emerald Isle or a pro-Union loyalist, and the background of your driver determines the point of view of which you’ll see the city. This also means you could do the tour twice and have completely different experiences each time. But no matter which side your driver is on, you’ll visit the city’s still-standing Peace Wall and view the impassioned street art that dots the infrastructure throughout the Falls Road and Shankill Road districts. 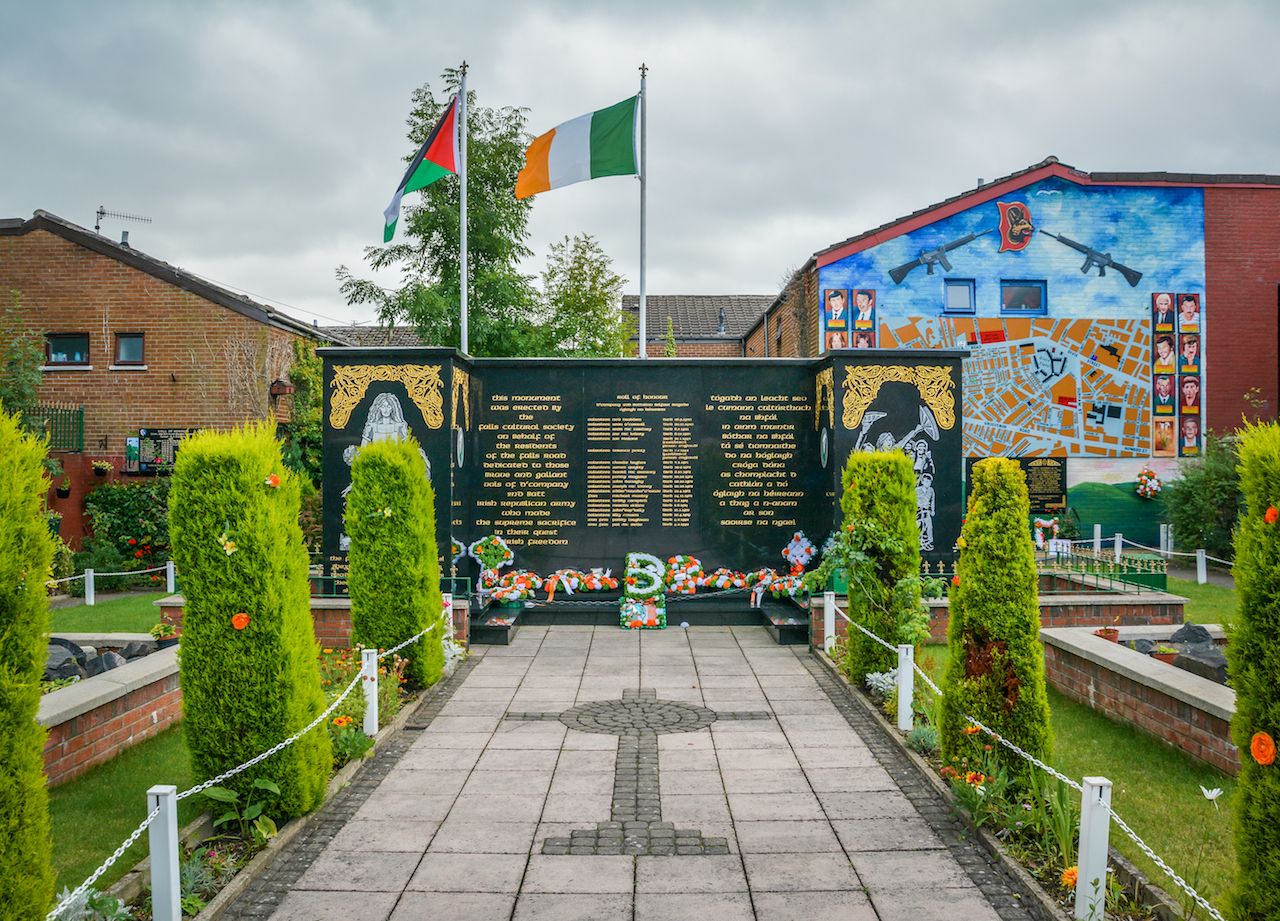 Multiple tour operators host Black Taxi tours, each shuttling groups around in classic black taxis from London of yore. A few top options are Black Taxi Tours, Taxi Tours Belfast, and Paddy Campbell’s. Over the course of 90 minutes, you’ll tour western Belfast with the guide and hear their take on the crisis of national identity that overcame Northern Ireland. Plan to pay about 40 pounds for two people (remember, Northern Ireland uses the pound sterling, while the Republic of Ireland uses the euro) and 10-15 pounds per each additional person. A tip of 5-10 pounds is welcome, especially if the driver really gets into the emotion and history behind the murals, as they tend to do. This emotion is what brings the murals to life. Sure, you can learn a lot about the Troubles at the Ulster Museum, which is worth a visit on its own, but nothing matches the experience of hearing about that tumultuous time period from someone who lived through it.

See The Troubles from both sides. 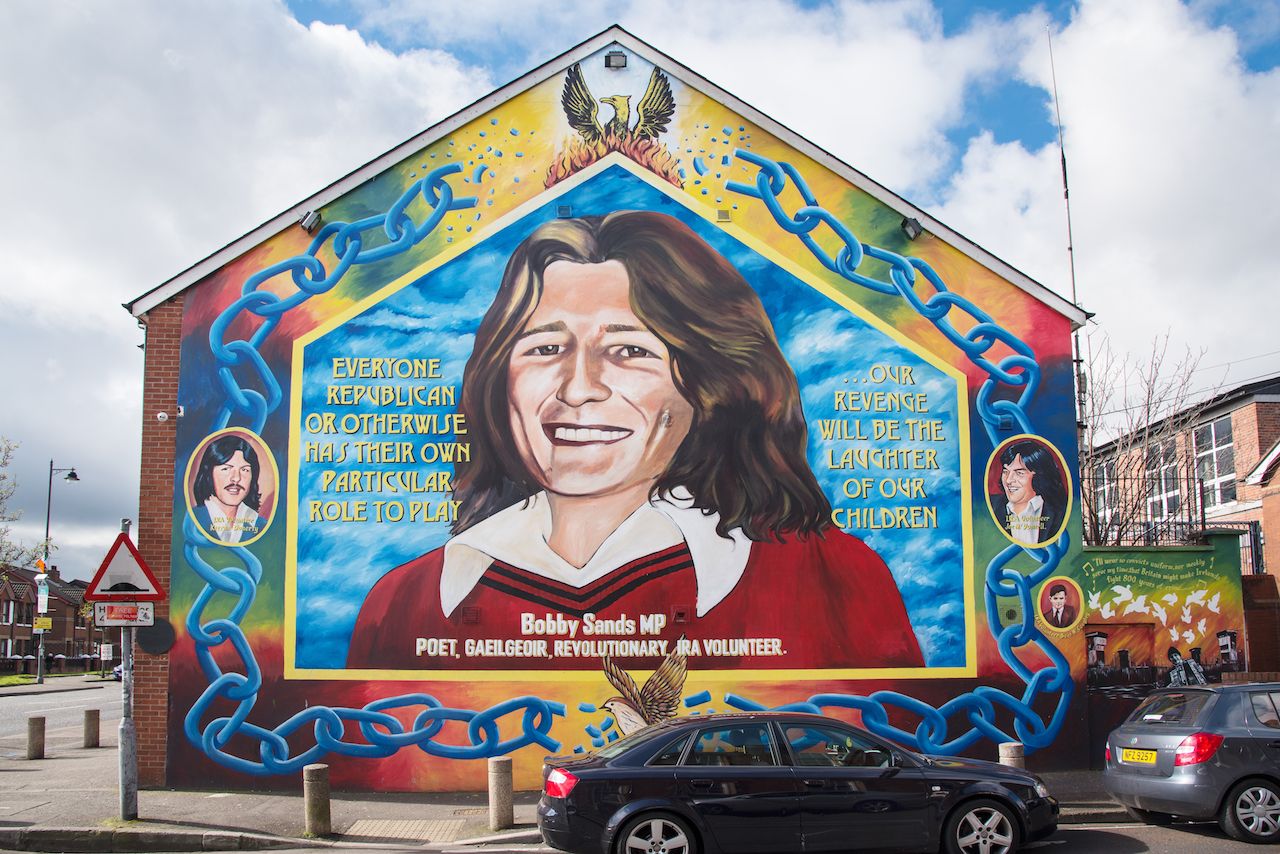 The main attraction of a Black Taxi tour is the political street art centered along two mains roads, Falls Road and Shankill Road. While adjacent to one another, these streets effectively occupy different worlds. Falls Road and its surrounding area, known as the Falls Road district, was the home of Irish Republicanism in Belfast beginning in the early 1970s. Many leaders from the multiple factions and incarnations of the IRA lived here, and this stretch of road running through the western part of the city is the central part of the tour. Here, many residents speak Gaelic, and Irish flags fly from porches and rooftops. You’ll stop by famous murals including the Bobby Sands Mural, which remembers an IRA fighter who famously perished from a hunger strike while in prison on weapons charges. The neighborhood also served as the home of the Irish Catholics’ civil rights movement, inspired by the American Civil Rights Movement of the 1960s. You’ll visit key sights including the Garden of Remembrance, which honors both fighters and civilians who lost their lives during The Troubles. 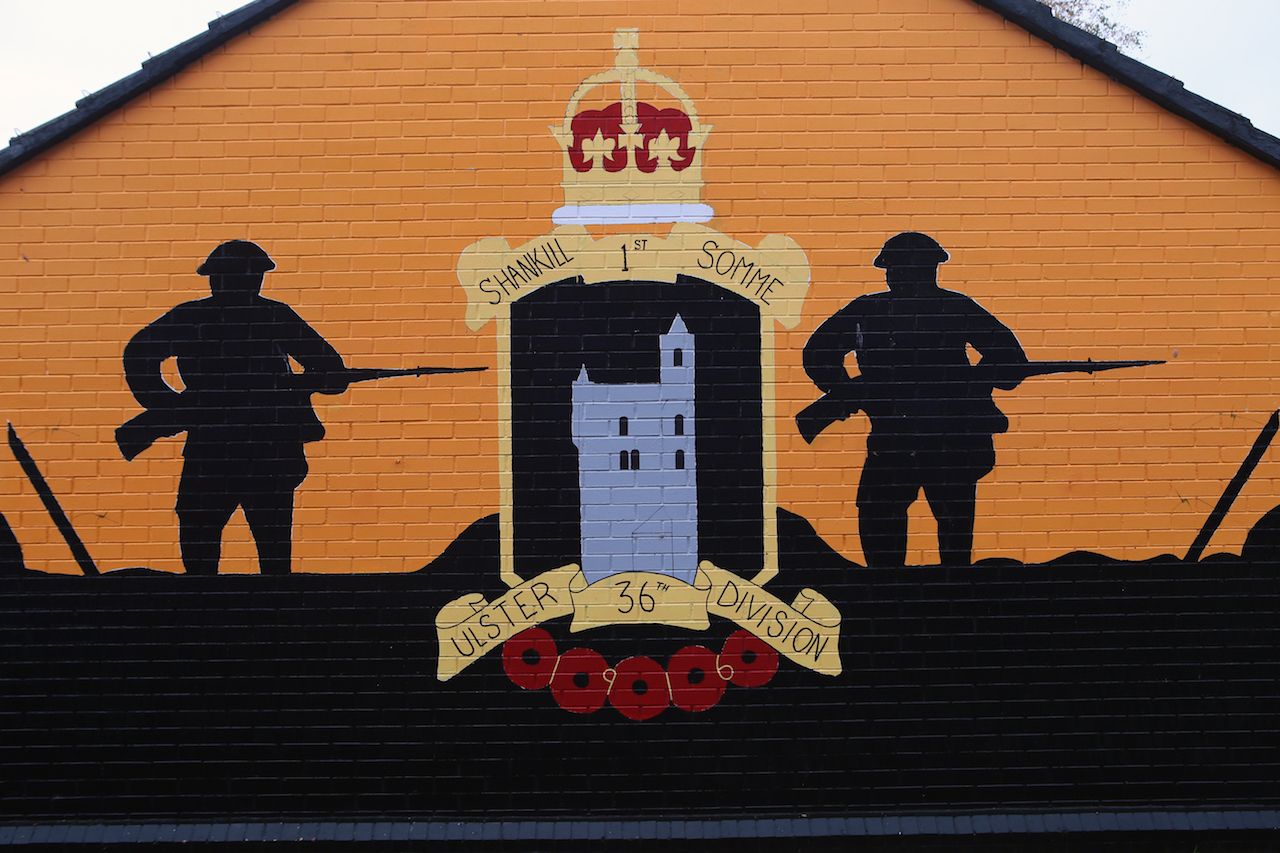 Across the marked peace lines and a massive wall is Shankill Road, lined with homes flying Union Jack and large murals claiming loyalty to Britain. The residential streets branching off of Shankill Road form a neighborhood called The Shankill, which your driver will escort you through. During the Troubles, this area was the hub for the Ulster Volunteer Force, a fiercely loyal band of pro-British activists formed in 1966, and the similarly active Ulster Defence Association, formed in 1971. The Shankill witnessed multiple vigilante bombings and violent attacks during Northern Ireland’s civil war, carried out by the IRA and commemorated by unionists in large murals on the sides of public housing projects and other structures.

Your driver will show you the most significant pieces, including the Ulster Covenant Mural and others known more simply as Loyalist Murals. The massive painting of paramilitary leader Stevie “TopGun” McKeag covers an entire side of an apartment building, and while the 25-foot-tall skeleton hoisting a machine gun that once adorned the painting has been removed, this tribute honoring a man believed to have killed no less than a dozen Irish Catholics is among the most highly decorated along Shankill Road.

Learn the true story of the “peace wall” bisecting the neighborhoods. 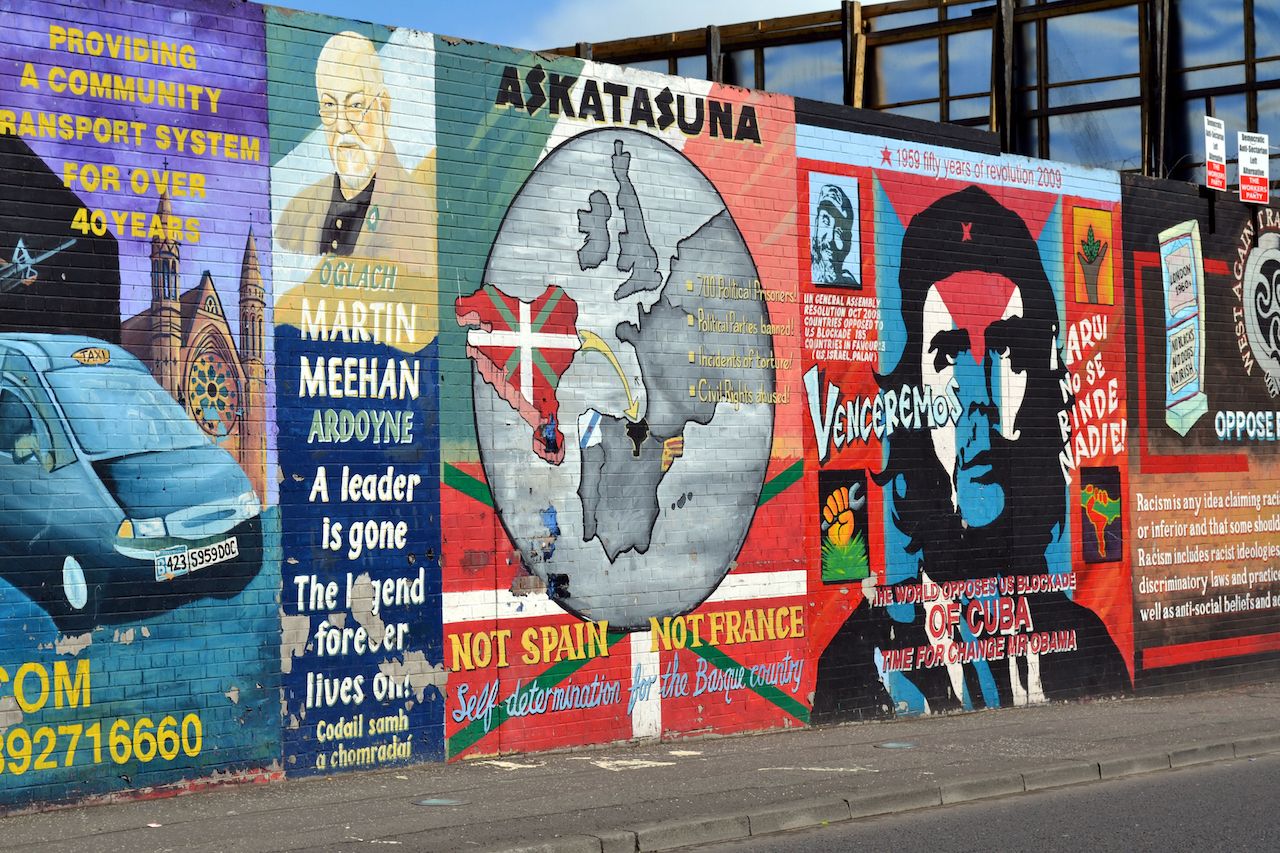 Belfast’s “peace wall,” one of 108 standing barriers from the Troubles still present across Northern Ireland, is the tour’s apex. Its erection in 1969 put a physical barrier between Catholic and Protestant neighborhoods and effectively tore a large part of the city in half, allowing passersby through only during daylight hours. The wall was meant to stop riots between factions, hence the term “peace wall,” but the wall was as much a checkpoint as a barrier, giving police the final say on who moved between the neighborhoods.

Even today, the wall is a physical representation of the tensions still present between the nationals and unionists. Though nothing like it was a few decades ago, schools around here are still largely separated between neighborhoods, with Irish Catholic and Protestant children often never meeting or interacting with each other despite growing up just a few blocks away from each other. The gates in Belfast’s peace wall still close at night. 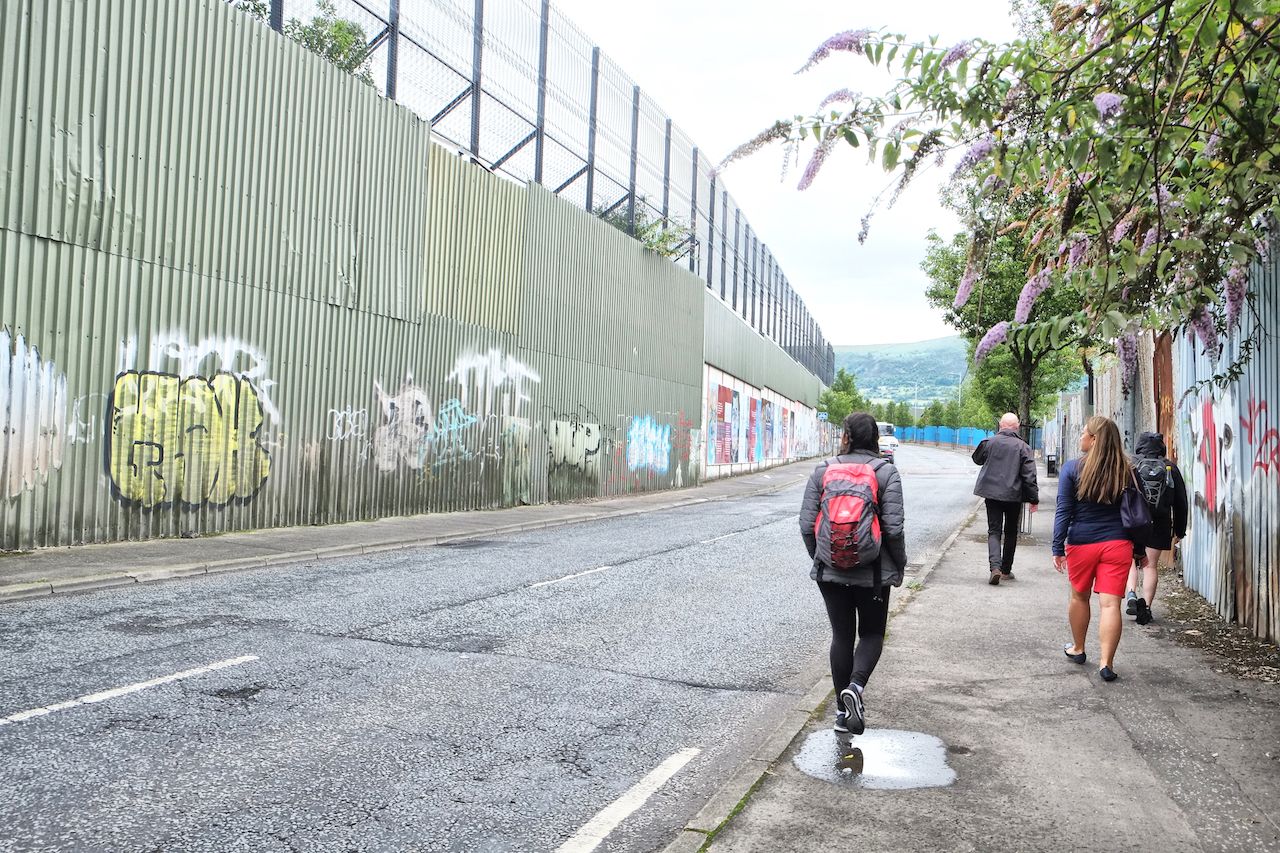 Along some sections, bright and vibrant murals cry out for an end to the segregation and mark the ongoing struggle for peace and stability. Many call for the outright teardown of the walls. The rights of the working class are a prominent theme in both murals and graffiti, some showing full-on Marxist rhetoric while others offer subtler pleas for peace. Some sections offer striking and impactful proclamations of loyalty and dissent, others are dominated mostly by the graffitied slogans, signatures, and scribbled calls for peace by residents and visitors. You’ll also find the wall advocating for different sides of other international conflicts, such as Israel and Palestine, as well as global figures of rebellion like Che Guevara. Whether or not you’re inclined to view a wall as a symbol of peace, this is a sight to behold, and one that will certainly move you. 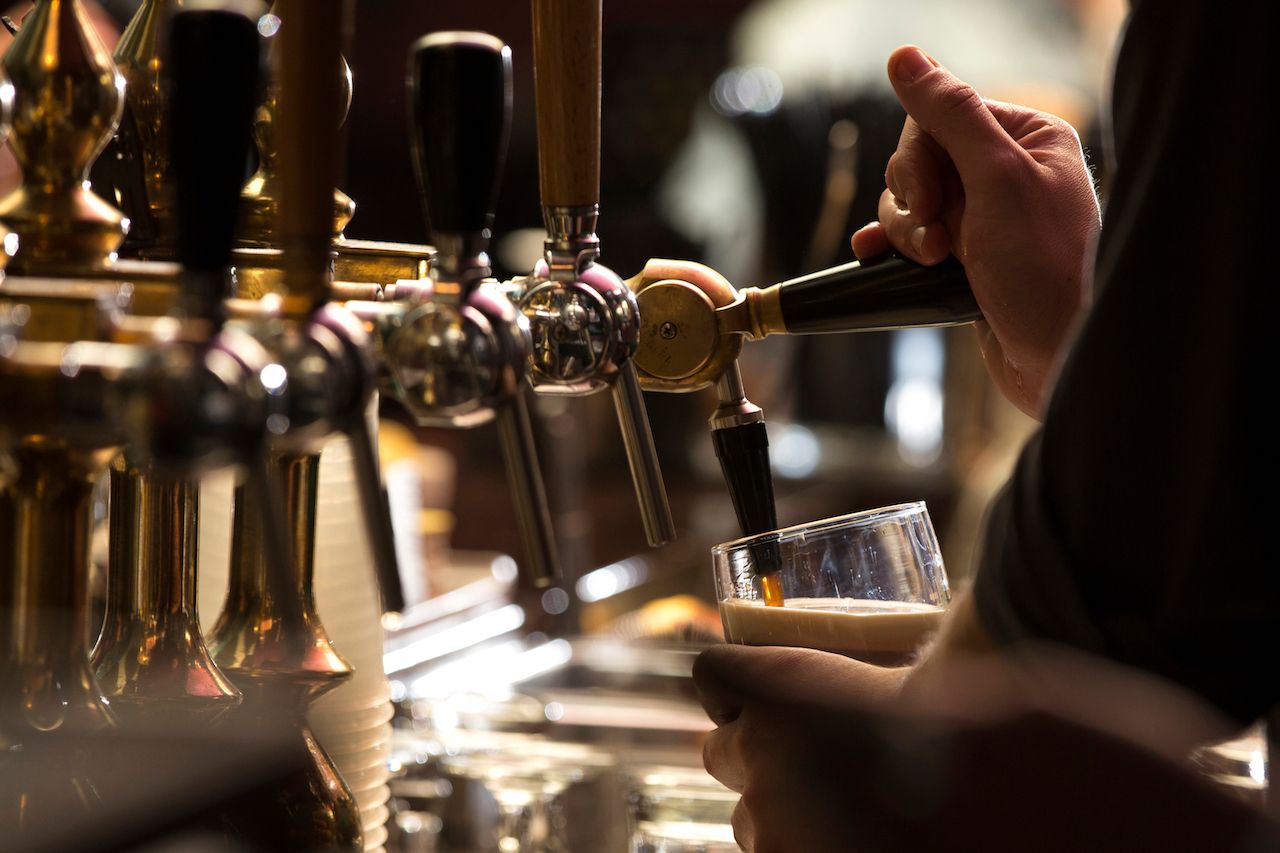 After touring the two neighborhoods, including several stops to get out and up close with the murals and peace wall, your driver will return you to your hotel or take you onto your next stop. You may find yourself craving a pint after such a heavy experience, and you’re in luck — your driver can recommend a few good pubs and can even drop you at the front door. You’re likely to view the city through a different lens after completing the tour, but take a cue from the locals and try not to be weighed down too heavily by what you’ve seen. The city doesn’t shirk from its shadow, but it’s also rebuilt and moved on. To experience Belfast is to appreciate all sides of it: its grizzly, somber past and its bright, ever-evolving future. So take it all in and reflect over a beer, then join in with the locals for good craic and lighter conversation — you’ll find them much keener to debate you over sports.

The 6 Best Places for Breakfast in Belfast

The Best Places for Live Music in Belfast