No one travels to Egypt for the beaches or the wildlife — everybody comes for the ancient sites. From the Pyramids at Giza to the Valley of the Kings and the Luxor Temple, the country is filled with immense, millennia-old structures often shrouded in mystery. But, despite being the objects of myths and legends, these beautiful, ancient monuments are far from being kept secret. In fact, they’re so well-known that they’re almost constantly swarmed with visitors and vendors. These crowds often take away from the amazement one should feel when looking at these structures. Thankfully, there are still a few sites that aren’t covered in tour buses and camel ride offers.

To get the under-the-radar tour, we spoke with Christina Chavez, an archaeologist in the Greater Southwest Region of the US. Her knowledge of working in the desert and overall archaeological experience took her to Egypt five times to work on a large archaeological project project run by the NYU Institute of Fine Arts archaeological research program in Abydos. During her multiple visits, she was trained by egyptologists and became fascinated with the country’s history. She also had the chance to travel around Egypt several times and visit many lesser-known sites with immense historical and cultural value. These are a few of her favorites that you shouldn’t miss.

1. The Temple of Horus in Edfu

The Temple of Horus is located in the town of Edfu on the West Bank of the Nile. Although it’s only 68 miles south of the famous city of Luxor, this site is often missed by tourists who travel directly by bus or train from Luxor to the very popular Abu Simbel temples. 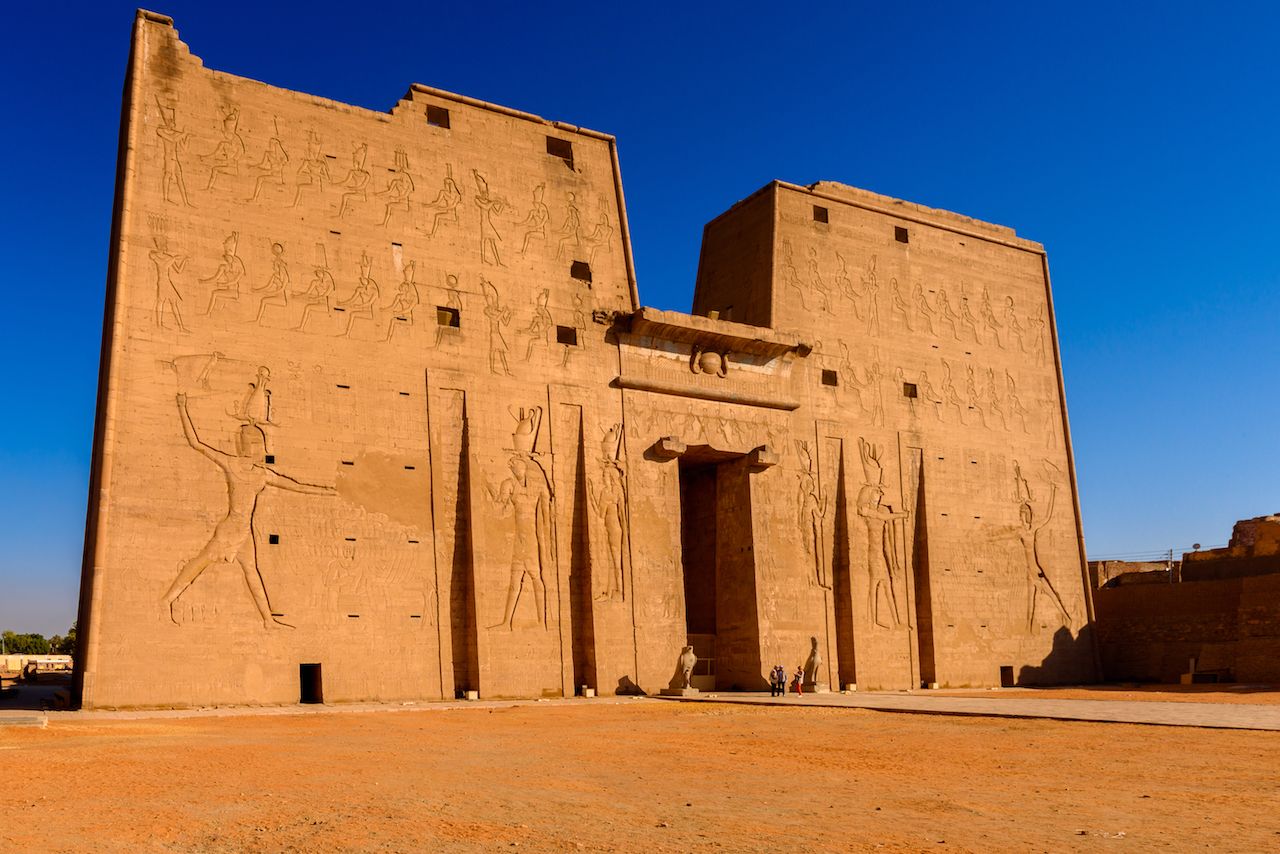 Built out of sandstone between 237 and 57 BC, it’s one of the best-preserved monuments in all of Egypt. The temple was dedicated to Horus, an ancient god in the form of a falcon, whom you can see depicted in the reliefs on the temple’s pylon and as large granite statues at the entrance to the monument. Past the gateway is a large courtyard surrounded by carved columns and decorated with reliefs. At the end of the courtyard, the doorway to the temple’s library, halls, and tenebrous chambers, is guarded by a statue of Horus. 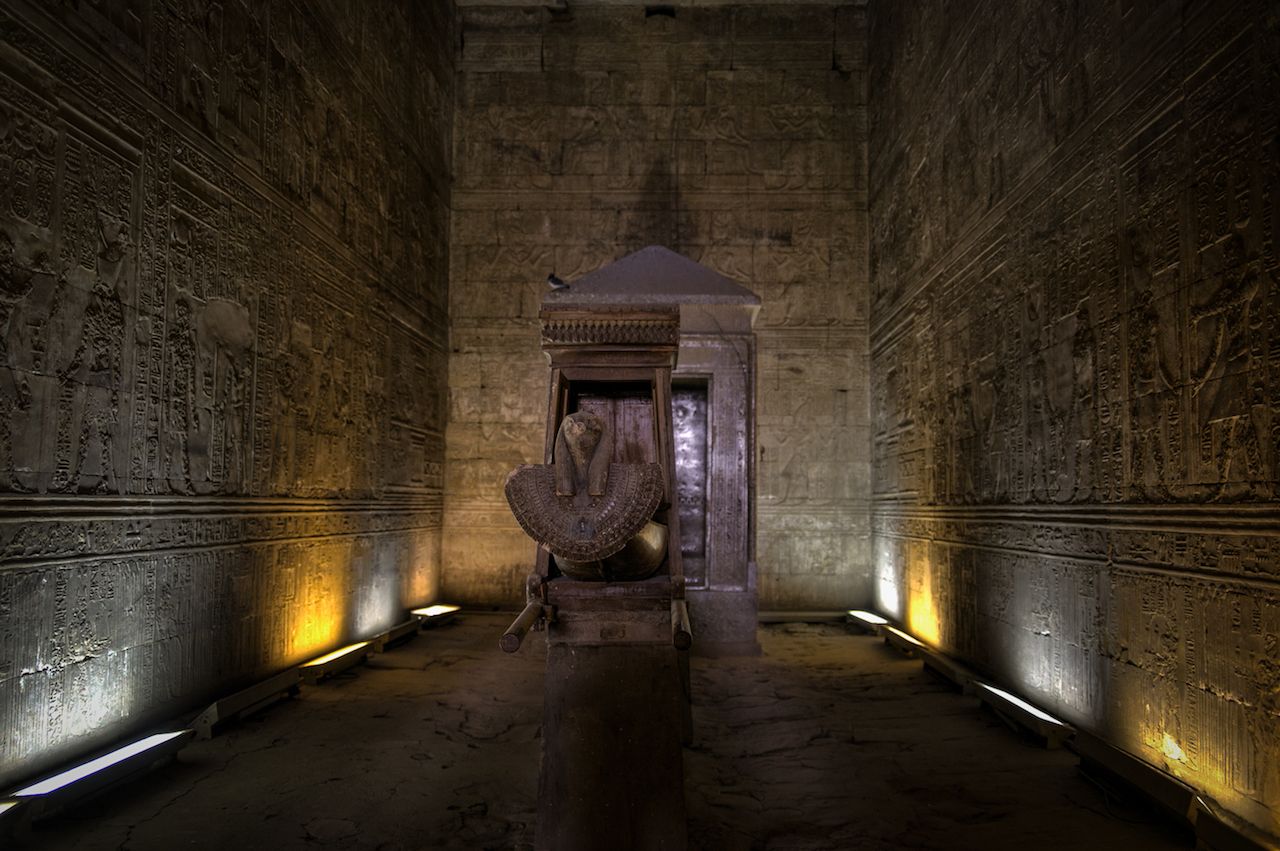 Inside, visitors can admire incredibly ornate rooms where altars and shrines that were used to worship Horus still stand. From inside one of the halls, go up the steps to get to the rooftop to take in the view of the Nile. Chavez recommends the Temple of Horus because it’s not as busy as other ancient sites, but also because it’s a great place to see 2,000-year-old carving, reliefs, and hieroglyphs in beautiful conditions and learn about Egyptian mythology.

2. The Temple of Hathor at Dendera 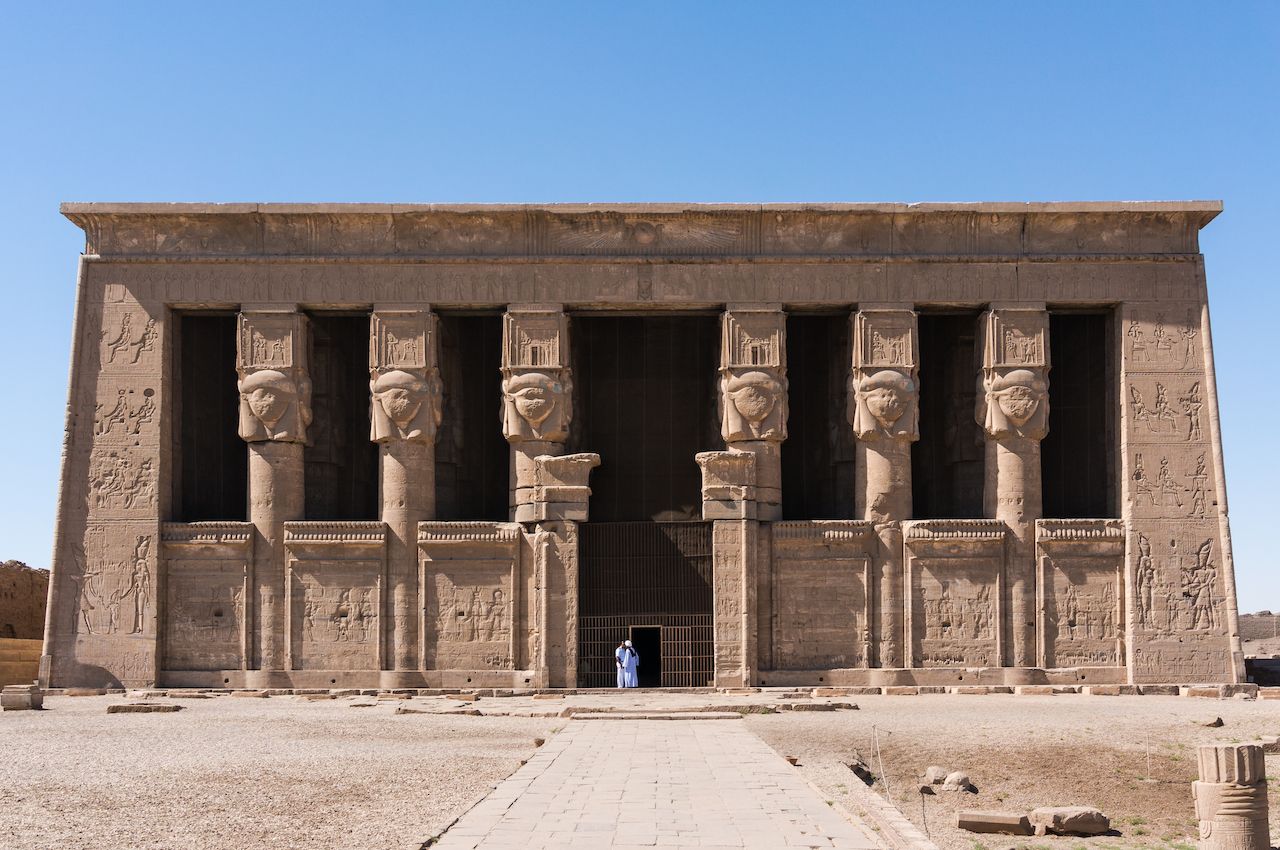 Only 52 miles north of Luxor on the West Bank of the Nile, the temple of the goddess Hathor is incredibly well-preserved and free of crazy crowds. Hathor was said to be the spouse of Horus and is represented as a cow or as a woman wearing cow horns and a sun disk. Hathor is a significant figure in Egyptian mythology, hence the large temple dedicated to her. 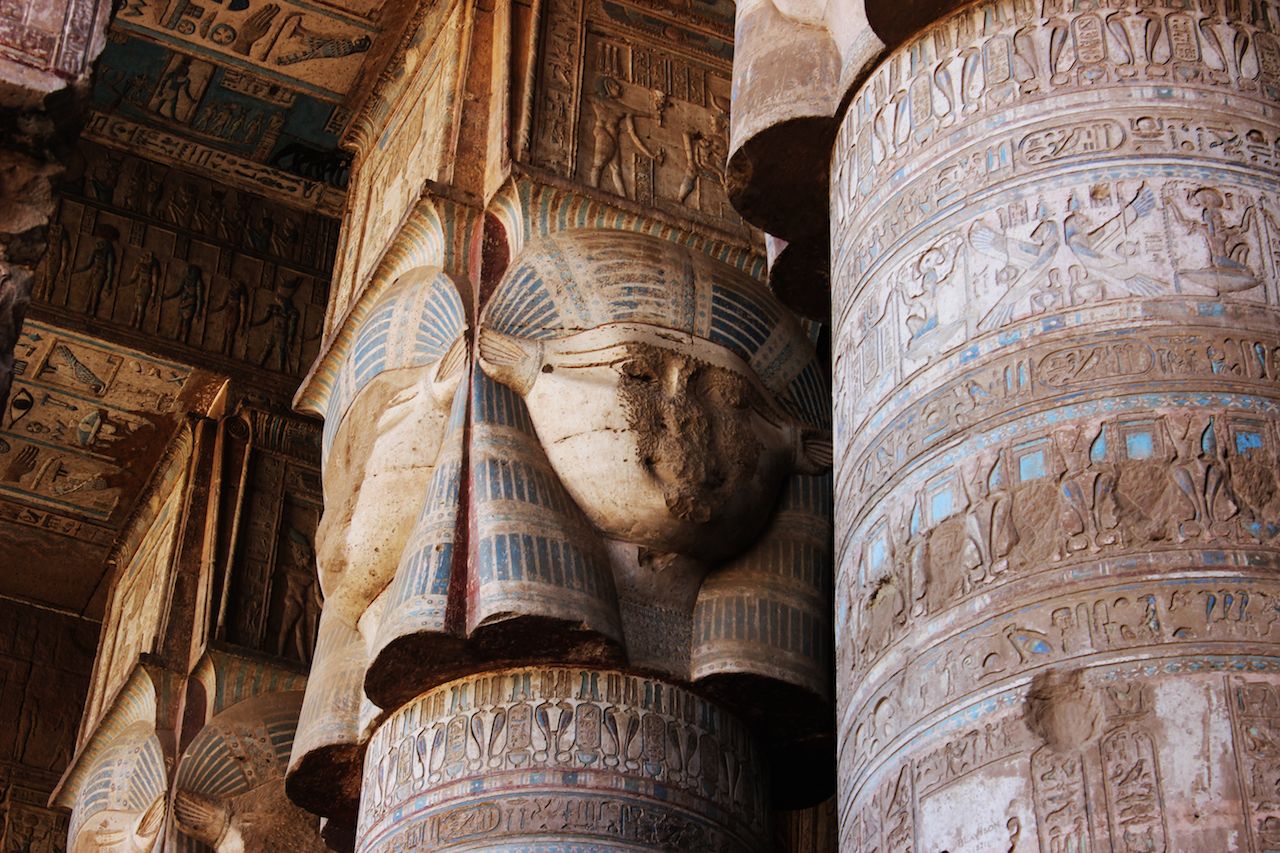 The walls around the temple complex are covered in reliefs and hieroglyphs, including a scene depicting Hathor breastfeeding her son. Through the gate, visitors can access the several buildings that make up the temple complex, as well as the temple itself. The facade of temple is covered in reliefs and decorated with six columns into which the head of Hathor is carved. Note that those six carvings were defaced later on by Christians. As you step in, the first hall, containing 24 columns, is ornate with hieroglyphs and carvings of Hathor that still bear the original paintwork, and is an impressive sight. You can access the rooftop of the temple via a staircase located in the next room. From there, you can see the entire complex.

3. The Red Monastery in Sohag 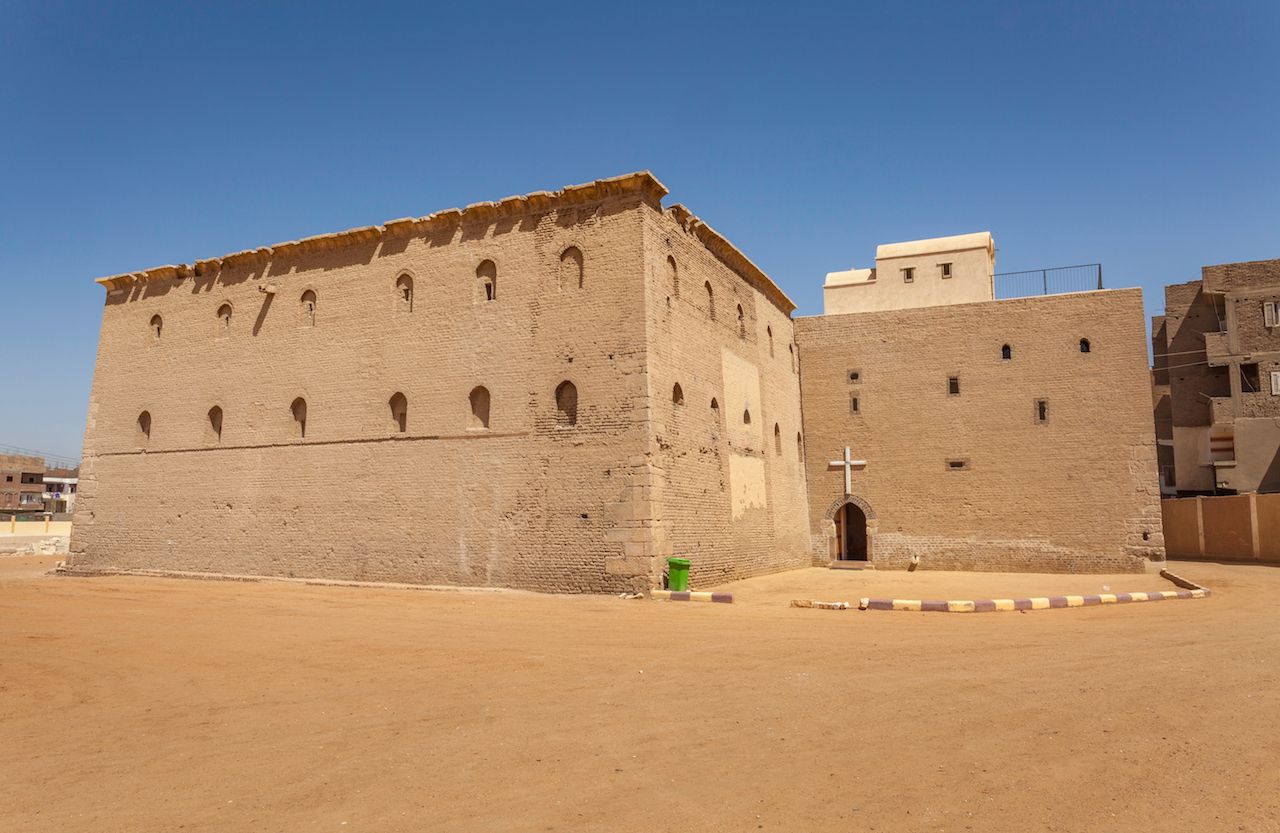 Although vestiges of pharaonic times is what most visitors to Egypt seek, it’s only one part of the country’s rich history. Christianity and monasticism spread through the country as early as 45 AD and Christian communities flourished, rejecting the old pagan traditions.

The Red Monastery, located in Sohag, is a town on the West Bank of the Nile and 150 miles north of Luxor, and is a remnant of the start of monastic life in the world. It’s dedicated to Saint Pishay, its founder. The fourth-century monastery may look austere from the outside, but the inside is spectacularly lavish with paintings and sculptures. According to the American Research Center in Egypt, “In this church, late antique paintings cover about 80 percent of the walls, niches, columns, pilasters, pediments, and apses.” After being restored from 2002 to 2014, the Red Monastery is now open to visitors and used by the Coptic community. 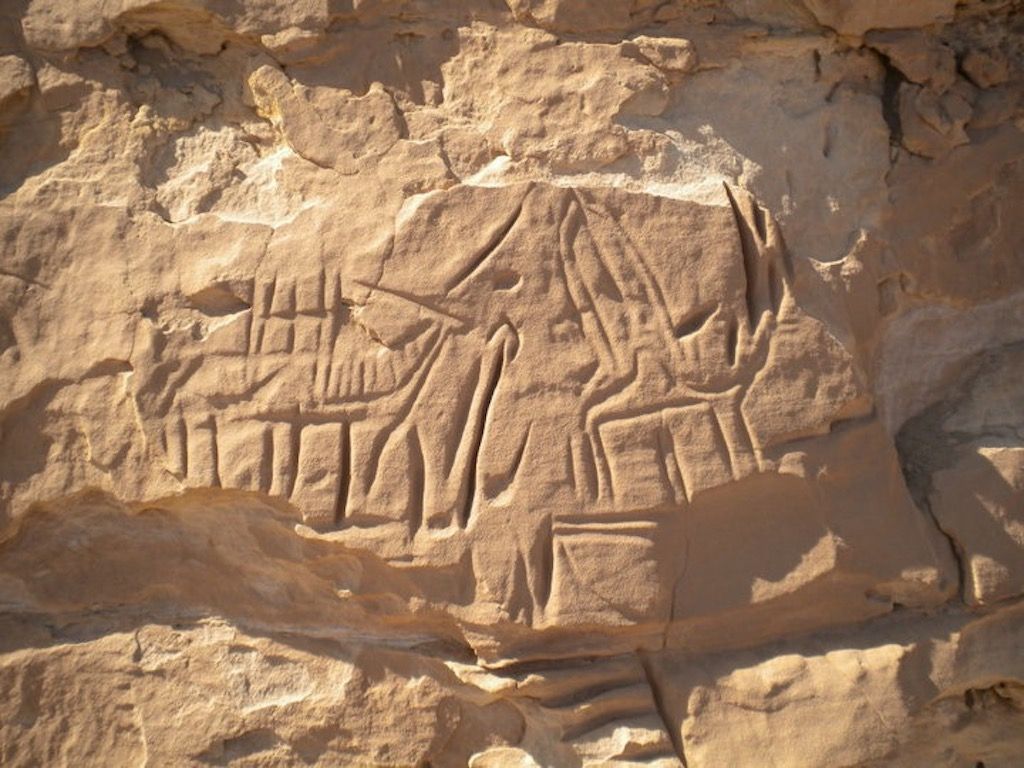 In the same way that the story of Egypt didn’t stop with the pharaohs, it didn’t start with them either. The petroglyphs from Kharga Oasis in the Western Desert are sandstone rock carvings dating back from prehistoric times onward. There are several rock art sites in the area between Al-Kharga and Dakhla Oasis, and getting there isn’t easy, so you’ll need to ask around Al-Kharga for a guide in a 4×4 to drive you to the appropriate spots. One thing’s for sure: there won’t be crowds getting in your way to check out the animals, boats, humans, geometric designs, and inscriptions found on the rocks. Chavez highly recommends that travelers to Egypt check out this area to get a larger picture of the country’s history — if you thought the pyramids were old, you’ll be amazed by the carvings of giraffes, elephants, donkeys, fish, and even hippos from hundreds of thousands of years ago.

Siwa Oasis is the perfect spot for those who really want to get away from it all. It’s in the Western Desert, a good eight-hour drive from Cairo, and very close to the border with Libya, so, despite hosting amazing historical sites, it’s not driving the crowds. Chavez suggests that you check out the following two sites in Siwa: 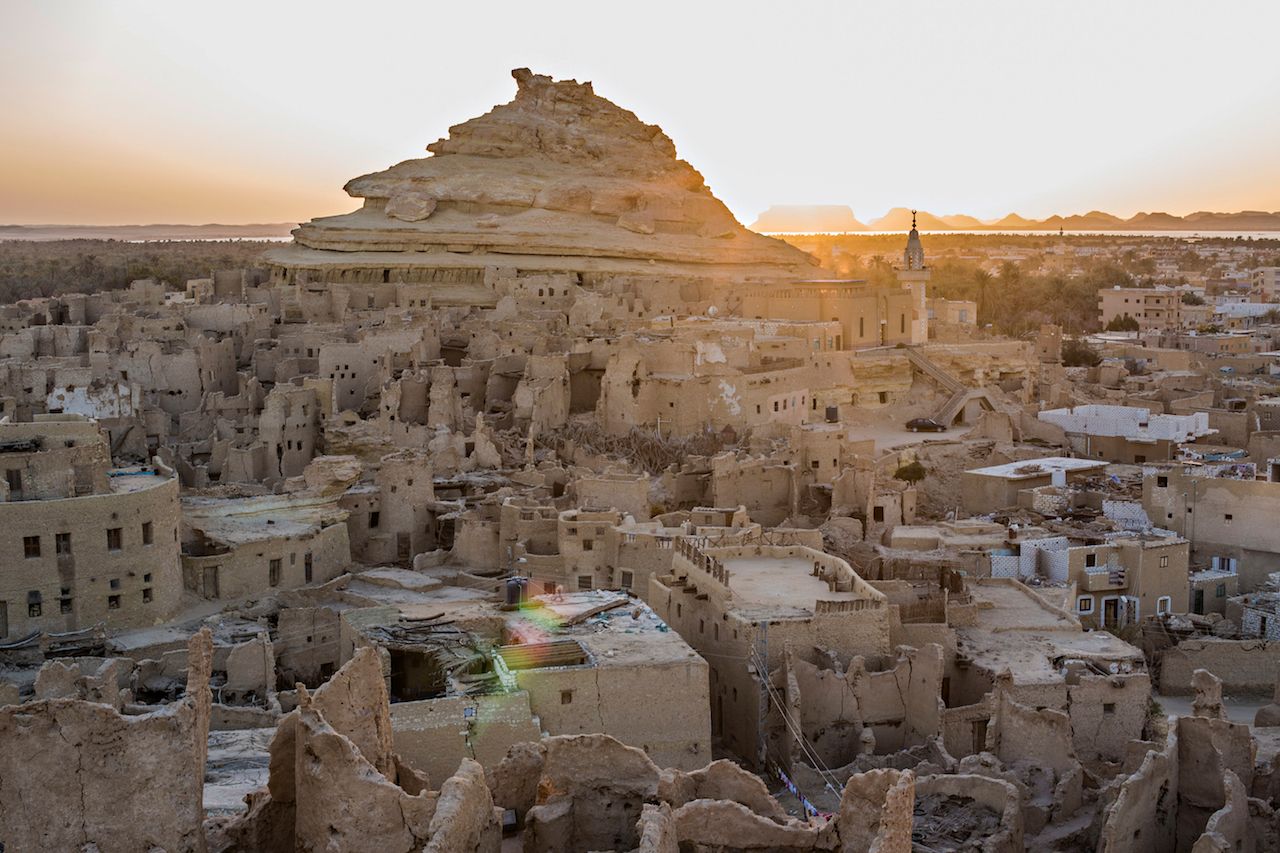 The shell that remains of the 13th-century fortress is an impressive structure built out of a unique material: karshif, a mud produced naturally through the calcification of earth mixed with salt from the lake outside of town. The fortress was inhabited by the people of Siwa until a storm destroyed most of it and forced the locals to move to more modern accommodations in the early 20th century. The site looks like a ghost town maze and is well worth checking out. For a great view of the fortress from above, climb up to the Old Mosque. 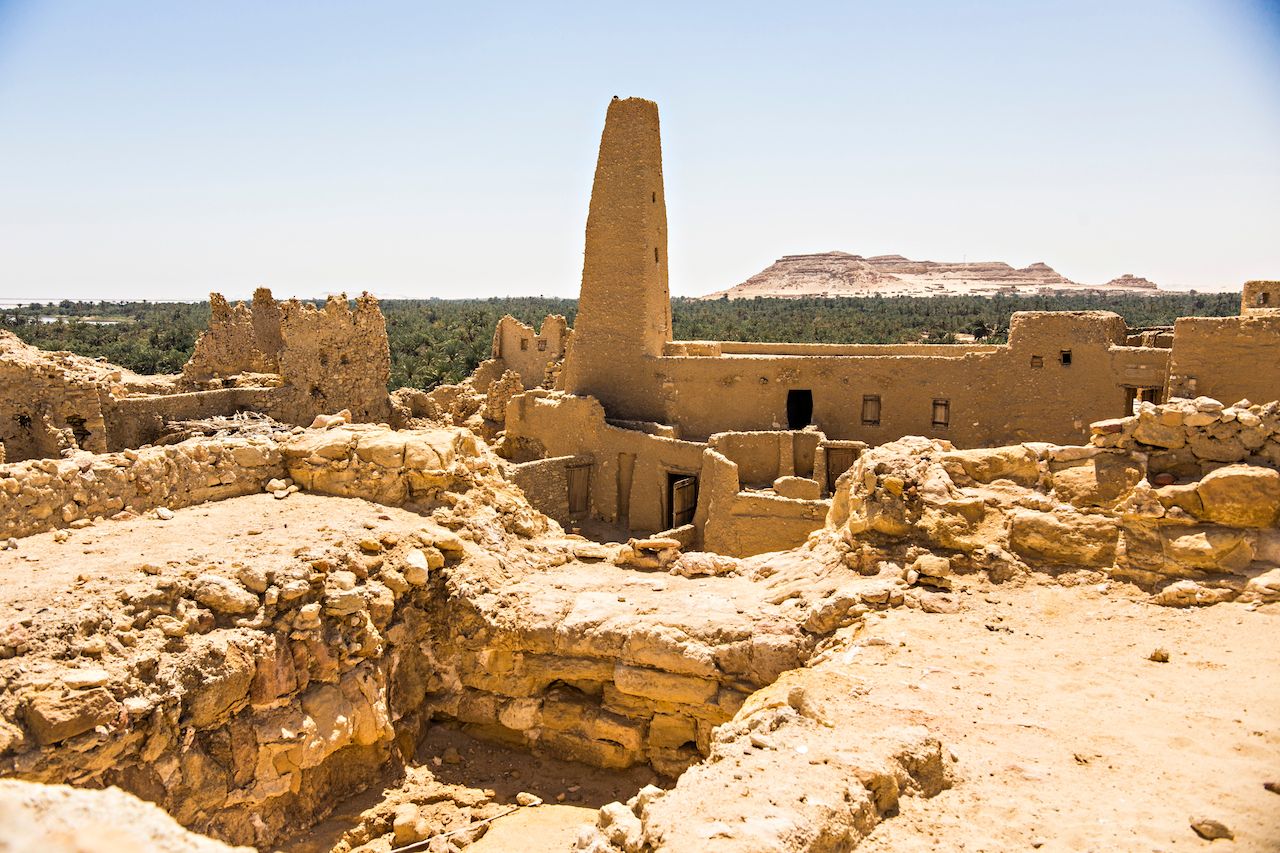 The temple of the Oracle, built in the sixth century BC, was dedicated to Amon, a god in the shape of a curly-horned ram. The prophecies of Amon were taken very seriously and brought fame to the small town of Aghurmi. Even Alexander the Great, upon invading Egypt, visited the Temple of the Oracle to hear what life had in store for him. The views of the oasis from the temple are also spectacular.

6. The Temple of Seti I in Abydos 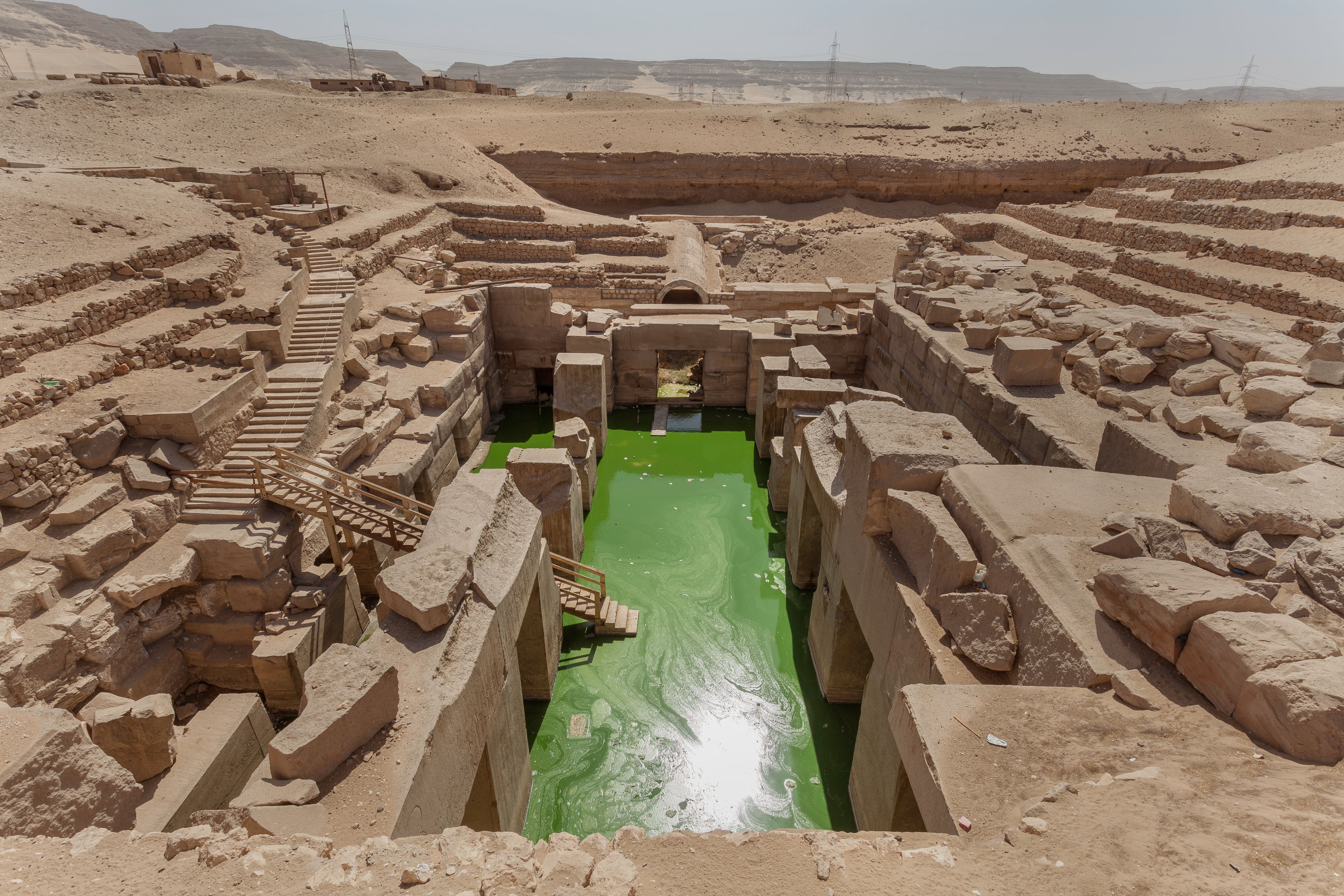 Abydos is a city located about 100 miles north of Luxor on the West Bank of the Nile. Because most historical sites are located along the river, a stop in Abydos can easily be added to an itinerary. And, really, you shouldn’t skip Abydos because the city used to be the center of worship for Osiris, the god of the dead and the afterlife, and one of the most important gods in Egyptian mythology. Abydos was used as a necropolis for thousands of years — this is where the tombs of the first pharaohs of Egypt were found and a place most Egyptians strived to be buried. Also, Abydos is so underrated that Chavez explains that she found herself almost completely alone on her visit to the Temple of Seti. 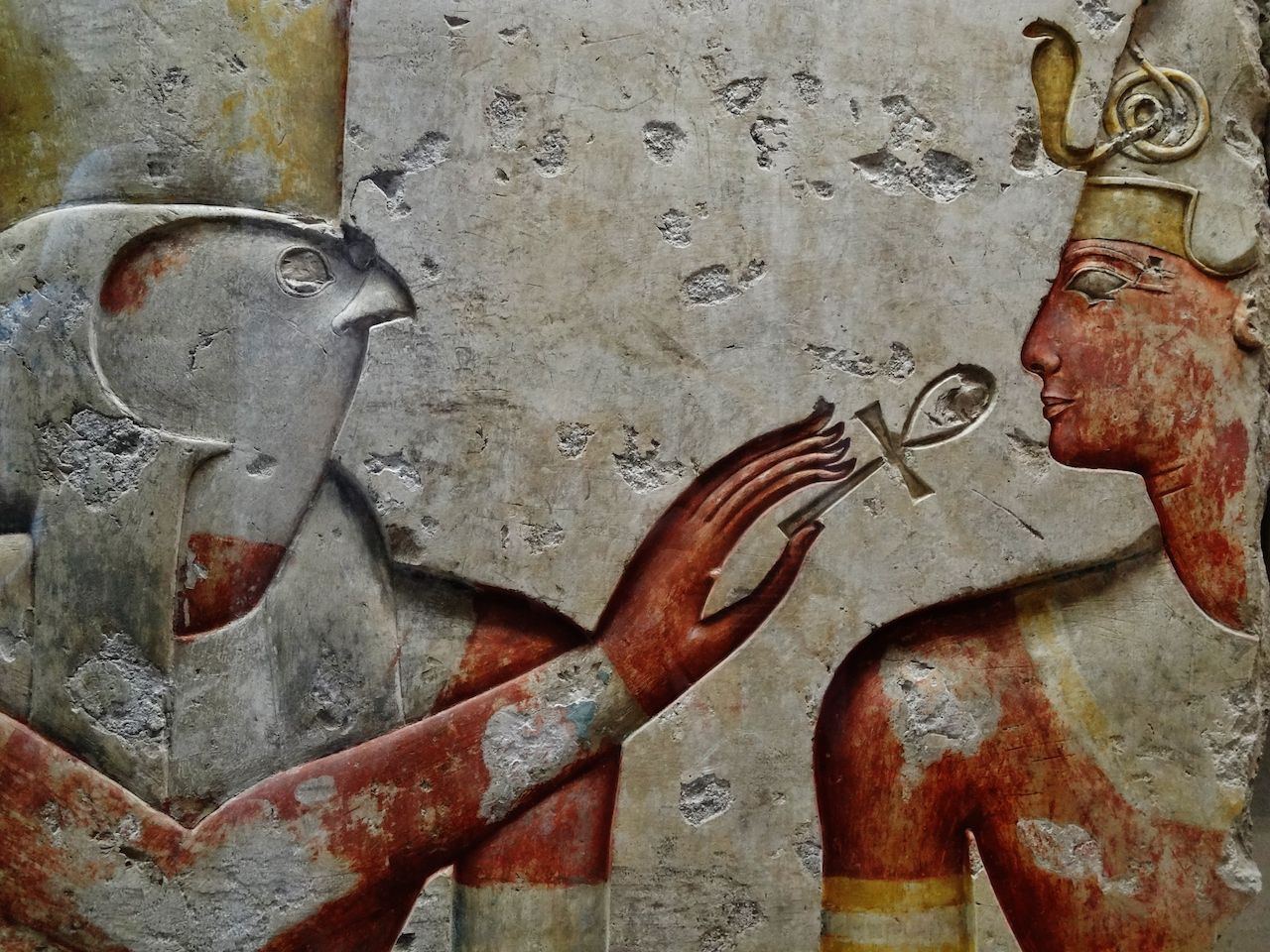 The Temple of Seti I is an incredibly well-preserved mortuary that used to be considered one of the most sacred places in all of Egypt. It was built under King Seti I in 1300 BC and was dedicated to the veneration of the king himself and six significant Egyptian gods: Osiris, Isis (Osiris’ sister and wife), Horus (Osiris and Isis’ son), Amon-Ra, Ra-Horakhty, and Ptah. Parts of the L-shaped temple complex have been destroyed (courtyards and pylons), but the portico with a pillared facade still stands, decorated with reliefs where Ramses II (son of Seti I) is shown with the gods. Inside there are columns, gloomy halls, chambers, and seven sanctuaries for each of the divinities reverated here. The walls of the temple are intricately decorated with colored reliefs and hieroglyphs depicting scenes of religious significance. At the back of the temple is the Osireion, a cenotaph to Osiris that is completely flooded and therefore impossible for egyptologists to study in detail.

Shunet El-Zebib is the site where Chavez has worked during every one of her trips to Egypt. The Shunet El-Zebib is a funerary cult enclosure for King Khasekhemwy of the Second Dynasty dating back to 2650 BC, located in the sacred city of Abydos. The site covers several square miles and is the only standing funerary enclosure in the necropolis of Abydos. According to the World Monuments Fund, “The structure is one of Egypt’s oldest standing royal monuments and one of the oldest preserved mud brick buildings in the world” and it’s “the only example of this earliest tradition of royal monumental funerary construction that still exists.”

The Shunet El-Zebib was built before the pyramids and served as an example for their construction. It also influenced the design of the Step Pyramid complex of Khasekhemwy’s successor King Djoser, the first royal pyramid built in Egypt. Now that the structure has been stabilized by 150,000 mud bricks made exactly like the original ones, visitors have only just recently been allowed to visit this amazing, but widely underrated site and, if not, capture the view of the grand enclosure towering over the sand dunes.