There are lots of random food-centered holidays in the United States, but in May there is actually one worth celebrating: National Barbecue Month, which pays tribute to one of the most beloved and legendary culinary and cultural traditions in the country. Chef’s Pencil is celebrating barbecue in a surprising way by ranking the best and worst cities in the US for barbecue, based on user reviews.

Even if you didn’t realize that it was National Barbecue Month, you probably know that Americans have strong opinions about where to find the best barbecue in the country. Some people pledge their allegiance to Texas-style barbecue while others profess that actually, either New Orleans or Kansas City is home to the best barbecue. The debate is fierce and fiery and will probably rage on as long as people are around the barbecue (so hopefully forever).

It’s not uncommon for travelers curious about the US’ barbecue offerings to plan entire trips around where to sample as many smoked meats as possible, but with so many differing opinions on the best barbecue city, it might be difficult to decide where to stop. So Chef’s Pencil analyzed TripAdvisor reviews for barbecue restaurants in the country’s 75 largest cities and “ranked the cities based on their average rating.” It was a big undertaking: All told, the company raked through reviews for 2,020 barbecue restaurants, ultimately landing on a list of 62 of the best and worst cities for barbecue.

Barbecue enthusiasts might be intrigued (and even perturbed) to learn that Texas doesn’t occupy the first or second spot — no, those titles go to (drum roll please) New Orleans and Oklahoma City, respectively. Charlotte, Wichita, and Virginia Beach tied for third place (you can check out the full ranking for yourself here). 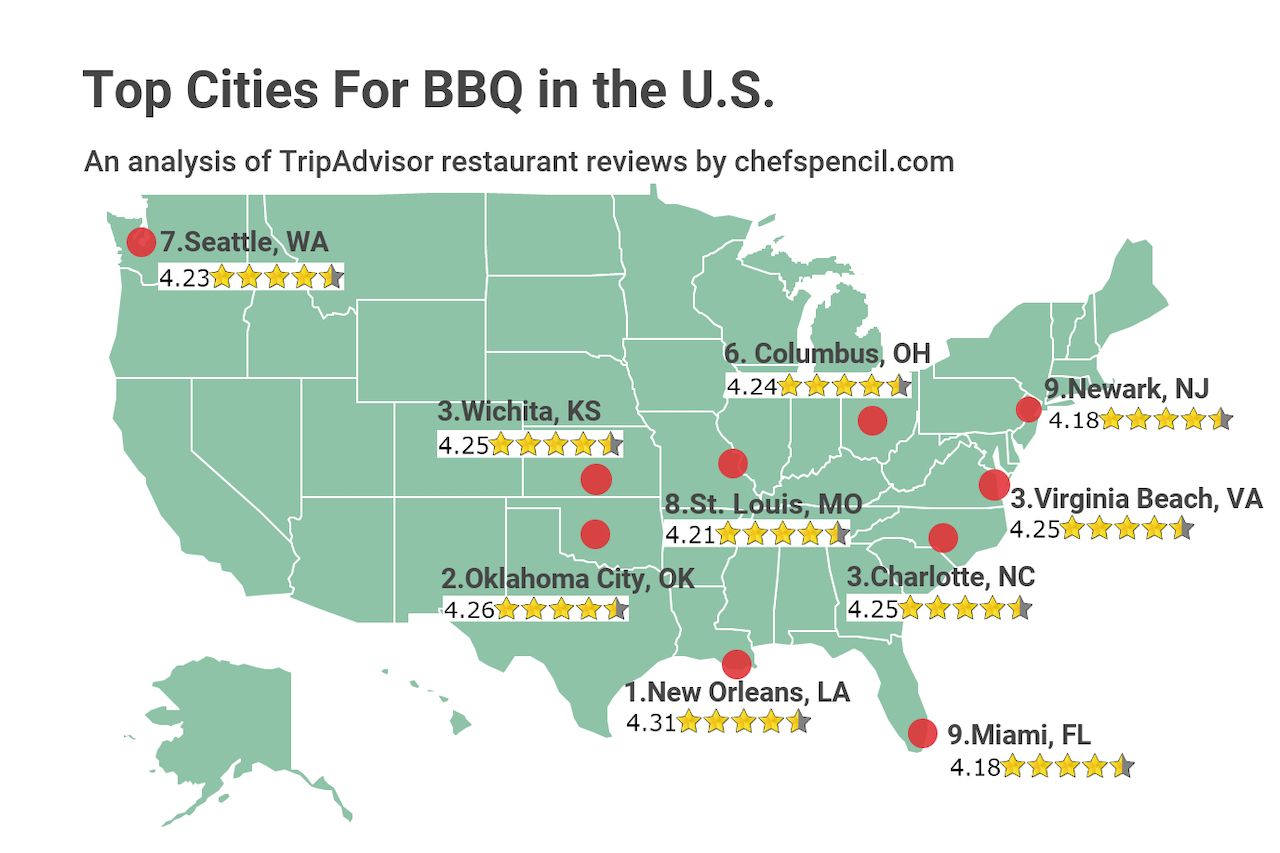 St. Louis, MO, also made the cut, at spot number eight. That shouldn’t come as a surprise to anyone familiar with barbecue — the state, particularly Kansas City, has a thriving barbecue scene.

Now for the worst of the bunch: Anchorage, Plano, Boston, San Antonio, and Aurora ranked at the very bottom of the list.

It might be prudent to take restaurant reviews with a grain of salt — after all, there’s a chance the reviewer simply didn’t like their waiter, had a long wait for a table, or isn’t familiar with how barbecue should taste or be served.

So does any of this data mean that Texas barbecue is overrated? You’ll just have to visit and decide for yourself.

A Great White Shark That Attacked in California May Be One of the Biggest in the World
Visitors To Niagara Falls Can Get a New, Never-Before-Seen View From a 100-Year-Old Tunnel
This Map of World Gas Prices Puts Rising Rates Into Perspective
50% of Canadians Live South of This Line
Flight Prices Are Up 40 Percent Since January. Here’s How Much Higher It’ll Get This Summer.