When you think of barbecue, you probably imagine barrel smokers and ribs slathered in sauce, but a few regions come to mind, too. Near the top of the list is Kansas City. Alongside Memphis, the Carolinas, and most of Texas, Kansas City is a haven for barbecue lovers. Actually, love isn’t a strong enough word when it comes to how residents feel about their barbecue. It goes much deeper than that. Barbecue is in their DNA.

“I really think that Kansas City is the home of the best barbecue,” says Emily Detwiler, CEO of the Kansas City Barbeque Society. ”If you ever talk to anyone on a plane to Kansas City, and you ask what they are going to eat, they say barbecue. Kansas City and barbecue are so synonymous with one another.”

Barbecue here is unrivaled. In Kansas City, you’ll find legendary barbecue restaurants operated by award-winning pitmasters, some which have been making barbecue in Kansas City for generations. And it’s not just coming out of restaurants. Barbecue is a part of every neighborhood, every community — every driveway, basically.

“On any given Sunday you are going to see people with their smoker on the driveway,” says Detwiler. “You see people rolling out the smoker from the garage.”

Perry began selling his slow-cooked meats, which he wrapped in newspaper, out of an old trolley barn around 1908. Perry cooked all the classics like beef and pork, but he added possum and raccoon to the mix, too (which probably wouldn’t fly today). Perry’s barbecue joint thrived during the jazz age. He became such an iconic purveyor of meat that his death certificate listed him as the “barbecue man.”

Perry helped develop the style for which Kansas City would become famous: Here, pitmasters smoke the widest variety of meats (pork, beef, chicken, sausage, turkey, and even fish) using the low-and-slow method. It’s all topped off with a generous topping of barbecue sauce. Today, with around 100 barbecue restaurants, Kansas City is known as the “world’s barbecue capital.” It’s also home to the American Royal World Series of Barbecue.

These are the elements that make Kansas City’s smoked meats so beloved and the city’s best restaurants where you can try it for yourself.

A thick, sweet, molasses-based sauce is the hallmark of Kansas City barbecue. This deep burgundy, almost plum-colored, sauce is flecked with pepper. It’s immediately recognizable (unless you’re from North Carolina where barbecue is entirely different). It has a slight tang from vinegar, a hit of sweetness from tomatoes and molasses, and a kick of spice via red pepper flakes and garlic. The finish is a smoky aftertaste courtesy of paprika. A well-executed barbecue sauce is complex and layered, and America has Kansas City to thank for this iconic flavor.

“A sweeter flavor is preferred around here, but a lot of the restaurants put their own spin [on sauce],” Detwiler explains. “Some people are going to add more heat to it. People might thin it out a little bit more. But because the sauce does tend to be on the sweeter side, people’s palates are more open to it. The vinegar style in the Carolinas is more polarizing. People either love it or hate it. From a palette pleasing perspective, Kansas City [barbecue] does rank higher in that regard.”

When it comes to a dry rub (a mix of spices applied during the cooking process), less is more. That’s not the case everywhere. In Memphis, a thick layer of dry rub is usually applied to the meat. While most Kansas City barbecue restaurants will certainly apply a dusting of dry spices, the focus is more on the sauce. 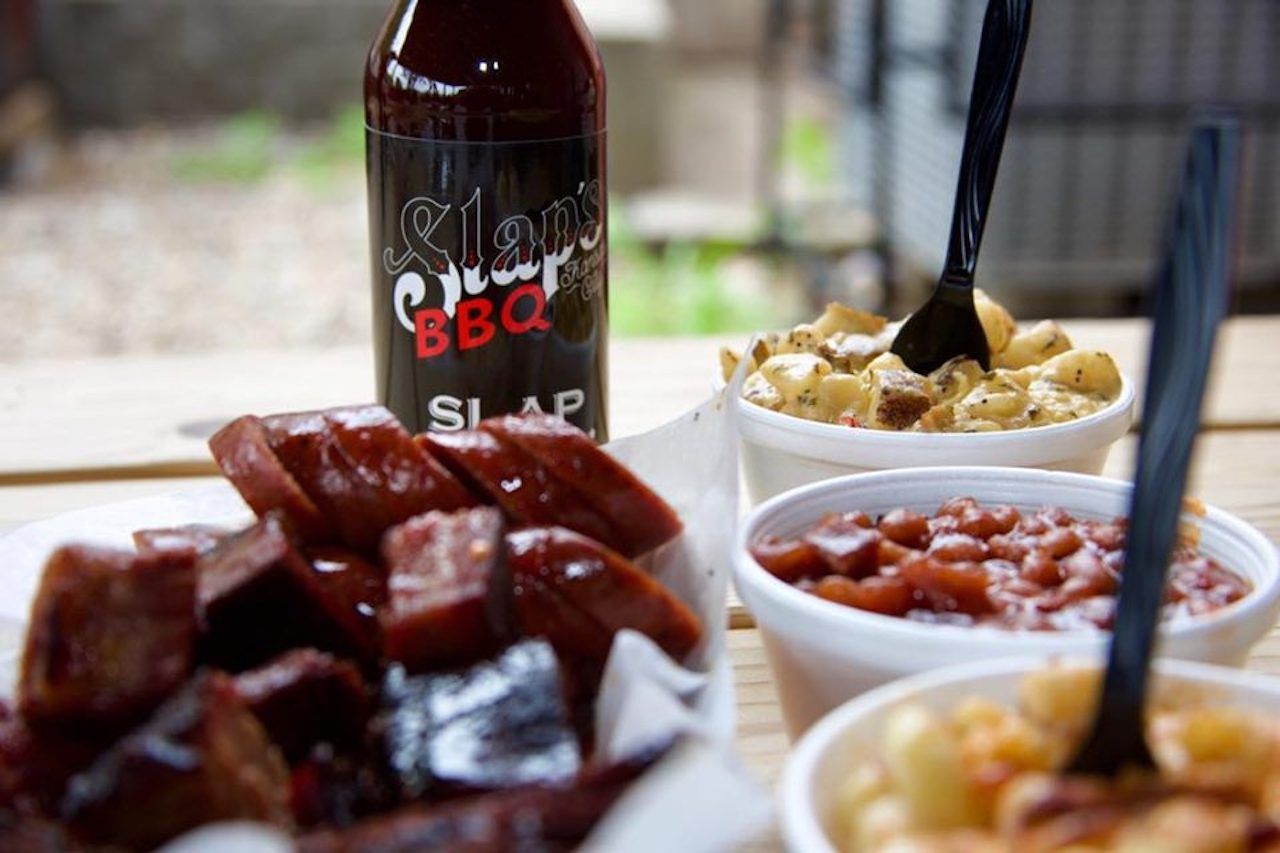 In Kansas City, barbecue is prepared using the popular low-and-slow method (the opposite, of course, is hot and fast). Low and slow is exactly what it sounds like: cooking the meat in a pit barrel or charcoal grill at around 200 to 250 degrees over a period of many hours — as little as five or as many as 16. This method is better suited for bigger, fattier pieces of meat than standard grilling.

While the Carolinas prefer pork and Texans are more partial to beef, you’ll find every type of meat on the smoker in Kansas City, from beef, pork, and pork ribs to chicken, brisket, and turkey. On the competition circuit, which is big in Kansas City (more on that below), pitmasters are judged on their pork ribs, pork shoulder, chicken, and brisket.

No matter what meat you choose to adorn your plate, you cannot neglect the side dishes. The sides complete the meal, and each region has its own favorites. In Kansas City, you’ll find the customary slice of white bread alongside a bevy of side dishes to make sure you leave the restaurant stuffed.

“Some of the staples around here are going to be baked beans and coleslaw. Something else you’ll find around here is a cheesy potato or a cheesy corn bake,” Detwiler says. “You don’t see as much okra as you might in Memphis or the Carolinas. But people definitely take their baked beans pretty seriously around here.” 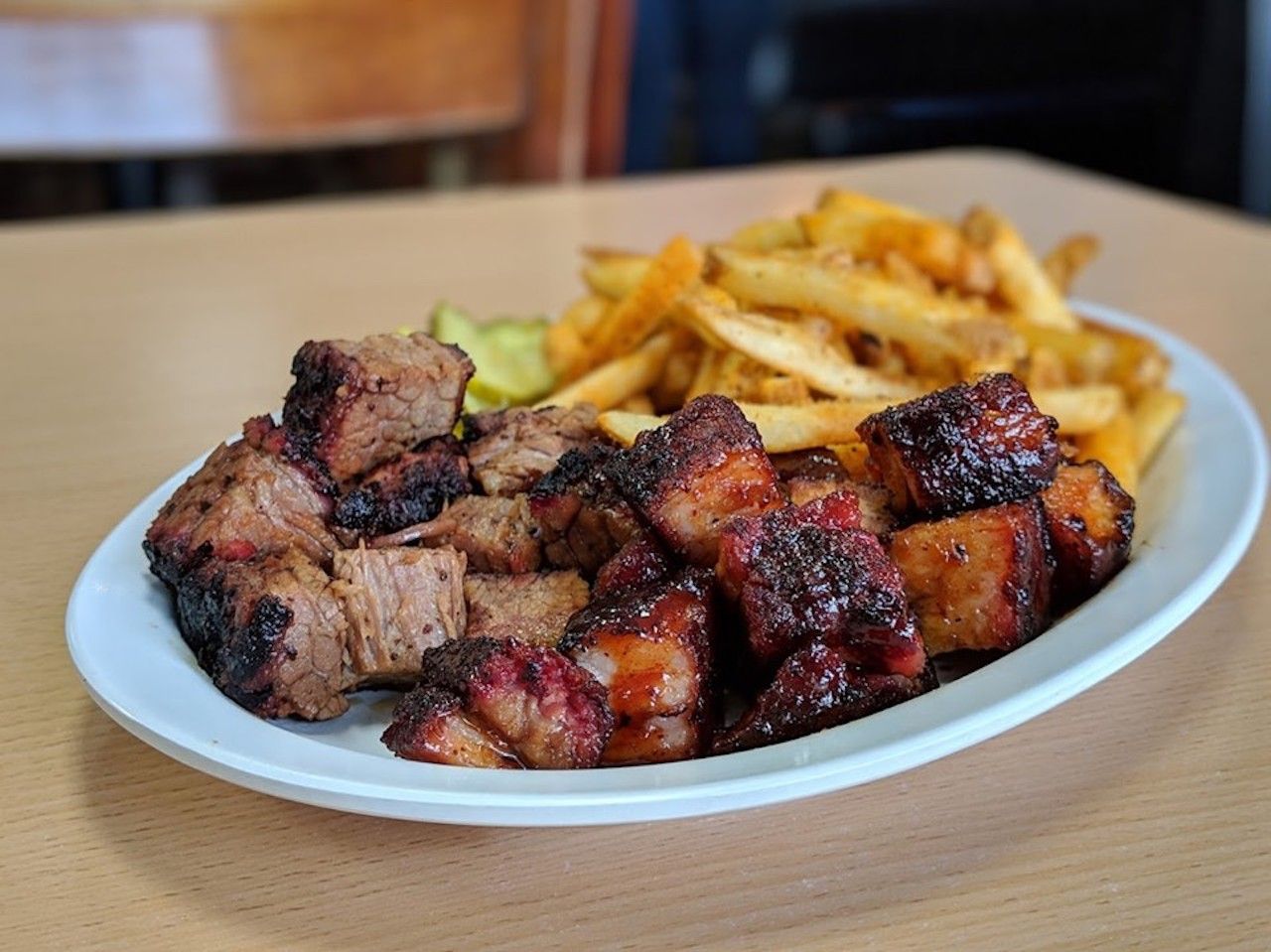 Each barbecue region has its own speciality (in Texas, for instance, it’s brisket). If there’s just one type of barbecue you need to try in Kansas City, it’s burnt ends, which are the charred bits at the end of a hunk of brisket.

“Barbecue was a working man’s food. The burnt ends are what’s left over from the brisket,” Detwiler says. “People who were running the pits had to eat last and that’s what they got.”

These days, burnt ends have emerged as a beloved barbecue dish, and you can find it on the menu at pretty much every barbecue restaurant. But the original burnt ends are a Kansas City innovation, and they’ll likely taste better here than anywhere else in the country. All the fat that renders down from the brisket imbues the burnt ends with a rich, salty flavor, ideally leaving the meat tender and juicy, yet crispy at the same time.

“A really good burnt end should be almost caramelized,” explains Detwiler. “It should have a little bit of a bark on it, some good texture, but it shouldn’t be charred. That’s the difference. People tend to overdo them, so then they are tough and hard to chew and just don’t taste good. You also see some that aren’t done enough, so the fat hasn’t rendered.”

Although burnt ends harken back to the very first days of Kansas City barbecue, some restaurants are now trying to innovate the classic dish — with surprising results.

“In the last couple of years, I’ve seen more restaurants trying to emulate burnt ends with pork belly,” says Detwiler. “They’re cooking it the same way so that the fat is rendering down even more and getting a little more bark on the ends, and it is absolutely delicious.” 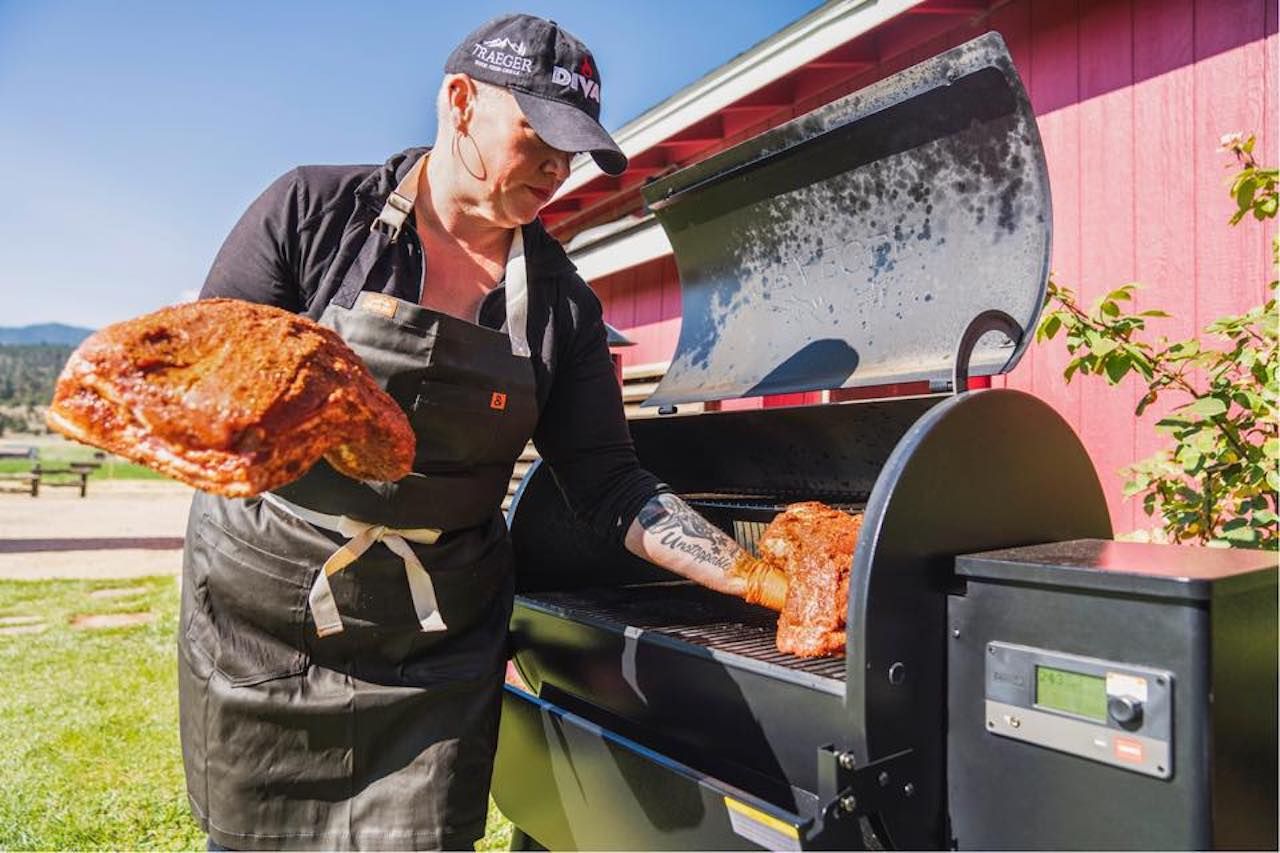 This year, the 40th anniversary of the biggest and most prestigious barbecue competition in the country, the American Royal World Series of Barbecue, took place from September 12 to 15 in Kansas City. At the open portion of the competition (there is also an invitational) 485 teams participated, arriving from Kansas City, South Africa, Mexico, and Australia. If you want your barbecue to be trophy-winning, you go to Kansas City.

The American Royal World Series of Barbecue is at the apex of these competitions. Winning means securing immediate respect in the barbecue community, and maybe even the opportunity to open your own restaurant.

“It’s a lot of bragging rights and helps people with their restaurants,” says Detwiler. “Having that American Royal trophy… it means that people are more willing to go to your restaurant because the quality has been proven.”

Whether you’re cooking it in your backyard, serving it in a restaurant, slinging ribs on the competition circuit, or if you just love to eat it, every Kansas City barbecue aficionado has one thing in common: They take great pride in their meats.

“Kansas City is barbecue,” says Detwiler. “It is just barbecue.”

Where to eat the best Kansas City barbecue 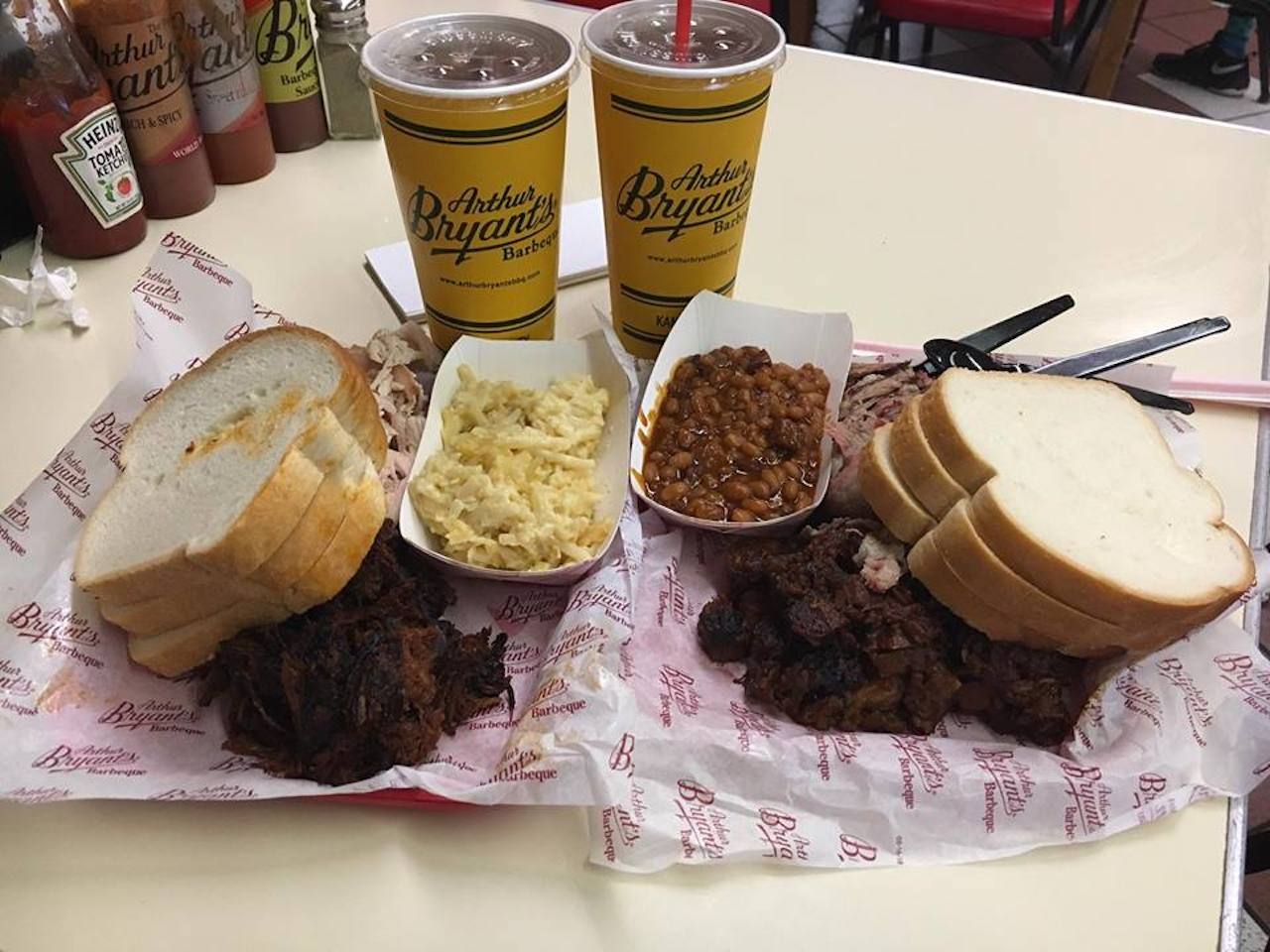 According to local legend, Arthur Bryant invented the now-famous Kansas City sauce. His brother Charlie worked with Henry Perry, and when Arthur visited he fell in love with barbecue, too. The brothers operated a barbecue restaurant together, then Arthur look over the family business in 1908. In a 1972 article for Playboy, Calvin Trillin wrote, “It has long been acknowledged that the single best restaurant in the world is Arthur Bryant’s Barbeque at 18th and Brooklyn in Kansas City.” 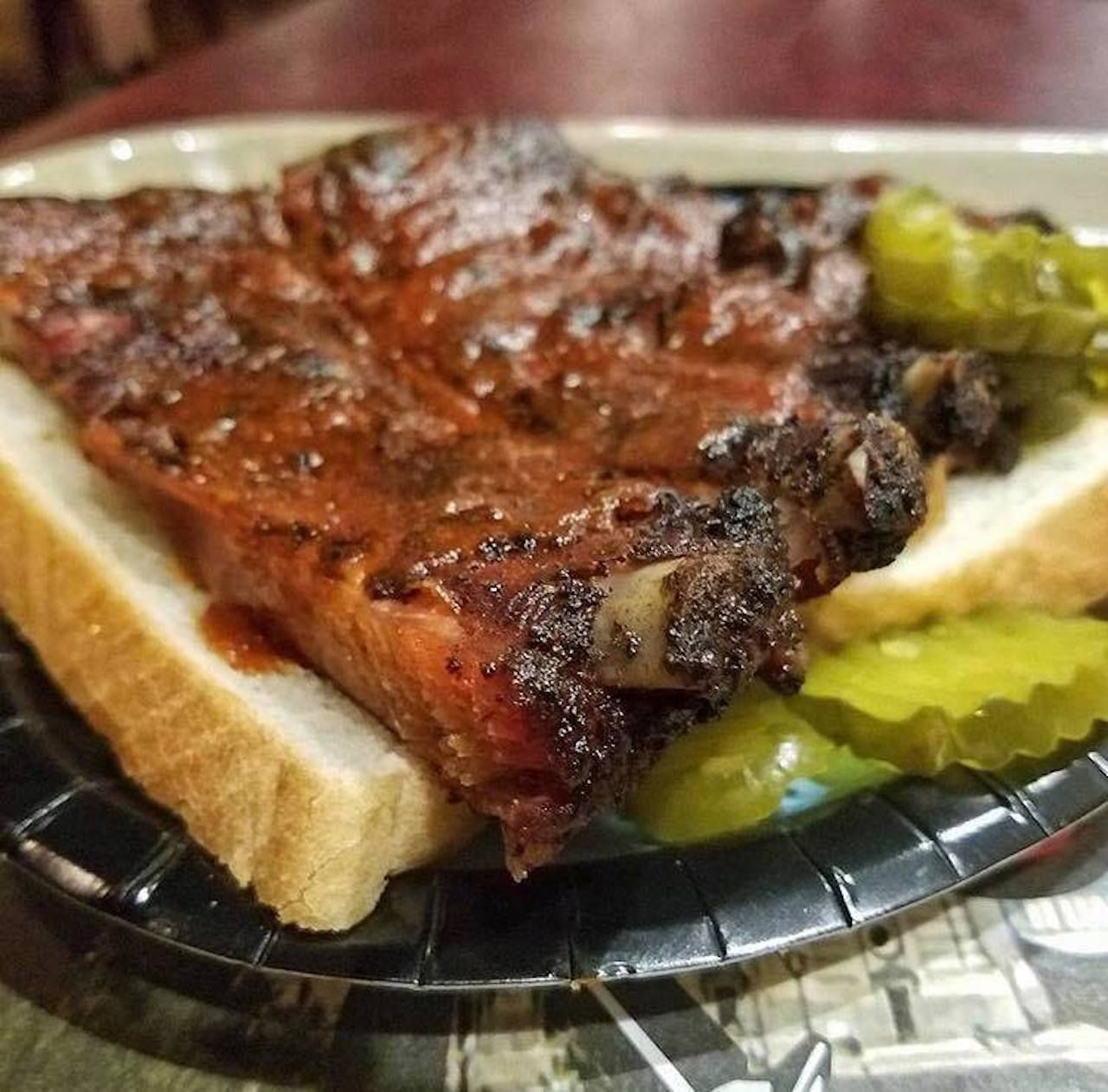 In 1946 George W. Gates abandoned his career on the railroad and opened his first restaurant. Today, Gates Bar-B-Q has six locations in Kansas City, and its products, like barbecue sauce, are sold in grocery stores. George W. Bush and Bill Clinton have both visited Gates for lunch. 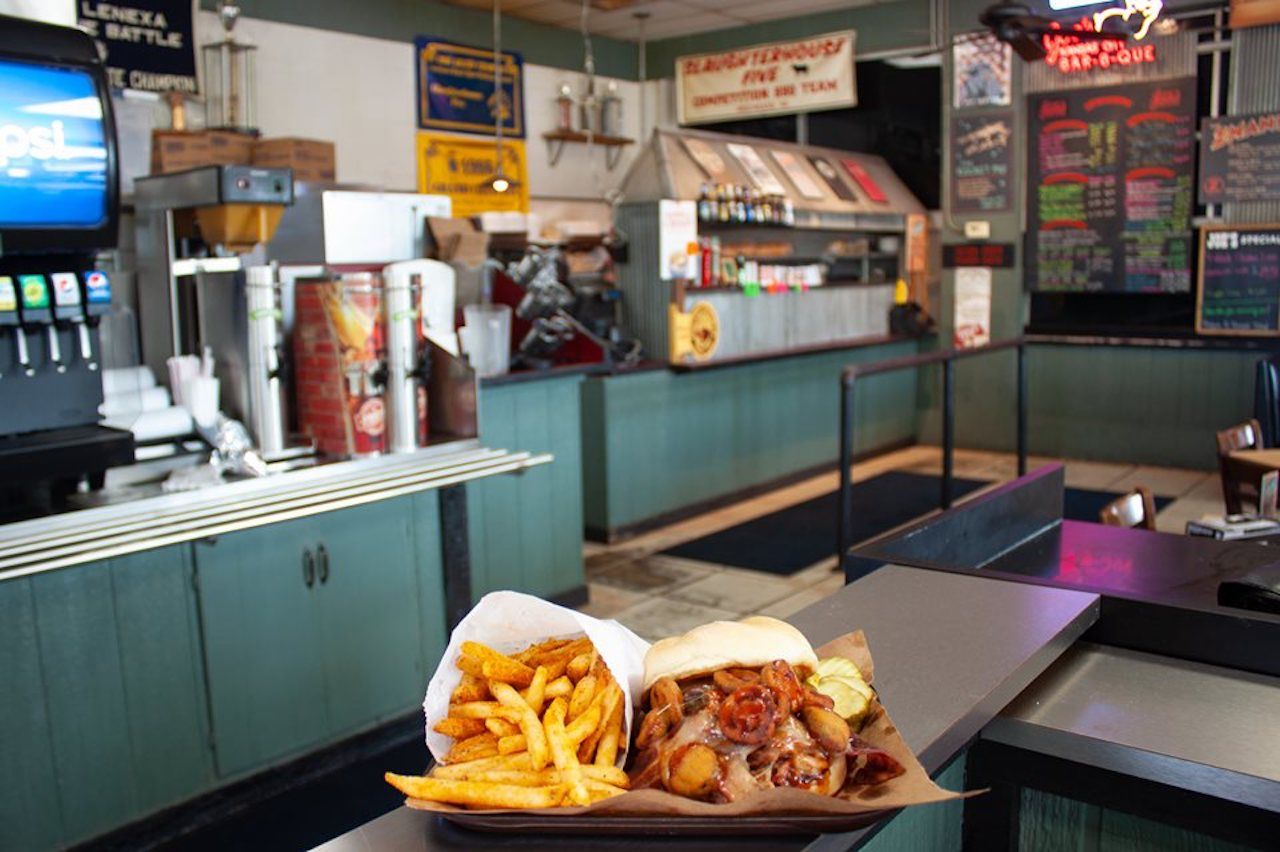 “In terms of the more current places that you can’t miss, Joe’s is number one,” says Detwiler.

Husband and wife team Jeff and Joy Stehney have run this barbecue joint since 1997, but they first entered the barbecue community through the competition circuit. These days, Joe’s is consistently ranked as the best barbecue restaurant in Kansas City. There are now three locations of Joe’s Kansas City Bar-B-Que throughout Kansas, but the original is located inside a gas station. 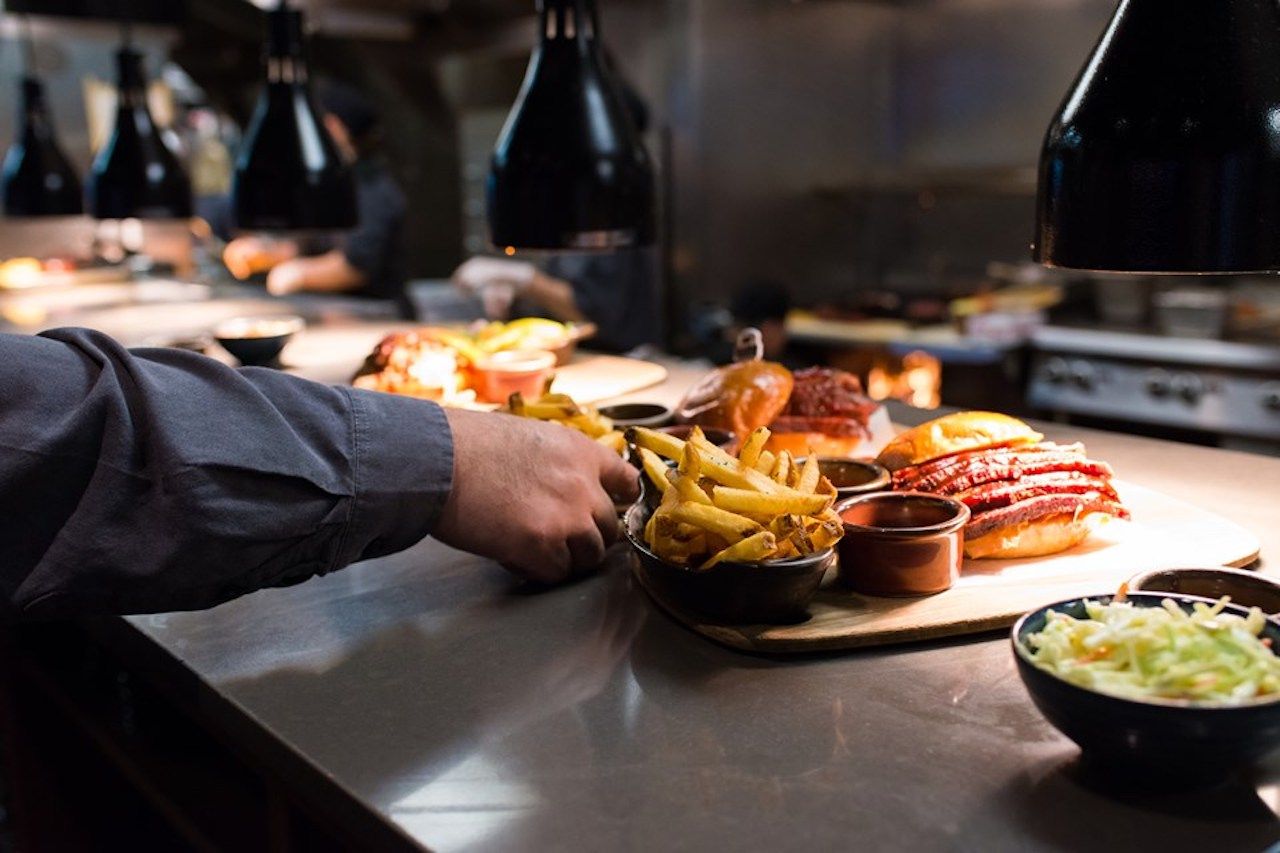 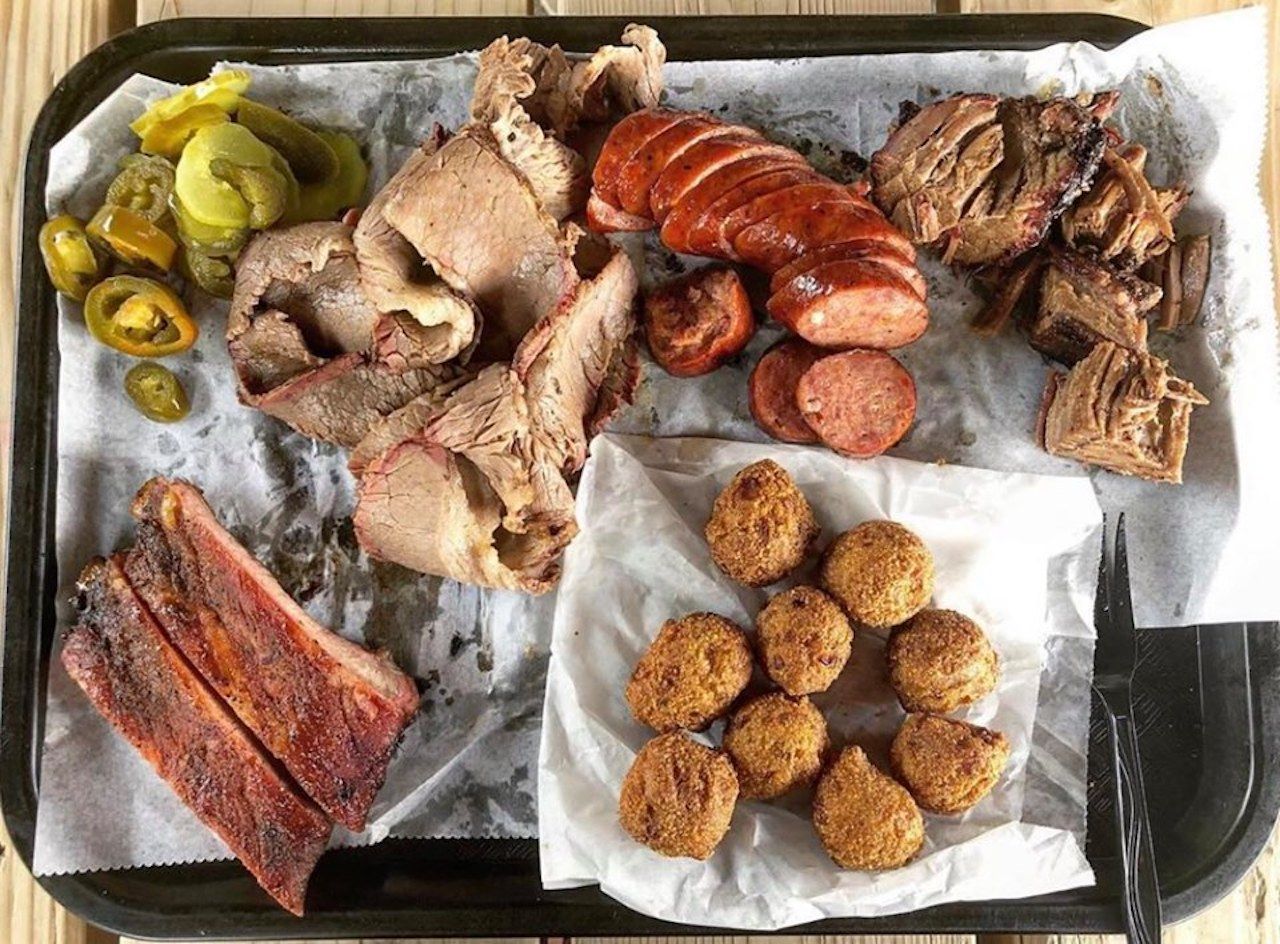 Brothers Mike and Joe Pearce, two more veterans of the barbecue competition circuit, run Slaps BBQ. The restaurant is so popular that it sells out of meat everyday, but the brothers still find time to compete in at least 25 barbecue competitions every year.