New York City has long been known for its vibrant black culture, and that extends to a thriving food scene. There is an abundance of black-owned restaurants, cafes, and bars, and due to the richness of the black diaspora in New York, there is not a singular type of cuisine found here. Black foodies can indulge in everything from soul food to Caribbean flavors. With that said, while there are a lot of black-owned restaurants in New York City, there are a few that often come highly recommended by native New Yorkers and travelers alike. Whether you’re craving seafood, pizza, or decadent vegan food, you can find it at these six amazing black-owned restaurants. 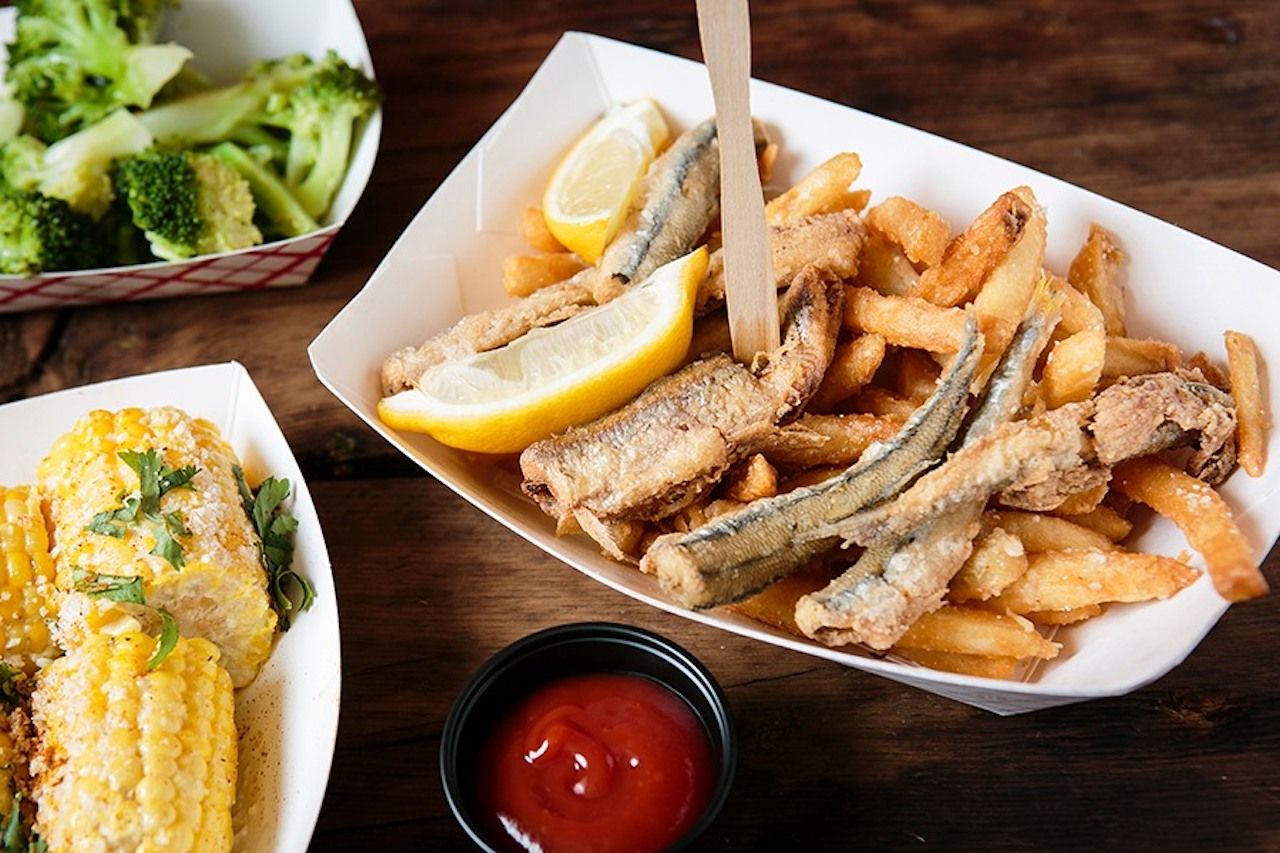 As a Baltimore native, I’ve been cracking crabs and peeling shrimp since I was a kid. This has made me very particular about where I indulge in seafood outside of Maryland. Lolo’s Seafood Shack in Harlem has some of the best seafood-based dishes on the East Coast. Locals and travelers love this Caribbean and Cape Coast mash-up of a restaurant. The bright yellow shack is hard to miss and once you step inside you’ll be met with an ambiance of island life.

Ask anyone who frequents Lolo’s often and they’ll tell you to order the classic jerk chicken and rice. For seafood lovers, don’t leave without trying a steam pot. It’s served in a steam-inflated bag, with a mix of shellfish such as crab legs, crawfish, spiced shrimp with corn and sweet potato. The best part about Lolo’s steam pots is choosing which of its signature sauces to have your shellfish glazed in. Its legendary sauces include garlic butter with Old Bay, ginger butter with scallions, and a coconut curry sauce. If you’re feeling adventurous, reach for the crispy shark and bake sandwich topped with pickled cabbage and Habanero hot sauce. 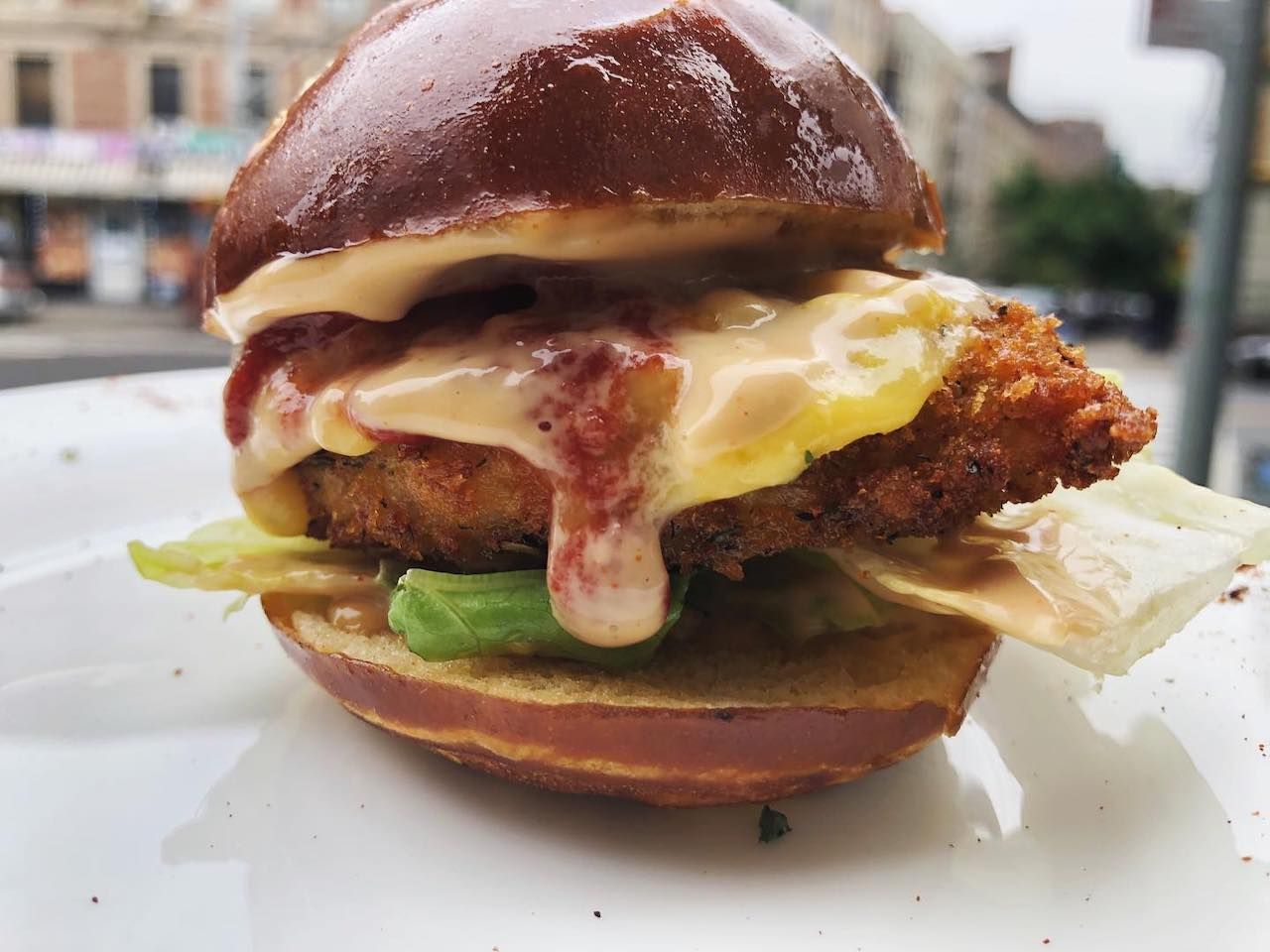 Seasoned Vegan is Harlem’s answer to any bland vegan eats you’ve ever had. Owned and operated by a mother-son duo, Brenda and Aaron Beener, Seasoned Vegan is the first full-service vegan restaurant in the neighborhood.

Soul food is abundant here but that doesn’t exclusively mean the style of food typically served in the southern US. At Seasoned Vegan, dishes range from Italian to Caribbean, all cooked and infused with love. The most popular dishes include the lemon-crusted chicken nuggets, stuffed avocado with almond meat and cashew cheese, and the shrimp po’boy. If you’re craving some traditional comfort food, fill up with the mac and cheese or collard greens. Loyal diners have given Seasoned Vegan a large following on social media. 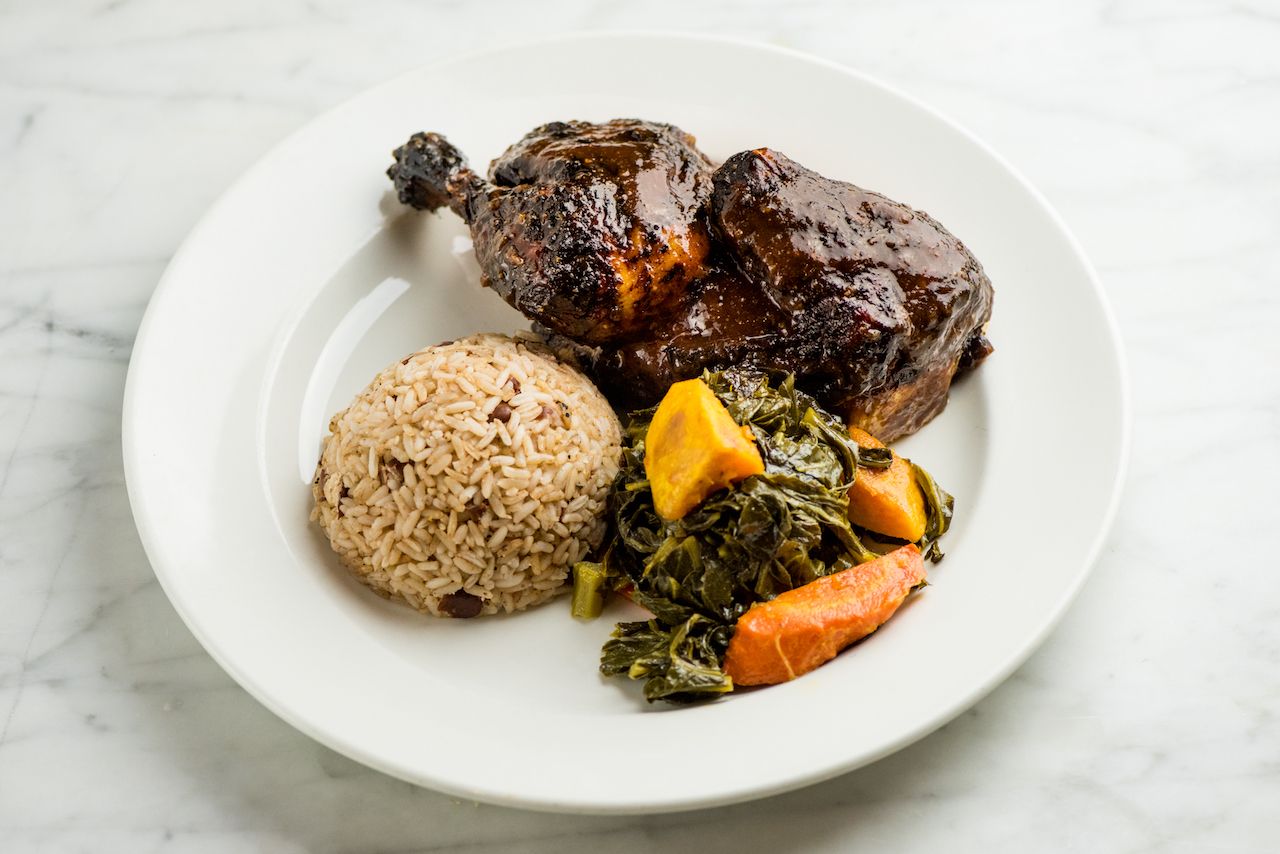 If you’re looking for black-owned bites in Brooklyn, don’t miss the modern Caribbean dishes at Negril BK. The neon pink “One Love” sign on the wall and the live music brings together authentic island ambiance. From the cocktails to the plates, every part of this place is tinged with the spirit of the Caribbean.

For happy hour drinks, try the Buffalo Soldier, a bourbon-based cocktail with lemon and cinnamon. If you’re a rum lover, order the Walking Trophy, a Wray & Nephew rum cocktail infused with turmeric, mango, and pineapple. And for a classic taste of the island, there’s a traditional rum punch cocktail on the menu.

If you stick around after happy hour — which you definitely should — there’s a variety of food to choose from. Some standout dinner entrees are the crispy stuffed snapper and the braised oxtail served with rice and peas. If brunch is your thing, try the fried chicken and hibiscus waffle. And for a traditional taste of Negril, order the Jamaican breakfast, which consists of ackee and saltfish, green banana, festival, plantains, callaloo, and freshly baked cocobread. 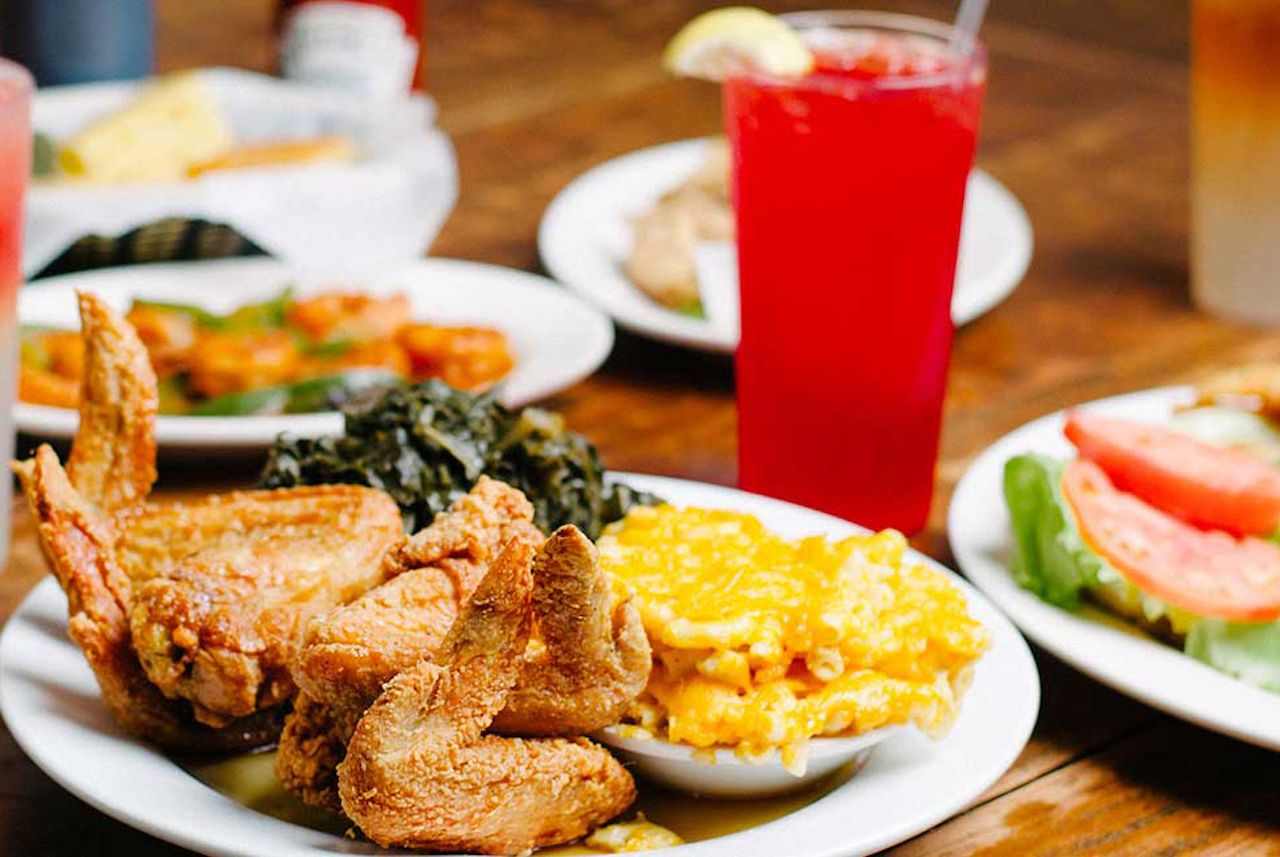 Another Harlem institution that is known nationwide for its chicken and waffles, Amy Ruth’s is famous for a reason. This family-run restaurant is a thriving tribute to the legacy of the restaurant’s namesake, Amy Ruth Moore Bass. She was known as a loving grandmother, farmer, gardener, and a world-class cook. Her daughters Inez and Esther spent their summers in the belly of the deep South picking vegetables from their grandmother’s garden and shucking Alabama sweet corn. The sisters have drawn from these memories and made sure the restaurant is brimming with their mother’s essence at every turn.

When you pull up a seat here be sure to come hungry. Meals like the Natasha Anderson, a waffle served with a pork chop, or the Rev. Al Sharpton, a waffle with smothered chicken, are particularly hearty. If you’re craving something both savory and sweet, order the Honorable Bill Perkins, pan-seared salmon cooked in a peach-butter sauce. Classic Southern sides like black-eyed peas and cheesy grits complement the entrees well. Be sure to check the website before arriving for Amy Ruth’s rotating daily specials. 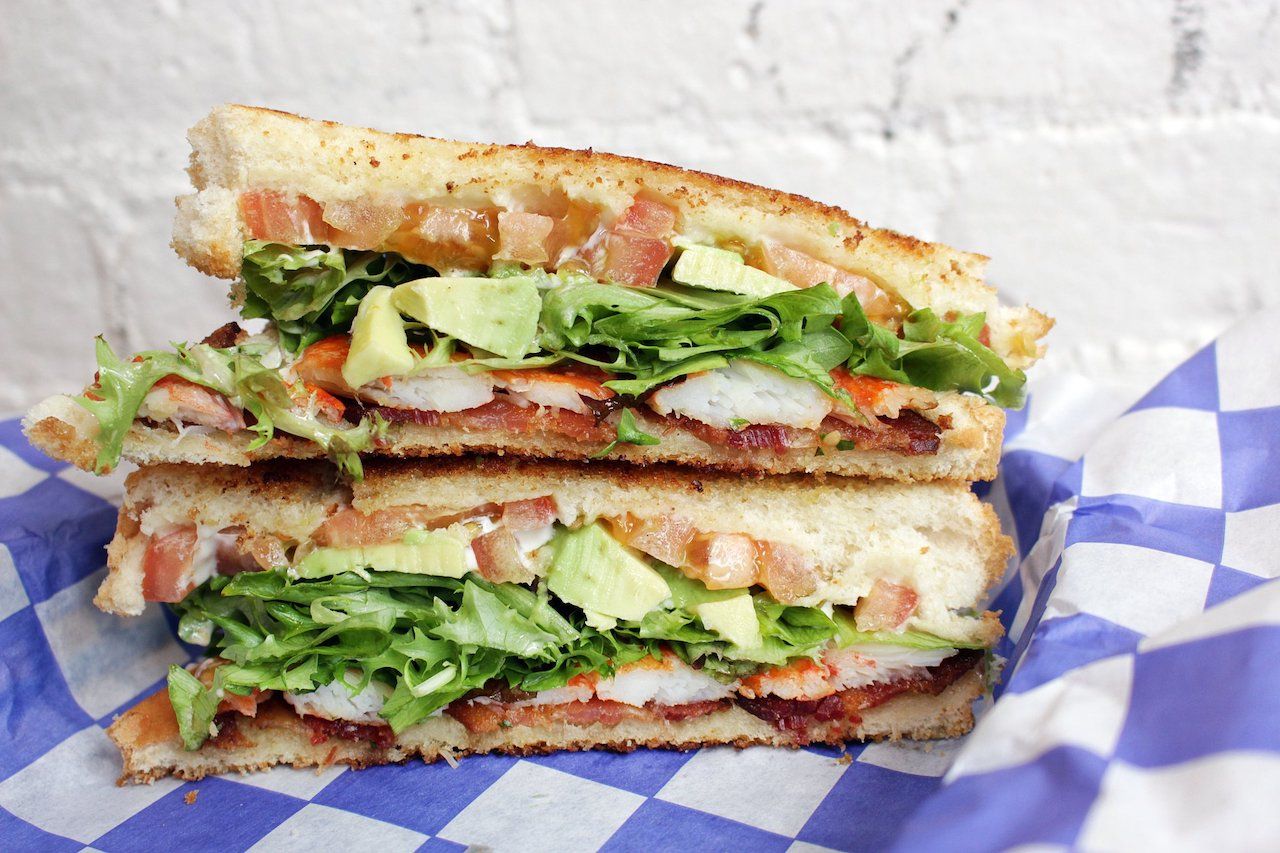 Fifi Bell and Gwen Woods are two crab-loving friends whose idea to open a crab restaurant was sparked one night at a dinner party. A year later, Bell and Woods joined forces to open The Crabby Shack in Crown Heights. Since then, they’ve unveiled a second location, The Crabby Sandwich Shack in Clinton Hill, that serves sandwiches of all kinds.

Their original location is loved by diners for its crab-centered dishes with a twist. For a classic seafood dinner, try the Crab Platter, which comes with a choice of two sides including potatoes, corn, broccoli, or coleslaw. If you’re seafood obsessed, order the Clobster Roll, which is half lobster and half crab served on a buttered roll. Cheese lovers should try the Crab Grilled Cheese or the Crab Mac and Cheese — made with a blend of Gruyère, cheddar, and fontina. Vegans can enjoy crab cakes cooked with chickpeas, zucchini, and a nori flakes base.

Some standout bites of the Clinton Hill location include the Crab BLT with avocado and the Buttermilk Fried Chicken Sandwich. Have the Old Bay Fries as a side, and when it’s time for dessert, top things off with a bite of banana pudding or peach cobbler. 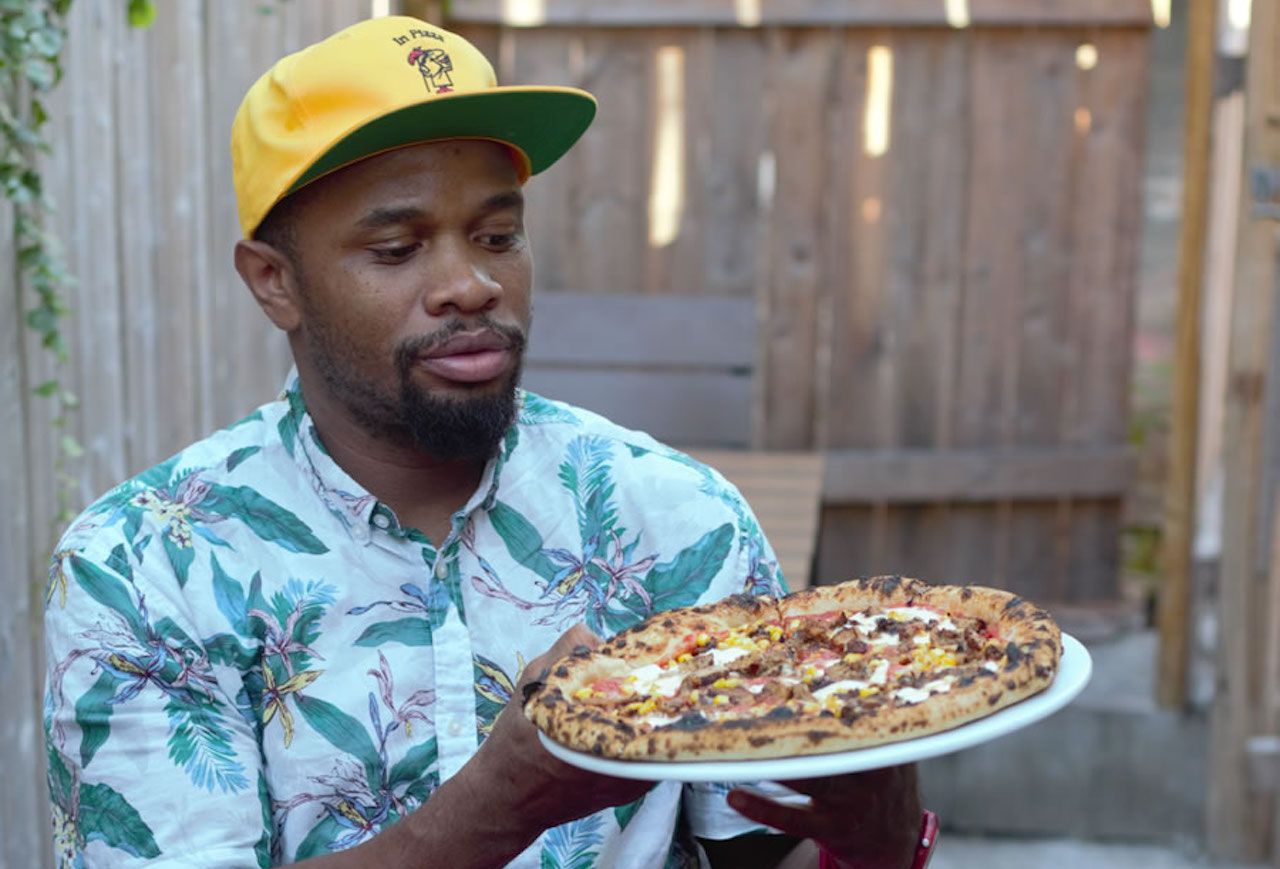 ZuriLee is the New York pizza joint you didn’t know you needed. The Brooklyn pizzeria is not a place to go for $1 slices. Instead, it infuses various Caribbean flavors into each pie. The pizzas are made in a woodfire oven for a crispy, thin crust and are topped with ingredients like jerk chicken and oxtail. The restaurant also serves roasted veggies, burgers, and an appetizing weekend brunch.

Da Jerk Chicken Pizza, a classic at ZuriLee, is made with a mozzarella base and topped with roasted corn. Or for an unexpected twist, try the Funky Flatbush topped with kimchi and provolone or the What The Pie, which is made with three kinds of cheese, pepperoni, Angus beef, lamb, and mushrooms with a spinach pesto base. If you’re in the neighborhood during brunch hours, ZuriLee serves up dishes like coconut smothered fish with Parmesan grits. Adventurous brunchers should try the jerk salmon with a fresh fruit compote-topped waffle.