The best hiking beers are refreshing, flavorful, and worth carrying in your pack during your journey until it’s finally time to crack open a cold one. It doesn’t matter what type of hiking you prefer to get into — whether it be an urban hike with metropolitan views or a hike along one of the country’s stunning scenic trails — a hiking beer feels like the cherry on top when enjoying the views you trekked miles to see. Few people know this as well as the brewers themselves.

We got in touch with 11 brewers from Vermont to California and everywhere in between for advice on the best hiking beers to pack before heading out. Each brewer gave two options: One beer from their own brewery, and one beer that another brewery makes. Some picked easy drinking, low-alcohol lagers while others opted for high hop IPAs. All are worthy of consideration the next time you’re browsing the grocery aisles looking for a hiking beer to add to your snack and refreshment options.

These are the best hiking beers, according to brewers.

From 21st amendment: “My favorite 21st Amendment hiking beer is hands down and without a doubt El Sully Mexican-style lager with it’s lighter body, crisp clean flavor and light straw color. It won’t fill you up and the alcohol is at a respectable 4.8% so it won’t knock you on your ass. My secret is to store a couple of limes in my backpack.”

From elsewhere: “Relapse IPA, a cold IPA from Wayfinder Brewing in Portland, Oregon is a wonderful beer for hiking. It’s crisp, clean, with great bitterness and hop aroma. I also won’t stop talking about this new sub-style, Cold IPA. What it isn’t is an India Pale Lager, which are flabby and lack a distinct crisp note. What it is, is a beer brewed with lager yeast, with flaked rice or corn giving this beer a snappier flavor with lower maltiness and to make it even better, it’s hopped like a west coast IPA. Perfect for hiking without filling you up and to top it off a solid IPA.”

From Indeed Brewing: “For me being outside is about enhancing the senses. The juicy tropical fruit aroma of our Flavorwave IPA is a great collaborator with woodsy wildflowers and blooming pollinators.”

From elsewhere: “I’d be remiss to not name Coors here. Possibly the original American hiking beer? It’s tough to beat a crisp Banquet Beer after getting on top of one of Colorado’s peaks, but be mindful of that altitude!”

From Fieldwork Brewing: “Hills & Valleys, our American Pilsner. ‘Refreshing’ will probably be a common answer to the question of why a beer is perfect for hiking, but it best describes the feeling. It reminds me of hiking hut to hut in the Alps where we would stop for lunch everyday at these beautiful mountain refuges and have an omelette or bread and cheese and a cold European lager. A great break before the second half of the daily trek.”

From elsewhere: “El Sully from 21st Amendment. Just a tremendous Mexican-style lager. One of the best beers brewed in America. This beer is in my fridge year round for the great hiking we have here in Northern California.” 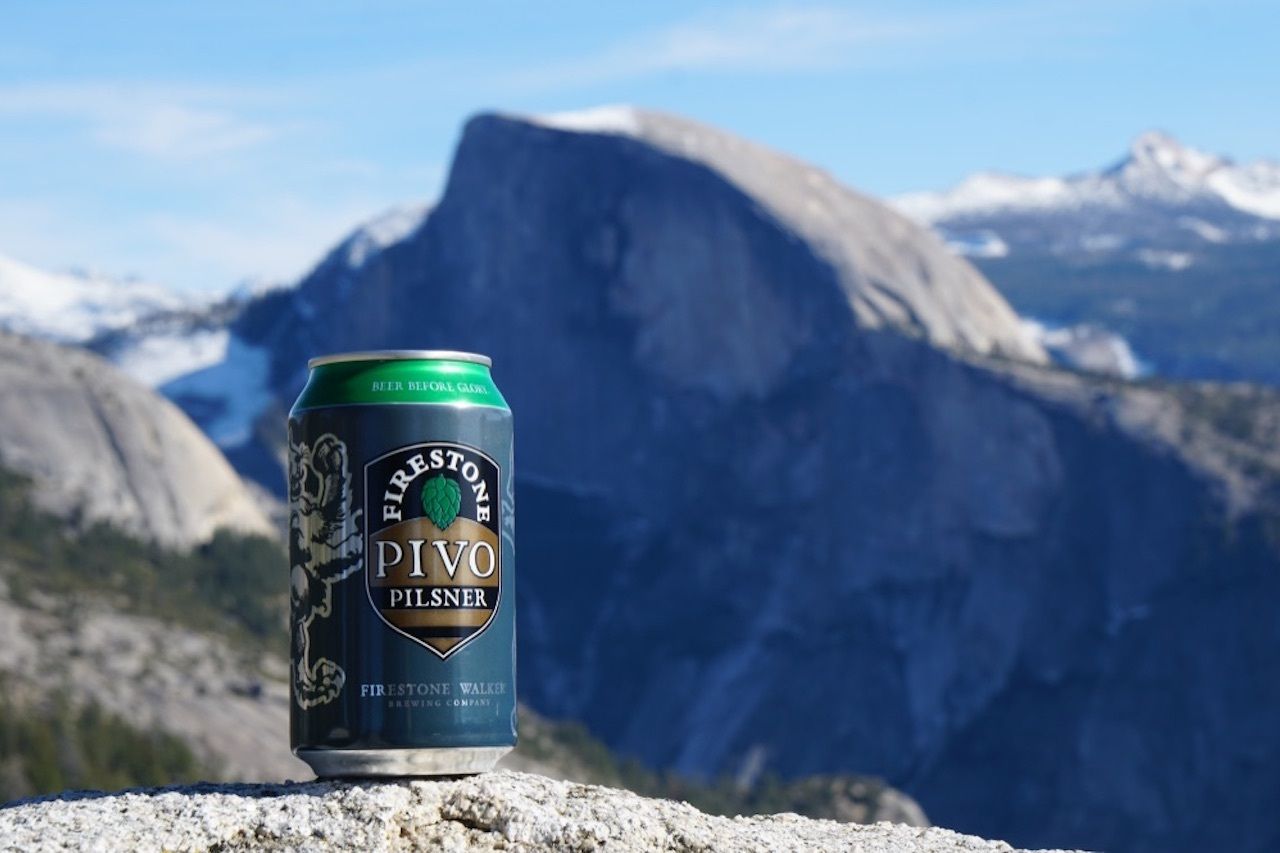 From Firestone Walker: “FlyJack hazy IPA is a great hiking beer. It ticks all the boxes – it comes in a can, it’s low ABV, and is very refreshing. That said, I would actually pick Pivo Pils as my go-to hiking beer, there is something about a pilsner beer at the top of the mountain that just can’t be beat. Dropping a couple cans of Pils into the river to chill down as you are soaking your feet and then sharing some sips with your partner before you head back down is about the best thing I can think of.”

From elsewhere: “Last year when I was living in Europe I had the pleasure of hiking in the Alps with a couple of my good friends including Eric Toft who is the Brewmaster at Private Landbrauerei Schönram in Southern Bavaria and who makes one of the best Helles beers on planet earth. It was a steep and challenging climb that day, which was rewarded with a surprise bottle of Schönram Hell at the peak. That beer, in that time and place, was the most delicious beer I have ever drank – period. It’s a beautiful memory I will never forget.”

From Golden Road: “Whenever I’m getting ready to hit the trails and soak up some California sun, my go-to beer is Golden Road’s Hazy Pup. It’s light and crisp with a ton of fresh hop character and only 95 calories. After a long day of hiking, it’s restorative without being too heavy.”

From elsewhere: “When I’m hiking outside of my immediate area or even out of state, my go-to is and always will be Sierra Nevada Pale Ale. Nothing transports me back to my earliest days of drinking craft beer outdoors in the Bay Area than a super fresh, Cascade hop-forward Sierra Nevada Pale. Still a world-class beer!”

From Redhook: “My wife and I go backpacking a lot in the summer months up in the Washington mountains. I always bring three or four crowler cans of Redhook Storm Surge Hazy IPA and my friends make fun of how heavy my pack is because of the gallon of beer I’m carrying. But it’s always worth it when we set up camp, and I don’t have to share it.”

From elsewhere: “We also take a ‘victory’ beer on day hikes for when we reach the summit of a mountain or alpine lake or whatever we are hiking to. I always try to make it a Pilsner or IPA – Pilsner Urquell in cans is a favorite!”

Stone IPA and Societe The Pupil 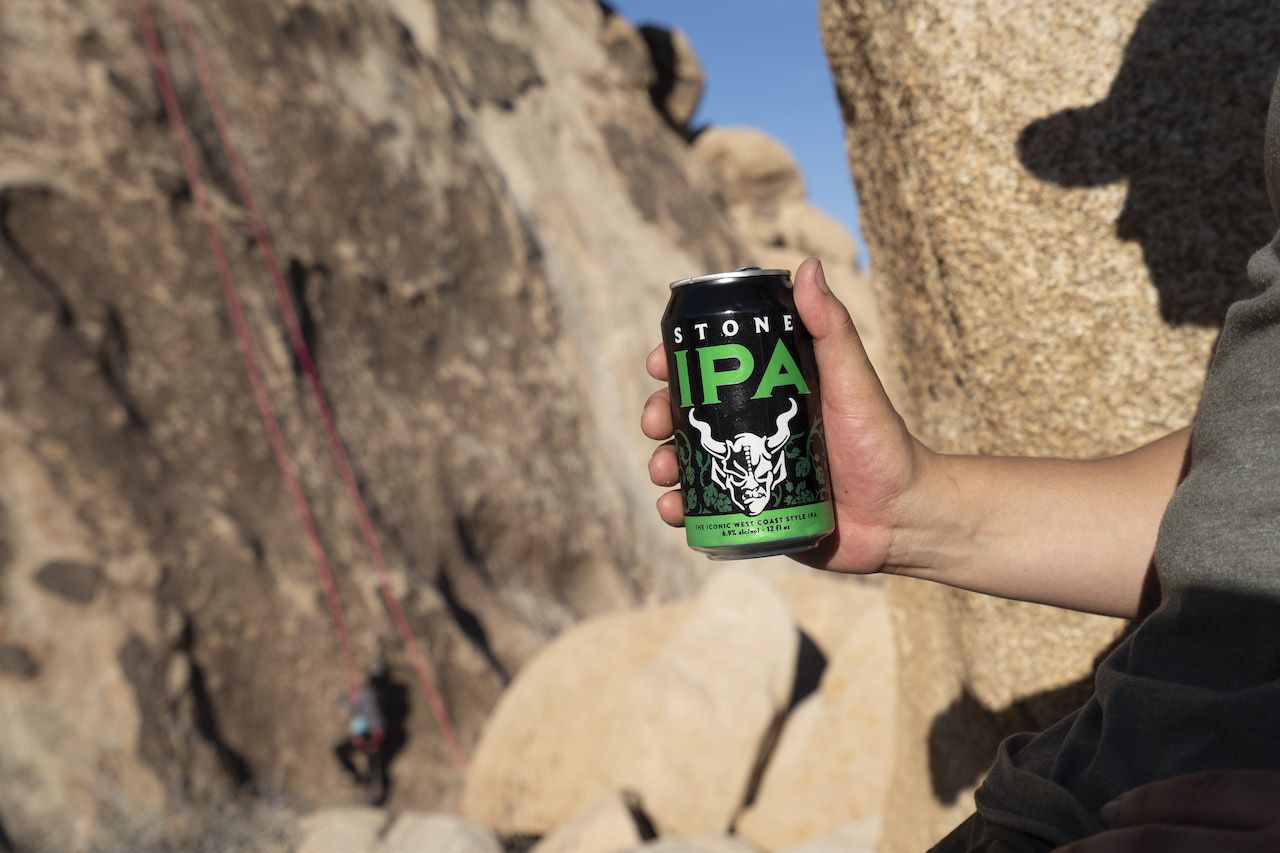 From Stone Brewing: “Stone IPA in the forest. Dank, resinous, and piney itself just like the forest with crisp, fresh air. Stone Buenaveza Salt & Lime Lager is perfect for all other hikes, especially if you are by any body of water. Super refreshing to help you recover from many miles logged with nice salinity to keep you wanting more.”

From elsewhere: “It’s tough to narrow it down but lately Societe The Pupil has been perfect for my weekend hikes: lots of tropical flavors and aromas and very crisp and clean. Some folks may want lower ABV for hiking but I feel you earn it with miles so 7.5 percent is just fine.”

From Sierra Nevada: “From our portfolio, hands down Pale Ale is the best post-hiking beer around. It is the perfect combo of piney hops with a crisp finish that hits the ‘I-deserve-a-reward-for-being-an-awesome-hiker’ spot.”

From elsewhere: “Though I could drink SNBC beers every day and not want for anything else (and often do), I would say that Highland Brewing’s AVL IPA is also up my alley when it comes to beers to pair with a great hike. Juicy and fruity, but also refreshing after a day on the trail.”

From Broken Compass: “My favorite hiking beer of ours is our Ginger Pale ale. It uses both fresh ginger for great ginger flavor and aroma as well as a ginger tea to give it a nice little bit of spiciness. Super refreshing on the trail or on the river.”

From elsewhere: “My favorite hiking beer (now that you can get it in cans!) from another brewery is hands down Bierstadt Lagerhaus Slow Pour Pils. This is everything a Pils should be. Voted top brewery in Colorado by peers two years in a row with this beer voted best beer by peers in 2020. World class.”

From Roadhouse Brewing: “Highwayman is without a doubt my favorite beer for hiking. The 16-ounce can leaves me perfectly content after a long day on the trail or while sitting on top of a high peak or at a pristine mountain lake. This beer is crisp, refreshing and quenching and at 4 percent alcohol by volume, I don’t feel full or inebriated after one can — dare I even say hydrated and replenished! And don’t forget, if you pack it in, pack it out!

From elsewhere: “Odell Brewing Company’s Sippin’ Pretty is one of my favorite beers to pick up before I hit the trail. The balanced tartness of the beer and sweetness from the fruit makes for a delectable treat while on the trail — especially when retreating from the hot summer sun under a tree or in a cool river or lake.”

From Halyard Brewing: “Well, it depends on what type of hike. If it’s me, my partner, and the kids on a leisurely family stroll through the Vermont woods or to a gentle look-out, I like to stuff a few Nicole’s Extra Ginger Beers into the baby carrier backpack (along with plenty of salty snacks, cheese, water bottles, apples, gummy bears, toilet paper, bugspray, sunscreen) to share and enjoy along the way. If I am going to tackle a mountain or spend all day in the woods, I love to bring a can of our Mountain Aid: Black Currant Ginger Beer and enjoy at the summit. It is tart, low abv (4.5 percent — still have to hike down!), and super refreshing.

From elsewhere: “Zero Gravity Green State Lager. This is a really great and clean Vermont lager. Plus, I like to tell myself that lagers are a great source of trail-hydration. When I lived in Colorado, I often grab Oskar Blues’ Mama’s Little Yella Pils for the same reason.”

ClimbingWhat To Eat Before Going Hiking or Climbing, According To Expert Guides
Tagged
Beer Hiking
What did you think of this story?
Meh
Good
Awesome