Strands of gruyere dripping from a fondue spoon. A buttery grilled cheese sandwich with cheese that stretches from piece to piece as it’s pulled apart. Melted cheese is a performance of the delicious, tempting and beguiling. It doesn’t just taste like heaven, it has the looks to match. No one knows this better than Polina Chesnakova, the award-winning writer behind the Russian-Georgian food blog Chesnok. To her, warm, melted cheese is the most iconic and beloved member of the comfort food family. The appeal, she thinks, lies in the fact that it is inherently dramatic.

“I think you’re starting to set the stage whenever you start melting the cheese,” Chesnalova muses. “I kind of love to watch the cheese start to melt and blister. It not only excites you, but everyone around you. You bring the pot of fondue to the table or you take out your tray of sizzling French onion soups, and there’s a moment before you dig in where everyone is watching the hot cheese. Everyone is hypnotized.”

Chesnakova loves cheese so much that she wrote an entire cookbook that’ll be published on September 1 this year, Hot Cheese, that exalts the versatility of this near-universally beloved ingredient. Cheese appears across cultures, from North and Central America to Eastern Europe, to the Middle East, and to South Asia. Children all over this planet grew up eating cheese at snack time, at sleepovers, and birthday parties. To know it is to love it forever.

“People always love hot cheese,” Chesnakova says. “It’s something that almost everyone grew up with, and it’s found in almost every culture that eats dairy. So it’s something that is familiar to everyone. And I think that familiarity kind of enshrouds it with the feeling of comfort and coziness.”

Here, Chesnakova elaborates on the role of cheese in Georgian cuisine, and why nostalgia is a key ingredient in the best hot cheese dishes. 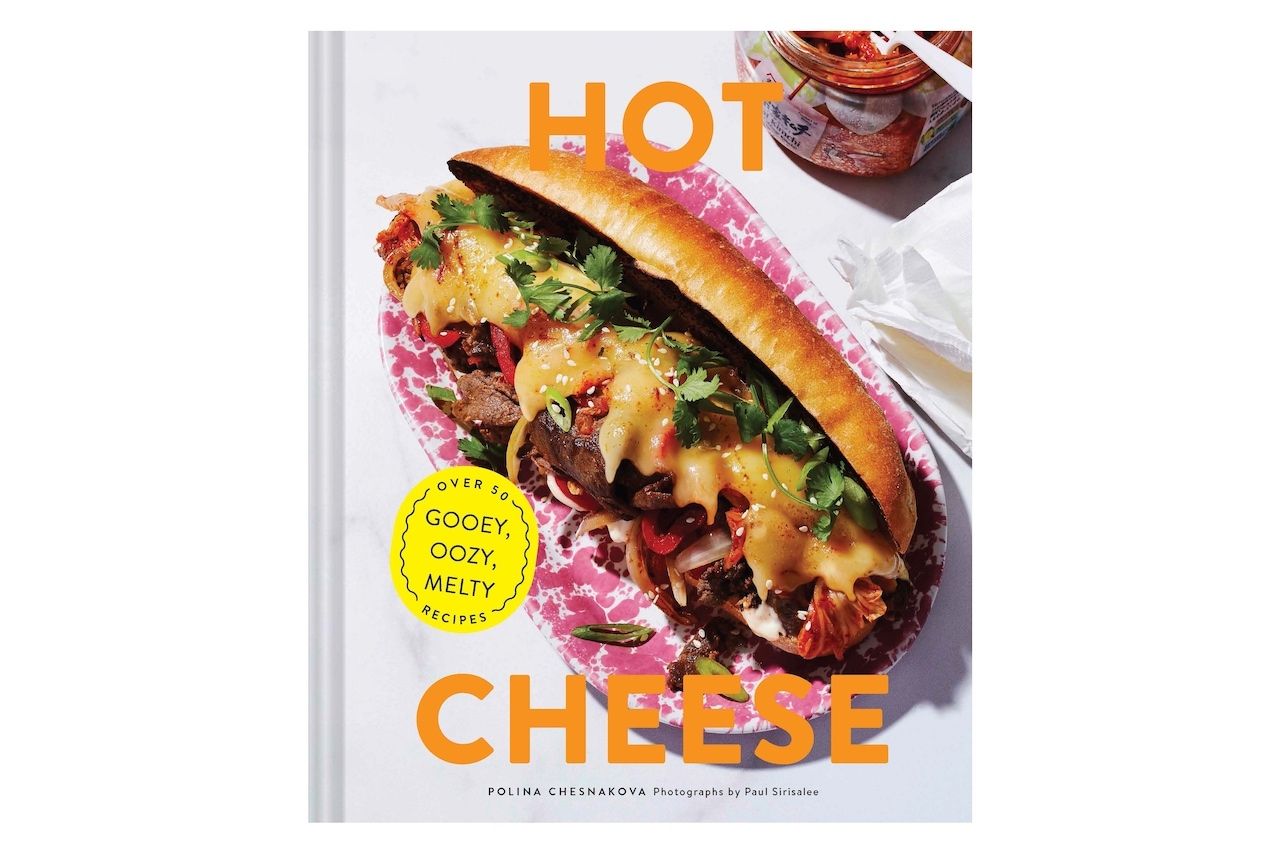 Chesnakova and her family immigrated to America from Georgia, a country with a rich diary culture. Cheese is a constant on the Georgian dinner table. Chesnakova recalls eating khachapuri — boat-shaped bread filled with melted cheese and topped with raw egg — at nearly every family gathering and holiday. She included her favorite recipe for Adjaruli khachapuri, from the Adjara region of Georgia, in her cookbook. Traditionally, it’s made with Georgian sulguni cheese, though her version is filled with a combination of mozzarella, ricotta, and feta.

Khachapuri might be the most iconic Georgian cheese dish, but dairy eating traditions in the country include complex and wide ranging flavors and dishes. In Georgia, meals are theater, an elaborate dance of family-style dishes that emphasize sharing and pleasure. These feasts are known as supra.

“In Georgian culture they don’t really have different courses,” explains Chesnakova. “The table is filled with all sorts of dishes, to the point where you can’t even really see the table. As part of that initial spread, you’ll have a platter of cheese that you can snack on with puri bread, [as well as] the herbs, the tomatoes, cucumbers. And then the hot dishes come out.”

There are three types of cheese that appear at the Georgian dinner table: sulguni, a “semi soft, fresh cheese that has the texture of mozzarella, but the freshness briney-ness of feta,”; guda, a funky cheese produced in the Georgian mountains; and karkhunli, which Chesnakova describes as “really briney and really pungent.”

The hot dishes that come out after the small plates often feature cheese, too. Polenta is popular throughout Georgia, where sulguni is often shaved over the top of the dish to create a gooey topping for the creamy cornmeal. There’s also cheese wrapped in mint leaves, which is aromatic when you cut into it.

The best dishes to eat with melted cheese 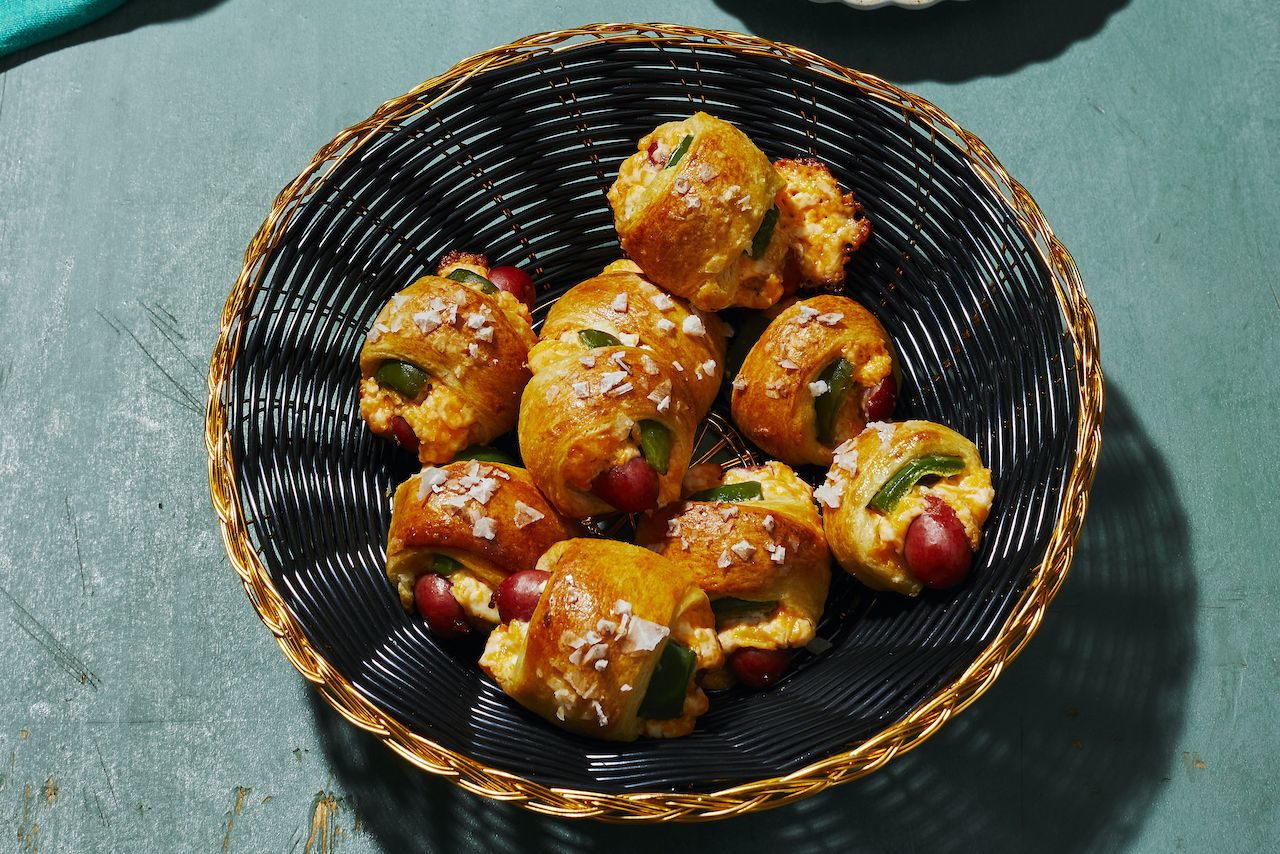 According to Chesnakova, for a hot cheese dish to be a hit, it should incorporate two essential elements. The first is that it should be shareable.

“Whether it’s a fondue or cheese dip, or baked brie, it kind of attracts the crowd,” she says. “Hot cheese is so alluring that everyone is drawn to the table to eat.”

Many of her favorite hot cheese dishes right now can be enjoyed with a group (and in the era of COVID-19 that means whoever has been initiated into your quarantine bubble in the past few months). Chesnakova says she’s been eating pizza at least once a week — the pizza recipes in Hot Cheese include ingredients like soppressata, hot honey, fontina, and radicchio, but perhaps the dish she’s come to love the most is one she thinks is often overlooked: the quesadilla.

“You have jalapeno and red onions and you use the Oaxaca cheese which just melts really well and it has a bit of cotillo which is kind of like a Mexican style Parmesan,” Chesnakova says. “It’s really salty and nutty. It’s filled with minced chives and leeks and red onion and green onion. That’s so many different types of onions but their pungency is able to cut through the richness of the cheese. Then you get the fried tortilla, and you dip it into the sour cream. I could probably eat that for dinner every night.”

The second element for a hit hot cheese dish is taste. The best hot cheese dishes often trigger nostalgia. In fact, most of the recipes that Chesnakova included in Hot Cheese were inspired by dishes she grew up eating. Tomato soup and grilled cheese, for instance, elicits a “vivid childhood memory”; her elevated version in the cookbook includes fennel and blue cheese croutons. She also includes recipes for chicken cordon bleu, which she grew up eating, and for her fiance’s mother’s hatch chili rice casserole — recipes that she says “really bring back a lot of good memories.”

That might be the real power of hot cheese: Yes, it is deliciously satisfying, but each bite can also thrust you into the past to relive happier times surrounded by family, laughing or playing with friends in the summer, or snuggled up at home in the winter. Each strand of salty, creamy melted cheese contains a love spell that brings loved ones closer — perhaps now more than ever we need a reminder of how the right meal can restore happiness, even if just for a moment.

“Everyone comes together not just to eat hot cheese, but to help cook, too,” Chesnakova says. “Hot cheese invites everyone into the kitchen, and that’s always my aim.”