Portland is weird, sure. Seemingly every brewery in town seems to be competing to see who can make a more death-defying IPA, and nobody would bat an eyelash if someone opened a store selling nothing but organic, non-GMO sponges. But beyond its quirkiness, Portland also has the best urban wilderness of any American city, where you can escape from downtown into a maze of Douglas Fir trees in a matter of minutes. Then, an hour later, find yourself kayaking to a secluded island beach.

Other cities have nature, sure, but nowhere is it as abundant and easy to access as it is in Portland. And with 12,591 acres of public parkland just within the city limits, finding where to hike, and for how long, can be a little overwhelming. But from beginners to people who want to hike from sunrise to sunset, the Rose City has something for everyone. 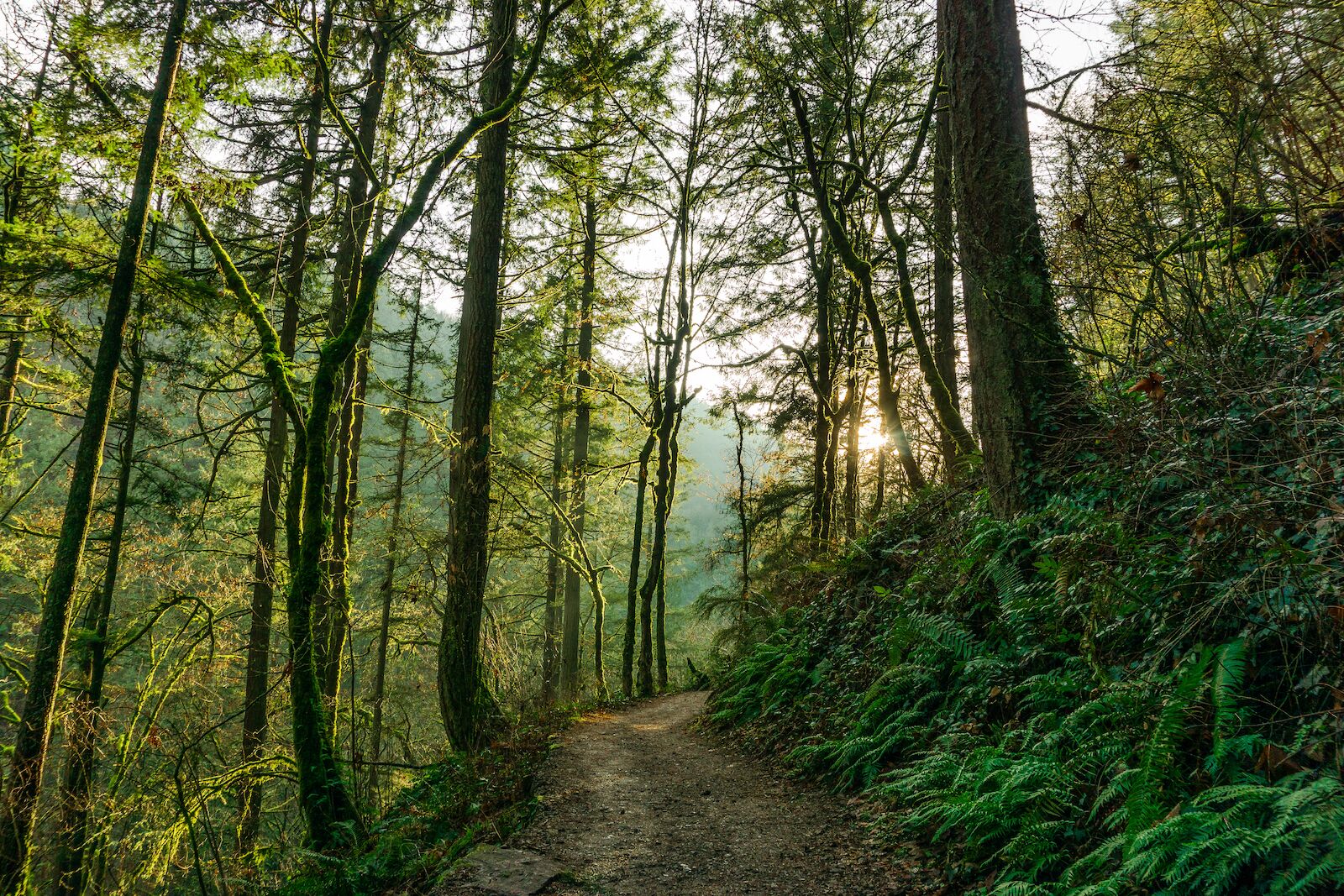 The crown jewel of Portland’s urban wilderness is Forest Park and its 5,200 acres of pure northwestern forest set completely inside the city. Seventy miles of trails run through the park, crossing over lava-formed streams, up lush hillsides, and deep into miles of Douglas Fir trees. You could spend an entire vacation just exploring what’s inside, but the signature experience is the Wildwood Trail. The 30.2 mile path covers the entire park from the Vietnam Veterans Memorial and Zoo to Newberry Road, and if you come in the summer an ambitious hiker can do it all in one day. If that sounds a little extreme, you can pick the trail up in plenty of places around the park to get a small taste.

You can also take a trail to the Pittock Mansion, a 1914 French renaissance chateau built for newspaper tycoon Henry Pittock. Even if you don’t care to tour the home, the views from the immaculate front gardens are a welcomed place to take a load off after a long hike. While you can walk the park yourself any time from 5 AM to 10 PM, taking a tour with Around Portland Tours will educate you about the history of the park. And you’ll learn jaw-dropping stories about the people who’ve lived on the possibly-cursed land over the centuries. 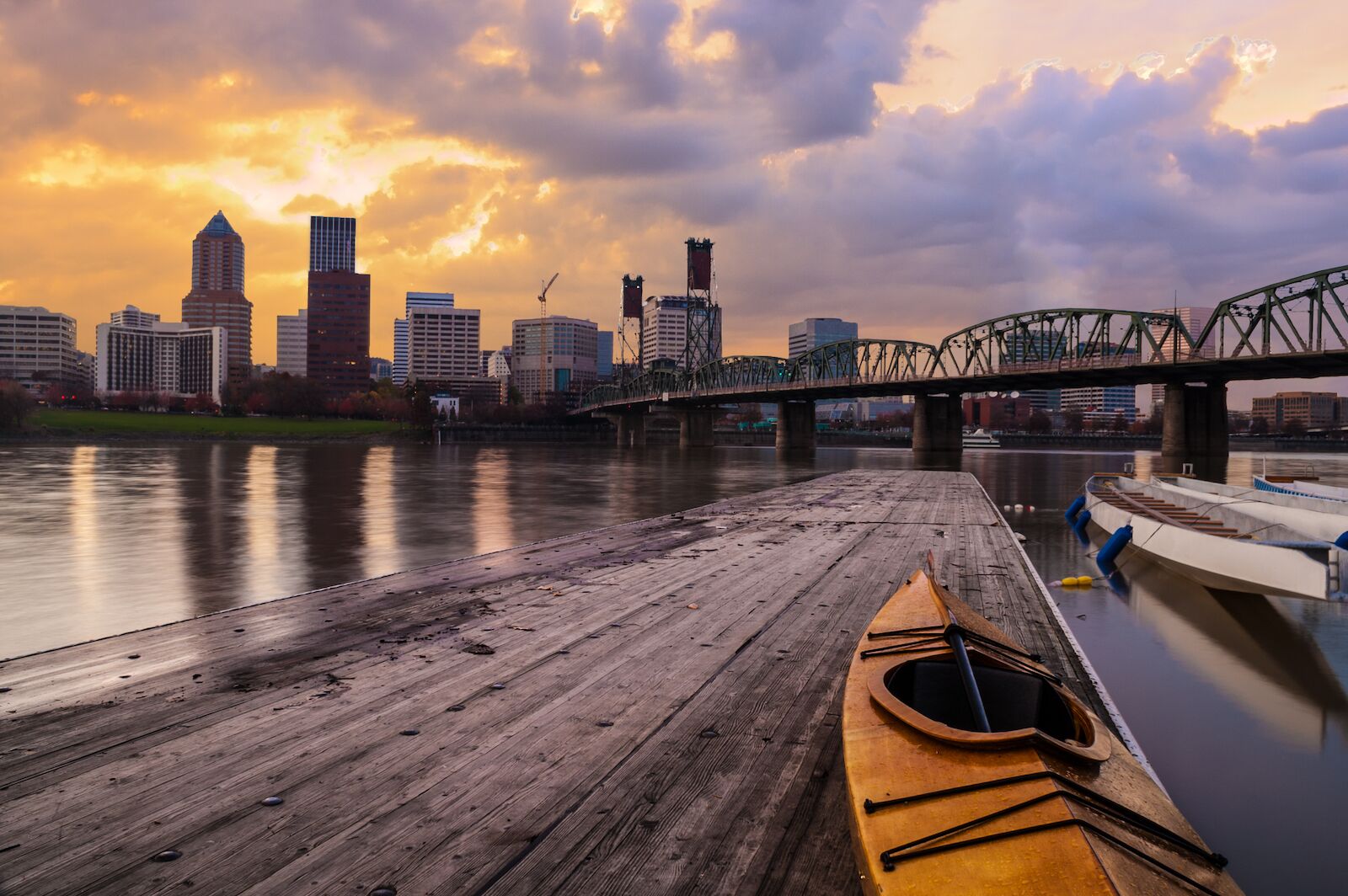 The shining blue waters of the Willamette seemingly beg to be explored as you see them from almost everywhere around the city. The most relaxing way is to paddle a kayak around Ross Island, a one time dredging port in the middle of the river. You’ll glide through green wilderness, past slow-moving boats, and out to the bridges leading to downtown. The whole loop can be done in a couple of hours, but packing a few beers and a picnic to enjoy on one of the island’s beaches is well worth the extra time.

You can rent kayaks from Portland Kayak Company, who has space at a private sailing club along the river from which to launch. The kayaks are heavy duty sea kayaks too, so even if the water is a little choppy you won’t get wet (unless you want to). 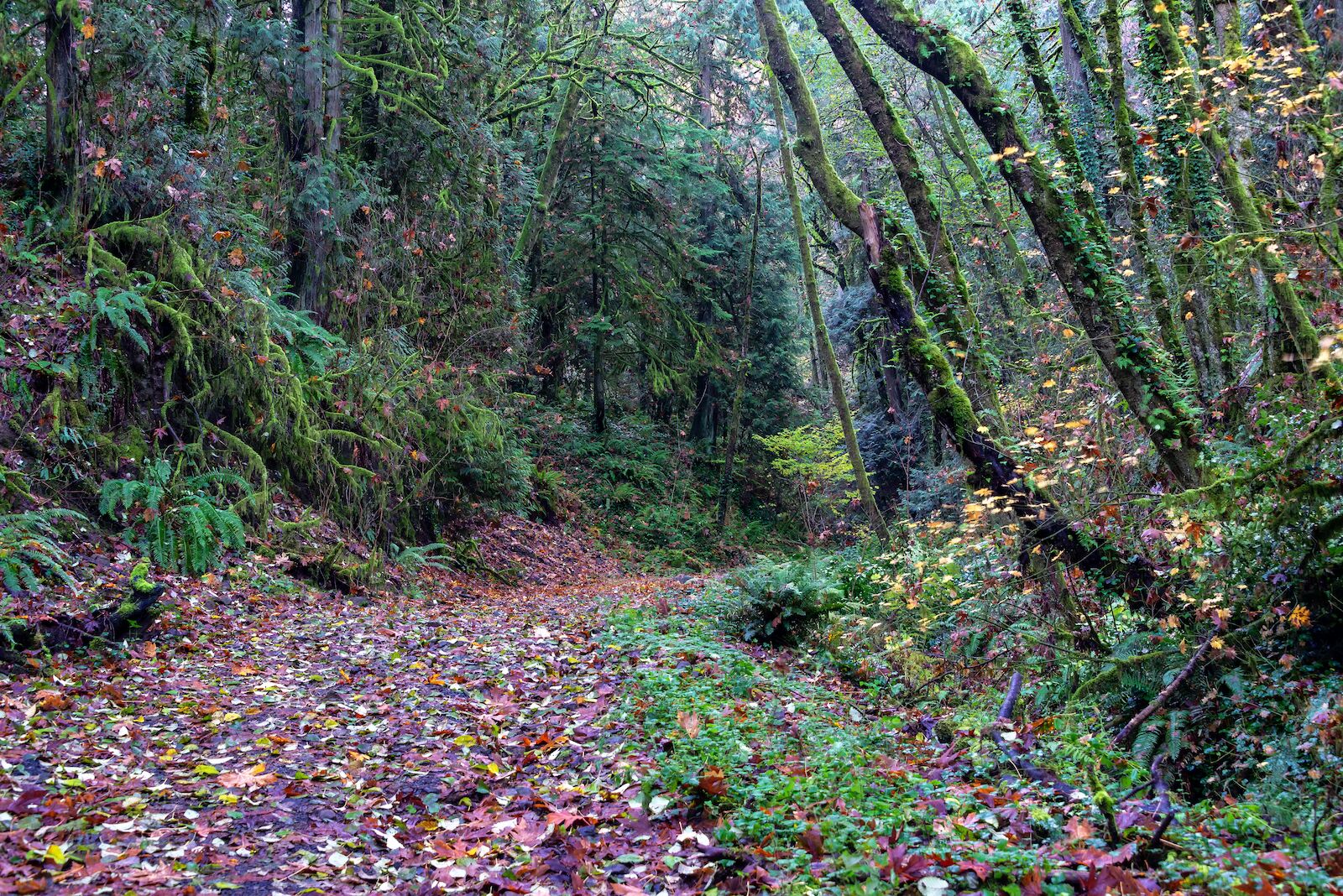 Some cities have color-coded subway maps to help people around the city. In southwest Portland, they have colorful hiking trail maps that guide you in and around neighborhoods through a series of nature trails. The trails crisscross the hills of expensive houses and expansive views, through city parks and into deep woods. For a serious workout, hit Trail 1, which starts at the OHSU waterfront and shoots straight uphill to Marquam Nature Park ending at Raleigh Park in Raleigh Hills.

You can also traverse the entire length of southwest Portland along the 10.6-mile Trail 6, which meets Trail 1 inside Marquam Park. It has the best views of the eastern side of the city, and though it can be hilly, it is definitely worth the effort. The North-South Trail 7 is a little shorter at only 8.7 miles, but lets you take breaks at attractions like the Oregon Zoo and Portland Children’s Museum. 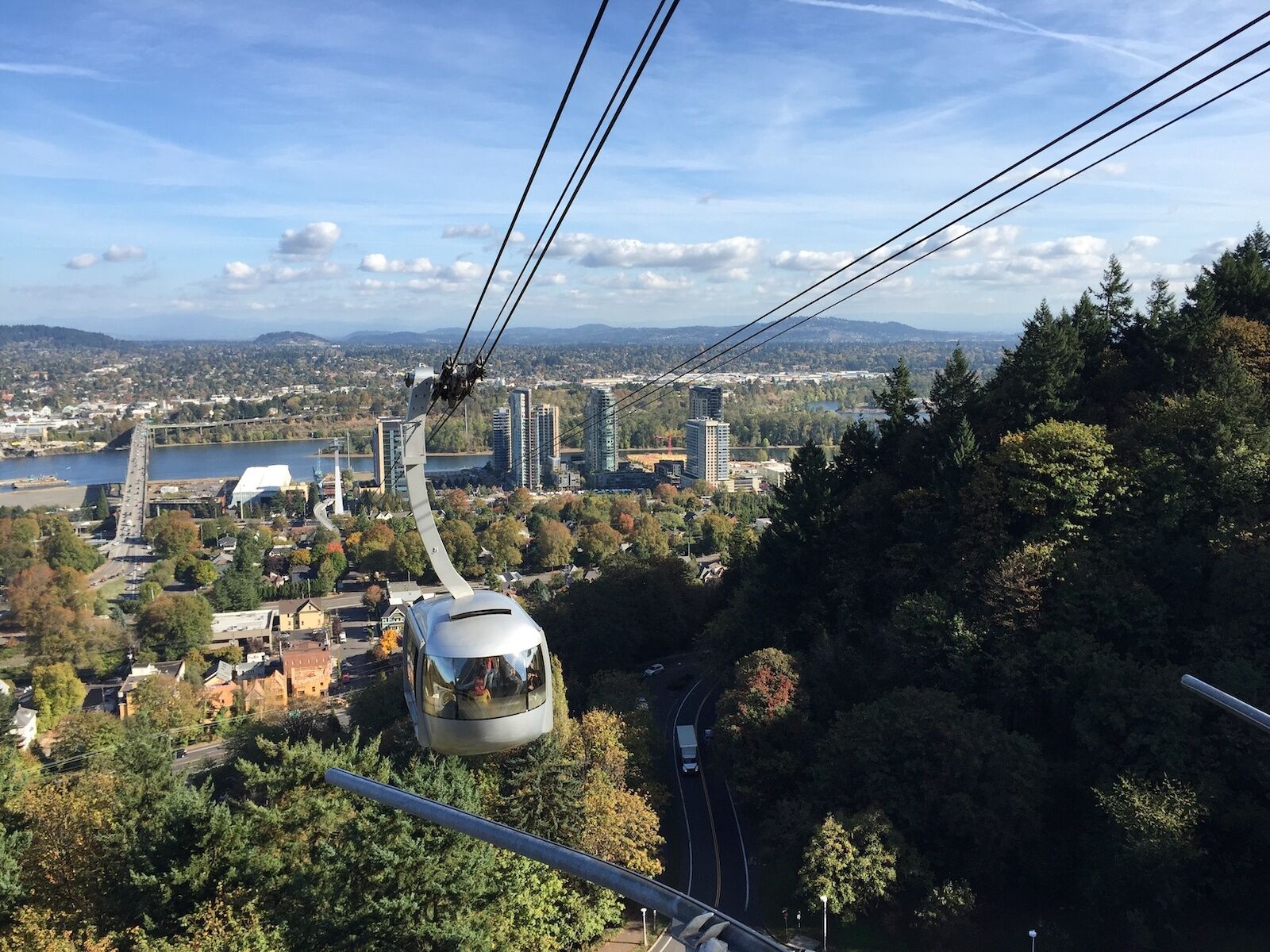 Along the west side waterfront of the Willamette River you’ll find the base of the Portland Aerial Tram, a commuter tram that takes you from the river to the top of Marquam Hill. It’s part of Portland’s 4T trail, where you can explore the city via train, tram, trolley, and trail. Once you’ve enjoyed the ride up the mountain, you can then take a four mile trail along the hilltop to the Oregon Zoo. The tram also gives you instant access to the Southwest Trails, so if you want to explore them but aren’t up for the initial climb, this is the way to go. 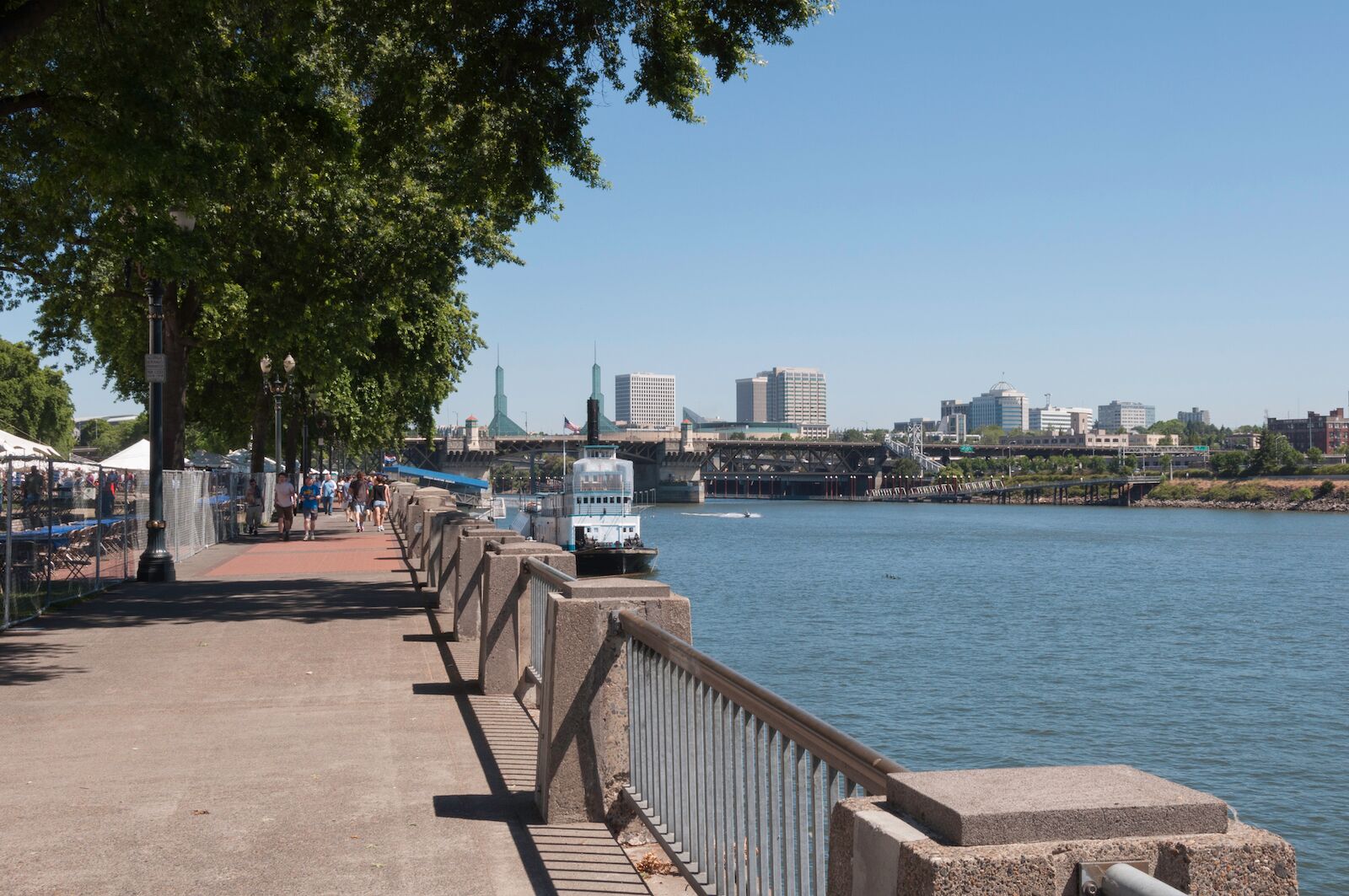 One of America’s most scenic urban greenways runs along the water in Portland, stretching from the southern suburbs up through the city alongside the Willamette River. Like most greenways, it’s a popular spot for runners and cyclists, but it also leads to other trails that travel farther into Portland’s wilderness.

One of the best side trips is in the city’s southwestern section, where you can take the greenway over the Sellwood bridge and into the Oaks Bottom Wildlife Refuge. Here, you’ll hike through giant fir and maple trees to a low lying wetland that turns purple with wildflowers during the summer. Head north from there and you’ll hit the Tilikum Crossing, Portland’s iconic cable-stayed bridge. You can then head downtown, or hike through the hills on the west side of the Willamette river for an eight-ish mile loop back to the greenway. 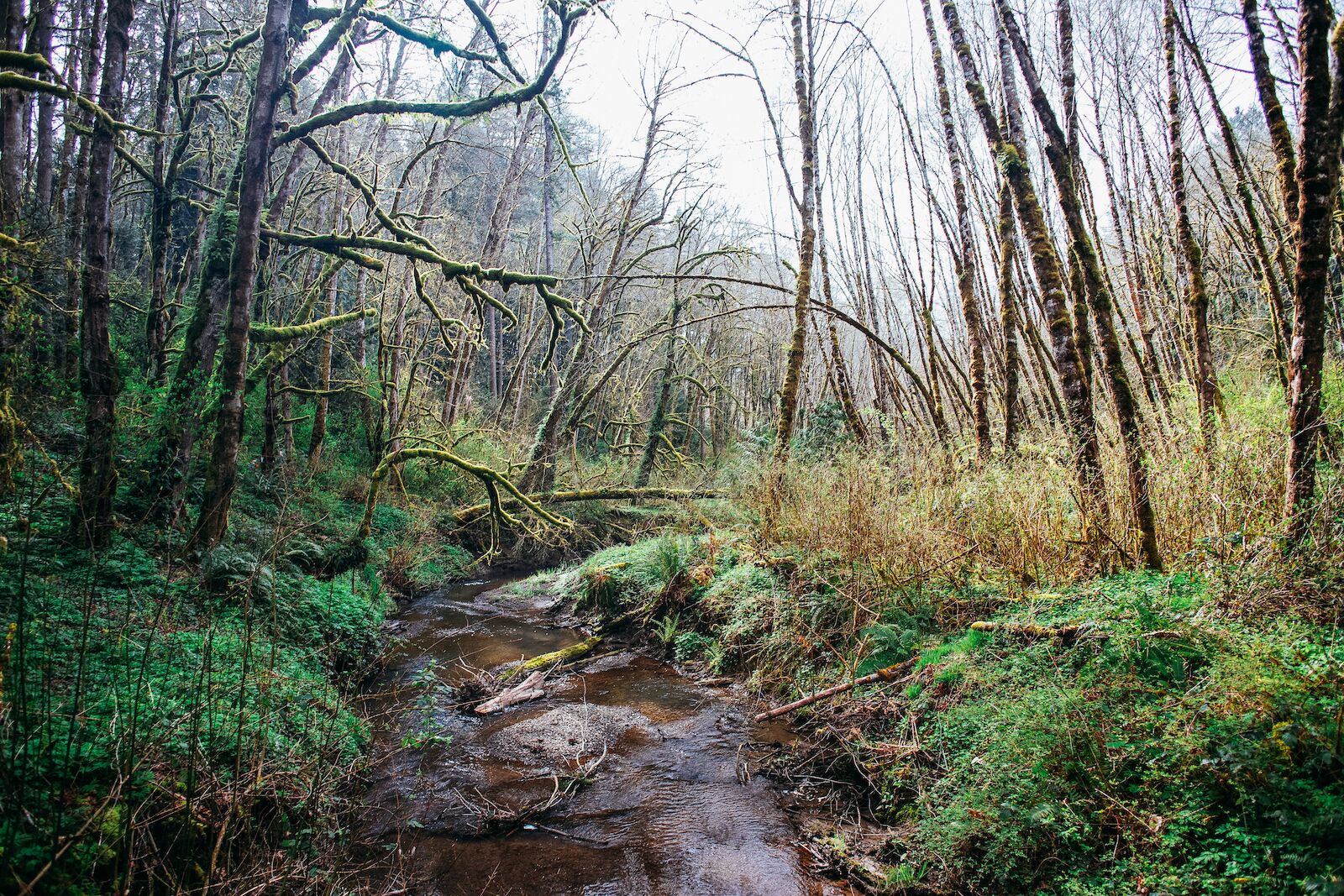 Tryon Creek is the only state park in Oregon located in a major metropolitan area, about 15 minutes south of downtown just north of Lake Oswego. The 658-acre swath of second growth forest offers an instant immersion into northwest wildlife, where birds, squirrels, and other small animals scamper among tall fir and deciduous trees. You can do the whole park in half a day, as the eight miles of trails make the entire landscape accessible to most. You’ll also cross eight bridges over the creek, meaning you’re never at a loss for photo ops. And if all the hiking has you tired out you can take a rest on the woodland boardwalk and enjoy the sounds of the forest. 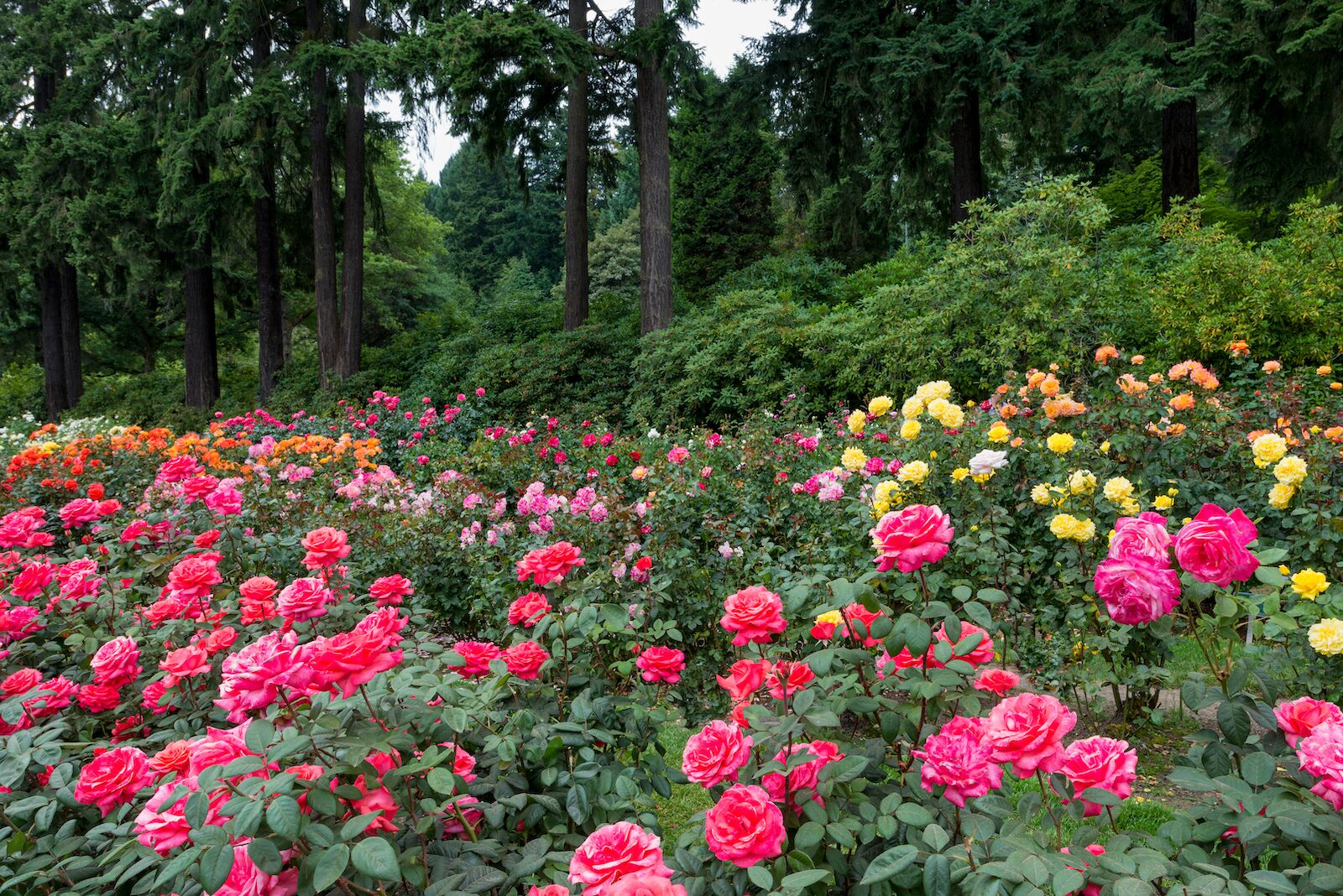 Portland’s famous International Test Rose Garden sits inside sprawling Washington Park, which is defined by 410 acres of trees, flowers, and historic monuments. While you should absolutely take the time to, literally, stop and smell the over 10,000 roses in the oft-photographed garden, Washington Park also is where you’ll find the Portland Japanese Garden, which feels a little like Okinawa in the middle of a temperate PNW rainforest.

For woodsy hiking, venture into the Hoyt Arboretum, where 12 miles of trails wind between 2,300 species of trees from across the world. The “living museum” was designed to showcase and preserve trees that people would otherwise have to cross the globe to see, and if you know what to look for it’s one of the most unique hiking experiences on the planet. 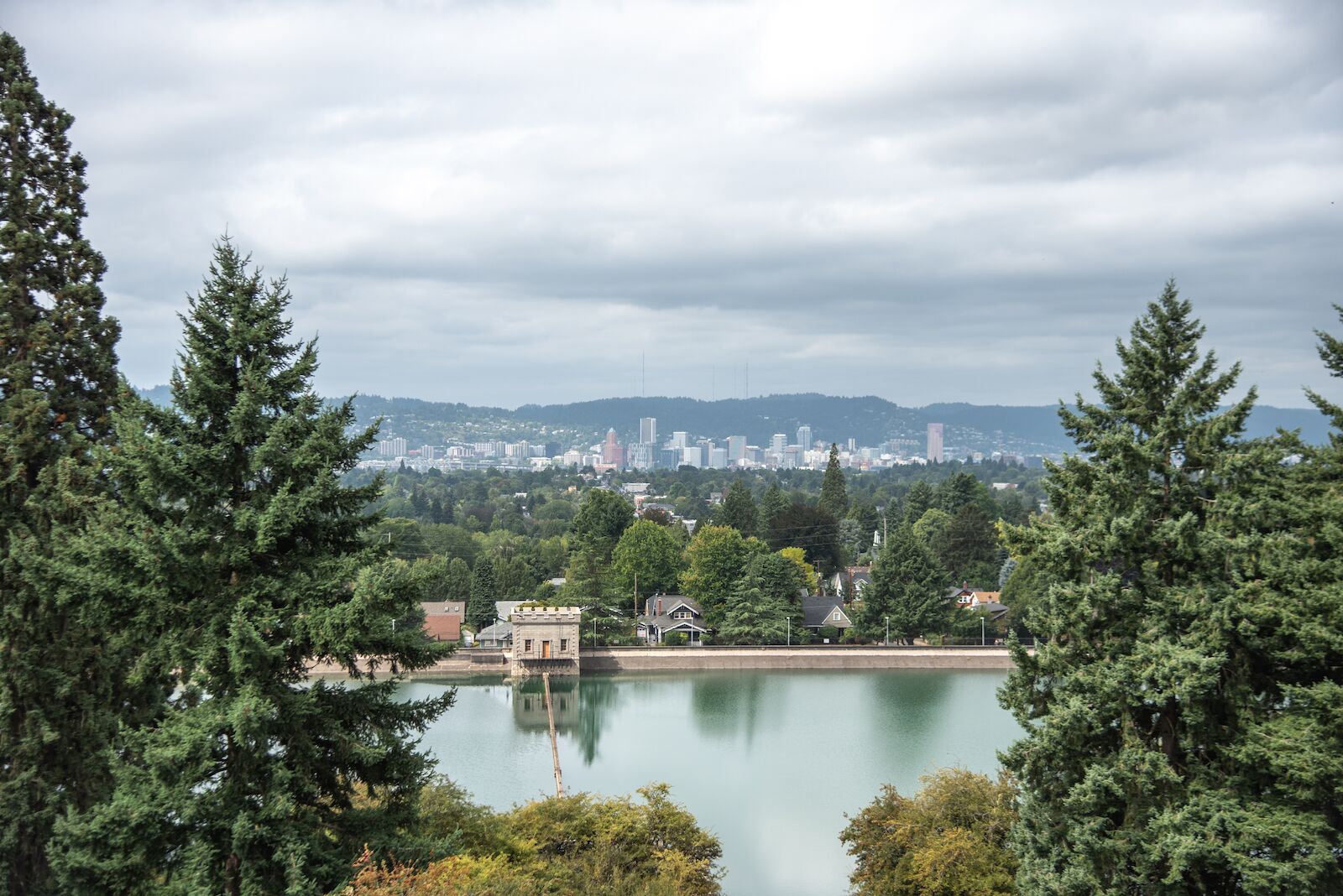 No place is better to end the day outdoors than Mount Tabor Park in southeast Portland. Though it’s not technically the highest point in the city, the 636-foot summit of this once-active volcano offers the best vistas for both sunrise and sunset, with perfect views of the city skyline and Mt. Hood in the distance. Though it can skew hilly, hiking here is still pretty easy, and trails as short as a mile wind you through 191 acres of wilderness. You’ll often find sunset yoga classes sharing the top of the mountain, and once a year the park also hosts Portland’s Adult Soap Box Derby, where grown men and women race down a mountain in home-made go karts.

Hiking6 Must-See Waterfalls Near Portland You Can Reach in Half an Hour
Tagged
Hiking Outdoor National Parks Portland, OR, United States
What did you think of this story?
Meh
Good
Awesome