There’s a feeling of undeserved shame that comes with visiting Alaska in the winter and not seeing the northern lights. If you went to the 49th state during aurora season — August 21 through April 21st — you can bet people will excitedly ask you, “Did you see the northern lights?” and wait hopefully for your response. Nevermind the epic dog sledding, snowmobiling, ice fishing, snowshoeing, or other winter adventures you may have done; admitting that you missed the lights will be met with a deflated “Oh…” and a quick change of subject.

Alaska is almost synonymous with the aurora borealis; it captures our imaginations like a mythological phenomenon and many plan their entire vacations solely around seeing them. Although not seeing the lights won’t ruin your trip, let’s be real. Seeing them will make it a whole lot better. Whether you’re already planning an Alaska trip or heading to the Last Frontier specifically to chase the lights, make sure you budget a few days to see the northern lights in Fairbanks.

What exactly are the northern lights? 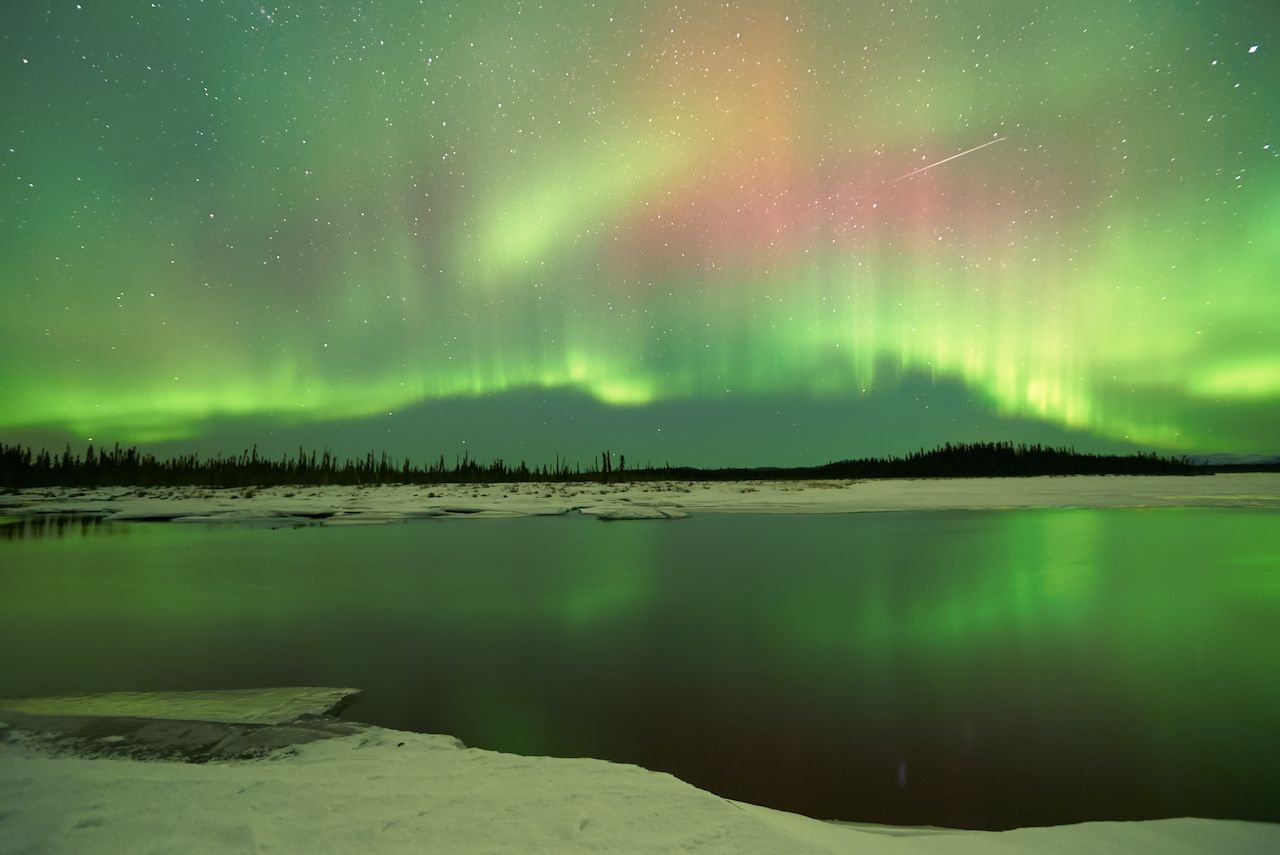 Everyone knows what the northern lights look like, but the science behind what actually causes them tends to be more mystifying. The northern lights are a natural celestial phenomenon, called aurora borealis in the north and aurora australis in the south. The aurora originates on the surface of the sun, when solar activity produces a gas cloud called a coronal mass ejection (CME). When one of these ejections reaches our planet two or three days later, it collides with Earth’s magnetic field, which deflects the solar flares. However, these currents of charged particles flow into the northern and southern polar regions, since the magnetic field is weaker there. The result is dazzling, as light shifts and courses throughout the sky.

The striking colors of the aurora change depending on the types of atoms and ions colliding with the atmosphere. The color is also affected by altitude, since the ions collide with different gases, depending on the elevation above Earth. Blue-violet and red colors appear below 60 miles, bright green is strongest between 60 and 150 miles, and ruby reds appear when the ions are more than 150 miles above Earth. (Earth’s atmosphere reaches 300 miles high.)

Unfortunately, it takes more than a clear day to be certain of spotting aurora activity. The most important factor in predicting the aurora’s appearance is sunspot and solar flare activity. Sunspot activity operates on an 11-year cycle, with the number of sunspots and solar flares increasing in frequency until the solar maximum is reached. The more solar activity, the higher the likelihood of seeing the aurora. Right now, we’re approaching peak solar activity, with the solar maximum expected to occur between 2023 and 2026. This means if you plan a trip to Alaska within the next year or two, your chances of seeing the aurora are significantly higher.

Fairbanks is the unofficial aurora capital of the US 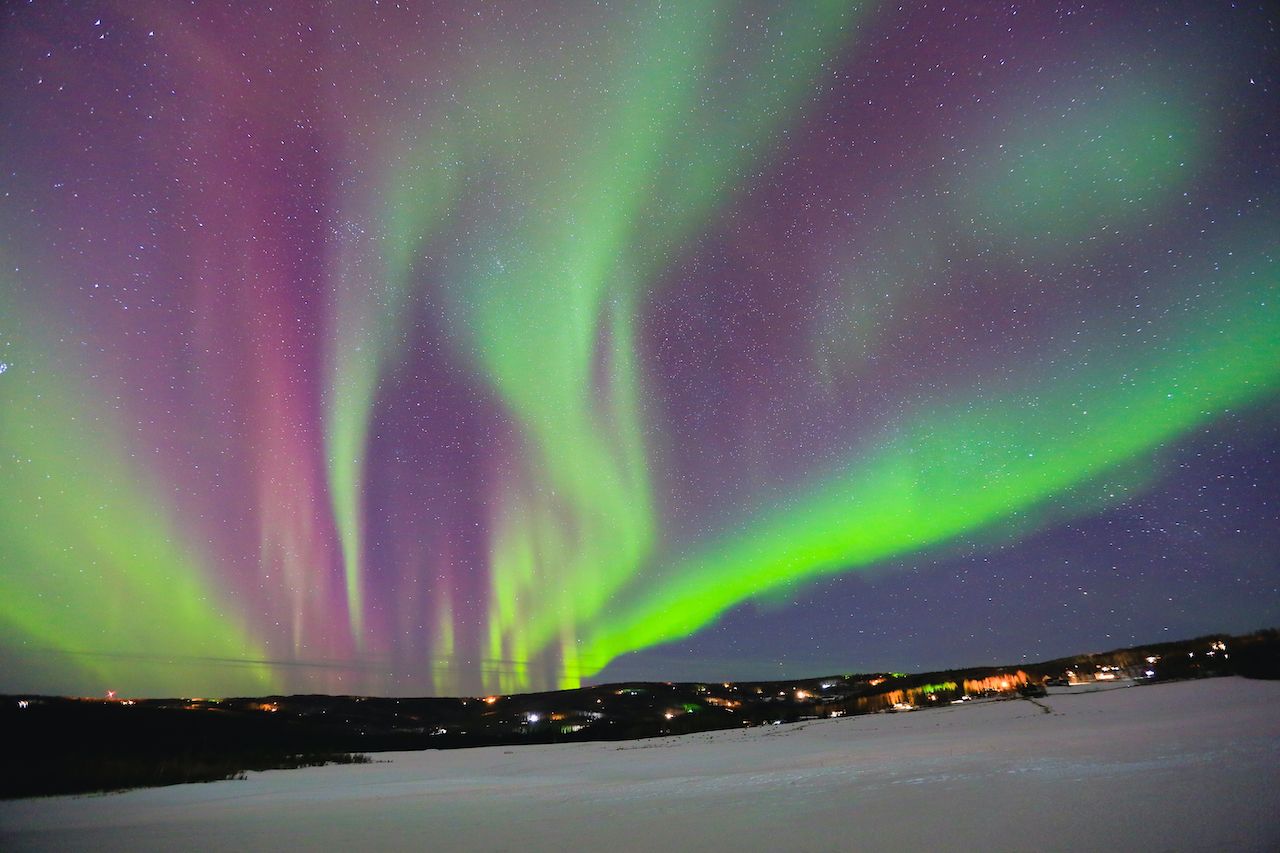 If you’re really lucky, and if solar activity is extremely high, you might be able to glimpse the aurora from northerly states like Minnesota, Michigan, and Maine, but to have a consistent chance of seeing the lights all winter, Alaska reigns supreme. Quite simply, it’s just farther north than everywhere else in the country. Much farther. Fairbanks sits at a latitude of 64.8 degrees, and is widely considered by Alaskans to be the best place for viewing the phenomenon.

Fairbanks is ideally located under the “Auroral Oval,” a ring-shaped zone over the far north where aurora activity is at its highest. A heavy concentration of solar activity happens here, which is the most important factor for predicting an appearance of the aurora borealis. But regardless of solar activity, if the skies are cloudy you won’t even be seeing stars, much less the northern lights. Fairbanks’s distance from the coast and low precipitation results in consistently clear nights. The lights appear so frequently above Fairbanks that people staying at least three nights — and actively keep their eyes peeled for the lights — increase their chances of seeing the aurora by 90 percent.

The best ways to see the northern lights 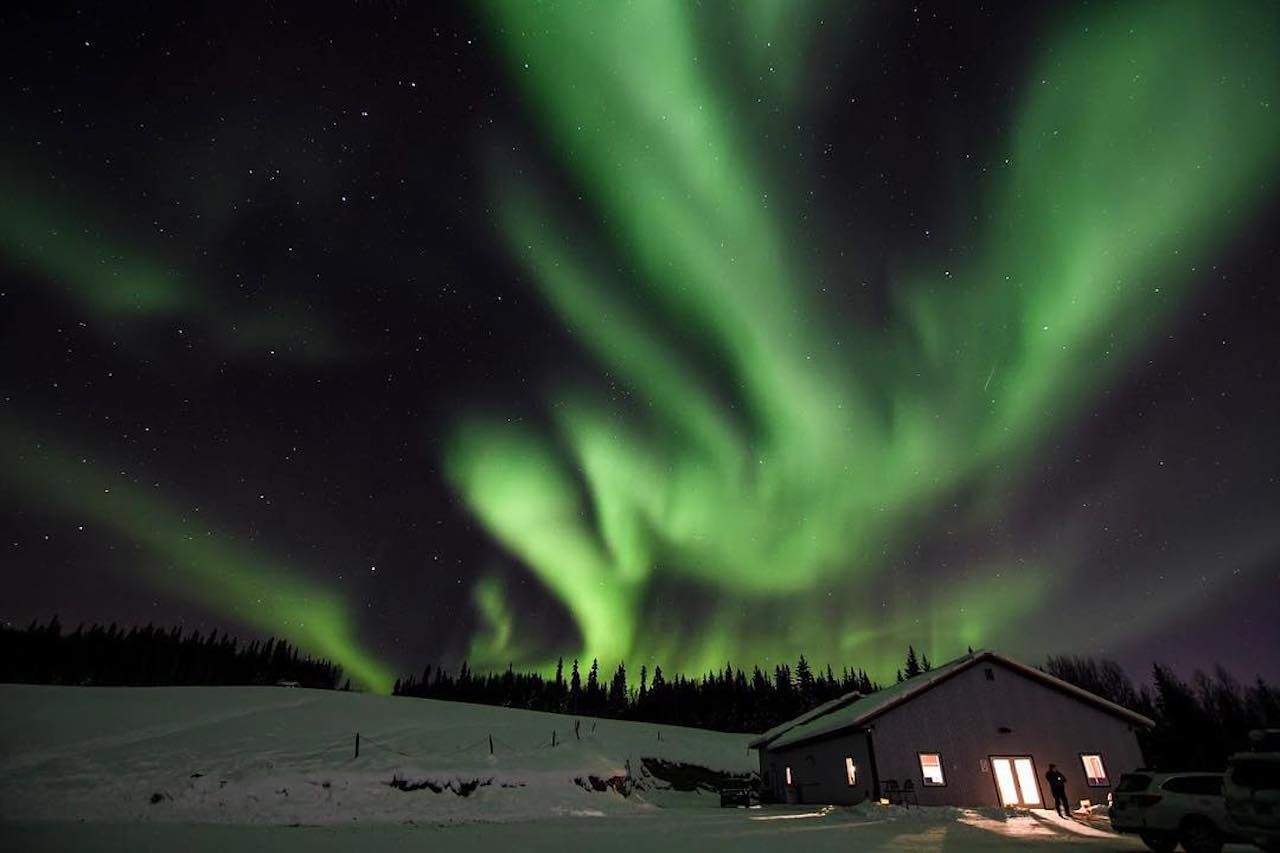 It’ll take a bit more effort than just booking a flight and showing up in Fairbanks, however, to actually have a memorable northern lights experience. While Fairbanks isn’t exactly New York City, and on occasion you can definitely see the lights from your hotel parking lot, the ideal viewing experience will bring you a bit farther afield and away from light pollution.

One of the best and most convenient places to see the aurora is Aurora Pointe, newly opened in 2018 with the express purpose of giving people a venue for viewing the lights. Located about 20 minutes from town, this building sits on 280 acres of private land, and is designed to make aurora viewing as painless as possible. Aurora Pointe is equipped with coffee, board games, cards, and professionally taken aurora photographs to keep you entertained while you wait for the lights. You’ll likely be sharing the venue with over a dozen others, all waiting to see the same epic phenomenon. Nothing fosters a sense of community quite like staying up until 3:00 AM to see a celestial event that may never actually happen.

About 22 miles north of Fairbanks, Clearly Summit has the potential to be a much more rugged aurora experience. In the heart of winter, a four-wheel-drive vehicle is a must. Prepare for some steep roads and sharp turns, and when you get there, don’t expect any board games or coffee machines. But it’s worth it. You might be sharing the remote lookout point with other cars, but otherwise it’s just you and the great outdoors. To really commit to the experience, you can even rent a cabin there for a night and, after a long evening of watching the sky, wake up early to go snowshoeing right in your backyard.

Former home to the Murphy Dome Air Force Station, the site now serves primarily as a popular place for watching sunsets in the summer, and the northern lights in the winter. There were once a dozen buildings on the site, but all have been cleared away except for a single domed Radar Range Station, which detects military air threats. Murphy Dome is the highest point in the Fairbanks area, at 2,877 feet in elevation. From here, you’ll be able to enjoy a 360-degree horizon with unobstructed views of the valley below and, of course, the sky above.

As you could probably tell from its complex scientific underpinnings, predicting when the lights will or won’t show up is very difficult. Many visitors to Alaska plan their entire trip around seeing the northern lights, but the truth is, the atmospheric conditions and space weather might not cooperate. The key to seeing the lights is persistence. Peak aurora hours are between 10:00 PM and 2:00 AM — though often they show up even later — so if you’re out until 2:00 AM every night for a week, your chances of seeing the aurora are pretty good. It’d be nice to pull up your iPhone’s weather app and just check if the aurora is in the forecast, but unfortunately that’s not how it works. You can, however, monitor the Aurora forecast. This is a tool developed by the University of Alaska Geophysical Institute to track the northern lights and attempt to predict their strength. Aurora Tracker is a similar, slightly more user-friendly, tool that allows you to search by location. 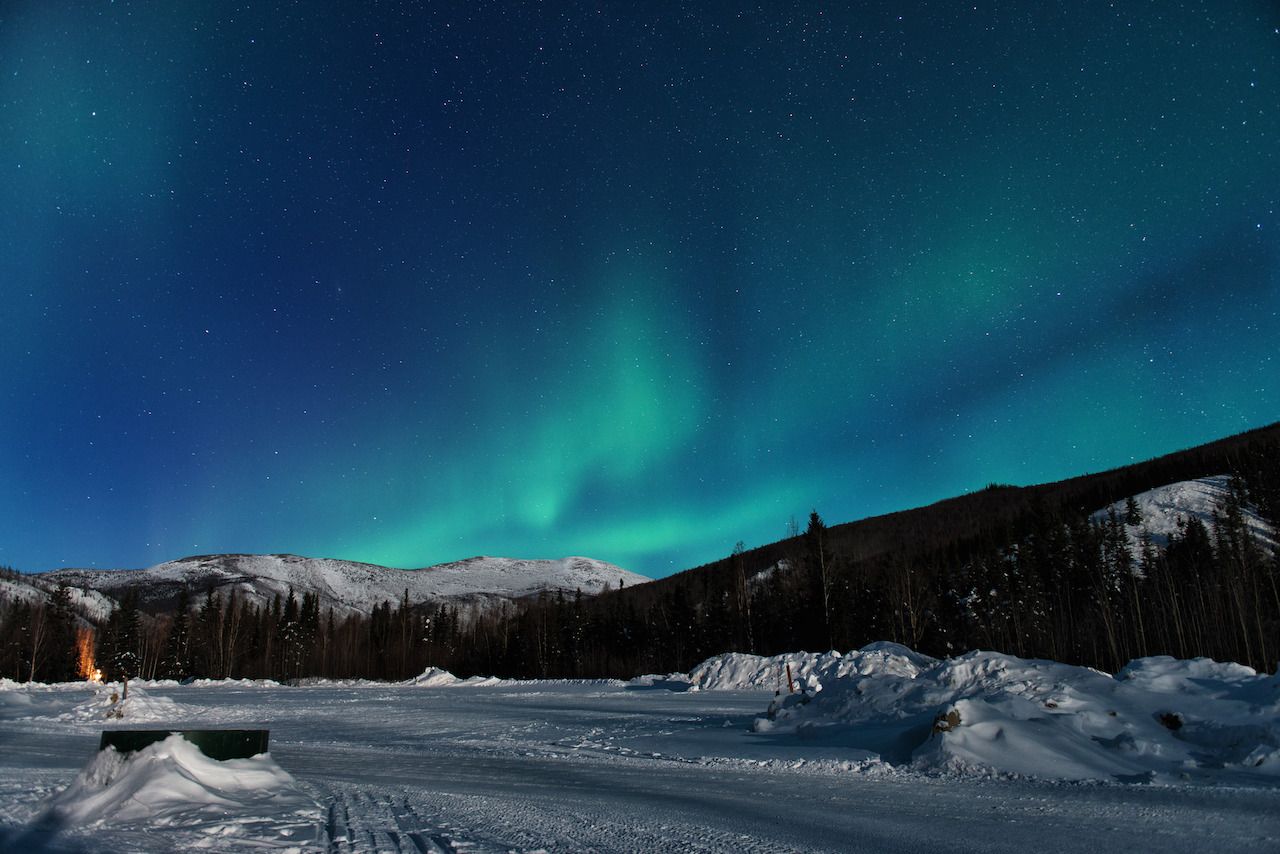 It might sound like a lot of work just to glimpse some lights in the sky, but if seeing the aurora was easy, it wouldn’t be nearly as memorable. The northern lights aren’t just about the “seeing,” but the “chasing.” It’s the potentially arduous, hopeful, sleep-deprived search for the elusive phenomenon. When you do finally see them, that makes it even more special.

AstronomyThe 6 Most Epic and Unique Ways To See the Northern Lights
Tagged
Astronomy Insider Guides Fairbanks, AK, United States
What did you think of this story?
Meh
Good
Awesome

Take a Reindeer Yoga Class at This Ranch in Alaska

Why You Shouldn't Fear the Prop Plane