A waiter placed a platter of bone marrow and plate piled with lettuce, tomato, and tortillas. I assembled my bone marrow taco, squeezing lime juice on top and garnishing with cilantro, and gave it a taste. As I chewed the bone marrow, I began to understand why locals so effusively praised the food here in Austin. The buttery bone marrow as creamy and rich, an exciting twist on the typical taco that helped explain the ever-evolving food scene in Austin. This city isn’t turning its back on its Texas roots but it is adding its own distinct flavor to already legendary state cuisine. Here, chefs and restaurant owner explain how the best restaurants in Austin are making a name for themselves in Texas.

Austin wasn’t always known for its food trucks, spiced and smokey Asian cuisines, seafood, or even its now-famous breakfast burritos. About a decade ago, the city started to play host to restaurants with Mexican, modern American, Indian, Thai, Asian, and Caribbean, influences, which have solidified its status as one of the most interesting and exciting places to eat in Texas.

“I think there is a little more of a willingness to try new things here than in other parts of Texas,” says Nick Erven, executive chef at Wax Myrtle’s. “There is not a long history of food here, so I think the scene adapts and evolves as it goes along. Its identity is still being decided.”

The rest of Texas is known for its barbecue, tacos, Tex-Mex, and tequila, but this city hasn’t yet landed on speciality. Instead, this vibrant city embraces every new style of cuisine that pops up.

“I think the restaurant scene has gotten better and more diversified,” says CJ Jacobson, the chef at Aba, which specializes in kebabs, hummus and falafel. “Where else can you get awesome Bahn mi, smoked brisket, spicy ramen, great Mexican, and groundbreaking Caribbean food in one place.”

This welcoming atmopshere (at least when it comes to good food) provides the perfect opportunity for chefs and other culinary artists to advance in their craft — and the environment in Austin is especially supportive.

“On one hand, the maturing culinary scene provides many opportunities for people in the industry to continue learning and expanding their skills. The local restaurant community continues to grow in a tight-knit, supportive way. It promotes fostering beneficial relationships with a growing number of regional farmers and ranchers,” Krystal Craig and Ian Thurwachter of Italian restaurant Intero, wrote to Matador in an email.

Food trucks were likely the catalyst for better, more creative food blossoming in Austin, according to CJ Jacobson. Today, however, visitors cna find Texas classics like barbecue and tacos, alongside quirky restaurants that might surprise the Texas food purist. And new restaurants continue to open all the time.

“I think [Austin’s food scene] has just grown. Ten years ago, there were fewer restaurants. I think we have got quite a bit more notoriety, not because the restaurants have necessarily been better, but because Austin has become more famous,” says Erevn. “Over time, though, I think that the scene will evolve into having a greater variety of really quality places all over the city, not just a few scattered in select neighborhoods.”

Austin continues to attract droves of tourists – at one point for the well-established scene and hipster vibes, and now for the restaurants, too. It’s no where near done evolving.

“Austin is still a growing city. We do have established, iconic spots to eat, but in general, Austin’s restaurant expansion has primarily been in the last 15 years, making it an interesting time to see more diverse types of cuisine become available than we’ve ever had before,” wrote Craig and Thurwachter.

Here are the best restaurants in Austin to try on your next visit.

The best restaurants to eat at in Austin

This restaurant, home to the bone marrow taco, bills its menu as a modern take on traditional Mexican cuisine. Expect grilled octopus paired with salsa and a smoked fish tostado on the menu at Comedor.

Terry Black’s is probably the best known barbecue restaurant in Austin. This smoker does everything: You’ll find turkey, pork ribs, and sausage on the menu. Make sure to get there early, though, as the lines are always out the door.

The menu at this Mexican restaurant celebrates all things masa, prepared using traditional methods. Diners at Suerte will be treated with mole made with butternut squash, roast chicken, and slow cooked carnitas. Agave is the centerpiece of the cocktail menu.

Juan in a Million

A post shared by Juan In A Million Restaurant (@juaninamillionrestaurant)

Breakfast tacos, like nopalitos with egg, are the thing to try at restaurant. Chalupas, enchiladas, and a Texas style steak dinner stand out on the lunch menu.

Japanese bento boxes are the specialty here. Bento Picnic lets diners assemble their own meal: Start with protein salmon or tofu, and pair it with rice or noodles. Snacks to enjoy on the side include ume plum potato chips and chicken karaage. Pair the whole meal with a beer bucket at happy hour.

At this simple cafe, where the menu focuses on local ingredients, breakfast tacos are also on the menu. But the star of the show at FoodHeads are the sandwiches which feature slices of ham and bacon, pulled pork, smoked gouda, jalapeno relish, capers, and many other mouth watering ingredients. Sandwiches can be paired with a warming cup of coup, the style of which changes daily – anything from Tuscan bean to green chile pozole.

This Japanese izakaya restaurant specializes in skewers and sushi. You’ll find all sorts of comfort food on the menu at Fukumoto from crispy crab and fried shrimp to mushroom tempura Japanese style corn dogs.

Where to stay in Austin

During my time in the big state of Texas, I stayed at two Omni properties, the locations combined the best of city life and Texas hill country life. Here is what you need to know about these hotels before booking your stay. 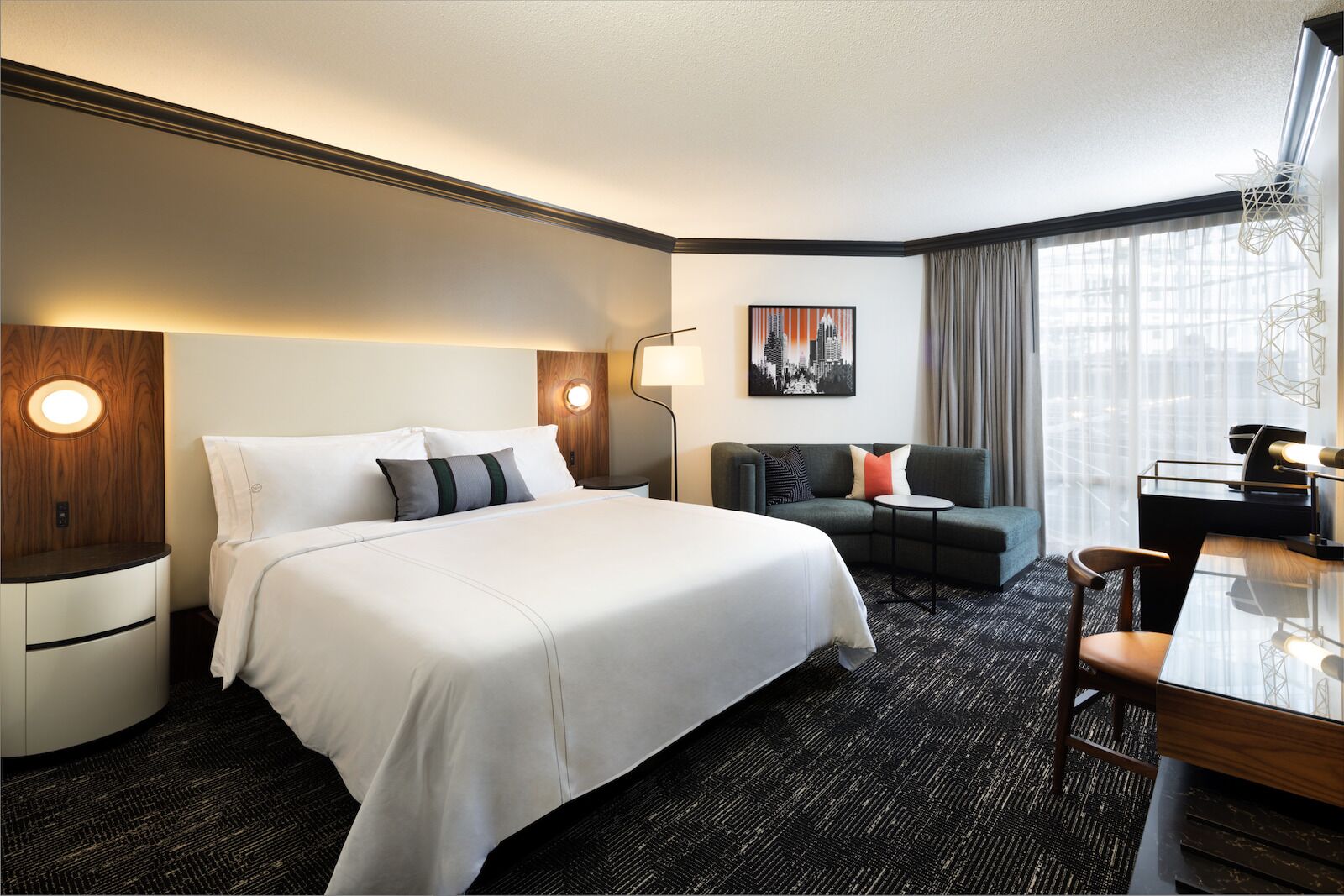 The Omni Downtown Austin has 393 rooms and suites, which the hotel recently renovated. Many of the rooms over sweeping views of the downtown area.

Omni Downtown Austin incorporates modern architecture with homages to its Texas heritage: There are pictures of the city and 3D models of different animals on the walls, but the one thing that I couldn’t take my eyes off of was the views of Downtown Austin. Along with stunning views and Texas decor, the Omni Downtown Austin is a hotel that seems to serve as a meeting place for people all over the city. It has a welcoming atmosphere. 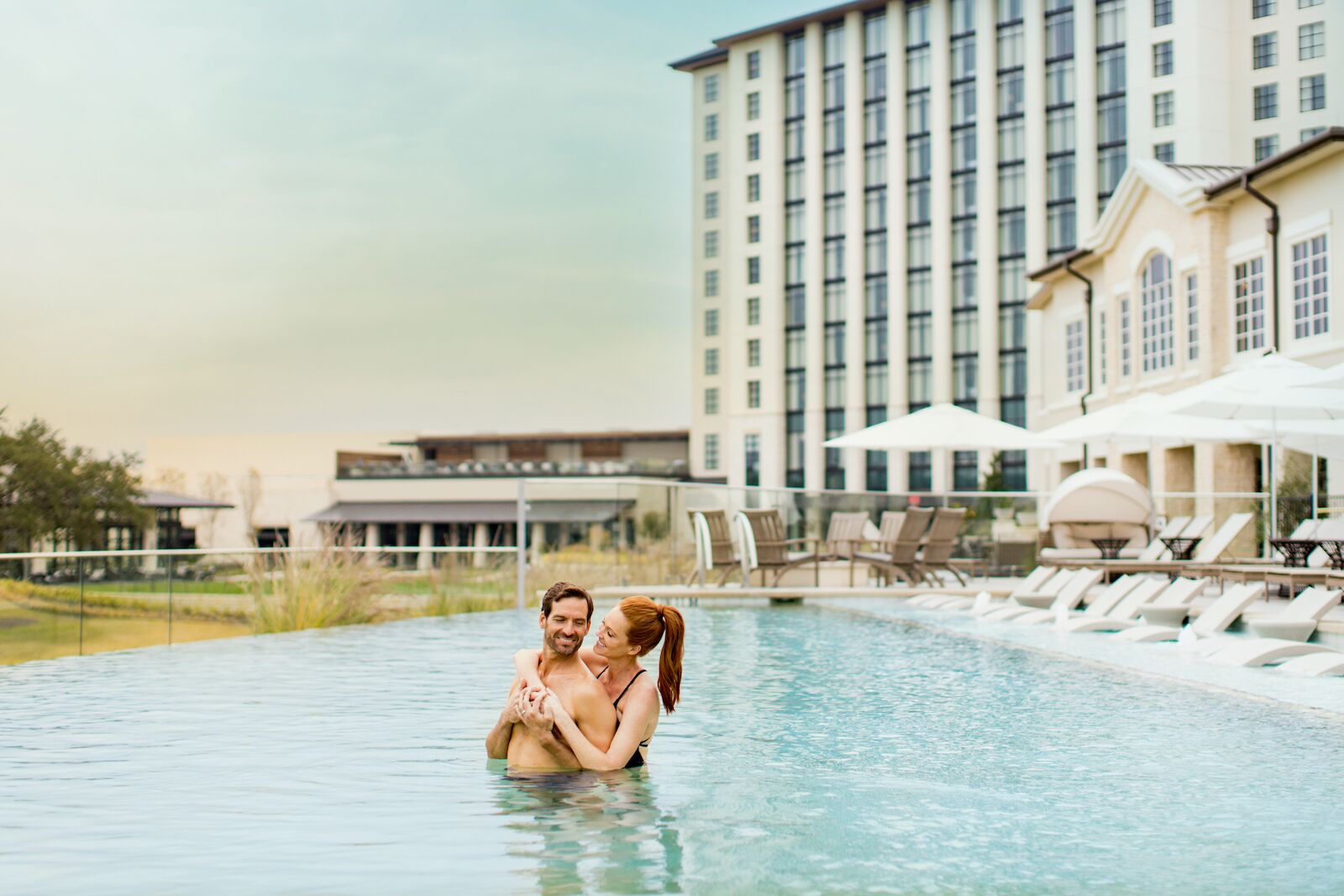 Located on 4,000 acres of land is the Omni Barton Creek Resort. If you’re looking for a quick getaway from the city, this hotel is just a 20-minute drive from downtown Austin. Omni Barton Creek features 493 rooms, an on-site spa with a pool and rooftop deck, four championship golf courses, eight dining options, four pools, and a 33,00 square foot fitness center.

This hotel is perfect for golf lovers, but it can also be a relaxing getaway for. The resort offers yoga, facials, a jacuzzi, a sauna, and a rooftop pool. The brisket sandwich is one of the best meals at the hotel. It was just the right amount of juiciness, and came with a sweet and savory barbecue sauce on the side. At night, guests can roasting marshmallows under the stars.