Las Vegas is known mostly for its casinos, but you might be surprised to learn that the biggest adrenaline rush in Sin City isn’t from a $5,000 swing at the blackjack table. In fact, Vegas is home to some of the best roller coasters and thrill rides in the country. There’s an insane zip-line above the Strip, a terrifying experience that allows you to pilot your own aircraft in the desert, a heartstopping bungee jumping experience, and a virtual reality roller coaster that simulates a trip to New York City. There’s also a few epic experiences off the strip. Here are the most thrilling attractions in Las Vegas that are more fun and fiscally responsible than gambling.

Roller coasters and rides on the Las Vegas Strip 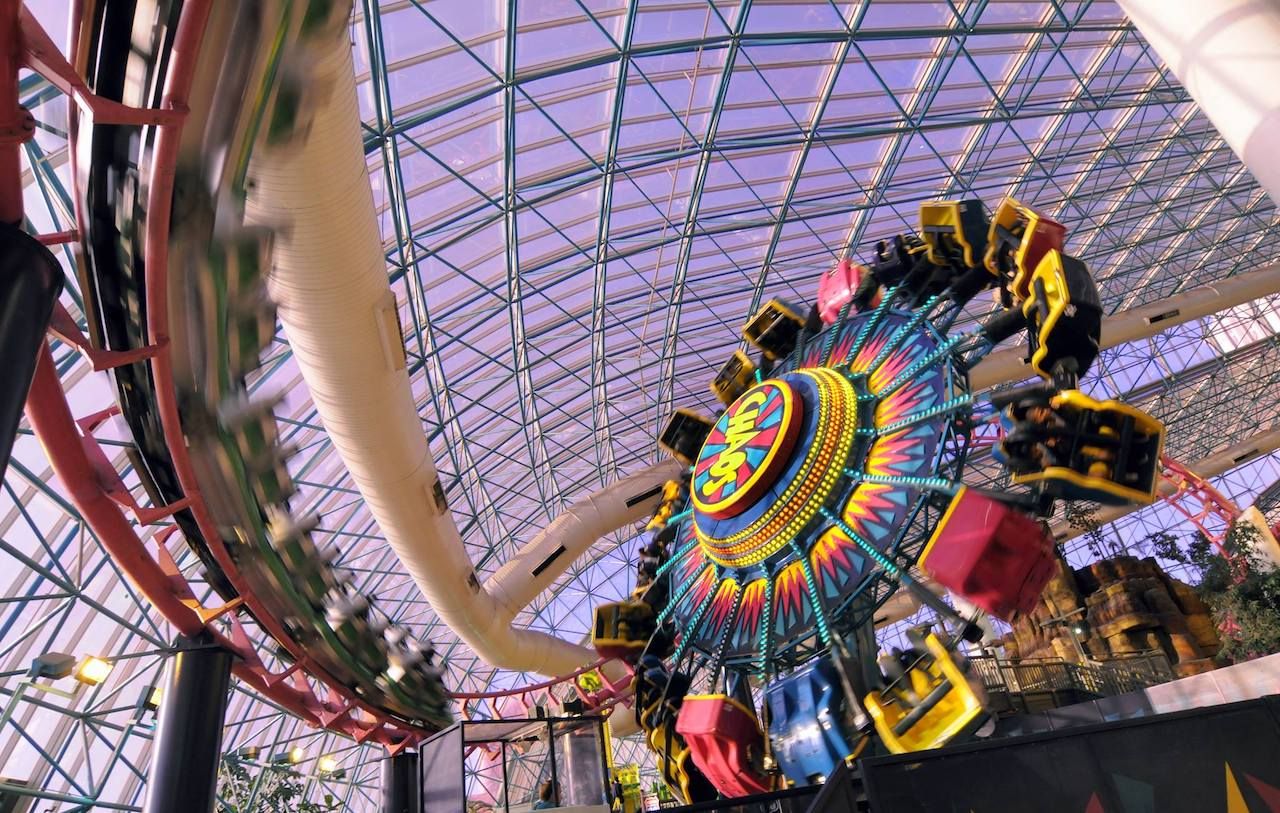 If you’re staying at Circus Circus in Vegas, you’ll barely need to leave your hotel to get a thrilling roller coaster experience. Located inside the Adventuredome — a five-acre indoor amusement park complex at the Circus Circus hotel — the Canyon Blaster isn’t for the faint of heart. With steep drops, a double loop, and double corkscrew, you’ll be glad you didn’t indulge in the hotel buffet beforehand. Although much of the ride gives you great views of the rest of the Adventuredome, at one point it actually gets so dark you can hardly see in front of you — and traveling at 55 mph is not exactly prime sightseeing speed. To enter the Adventuredome park and gain access to all of the rides, a wristband costs $33.95. 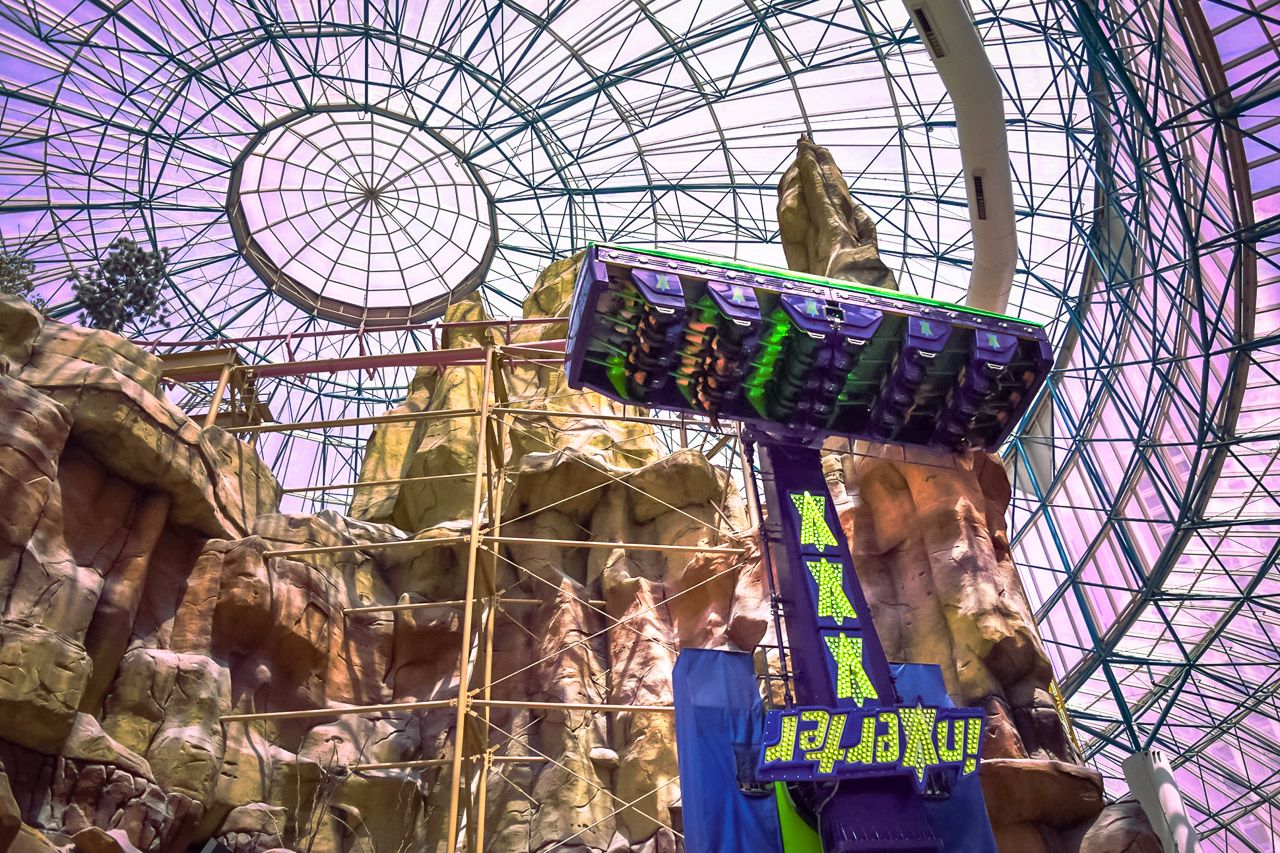 True to its name, The Inverter (also at Circus Circus’ Adventuredome) will flip you upside down and take you for a head-spinning whirl. It also pauses mid-flight to give you just enough time to have a minor panic attack before shaking and repeating, propelling you in the opposite direction and flipping you upside down again. Only a harness and T-bar separates you from the concrete floor below, but don’t worry, you (probably) won’t fall to your death. This one is only for true thrill-seekers and those craving a white-knuckle adrenaline fix. 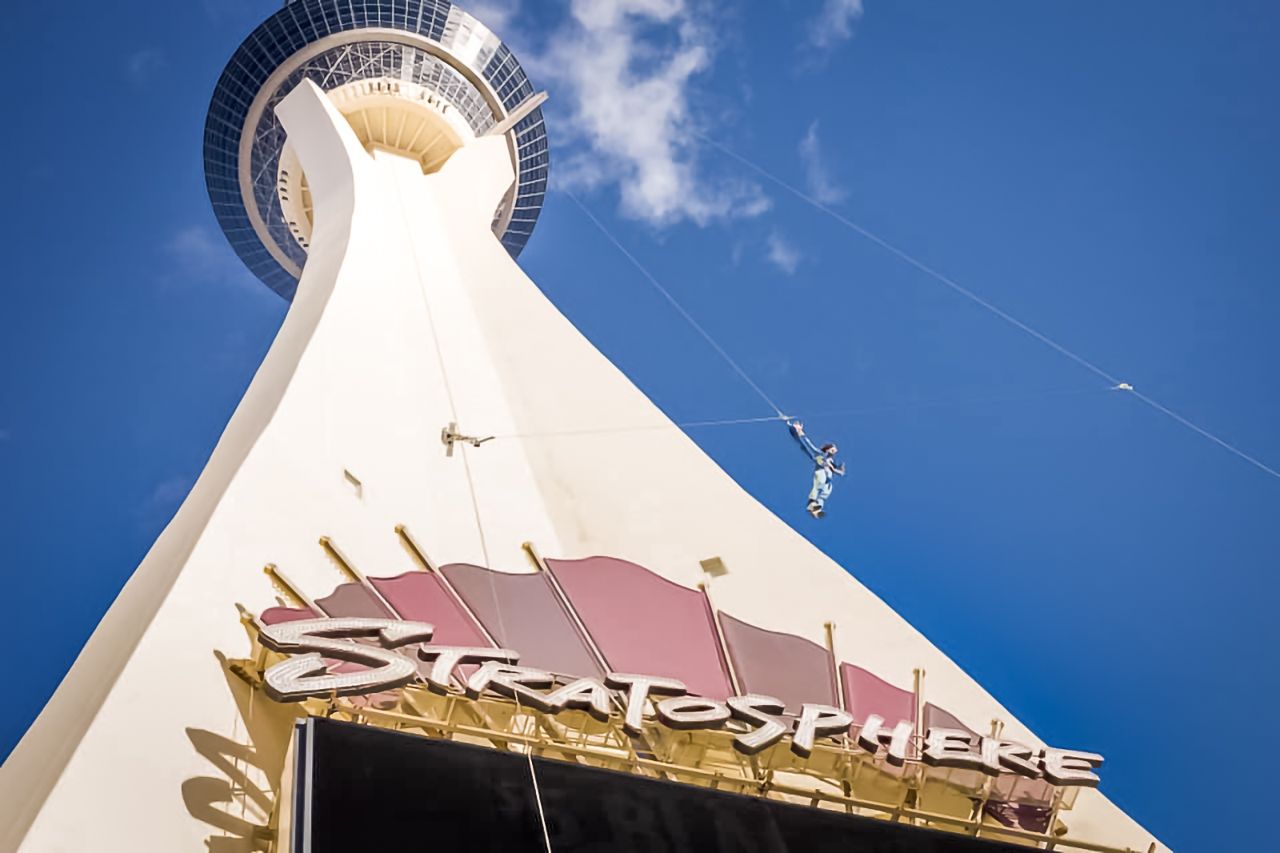 Bungee jumping off Seattle’s Space Needle is currently only a VR experience, but in Vegas you can do the real thing at the STRAT Hotel, previously called The Stratosphere. The view of the Strip from the top is simply incredible, and bungee jumpers certainly understand the thrill of such a dramatic drop. With an 855-foot fall, the experience holds a Guinness World Record for the highest commercial decelerator descent facility. SkyJump is $129.99 per jump, and you must be 14 years or older to zoom toward the ground at 40 mph. 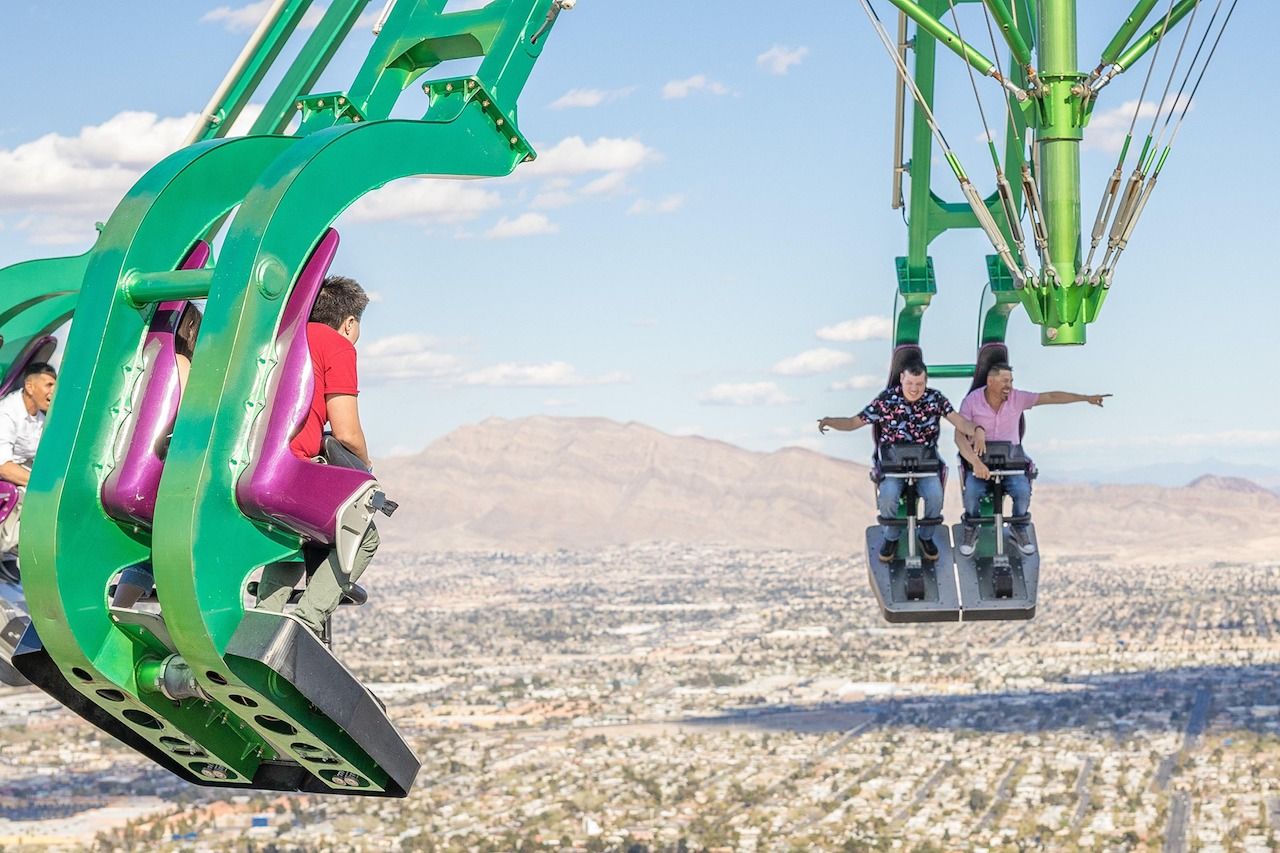 If you’d rather not free-fall off the STRAT, you can always take the tamer route with Insanity — a ride that dangles you 866 feet in the air and spins you around, all while forcing you to stare at the ground. A massive mechanical arm extends 64 feet from the edge of the STRAT and spins you at speeds of up to 65 miles per hour. The real accomplishment isn’t even taking the ride — it’s keeping your eyes open. Adult admission costs $25 per person, with children 12 and under at $14. Keep in mind that you must be at least four feet tall to ride. 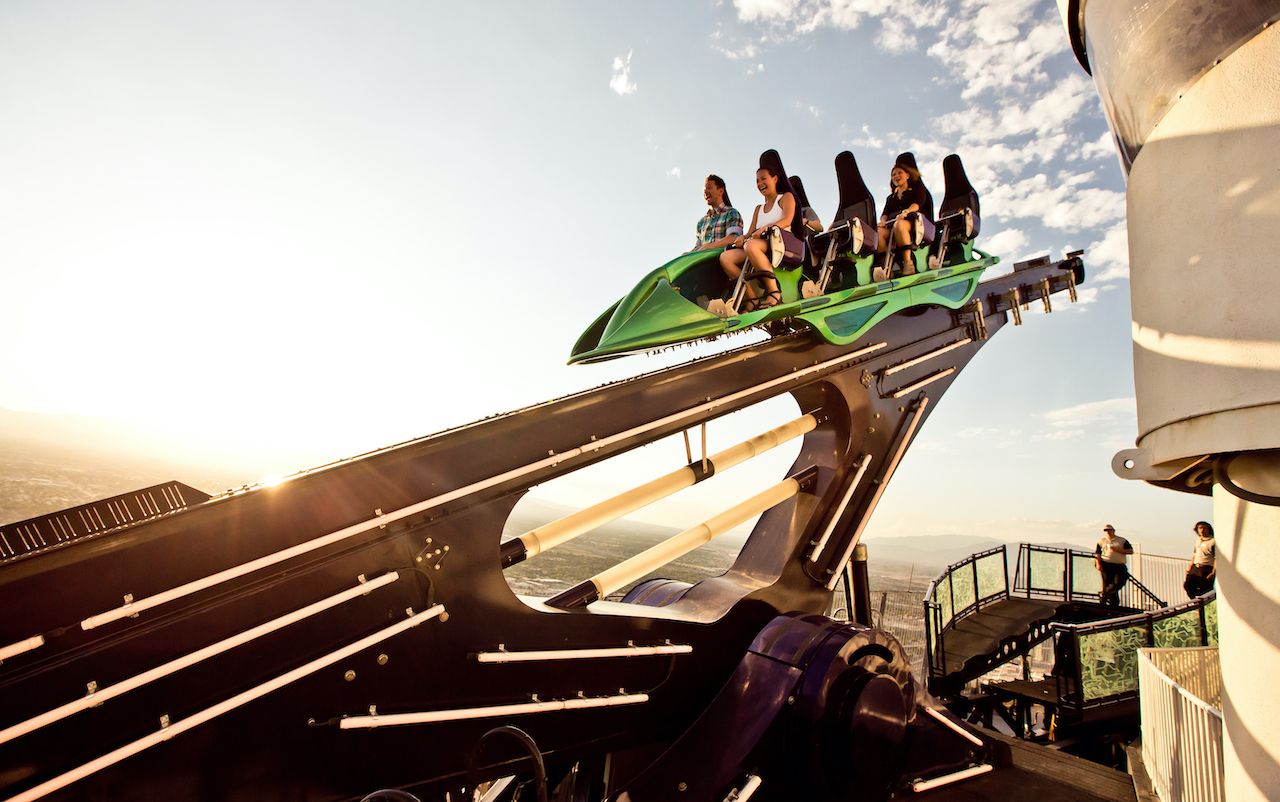 Also located at the STRAT, X-Scream is basically a giant seesaw 866 feet in the air. It propels you 27 feet over the edge of the STRAT, where you will dangle briefly above the strip before being pulled back — and it repeats over and over again. Even though you can anticipate the undulating motions, the ride is designed to surprise you and make you feel like you’re constantly at risk of falling from the building. Adults cost $25, children cost $14, and you must be at least four feet tall to ride. 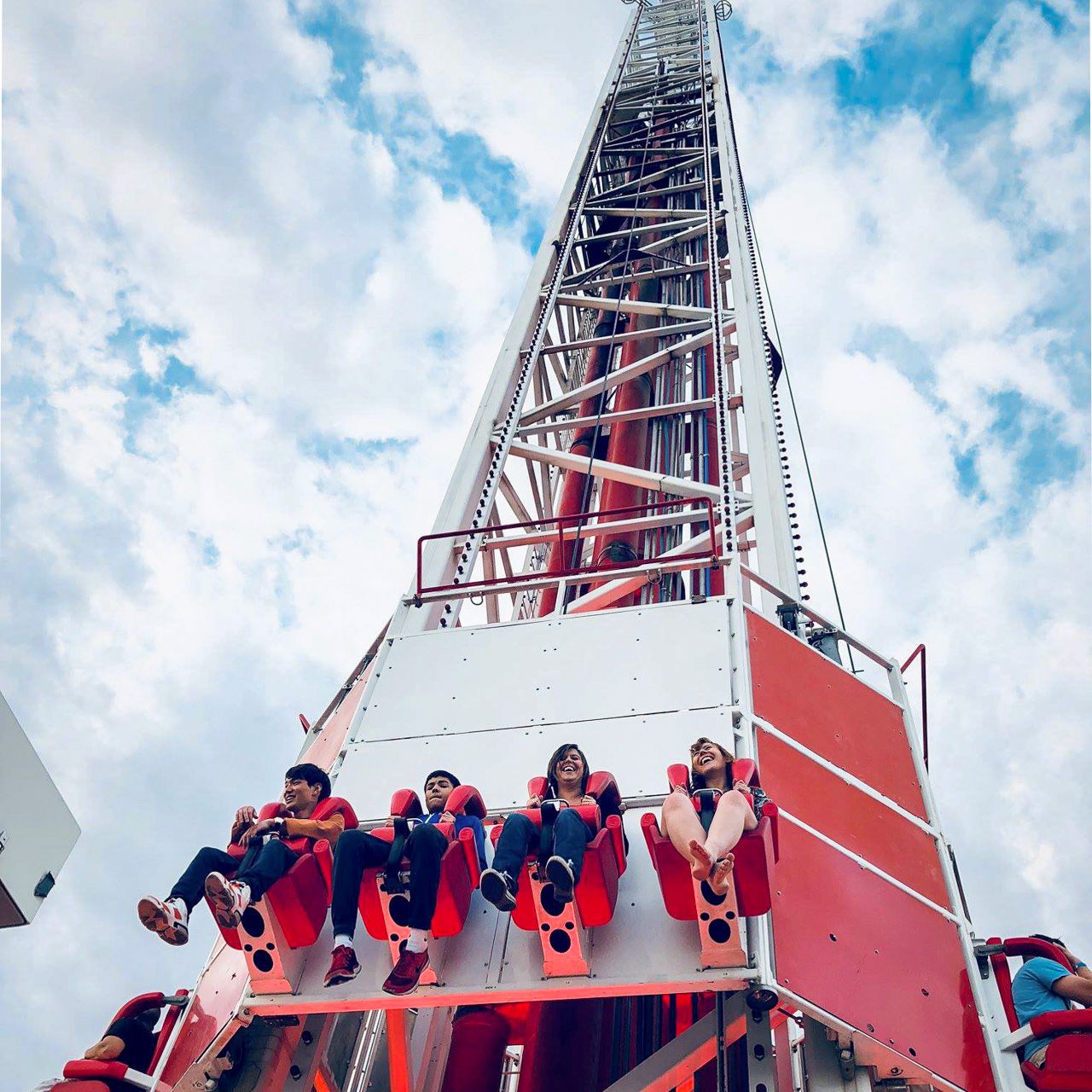 The fun at The STRAT continues with this adrenaline ride atop the building, which catapults riders into the air along the tower’s needle. In the moment, you’ll feel like you’re about to get shot right off the tip of the needle. If you can stop screaming for a few seconds, though, you’ll be able to enjoy one of the best views of the Strip. You’ll bounce up and down the mast three times before descending slowly to the base, at which point you’ll breathe a much-deserved sigh of relief. The Big Shot costs $29 for one ride and $43 for an unlimited pass. It’s open Monday through Thursday from 2 PM to 10 PM and Friday through Sunday from noon to midnight. 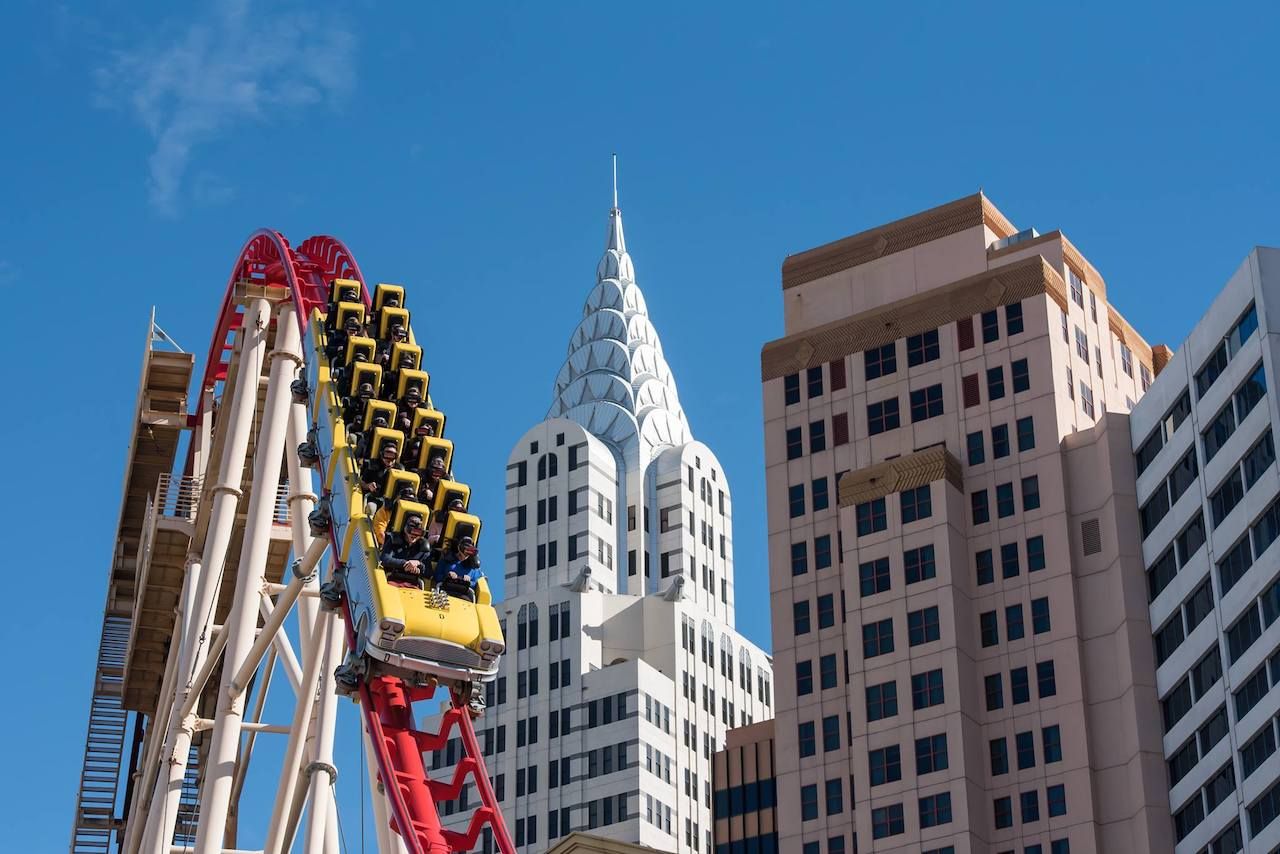 The Big Apple Coaster, located at the New York-New York Hotel, might be more thrilling than anything you can do in the actual Big Apple. This roller coaster would be exhilarating without any additional bells and whistles, but what really sets it apart is the virtual reality option. You can choose to upgrade your ride with VR goggles, which adds advanced, immersive graphics to make the entire experience pop. Once you strap on the headset, you will assume the role of a scientist pursuing an escaped alien through the Nevada desert and Vegas skyline. Coaster tickets are $15; the virtual reality experience is $20. 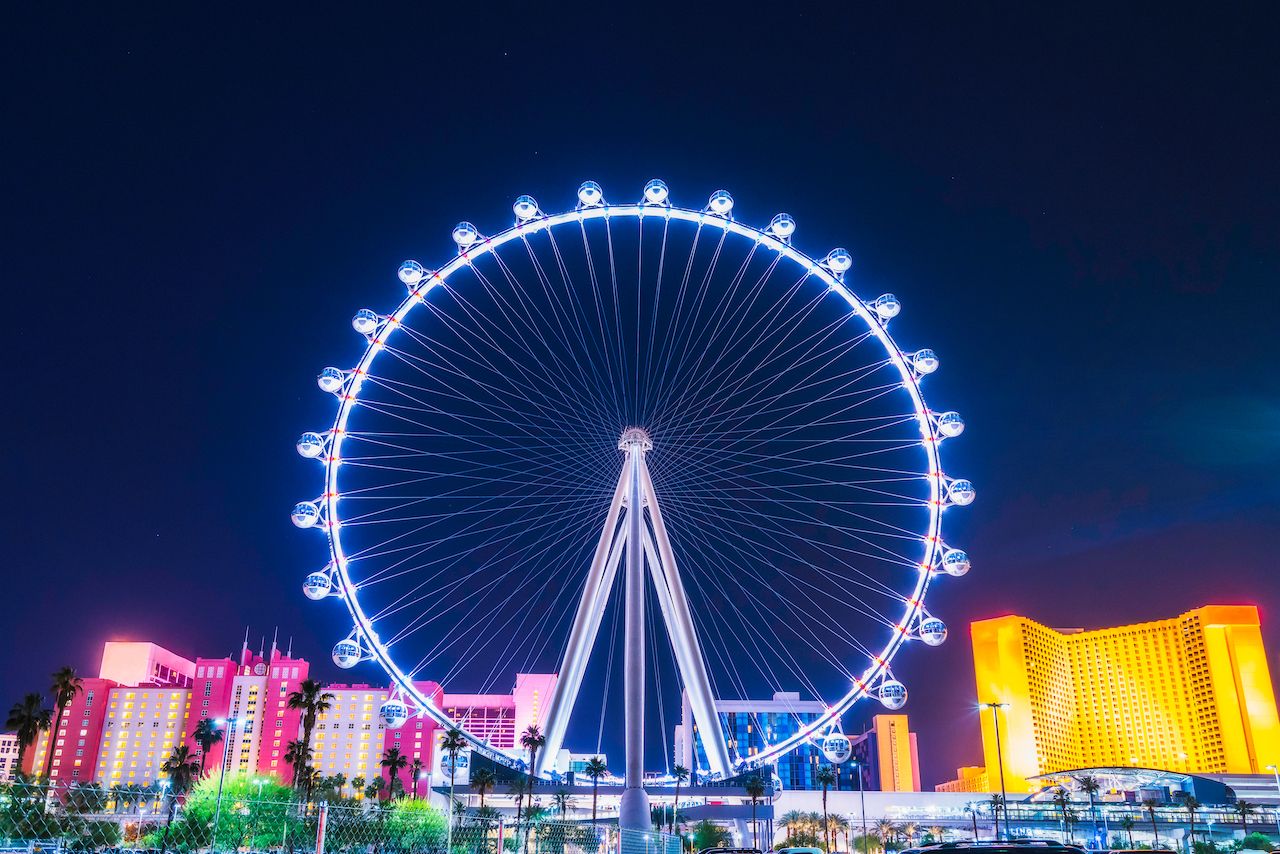 At 550 feet high (11 stories), the High Roller is the tallest Ferris wheel in the world. Even if you consider Ferris wheels to be rather tame compared to dropping 855 feet toward the ground, the sheer height of the High Roller is enough to make it thrilling. Located on the premises of the LINQ Hotel, it’s the perfect way to get 360-degree views of the Strip without putting yourself through heart-stopping anxiety. It takes around 30 minutes for the wheel to complete one rotation, and the cabins are fairly spacious — so it’ll be pretty easy to convince even your most cautious friends or family members to go for a spin. Adult tickets are $22 during the day and $32 at night. 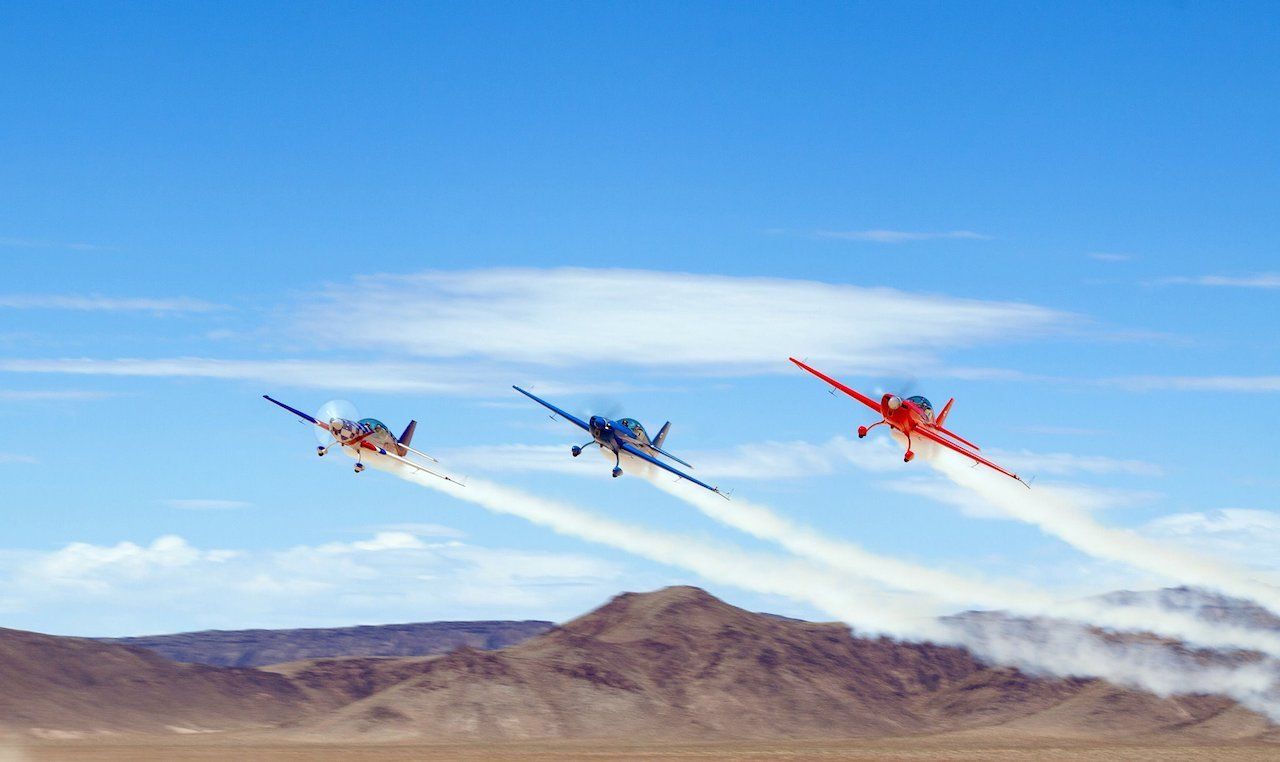 Perhaps the most adrenaline-pumping experience you can have in Las Vegas actually isn’t on the Strip at all. At Sky Combat Ace, about 20 minutes north of the Strip, you will have the opportunity to fly your own aerobatic plane alongside trained pilots. The experience is designed for total beginners, which may sound absolutely insane, but it’s also good news for anyone who has always dreamed of starring in Top Gun. Professional pilots will train you in everything you need to know to fly the plane, and will sit beside you the entire time making sure you don’t get yourself killed. You’ll attempt stunts, spins, drops, and even simulated military campaigns. A wide range of packages are available online, so you can choose whatever experience fits you best. 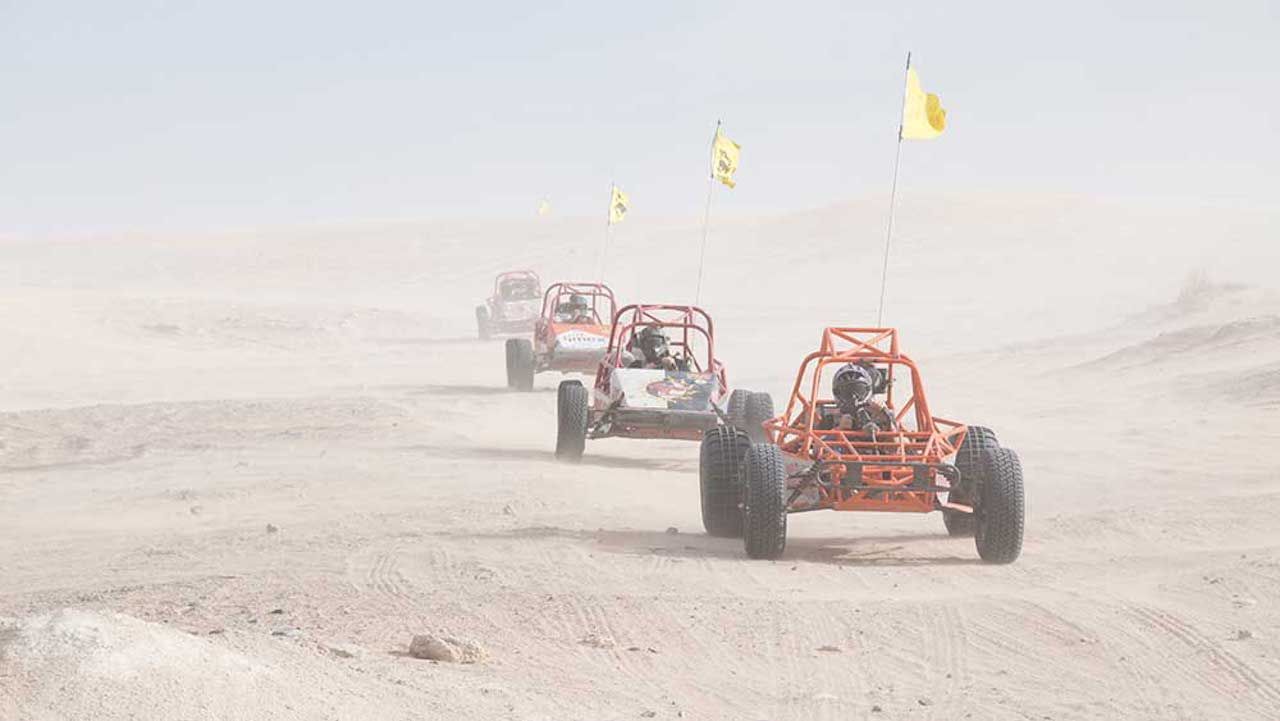 Going all the way to Vegas and not having an epic desert experience would be a waste of time. The Vegas Mini Baja Chase gives you the opportunity to spend a day on custom-built dune buggies over the Nellis Dunes, about 20 minutes northeast of the Strip. After an orientation, you will embark upon a buggy journey over some rugged terrain, including steep hills, sand dunes, gravel, and hard-packed dirt. You’ll be following a guide, but this will feel unlike any tour you’ve ever been on — by the end, you will have raced across 15,000 acres of desert landscape. The experience includes transportation to and from your hotel, and you have the option of booking a one-seat, two-seat, four-seat, or six-seat buggy. Prices start at $80 per person, and tours can be booked online. 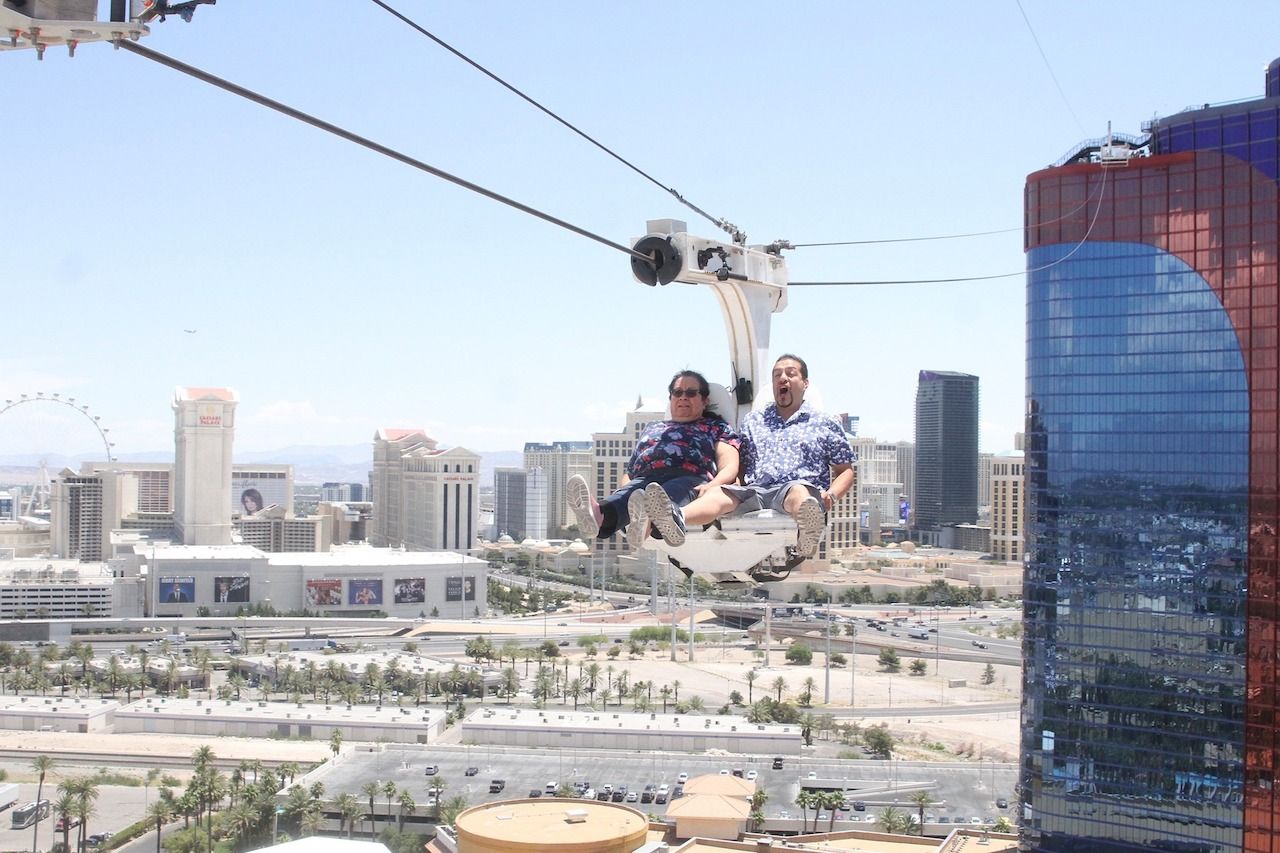 If you’d rather fly above Las Vegas than toward its pavement, the Rio Zipline, also known as the Voodoo Zipline, is the tallest and fastest zip line in Vegas. You and a partner can sit side by side and zoom through the air at 33 mph between the two towers at the Rio All-Suite Hotel and Casino. To reach the starting point, you will take an initial 800-foot zipline ride facing backward. Then, once you’ve arrived at the Rio Zipline Lounge atop the Rio’s Masquerade tower, you will cruise at an altitude of 490-feet in the air for about 70 seconds (though it will probably feel like much longer). You can ride during the day or at night. Tickets are just $25 per person and can be booked online.

A version of this article was previously published on July 17, 2019, and was updated on October 28, 2020, with more information.