Route 66 is one of the most iconic and widely recognized roads in America. It’s often considered the quintessential American road trip, and it conjures romantic images of dusty desert highways, vintage roadside attractions, and scenery both stunning and diverse. Route 66 holds such a place in America’s heart that it’s sometimes called Main Street of America and Mother Road.

Yet when you imagine Route 66, you’re probably not thinking of the Texas panhandle. The northernmost region of Texas is usually treated like the road trip equivalent of a flyover state. Still, there are plenty of scenic landscapes and quirky attractions to make it worth a stop on your Route 66 adventure. 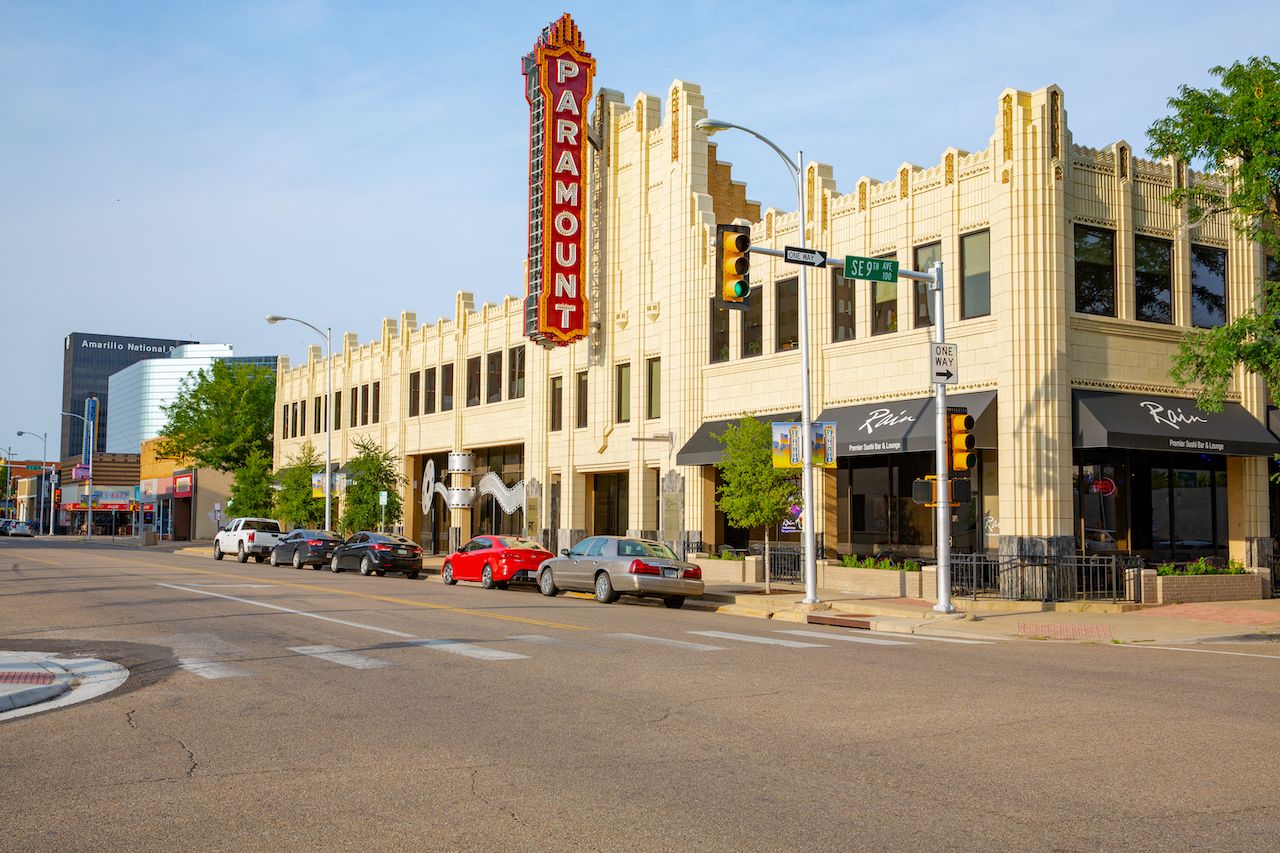 At first glance, the panhandle might seem like a vast, largely undeveloped plain. Until that is, Amarillo rises like a mirage out of the Texas heat. This city of nearly 200,000 is your best bet for city entertainment on this stretch of Route 66. It’s got the Wonderland Amusement Park with water rides, roller coasters, and Ferris wheels. It‘s also home to exceptional museums like the Kwahadi Museum of the American Indian, which exhibits crafts and cultural artifacts of Pueblo and Plains Indians. The Sixth Street Historic District is a great way to get the classic Amarillo feel. This throwback neighborhood is filled with historic buildings, traditional street signs, art galleries, and antique shops. 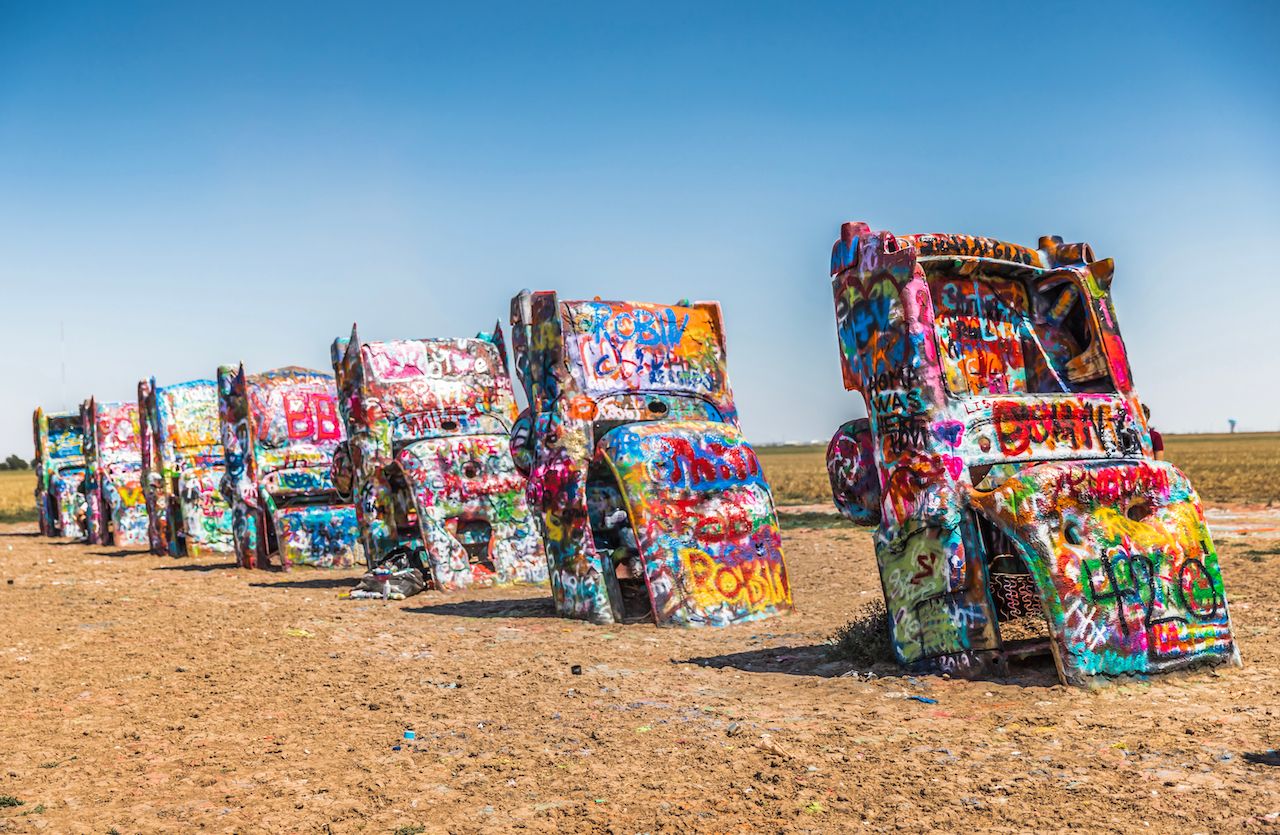 Cadillac Ranch is one of the Texas Panhandle’s most famous drive-by attractions. Also referred to as “Carhenge,” it sits just 12 miles west of downtown Amarillo and consists of 10 Cadillacs pointing vertically into the air. Each one is painted with colorful graffiti, and visitors often add their own artistic touch. The landmark was created by the Ant Farm, a California-based group of artists, who originally built it along Route 66. Due to urban expansion, it moved to its current location in 1997. 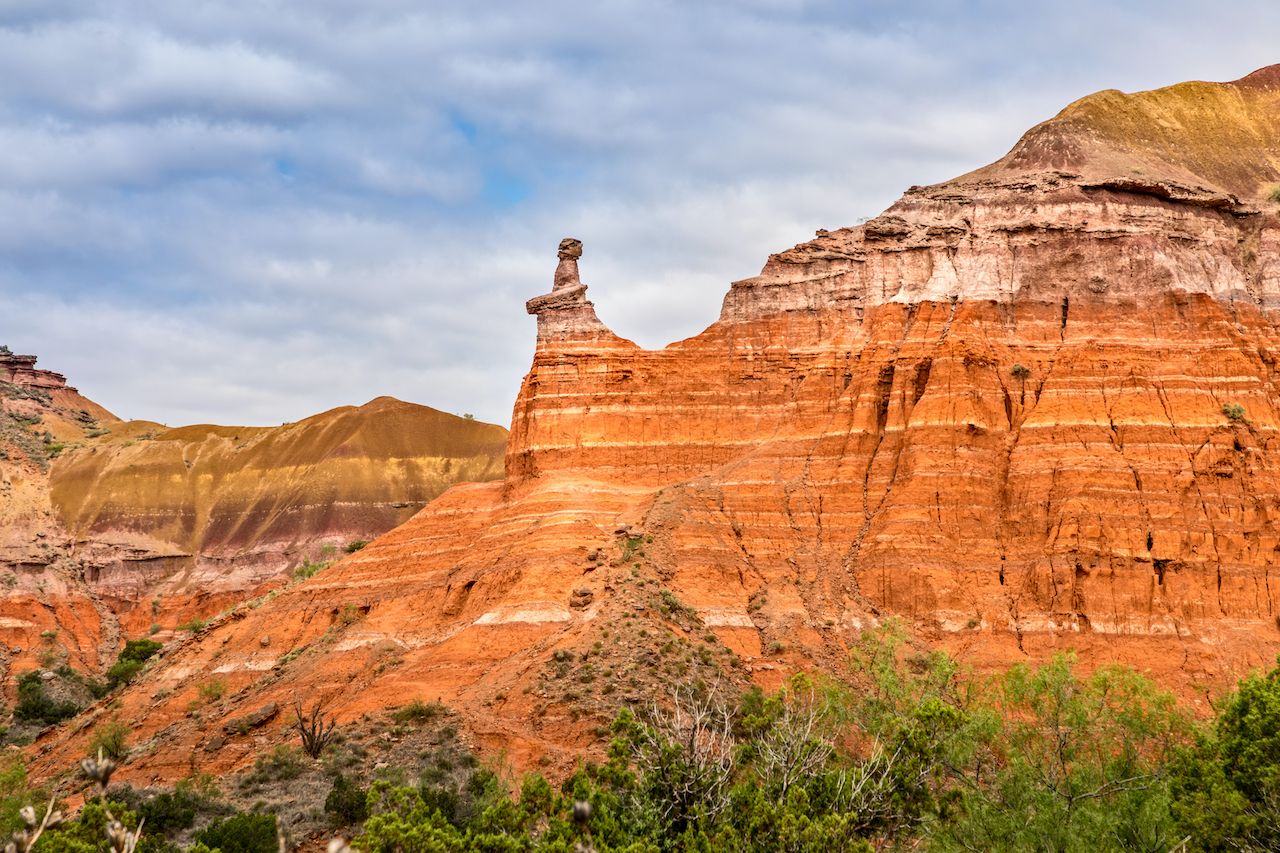 Just south of Amarillo, you’ll find what’s called the “Grand Canyon of Texas.” Don’t expect to ride mules down to the base or take an epic helicopter tour, because there are no mules and, well, it’s just not that kind of canyon. Palo Duro Canyon is 800 feet deep, 120 miles long, and up to 20 miles wide in some areas. It’s a popular area for hiking, camping, mountain biking, and horseback riding. The six-mile round-trip Lighthouse Trail is one of the most popular hikes, leading to a rock shaped like a lighthouse. Of course, if you’re not in the mood for exercising, you could always take the 16-mile round-trip drive from the canyon rim to the canyon floor and enjoy the geography from the comfort of your car. 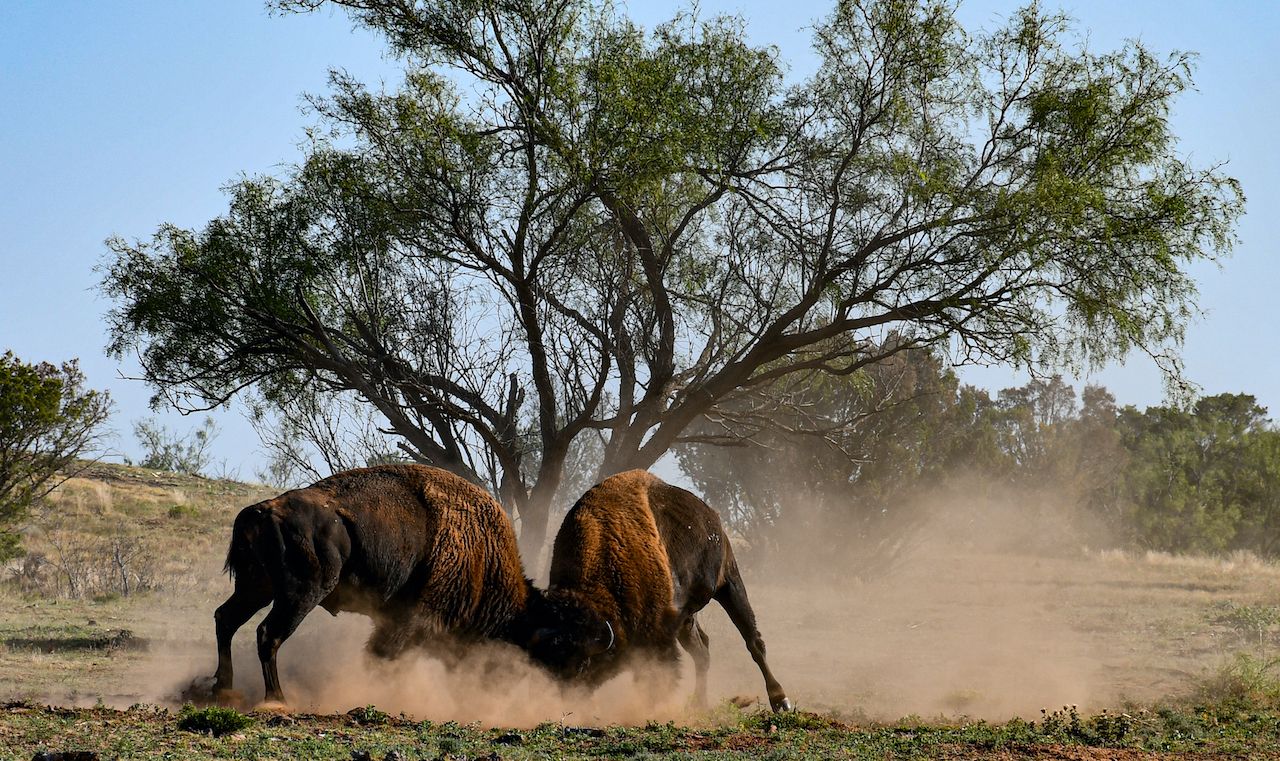 You won’t find much to do in the small town of Quitaque, which has fewer than 500 residents, but just north of town lies Caprock Canyons State Park — a must-see. Outdoor enthusiasts will find this quick pit stop easily turns into a daylong excursion. Known for its wildlife viewing, outdoor recreation, and spring-flower blooms, Caprock Canyons State Park has 90 miles of trails for hiking and biking, an abundance of campsites, and even swimming, fishing, and boating on Lake Theo. The wildlife here isn’t your typical elk and bird — the park is home to wandering herds of bison and Mexican free-tailed bats flying around Clarity Tunnel. 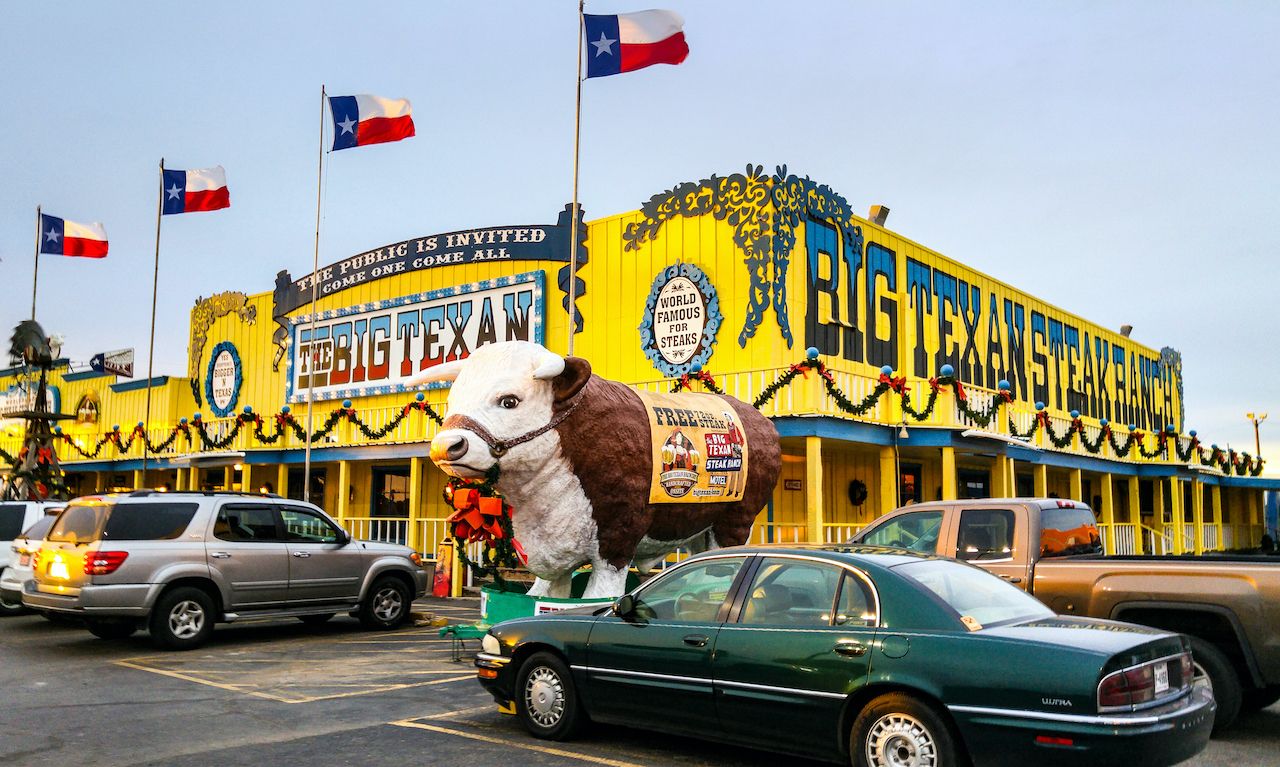 Nothing says Texas like the slogan “Home of the 72-oz Steak.” If you do nothing else in the state except consume a large steak, you can genuinely say you’ve “been” to Texas, rather than simply “passed through.” The Big Texan Steak Ranch is more than just a restaurant — it’s a saloon, shooting arcade, motel, brewery, and RV stop rolled into one. The epitome of a classic Route 66 attraction, the ranch opened in Amarillo in 1971, is marked by its iconic cowboy sign and massive steer mascot. However, the place is most famous for its steak challenge — you have one hour to eat a 72-oz steak (plus sides), and as a reward, you’ll get the $72 meal for free. Less than 10 percent pass the challenge, so plan accordingly. 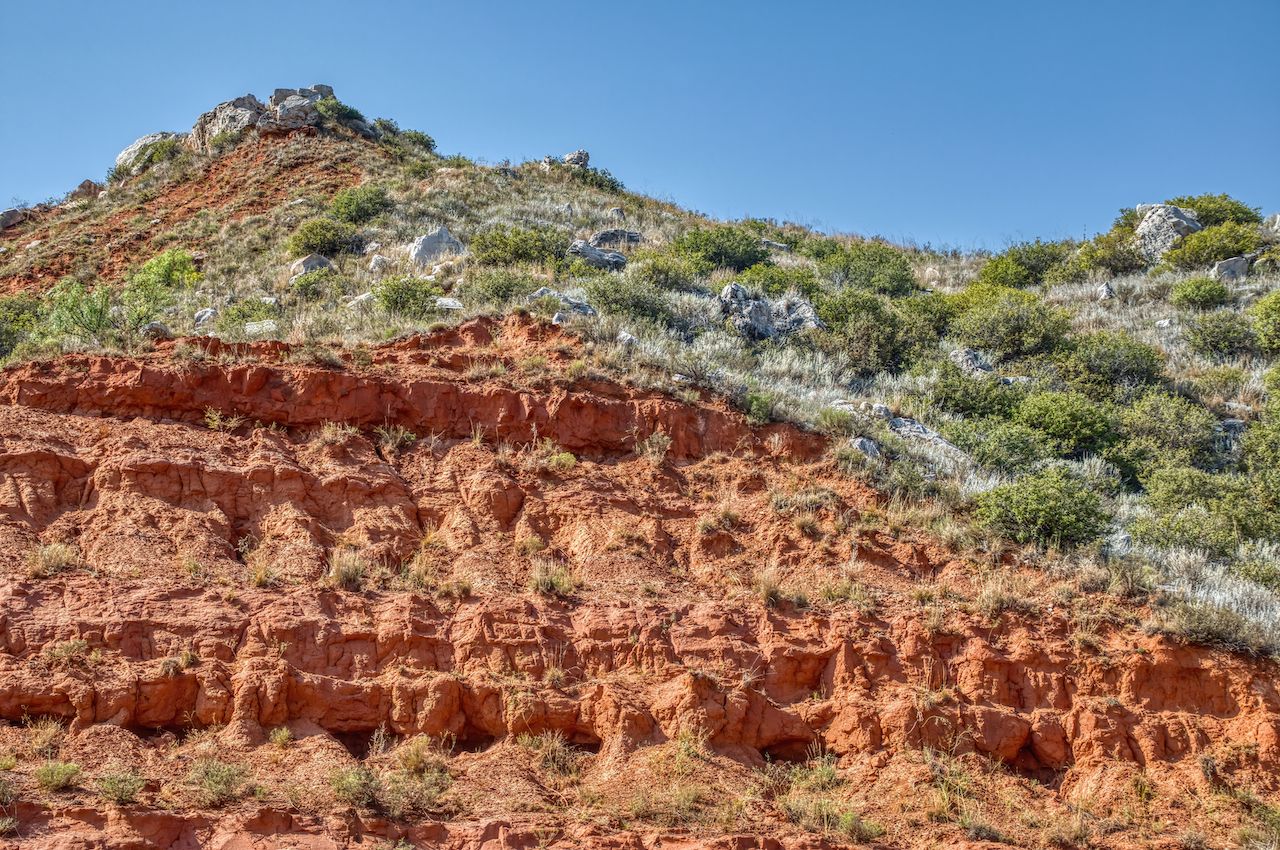 Steak isn’t the only thing that’s bigger in Texas. History has a pretty heavy presence in the panhandle, with some sites containing rocks and carvings dating back thousands of years. At the Alibates Flint Quarries National Monument, just north of Amarillo, visitors can take guided tours of the area. You’ll learn about the Indigenous people who lived on the Texas Plains and used the area’s Alibates Flint to make their tools for over 13,000 years. You’ll also spot ancient rock carvings (called petroglyphs) in many places throughout the park. Most notably, you can find them at the Antelope Creek Village site, where the Antelope Creek people made carvings around 1500 AD.

11 Fredericksburg Airbnbs To Experience the Best of Texas Hill Country