For the indigenous people who live near the massive Columbia River in Washington state, salmon sustained life, formed the basis of trade, and served as one of the most important figures in their spiritual practice. So important is this fish to their way of life that these tribes still collectively call themselves the “Salmon people.”

Today, sport salmon fishing remains one of the most popular outdoors activities in Washington, perhaps because it’s so versatile and open to people of all ages and levels of experience. And Washington tribal communities are still at the forefront of salmon fishing – many of the best rivers for salmon fishing in Washington are on tribal lands and the tribes run hatcheries that have revived once endangered salmon species.

You can go salmon fishing from the beach, charter a guided fishing expedition, fish on the open water (experienced anglers only), or boat down one of Washington’s many pristine rivers for spawning salmon. Bring the kids too – this is a family activity.

Chinook salmon and coho salmon are the most popular salmon among sport fishers, but there are a few rules to follow before you grab your tackle box. Peak season for salmon fishing is typically May through September – though it sometimes extends into December – and anglers do not have free reign once they get on the water.

The salmon fishing rivers and other bodies of water in Washington are split into marine areas that have catch quotas. Once the quota is met in a certain marine area, it shuts down for the season. You can brush up on fishing regulations and get your fishing license through the Washington Department of Fish and Wildlife. Anglers are also encouraged to catch and release wild salmon.

Once you’ve acquired the necessary equipment and brushed the cobwebs off your kids’ life jackets, you just need to decide where you want to go. The rivers of Washington are lush, teeming with life and greenery, and are truly idyllic places to spend your summer – plus they offer a bevy of other activities from white water rafting to camping on the beach.

These are the eight best rivers in Washington for salmon fishing. 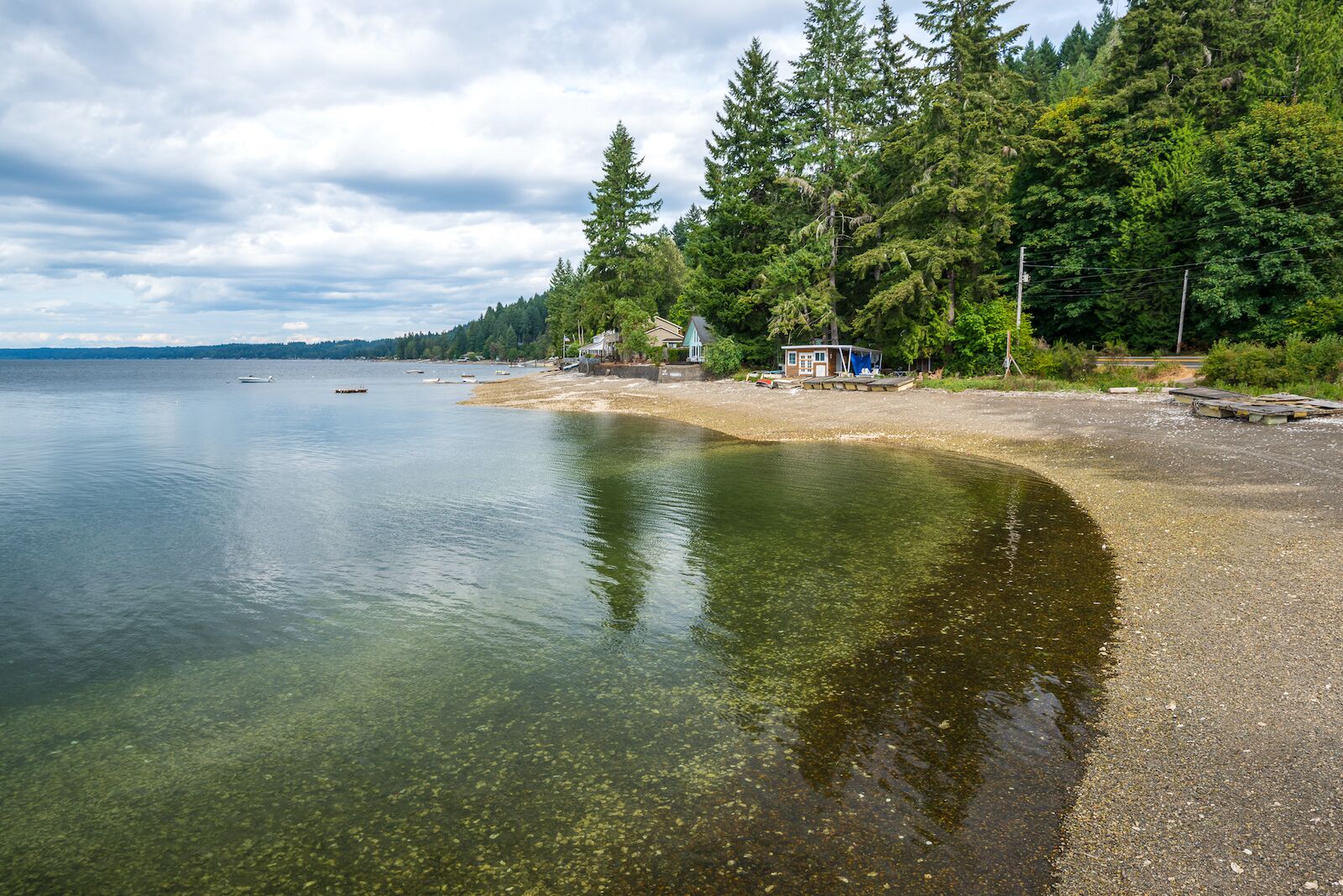 Head to the Skokomish River in Hood Canal for what some experienced anglers might call an underappreciated region for salmon fishing in Washington. Either a two hour drive or an hour long ferry ride from Seattle, Hood Canal offers bountiful runs of Chinook salmon in July and August. There are 12 official regions in Hood Canal where fishing is allowed. That might make it sound like there is plenty of open space, but the Skokomish River tends to get crowded during salmon fishing season. Belfair State Park is one of the most popular places for fly fishing for coho salmon. 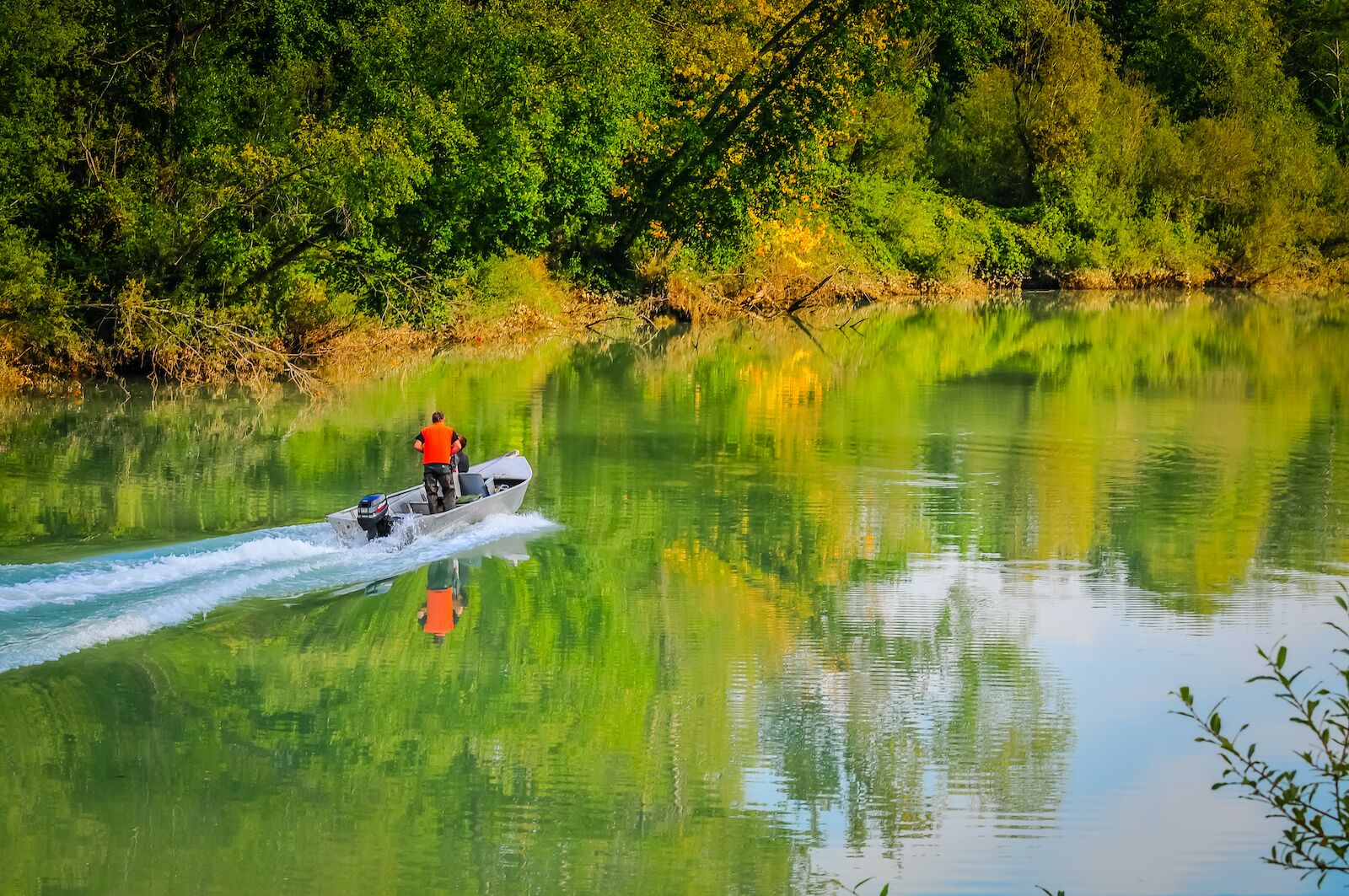 Situated between Tacoma and Olympia and about an hour away from Seattle, some experts think the Nisqually River is the best place for beginners to sharpen their salmon fishing skills. The Nisqually Indian Tribe runs a hatchery program that’s responsible for revitalizing the Chinook and coho salmon in this river, and anglers flock to this river in the late summer and early fall to wrestle with the monstrous salmon that run these waters. 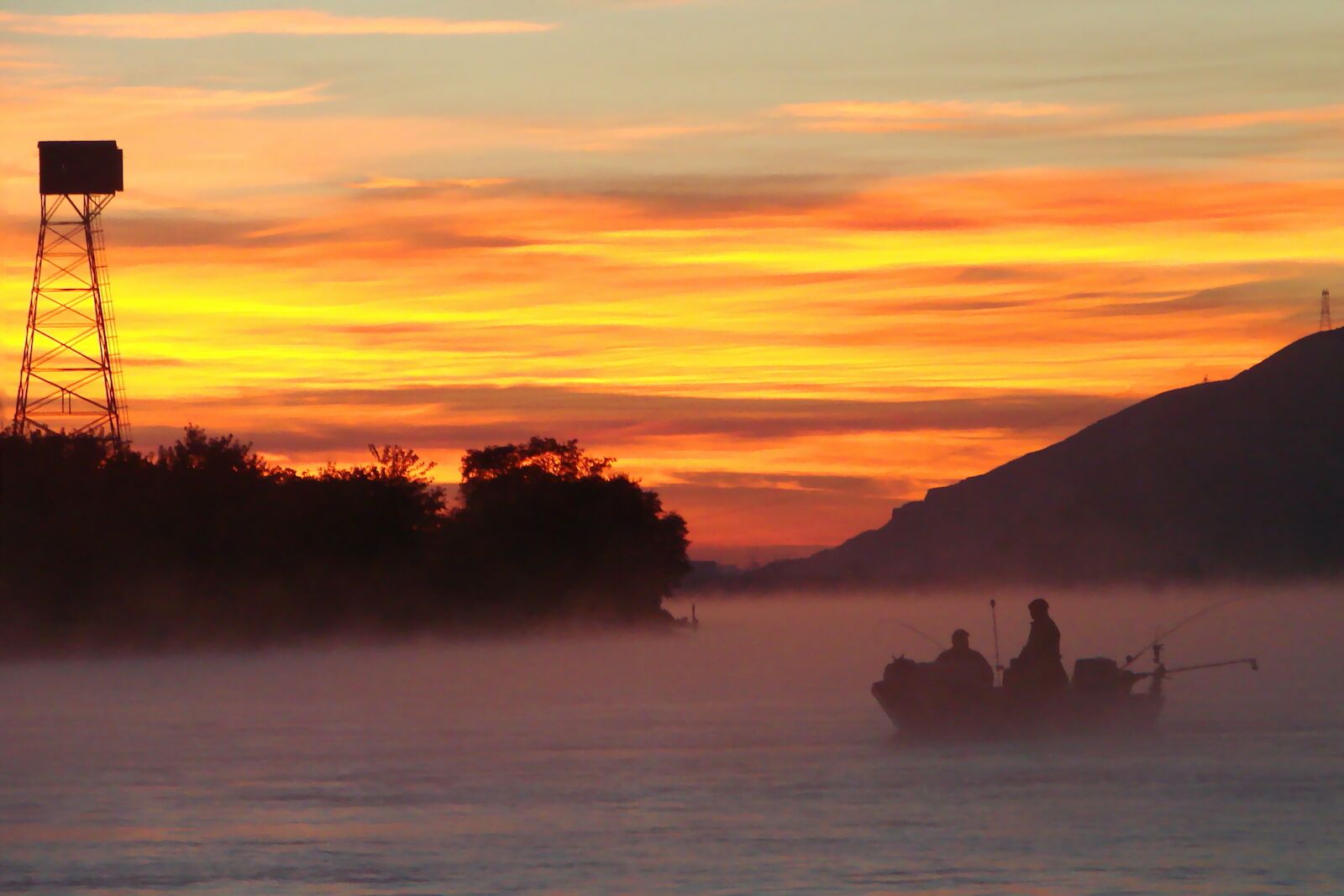 The  massive Columbia River is 1,243 miles long, and extends into parts of Canada and Oregon. For salmon fishing in Washington, several of its tributaries are legendary destinations – in particular the Cowlitz and Kalama. At the Kalama you’ll find Spring Chinook, so the best time to go is in April, May, and June. The Cowlitz, on the other hand, hosts salmon two times a year: Spring Chinook from April to May, and fall salmon return from September to November. 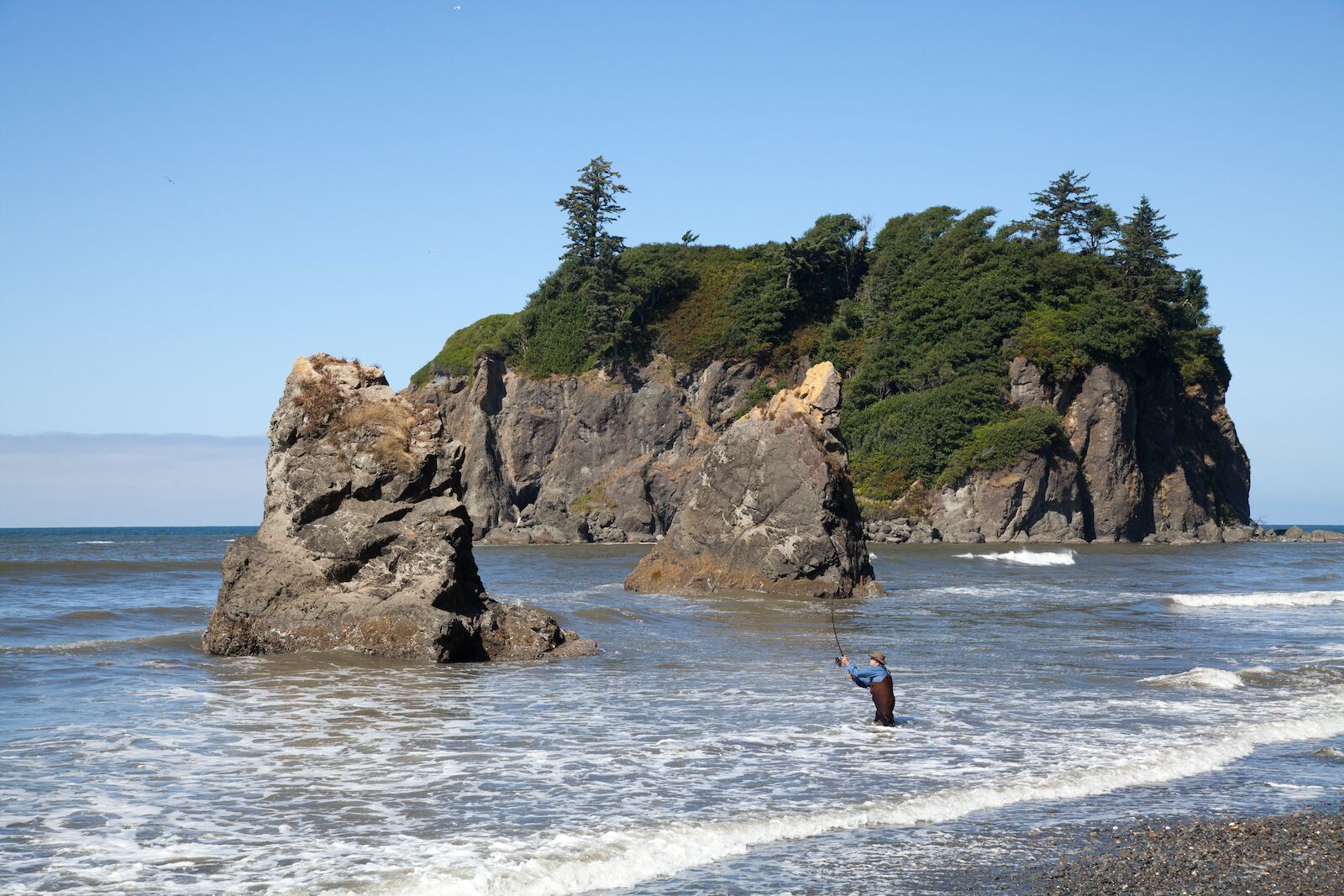 Spring, summer, and fall Chinook and coho are all accessible from La Push, also known as Marine Area 3. This is open ocean salmon fishing, so it’s only accessible by boat and only experienced anglers gather here. There’s also salmon fishing to be found at the Quillayute River, which opens up into the Pacific Ocean at La Push. Its three main tributaries, The Sol Duc, the Calawah, and the Bogacheil, are busy destinations for salmon anglers (salmon pass through the short six-mile Quillayute before arriving at one of these tributaries where they were born). Here, you’ll find coho and chum salmon, as well as spring and fall Chinook. 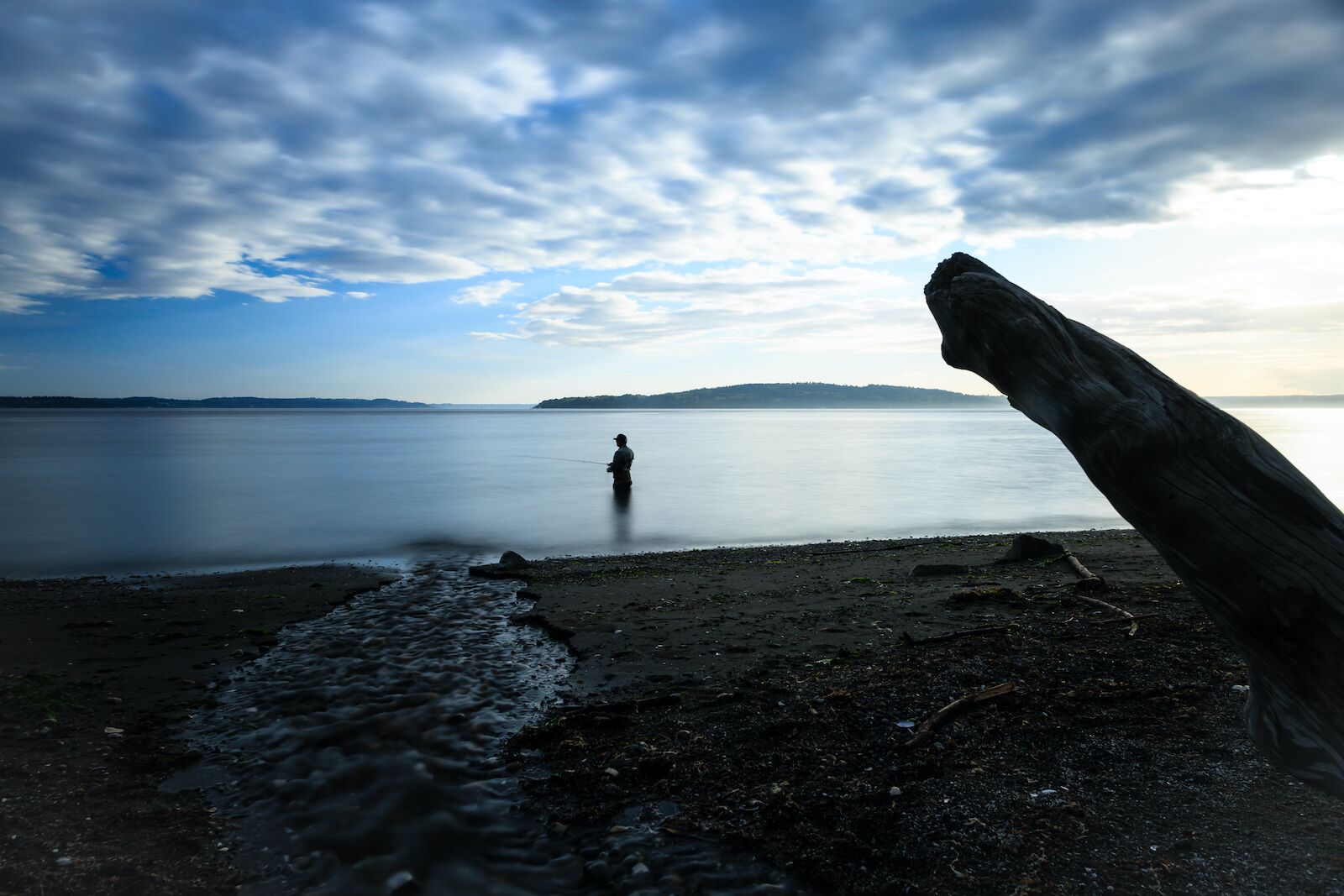 Offering one of the most abundant coho salmon fisheries in Washington state, Puget Sound is a vast body of water with many options for fishing. For salmon, peak season is from August and September. Experts recommended heading to Central Puget Sound, near Shoreline, Edmonds, and Whidbey Island for the best coho salmon fishing. However, it’s also possible to fish for coho from the beach, and during late summer and early fall, interested anglers can set up a bob and bait at almost any public beach in Puget Sound. 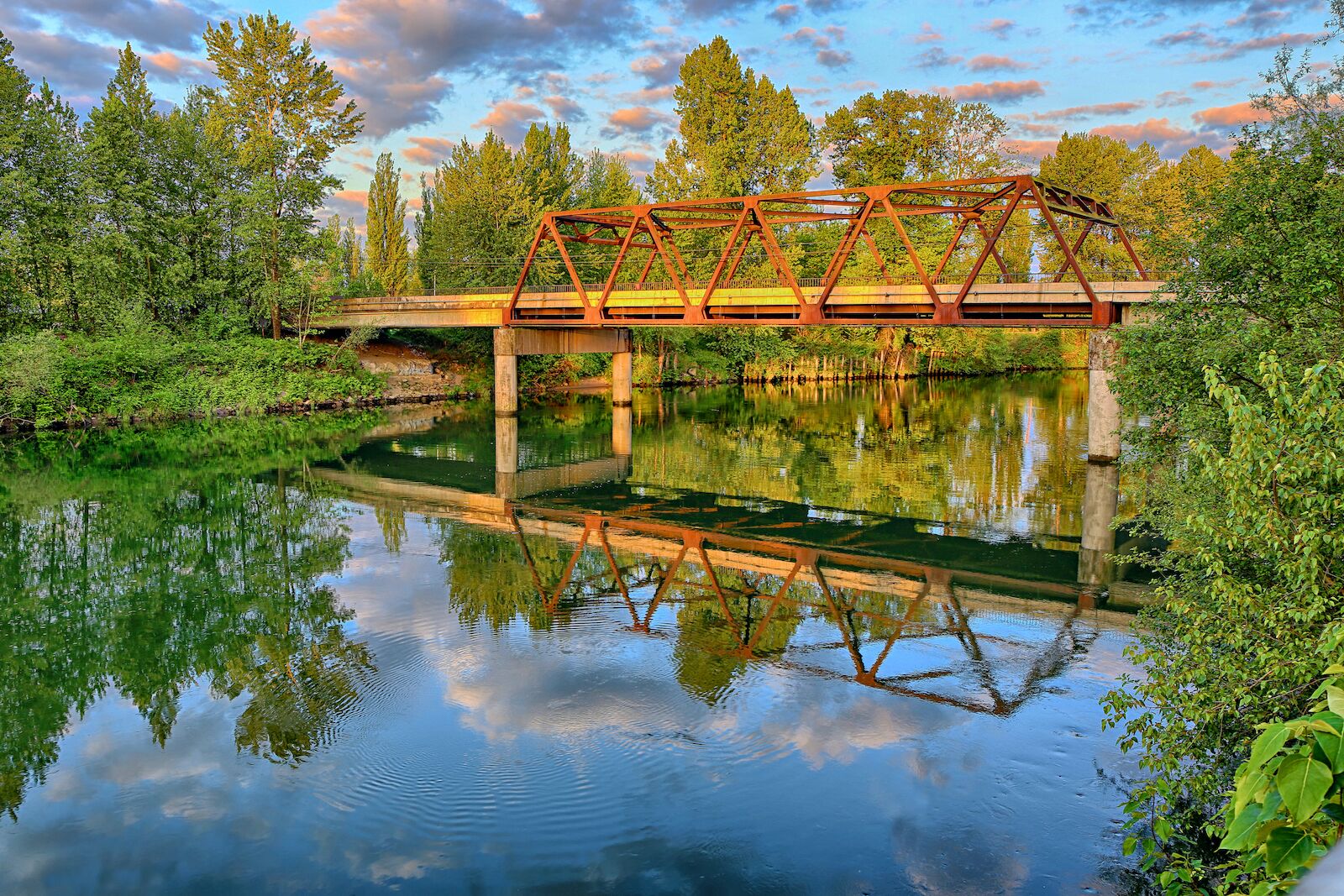 Just a short 45 minute drive from Seattle, the Snohomish River sees runs of coho, pink, chum, and Chinook salmon. The latest concentration of fish arrives in September and October, and around this time, the busy Snohomish will be dotted with boats looking for their catch. The pink salmon are especially abundant in the Snohomish River but they only return in large numbers during odd numbered years. Experts recommend taking a smaller boat at the lower end of the Snohomish River for the best salmon fishing. 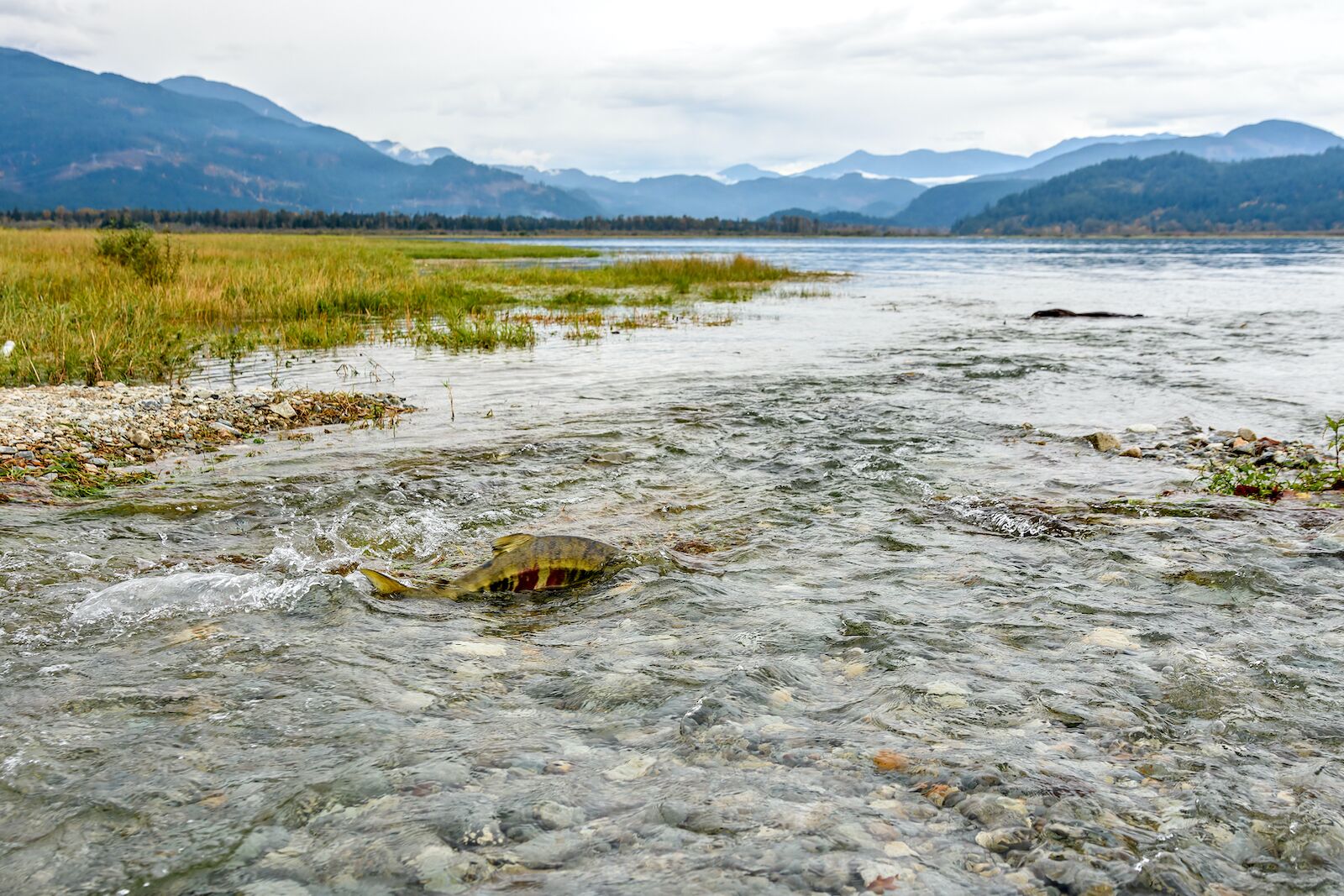 Expert anglers agree that the Chehalis River, near Grays Harbor about a two hour drive from Seattle, is a great salmon fishing location. You’ll find chum, coho, and Chinook salmon here from September to December — later in the season than in other places in Washington. Your best bet is to head downriver if you want to catch coho. 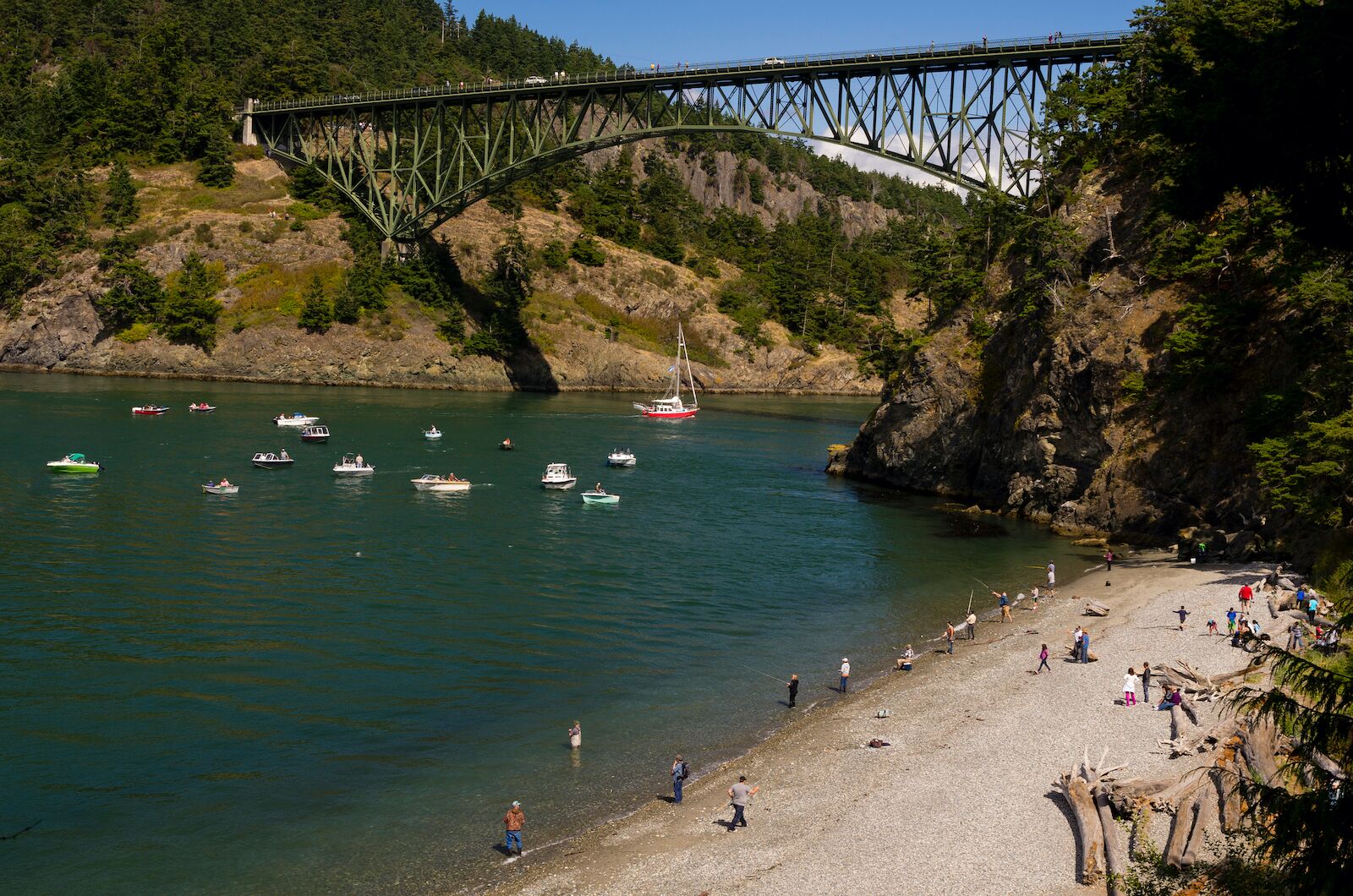