The COVID-19 pandemic completely upended live performances. Theaters throughout the country went dark for upwards of a year or more, and many are still in the process of reopening their stages. In Las Vegas, shows have been slowly returning, with many long-time, as well as brand-new, favorites now back in full force, and many more planning their triumphant returns in the coming months. Thankfully Vegas is still very much Vegas, and there are still a lot of fantastic shows for visitors to enjoy. Book your Vegas Airbnb now — and get ready to head to Sin City. These are the best shows in Las Vegas in 2021-2022, with a little something for all tastes and ages. 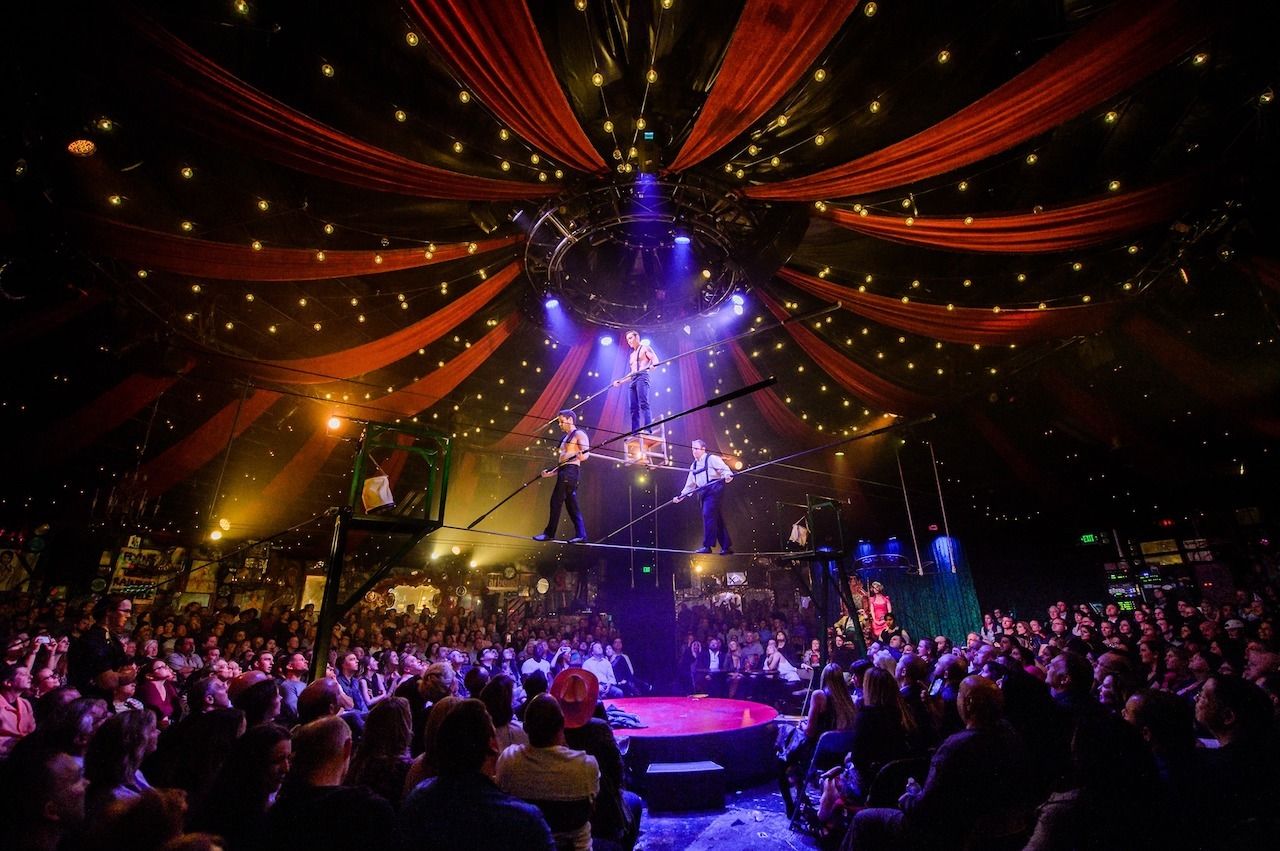 Hands-down the best show on the Strip, Absinthe is a modern-day vaudeville/variety show that is as thrilling as it is risqué. It takes place in a big top in front of Caesars Palace, but it is definitely not for kids! Hosted by the sleazy Gazillionaire and his ribald sidekick Penny with regular appearances from the Green Fairy, Absinthe — one of the very first Las Vegas shows to return after the pandemic closures — is once again operating at full steam and full capacity, with performances happening twice nightly (with three shows on Fridays and Saturdays), seven days a week, 365 days a year. With that kind of schedule, not every performer is at every show, which means the lineup is ever-evolving and no matter how many times you see it, it’s never the same show twice.

The fabulous queens of RuPaul’s Drag Race are finally slaying again at the Flamingo after a brief, ill-timed residency that launched in February 2020. Watch them WERK to a whole show of custom choreography and original numbers with outrageous costumes not seen on TV. Catch all the fierceness nightly Thursdays through Mondays. 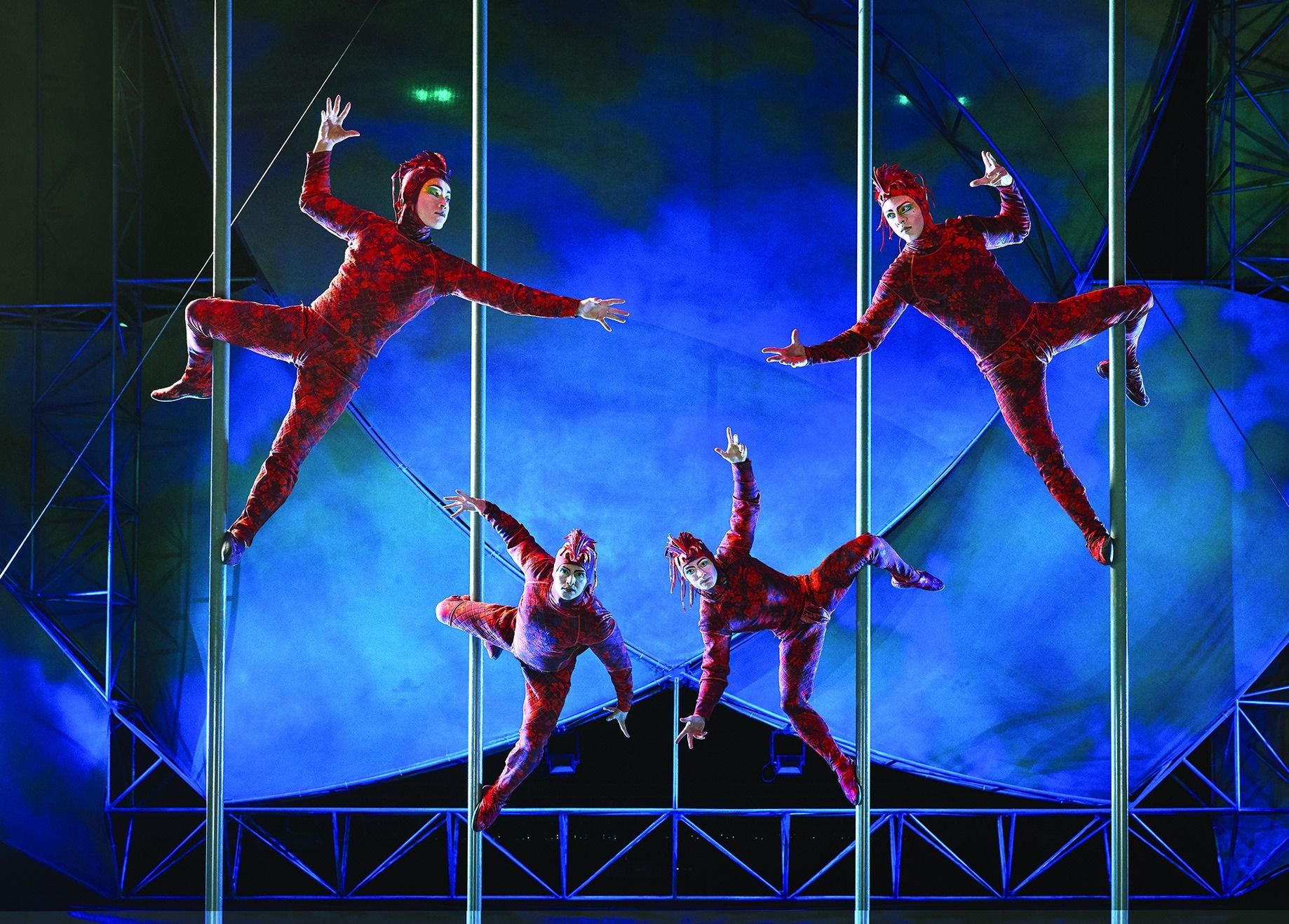 The original Las Vegas resident Cirque show that launched all the others, it seems only fitting that Mystère would be the first Cirque performance to return to the stage. Still in its original home at Treasure Island since 1993, Mystère is Cirque’s longest-running show and was the first to bring their unique mix of circus acts, world music, comedy, and elaborate sets and costumes to the Strip. Catch it Fridays through Tuesdays with two shows nightly.

MINDFREAK isn’t just another Vegas magic show — it’s an over-the-top Vegas production with plenty of pyrotechnics and theatrics (and some super-creepy contortionists). Angel narrates throughout, reflecting back on his career and sharing some personal stories. This production features all of his greatest tricks and illusions, including a straitjacket escape while hanging above the audience, lots of levitation, and motorcycle-conjuring. There are also some horror elements to it (not great for young kids), as well as live musicians that will remind some audience members of Mad Max: Fury Road. Experience Angel’s vision nightly at Planet Hollywood Wednesdays through Sundays. 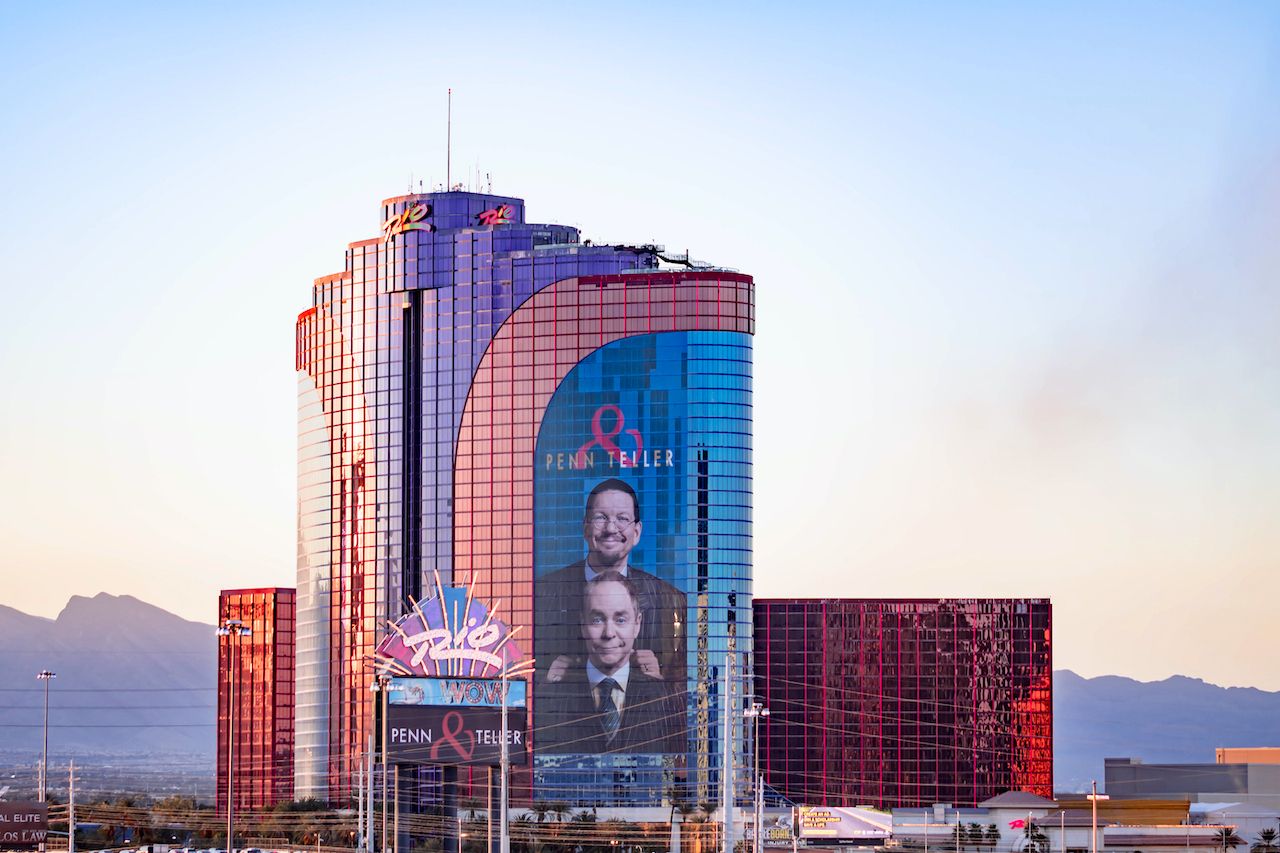 Penn & Teller’s headlining show at the Rio is the longest-running residency in Las Vegas history. This comedy/magic duo have been headliners in Vegas for nearly 30 years and with good reason: equal parts awe-inspiring illusions and sharp-witted humor continue to impress audience members even after multiple viewings. If you see one magic show in Vegas, make it this. See them nightly Thursdays through Sundays. 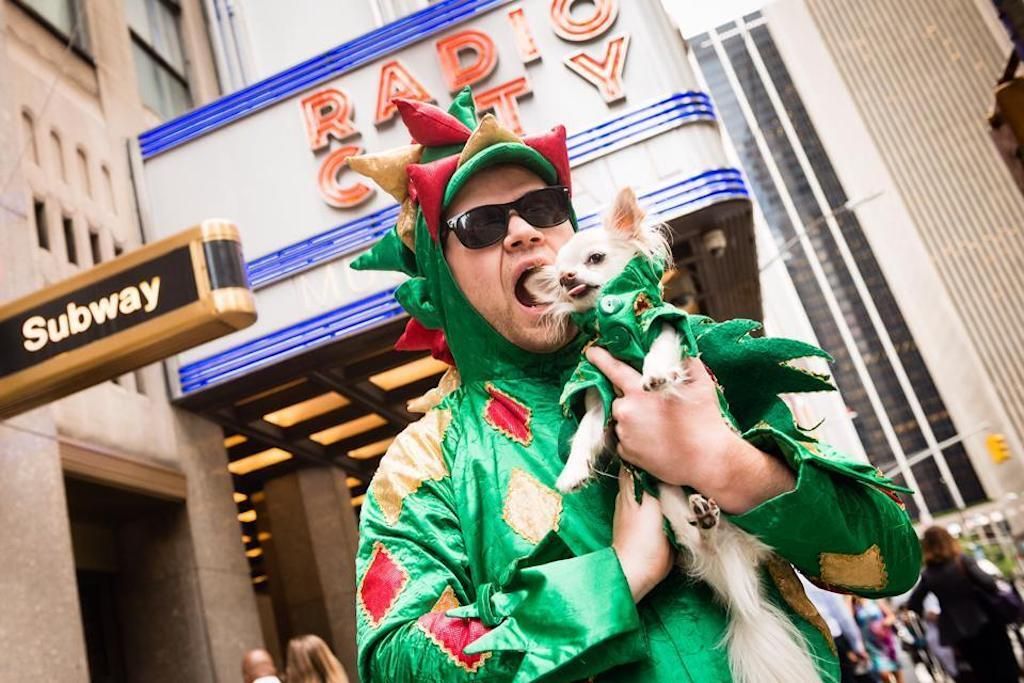 Another magic/comedy act in the vein of Penn & Teller, only instead of a small silent magic-performing human sidekick, Piff has a small silent magic-performing Chihuahua called Mr. Piffles along with the fabulous Jade Simone. Piff the Magic Dragon will have you laughing out loud, and for some extra one-on-one attention with Piff & Co. splurge on Piff’s Pre-Show Party and meet-and-greet before the show. You can see Mr. Piffles and his dragon-costumed human at the Flamingo nightly, Thursdays through Mondays.

The only hip-hop dance crew to have a residency in Vegas, Jabbawockeez bring mind-melding breakdancing, pulsing music, and impressive special effects to a popular Las Vegas show that’s appropriate for all ages. Now located inside the MGM Grand with an all-new show, Timeless, you can catch the performance twice nightly Wednesdays through Mondays. 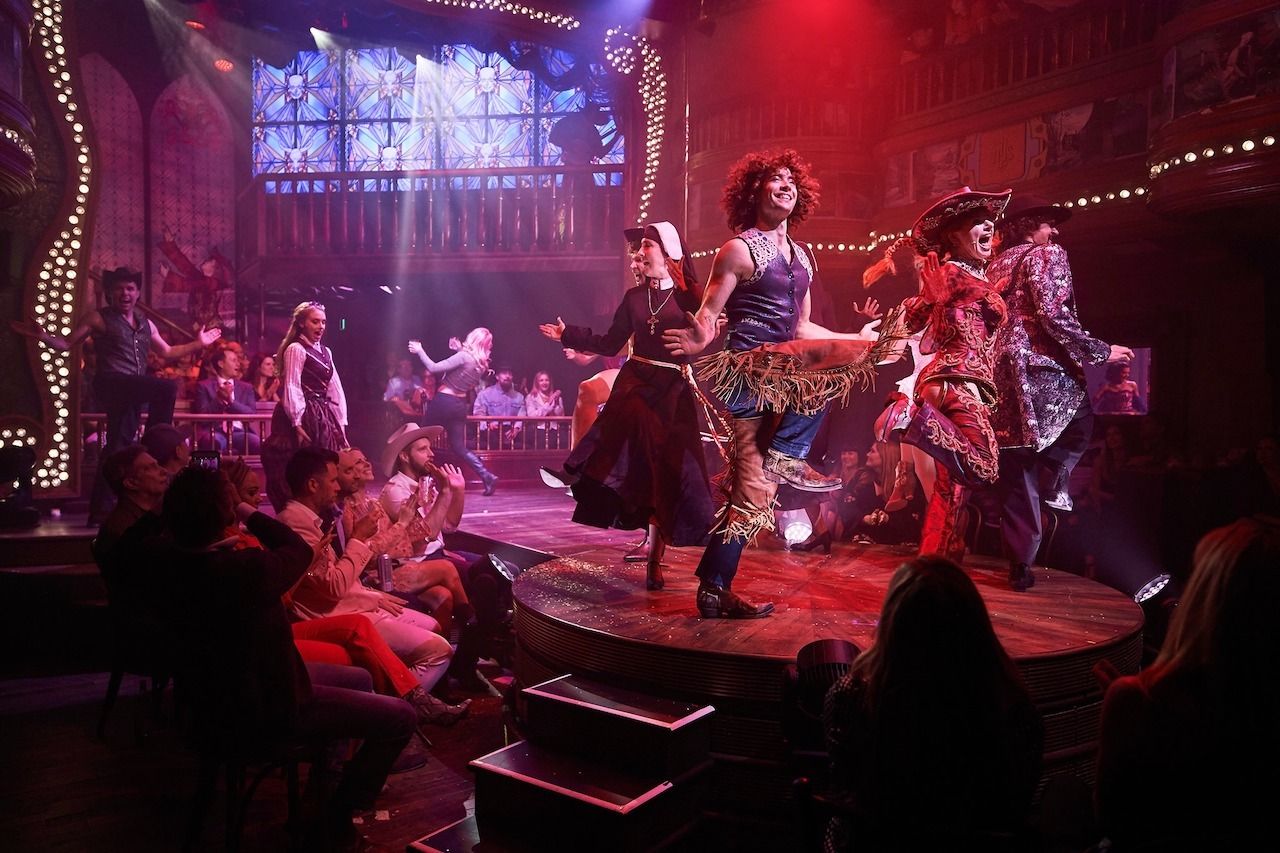 Cirque may be the most popular entertainment company with a heavy presence in Las Vegas, but Spiegelworld is the most notorious. The company that brought us Absinthe over a decade ago, completely transforming Vegas entertainment, now has three utterly deranged shows on the Strip, each managing (against all odds and all limits of good taste) to top the one before it in outlandishness. Atomic Saloon Show at the Venetian is the most recent show, and in terms of stage-setting and story-crafting, it is their best yet. The show takes place during the Wild West inside an Old West saloon/brothel run by Madame Boozy Skunkton, and it is, at its core, a love story. There are rhinestone cowboys and nuns doing things with ping pong balls, and the physical feats on display in this show will have you both cheering and wincing. Giddy-up on over to the Venetian Wednesdays through Sundays with two shows nightly. 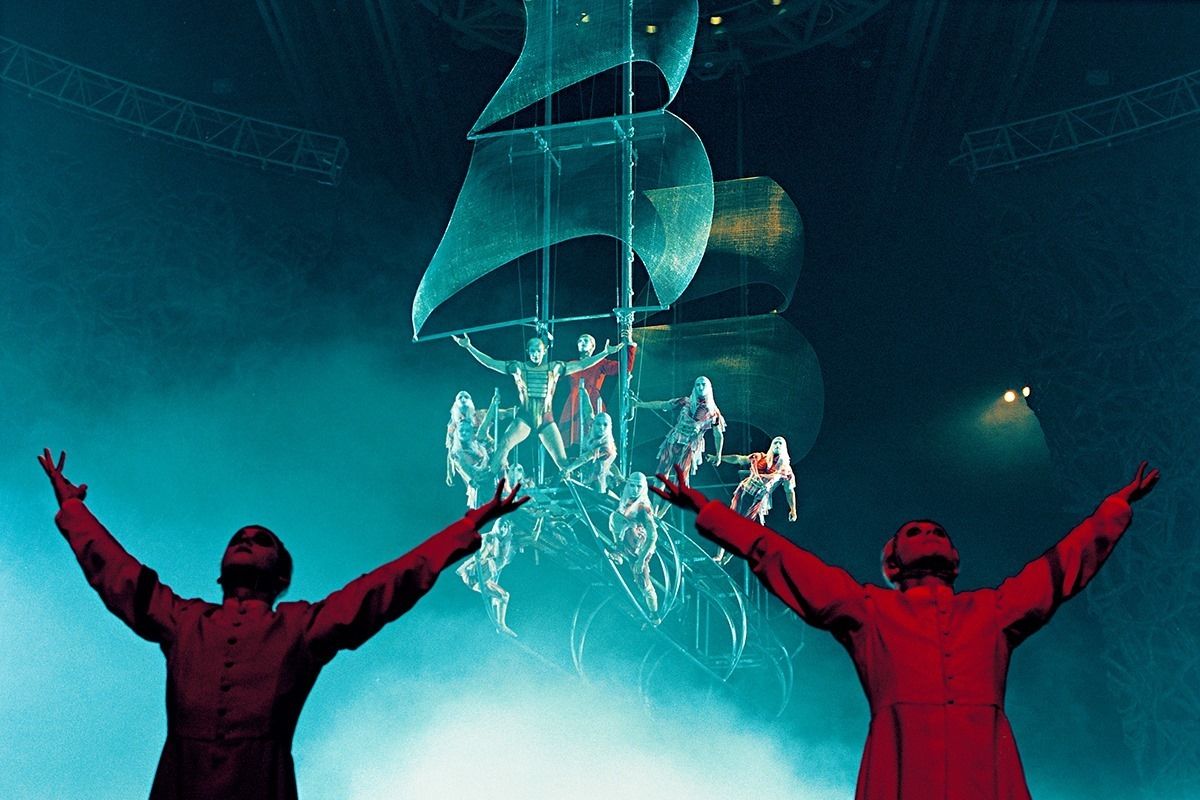 Another long-running Cirque show, the surrealist O at the Bellagio was the first show in Vegas to be staged entirely around a massive pool — this one holds 1.5 million gallons of water — and consist almost exclusively of aquatic-based performances, including divers and synchronized swimmers, in addition to aerialists and other acrobatic performers. O plays twice nightly Wednesdays through Sundays. 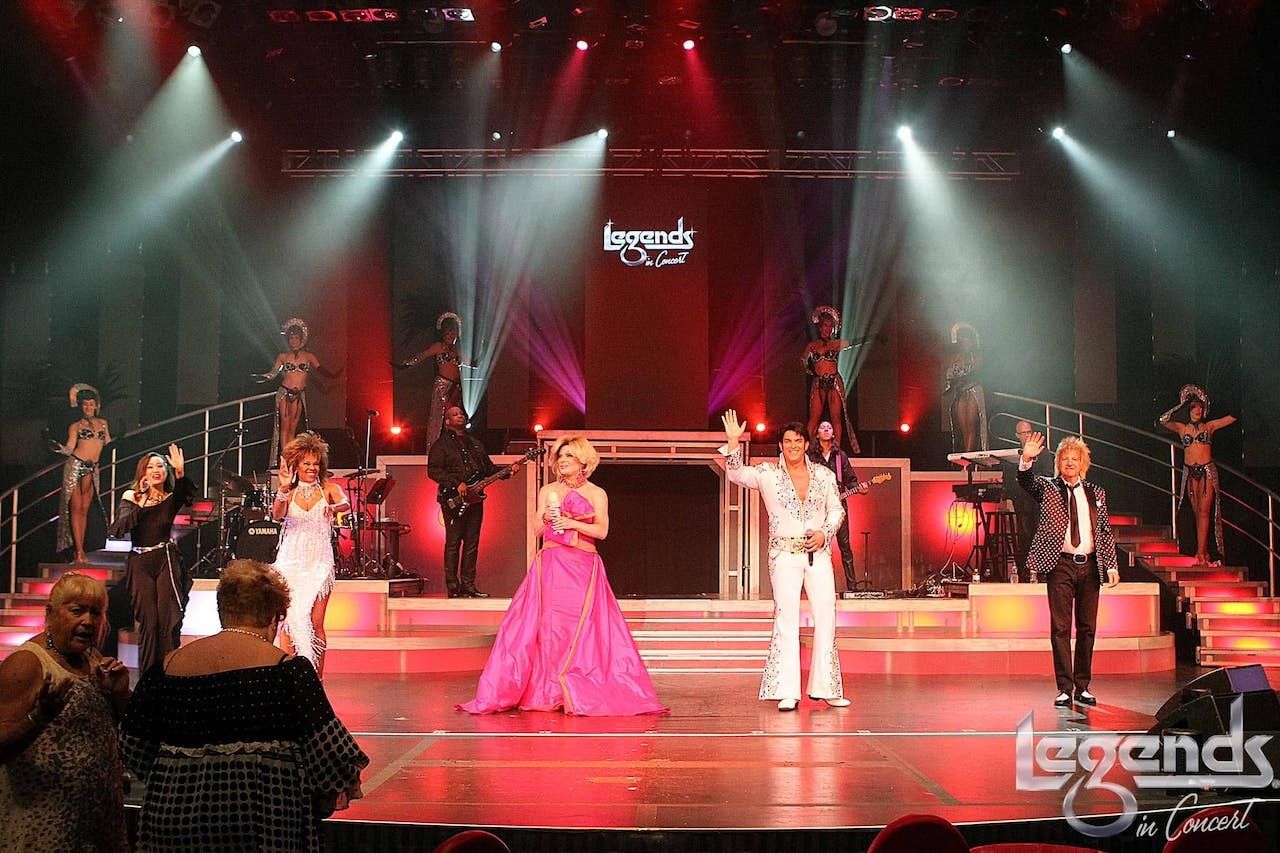 Legends in Concert has the unique distinction of being the longest-running show on the Las Vegas Strip (Penn & Teller, by contrast, is the longest-running residency show). While it has bounced around stages at different resorts, it’s always stayed on the Strip, and the talented cast is now taking their bows at the Tropicana. Legends in Concert has a deep pool of impersonator-performers to draw from so the lineup is always changing, but you can expect to see some real Vegas legends like Frank Sinatra, Elvis (obviously), and, of course, Joan Rivers, played by the one and only Frank Moreno — a Vegas legend in his own right as the longest-running performer on the Strip and now the host(ess) of one of the most classic shows in Las Vegas. Performances are nightly Thursdays through Sundays. 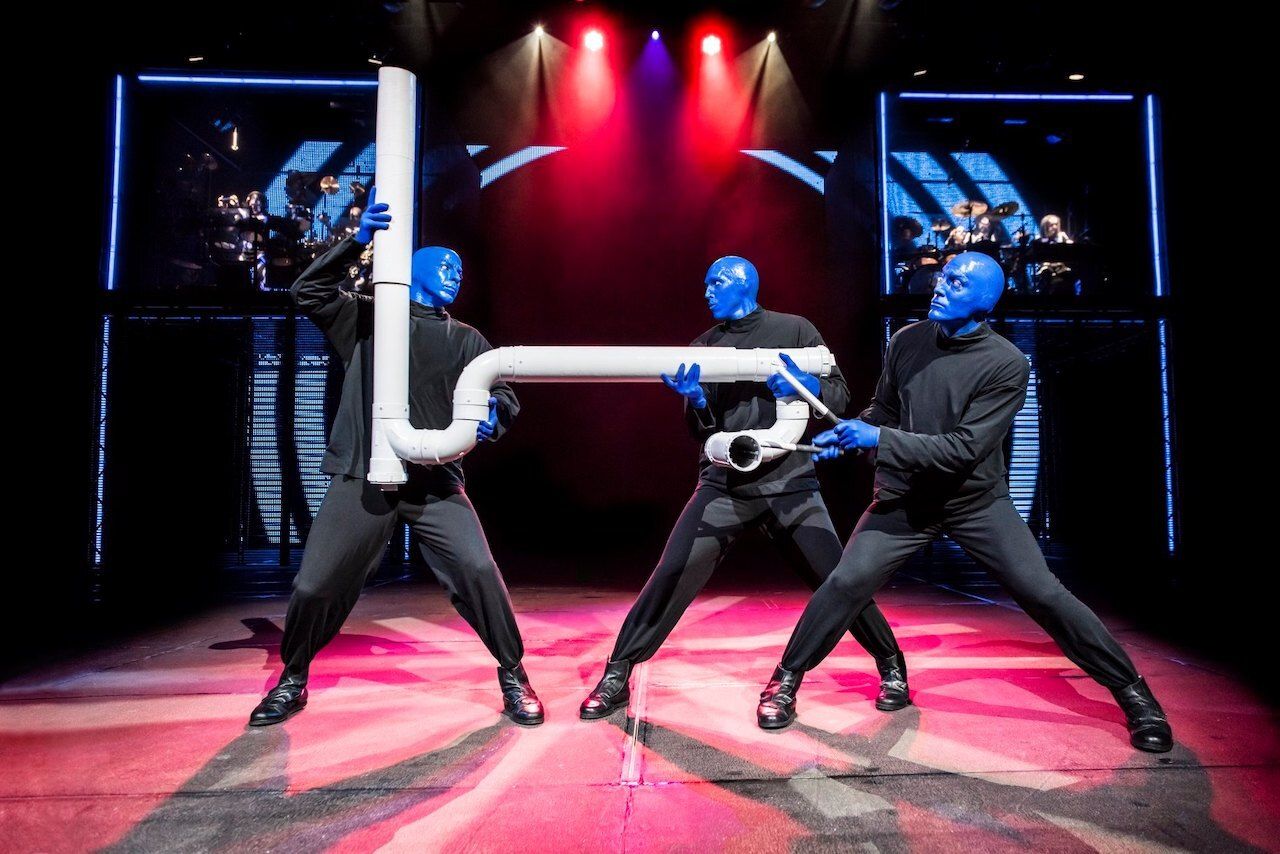 Blue Man Group has been around for over 30 years, yet they still pull people into the Luxor night after night. For the uninitiated, grown men paint themselves blue and bang on things while also blending different elements of music and art with current social/cultural references to stay relevant. There’s plenty of splashing neon paint and unlikely instruments made from materials like PVC pipe, and while there is some more adult nudge-nudge, wink-wink humor, it’s subtle enough to sail over the heads of any little ones you have in tow, who will just enjoy the visual and auditory spectacle. Shows are held twice nightly, Thursdays through Mondays. 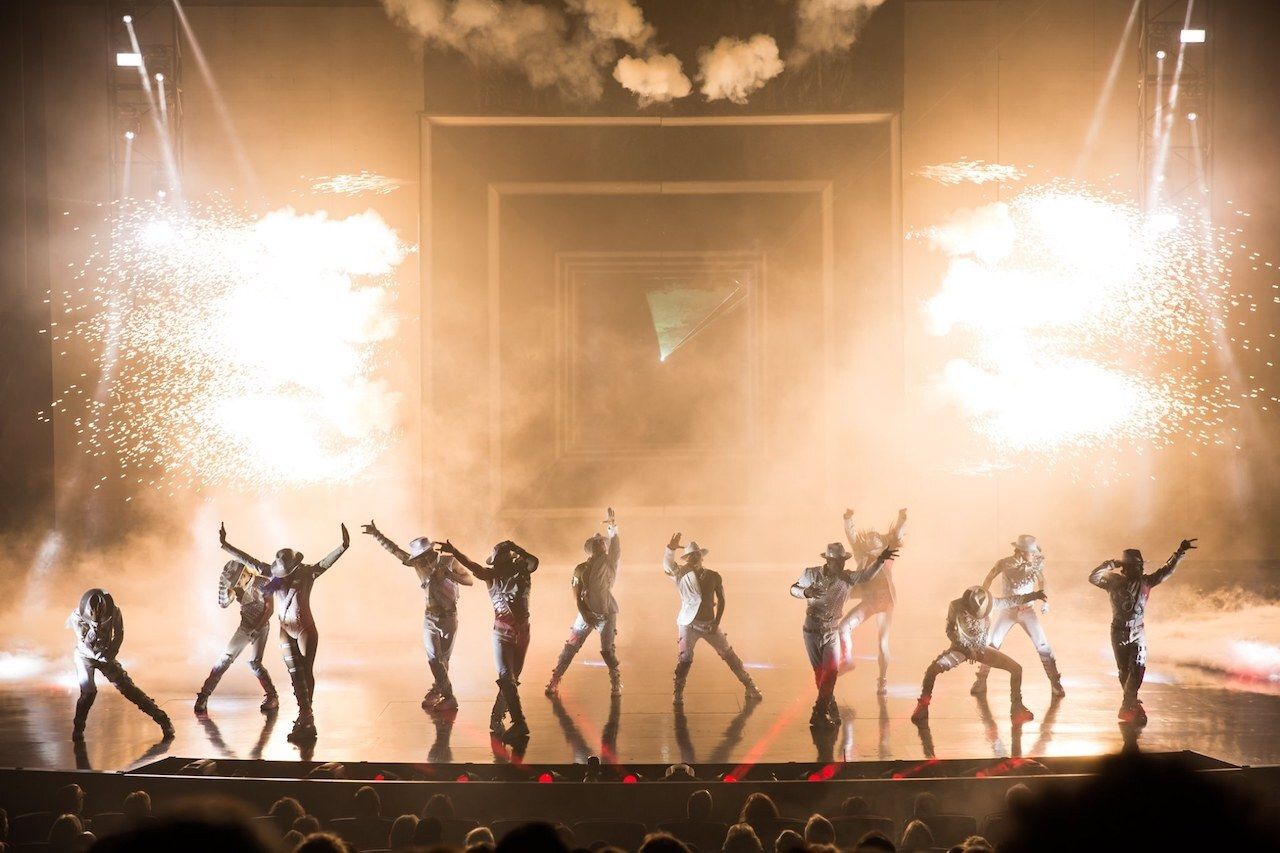 ONE isn’t the only Cirque show that sets their unique stage production, costumes, and choreography to a catalogue of music from a single musician (it’s not even the only Cirque show in Vegas to do so), but for our money it is by far the best. ONE takes some of the King of Pop’s biggest hits and best songs and recreates some of his most famous costumes and choreography like a music video come to life onstage. Every single number here is just fantastic, but “Dirty Diana” is especially sublime. ONE reopens at Mandalay Bay on August 19, 2021.

Magic Mike Live is reopening at the SAHARA after a massive renovation customizing the theatre just for this show (including zip lines that span the full venue and a two-story bar/performance space.) Magic Mike Live is an incredibly sexy (and definitely adults-only) dance-centric, immersive show that is so much more than an all-male revue you would find at other Strip shows. The magic returns August 27, 2021.

Hop on the OPM 73 spaceship flight from Uranus to Las Vegas. Yes, it’s juvenile. It’s meant to be. Just lean into it. OPIUM at the Cosmopolitan is a whacked-out sci-fi send-up structured around a ‘60s retro outer space TV/movie homage-meets-robot/furry/gender-fluid fetishism in a super-corny, wink-wink comedy of errors. OPIUM blasts off again on September 24, 2021. 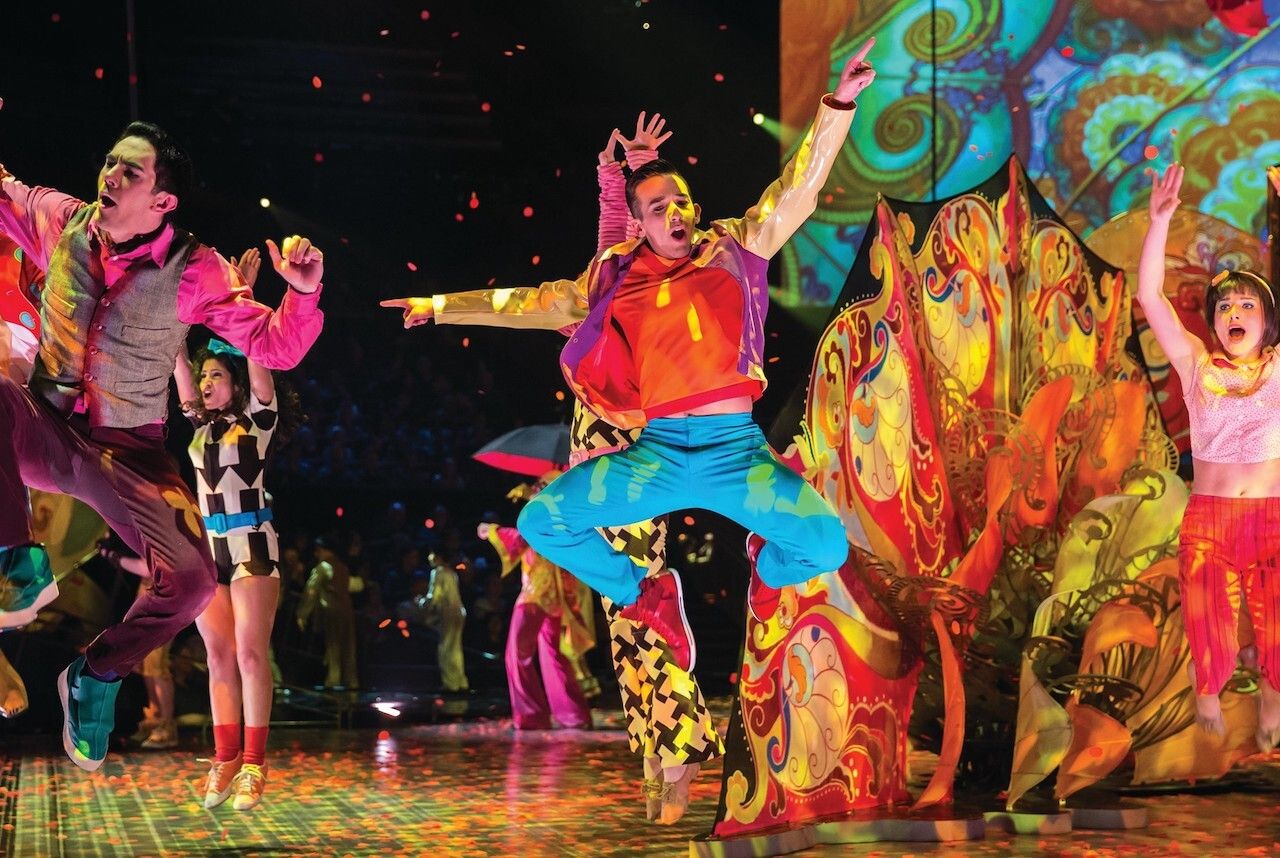 Photo: The Mirage Hotel and Casino/Facebook

The Beatles LOVE by Cirque du Soleil is the Fab Four as only Cirque could do, with interpretive choreography and super-psychedelic visuals to some of the Beatles’ most popular songs. LOVE is scheduled to return to the stage at the Mirage on August 26, 2021.

CultureThe 12 Most Photo-Worthy Spots in Vegas Off the Strip
Tagged
Culture Events Las Vegas, NV, United States
What did you think of this story?
Meh
Good
Awesome