Toronto’s cultural repertoire is marked by notable museums and art galleries; however, there’s culture to be had in the Ontario capital beyond traditional art institutions. Toronto’s neighborhoods are saturated with impressive murals and public art from both local and international artists. A walk through the city’s core is a surefire way to get a healthy dose of contemporary creation for free while getting some fresh air. Guiding you by neighborhood, here’s a deep dive into Toronto’s street and public art scene, be it bold street murals, vibrant graffiti, or whimsical statues. 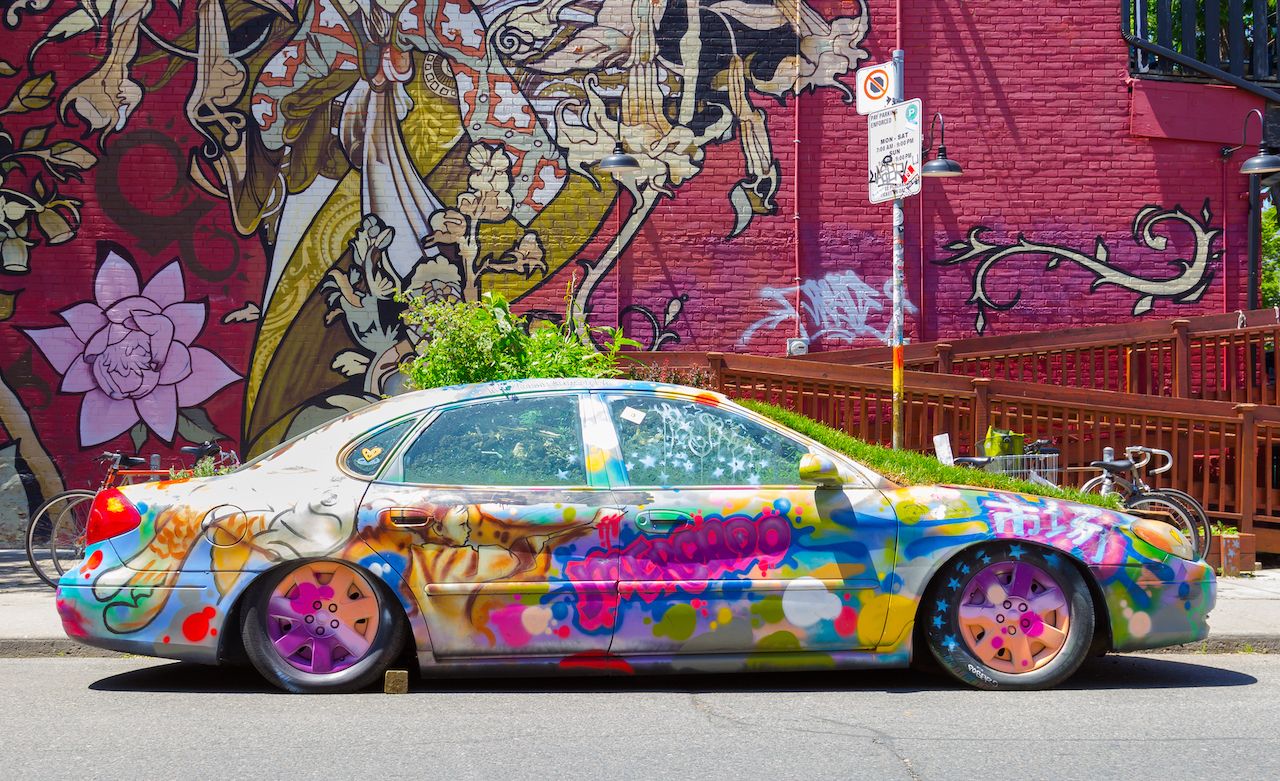 Starting at Augusta Avenue and College Street, venturing south into this edgy neighborhood will lead you to the iconic Kensington Market Garden Car — a funky spray-painted vehicle with plants and small trees sprouting out of its hood. This neat piece came to life with just a $200 scrap car that was completely transformed by city local Yvonne Bambrick and a team of passionate artists. It was recognized by the city as public art for the neighborhood and has gone through several eye-catching designs over the years. While the car does require hibernation from the harsh winter season, you can find this bright vehicle parked right by Oxford Street from May to early November. 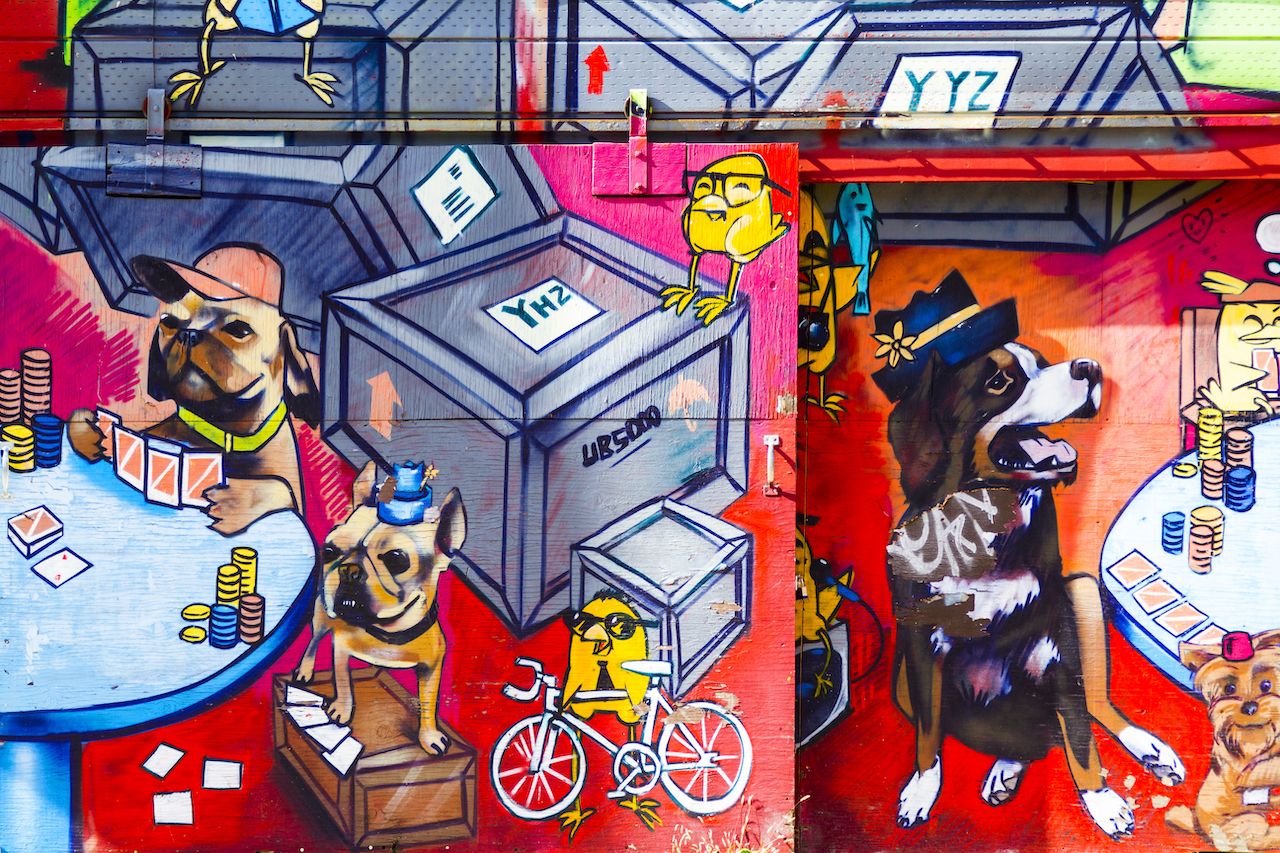 Augusta Avenue is lined with an assortment of eclectic boutiques and busy cafes worth checking out. Just a few minutes away is Wanda’s Pie in the Sky, where you can stop by for a fresh slice of pie, or try Jumbo Empanadas if you’re craving a savory treat instead. Keep an eye out for the animated paintings and graffiti that glaze the walls of nearby shops, then stroll about 100 feet past Bellevue Square Park toward a small alley. The entrance is marked by a painting by local artist Uber5000, starring various dogs at a roundtable playing poker. Further into the alley, you’ll be able to spot other local graffiti works and fun murals that change regularly. 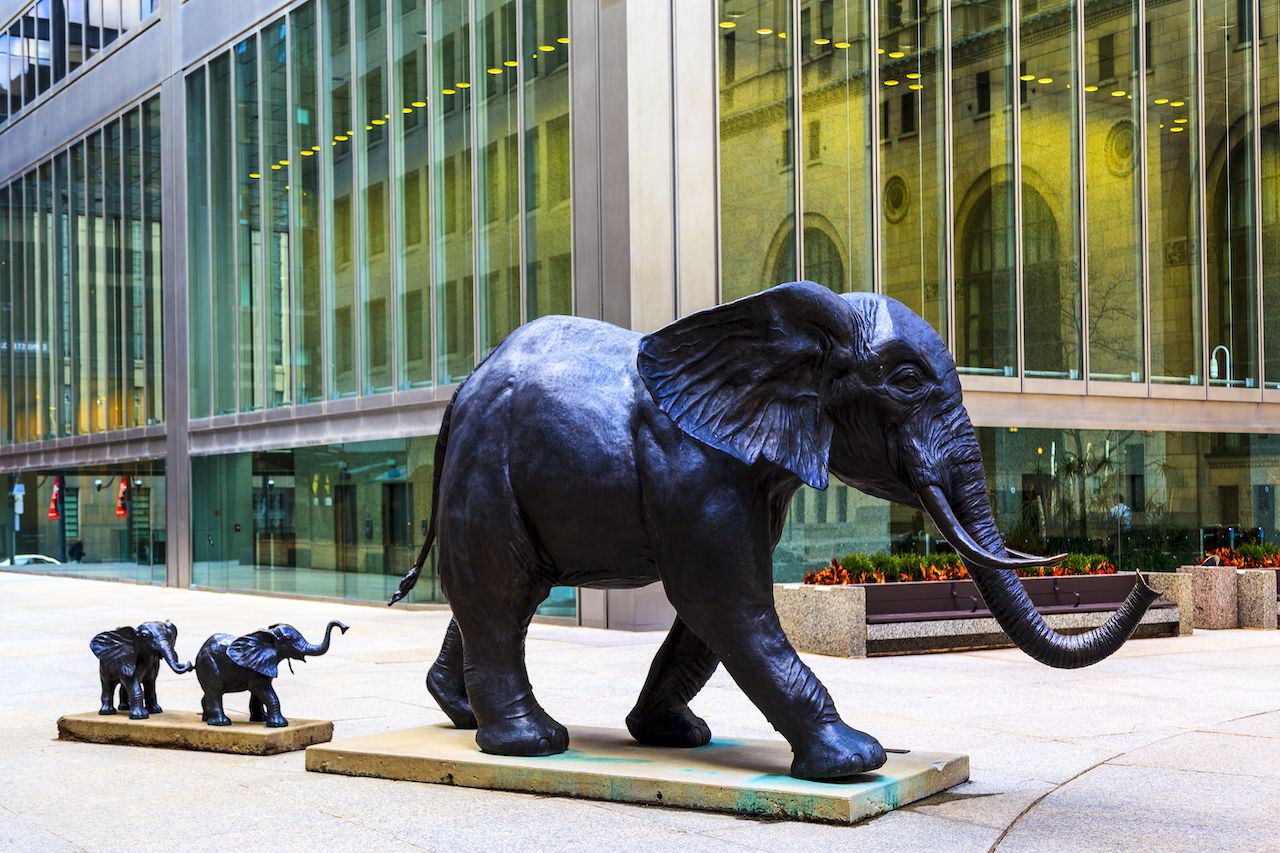 The heart of Toronto’s Financial District is along King Street West by University Avenue. Head east along King Street for less than 10 minutes until you reach Commerce Court on Bay Street. The architecture in this part of Toronto is extremely modern and vertical. Venture toward the hidden courtyard located directly behind Commerce Court where you’ll find “Tembo, Mother of Elephants.” This massive sculpture depicts a mother elephant followed closely by her two babies. Designed by sculptor Derrick S. Hudson, this mother elephant stands 10 feet tall and is one of the largest elephant statues in the world. 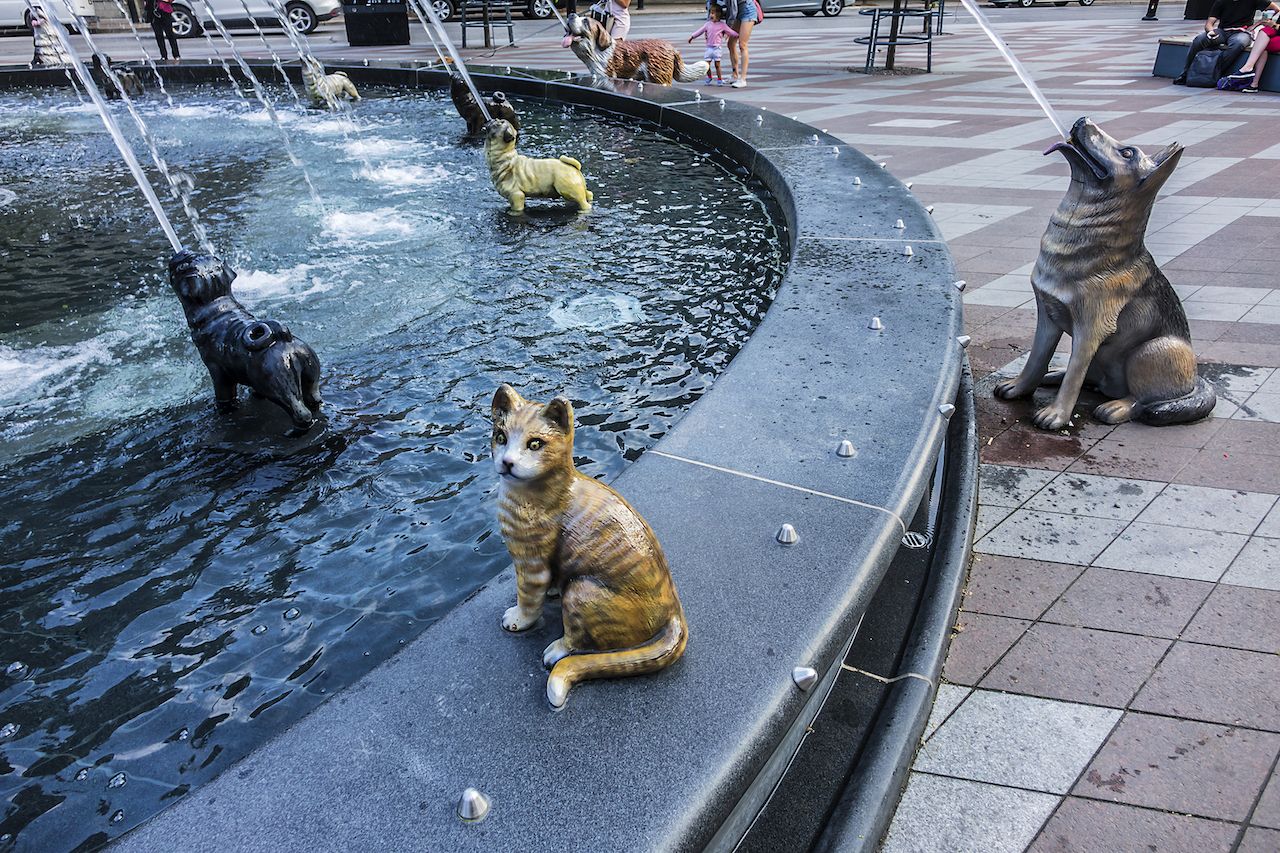 Next, exit south toward Wellington Street. After strolling a quarter of a mile east along Wellington Street, you’ll spot a green space in the heart of the city. Designed by Canadian architect Claude Cormier, Berczy Park was revitalized in 2007, complete with a dramatic centerpiece known as the “Dog Fountain.” This artistic and adorable waterwork features 27 cast-iron dog statues spouting water and a single cat enjoying the show. Have a seat and admire this whimsical artwork along with a view of the historic Flatiron building. 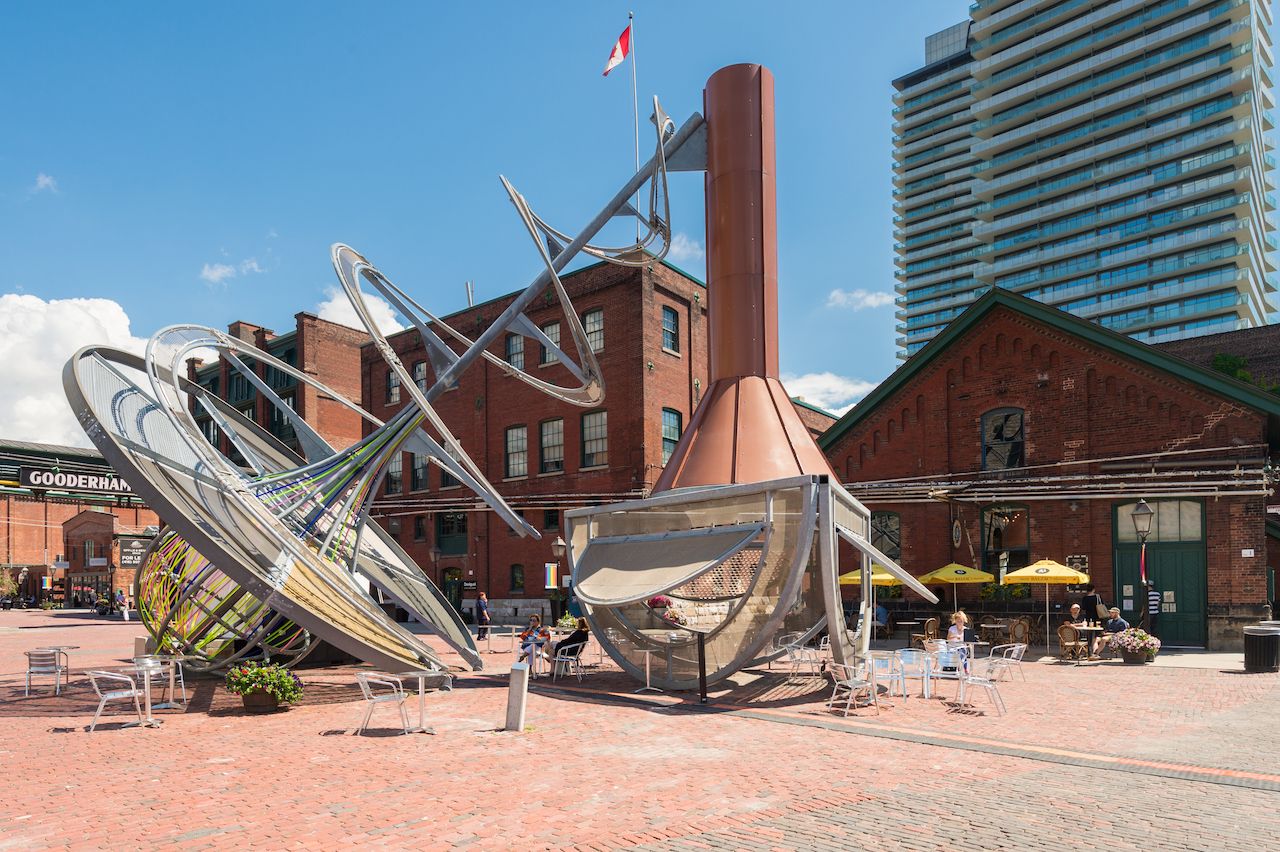 Marked by a bright red heart-shaped frame, start your afternoon at this district’s most inviting entrance by Gristmill Lane and Parliament Street. Venture down Gristmill Lane, which will bring you further into the depths of this trendy area of Toronto. Upon reaching Trinity Street, located right in the center square is a unique sculpture by American artist Dennis Oppenheim. Titled “Still Dancing,” this impressive 50-foot-tall steel creation has become a Toronto landmark. Directly across from this neat artwork is Balzac’s Coffee Roasters, where you can stop to enjoy a cup of coffee in a historic pump house with a rustic interior and exposed brick walls. 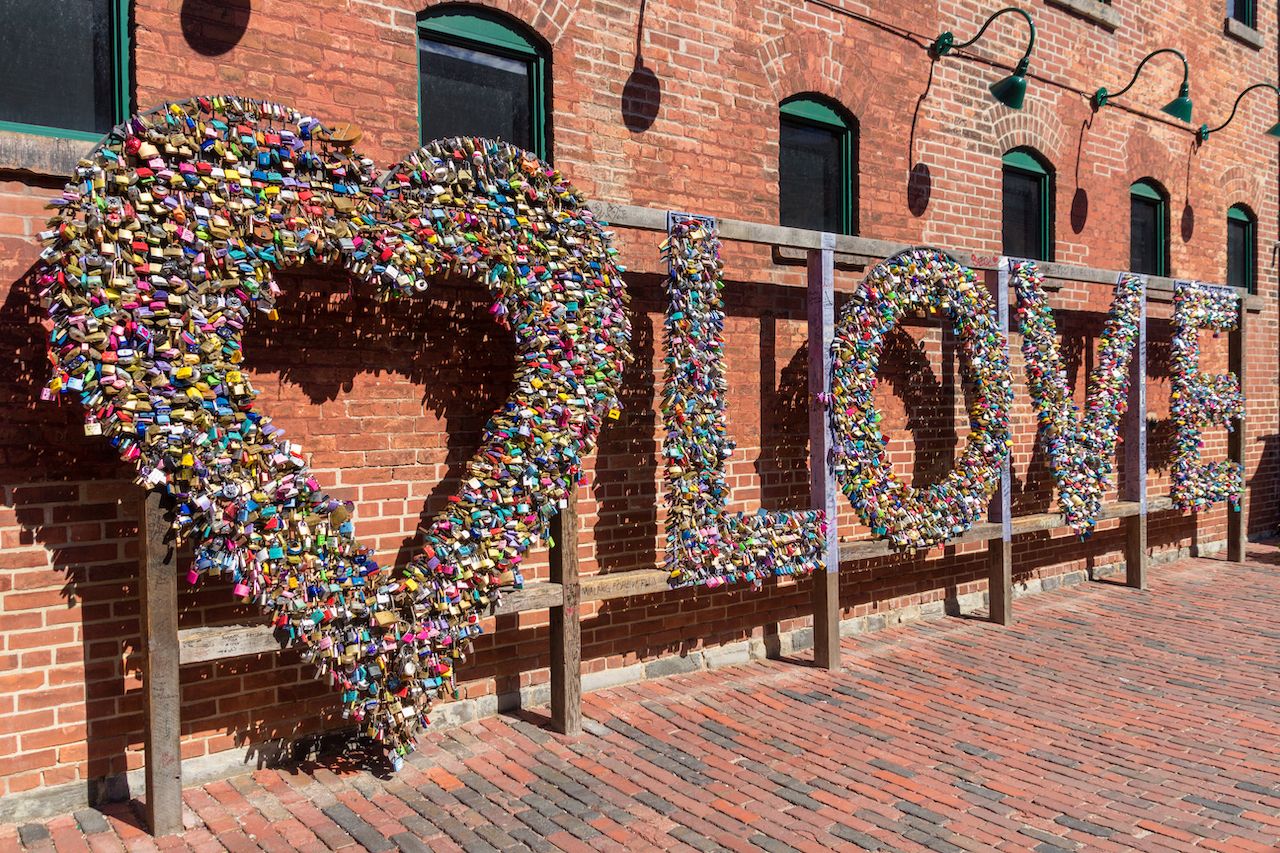 As a pedestrian-only district, you can comfortably navigate through the cobbled lanes and check out the many art galleries, artisan shops, restaurants, and art installations that give this area its cool vibe. Next, head north on Trinity Street for 200 feet until you reach Tank House Lane, then turn right to check out the popular Love Locks installation by Studio Rosenblatt. Perhaps one of the most photographed artworks here, this 30-foot long installation is set against brickwork. With five elements, consisting of a heart followed by the letters spelling “love,” visitors have taken over by attaching their own colorful locks to this steel creation.

Those who love Banksy will be happy to know that Toronto houses one of the artist’s pieces. To see it, head south to the city’s waterfront. Making your way to the second floor of the One York Street building by Harbour Street, you’ll find “Guard with Balloon Dog.” This piece features a uniformed man carrying a leash with a pink balloon dog. Originally created in an underpass by the waterfront, the concrete slab containing the artwork was salvaged when the area was later demolished to make way for residential and commercial buildings. The piece is now protected by a glass box and on display to the public. When you’re done, walk south on York Street toward Queens Quay. With a marked path for pedestrians and cyclists, this stretch is popular for catching scenic views of Lake Ontario. 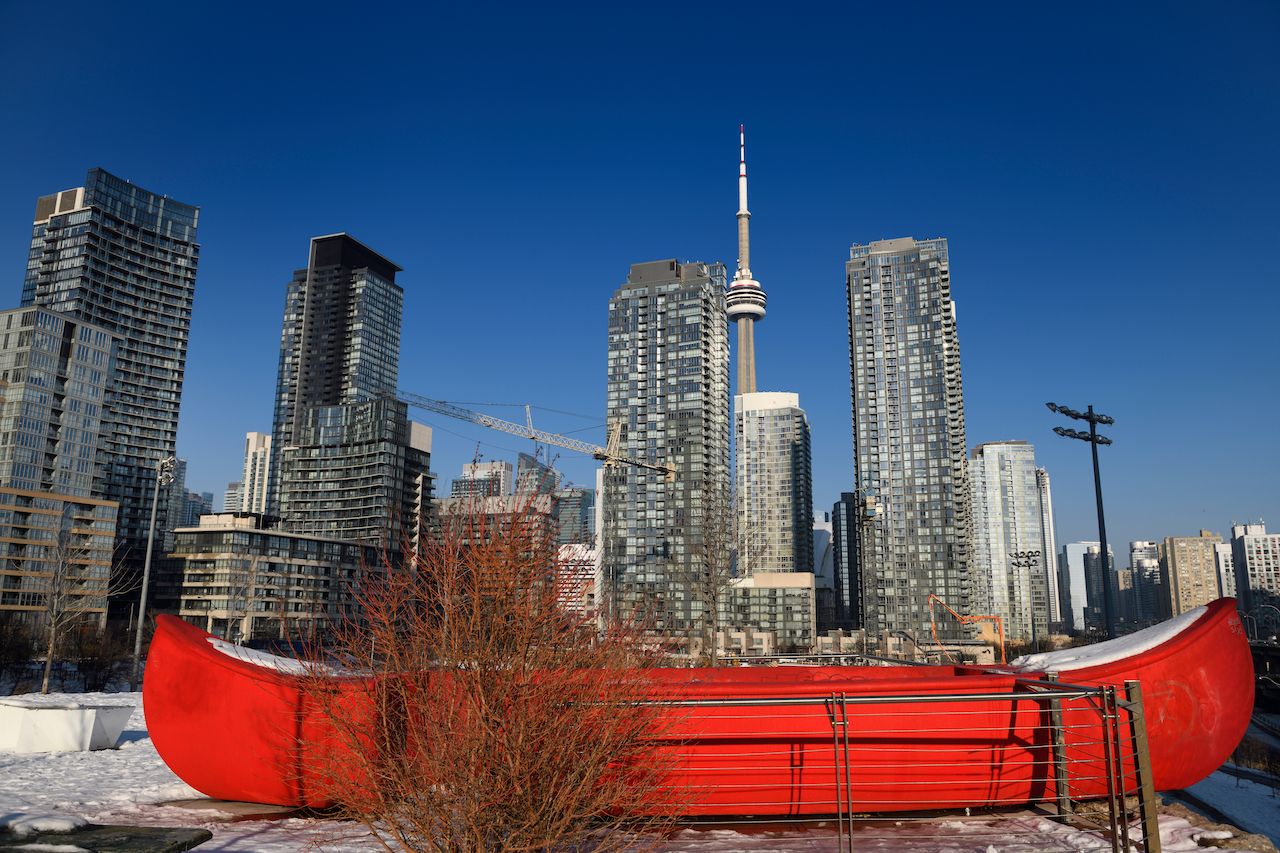 A 10-minute walk west along the waterfront trail will lead you toward the sandy HTO Park where you can take a break on the colorful Muskoka chairs that look out toward the harbor. Then, wander 10 minutes further west along Queens Quay until you reach Canoe Landing Park. Here you’ll discover the bold centerpiece of this green space — the oversized canoe sculpture known as “Tom Thomson’s Canoe.” With enough room for at least 10 people, hop inside and see views of the CN Tower, residential skyscrapers, and the busy Gardiner Expressway in the most Canadian way there is. Various other fun art pieces are dispersed throughout the park, including colorful fishing bobbers and a decorative beaver dam. 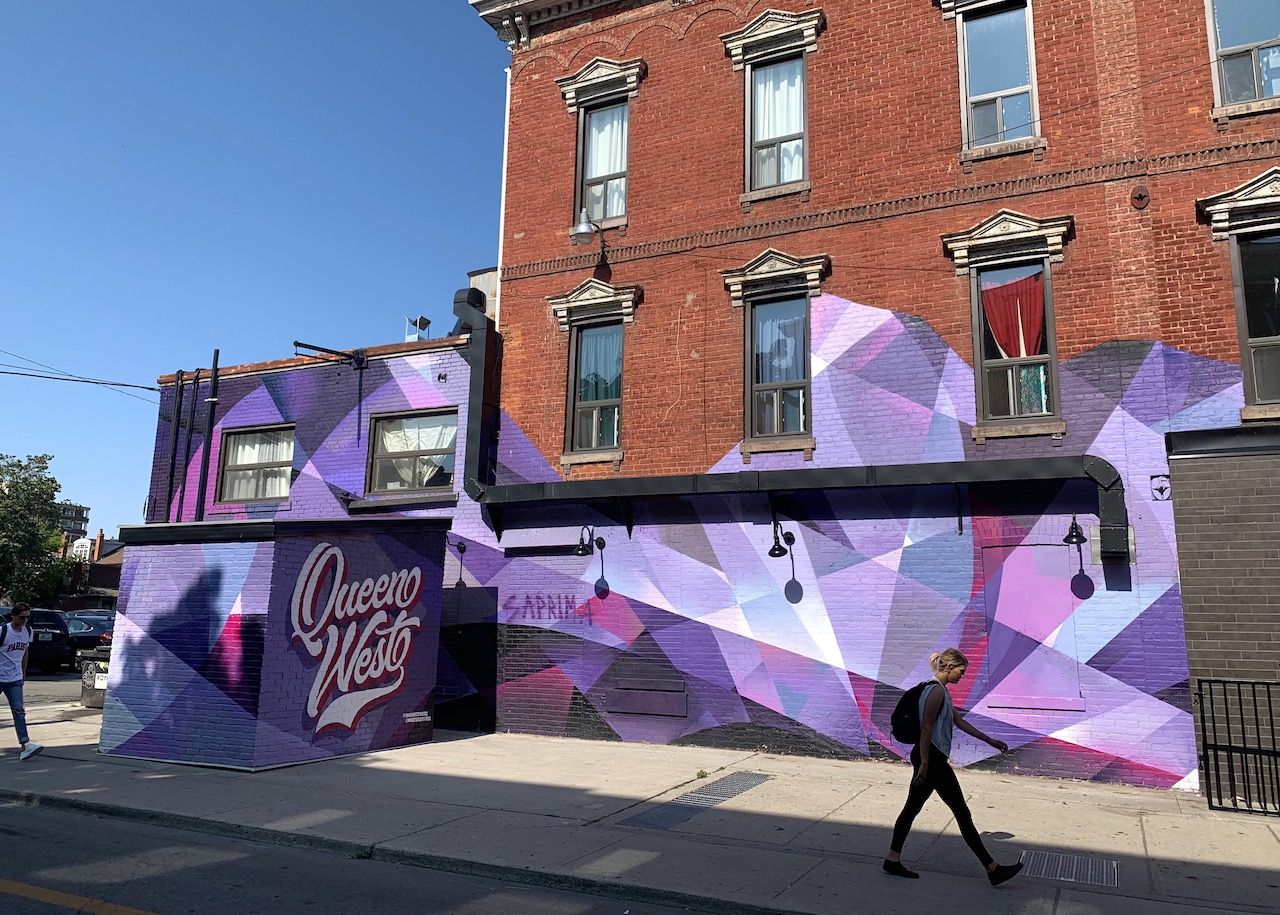 If you’re especially short on time, Graffiti Alley is the top destination to catch a glimpse of Toronto’s urban art scene. Entering at Spadina Avenue, make your way through this back alley stretch, where you’ll find entire walls and garage doors coated in graffiti. When you reach Augusta Avenue, look out for a massive Toronto-themed mural by local artist Uber5000. This wintry piece depicts bundled-up baby chicks ice skating at Nathan Phillips Square, a fun portrayal of a magical winter day at the popular downtown rink. Once you reach the other side of the alley, you’ll end up by Portland and Queen streets. A 10-minute walk west along Queen Street will have you walk by the neat shops and creative restaurants that encompass this trendy neighborhood. 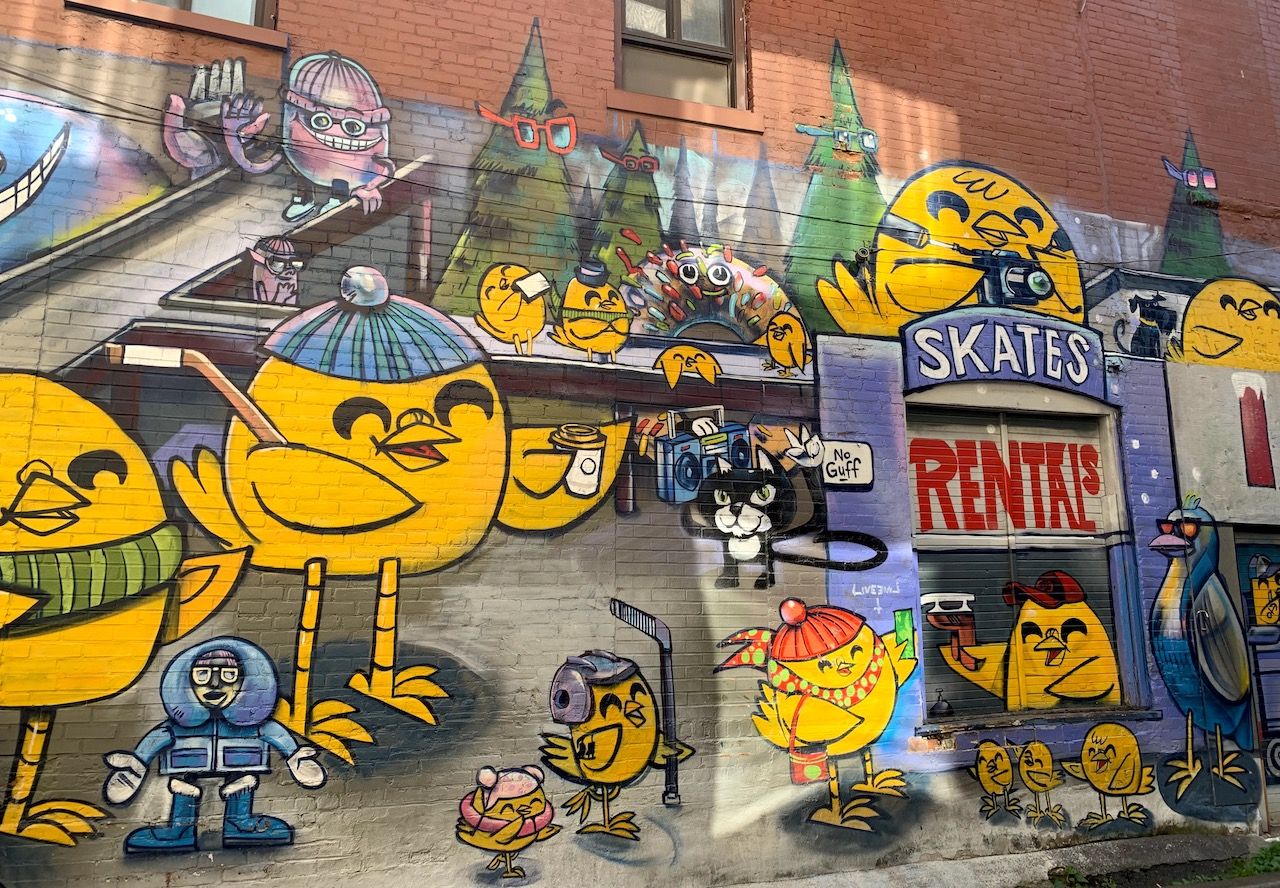 Before heading to the next art piece, make a pit stop at Nadège Patisserie, a popular spot known for colorful French macarons and croissant sandwiches. Then, only two minutes away is Claremont Avenue, where you’ll discover a vivid mural spanning the sides of three whole buildings. This bold creation is based on Japanese elements, including a montage of koi fish, blooming cherry blossoms, a hearty bowl of ramen, anthropomorphic sushi, and robotic characters. Bringing a pop of color and Japanese culture to the block, this piece was created in 2014 by artists Ken Galloway, Timothy Fukakusa, Mitsuo Kimura, Takashi Iwasaki, Darcy Obokata, and Shogo Okada.