Toronto is Canada’s most populous city, attracting people from around the world. This attracts plenty of developments, making it easy to skip over the historic parts of the city. But it’s well worth it to take a step back from the glitzy high-rises and the race for success for a charming look at the city’s past in Toronto’s Distillery District. Almost 200 years old, the area is home to the largest collection of Victorian industrial architecture in North America, as well as a National Historic Site of Canada.

Although the Distillery District is compact, it is not small, housing more than 40 heritage buildings on its 10 streets. The buildings have been carefully restored over the years, maintaining much of the original structures and repurposing materials to create an ideal balance of old and new. At its peak in the mid-1800s, the Gooderham and Worts distillery was the largest in the world, and the district still holds onto some of this booze-fueled history. Among the many offerings of the area, a local brewery, a sake company, and a distillery keep the district true to its name. Since 2003, the Distillery District has been open to the public in its current form, proving itself a dense pocket of culture, art, gastronomy, and more.

There are things to do year-round in the Distillery District. In warmer months, sit outside at one of the many patios and visit the Sunday market. In winter, the Christmas market takes over the district and Toronto’s Light Festival brightens up the snow-covered streets. Whenever you choose to visit Toronto’s Distillery District, you can be sure to find something to keep you entertained. It’s pedestrian-only, so wear a good pair of walking shoes and check out these historic spots. 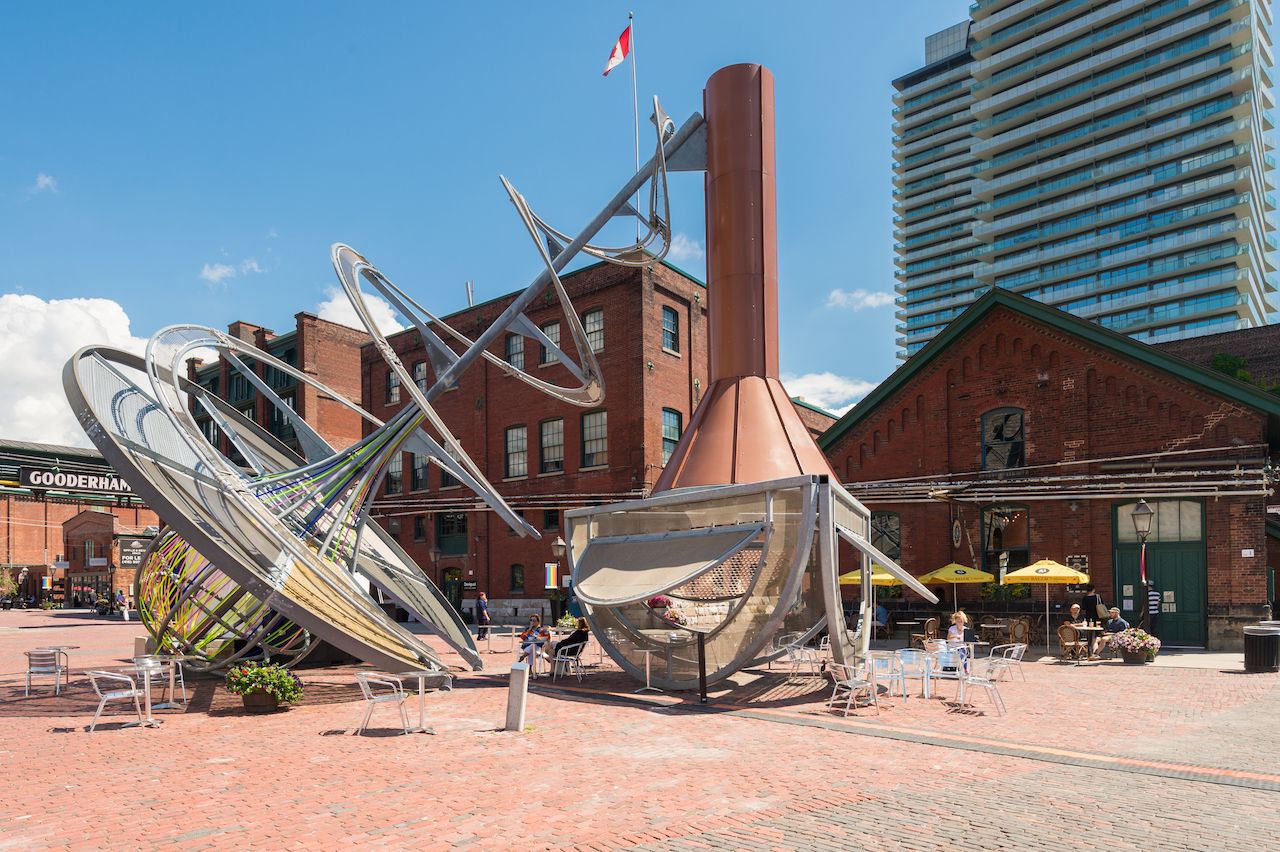 Different events take place in the Distillery District throughout the year, bringing new artists and their work to the public space. Large installations, sculptures, and interactive displays are all part of the ever-changing pieces in the streets of the district. Among the largest and most popular include “Still Dancing” from artist Dennis Oppenheim, which is located near Balzac’s Coffee Roasters. Another crowd favorite is a giant monster-looking sculpture originally created for display at Burning Man called “Koilos.” Toronto has a knack for offering a permanent home to Burning Man-inspired art, as the nearby sculpture “I.T.” by Michael Christian was also adopted from the festival. And you’ll inevitably pass the “LOVE” sign, one of the most Instagrammed spots in the entire city.

Where to eat in the Distillery District 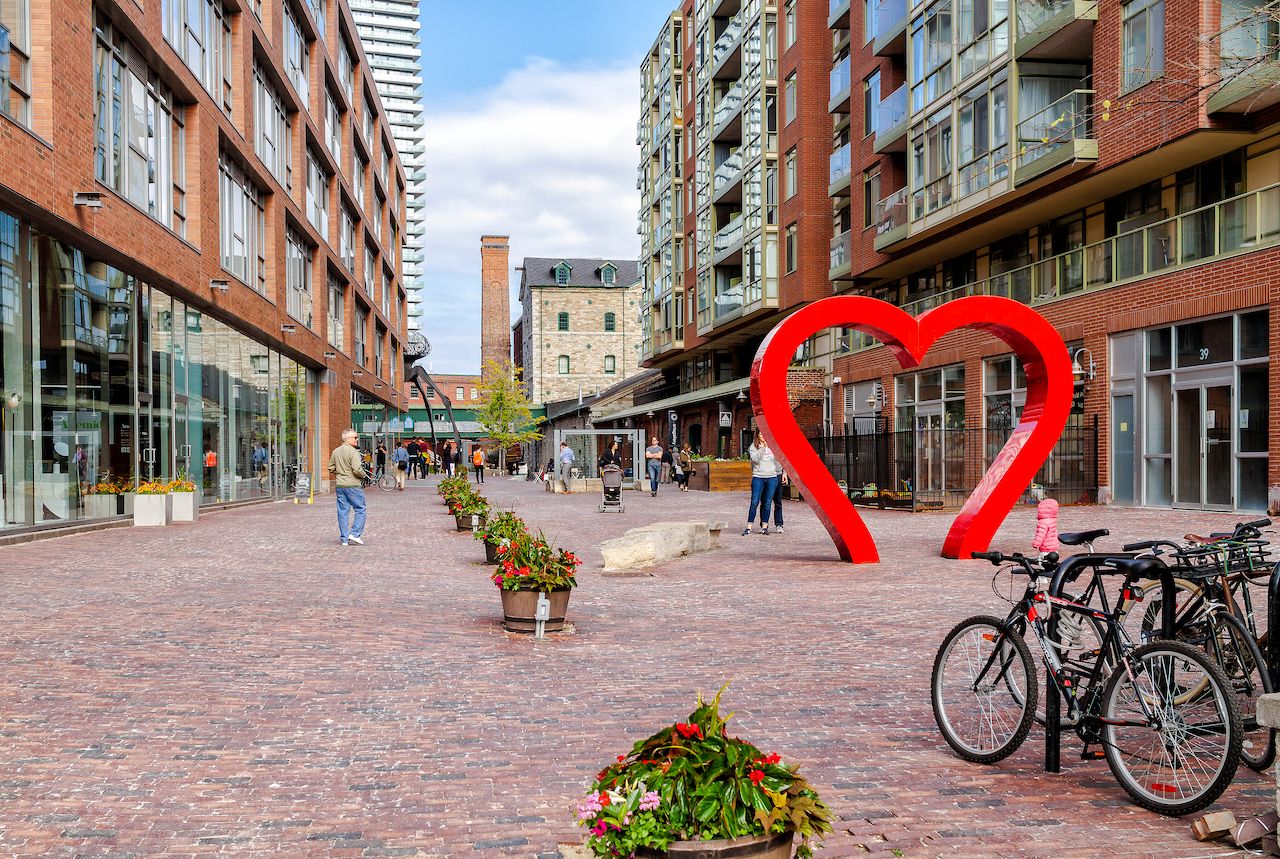 There’s no shortage of food in the Distillery District. Stop by Wildly Delicious, which has plenty of choices from just about every corner of the world. A cafe and deli counter with sandwiches, salads, soups, drinks, and more is great for a quick meal. The rest of the shop is filled with artisan food products, books, and kitchen tools. It’s the perfect place to stop for a snack and some gourmet finds.

For those with a sweet tooth, an easy choice is SOMA Chocolatemaker. Handcrafted, high-quality chocolate and gelato are made at the on-site chocolate factory. The raw cacao beans are mostly sourced from South and Central America, and are roasted and processed into the final chocolate product at the bean lab. Chocolate tasting is a must, and the assorted packages make great gifts to pack into your luggage — whether it’s a gift or for your later indulgence.

The cozy space at Brick Street Bakery is the ideal showcase of the District’s handcrafted ethos. The choices of baked goods range from savory to sweet, flaky to solid. All are homemade with organic flour. Not only are there enough baked goods to keep you coming back daily, lunchtime classics such as soups and sandwiches are also sold. Brick Street Bakery is a great spot for a coffee and a bite before exploring further.

Where to drink in the Distillery District 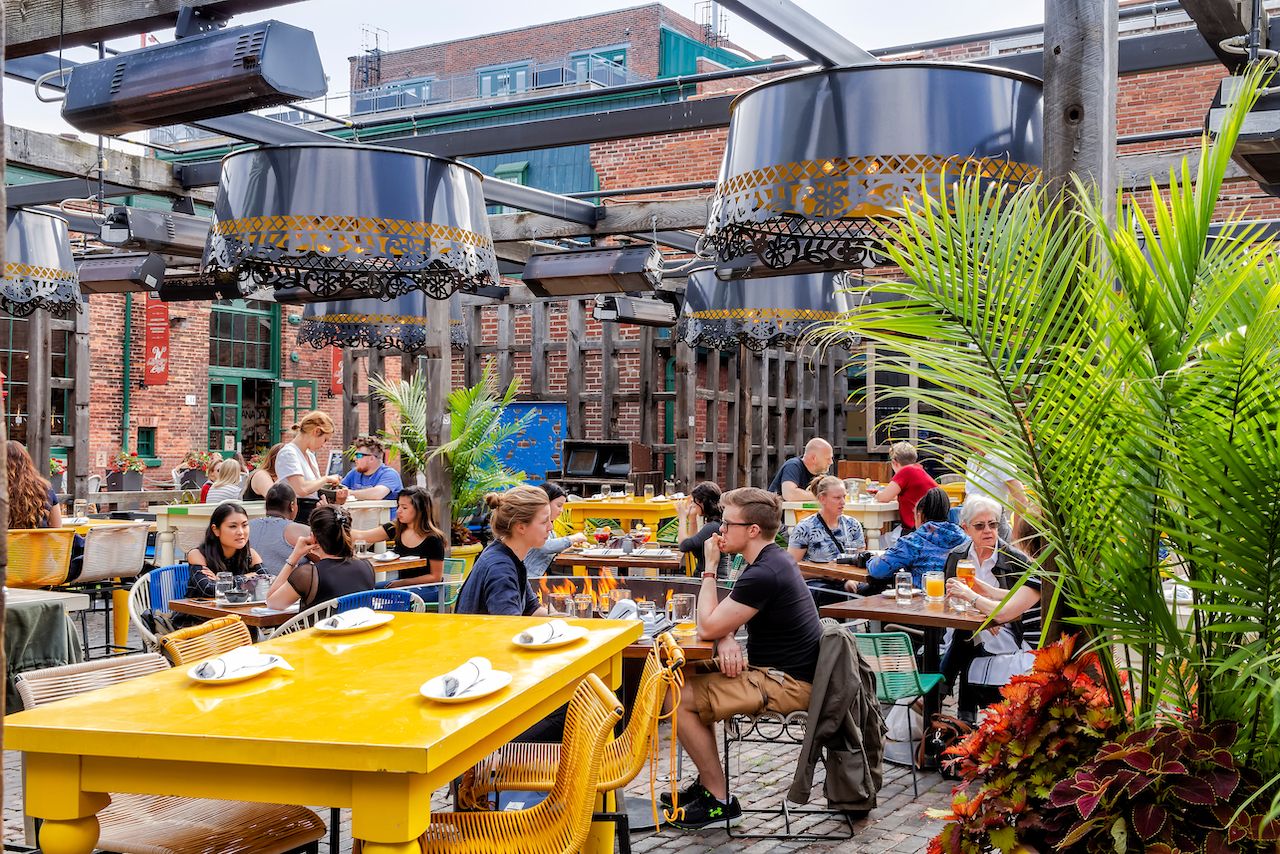 Staying true to the origins of the district, the Spirit of York distillery invites the public in for a closer look at the products crafted. The visible equipment allows customers to see first-hand the steps of the distillation process alone or through a guided tour. The tasting room is open daily and the sleek decor focused around a central bar adds a special touch to the experience. If distilled liquor is not your first choice for alcohol, check out Mill Street Brewery, the home of Ontario’s first organic beer, or Izumi, a sake brewery that started in 2011.

The neighborhood is also lined with cafes and pubs where you can enjoy a drink and a bite on the patio (in summer, at least) and many feature local craft brews on tap. 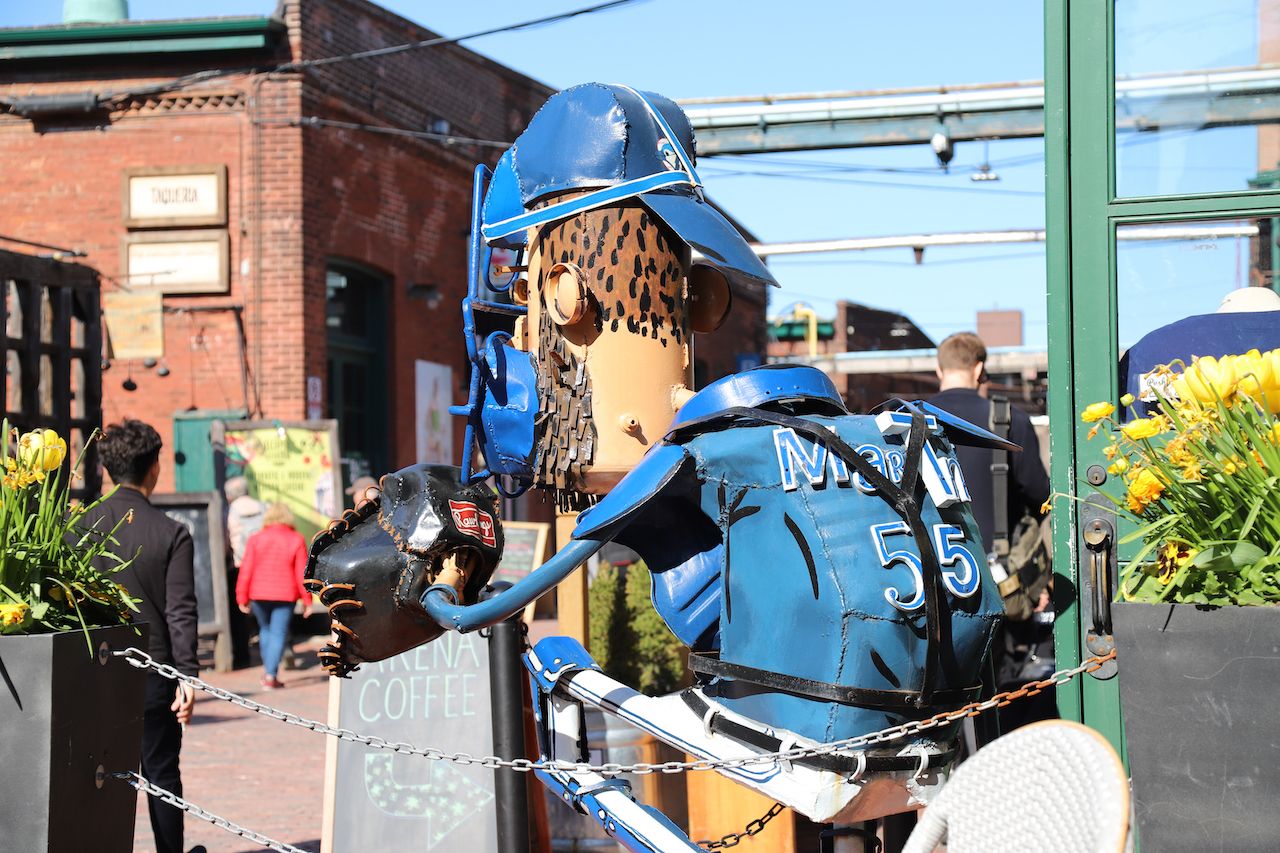 There’s no better place to view art than in the studio while interacting with the artist. Artscape Distillery Studios is a nonprofit organization that redevelops heritage buildings into studios for artists. The Case Goods Warehouse is one of these spaces, hosting over 50 studios and retail options. Photographers, painters, jewelers, theater groups, and furniture makers are just some examples of the creative expression on display. Artscape frequently hosts events and art shows, a unique chance for locals and tourists to mix and converse with the artists firsthand. The weekly farmers market happens every Saturday from 8:00 AM until 12:30 PM, where you can not only peruse the art, but also grab a bite and check out locally made goods as well.

Live performances in the Distillery District 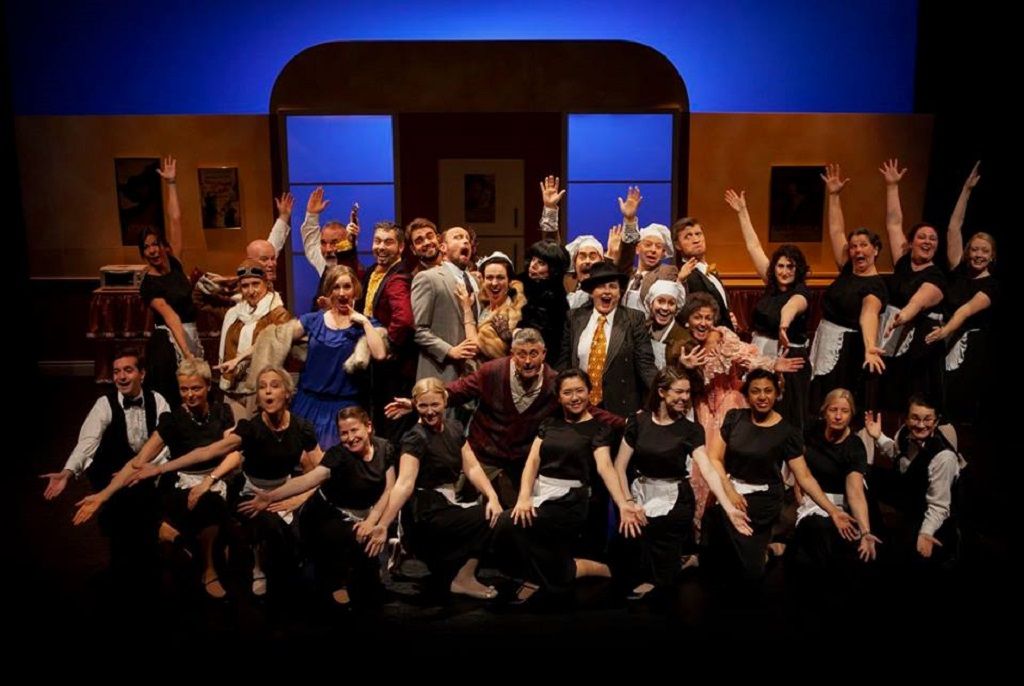 When it comes to performances, there is no better place than the Young Centre for the Performing Arts. Theater companies, choreographers, dancers, poets, musicians, and other artists use the space to educate and share creative talent with audiences. Shows happen throughout the year in multiple venues inside the space. Beyond the confines of the Young Centre, the Ernest Balmer Studio hosts performances often put on by the feminist theater company Nightwood Theatre.

Food + DrinkThe Most Diverse City in the World Also Has Its Most Exciting Food Market
Tagged
Culture Travel Trip Planning Toronto, Canada
What did you think of this story?
Meh
Good
Awesome