When one thinks of Switzerland, it’s easy to picture snow capped Alpine peaks, picturesque mountain towns, and glacial hikes. Don’t forget, though, that those peaks are usually pictured with a lake in front of them. Switzerland has about 1,500 lakes – including the largest in Europe. In the summer, these lakes, as well as urban rivers and canals, become some of the coolest beaches on the continent.

Since moving to Zurich, many people have told me me their favorite thing about summer in the city is the fantastic “badi” scene. Badis are what German-speaking Swiss call pretty much any established swimming spot. These refer only to the country’s incredibly well-kept neighborhood swimming pools most of the year. But come May, stretches of Zurich’s lakes and rivers turn into swimming areas either by the addition of a wooden frame that creates a lakewater pool, or simply by adding in some steps, piers, and plenty of amenities – including changing rooms, showers, lunch kiosks or restaurants, sporting equipment to rent, and more. In the evening, the most popular summer badis turn into swanky bars and concert venues.

These nine favorite Swiss badis and beaches serve all sun-lovers who are looking for an inland European escape.

Flussbad Oberer Letten is the most urban-feeling badi in Switzerland. It’s located on the Limmat River not far from Kreis 5, the edgy Zurich district that’s home to both the red light district and hopping nightclubs. A concrete structure has turned a quarter-mile length of the Limmat River into a place to swim and “drift” – as is popular to do in the speedy current. The Limmat River flowing on the other side of the structure is off-limits, as it is everywhere except for one day a year when this area becomes the end-point for an annual Limmat Swim. While the drifting is cool, the beach volleyball, drinks and food from the Panama Bar, people watching, and all-around party vibe make this badi a favorite.

The Frauenbadi Stadtshausquai (Women’s Pool at City Hall) might be one of my favorite badis in Zürich – but it is really less of a beach than a cool, uniquely Swiss place. It lies, incongruously, near the chicest part of Zurich, steps from the see-and-be-seen bars and haute couture boutiques.

During the day, the Frauenbadi welcomes only women, and it’s long been a gathering place for Zurich’s lesbians and queer women. At night, the location turns into Barfussbar, or barefoot bar, and is open to everyone. After you take your shoes off, you can hang out in the interior courtyard, where the DJ spins tunes, or walk out onto the wooden deck to admire the city lights. Since you’re barefoot, you can also dip your toes into the courtyard pool or the one by the exterior deck.

Once a year, on an August Saturday, residents can enter the Limmat River on which the Frauenbadi is located, a short distance from the northern end of Lake Zurich, which empties into the river. When the water flow of a huge lake compresses into the narrow river, it creates a fierce northerly current.

Groups of friends, couples, and families with older kids line up with their dry bags and floaties and pass through the Frauenbadi doors after showing their tickets. (The 4500 tickets always sell out within hours.) They strip to their swimsuits, stash clothes in their dry bags, and jump off the Frauenbadi dock. Even for non-swimmers, it’s good fun to watch them jump and drift away to Flussbad Oberer Letten. 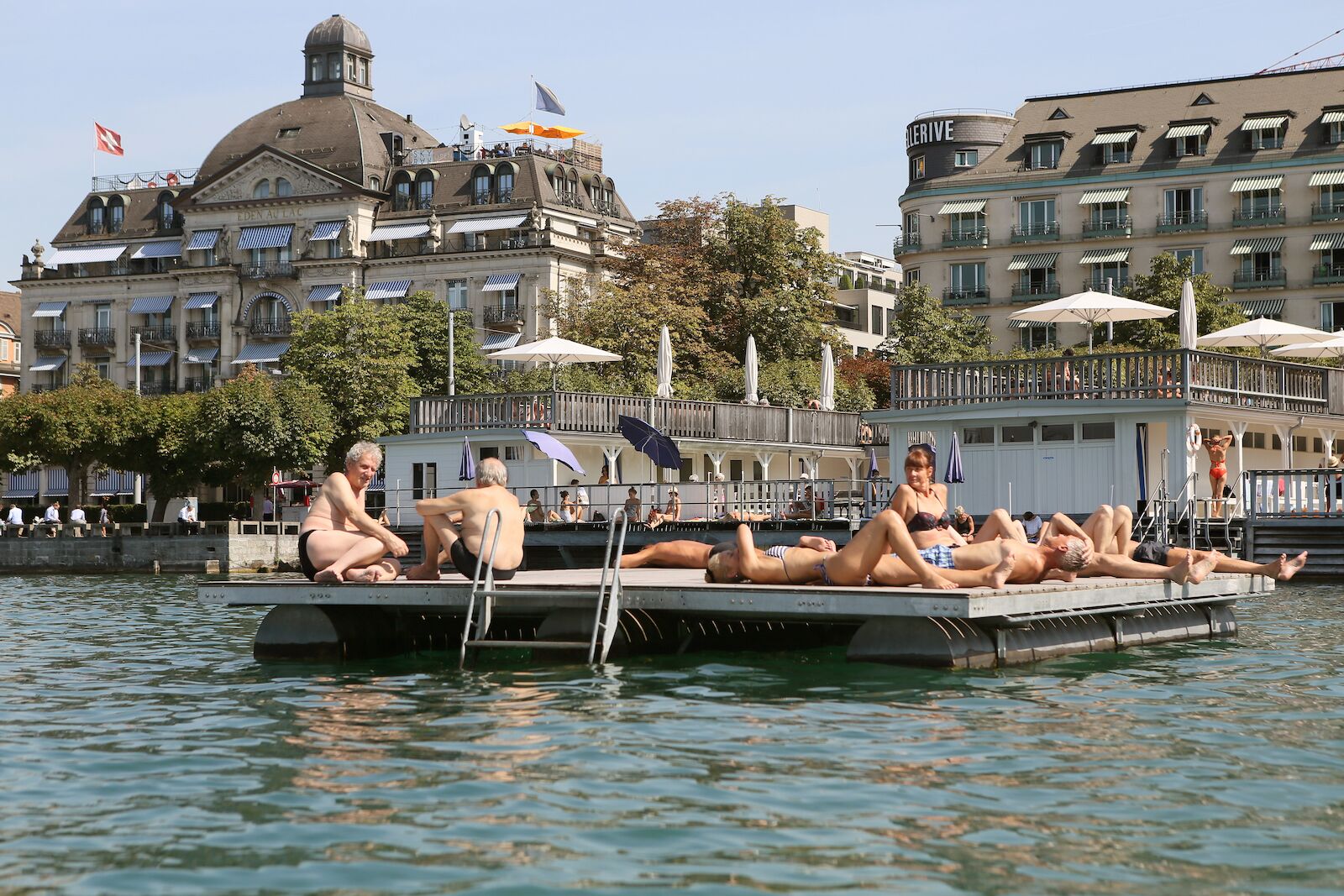 Lake Pool Utoquai is an eight-minute stroll along the lakeside promenade down from the Opera House Plaza. The handsome whitewashed wooden structure was built in 1890 and was designed with separate swimming pools and sundecks for men and women. However, there’s also a common sundeck and all genders are free to swim out together to the three floating rafts. You can also rent stand-up paddle boards or grab a bite to eat. Seebad Utoquai has one of the longest open seasons and, like most badis, charges an entry fee. 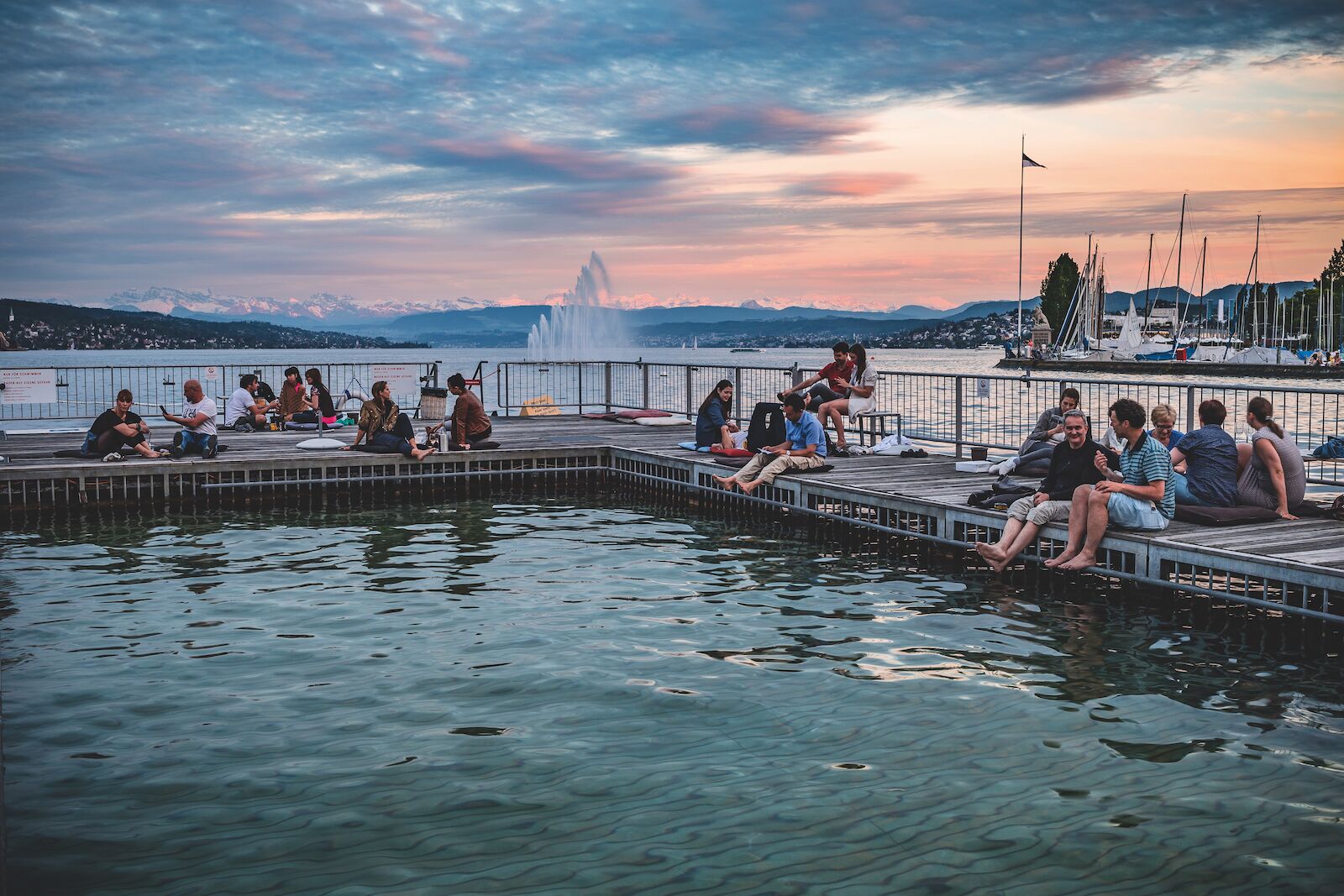 Seebad Enge is one of the more amenity-packed badis in Zurich with swim coaches, SUP rentals and classes, and spa amenities like yoga classes and massages. During the colder months, Enge has saunas, but these are closed during the badi season. There are women’s and co-ed swim lanes. And the fun doesn’t stop when the sun sets. At night, Seebad Enge turns into a nightclub and a concert venue. 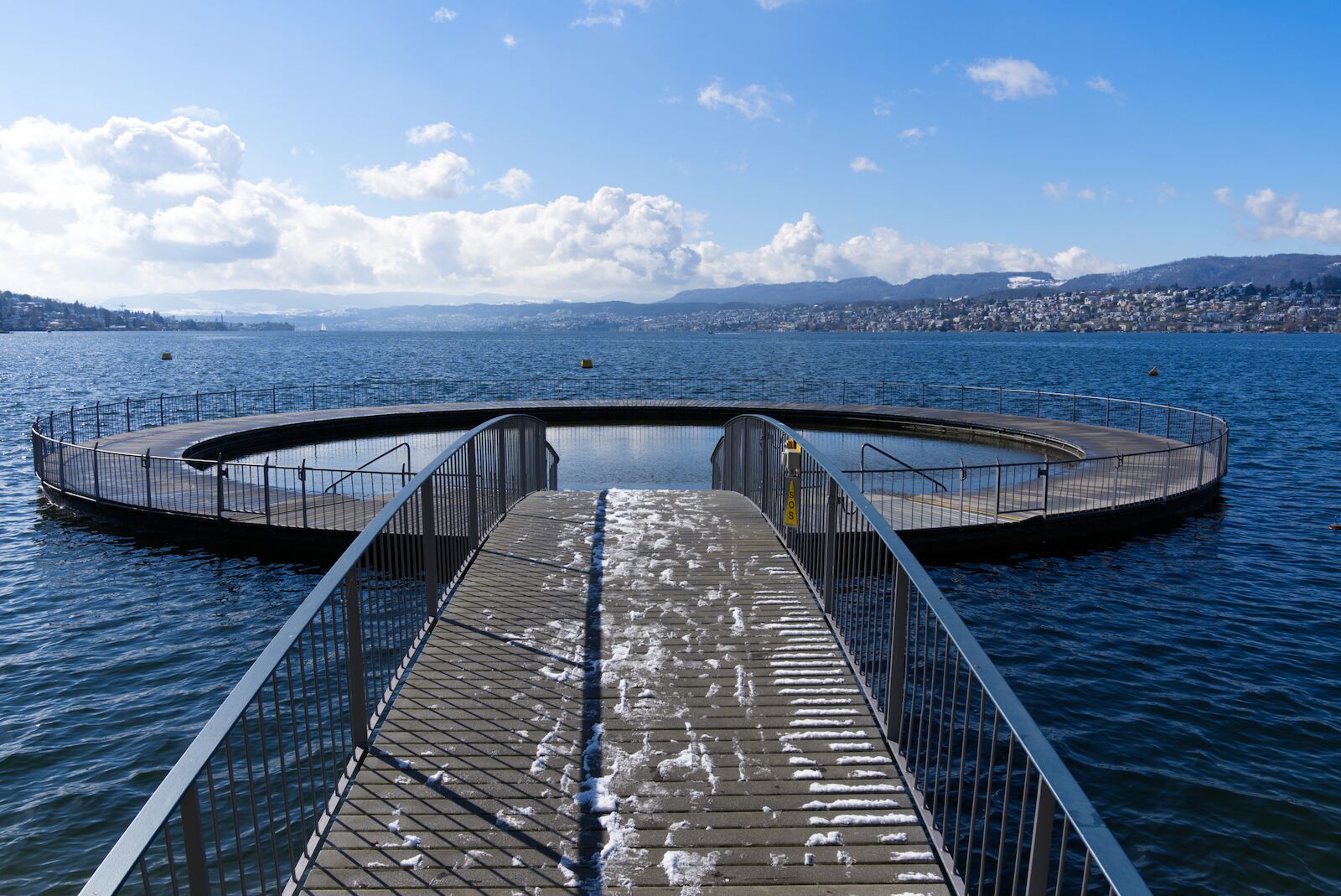 At the southern end of Zurich’s lakeside Chinagarten park is the Strandbad Tiefenbrunnen. The wooden deck here makes a large, circular lakewater pool. Multiple floating rafts, diving boards, and a huge, spiraling water slide out in the lake make this a popular spot for kids and families. Those same families can enjoy barbecue areas on the grass and rent stand-up paddle boards.

If you forgot a bathing suit, you can buy it at the Tiefenbrunnen shop – or skip it altogether. Two sundecks, separate by gender, allow for clothing-free sunbathing that’s a great way to get rid of those pesky tan lines.

Tiefenbrunnen is also the most popular beach fo gay men in Zurich. It’s often a must-visit for gay travelers who come to Zurich in the summer. 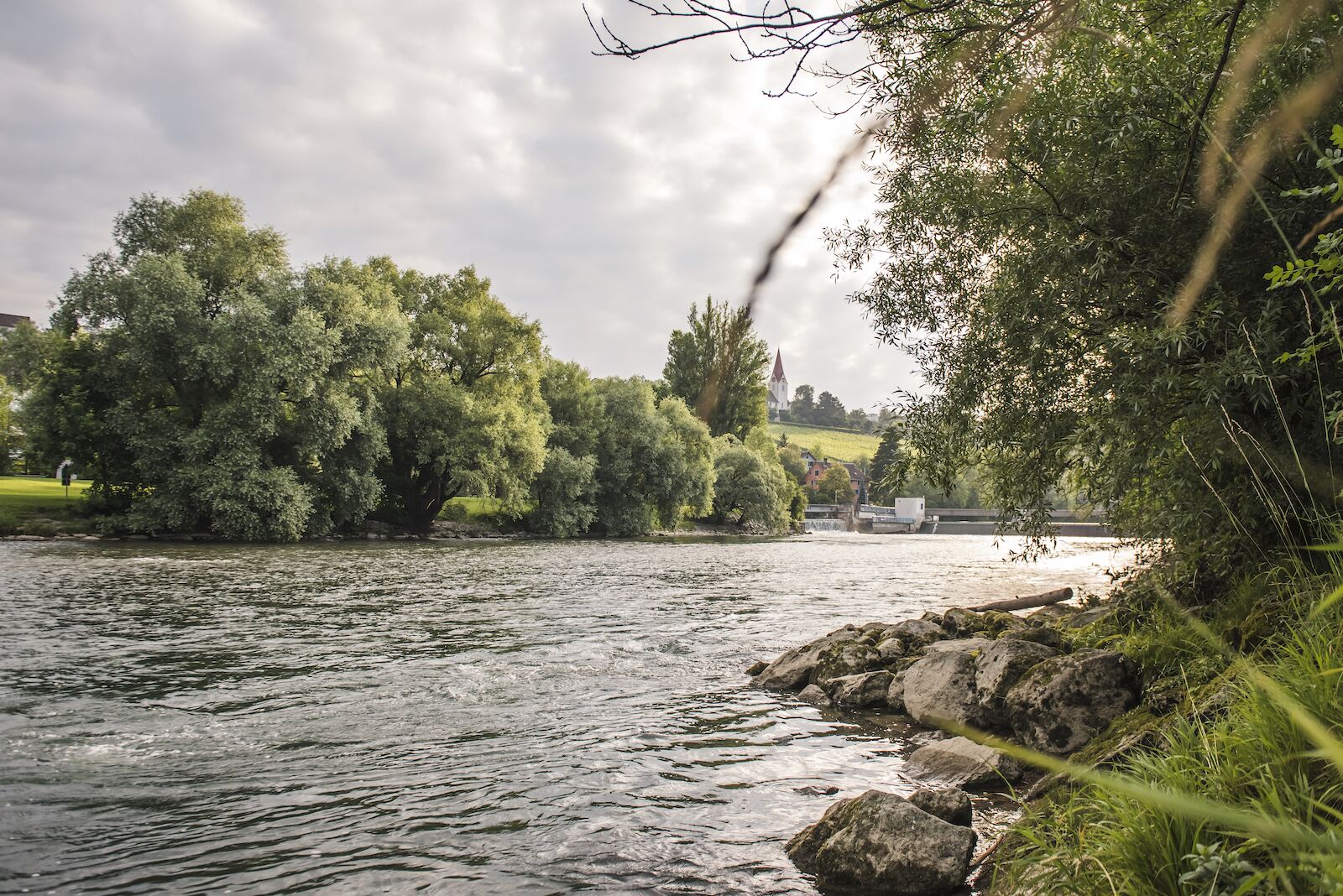 Werdinsel is an island on the Limmat River, and there’s a lot going on there. The Au-Höngg River pool has a 200-meter track for swimmers as well as pools for paddling. Families will find a playground, barbecue pits, and everything else for a getaway in the city. But walk a little farther and you’ll also find a nudist beach and a gay beach. Note that despite the permissive atmosphere, there’s no hooking up on the island itself, and Zurich police see to it that the rules are followed. 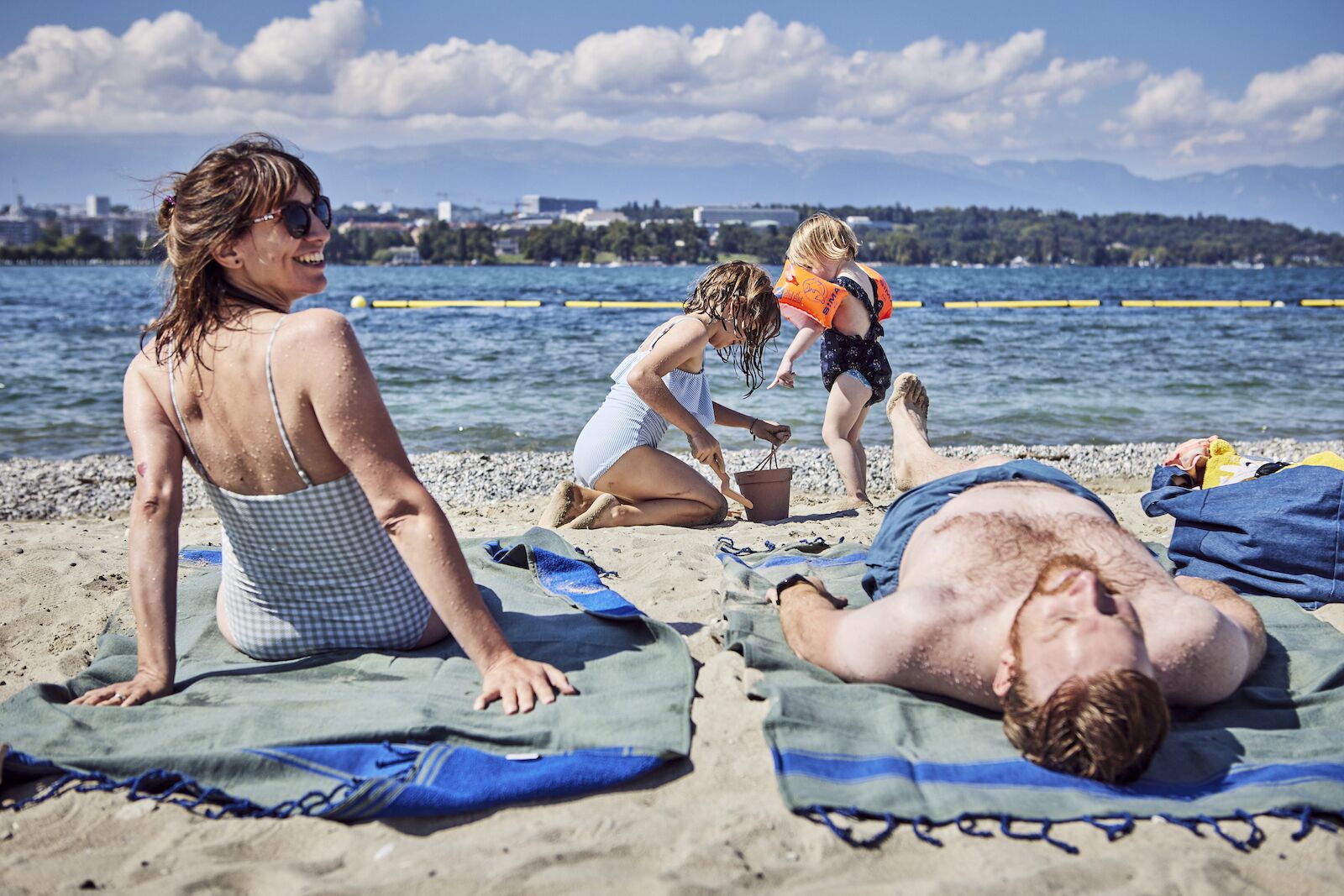 Given the size of Lake Geneva, known in French as Lac Leman, it’s no surprise that its shore is filled with beaches. The most interesting of these is the quarter-mile-long sand beach of Eaux-Vives, since it’s located in the heart of Geneva, offering a view of the famed Geneva Water Fountain and the many buildings that house everything from the United Nations Geneva headquarters to the World Health Organization. That said, kids enjoying the Baby Plage, a baby-safe beach and swimming area, or folks resting under the trees in the adjoining park, are probably not thinking about those global associations. Hopefully you won’t either as you dig your toes into the sand. 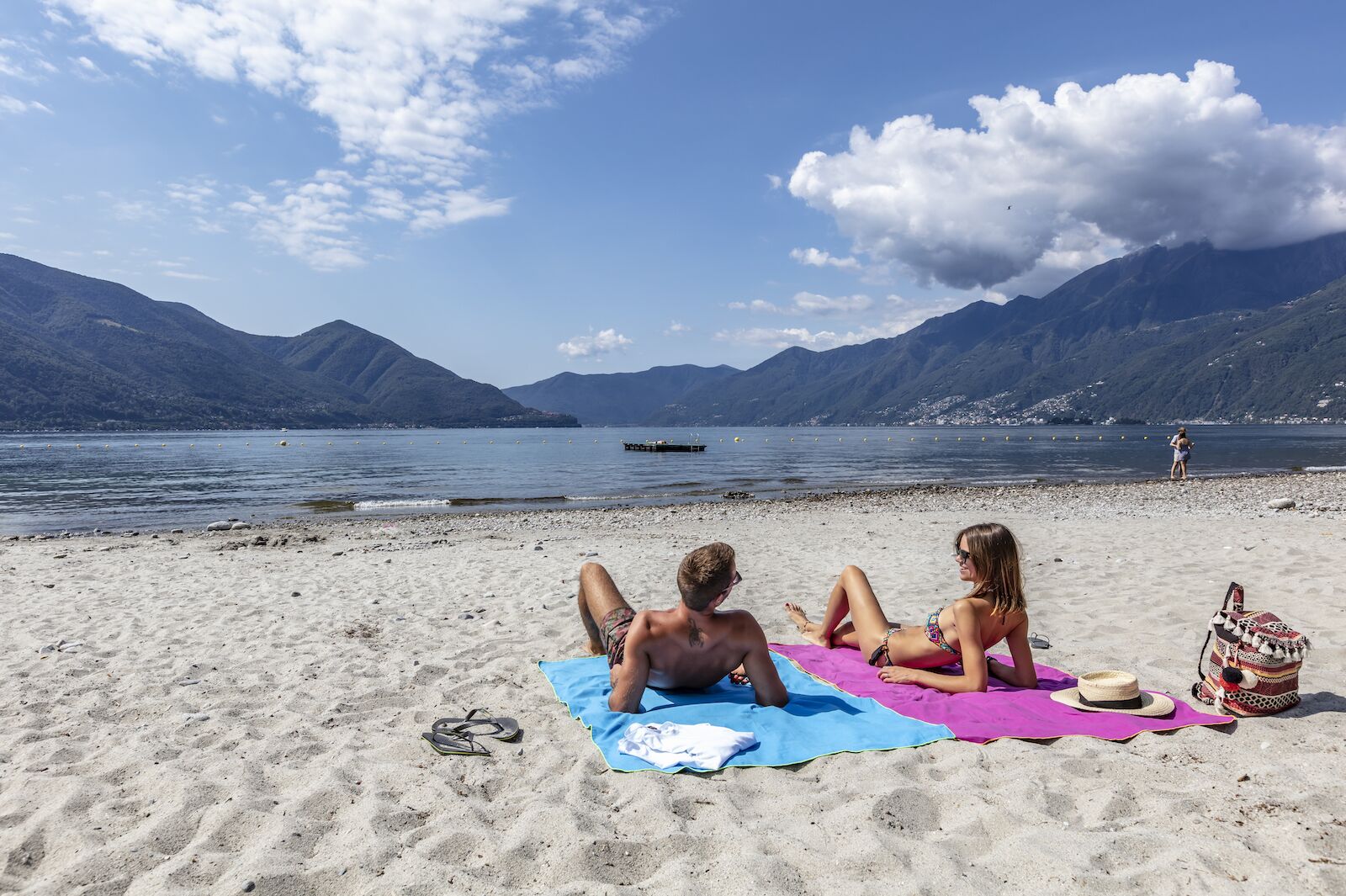 This sandy beach on Lago Maggiore in Switzerland’s Italian-speaking province of Ticino is remarkable. It stretches out over a third of a mile. You can lounge on pre-reserved chaise lounges or under a lovely tree, play beach volleyball or pingpong, or watch the kids at the playground. In the water, you can stand-up paddle, wakeboard, windsurf, or cruise in a pedal boat. Satisfy your hunger at the pizzeria. Afterwards, you can shower and change before heading home. The only thing that reminds you that you are not at an actual ocean beach is the soft freshwater. Oh, and the fact that you are surrounded by a stunning mountainscape. 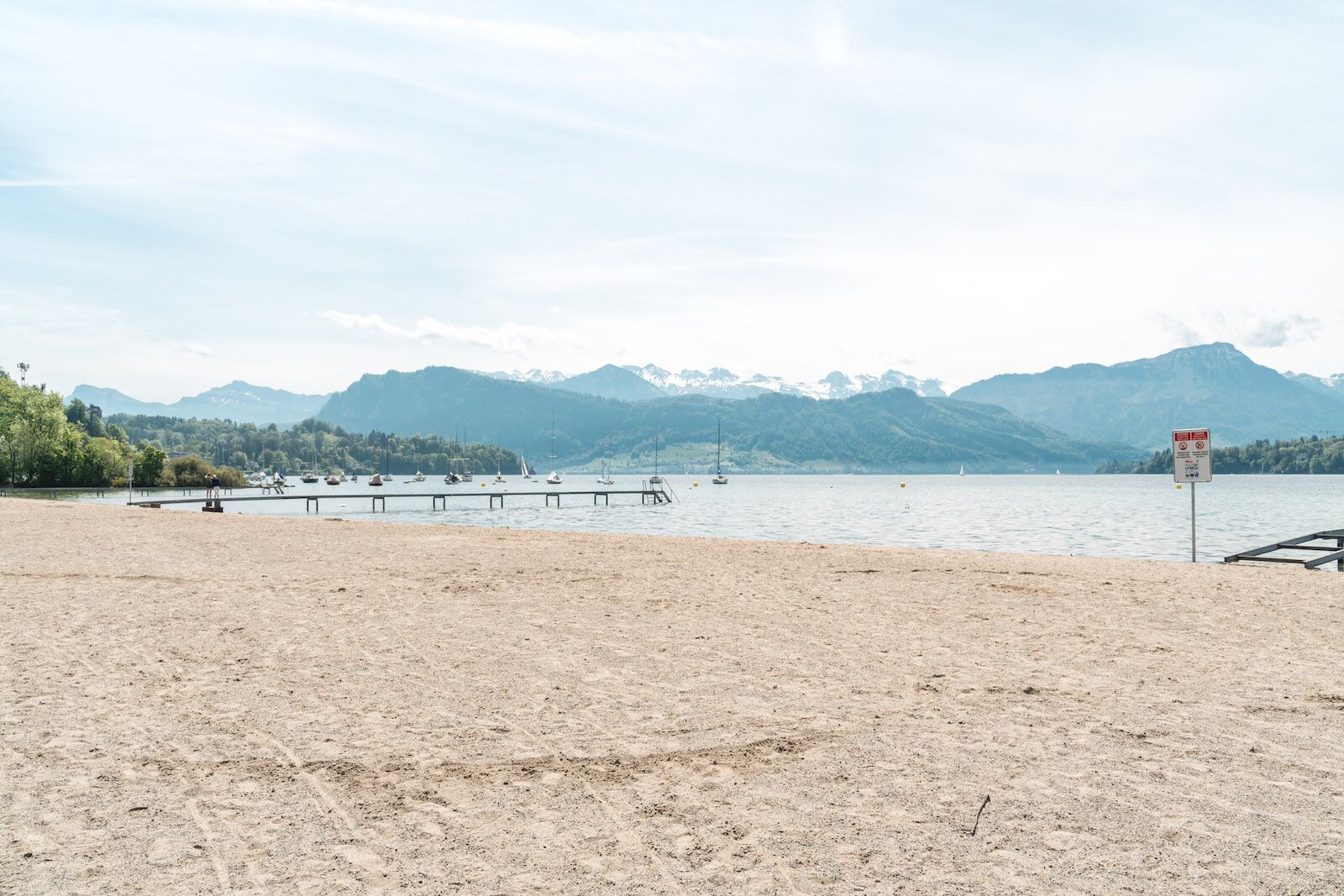 Lake Lucerne is one of the most beautiful bodies of water in a country jam-packed with them. Whether it’s the lake’s twisting shape or the fact that the mountains plunge straight down into it (or some combination of the two), it’s one worth visiting. And a great way to do that is to bring a towel to Lucerne Lido on a summer day, lay back on the sand, and take in the mountain view. If you get hot, the lake is there for a refreshing dip or a lengthy swim. You’ll also find a diving platform, floating rafts, and other fun elements. 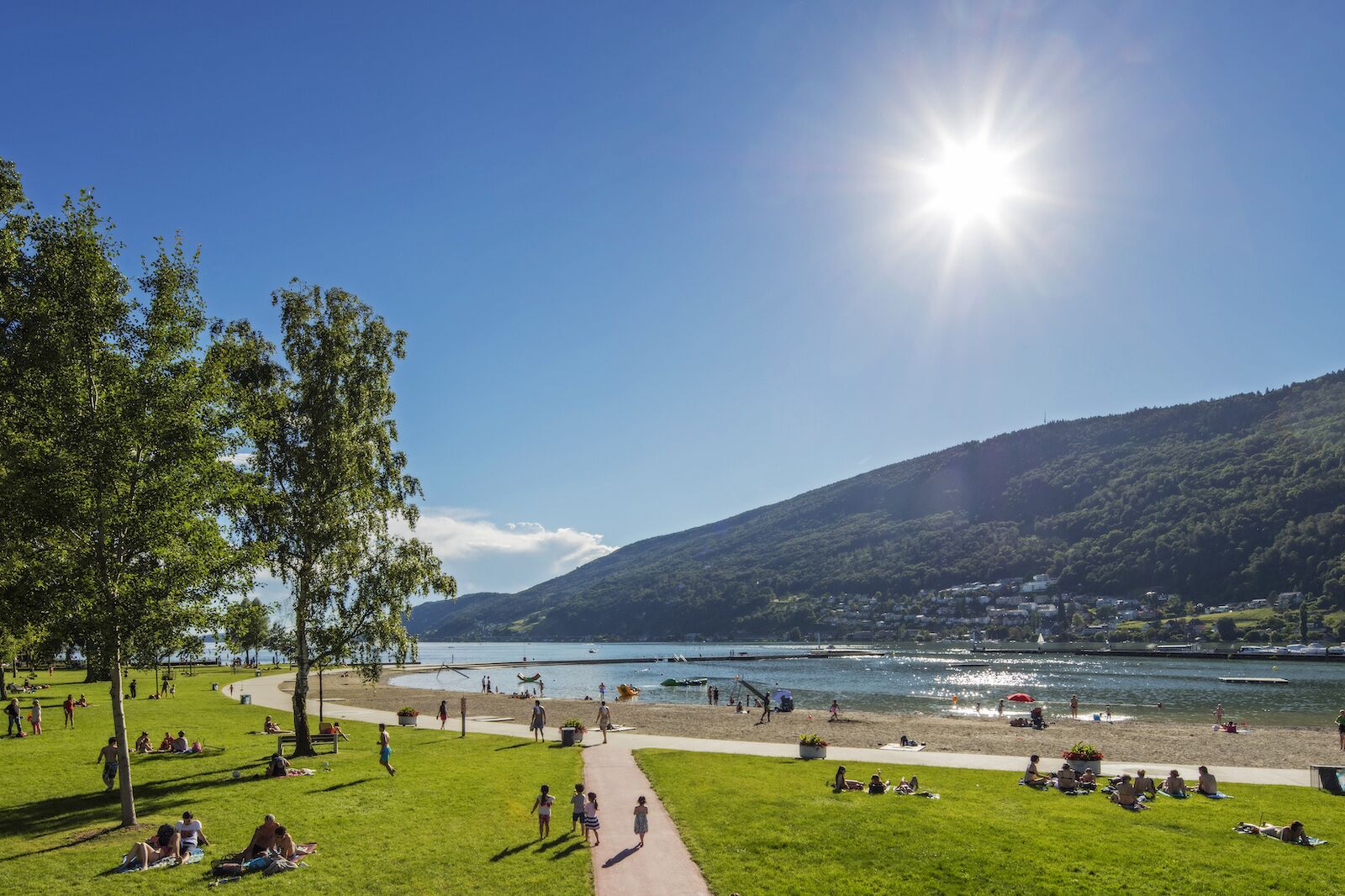 This beach located on a lake of the same name and goes all out with the summertime vibe with beach volleyball, a diving board, slides, and a full-on water park for kids. Like some other sandy beaches in Switzerland, it comes with grassy sections as well, complete with picnic tables.

TravelThe Ultimate Week in Switzerland, From Fondue To Cliff Walks and Spectacular Train Rides
Tagged
Beaches and Islands National Parks Zurich, Switzerland Switzerland
What did you think of this story?
Meh
Good
Awesome

Switzerland Is Reopening To Vaccinated US Travelers on June 28