“Have you ever had an accident with any of the people you guide on this glacier?” I asked mountain guide Yvan Volken, after we’d spent three hours exploring Aletsch Glacier – the largest glacier in the Alps. Volken has been guiding people over the massive ice sheet for two decades, and I was expecting to hear a few juicy stories.

“No, never,” he said to my relief – but also disbelief.

We’d just raced over the crevasse-filled wonder, tethered together by a rope attached to harnesses on our waists. At the head of our group, Volken had forged ahead, stepping over chasms so deep you couldn’t see the bottom and taking us over ice bridges no wider than the crampons on our boots. Occasionally, he paused to hack at a steep ice wall with his pickaxe to make it more navigable. But Volken never looked back – except, that is, when someone panicked and called out for him to stop. 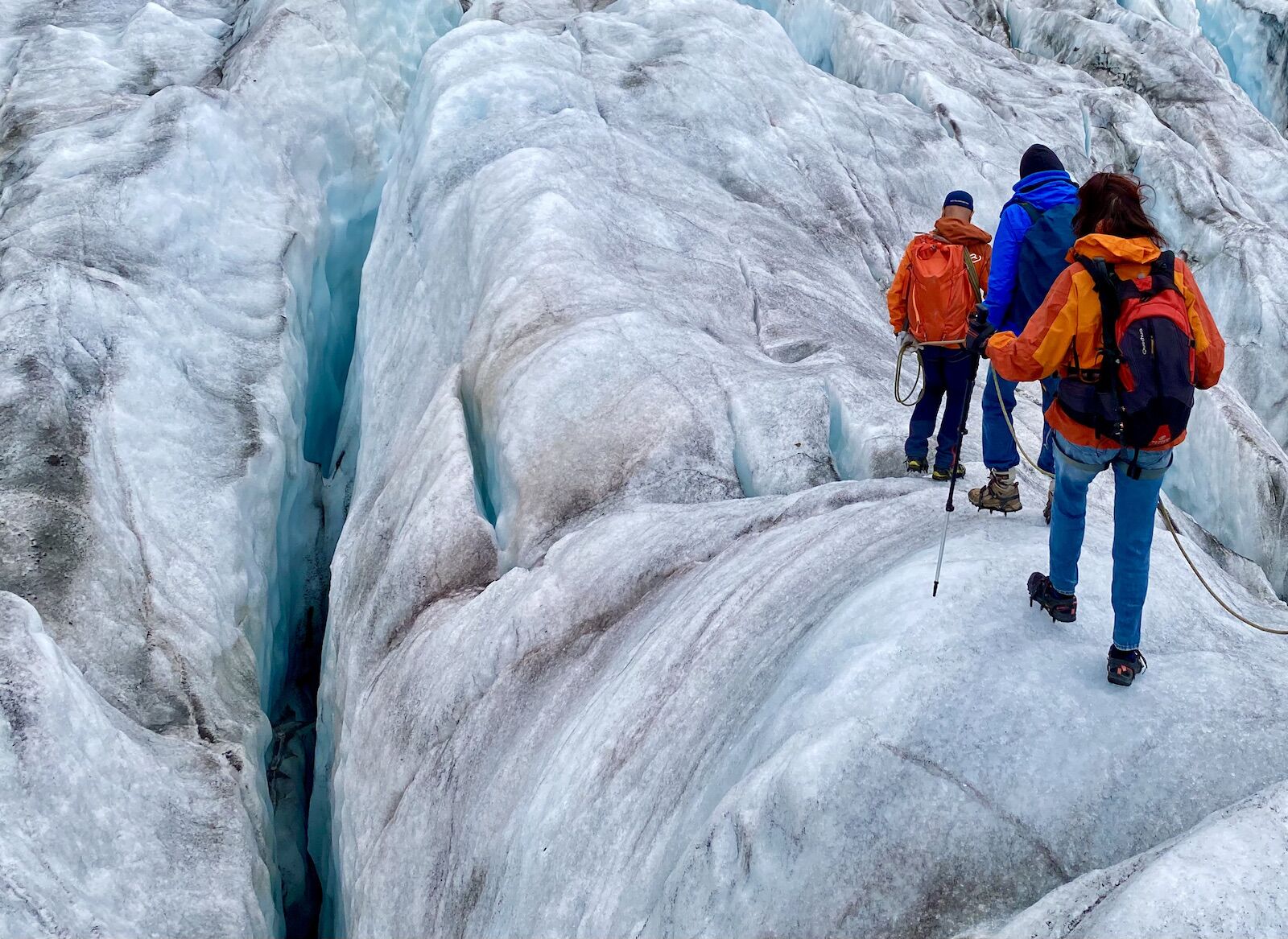 That he’d never had an accident guiding this way, struck me as impossible. But it turned out that his hair-raising methods were intentional.

“When you go slow, people don’t pay attention. They look around and take pictures with their phones,” said Volken. When you move at a faster pace over treacherous terrain, people are attuned to the trek, he said. And that makes it safer.

I could see his point. Extending 14 miles down from Switzerland’s Jungfrau Mountain region, the mile-wide behemoth, recognized as part of a UNESCO World Heritage site, was mesmerizing. It offers up bizarre, undulating ice shapes, pools of aquamarine water brighter than precious jewels, and milky vistas that stretch out of sight and reach. The temptation to keep snapping photos was hard to resist.

Yet we were roped together, and staying focused was a must. For one, we needed to keep the correct distance from our fellow hikers. Walk too close and they could trip on the rope; stay too far back, and the taut rope could yank them off balance. The call-outs to stop were when someone felt unsure about stepping over the next black void and had themselves halted, something that could cause the rest of us to fall should Volken keep pushing ahead.

Fortunately, Volken gave us plenty of time over lunch to enjoy the spectacle of the Alps’ largest glacier and take as many photos as we wanted – once we were securely in the center of the glacier in an area mostly devoid of life-threatening crevasses.

The growing and slowing of the Aletsch Glacier 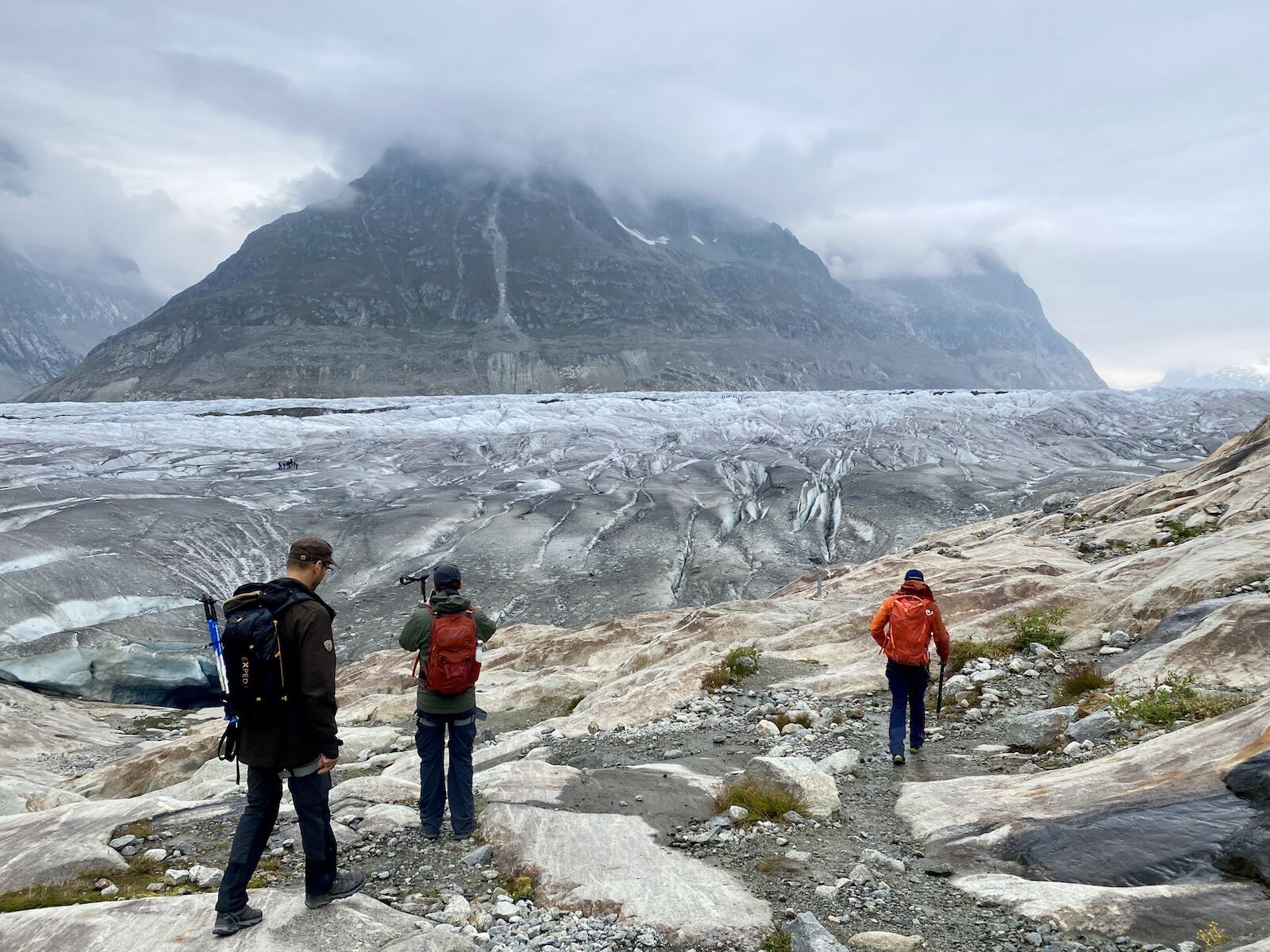 The Aletsch brings together three different firns – the snowy parts on the top of glaciers that aren’t pure ice. They’re the Great Aletsch Firn, the Jungfrau Firn, and the Ewig Snowfield. As these glaciers work their way downwards, they scrape along the mountainsides, creating moraines – lines and piles of rocks that land along the edges of the glacier as it moves and recedes. When two glaciers get near one another, the moraines can merge, creating a wide, rocky section between the newly joined glaciers.

Since the Aletsch Glacier combines three glaciers, it has two moraines running through its vertical length, kind of like steel-gray racing stripes. We ate our lunch at one of these moraines, and the views were magnificent – albeit the temperature no less frosty – as the clouds dispersed to reveal a blue sky that contrasted against the ice’s pearly hues.

Unfortunately, as is the case with other famous glaciers around the world, part of witnessing them includes observing how much they’ve receded. As we looked at the bare mountainside flanking the Aletsch Glacier, Volken showed us the widening markers of how tall the glacier had been 30, five, and even one year before. 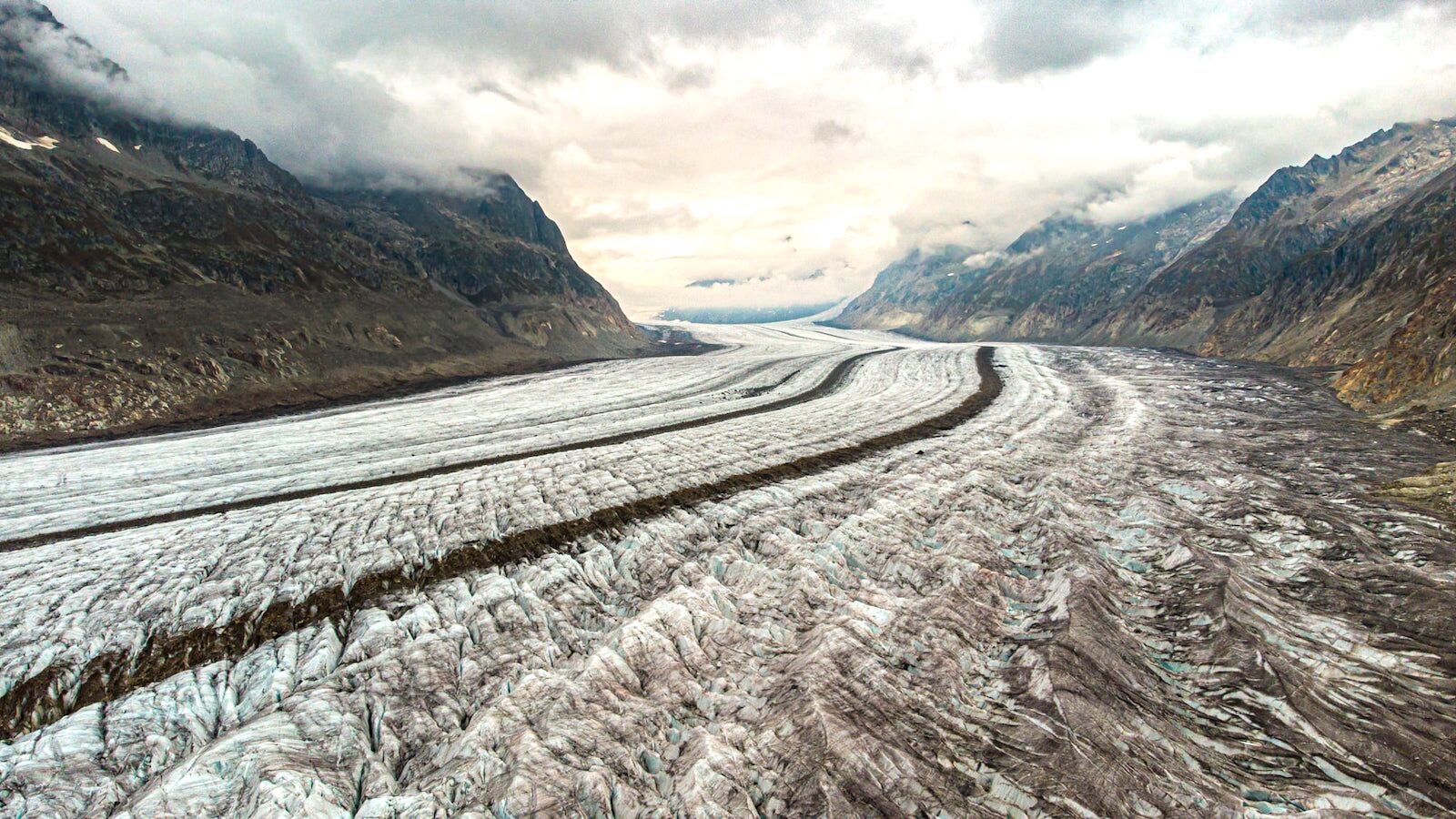 An aerial view of the glacier. Photo: Jonny Bierman

The Aletsch Glacier grew at quite a clip until about 1860, when it reached its biggest modern-day size. It was about two miles longer than it is now and had residents worried it would overtake their homes and fields. But they needn’t have fretted: the mighty glacier has been slowly subsiding for the last century and a half.

Volken, who grew up in a home that was once next to the glacier but now faces just an empty gorge, said it’s always a shock when he returns every June to start the Aletsch Glacier guiding season. I asked him how the glacier’s shrinking made him feel. He replied that it’s better not to think about it too much, or you’d want to cry.

Heading his advice, I opted to marvel at it instead. The Aletsch Glacier is more than a half-mile thick and encompasses 12 billion tons of ice. Standing in its middle, you can gaze back and see it bending upwards into the mountain peaks. The ice is thickest at the “racing stripes” since it melts slower over the rocky moraines – so much so, in fact, that researchers have contemplated covering the entire glacier with rocks to slow its eventual demise.

How to hike on the Aletsch Glacier 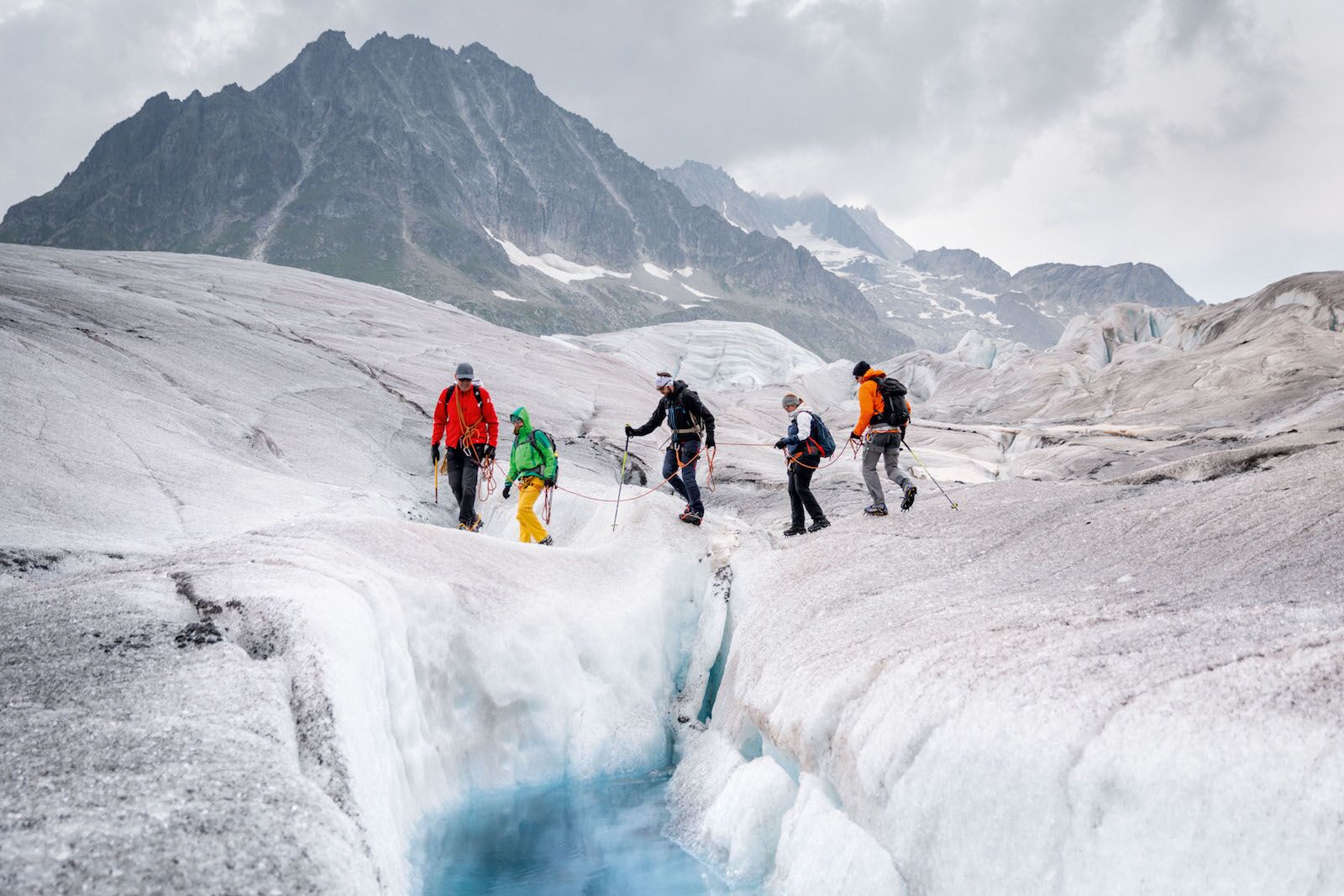 Fortunately, the glacier is still a breathtaking sight and spending time exploring it is an experience that you won’t soon forget. You can join a day-long hike like the one I did for 90 CHF (US $96) per person, which includes the gondola fare, gear, and guiding services provided by the Bergsteigerzentrum Aletsch (Aletsch mountaineering center). You’ll meet at the base of the Eggishorn Mountain, in the town of Fiesch, Switzerland, at 8:15 AM. Together, the group will take the gondola up to the mid-station to begin the hike.

You’ll hike uphill for about 90 minutes to the Gletscherstube Märjelen (Märjelen hostel). It’s a small hostel where you can grab a coffee and, more importantly, will get fitted for the harnesses and crampons needed to hike the Aletsch Glacier. The hostel used to be much closer to the glacier, but today it’s a quarter-mile uphill from Aletsch.

After about three hours on the glacier, you’ll leave your gear back at the Märjelen hostel and hike back down to the mid-station at Fiescheralp. I made use of my trekking poles on the way down, though Volken came up with a more fun way to head back down: he brought his mountain bike up with him to ride back down, giving his knees a break.

If you want to spend more time on the glacier, there’s a two-day 350 CHF ($375) excursion. The first day starts the same, but hikers will spend the afternoon trekking toward the mouth of a massive ice river at Konkordia. Two-day trekkers will sleep at the Konkordia hut and wake up for sunrise on the Aletsch Glacier before hiking back to the Märjelen hostel.

Other ways to see the Aletsch Glacier 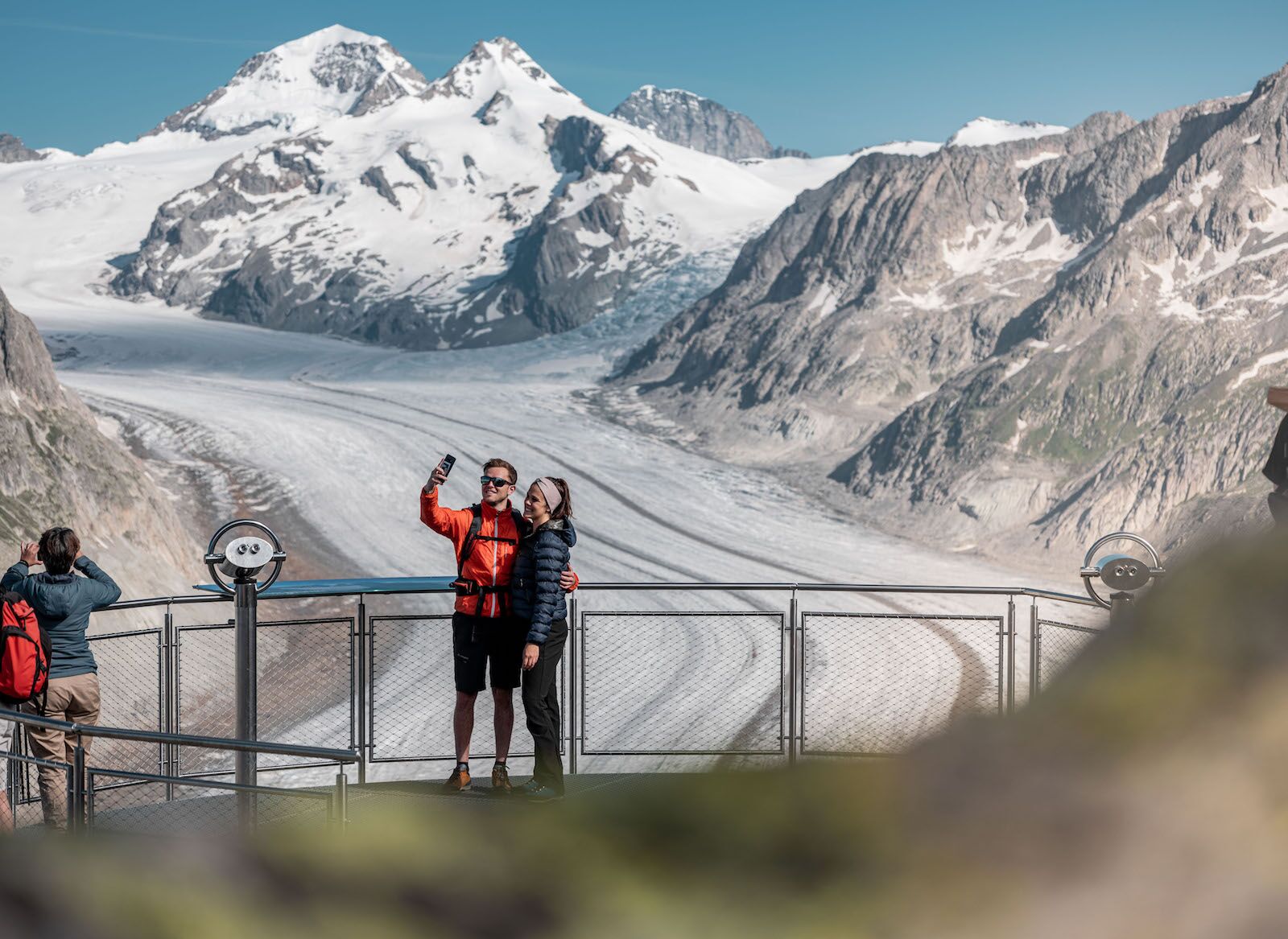 There are still ways to admire the Aletsch Glacier, even if you don’t have the time or stamina for a trek. You could take the gondola to the Eggishorn (instead of exiting at the mid-station) and walk to an overlook. For a more exciting view, go with Bergsteigerzentrum Aletsch on the 85 CHF ($91) via ferrata tour. On the route, you’ll have spellbinding vistas of the Valais’s tallest peaks and the Aletsch Glacier.

Alternatively, you could take the Jungfrau Railway up to the Jungfrauhoch, the highest railway station in Europe at a dizzying height of 11,332 feet above sea level. It’s a pricey ride, coming in at 95 CHF ($101), but you’ll get a 25 percent discount if you’ve got a Swiss Travel Pass. From there, you’ll be between the mountains of the Bern and Valais cantons (Swiss states), looking down at the Aletsch Glacier.

Lodging and when to go

We were there in September, which offered the cooler temperatures of early autumn without the blanket of snow Switzerland’s Valais region is known for. The Valais is home not only to the Alps’ largest glacier but to the vast majority of Switzerland’s tallest mountains. It boasts 41 of the country’s 48 peaks that top out above 4000 meters (13,123 feet). That includes the 15,203-foot Monte Rosa and the iconic Matterhorn. If you’re planning to hike, camp, or backpack, you’ll need to visit between early June and the middle of October. Before and after that, most huts and hotels close for a week or two to transition between summer and winter services.

And when you’re finished trekking for the day? Well, you’re in luck when it comes to food and wine as the Valais produces one-third of Switzerland’s wine and, with both German and French culinary influences, some of its best foods. All of this means that you can savor your post-glacier day with what is certain to be a good meal: perhaps a savory plate of pasta, a glass of Valais pinot noir, and some luscious Swiss chocolate. You can talk about your day and maybe even look at all the photos you took on the glacier – but only when you were safely stopped, of course.

Ski & SnowIceland’s Ice Caves Could Last for Decades — or Be Gone Next Month. Here’s How To See Them.
Tagged
Hiking Outdoor Ski & Snow Switzerland
What did you think of this story?
Meh
Good
Awesome

Near Zurich, Switzerland, World-Class Skiing Is Just Another Saturday in Winter

In Switzerland, Turnips, Not Pumpkins Mark the Fall Season

From Fondue To Raclette, the Coziest Winter Foods Come From Switzerland

How To Spend a Weekend in Zurich Without Going Broke

The Ultimate Week in Switzerland, From Fondue To Cliff Walks and Spectacular Train Rides