With its highly developed network of trails that make the Alps accessible to trekkers of varying abilities, Switzerland is one of the world’s best-known hiking destinations. Though tackling steep inclines to reach breathtaking views may very well be the reason for a trip to Switzerland, there’s even more to experience between hikes. Getting out into the mountains is best done by staying in a mountain town, and we can’t think of a better one than Charmey in the country’s Gruyere region. Here’s how — and why — to base yourself in Charmey when exploring the Swiss Alps.

Charmey is just a train ride from Geneva. 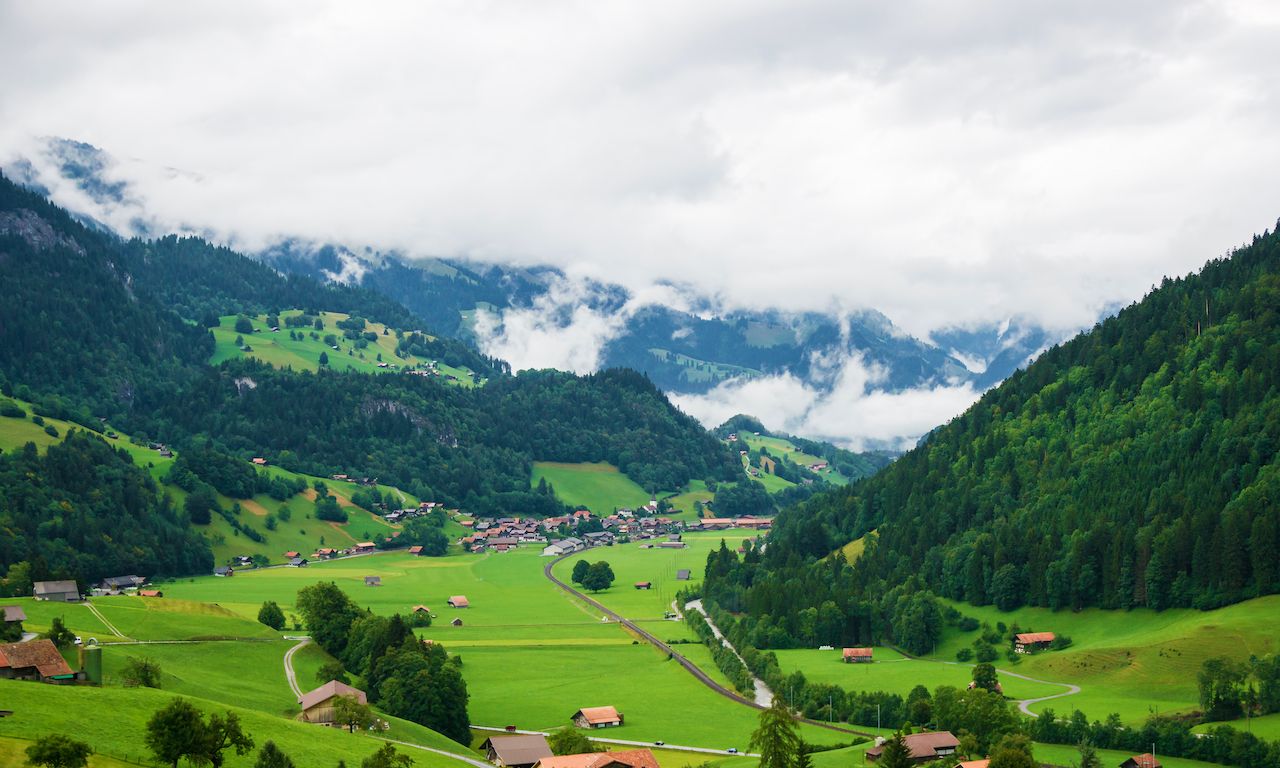 The two main international airports in Switzerland are located in Zurich and Geneva. Charmey is just a two-hour train ride from Geneva, making it easily accessible to travelers coming in by air. The train also connects with routes coming in from outside of Switzerland, ideal for when you fly into another European country and make Switzerland one stop along your trip.

For the best views of the country’s green, lake-dotted countryside, reserve a window seat for the ride in. There are a number of sights along the trip between Geneva and Charmey worth stopping for, as well. For example, Chillon Castle on Lake Geneva offers a stunning view into Switzerland’s history. The site itself has been occupied since the Bronze Age, between 3000 and 1200 BC. Surviving three major periods in regional history, stretching from the Savoy period in the 12th century to the modern Vaudois period, the castle served as a fortress strategically placed between a major point of movement between northern and southern Europe.

Charlie Chaplin is highly celebrated in Montreux, where he had a home in his later years, making the city an entertaining afternoon respite any time of year — though the city is renowned for its jazz festival each July. The Chaplin’s World museum is a must-do while in town. If you happen to make it in September, the annual Desalpe Festival sees cows marched through town to honor their annual pilgrimage from the hills to the plains. This is a festival to celebrate the changing seasons, but, because it’s Switzerland, there’s plenty of cheese going around.

Charmey is much smaller than Interlaken. 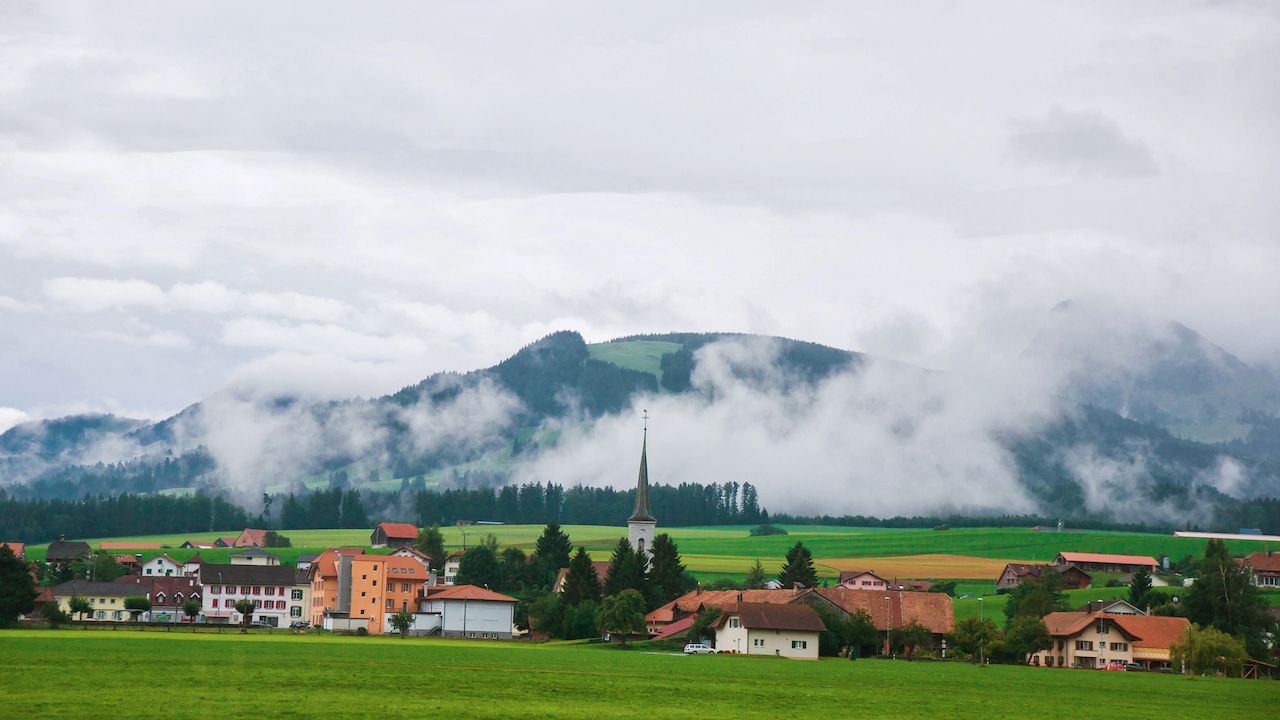 Though smaller than the major cities of Geneva, Bern, or Zurich, Interlaken is still a large mountain village that sees year-round traffic as a gateway to hiking, via ferrata, paragliding, and cycling. Charmey acts as a smaller hub town that offers access to many of the same adventure activities while lacking the intrusion of international companies. It’s easier to stay and eat at locally owned establishments in Charmey, most of which will be walkable from your lodging. Of those, the hot spots in town for Swiss fondue are L’Etoile and the Brasserie inside the Hotel Cailler.

Beyond the trails, Charmey’s cheese offerings are on point. 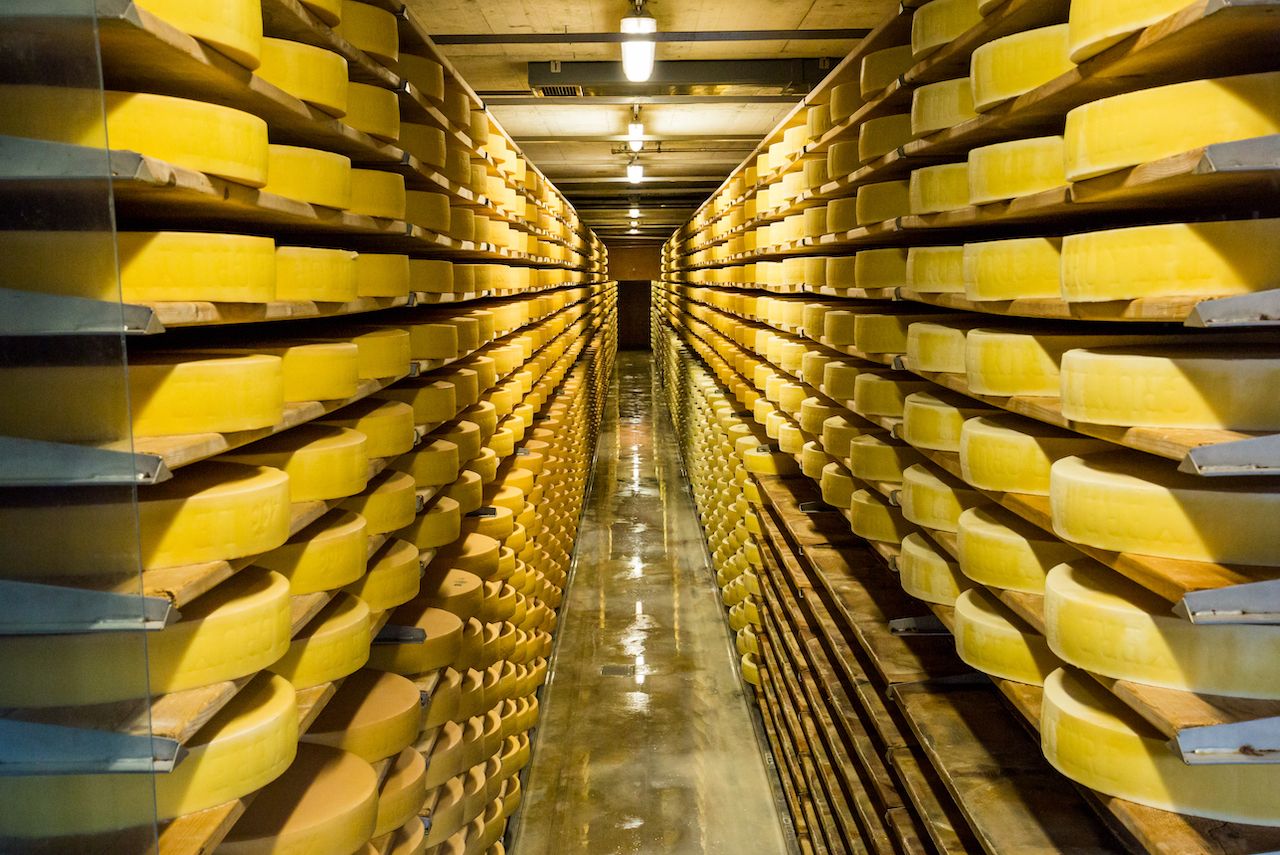 Charmey is the perfect central headquarters for off-mountain attractions in the Gruyere region, as well. Gruyeres Castle is a highlight in the fairytale-like city of Gruyeres, for starters. Of course, the most authentic Gruyere cheese can be found in its namesake canton and city, but for the easiest experience, dine at a local restaurant and skip the raclette for a hearty, gruyere-filled chalet soup, a local specialty.

Next, visit the cheese caves in Charmey to learn how local cheeses are made. Not only does this afford you the freshest cheese of your trip — sorry, Paris — but it’s also the best way to support the local union of independent dairy farmers working to keep their traditions alive for another generation. Don’t leave your hiking boots at the hotel, however, because these farms are traditionally up in the Alps where the cows graze during the summertime, and some of them can still only be reached by foot or horse.

Indulge your sweet tooth at the Cailler Chocolate Factory, one of Switzerland’s oldest chocolate makers. After learning how chocolate is made, visitors see the candy-making process in action and indulge in delicious samples ranging from the company’s standard chocolate to luxurious truffles made with white, milk, and dark chocolates.

Both road and mountain bike routes are available. 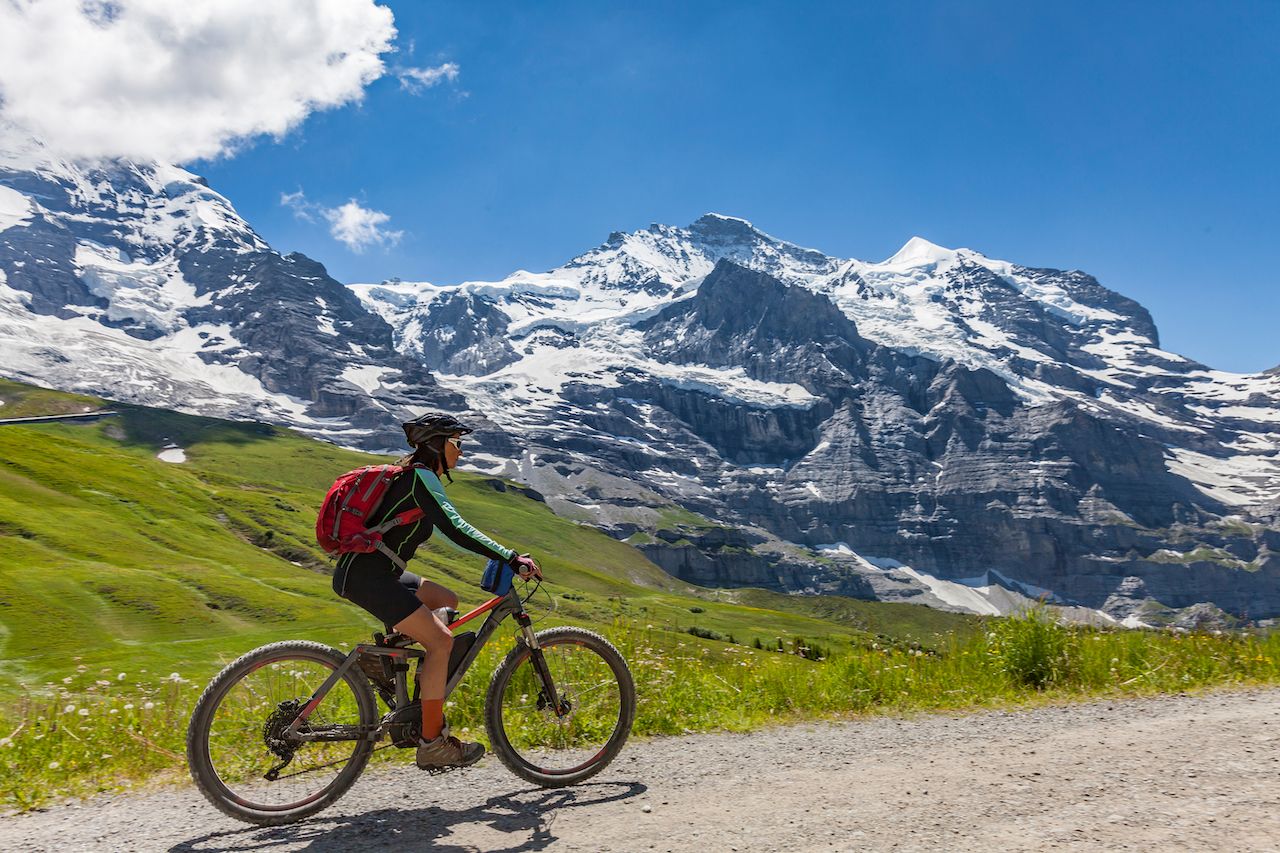 After you’ve sufficiently stuffed yourself, a bike through the Charmey Valley is the perfect way to burn off the sugar rush. The area offers road and mountain biking, both with stunning mountain views and doable in day excursions from your lodging in town.

On a mountain bike, follow the Lakes Route, or the route nine signs, and ride through thick forests that open to sweeping views of the valley and lake below. The full route takes you from Lake Geneva to Lake Lucerne, but from Charmey you can join the trail for a portion of the ride. To find the ideal mountain bike route for your group, use the Trailforks App, which shows trails throughout the region and has detail on length, difficulty, and current conditions.

If you’re on a road bike, you can add a cultural destination to your ride at the home of one of Charmey’s remaining poya artists. Poya is a traditional folk art that takes the shape of painted wood depicting the return of the cows from their summer grazing in the Alps to their winter homes in the valley. Dressed in traditional costume, the artist proudly displays her work, which you may also find throughout the valley, hung in its traditional place: above barn doors.

If rentals and gear are needed, stop into Castelle Sports on Route du Verdel 2, which can also offer advice on current conditions and make recommendations based on experience level. The shop offers guided tours of the area’s trails and roads, and they’re not shy about pointing you towards a post-ride pint, either.

There are 13 mountains to summit in the surrounding valley. 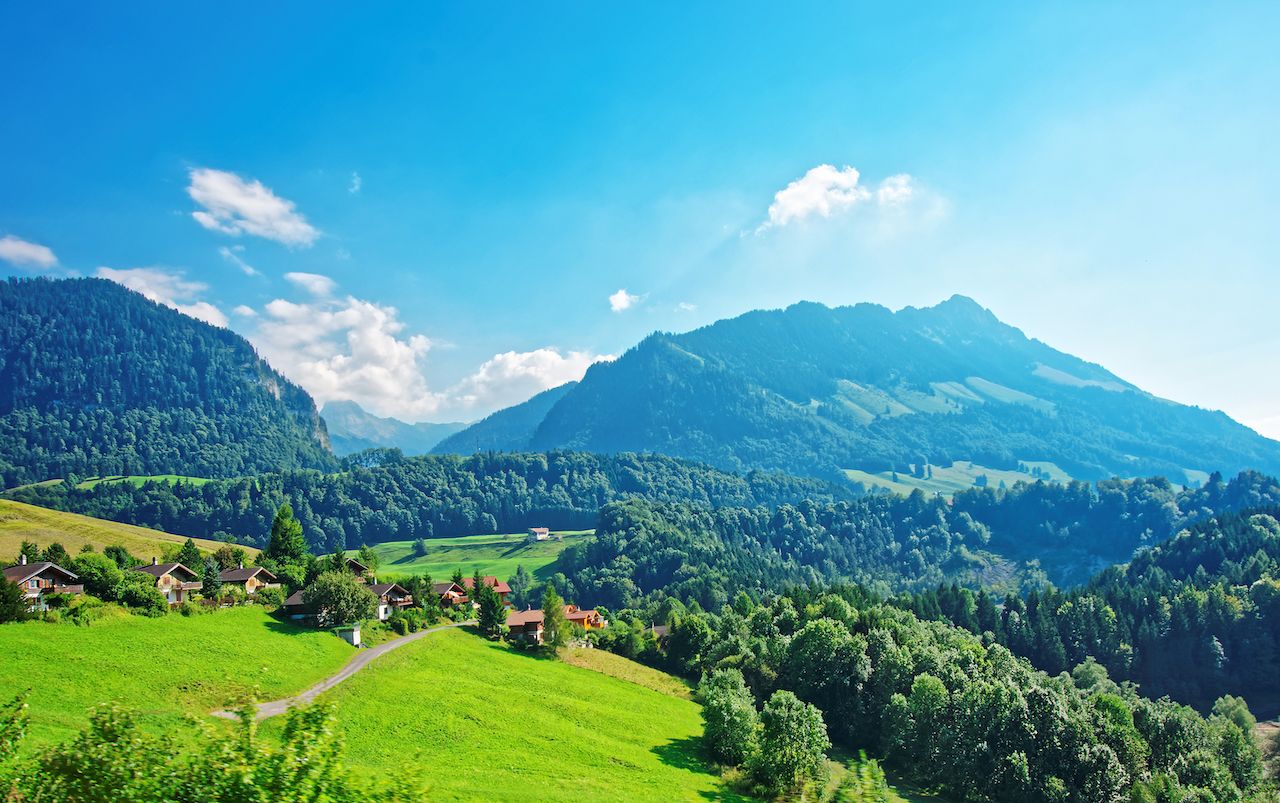 With access to the Alps across much of Switzerland, Charmey is the ideal place to reach trailheads of varying difficulties for both day hikes and backpacking excursions. While more people are choosing to conquer the mountains on the two wheels of a bicycle, hiking remains the classic choice for taking in the natural beauty of the region. With 13 peaks in and around the Charmey Valley, active travelers and hiking enthusiasts will find Charmey to be the perfect base for bagging peaks, as well as an ideal city for recovery. Apart from the quiet atmosphere or a peaceful day of paragliding to relax after long days of physical exertion, the city’s reigning resort, Hotel Cailler, is home to the best method of recovery available: a spa.

Right near town, the Lake Montsalvens trail is about six miles through what’s called the Prealps. Most of the trail is flat, though it does ascend about 800 feet if you undertake the entire journey. The Breca Valley and Les Recardetes hike starts in nearby Schwarzsee and is the ideal day hike for the semi-serious trekker. Over about four hours, you’ll cover 6.2 miles and ascend 2,800 feet up the jagged peaks of the Les Recardetes mountains, with views looking back over the valley if you manage to pull your eyes off the mountain. 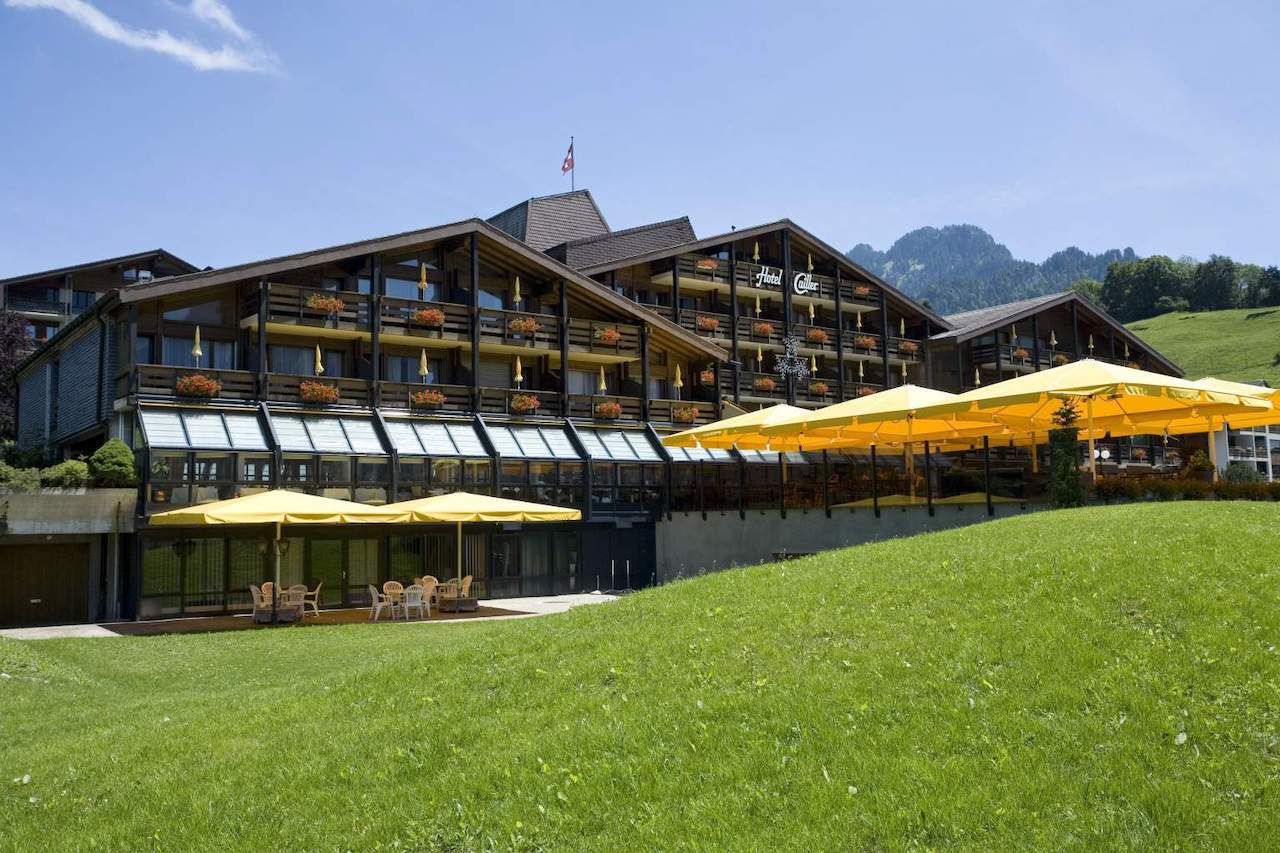 Of course, you’ll need somewhere to crash while in town. Charmey has a range of options depending on your price point. For budget lodging, try Gruyere Rooms B&B, just south of town, where rooms run about $120 per night but are quite comfortable. If convenience to town and trail is priority number one, Hotel Cailler is your go-to. Rooms here start at $223. The chalet-style resort sits on a hill overlooking the city and valley, which its spa also looks onto through floor-to-ceiling windows.

The spa is connected by an underground tunnel to the hotel. Hotel guests and day-pass holders can enjoy its many pools with jets, relaxing bubbles, and waterfalls of varying pressures. Though the hotel is not affiliated with the Cailler Chocolate Factory, it is known for its double cream meringue confections, which are a very traditional local dessert served with fresh berries and more double cream.

Lifestyle5 Things US Cities Can Learn From Bern, Switzerland
Tagged
Hiking Outdoor Insider Guides
What did you think of this story?
Meh
Good
Awesome