Standing right in the center of old Hyderabad, in the state of Telangana in southern India, the majestic 16th-century Charminar monument acts as a crown to the city built by the Nizams. Hyderabad is often referred to as the City of Nizams, referring to its former monarch, the Nizam of Hyderabad. Unlike many old cities, this metropolis of nearly eight million has transformed itself with the times. Its core blends the cultural history of southern India with modern technology, art, and fascinating architecture, and its tech-y aspects — including a free, 3,000-hotspot Wi-Fi network known as the “Hy-Fi” — have helped the city build a name as an IT capital. Yet the old city still shines enchantingly through its architecture like jewels on a crown, and it remains the most important aspect to see on a trip here. These are the places you must see in this ancient city.

Start by walking around the Charminar. 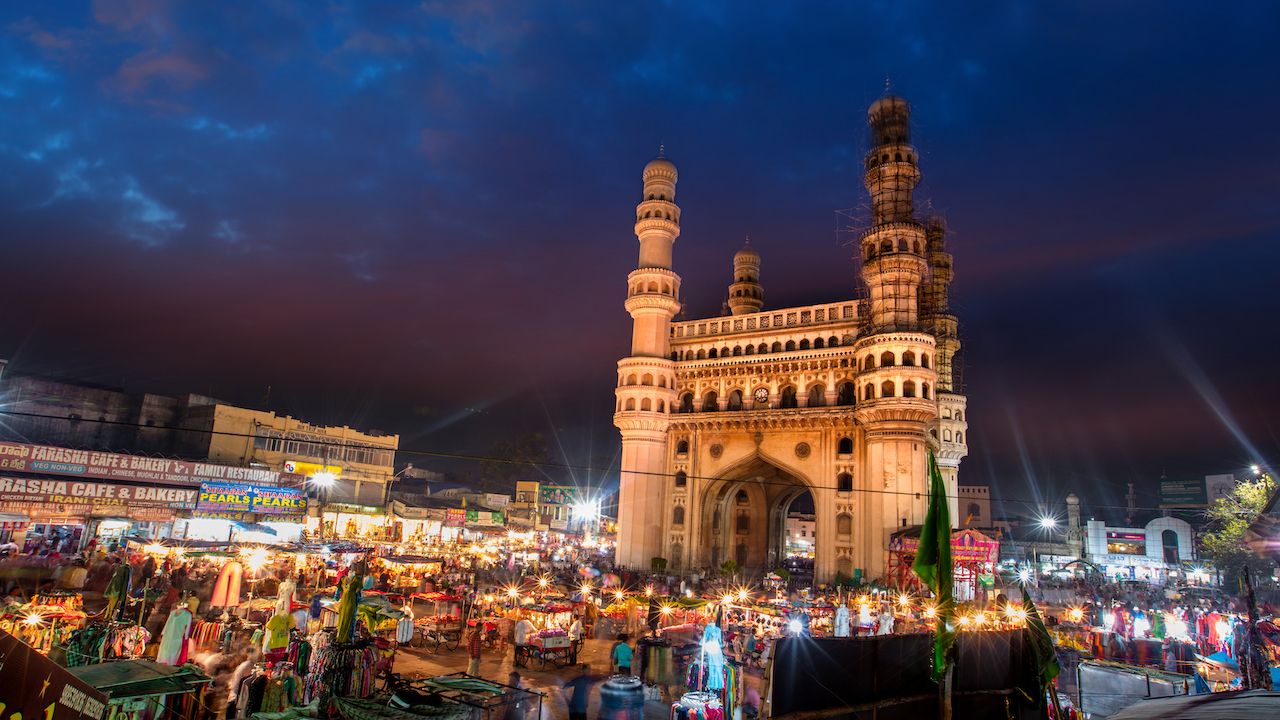 Constructed by Sultan Muhammed Quli Qutb Shah in 1591, Charminar means four turrets (char meaning four and minar meaning turret) in reference to the beautifully carved pillars that enclose spiral staircases for visitors to climb to the top and catch a view of the maze-like lanes that lead to the Charminar. On one side you will be able to see the stunning Mecca Masjid. The structure is open from 9:30 AM until 5:30 PM daily and costs about $1.50 to enter for foreigners.

The Charminar wakes with the city at dawn to the smell of fragrant Irani chai and freshly baked Osmania biscuits. This is an ideal time to visit the Charminar, not only because you can take in the sun rising over the monument but because you can then stop by the nearby Nimrah Cafe and Bakery to taste the biscuits firsthand. Soon after sunrise, the streets bustle with bangles, traditional Indian bracelets typically made of metal, wood, or glass. Walk your way around the Charminar toward the Laad Bazaar. Jewelry sellers on the street will promise you their pearls are original, but your best bet for authenticity is to head to the shops inside the bazaar, where exquisitely crafted pearl jewelry is sold. The bazaar is open from 11:00 AM to 11:00 PM every day. 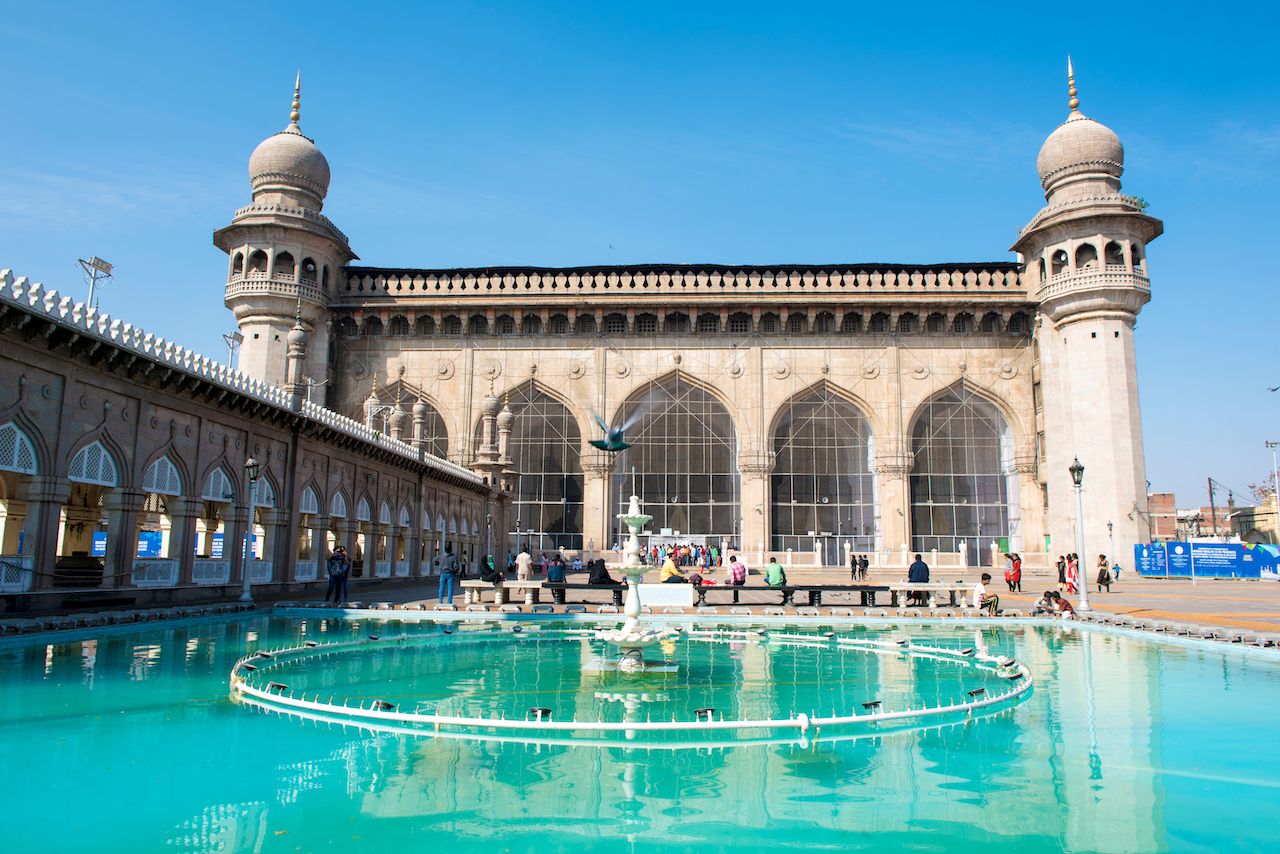 The construction Mecca Masjid was started by Sultan Muhammad Quli Qutub Shah in 1614. It is one of the oldest mosques in India with a main hall capable of hosting 10,000 worshippers. Walk around the mosque to appreciate the intricately carved minarets and arches. Find the right angle and the cleansing pond reflects the mosque in a mirror effect. The facility houses the tombs of rulers from the Asaf Jahi dynasty who emigrated to the area from what is now Uzbekistan in the late 1600s. While it is free to enter the courtyard, non-Muslims are not allowed into the mosque and must be dressed appropriately in the courtyard area. 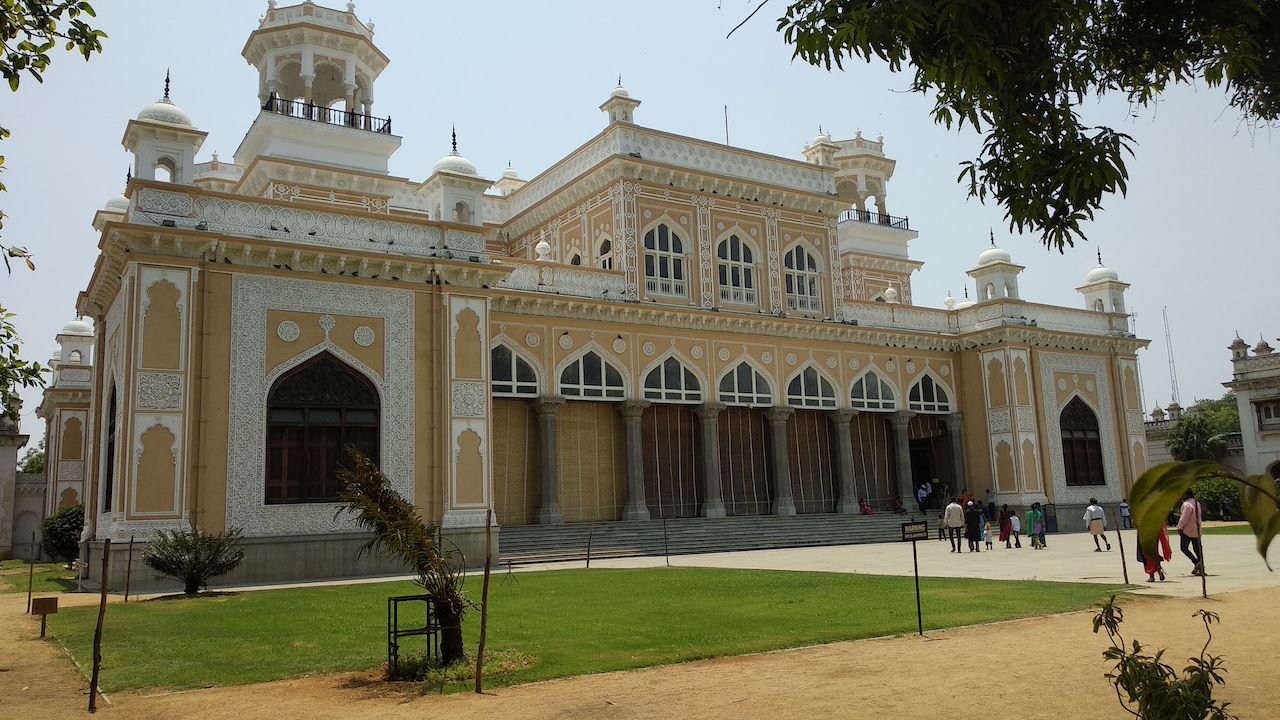 Just a short distance away is the Chowmahalla Palace. Built in the 18th century, the Chowmahalla complex’s architecture is said to resemble the Shah Palace of Tehran in Iran. The largest palace in the complex, Aftab Mahal, is a two-story building visible from the outside. However, it is the Grand Durbar hall that stands out the most as you approach the palace. On the outside, large arches and Mughal domes intricately decorated with Persian art adorn the building. Inside, stunning crystal chandeliers hang under intricate ceilings with the marble royal seat in the center.

In its heyday, 7,000 attendants were employed to maintain the complex. Outside, the lawns are beautifully landscaped while a huge water fountain can be found right in front of the palace. The clock in the courtyard has been ticking since the palace was fully constructed. The galleries of the palace display an interesting collection of clothes, weapons, furniture, coins, the Quran, historical photos, and more. As a foreigner, you can see the palace for about $2.85 per person, and if you’re willing to pay an extra $0.70 for permission to take photos or $1.40 for permission to film using a video camera, you can even document the experience, though tripods are not allowed. The palace is closed on Fridays and national holidays.

Learn about the cultural history of the Indian subcontinent at the Salar Jung Museum. 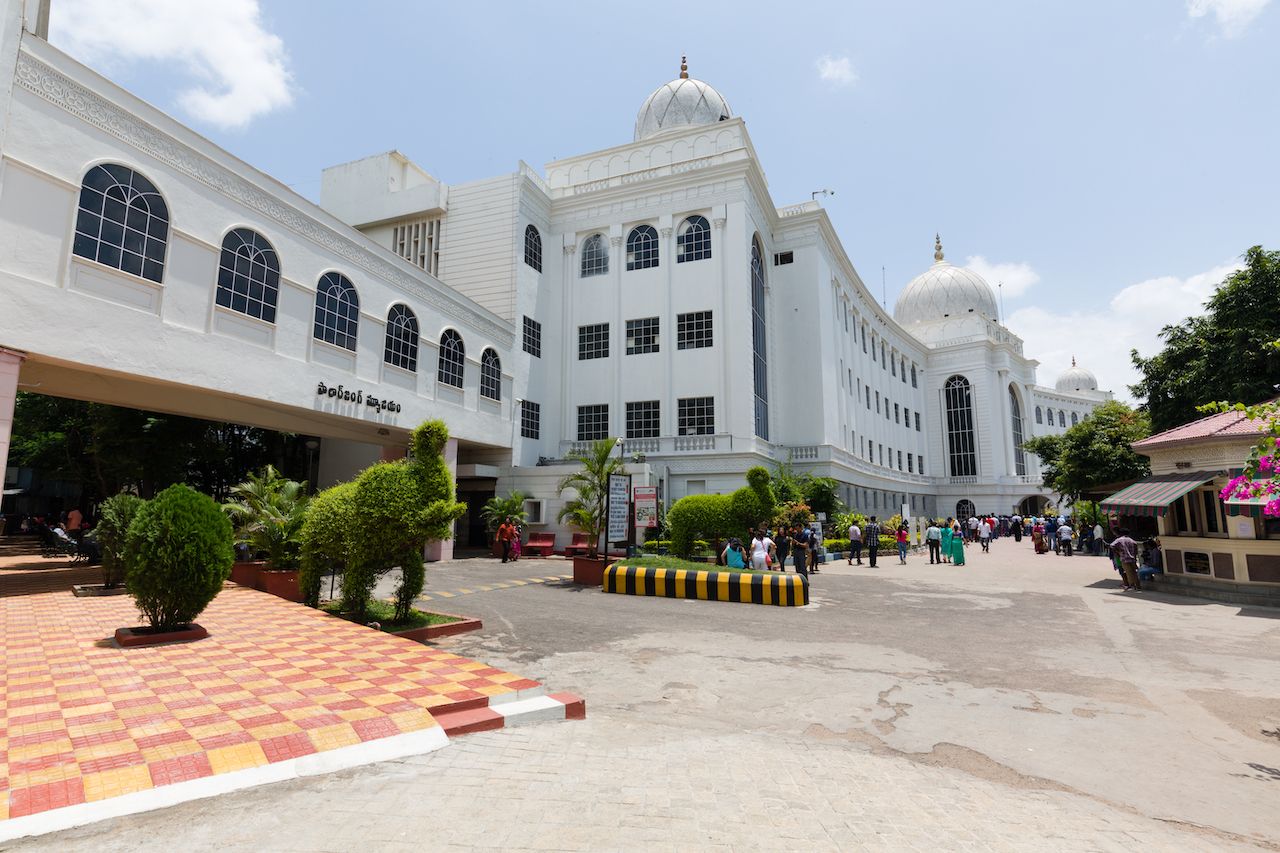 The Salar Jung Museum is one of the world’s largest one-man collections and the third-largest museum in India. Most of the collection was collected by Mir Yousuf Ali Khan, popularly known as Salar Jung III. He was an inspiration to many Indians and historians, dedicating his life and wealth to collecting antiques and artifacts from India and all over the world. His collections were endowed to the museum after his death. Some 43,000 artworks, 9,000 manuscripts, and 47,000 printed books are spread across 38 galleries on two floors of the building. The galleries house different collections of unique artifacts and artworks ranging from ivory-carved objects to rare manuscripts and art.

Among the most notable sculptures on display is the “Veiled Rebecca,” which was created by Italian sculptor Giovanni Maria Benzoni in 1876. The museum also features Raja Ravi Varma paintings that are classified as priceless, miniature Mughal paintings; the Mughal Emperor Aurangzeb’s sword; and even daggers belonging to Emperor Shah Jahan and Nur Jahan. However, the most popular item in the museum is a 200-year-old British musical clock, where a miniature toy figure comes out and strikes the gong every hour. The museum is open from 10:00 AM to 5:00 PM, except on Fridays, and costs just over $7 to enter with an additional fee for camera access.

Make your way down the biryani trail. 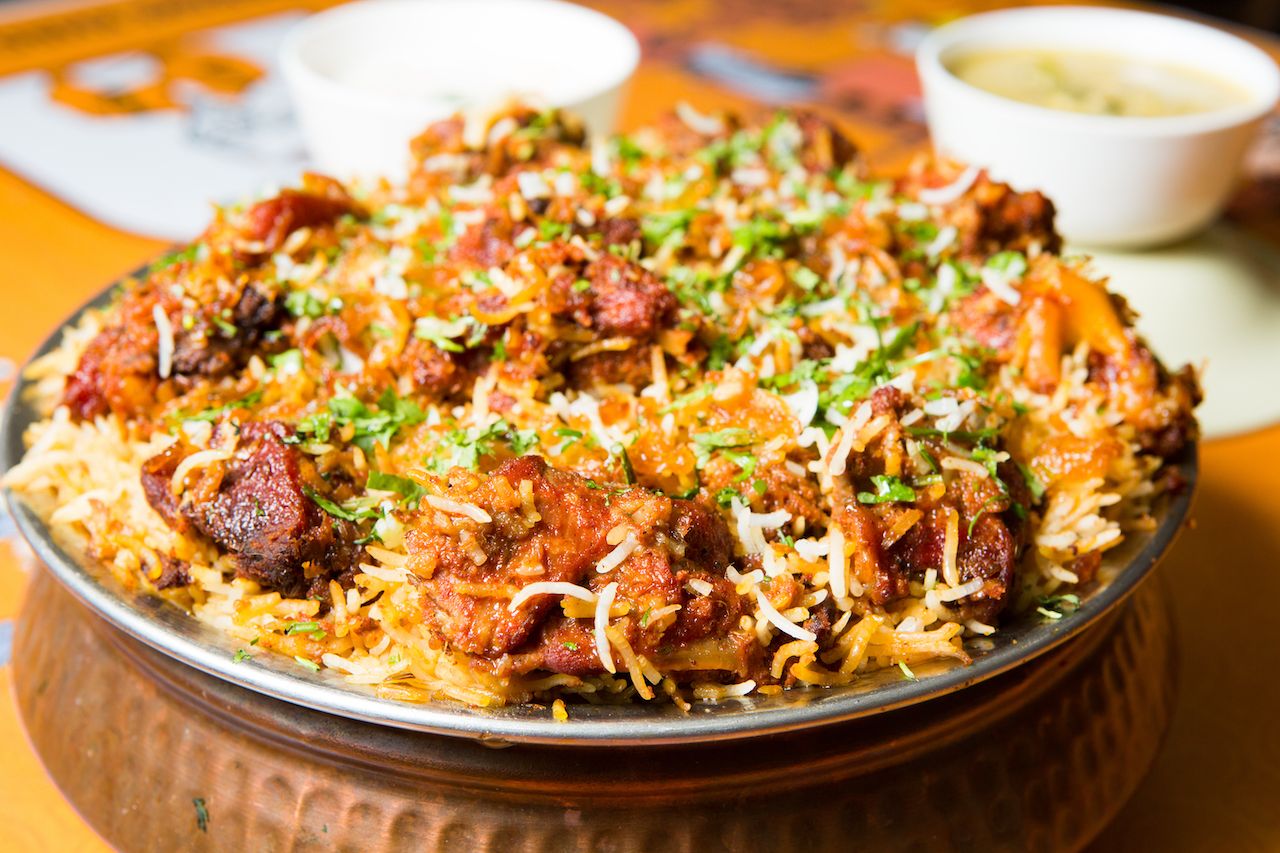 No trip to Hyderabad is complete without a taste of the city’s most exquisite dish: the Hyderabadi biryani. A whiff of the dish will have you salivating, so good luck leave without several tastings under your belt. Fortunately, the city is itself a trail of biryani from one side to the other, and you’ll never have to walk far to satisfy the craving. Biryani is a rice dish cooked with spiced chicken or mutton that has been sealed in a container for a long period of time. While Hyderabadis as a whole cannot agree on which is the best biryani, Paradise and Bawarchi stand out as crowd favorites. While Paradise has branches across the city, Bawarchi only has one restaurant located at RTC X Roads.

Art + Architecture7 Amazing Monasteries To Check Out in Ladakh, India
Tagged
Culture Trip Planning
What did you think of this story?
Meh
Good
Awesome