When you start planning your trip to Costa Rica, you may hear something about a “rainy season.” And it may have you asking if there’s a time of year that is off-limits, or not recommended, for a visit to this spectacular country. The short answer is no. It is always beautiful somewhere, since Costa Rica has several microclimates, from its tropical jungles to its mountaintop cloud forests to its dry northwest. So rather than worrying about a rainy season, look for the time of year that is optimal for the type of activities you want to do. Here are the best times to visit Costa Rica for every type of traveler.

Best time to visit Costa Rica and hit the beaches 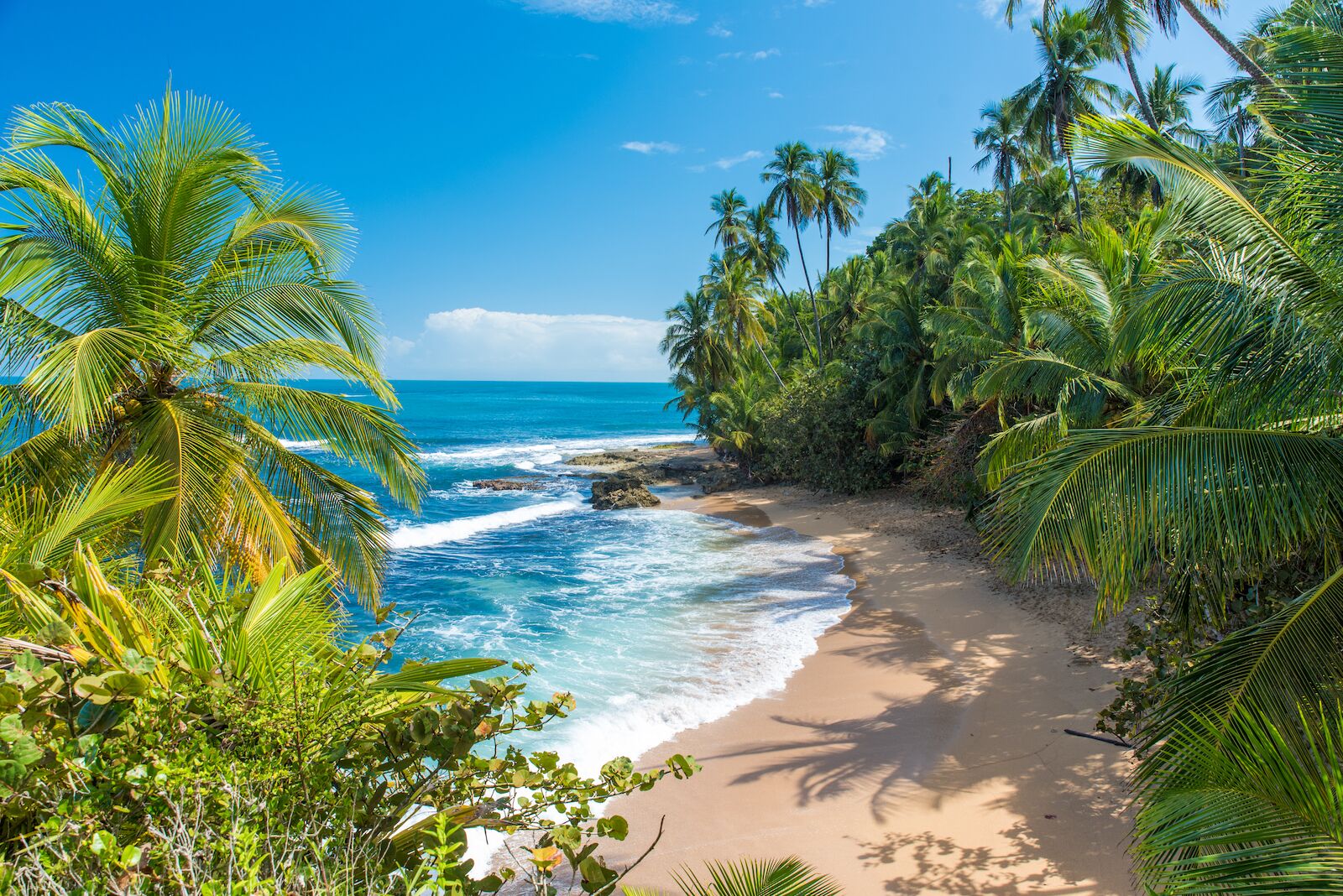 If your top priority on your Costa Rican vacation is relaxing on a soft sand beach, the weather is paramount. The aforementioned rainy season lasts from May through November on the Pacific Coast. So if you want to gaze out on the water at a lonely cove like Tamarindo’s Playa Conchal — or any one of Costa Rica’s other stunning Pacific beaches — then December through April is the time of year to do so.

Now let’s get specific. If you have a choice between December or January to spend time on Costa Rican beaches, choose late January as it will be less crowded and prices will have come down a bit. The least desirable months to hit a Pacific Coast beach are September and October. By this time, a beach like Corcovado Park’s Playa Llorona, which means “crying beach” for the waterfall that crashes down onto the sand, might be really crying water — as in daily buckets of rain from the sky. And you might not get there at all, if rivers are so swollen that roads get washed out.

You read that right. The rainiest two months on the Pacific Coast are the driest on the Caribbean side, making September and October a nice time to park yourself in Puerto Viejo and explore one of the lovely beaches nearby. The great thing about visiting in these two months is that you’re likely to find the cheapest flights, since everyone else has been told to stay away. 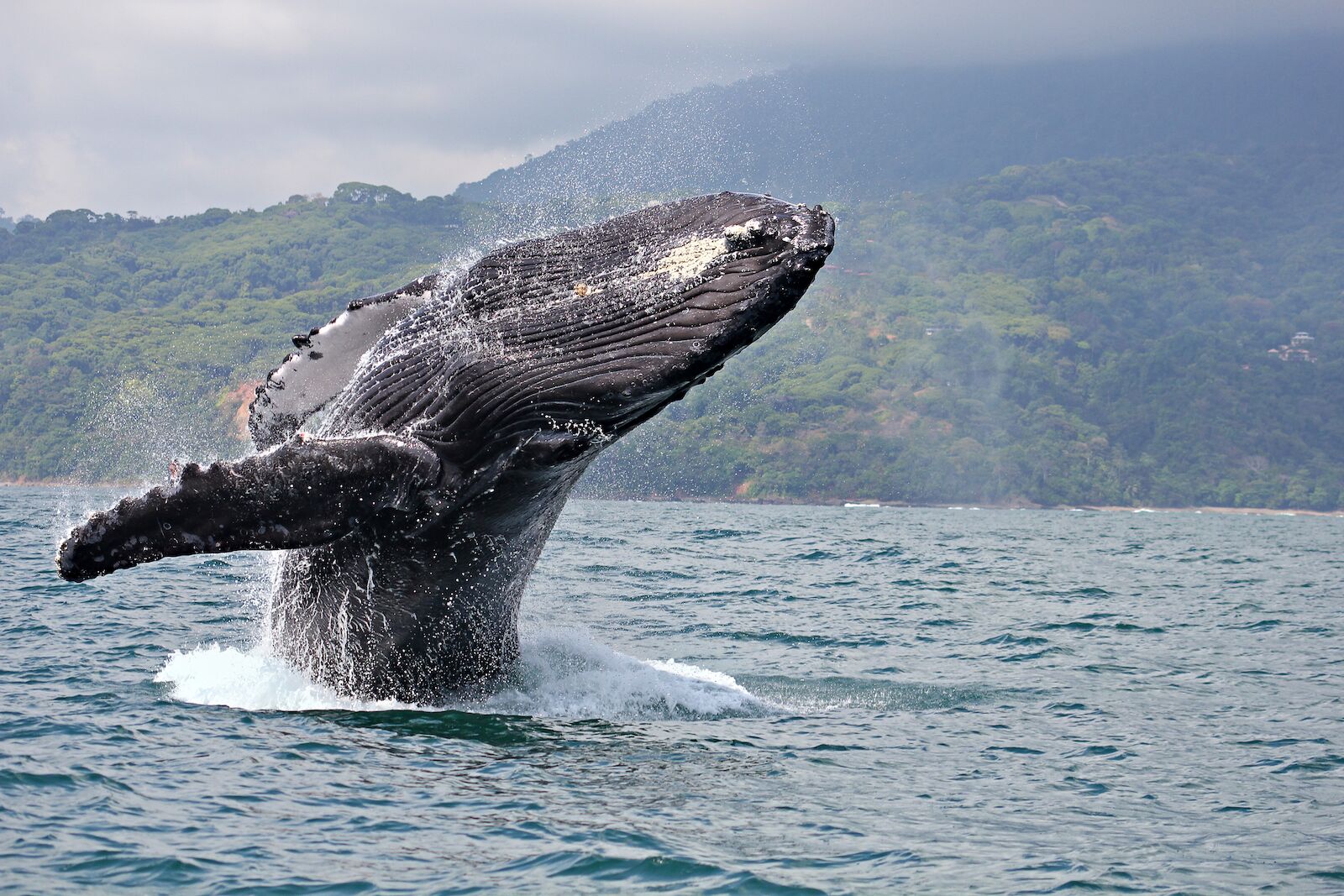 If you’re averse to rain, January and February are the months to visit a place like the Osa Peninsula, which in addition to private reserves has three national parks — making it a spectacular place to take in wildlife. At the southern end of Osa Conservation Area is Ballena National Marine Park, home to a bay where northern humpback whales spend their winter months. And while Ballena Park is the best place to spot humpback whales and dolphins, the entire Pacific Coast has places to spot migrating whales.

While whales swim to new locations each season, migrating birds ply the skies. The Osa Peninsula is home to well over 400 bird species, among them plover, egrets, and ducks arriving from Canada and other snowy destinations to spend January and February here. In the cloud forests, February is an excellent time to see the regal quetzals, with their startlingly bright plumage and exceptionally long tail feathers, as that is when they start nesting.

If you want the national parks more to yourselves, arrive during the very start of its rainy season — which is also called the green season, when already-lush forests get even fuller. In this season’s early months, May and June, the rain is typically limited to evenings and roads are still navegable. But temperatures have already started to cool, enticing wildlife out of their hiding spots.

On the Caribbean side of Costa Rica, Tortuguero National Park is laced with canals that blend the freshwater flowing from its rivers with the saline Caribbean Sea, creating unique brackish conditions where hundreds of bird species thrive. This ultra-lush region of the country is so jungly it’s also known as the “Amazon” of Costa Rica. And while it’s driest in September and October, it’s manageable in May and June.

Tortuguero actually means turtle, and two of the park’s most famous resident species, loggerhead and leatherback turtles, are ending their nesting season in June, while Atlantic green turtles are just beginning to nest — meaning coming ashore to lay their eggs.

If you can’t get to Tortuguero, a place that is only accessed by boat given its absence of roads, you can see Olive Ridley Turtles on the Pacific side. At places like the Playa Ostional Nature Reserve in Guanacaste Province, turtles come ashore to lay their eggs during new moon phases. So time your arrival for a new moon and the month won’t matter as much.

Best time to visit Costa Rica and have an adventure 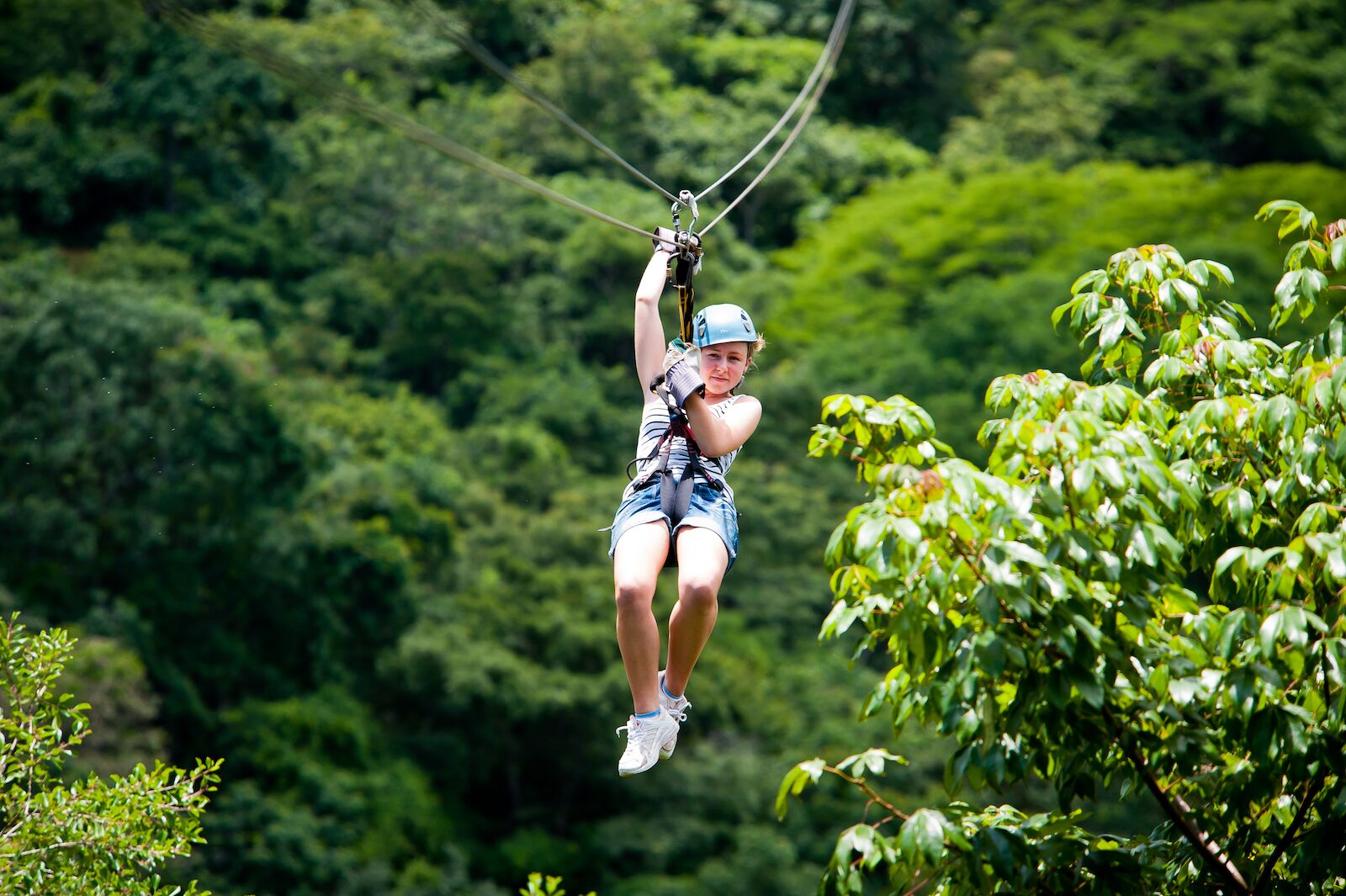 Hiking — May and June

If it’s outdoor adventures you’re after, you don’t need to come in the sunniest of months. In fact, the dry months of December and January may even be too hot for prolonged trekking. Hiking is well suited to the in-between seasons, when it’s neither blazing sunshine nor torrentially wet. While you should pack a poncho in any case, May and June can be a great time to explore the trails, which you can find in nearly all of the country’s magical national parks — such as at Arenal National Park and Poas Volcano National Park.

The combination of mountains and copious rains make for excellent whitewater rafting, as all that water comes down from the central cordillera to create fast-moving, thrilling rapids, like those on the Rio Balsa or the Penas Blancas River. The best conditions for whitewater rafting in Costa Rica are in July and August.

Ziplining is nearly a year-round activity, as it can be done in the morning before afternoon rains. You’ll have the most spectacular views over the canopy in the dry season, but you’ll also have the most heat. In the rainy season, with the exception of the wettest months, mornings tend to be dry. 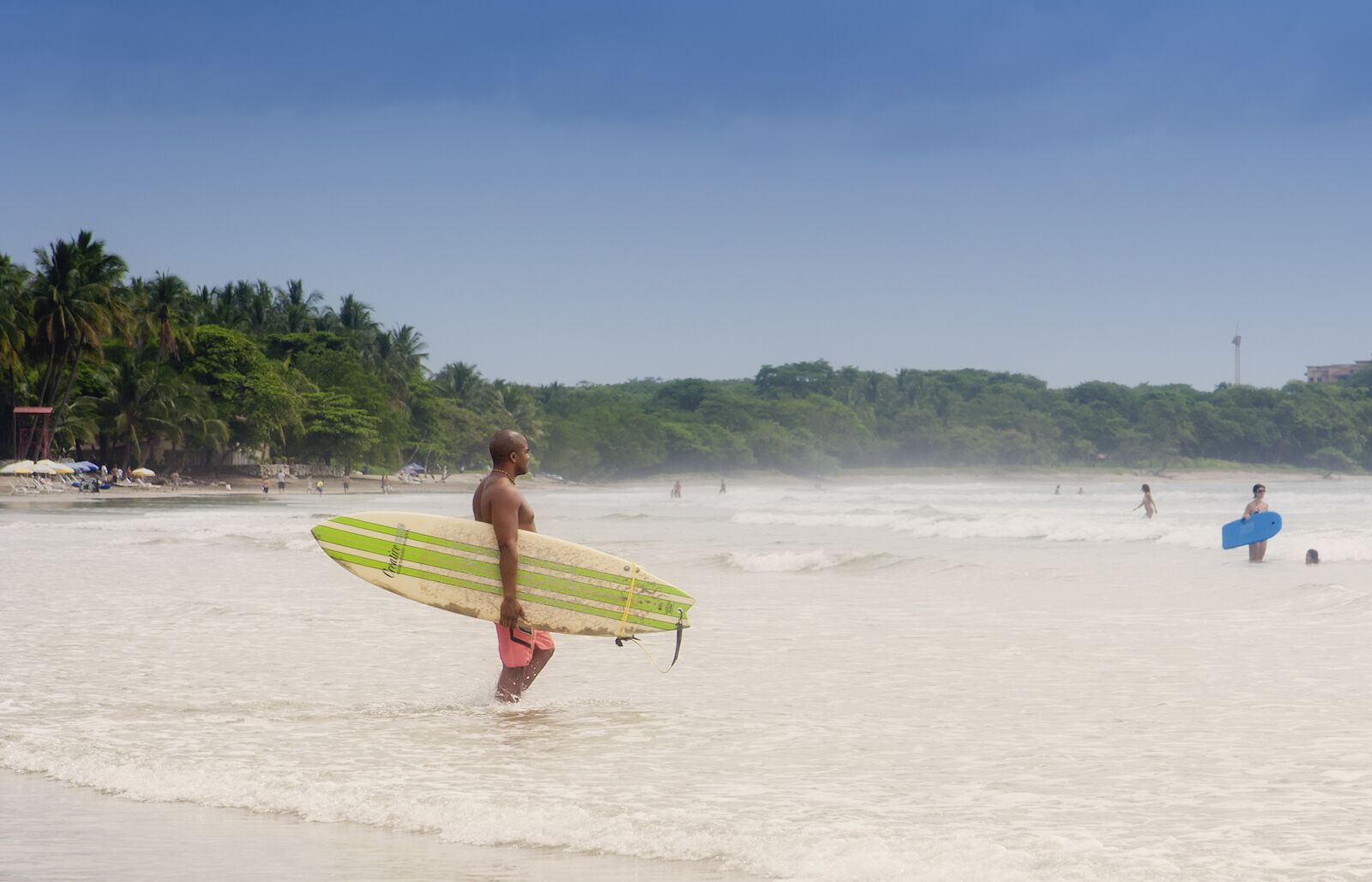 The ideal time for snorkeling anywhere is when there is no rain, as runoff can cloud ocean water. On the Pacific Coast, at a place like Manuel Antonio National Park, you’ll see colorful parrotfish. That said, if you want to peek under the surface on the Caribbean side, like looking for eels among the coral reefs at the Gandoca Manzanillo Wildlife Refuge, September and October are the months for that.

Many people come to Costa Rica specifically to surf, and there are world-class surf breaks up and down the Pacific Coast. For beginners, the most perfect waves are to be found during the dry season, from December to April. This is when off-shore winds hold the waves open, but they don’t tend to get too big and scary. This is also the best time in northern areas like the upper Guanacaste Province, since the swells are coming from winter storms way up north.

The central and southern Pacific Coast, however, gets swells that come from as far away as New Zealand, formed durings its winter from May to October. These swells hit the southernmost Pacific reefs and beaches so directly that they create pretty powerful waves. These are best for more experienced surfers. Unless you fall into the category, surf in Costa Rica from December to April.

Windsurfing and kiteboarding — December to April

Costa Rica’s waves may be world class, but the coast also benefits from consistent afternoon winds. December through April is the favored time of year to enjoy these wind-dependent board sports. 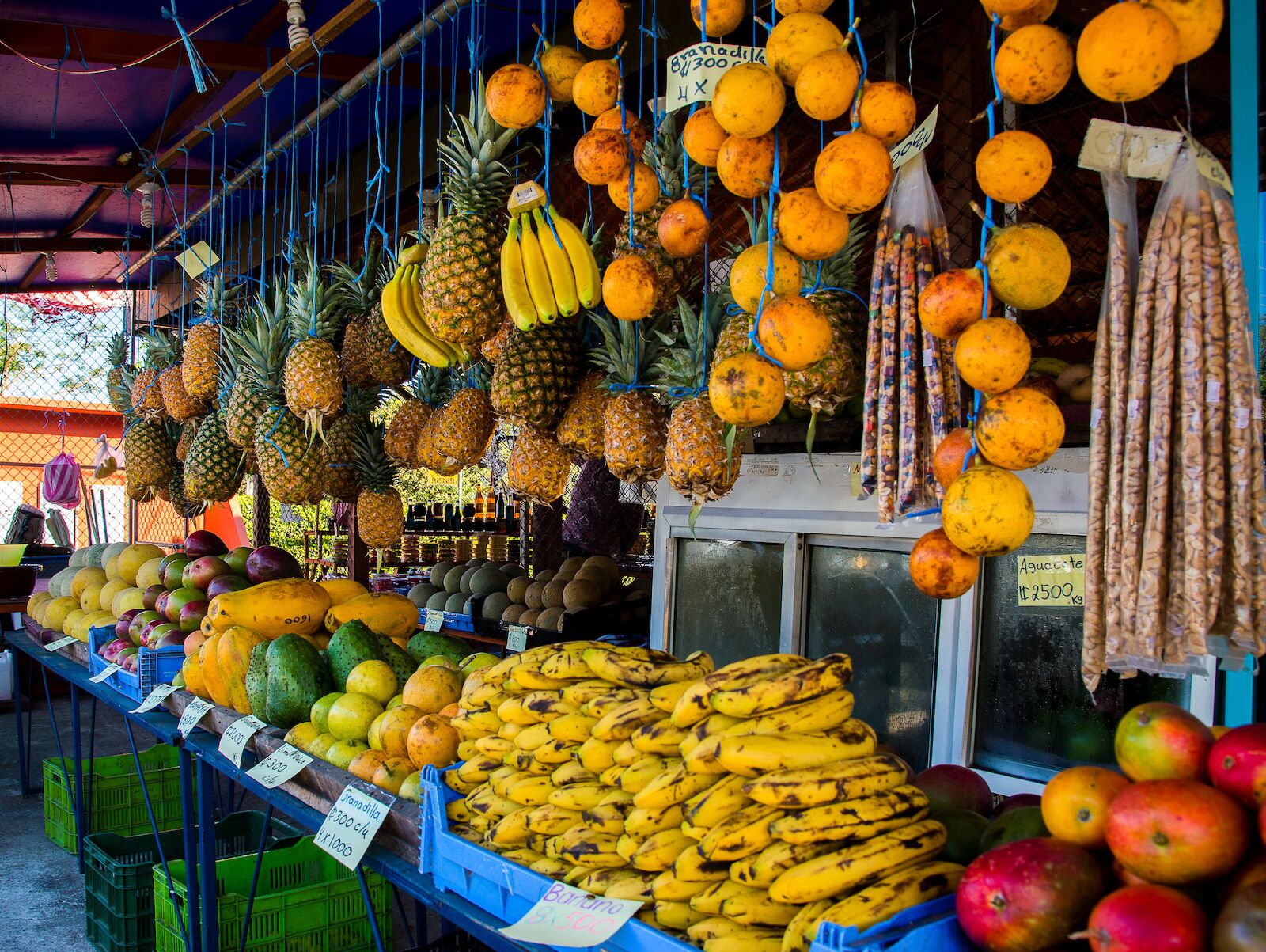 If it’s juicy tropical fruits you’re after, you can enjoy mangos from March through June, passion fruit practically all year, and star apples from January to April. There are so many luscious tropical fruits to try in Costa Rica, that you can find something delectable any time of year.

While many Costa Rican itineraries focus on the country’s forested mountains or irresistible beaches, the capital San Jose has a lot to offer — among them a bustling new restaurant scene. Costa Rica’s low cost of living and high quality of life have drawn international chefs, who are providing a fresh take on traditional Costa Rican cuisine, and, together with locally grown chefs, introducing diners to unique and sometimes long-forgotten ingredients.

The reality is that any time is a great time to eat well in costa Rica, but if you want to try innovative restaurants in San Jose like Restaurante Silvestre, which turns tasty local dishes into something sublime, and Sikwa Restaurant, which celebrates Costa Rican Indigenous cuisine, then come when the weather is nice. You’ll be glad you did, as you’ll want to take your time exploring this elevated city within Costa Rica’s mountain cordillera.