A meal at a Bhutanese restaurant may give you the impression that Bhutan’s cuisine is built on two elements: rice and chili. Because of Bhutan’s high altitude and rough terrain, traditional Bhutanese food is based around a small list of ingredients. The most common are rice, chili, yak meat, and dairy. These ingredients are used in a long list of rustic, rich, and hearty dishes that are especially nourishing in Bhutan’s cold winters.

A traditional Bhutanese meal is communal. Various dishes are served in wooden bowls and shared among family and friends. Although metal cutlery and chopsticks are regularly used in the city and in restaurants, it’s not unusual for people to eat with their hands in intimate settings. Simply squeeze a lump of rice into a ball, pick up a piece of meat or a vegetable, and eat the whole thing in one bite. To finish off the meal, wipe any sauce or juice left on your plate with a handful of rice.

Whether using cutlery or your hands, these are the iconic Bhutanese dishes to expect in a traditional meal. 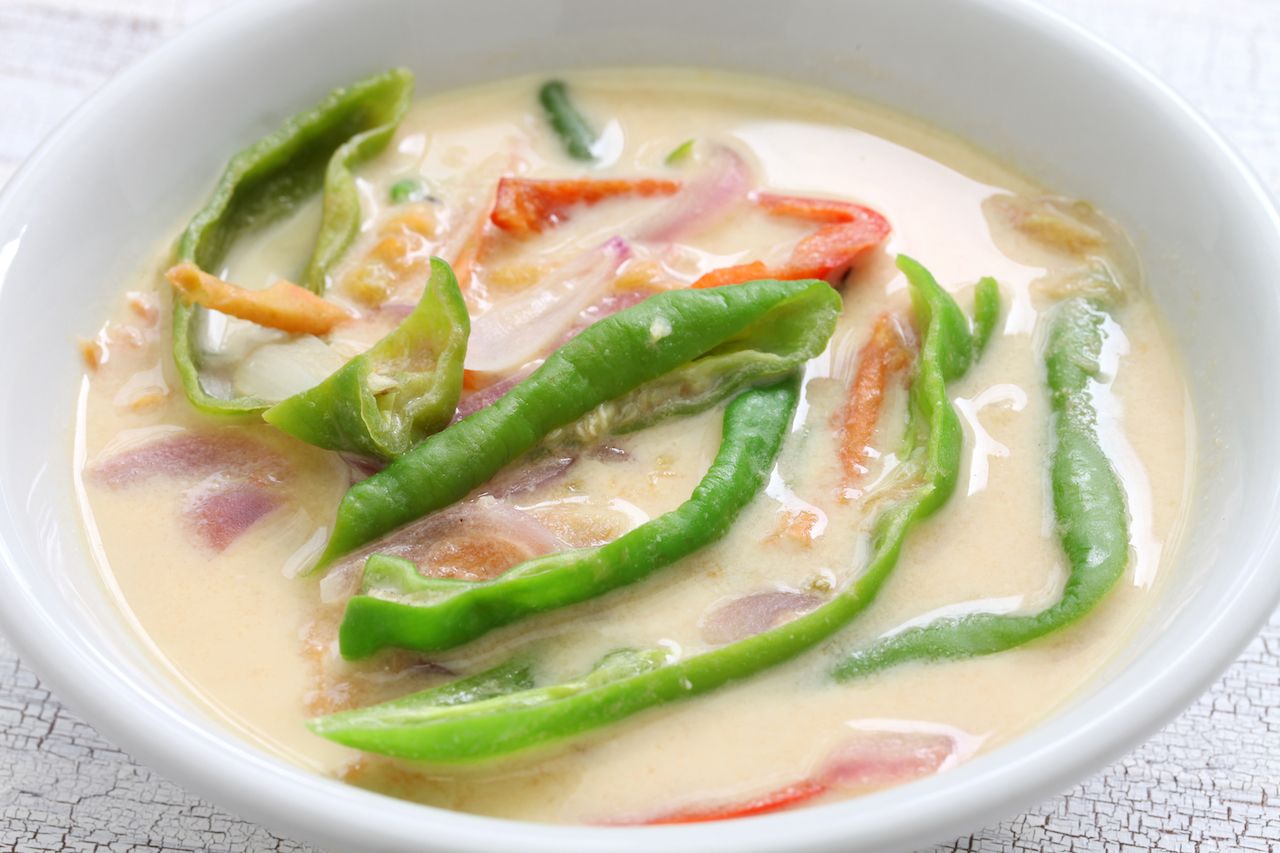 Ema datshi is coarsely chopped chili (ema) and cheese (datshi). It’s Bhutan’s national dish. You can find it in almost any local restaurant, but no two plates of ema datshi are the same. Chilis of all kinds can be used in the dish — green or red, dried or fresh — with a wide variety of meatiness and spiciness. The chilis are chopped, deseeded, and simmered with a sauce made from curdy fresh cheese and spiced with garlic, cilantro, or a touch of tomato. Some cooks serve ema datshi saucy and runny, while others reduce it to a gooey, creamy, almost stretchy melt, like the mozzarella on pizza. The cheese may be made from yak milk, which gives the dish a pleasantly pungent aftertaste.

In addition to cooking methods, there are other variations to this iconic dish. Restaurants and home cooks sometimes swap chili with mushrooms, thinly sliced potatoes, or green beans. No matter how it is made, ema datshi is always eaten with a lot of rice.

Bhutan is Buddist, but Bhutanese enjoy eating meat (butchery is outsourced to neighboring countries). The country’s cold climate makes it easy to air-dry and preserve meat for consumption year-round. A typical dish made with dried beef is shakam paa. The dish is made with thin strips of dried beef stir-fried with sliced radish and a generous amount of dry chili. Cooks can mix up the recipe by using yak butter or by coating the meat with cheese sauce, just like in ema datshi. Fresh pork or fatty dried bacon is sometimes used instead of dried meat. Whatever the meat choice, dry chili is a must for the recipe.

Another more popular meat is yak. Yaks have been an integral part of Himalayan agriculture for hundreds of years. Today, even urban households make their own yak jerky by drying fresh yak meat on rooftops. Yak is leaner and tougher than beef, so it has to be chewed slowly and thoroughly to get the delicate flavor out. The fat slowly seeps out from the muscle tissues, leaving a buttery and pleasantly gamey fragrance in your mouth. 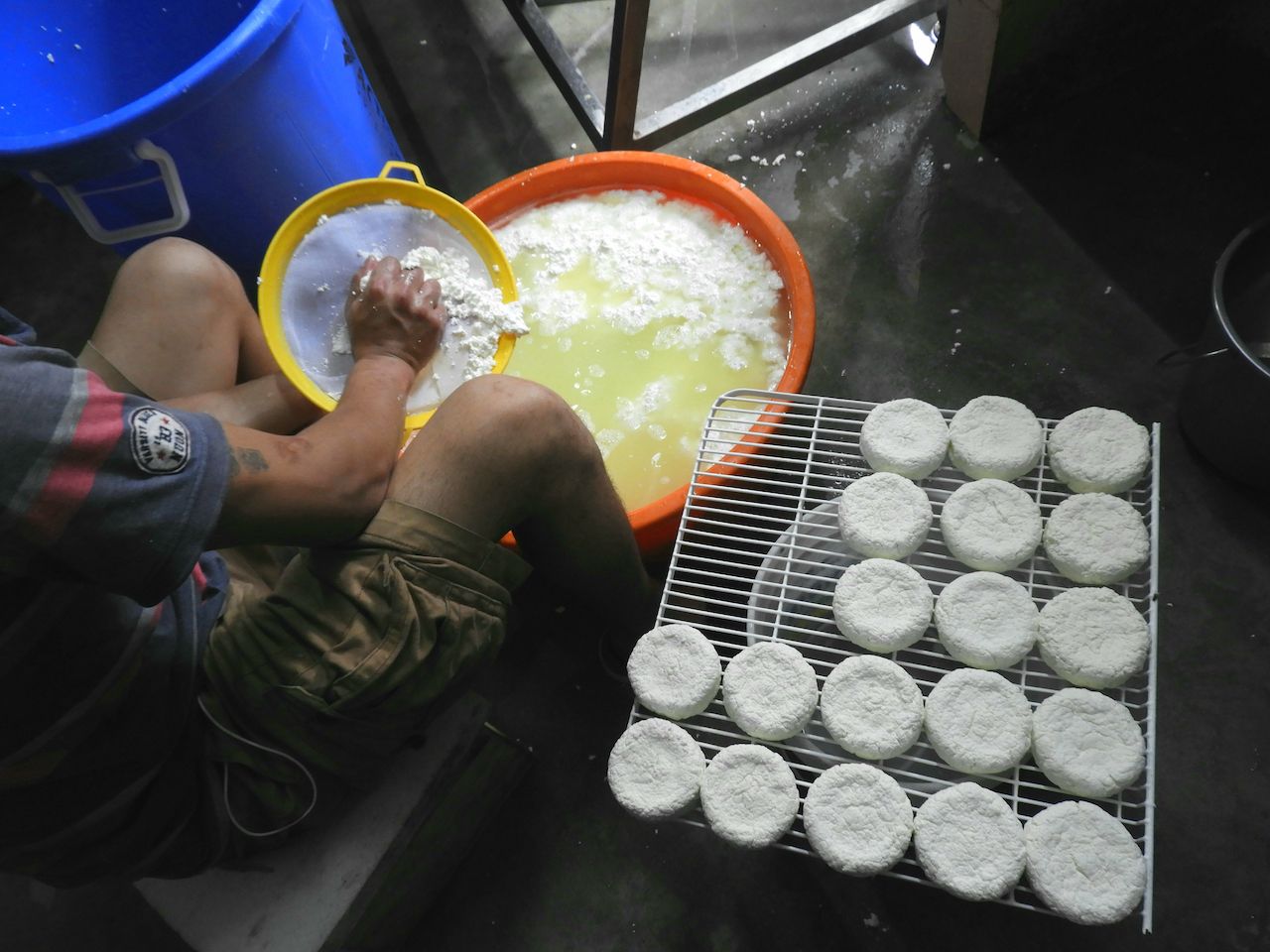 Cheese is ubiquitous in Bhutanese food, the most common being the fresh cheese used for ema datshi. It’s produced by heating and clotting buttermilk, and has a tender texture and mild taste similar to cottage cheese. Datshi is can be added to meat dishes, folded in sweet and savory pastries, or tossed into refreshing salads. Mix small lumps of cheese with crunchy vegetable cubes, and dress the salad with lime juice. Don’t forget to throw in a pinch of chopped fresh chili to spice up the taste.

A hardened variety of datshi is called churpi. You can see garlands of churpi cubes hanging outside grocery stores. This cheese is made from yak’s milk, pressed with heavy stones, and air-dried until rock-hard. It has a grainy texture and subtly sweet flavor. To eat it, soak it in water overnight, pop one into your mouth, and gnaw on it for hours. Due to its high protein content and inoffensive taste, it’s an ideal tidbit for hikers and herdsmen at high altitudes. 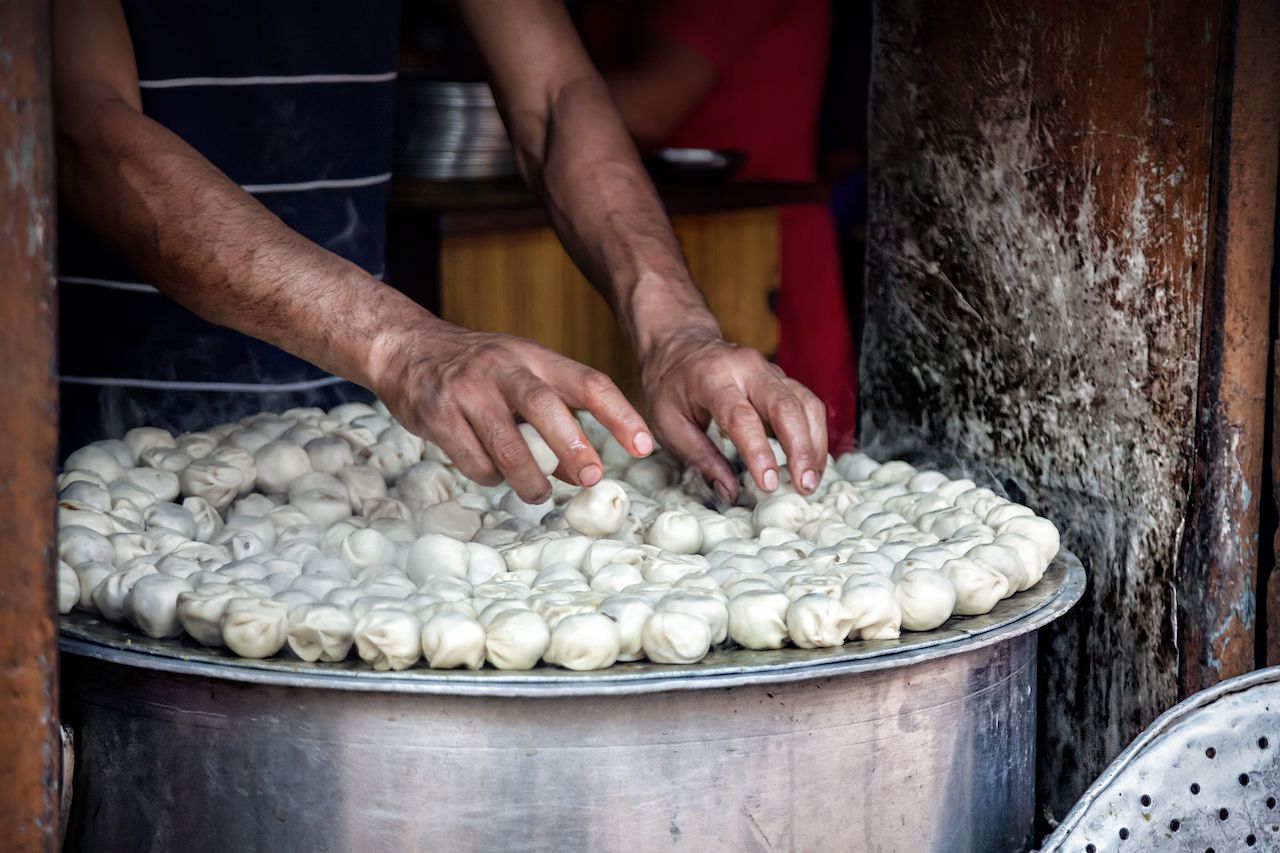 Momos are steamed dumplings. They are believed to be of Tibetan origin and are eaten as a snack or side dish in Bhutan. Lean ground meat is mixed with onion and garlic, and then wrapped in thin wrappers made from either wheat or buckwheat flour. After, they are shaped into round or crescent-like pouches and sealed with dense, beautiful pleats. Momos are often compared to the Chinese dumplings called jiaozi, but their taste is meatier and the texture denser due to having more meat and spice than vegetables.

In Bhutan, momos with beef or yak meat are the most common. Some eateries serve momos with cheese or vegetable fillings. The best way to eat a momo is to dip it in ezay, a chili paste that locals put in almost every dish and sometimes eat straight with plain rice.

CultureWhy You Should Visit Bhutan To Experience Its People — Not Just Its Mountains
Tagged
Food + Drink Bhutan
What did you think of this story?
Meh
Good
Awesome

The Boners of Bhutan: Understanding the Country’s Flamboyant Penis Art

Trekking the Sacred Mountains of Bhutan

The Boners of Bhutan: Understanding the Country’s Flamboyant Penis Art

End of the Road: The Changing Lives of Bhutan's Yak Herders

I Can Feel Bhutan Calling Me Back

Meet the Only Country in the World That's Carbon Negative

The Rucksack Wanderer's Guide To Bhutan

Balloons of Bhutan: A Happiness Project