Athens is a city blessed with a rich topography, surrounded by three hills of various heights offering great panoramic views. Summer is the perfect opportunity to walk up these hills, taking in the fresh Mediterranean air as you look out over this historic city. As beautiful as each of these hills are, however, it wouldn’t be a proper Mediterranean itinerary without a rooftop cocktail and a late-night bite. These eight spots offer a unique perspective of the city, allowing you a bird’s-eye view of the major sites in the process. Sunset is the preferred time to take in these spots, but hey, this is Athens. Standing above thousands of years of history is an unforgettable experience no matter the time of day. 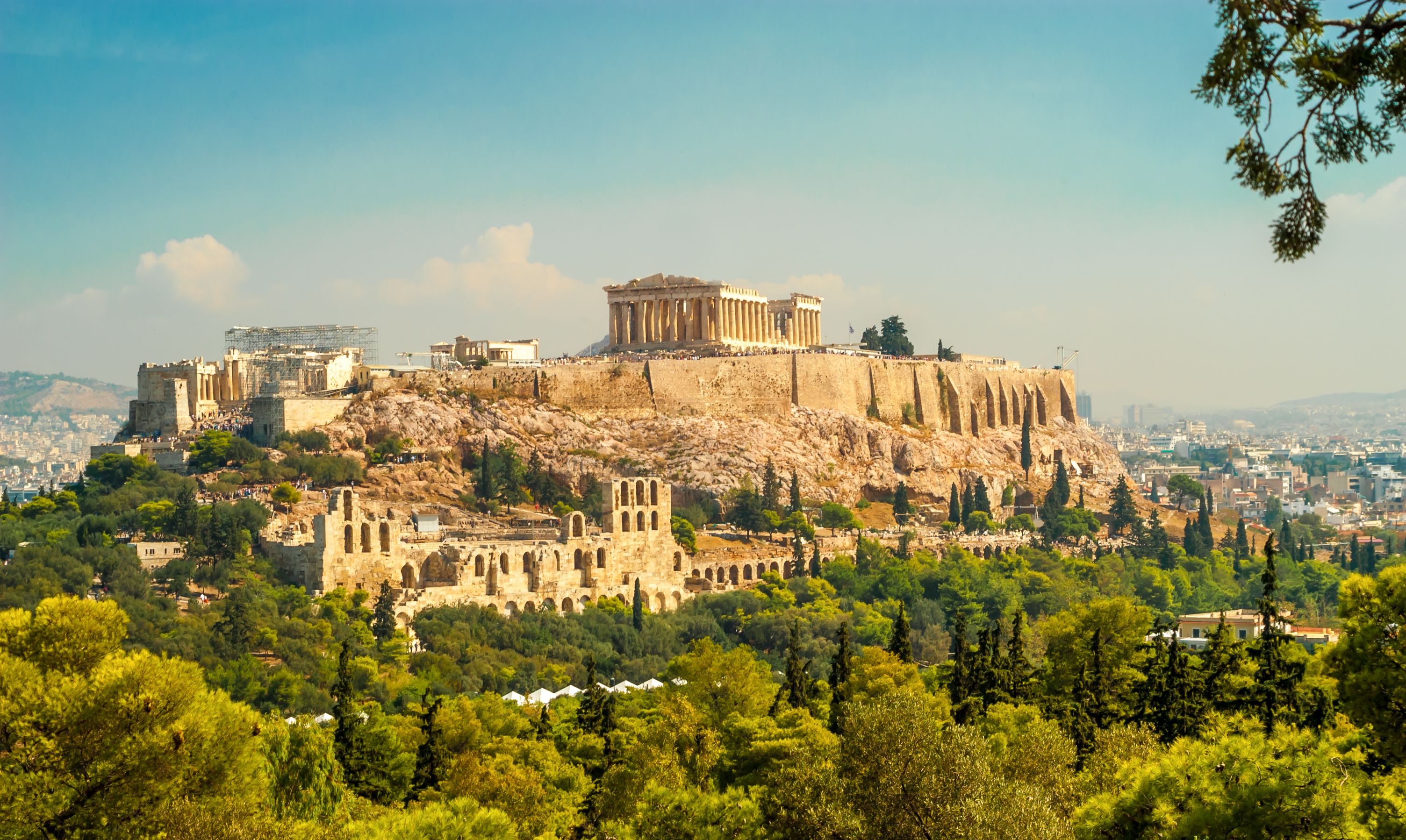 The Parthenon is the first thing that comes to mind when discussing Athens. This ancient temple, built in 447 AD, is located within a hill called the Acropolis, which comes from the Greek ἄκρον, or “the highest point,” and πόλις, polis or “city.” It served as a citadel. Also on the same point is the Odeon of Herodes Atticus, a theater structure located on the southwest slope of the Acropolis. The Parthenon is the highest point of the hill and offers a panoramic view of the entire setting and the city sprawl beyond. Also worth checking out while you’re there is the view from the theater, which is just as spectacular. 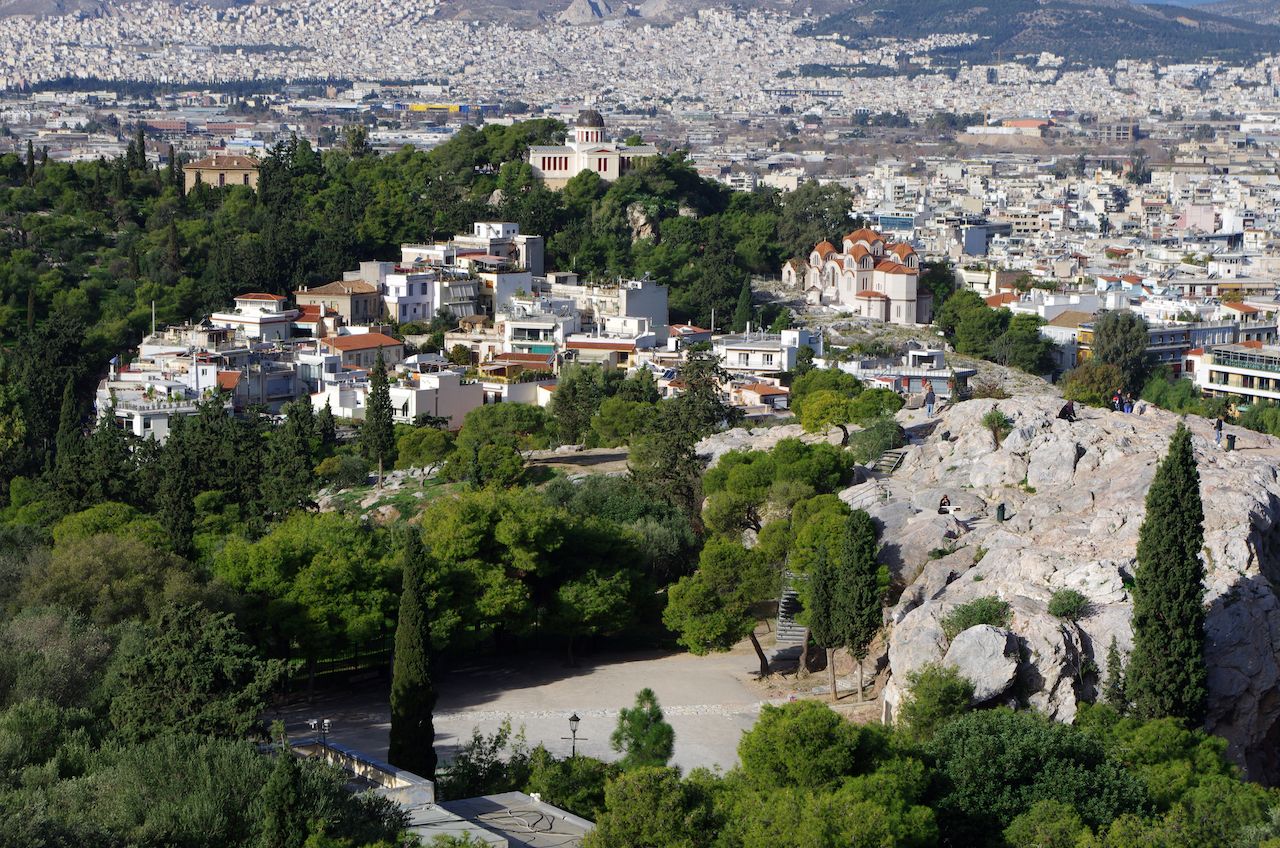 Areopagus Hill is located opposite the Acropolis, and it’s the easiest, quickest climb to have a view of both the Parthenon and Athens’ urban core. Apart from being a great spot for a photo, this hill has a unique history behind it. It’s also known as “The Hill of Ares” in Greek mythology because Ares, the god of war, died here as a punishment for killing the son of Poseidon. In classical times, this was the site of the court and the meeting point for the council of elders. Areopagus Hill is very close to the main entrance of the Acropolis, making it easy to visit both sites in one jaunt. 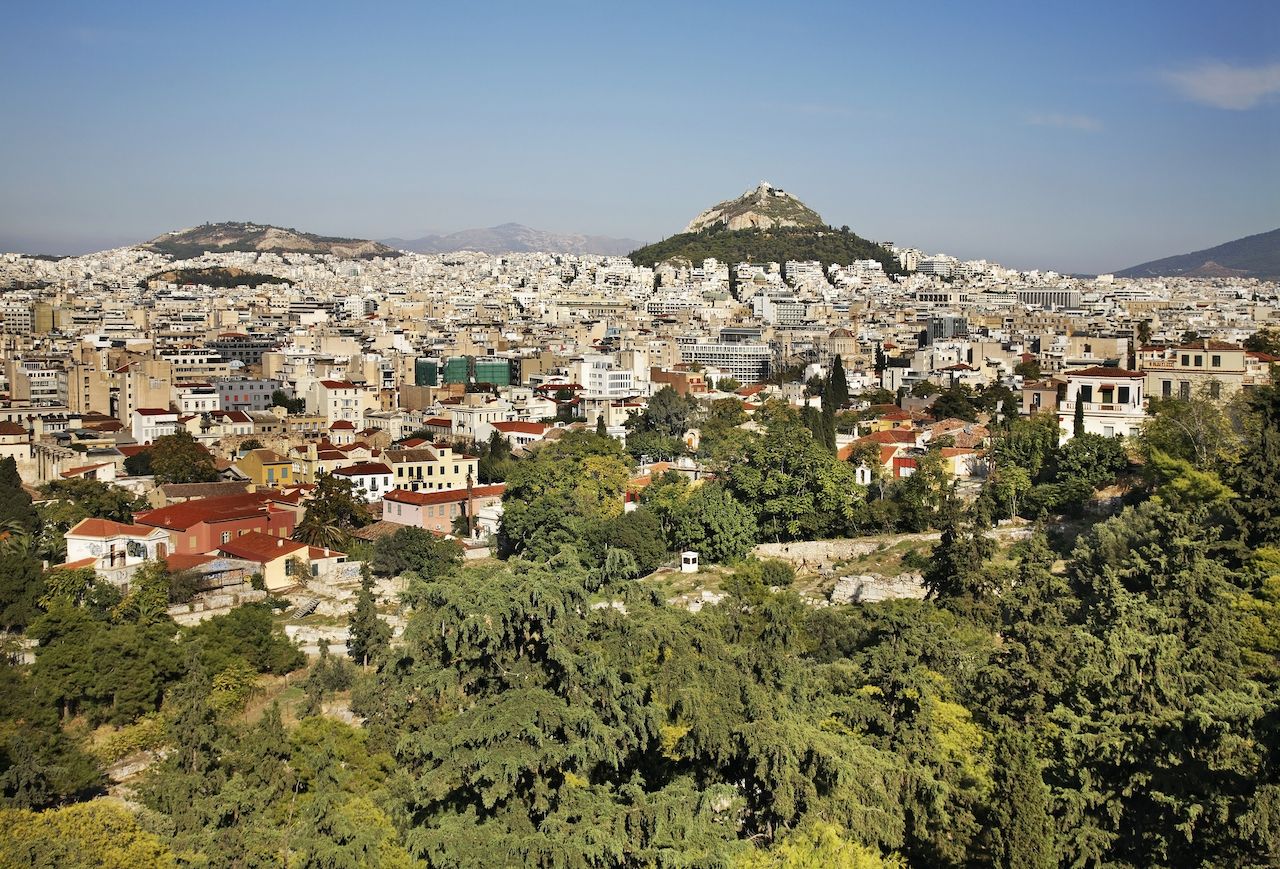 Lycabettus Hill is the highest of the three hills surrounding Athens and has the best panoramic view in the city. You can walk up its peak or take the funicular, but be sure to peer into the telescope at the top because it offers a detailed observation of the city and allows you to see as far as the island of Aegina. Nearby, at the top of the hill, there’s a theater that was built in the 1970s with the intention to present ancient drama plays, though over the years it has hosted many great musical artists as well. 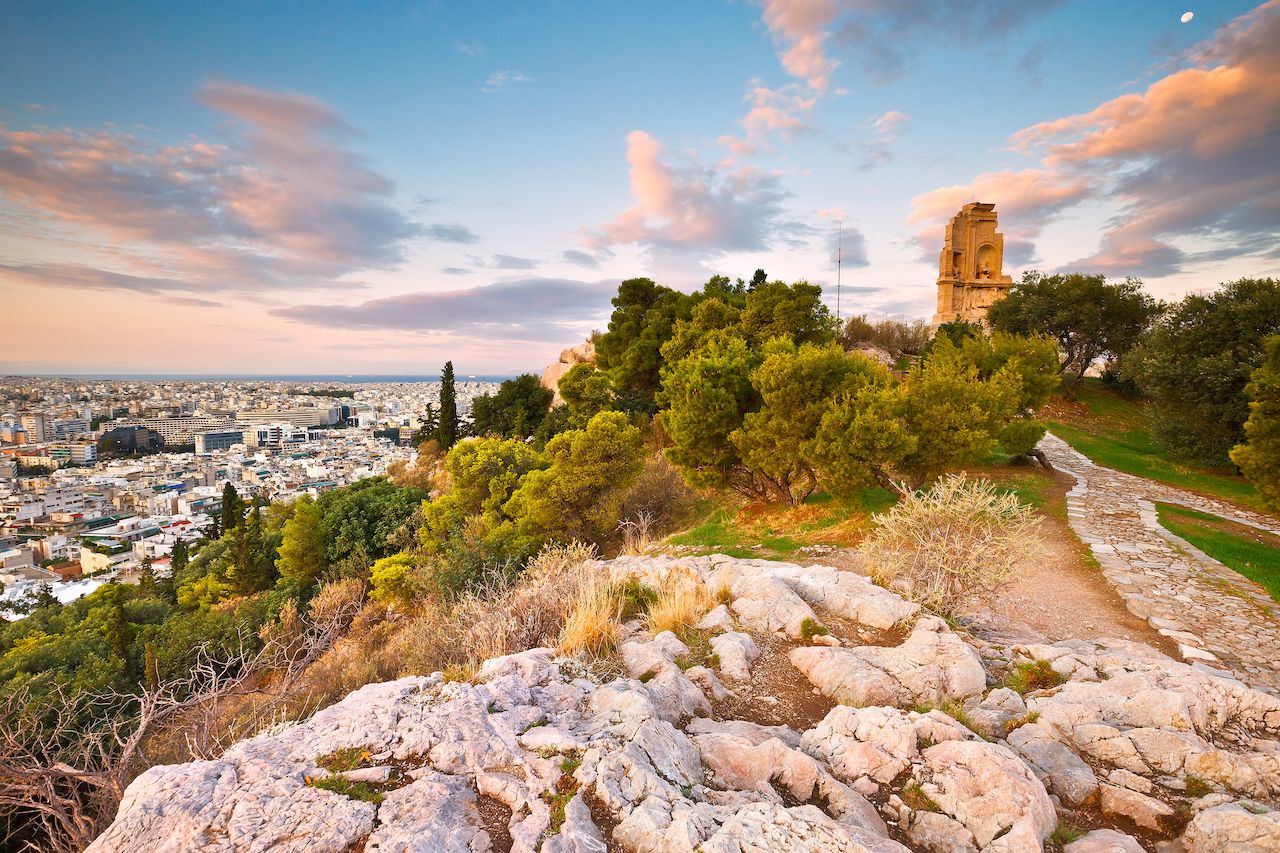 Southwest of the Acropolis, Philopappos Hill is lush, green, and lined with walking trails. In Greek mythology, it’s said that the hill was inhabited by the nine muses. As you walk up you’ll face the Acropolis, Parthenon, and the other ancient ruins. Turn around and you’ll see the Aegean Sea. The hill is identifiable by the Monument of Philopappos, built in honor of Julius Antiochus Philopappos, a Roman consul and administrator that lived in Athens until his death in the year 116 AD.

5. A for Athens Rooftop Bar 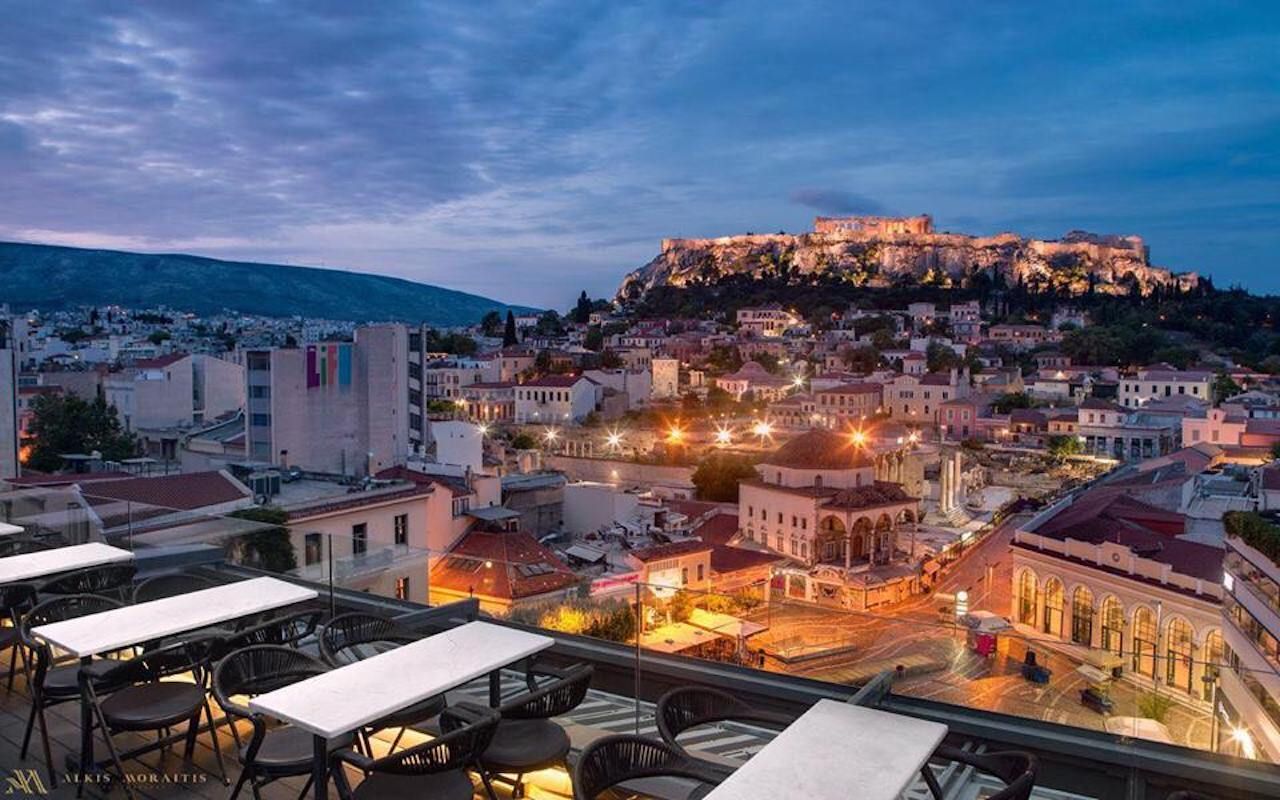 Photo: A for Athens Cocktail Bar/Facebook

Once you’ve taken in the hills, it’s time for a cocktail with a view. A for Athens is a hotel with a two-story restaurant and bar that offers the best view of Monastiraki Square, the Acropolis framed in the background. The place is located in one of the most populated and central areas of the city, a quick stroll from the ancient agora and about 10 minutes away from the Acropolis. The restaurant, which has a delicious menu of high-end Greek dishes, is framed by large glass windows that look out over the city. If you prefer a cocktail, the open rooftop bar is perfect in the warmer summer months. 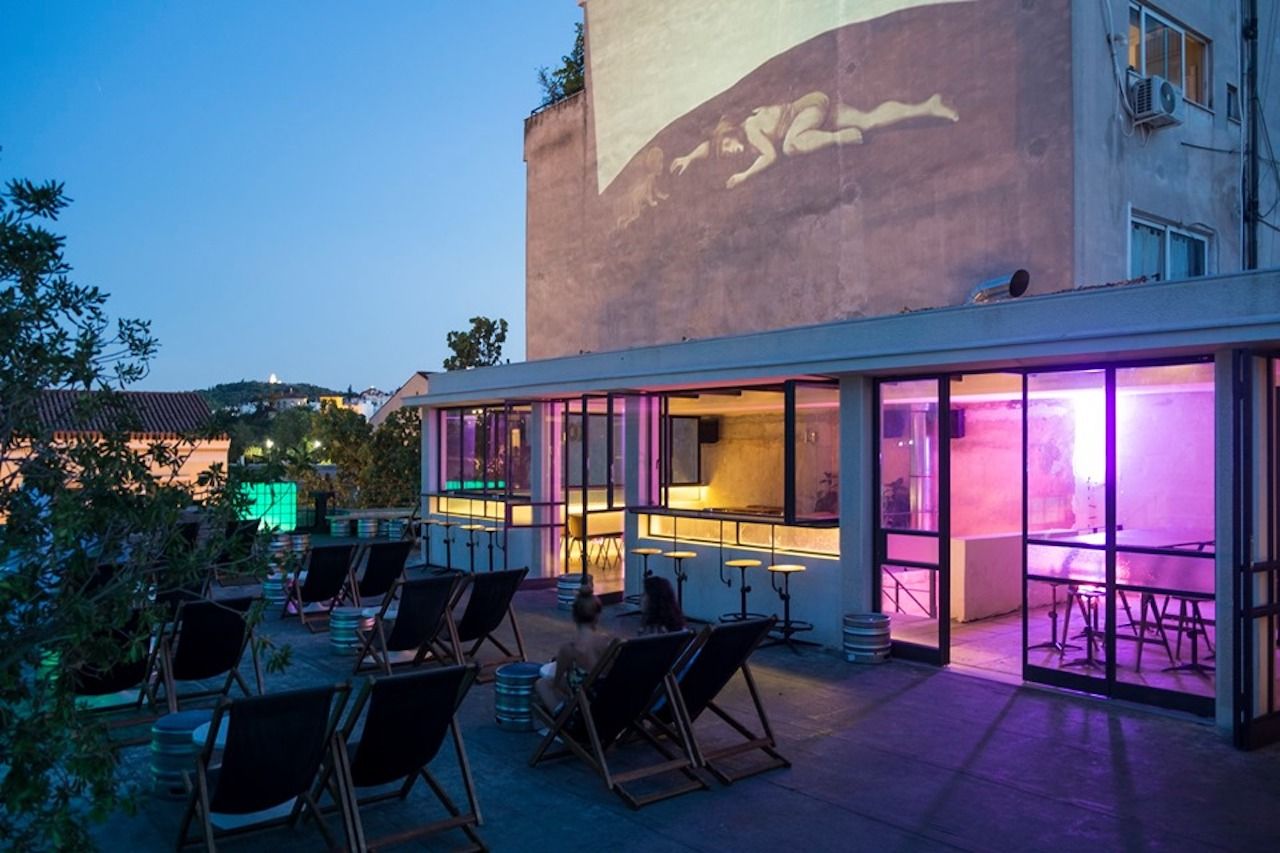 Bios is a modern cultural center hosting exhibitions, screenings, performances, and concerts right in the heart of the city. I’d recommend during your visit to Athens to browse the current events to learn how young Athenians entertain themselves, including the open cinemas. Bios’ terrace bar offers a more alternative and contemporary side of Athens at night. Sit on a deck chair looking over the Acropolis and listening to the DJ while enjoying a unique drink such as the papoto, which is an ice-cream cocktail. 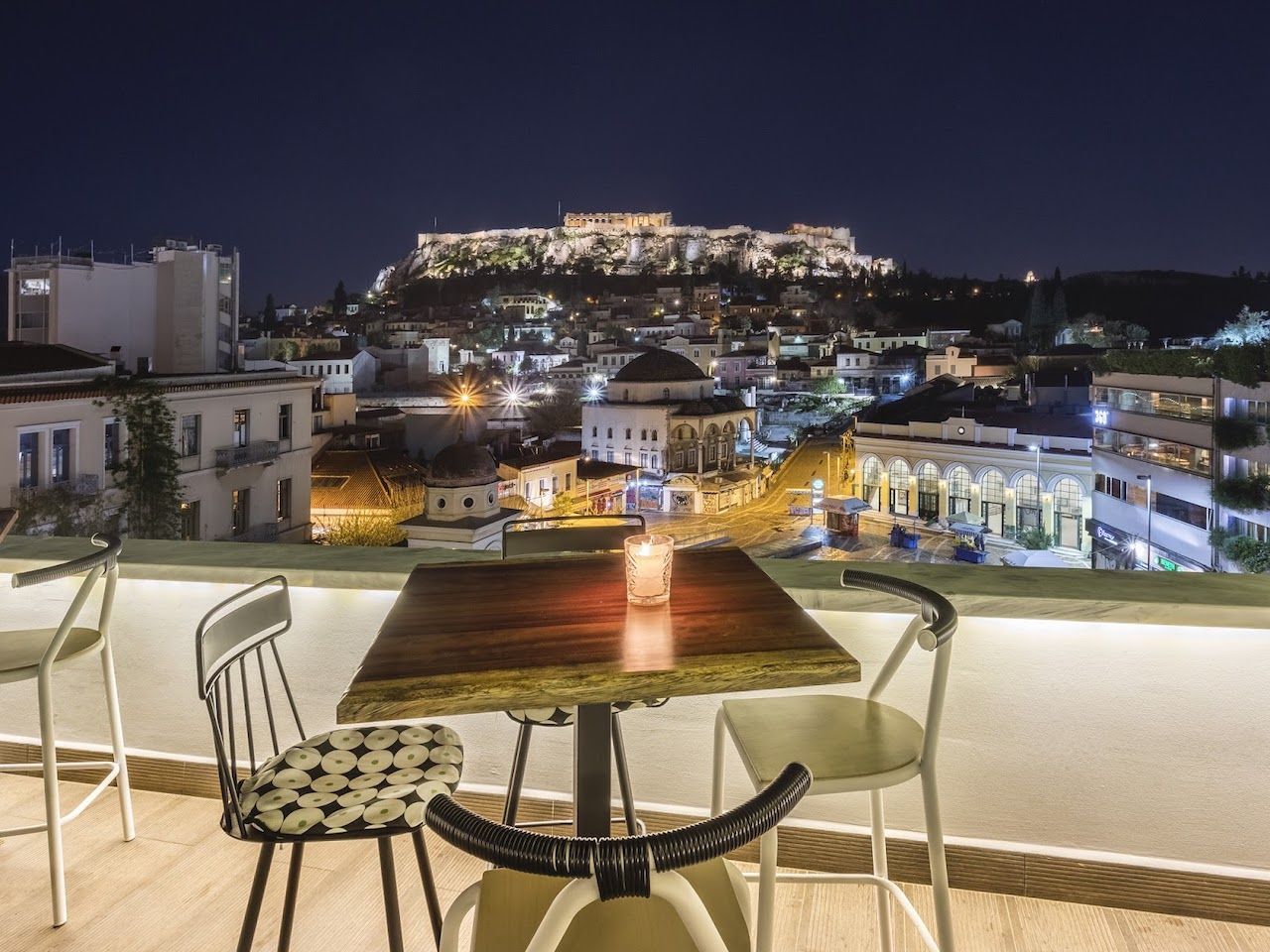 Among the trendiest places for drinks in town, MS Roof Garden is located in the central area right next to the metro station. The terrace looks over Monastiraki. The bar also serves food and is a great choice for a morning coffee, so you can make a stop here at just about any point of the day. The decor of the place is really stylish, and if you choose to sit outside, you’ll get a perfect view of the city. 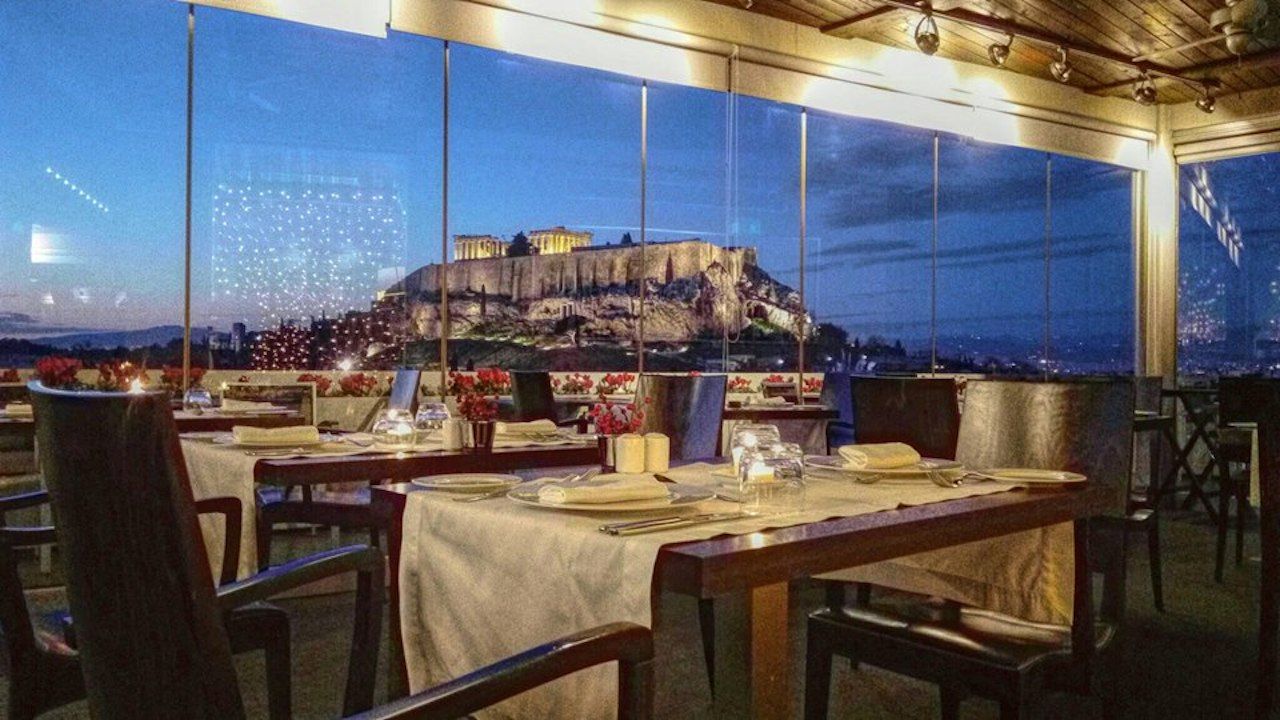 The terrace of the Athens Gate Hotel offers a 360-degree view of Athens, including the temple of Olympus Zeus in the east and the Aegean Sea, giving it a perspective not found from the other rooftops listed here. To the northeast is Lycabettus Hill. The menu, though pricey, is a great place for a meal underneath the stars and a nightcap drink before heading back to your hotel or Airbnb.