“Land of the Eternal Blue Sky” is a phrase derived from the Central Asian religion of Tengriism, which is the worship of the celestial god Tengri, whose name means “sky.” Today, it serves as Mongolia’s motto, a moniker aptly conveying the vastness of unspoiled lands under a rainless firmament. One way to experience the adventures that can unfold under Tengri’s watchful eye is by staying with a nomad family. Away from the congested capital city of Ulaanbaatar, bunking with nomads helps travelers experience Mongolia’s other world — one of peace, possibility, and, of course, endless skies. Here’s what you’ll encounter when you stay with a nomad family in Mongolia. 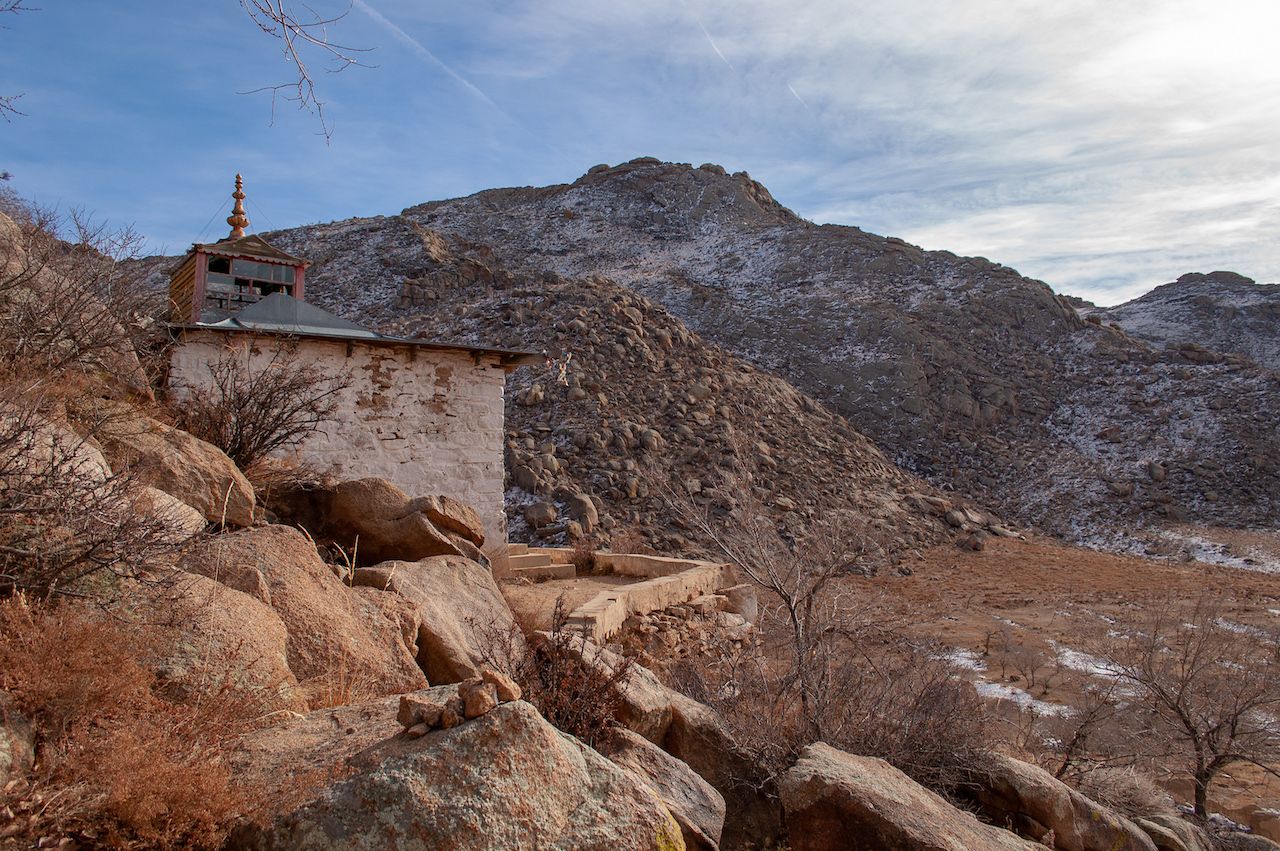 Outside of Ulaanbaatar, tourist camps serve as the typical accommodation for backpackers, and you can find them in parts of Gobi Gurvansaikhan, Gorkhi-Terelj, Khustain, and other national parks. A nomad family’s home offers the possibility to delve further into these regions and set your own pace, going totally off the map.

For example, out in central Mongolia, after you’ve encountered the wild horses of Khustain National Park or visited the old capital city of Kharkhorin, you can take your excursion over to Khogno Khan. This reserve, tucked in a horseshoe of mountains, houses the remnants of a secluded monastery, not to mention views that unite in one image: flat terrain and rolling sand dunes with striking peaks. Having a nomad family’s home as your base provides you with the insider position and flexibility to experience the range of sights born under Mongolia’s blue sky. 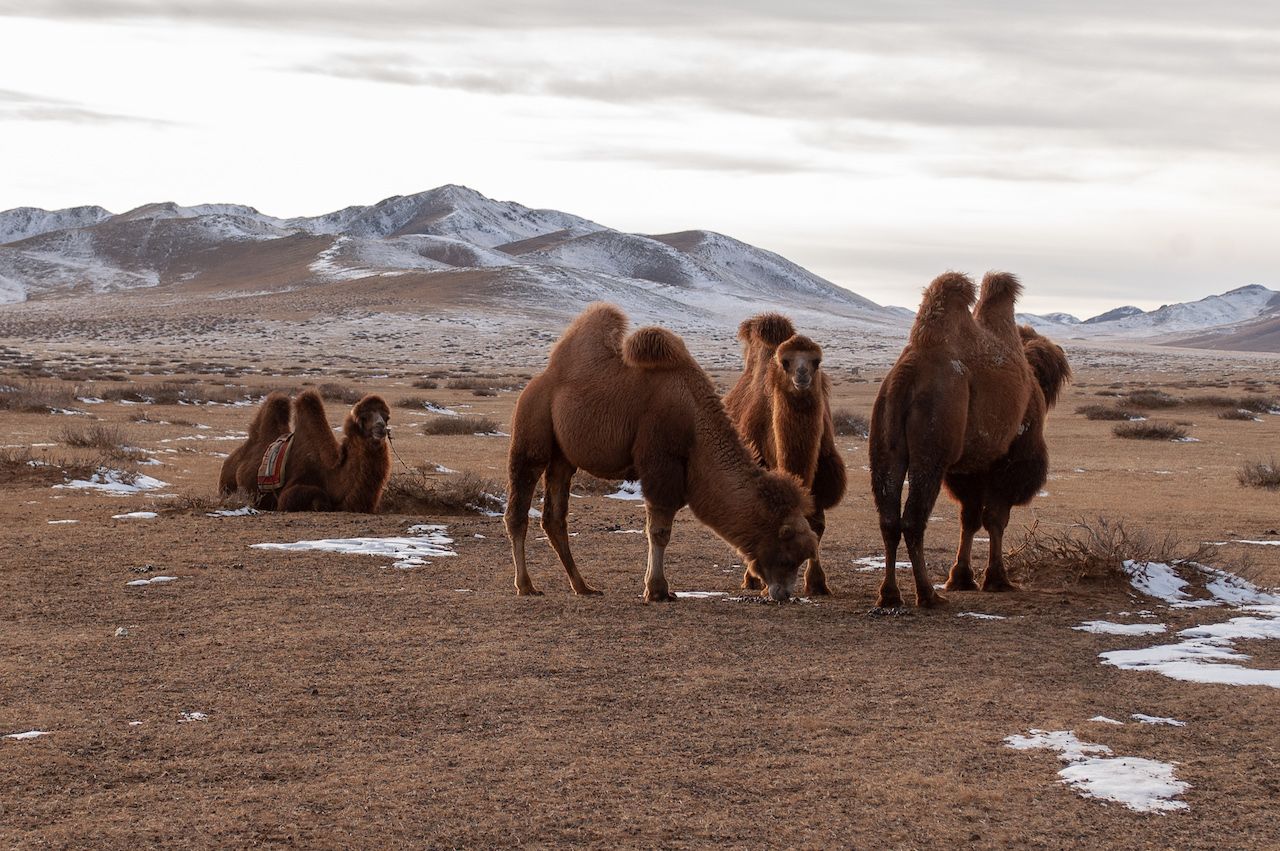 Nomad families have livestock and other animals under their care, giving travelers the chance to encounter a little extra adventure. In the Khövsgöl region, the Tsaatan nomads move with reindeer, a unique practice only surviving in Mongolia. Meanwhile, the Kazakh eagle hunters of Bayan-Ölgii are responsible for golden eagles, grooming them for hunting small prey. Out here, you’ll get to witness firsthand how nomads tend to their atypical livestock and use them to sustain food sources.

If you’re lucky, you might get to handle some animals yourself. Horses are a given and cherished in Mongolia, with competitive horseback riding serving as an attraction in the country’s annual Naadam festival. Camels, especially in the Gobi Desert, may also be accessible. Riding from atop one of these, you’ll get to admire the entirety of the land beneath the sky: hills rolling into mountains, roaming livestock, and distant yurts dotting the horizon.

Living out of a yurt 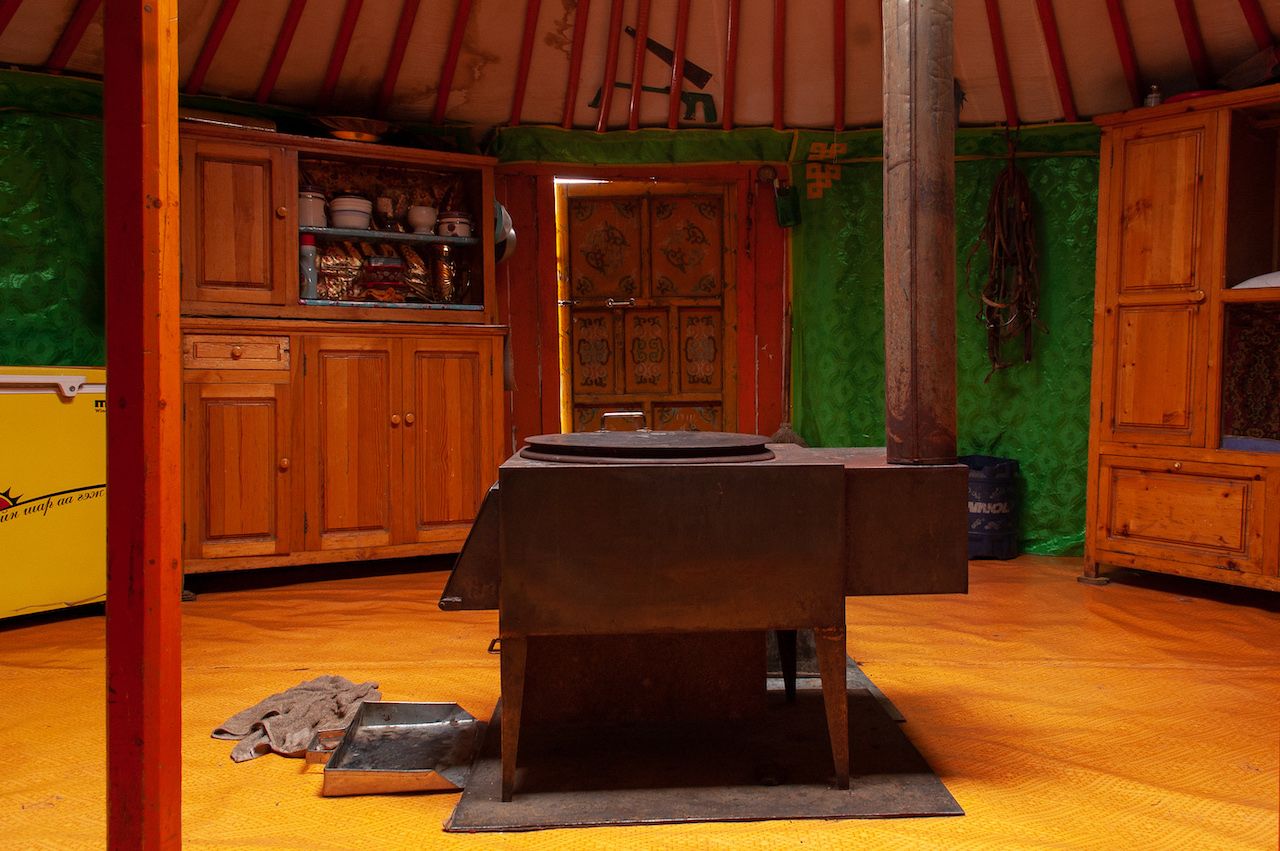 Whenever you mention your nomadic experience to your friends and family back home, they’re going to ask, “Did you stay in a yurt?” The correct answer is, yes, you stayed in a kind of yurt, which is the term for the round, tent-like portable homes originating in Central Asia. In Mongolia, this is more commonly called a ger, the Mongolian word for “home,” and there is a slight technical difference in the construction when it comes to supporting beams…but, let’s skip ahead to what’s inside.

A stove is the center of a yurt’s world. It’s where the family cooks and keeps warm, and you’ll feel instantly snug the moment you duck through the small, single door leading inside. There will be a few hard beds, cupboards displaying the gifts of past visitors, and a table and chairs for meals. Since you’re probably wondering, no, there isn’t a toilet in the yurt — but there will be a hole in the ground outside.

A taste of authentic flavors 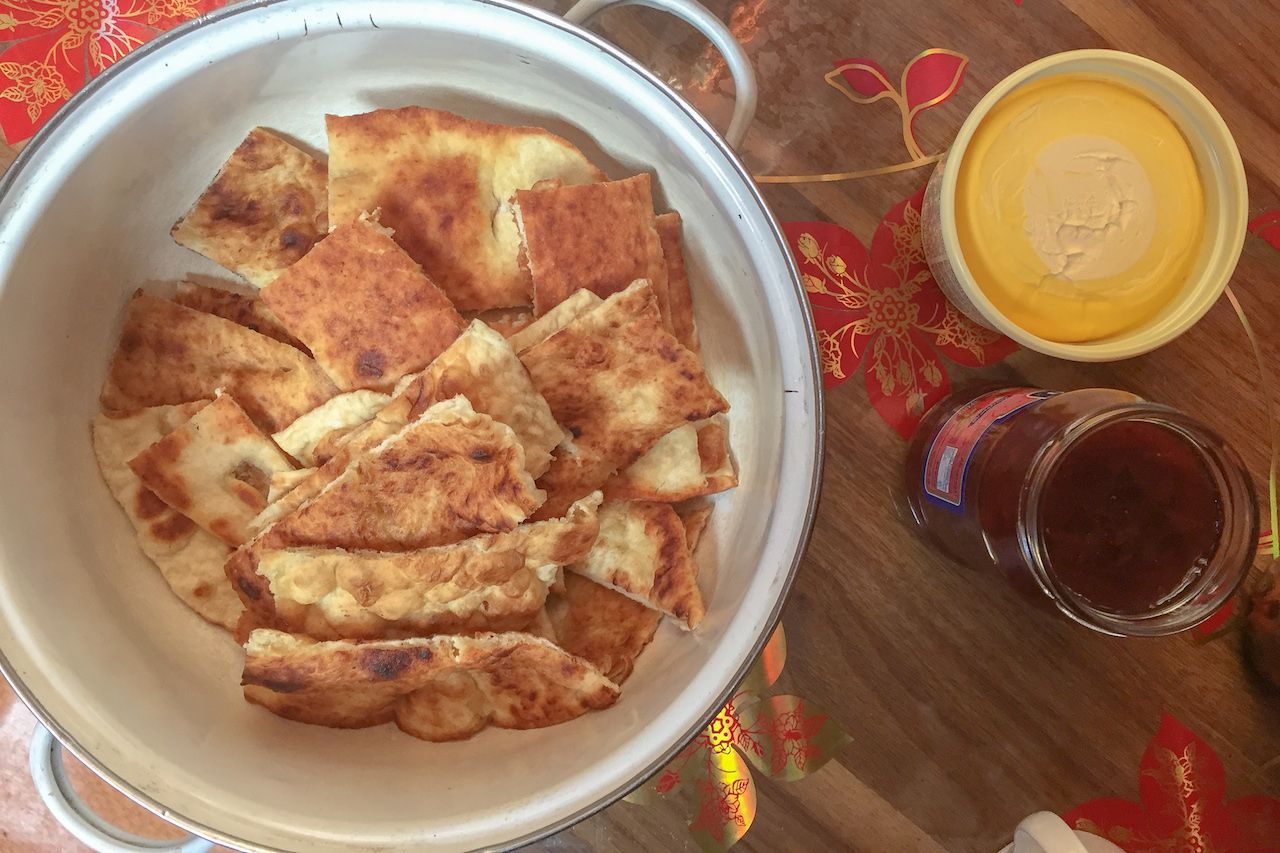 Living on the food produced by their livestock, Mongolia’s nomad families are entirely self-sufficient. Homemade yogurt and cheeses can be made from reindeer milk, and while staying with a family, you may get to have some gambir (pancakes) for breakfast or boodog (barbecue) for dinner.

So what makes these Mongolian staples so special? For starters, nomad families don’t haul around grills. Boodog is cooked by stuffing hot coals into the stomach of a goat or marmot. You’ll probably find this meat tougher and more fatty than what you’re used to, but the smoky taste is worth the marathon your jaw will have to run. As for the pancakes, they’re just good fun — cut up into handheld pieces and served with jam rather than syrup.

An inside look at nomadic culture 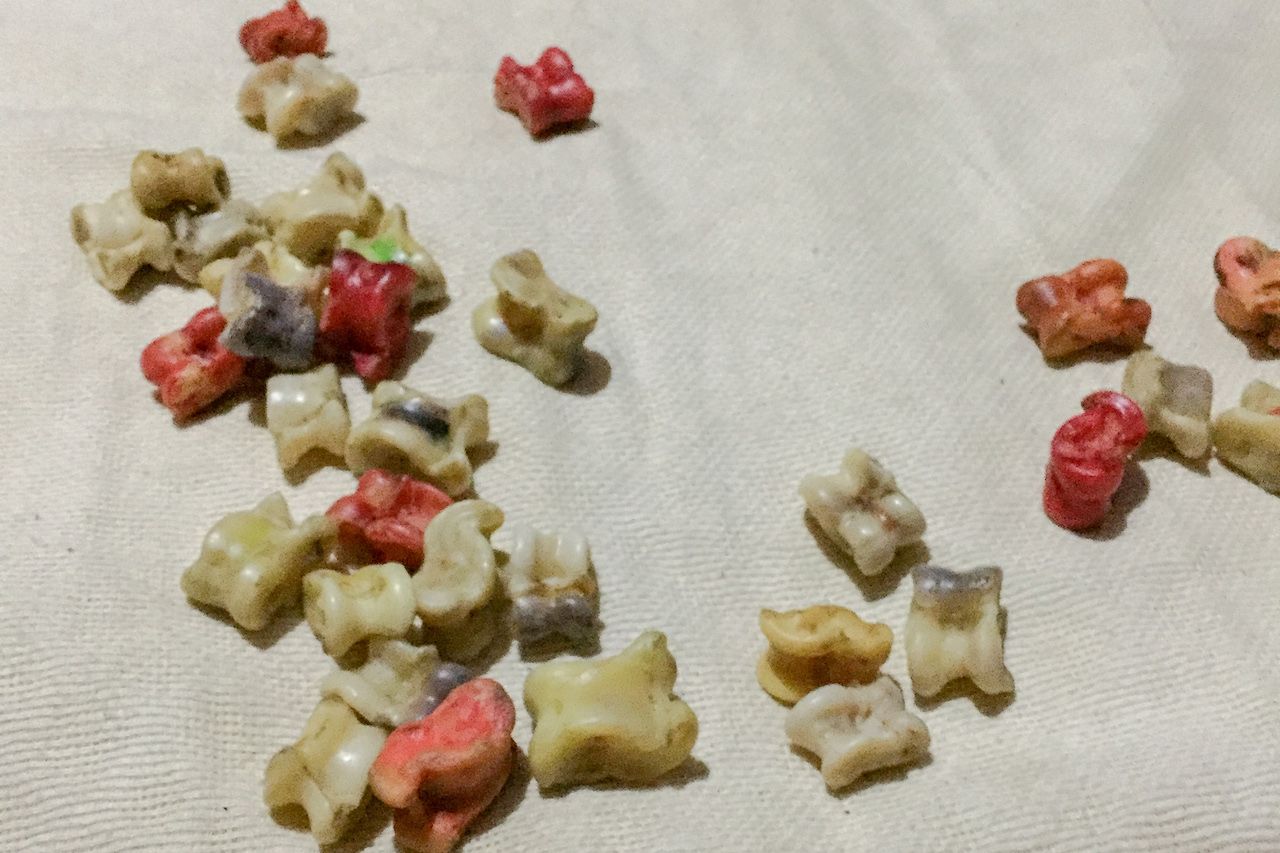 Shagai is the term for the ankle bone of a sheep or a goat, with each of its four sides representing different livestock. In Mongolia, they have a multi-purpose function, used as both fortune-telling vessels and game pieces. The latter is a common pastime in nomadic households, and you may find yourself flicking one shagai to another or racing against other pieces.

The nomadic lifestyle is naturally one of a kind, and it’s something that curious-minded travelers will want to learn more about. Shagai isn’t the only intriguing piece of traditional Mongolian culture you’ll encounter with nomads. If you’re staying over on a Sunday night, you might see the kids off to school. Today’s nomads send their children into town to learn during the week, and they’ll return on weekends and breaks to help support the family’s livelihood. You may not realize you even had these questions and more until you’re there, rolling ankle bones on the yurt’s floor and observing the day-to-day in a Mongolian nomad family’s life.

Tradition in the present day 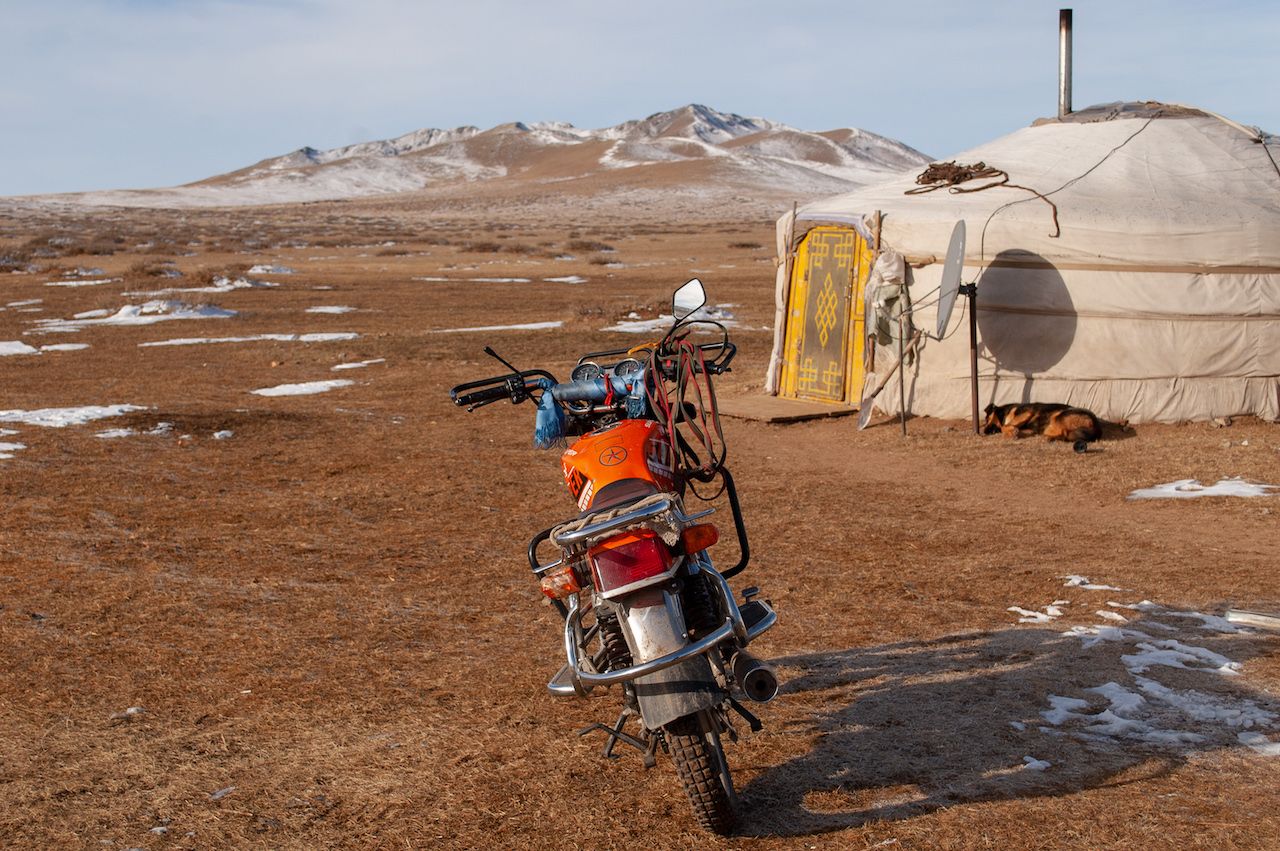 Staying with a nomad family isn’t exactly like stepping back in time. Nomads have expertly preserved cultural traditions while embracing modern amenities that help them continue with their way of life. You may witness them shuttling the kids to school in a car, going to visit another family on the back of a motorcycle, or even pulling out a cellphone. While the nomadic lifestyle seems secluded, the strength of community is never overlooked, and these tools help them access resources, communicate about wandering herds, and take care of other matters.

Today, many aspects of the nomadic lifestyle are sustained despite a changing world. For the Kazakh eagle hunters in western Mongolia, a tradition typically passed down through the male members of the family, a mixture of increased access to other food sources and declining prey populations have drawn boys away from the practice. However, this simply makes room for another group to enter the arena: girls. While women have taken up falconry throughout history, men have always compromised the majority of Mongolia’s eagle hunters. In 2016, Aisholpan Nurgaiv became the first girl to compete in the Golden Eagle Festival, an annual event testing the abilities of hunters and their eagles, and her story was documented in the film The Eagle Huntress. As shifting lifestyles affect traditional practices, Mongolia’s nomad families have not only kept their culture alive but are also sharing it with the rest of the world.

FestivalsThe Golden Eagle Festival Is One of the Top Experiences To Have in Mongolia
Tagged
Culture Trip Planning Epic Stays Mongolia
What did you think of this story?
Meh
Good
Awesome