Travel to Asia is dominated by a handful of big names. Japan and China, expat hubs like Chiang Mai and Bali, and the infamous backpacker’s strip of Khao San Road in Bangkok. But Kazakhstan, Uzbekistan, and other former Soviet republics that make up Central Asia are creeping up on the horizon as the next big destination everyone is going to be talking about and flocking to for their next holiday.

The rising tourism trend of the “Stans” makes perfect sense when you consider just how much they have to offer adventurous travelers. The region was home to the Silk Road, which functioned as a crossroads that moved people, goods, and philosophies between Europe and Asia. Unsurprisingly, this has led to many conflicts between ethnic, religious, and political groups over the years, but Central Asia has come out the other side as one of the most robust cultural destinations in the world. It’s only a matter of time before the tourists start flooding in, but for now, they’re relatively untouched by crowds. Here’s why Central Asia is on the rise and why you should make it your next big trip before the rest of the world catches on.

Central Asia is a big place with plenty of room to explore. 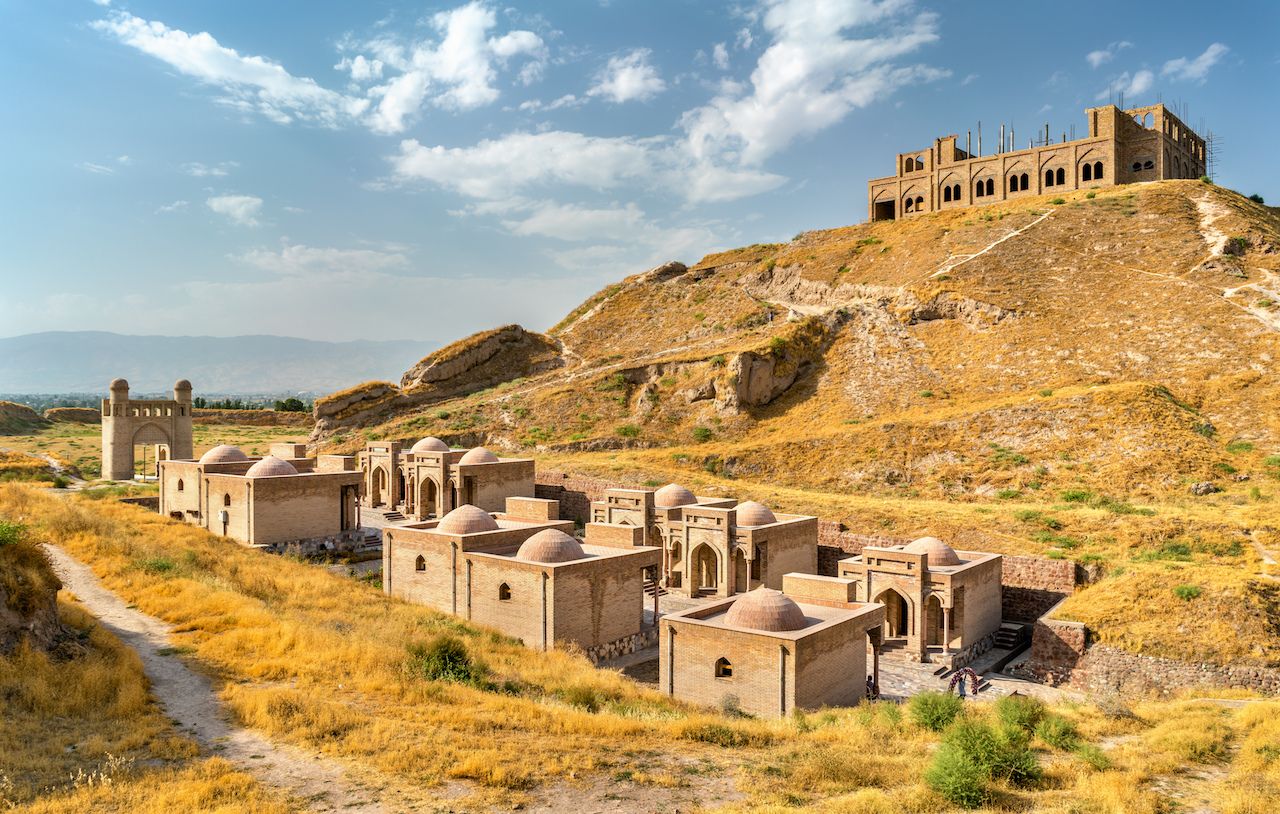 Central Asia stretches from the Caspian Sea in the west to China in the east and from the border of Afghanistan in the south to the border of Russia in the north. While there’s some debate over exactly which nations make up the region, Kazakhstan and Uzbekistan serve as the two major anchors, with Kyrgyzstan, Tajikistan, and Turkmenistan also in the mix. Central Asia covers an area of about 1.5 million square miles with varied landscapes that haven’t suffered from over-development or over-tourism, allowing for a range of activities for intrepid travelers.

Kazakhstan is a growing hub for outdoor pursuits. 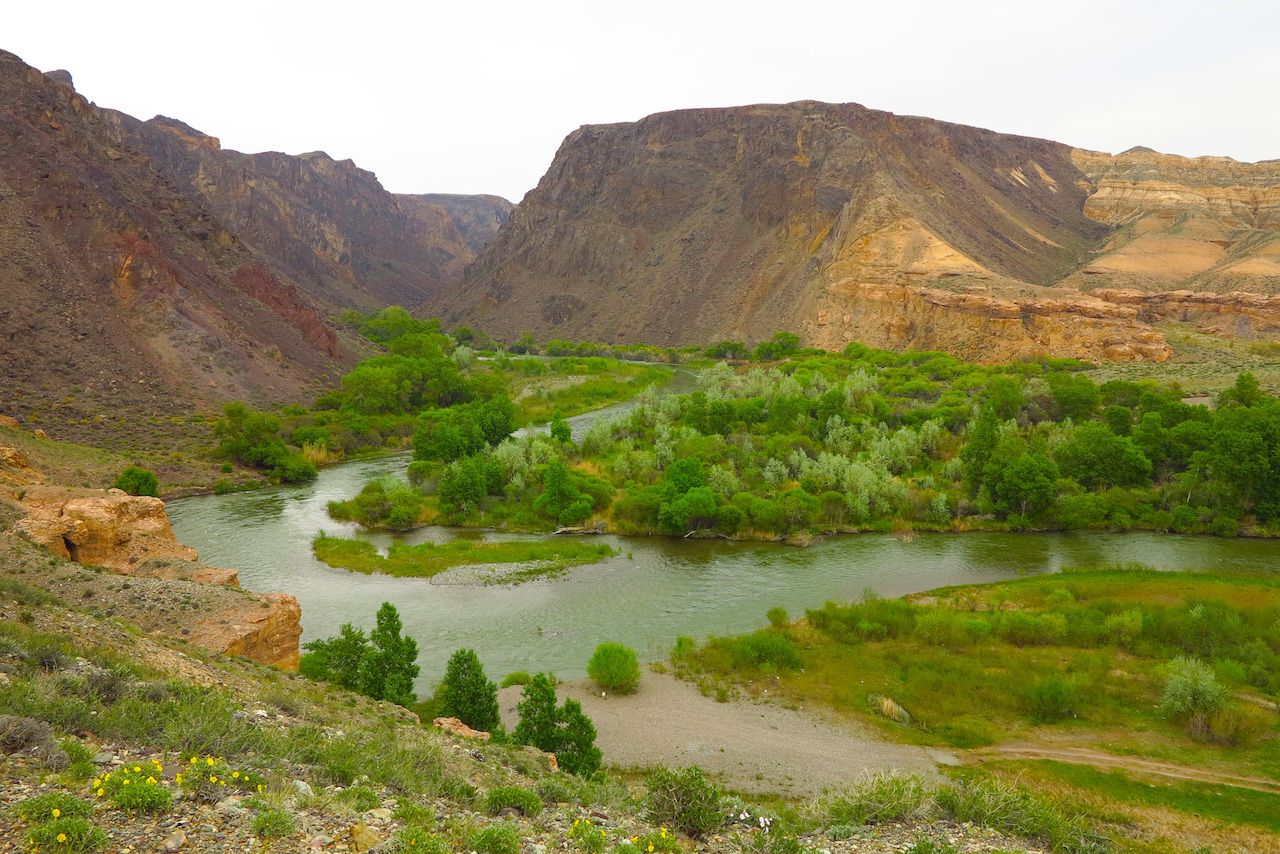 Mountaineers will love the challenge of scaling the two most northerly peaks over 23,000 feet (7,000 meters). Jengish Chokusu (Victory Peak) and Khan Tengri (Lord of the Spirits) both tower amongst the clouds of the Tian Shan, which translates to the Mountains of Heaven, range located in the borderlands of Kazakhstan and Kyrgyzstan.

Hiking or 4×4 tours guide visitors beneath the colorful, castle-sized rock formations of the Charyn Canyon as they wind up toward stunning panoramic viewpoints of the valleys and river below. Located just a few hours east of Almaty, visitors often describe the canyon as more impressive in scale than the Grand Canyon, especially since there are far fewer tourists. Here, you can whitewater raft, canoe, and fish for the local “naked osman” that calls the waters of the Charyn River home.

For those who enjoy their solitude, head to the endless steppes of Kazakhstan where blades of grass sway in the breeze as far as the eye can see. Here, Kazakhs revere their horses above all animals. You can ride said horses, watch locals hunt with falcons, and expand your palate with horse meat dishes like kaza (hot and cold horse-meat sausages) or kumis (salty, strong fermented mare’s milk). 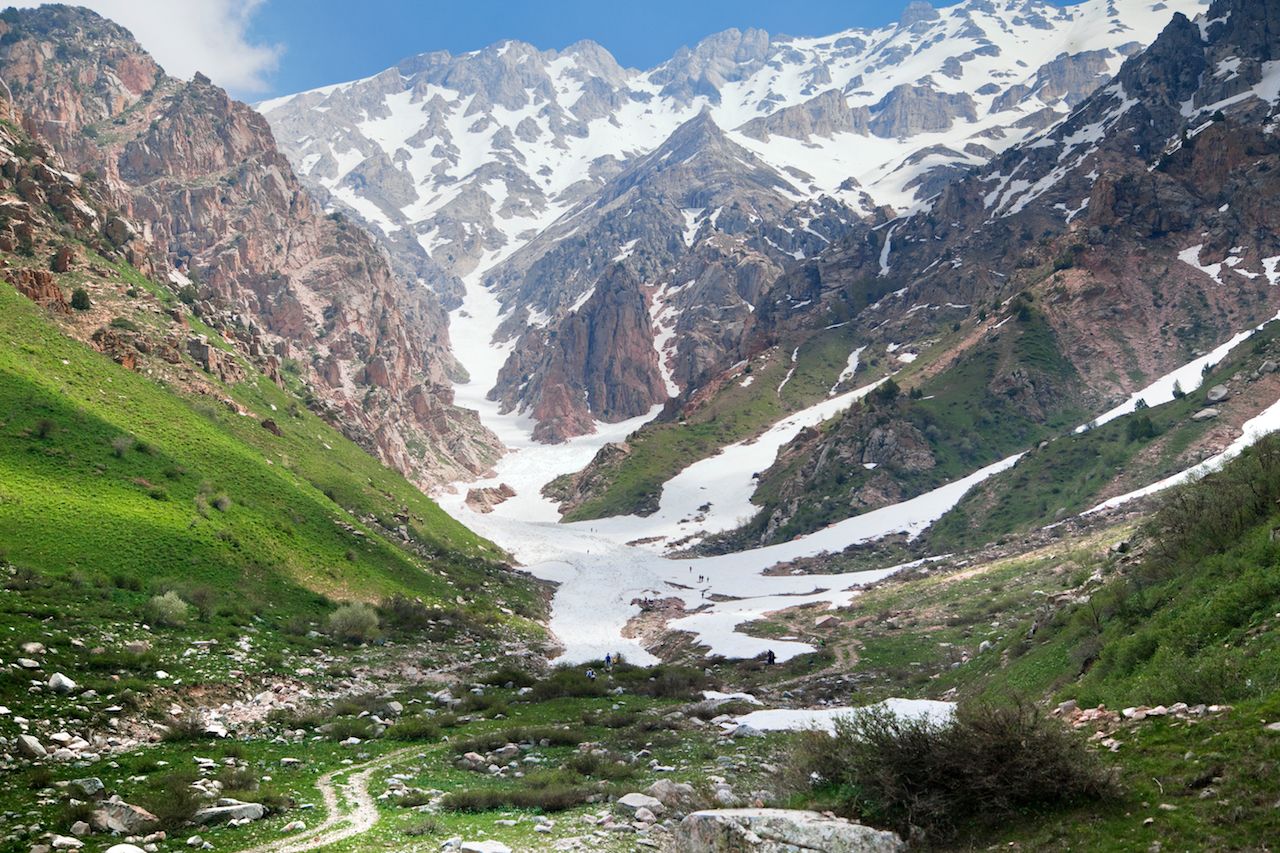 Outdoor activities aren’t limited to Kazakhstan, though. You can also access the Western Tian Shan skiing complex of Chimgan less than two hours from Tashkent, the capital of Uzbekistan. Family-friendly fun awaits guests in “Uzbek Switzerland” throughout the seasons, from lush green hills to hike and lakes and waterfalls to cool off in during summer to fresh powder for skiing and snowboarding in the winter. High-altitude trekking in Tajikistan is a once-in-a-lifetime opportunity for the well-prepared, during which hardly any other foreigners will be sharing the craggy Pamirs — home to some of the highest peaks in the world and awe-inspiring mountain glaciers — with you. 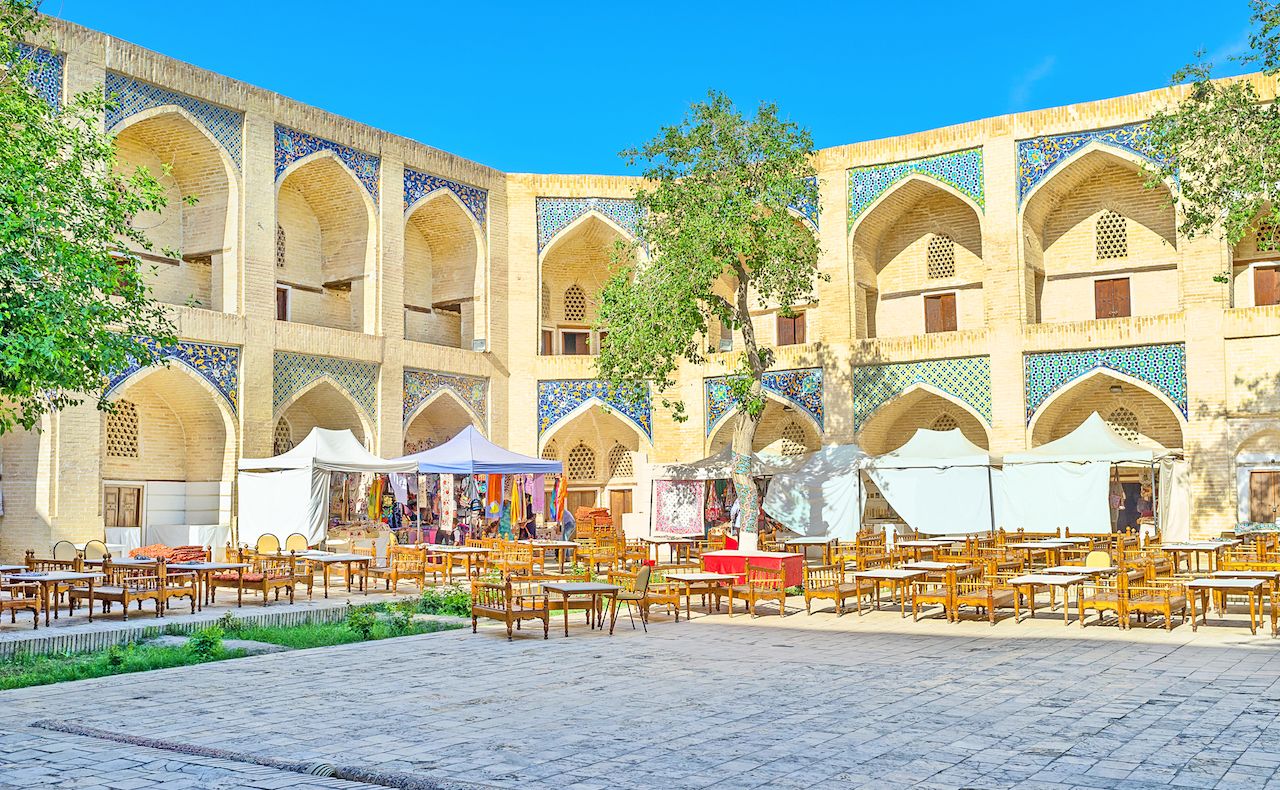 The cafe scene is popping in Central Asia, with the added bonus that your dollar or euro is going to go much further here — a Coke in Kazakhstan is about 50 cents while a pint of domestic beer or an Americano will run you around $1. While Central Asia may not be known for having the best coffee in the world compared to major urban hubs, it’s the atmosphere of the cafes and teahouses, known as chaikhanas, you won’t want to leave. Locals welcome visitors warmly with open arms, so stretch those legs and explore — you may not always see a clearly marked sign, but follow your nose. And while Islam is the major religion practiced in the region, don’t worry if you enjoy an adult beverage now and then. Alcohol consumption is legal throughout the region, and you’ll find it’s easily available.

The cuisine has always been on point. 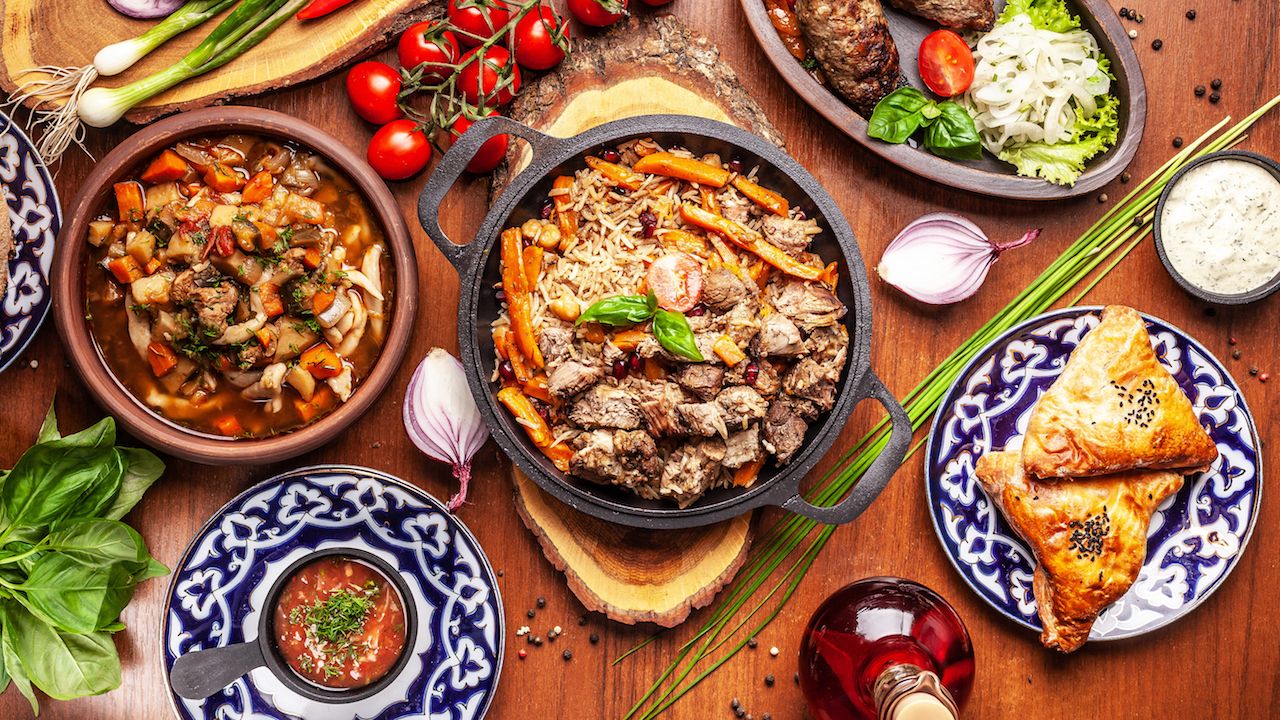 An old proverb says, “Only wolves eat more meat than Khazaks,” and this holds true for most of Central Asia. You’ll find it’s included in most of the hearty local meals, influenced as they are by Soviet cuisine. But there is one difference adventurous eaters will appreciate — if it’s not sheep, it’s likely horse meat you’re eating.

Locals cook oily shaslik (usually mutton or horse meat on skewers) over coals, stuff it into manti (dumpling purses) with onions, or bake it into somsa, stuffed pockets that often look like Indian samosas with a different taste, using cylindrical clay ovens. Hunt down the elusive cheese somsa at Zelyony Bazaar in Almaty, Kazakhstan, if you need a change.

You’ll also find stews like shorpa made from boiled mutton served in a stew of potatoes and vegetables, as well as a relic of Soviet cuisine called borscht (meat, beet, and cabbage stew with sour cream) served at many restaurants. Naan bread often accompanies meals, and its consistency varies by region.

For a local specialty in Uzbekistan, try hunon. Also known as khanum, it’s like a steamed tire of dough stuffed with potatoes, onions, spices, and meat then served with thick chaka yogurt, sour cream, or tomato sauce. Kazakhs have their own version of this called zhuta, which traditionally leaves out meat in favor of carrots and pumpkin.

Finally, Central Asia offers some of the best markets in the world due to the ancient Silk Road trading route that ran through the region. Stock up on dried fruit, nuts, spices, and teas, and see what else you can find.

The architecture of Uzbekistan is commanding global attention. 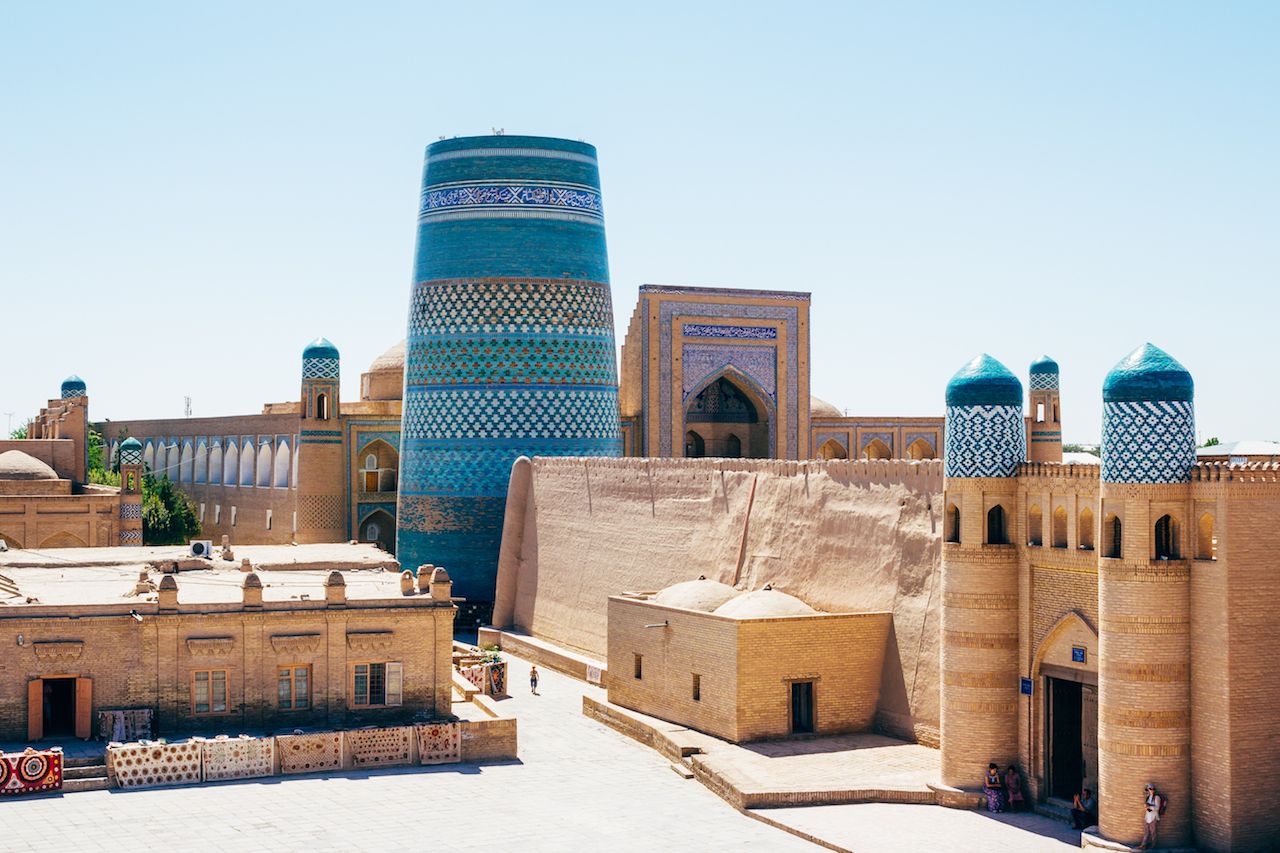 Uzbekistan is home to some of the world’s most unique and photogenic architecture. Uzbeks know this and are more than excited to show it off. Defined by arching palaces and mausoleums, domed mosques, and expansive pieces of artwork depicting the economic and political struggles of the country and region, Uzbekistan has many structures mind-blowing enough that they survived both Mongol and Soviet invasion because neither empire had the tenacity to tear them down.

Get onto the Silk Road and into the mystique of UNESCO World Heritage sites Samarkand and Bukhara, recognized for their roles as “crossroads of culture.” Anytime descriptions of landmarks start with “according to manuscripts,” you know you’re about to visit somewhere special, and history buffs will have a field day in both cities.,,

In Samarkand, you’ll want to start with:

In Bukhara, check out:

The entire region is covered in brilliant mosques and museums. 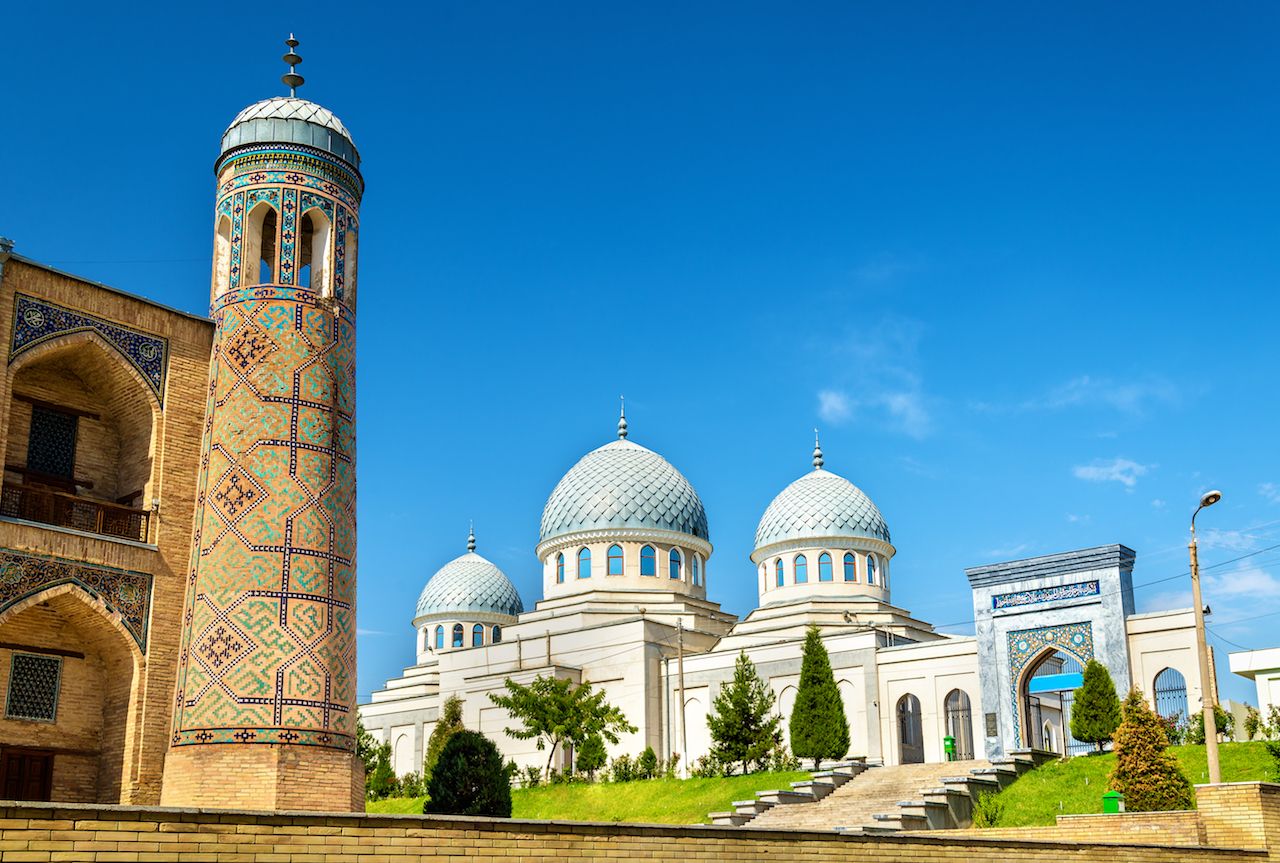 With its role as a mostly Islamic hub set along the ancient Silk Road, Central Asia boasts some of the most beautiful mosques, as well as many museums dedicated to its long history. You’ll have over 2,300 mosques to choose from in Kazakhstan alone.

Starting in the capital of Astana, make sure to check out the towering minarets of the Hazrat Sultan Mosque, Central Asia’s largest mosque. Spend all day learning about the nation’s history in the blue-glass-and-white-marble National Museum of the Republic of Kazakhstan. At night, snap a shot of the strangely alluring Palace of Peace and Reconciliation lit up in different colors. The Palace is a 252-foot-high pyramid built to represent the mix of cultures that live in harmony in Kazakhstan.

Head south to Almaty, the former capital and current Kazakh cultural hub, to see the bright golden domes of the Almaty Central Mosque shine in the sunlight. It’s one of the largest in the entire nation and a must-see when stopping in the city.

As you travel southwest, you’ll find plenty of mosques both ancient and contemporary to visit in capital cities like Bishkek, Kyrgyzstan, and Tashkent, Uzbekistan. Check out the newer Minor Mosque on Tashkent’s Little Ring Road.

There’s the eerie draw of Turkmenistan’s “Door to Hell.” 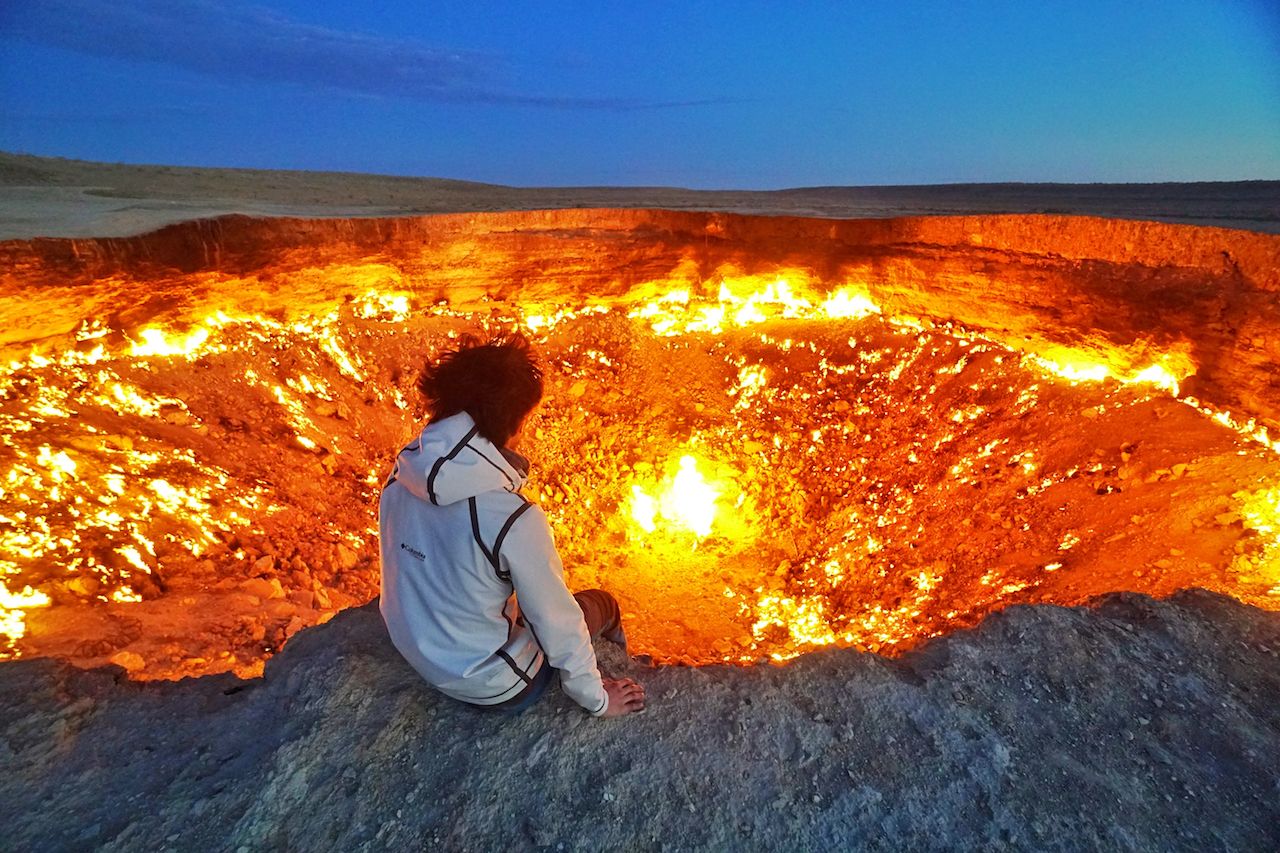 Turkmenistan is the home of the eternal flame — at least in legend. On the outskirts of Darweze sits the region’s most unique and compelling attraction, the Darvaza Gas Crater, better known as the Door to Hell. The crater, created by a gas explosion in 1971, was lit on fire by geologists to prevent the spread of methane gas. These days it essentially looks like a giant wound on the flesh of the earth, and the headlines it creates have increased with visitation. It’s hot, creepy as hell, and sure to provide a profile picture that you won’t ever want to change. You can even take a tour now that allows you to camp right near the flaming crater.

Visas are easier than ever to obtain. 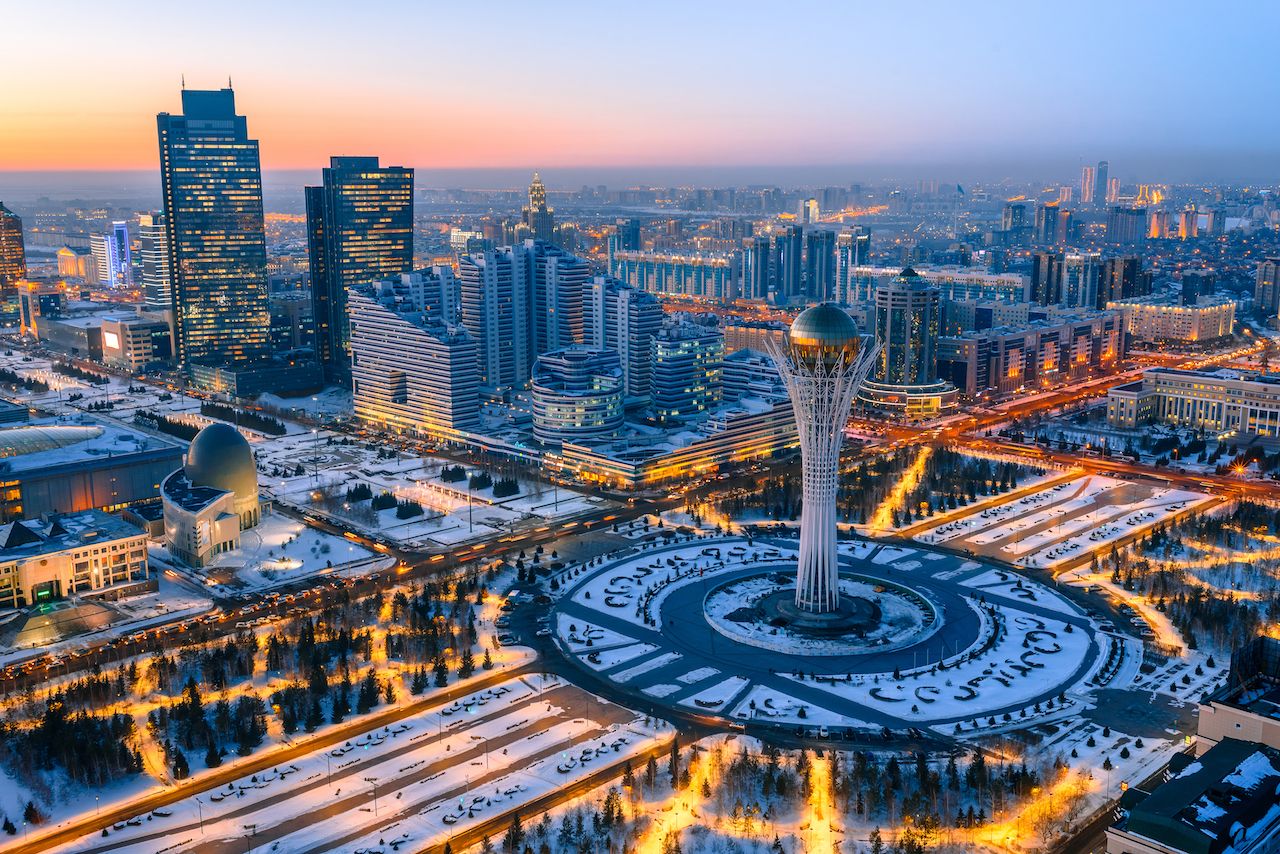 Traveling to the region is easier now than ever before, thanks to increased flights from Europe and the easing of visa regulations. Here’s the lowdown: 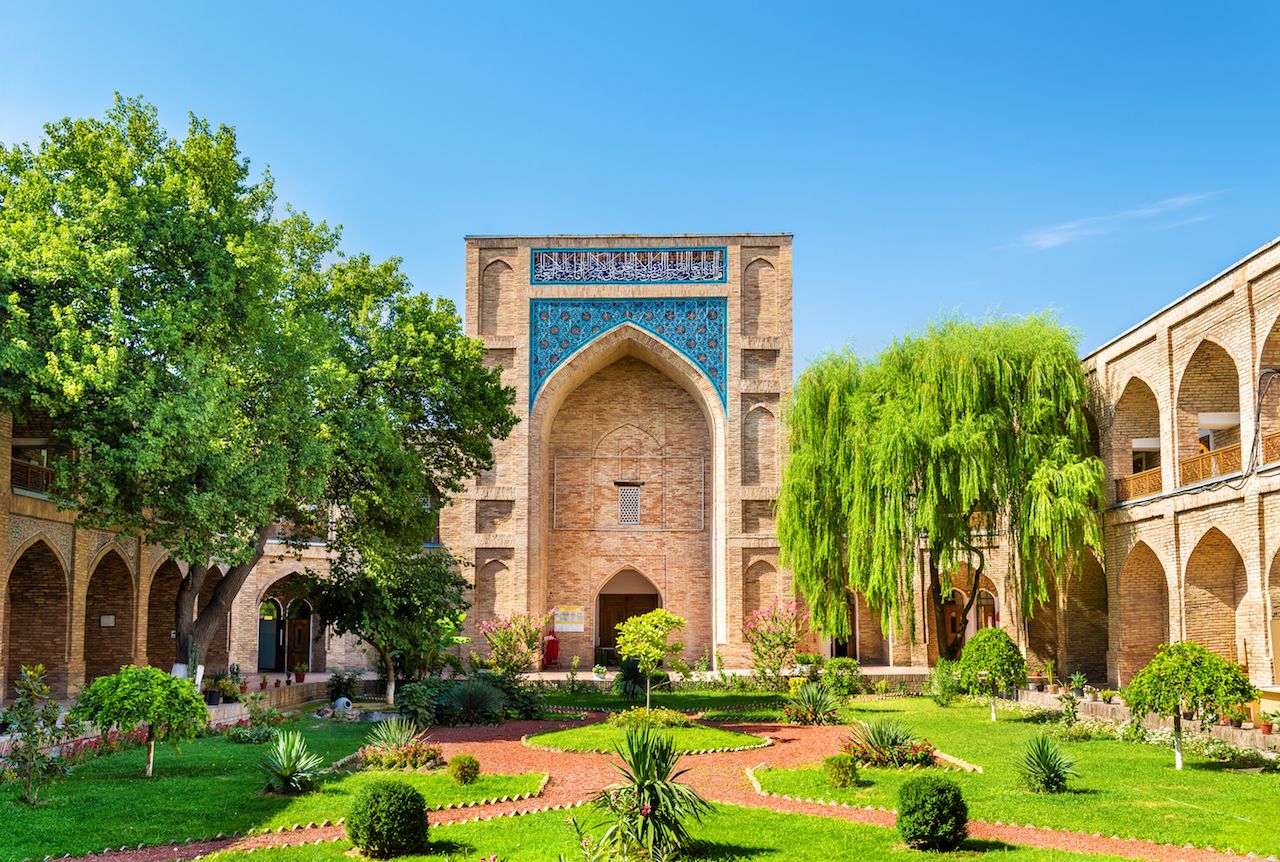 Starting in July 2018, travelers from specific countries like the US can now pay $20 for an eVisa, which requires a simpler application process and takes only two work days after the day you apply. Just make sure you apply a minimum of three business days before your expected date of arrival. For more information, visit the US Department of State website. 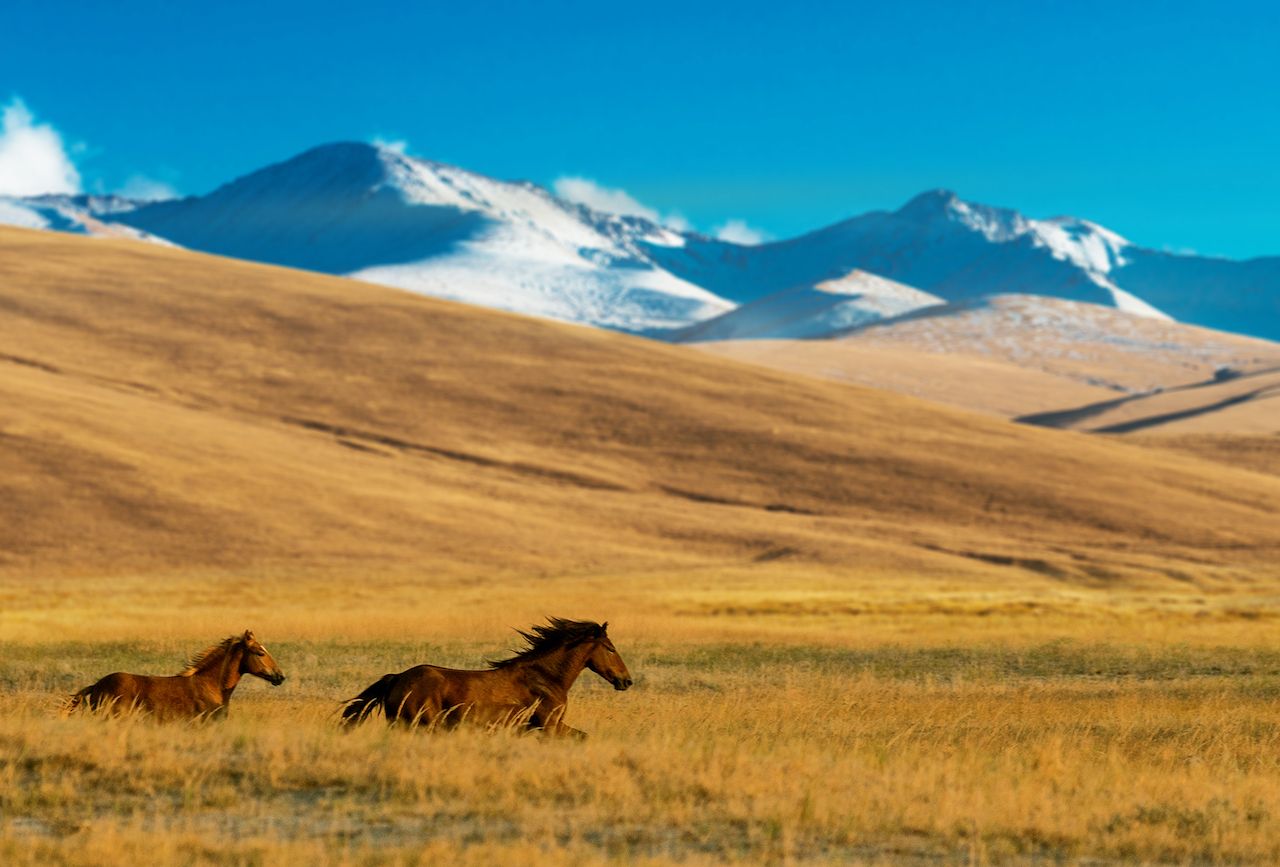 US citizens can visit Kazakhstan for up to 15 days without a visa as long as you’re not there for employment or missionary work. If you’re looking to stay longer, you can apply for a 10-year Kazakhstani visa with stays of up to 60 days for business and 30 days for tourism. For more information about visas, visit the official US Embassy and Consulate in Kazakhstan website. 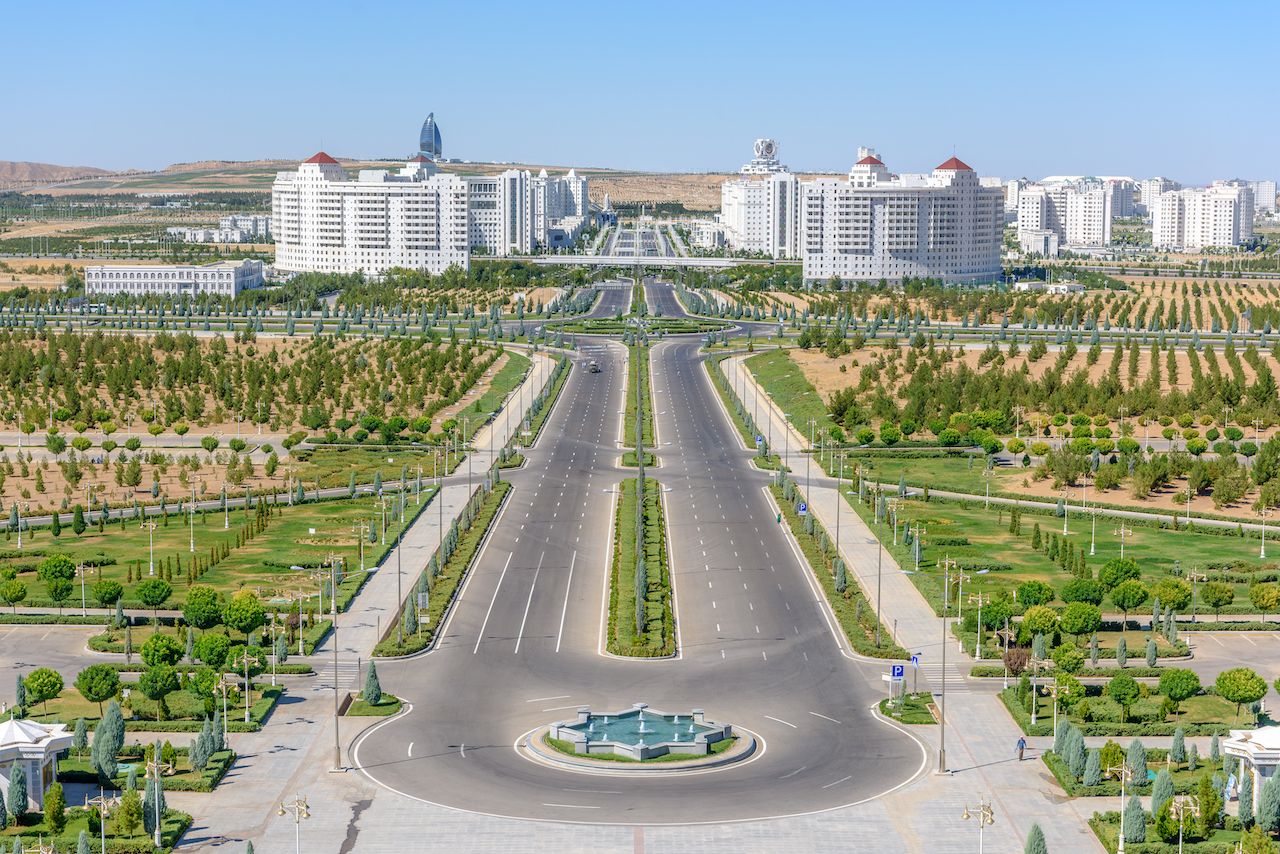 US citizens must have a full-page open on their passport and apply for a visa in advance. You also must have a letter of invitation approved by the State Migration Service (SMS) in Ashgabat. Find more info and apply through the US Embassy in Turkmenistan. 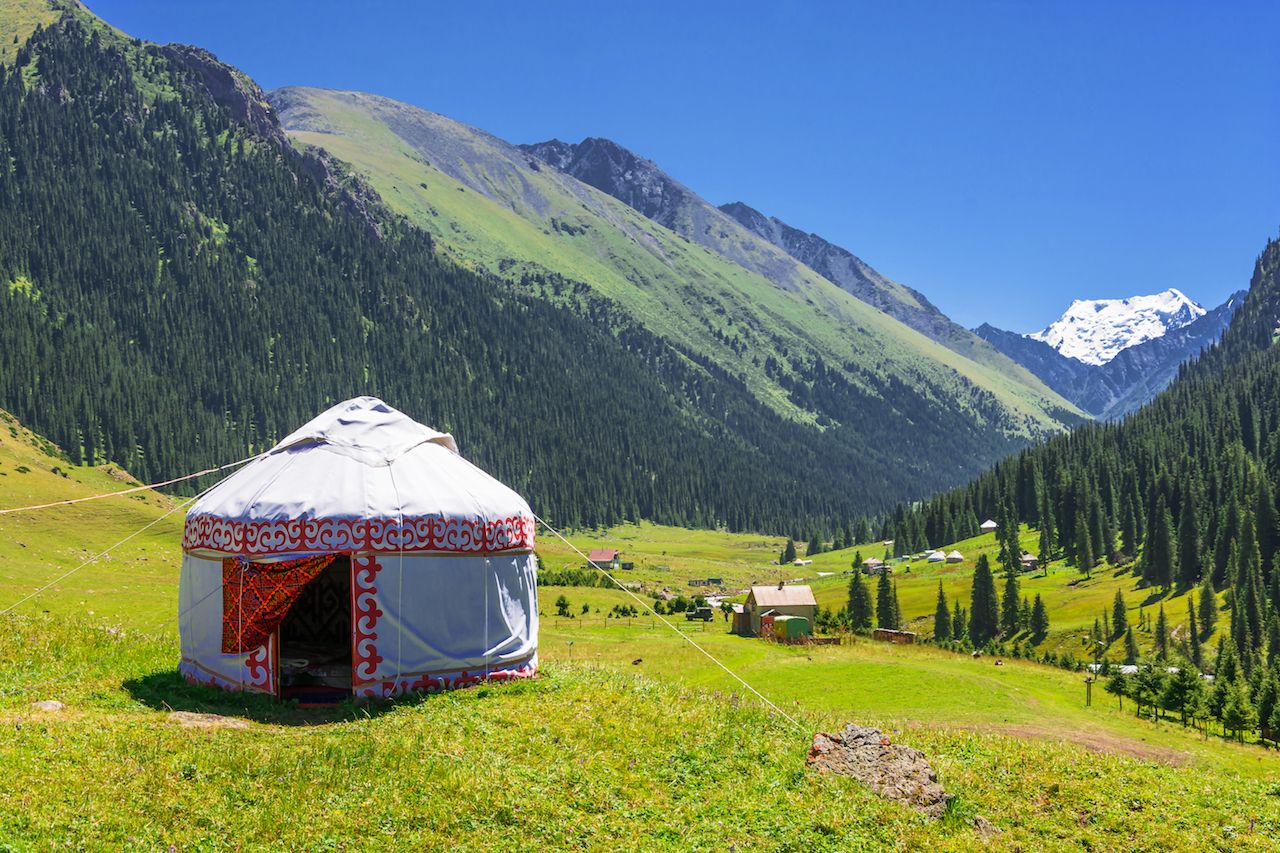 If you are a citizen of the United States, or one of several other countries like the UK and Canada, you can visit Kyrgyzstan up to 60 days without obtaining a visa. If you intend to stay more than 60 days, you need to obtain a three-month visa at the Embassy of the Kyrgyz Republic to the USA & Canada. 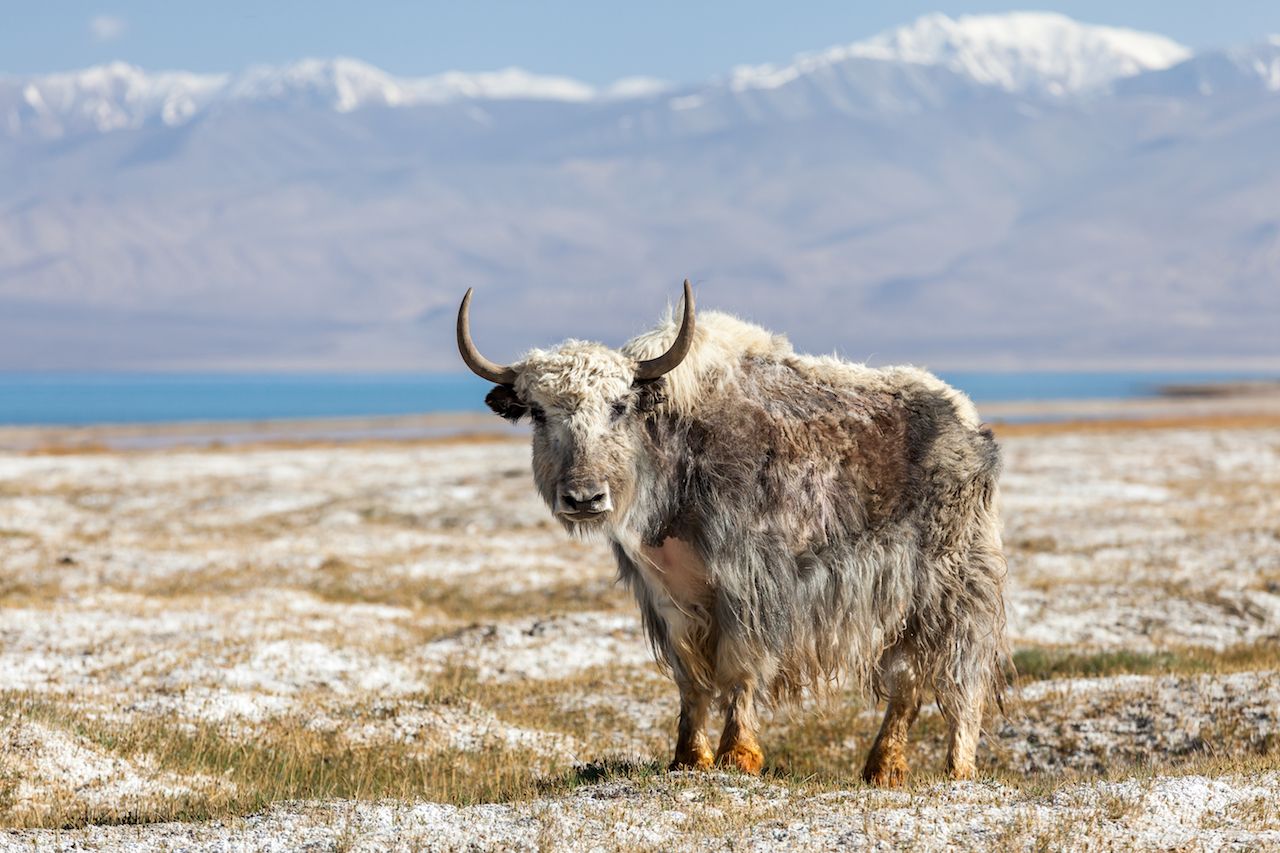 US citizens can obtain a visa in three working days through the country’s new e-visa system. The visa costs $50, and you will, of course, need a valid passport.

Culture13 of the Most Underrated UNESCO Sites You Need To Visit
Tagged
Insider Guides
What did you think of this story?
Meh
Good
Awesome