New York City is full of dive bars with happy hours, beer and shot specials, and well drinks galore. But sometimes, you just want to have a nice glass of wine and drink it in an establishment that will have more than the house chardonnay. While atmosphere is key, people assume all wine bars are pretentious and expensive, and they’re often apprehensive about going inside if they aren’t knowledgeable enough about wine. Yes, New York City can be expensive, as can wine, but there plenty of places where you can go to get your money’s worth without breaking the bank and feel at ease. From a rooftop doubling as an urban vineyard and winery to a wine and oyster happy hour, here’s where to drink wine in New York City. 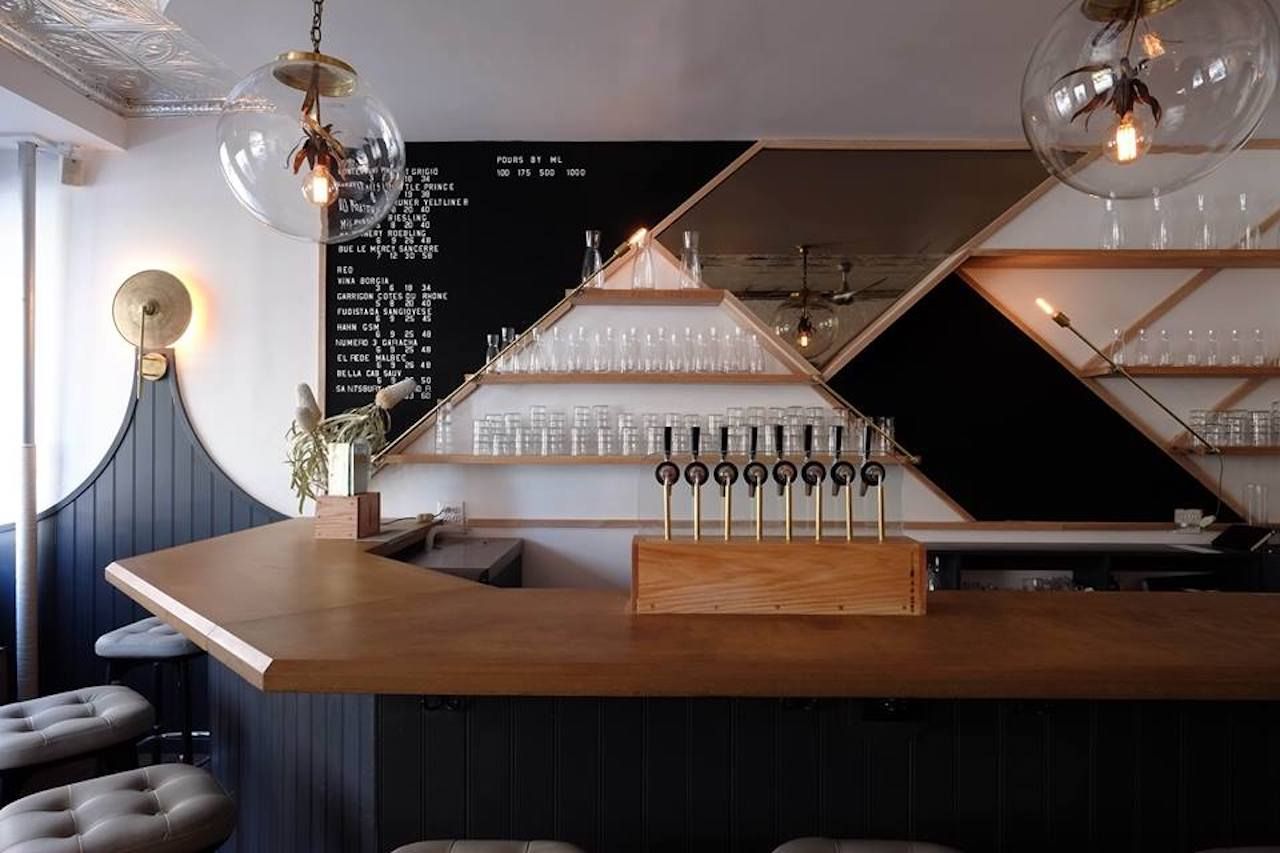 You’ve heard of bars and breweries with an endless number of beers on tap, but what about wine on tap? That’s exactly what Lois has on offer — instead of serving wine from the bottle, Lois has 16 wines on tap to keep prices low and reduce waste. Owners Nora O’Malley and Phoebe Connell created the wine bar with the idea that accessibility and quality when it comes to wine are not mutually exclusive. In 2015, Lois became the first bar in NYC to ban tipping and pays its employees an increased wage due to such. Prices range from $7 to $60, and there’s a rotating menu of small plates in case you get hungry. 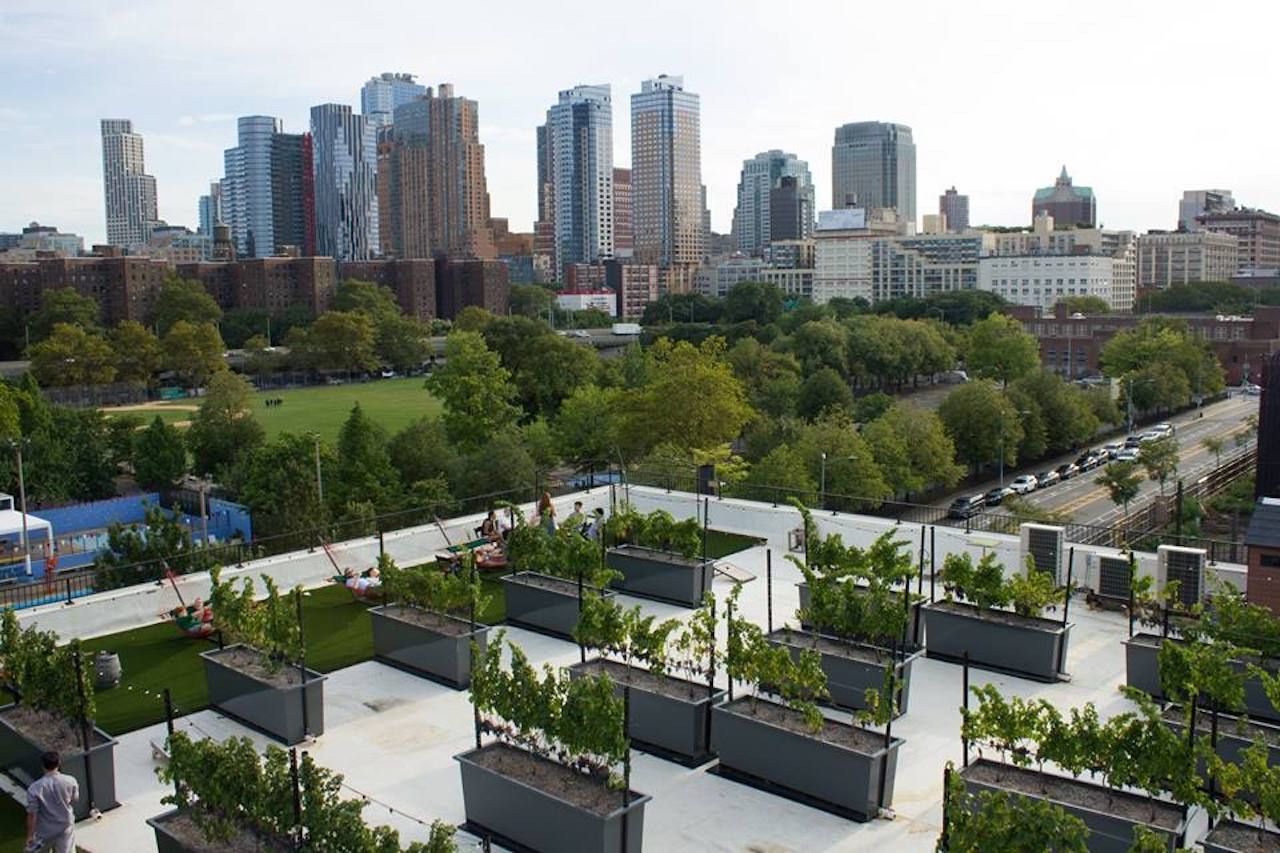 An urban city likely isn’t the first place that comes to mind when you think of vineyard destinations, but a company down in Brooklyn is changing that. Opened in 2015, Rooftop Reds is the first commercial vineyard and winery on a rooftop in the world. The unassuming exterior and lack of signage may lead you to believe you’re in the wrong place, but make no mistake, you’re right where you need to be. Follow the directions from your navigation app and then find Building #275, which, once inside, turns into the rooftop and wine bar.

The space is huge at 14,800 square feet, and it has 42 planters to grow its grapes, which are then used to produce Rooftop Red’s six wines. Admission is free, but you’ll have to make a reservation to visit; spots for the winter are full but keep an eye on the website for when spring spots open up. No outside alcohol is allowed, but you can bring whatever you want food-wise. In addition to wine and a great view of the area, visitors can enjoy pop-up dining experiences, tastings, pizza and wine movie nights, barbecues, yoga, viticulture tours, and the like.

With six locations in NYC, Bar Veloce proclaims itself to be “New York’s modern wine bar.” The interior is exactly that with brick walls and columns, a large communal table surrounding the entirety of the bar, and tons of wine bottles on display. There’s a daily happy hour from 5:00 PM to 7:00 PM with prosecco, Rosato, and red wine for $7 a glass. Otherwise, prices start at around $11. Bar Veloce also serves cocktails and spirits, as well as small plates of Italian food, paninis, and dessert.

Where: Multiple locations in NYC 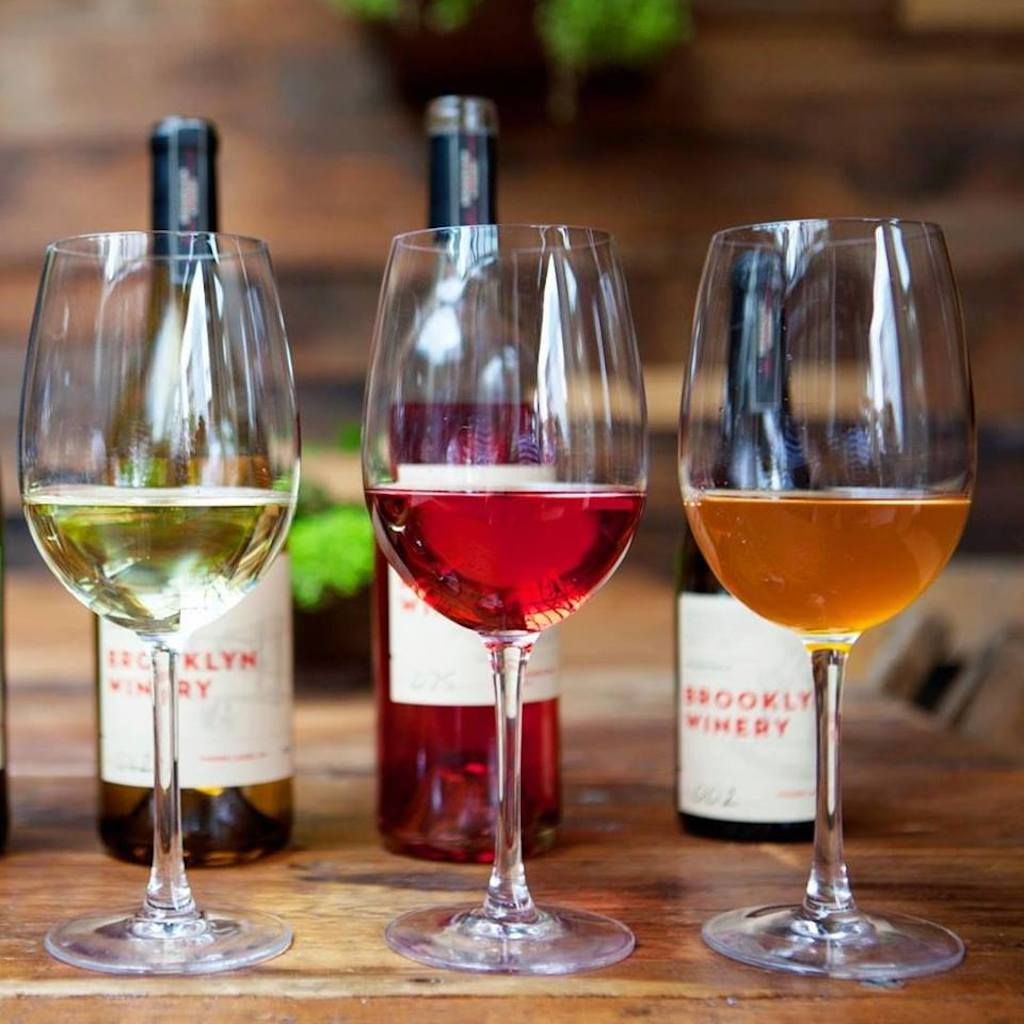 In Brooklyn, there’s brewery after brewery popping up. And now, the borough can add wineries to the list of cool establishments within its purview. Brooklyn Winery is an industrial, urban winery in Williamsburg where winemaker Conor McCormack heads onsite production of its small-batch wines. Tours of the 8,000-square-foot space are available, which also include a tasting of select wines; these can sell out quickly, so you’ll have to check the website to see if more tickets have been added.

Even if you can’t nab a spot on the tour, the wine bar is worth checking out and offers a relaxing environment to try some local wines you wouldn’t be able to otherwise. It’s furnished almost completely with reclaimed materials — its biggest wall is made from barn wood and decorated with greenery, WWII ammo boxes are used as wine racks, and the wood on the bar itself is from church pews. Prices for a glass start around $12, but you can also purchase wine flights, a half bottle, or full bottle. If you need something else to fill you up, there’s bar snacks, antipasto, shared plates, and dessert. 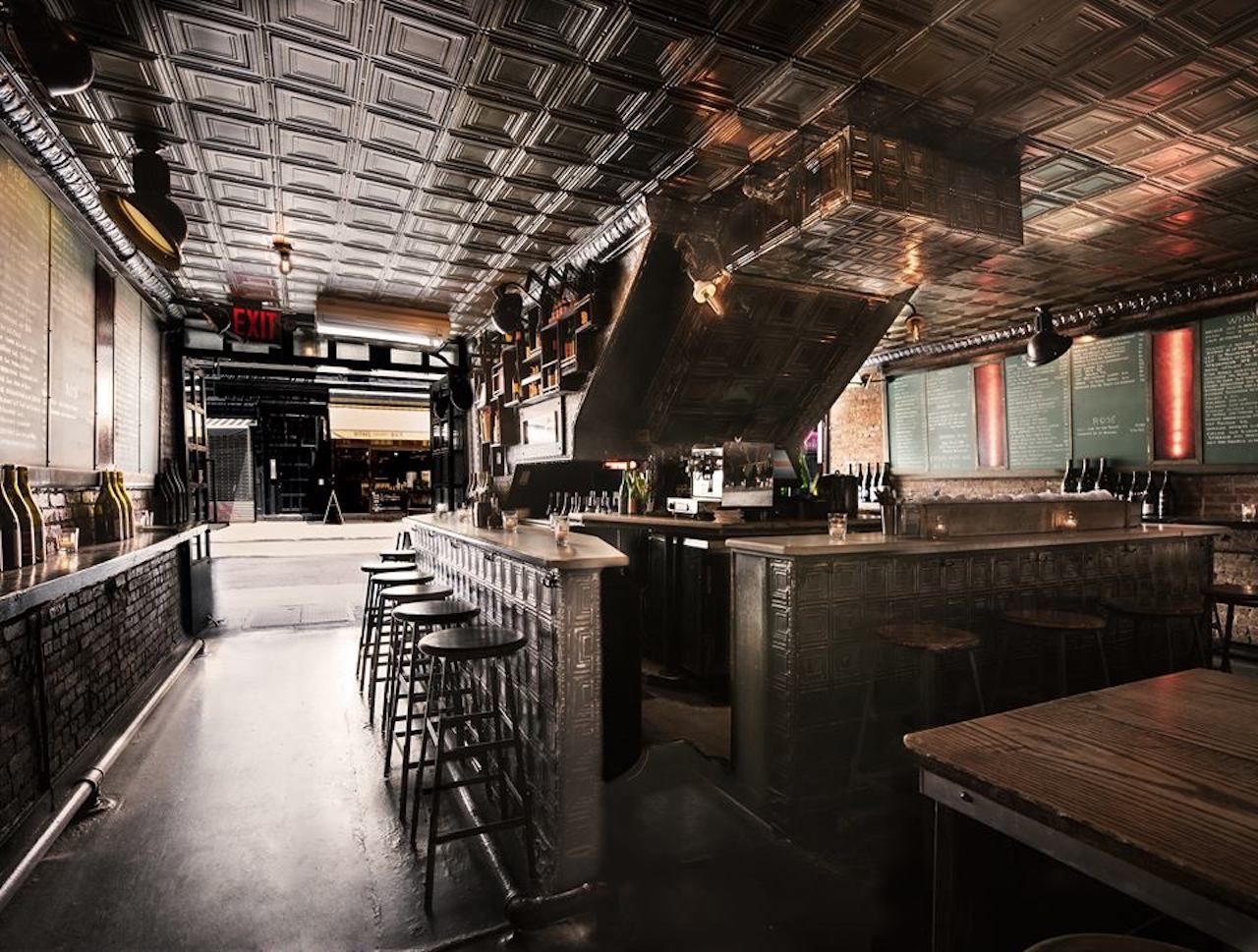 Wine and oysters are a great combo, and that’s what The Ten Bells does best. While the food has Spanish influence and is served as tapas, the wine list mainly consists of French natural wines produced from organic and biodynamic grapes. From opening hours until 7:00 PM, there’s a wine and oyster happy hour where the oysters are $1 and for $15, you can get a carafe of wine. 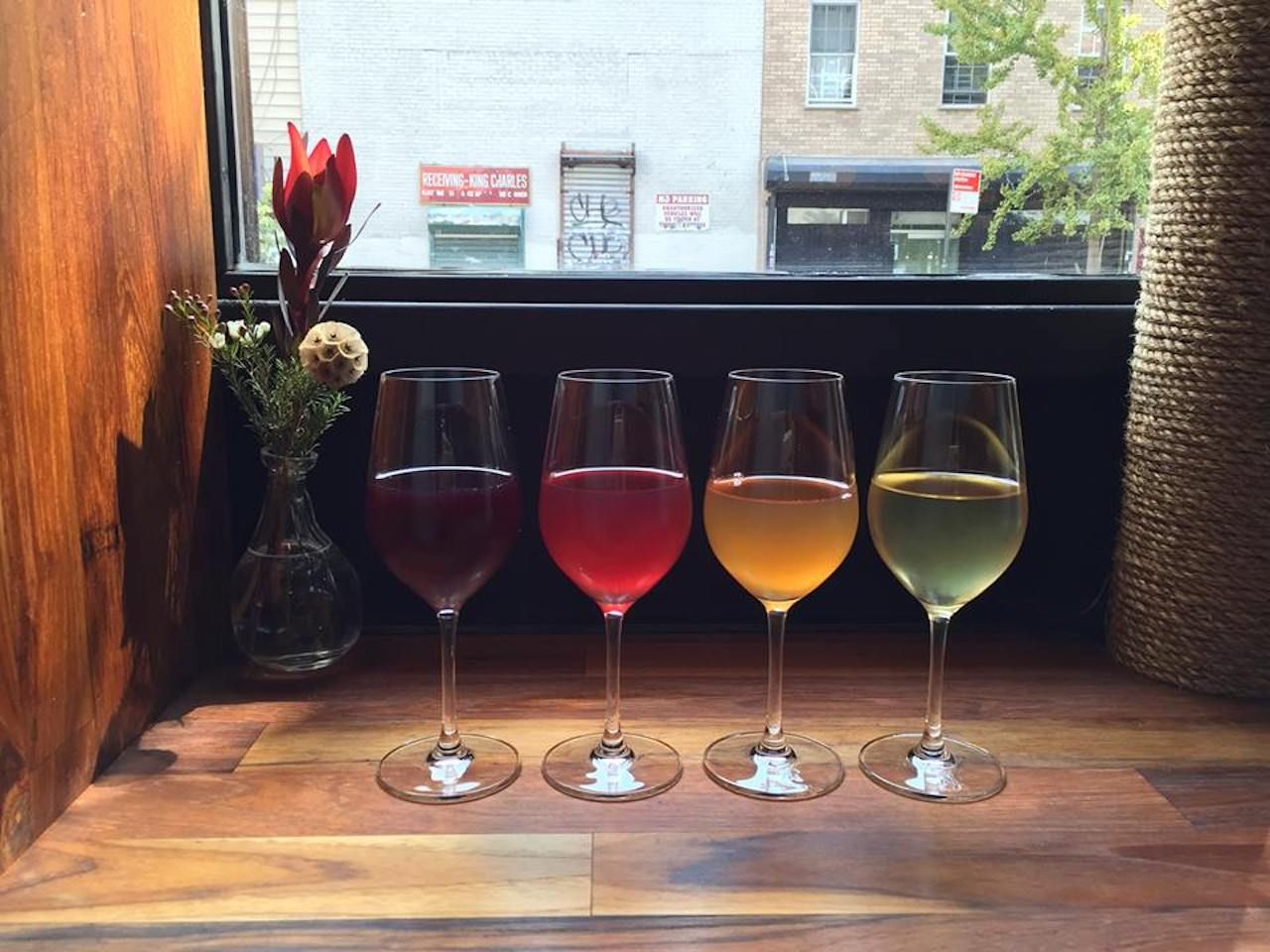 No apocalypse here. Owned by James Murphy, a member of LCD Soundsystem, Four Horsemen is a Brooklyn wine bar designed in a Scandinavian minimalist style. It specializes in underrated wine regions, atypical varieties, and natural production methods. However, the list is fairly limited to regions within France and Italy. While there is meat on the menu, the dishes are heavy on the vegetables. Both reservations and walk-ins are welcome, but if you’re with more than three people or want a table rather than sit at the bar, reservations are recommended. 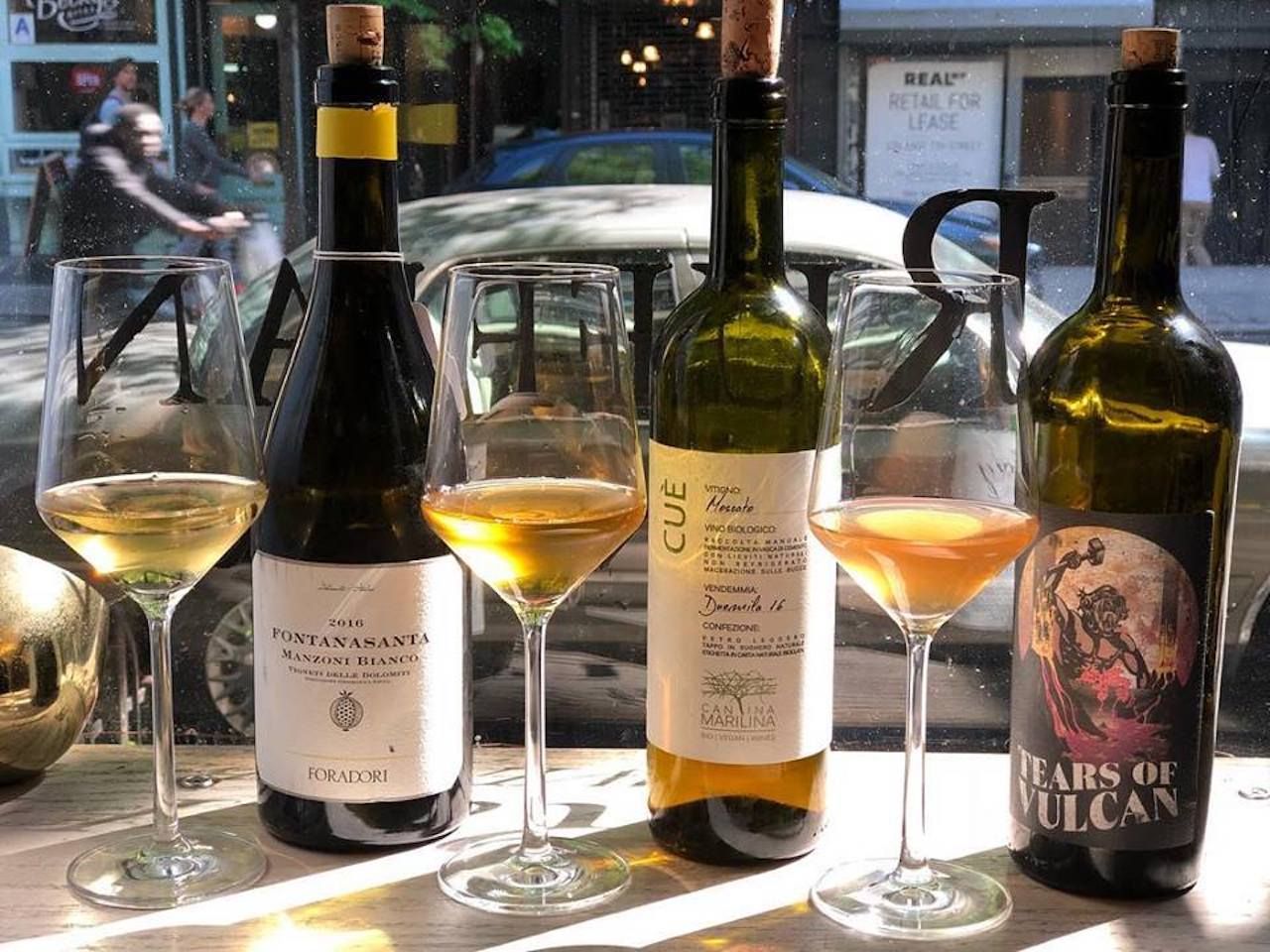 It may not be the largest wine bar you’ve ever been in, but with 19 seats in total, you definitely have an intimate experience to remember at Ruffian. The seating is contrasted by an extensive wine list that includes over 250 natural wines that hail from regions all over the world that one wouldn’t normally associate as good wine places. Many are from Eastern Europe though there are the usual suspects of France, Italy, and Spain, but some are surprising, like the country of Georgia and Chile. A glass here will run you about $13 minimum, but there is a happy hour from 5:00 PM to 6:00 PM Monday to Saturday (and 3:00 PM to 5:00 PM on Sundays). The food menu rotates often, but you can expect a southern French influence.