Have you ever been in a new place and wished you could identify the beautiful bird you saw? Or perhaps caught a glimpse of a rare animal you know scientists are working to track?

If you love nature and want to protect the places you visit but can’t always afford ecotourism activities, consider downloading one of these community reporting or bird apps focused on citizen science. All you need is a smartphone to use these free apps to record and report plant and animal sightings.

I’m a Ph.D. researcher at the University of Melbourne, Australia, and I study how digital technology is being used in citizen-science programs to monitor biodiversity. It’s a more important subject now than ever, considering the decline in biodiversity and population sizes caused by climate change, irresponsible land use, and tourism, among other factors. Many conservation programs receive public support and funding, and they need to be able to show data to demonstrate claims that certain species are in danger, that species are occupying a certain habitat, or that a local ecosystem is somehow key to a species’ survival.

That’s where you, dear traveler, come in. In many cases, it’s enough to take a photo and upload it to a digital platform with a location and timestamp, but there are also more in-depth opportunities to make a difference. In addition to collecting information for databases that inform research and wildlife decision-making, these apps also do a great job of connecting individuals to the natural world and creating a connection between nature and travelers – something that will ultimately make more people care about the great outdoors.

Here are some of the best apps for exploring nature, from bird apps focused on migratory tracking to marine health databases for certified scuba divers. 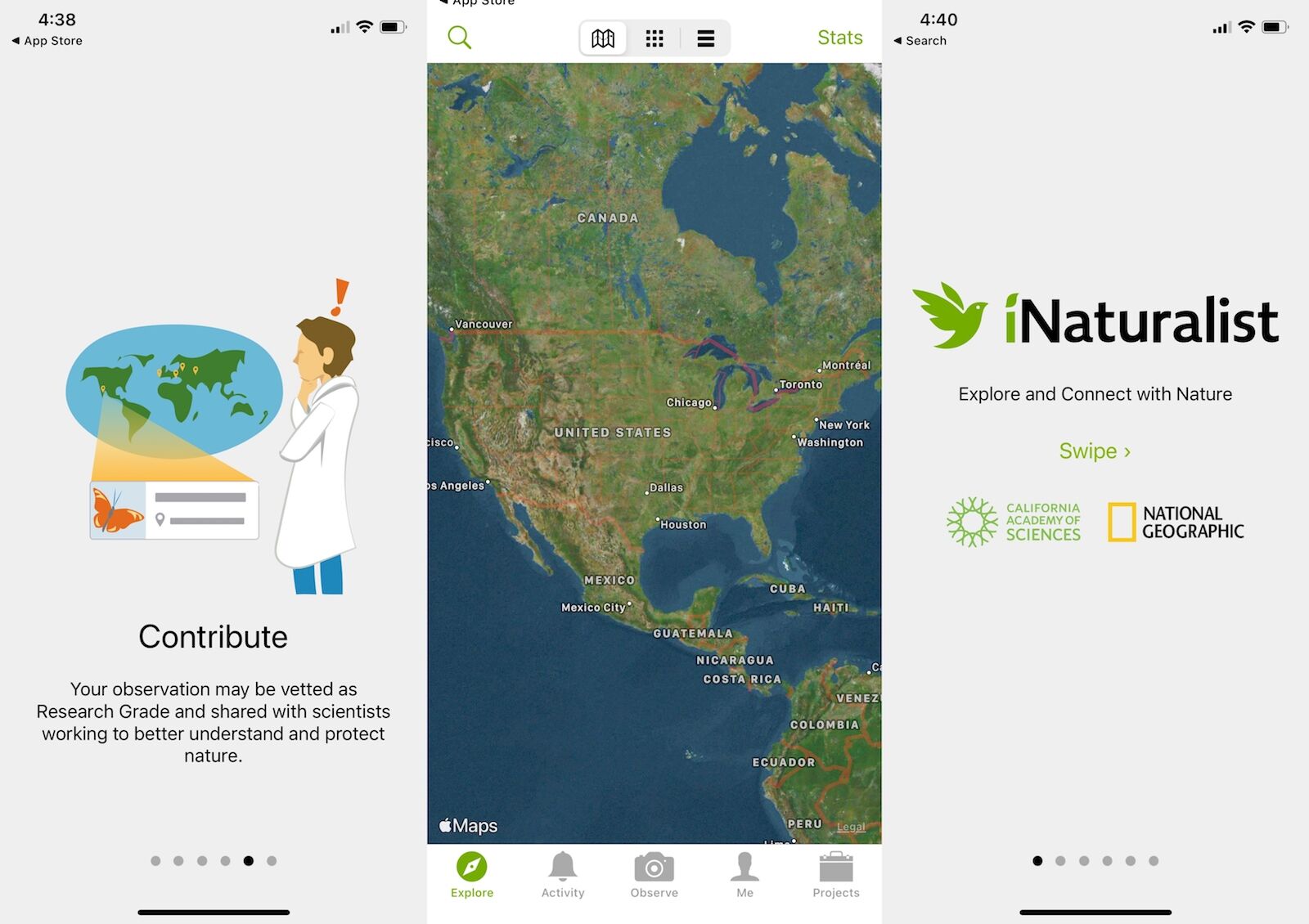 Created in 2008 as a master’s project then further developed and jointly maintained by the California Academy of Sciences and the National Geographic Society, iNaturalist is currently one of the largest biodiversity monitoring hubs in the world.

iNaturalist has millions of recorded observations from observers around the globe. There are over 46 million observations and 1.1 million observers in the US alone. Volunteers include everyone from scientists and nature enthusiasts to environmental activists, experts with local knowledge, biology teachers, and people just starting to learn about the natural world. Of course, travelers are welcome, too.

After you’ve downloaded the app, it’s easy to contribute data to the flora and fauna records simply by uploading photos with location data. Those records or observations will be verified by iNaturalist community members and shared with scientists and government agencies.

The app can also identify insects, plants, or animals from your uploaded photos. Users can also choose to join specific monitoring groups and projects if they have specific interests. Most of those projects are dedicated to monitoring certain places or a specific species (such as the National Park Service project or North American bees) or running a “bio-blitzes” – intensive biodiversity surveys at a particular place at a given time of year. 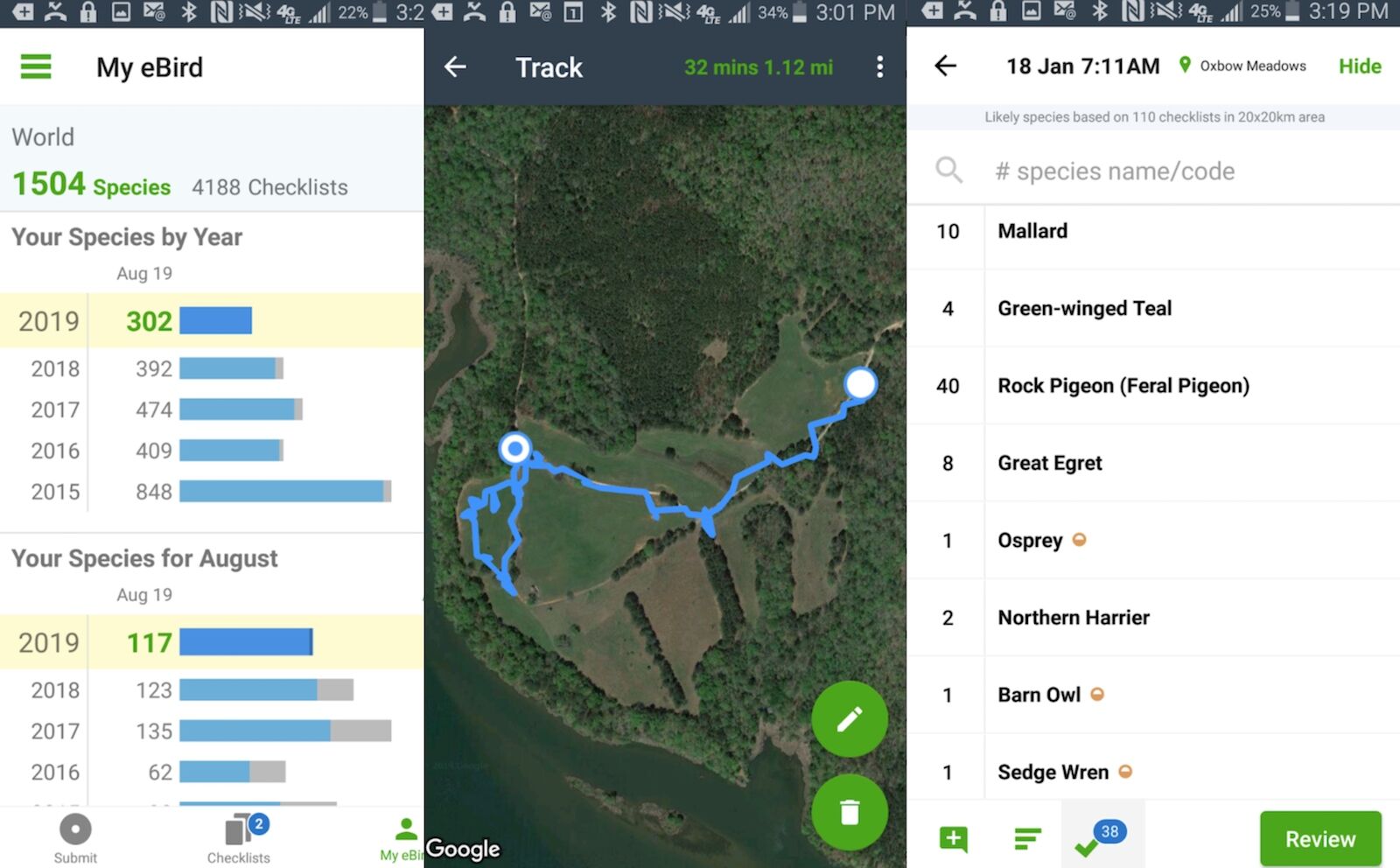 Almost every bird watcher I know uses this app. Created by the Cornell Lab of Ornithology, eBird lets users upload bird sightings with location data to scientific databases like iNaturalist. But it also organizes records of birds you’ve seen plus when and where directly within the app. You can record sightings whether or not you managed to snap a picture of the bird hopping about in the undergrowth.

The bird app’s “explore” function identifies local bird hotspots and shows you what species are most often reported and spotted in the area by season. That gives you a great head-start on what to look for when you arrive in a new place, whether it’s a highly urbanized environment or a coastal mudflat. Birders who take this quite seriously are known as “twitchers” and will travel across the world to add rare birds to their lists – but you don’t need to become a twitcher to enjoy the app. 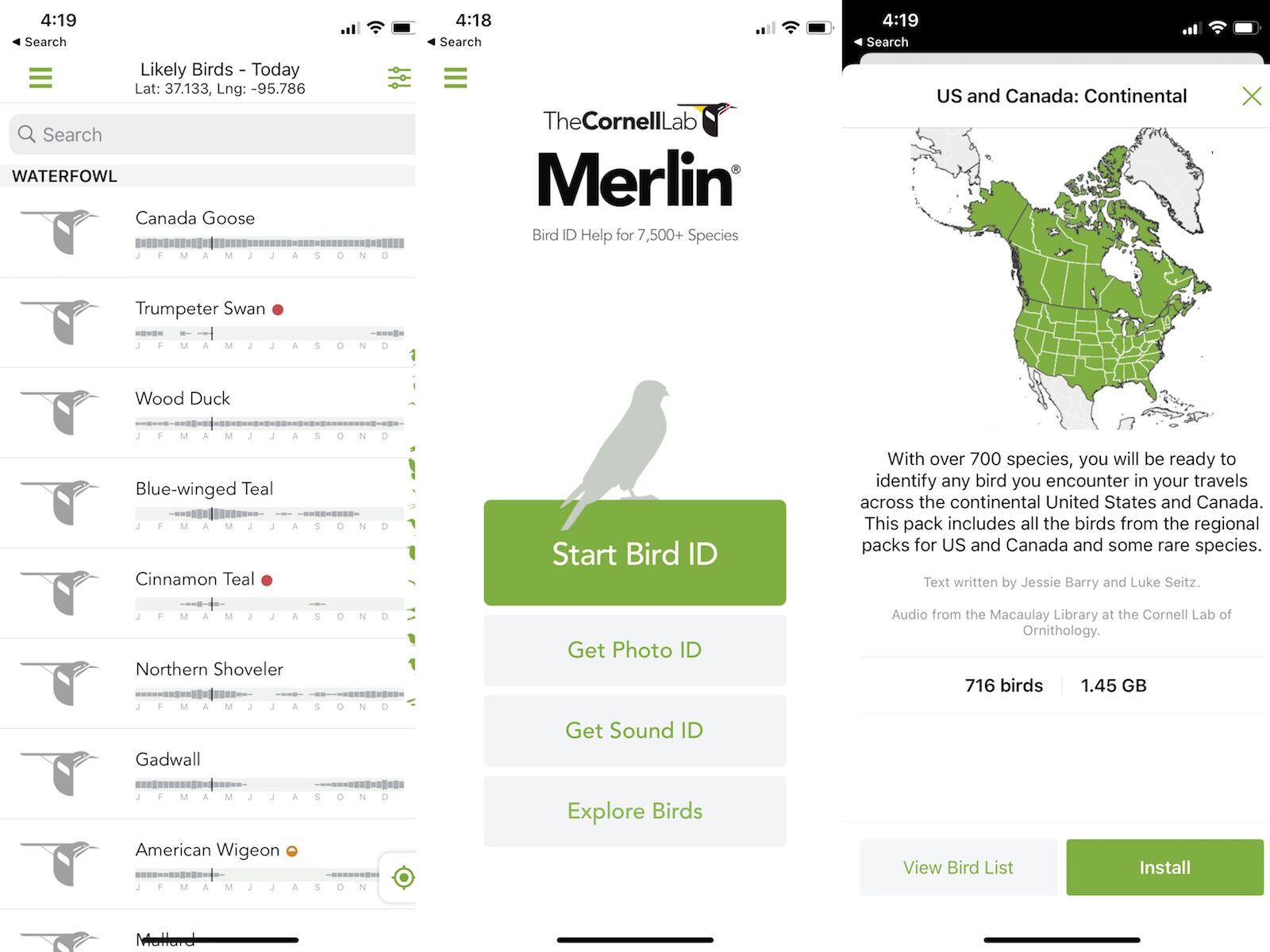 If you want to stick with eBird, you’ll need to download a regional “bird pack,” which you can use as a field guide even without an internet connection. There are other bird app options to make the identification easier, however.

Check out the Merlin Bird ID app and its Photo ID package. Merlin Bird ID also requires you to download a “bird pack,” which includes bird photos and location information, plus an extremely easy-to-use identification system.

I live in Brazil and downloaded the “Birds of Amazonian states” pack. When I want to identify a bird, the app asks me about its size, color, and behavior (Was it soaring? Was it swimming? Was it on a tree?). Based on my answers, the app gives a list of possible birds and photos and behavioral information. I still use eBird to report the sighting as Merlin doesn’t have that functionality, but the apps are linked. So if you have eBird, the Merlin app will ask if you’d like to switch to eBird to report it.

Merlin can also make the identification for you if you download the Photo ID package. You’ll upload a photo, and the app will try to identify it from a collection of more than 8000 bird species. It can even identify birds based on their songs. That Sound ID feature is a work in progress, with around 450 bird songs cataloged as of writing. 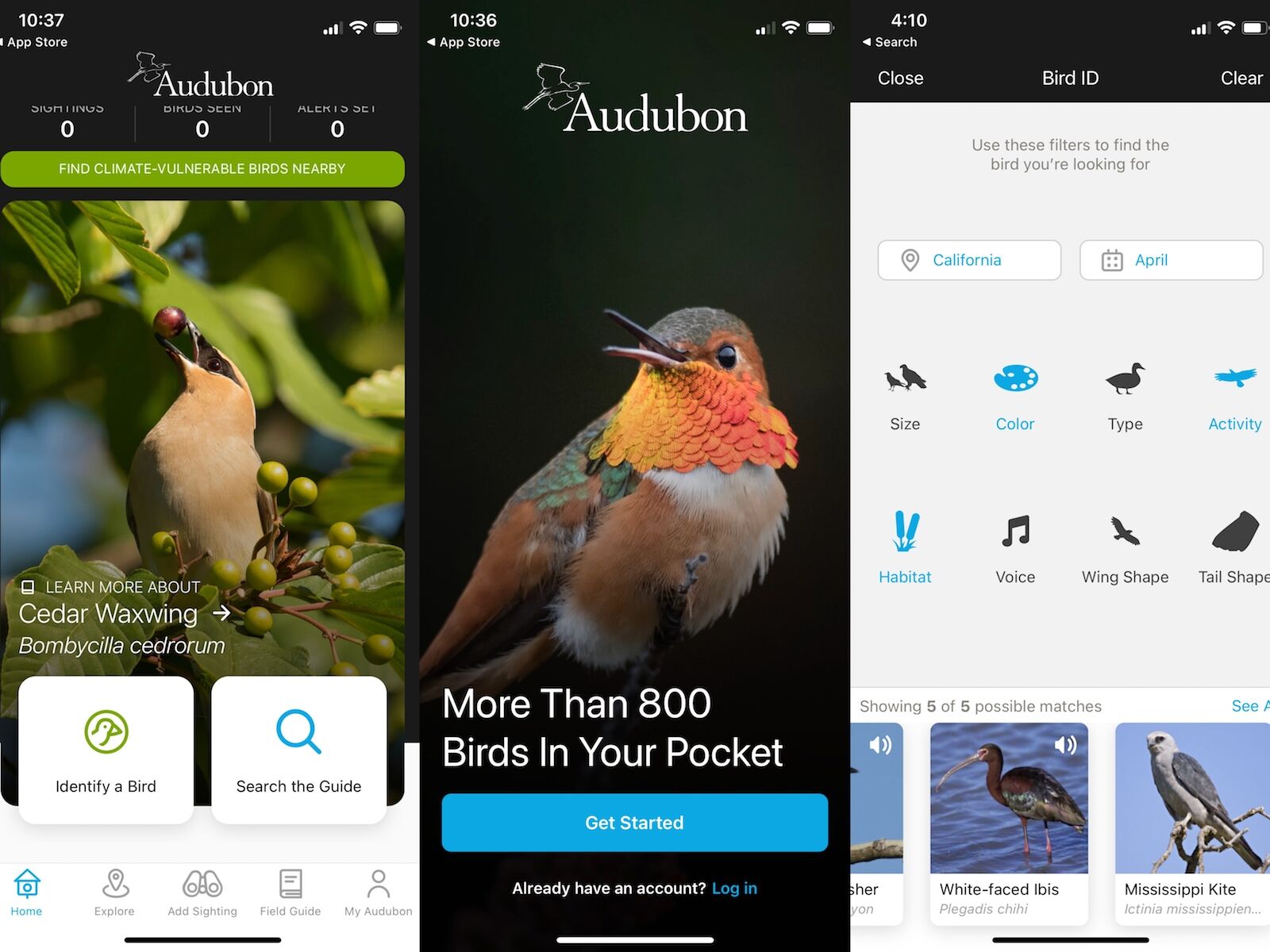 I first learned about Audubon when I saw the gorgeous endangered bird murals in Harlem and Washington Heights, New York. But the organization’s history goes way back. Audubon began practicing “citizen science” with a Christmas bird census back in the early 20th century. The tradition of the Christmas count continues to date and has helped drive legislation and policy within the EPA.

Volunteers can still participate in the count or volunteer with one of 450 local chapters. You can also search on their website with your zip code to find what native plants to grow to attract birds.

The Audubon Bird Guide app doesn’t link directly to research or reporting efforts; it’s more similar to Merlin Bird ID in that the main functionality is around bird identification. However, this bird app has two extra location-based features that make it worth downloading: it can send you a notification if there’s a rare bird nearby, and there’s also a real-time map where you can check what sightings are being reported near you. There’s also a downloadable field guide for offline IDing. 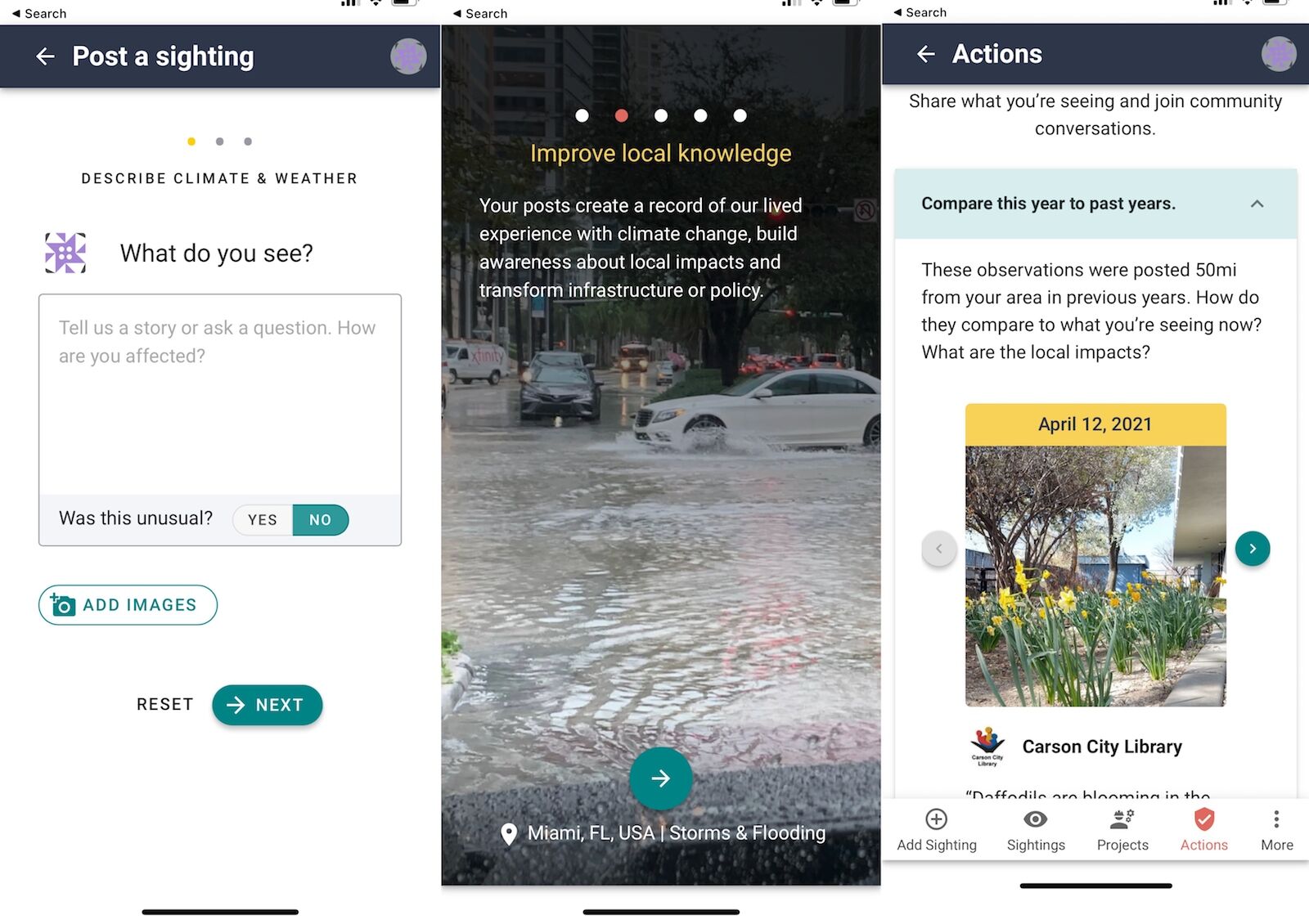 ISeeChange is a citizen science project to track climate change and its impact on communities and ecosystems worldwide, which can directly impact biodiversity. Users can contribute data to projects from organizations around the world that source from ISeeChange. Current projects include one from the City of Miami to monitor flooding and one from the town of Whitby, Canada, to develop a Climate Adaptation Plan. Many local governments use the app’s data to aid in better city planning.

Project participants can record all sorts of information, from plants flowering too early to insects sightings in new areas. You can also report isolated sightings not tied to a project, like weather anomalies or strange animal behavior. 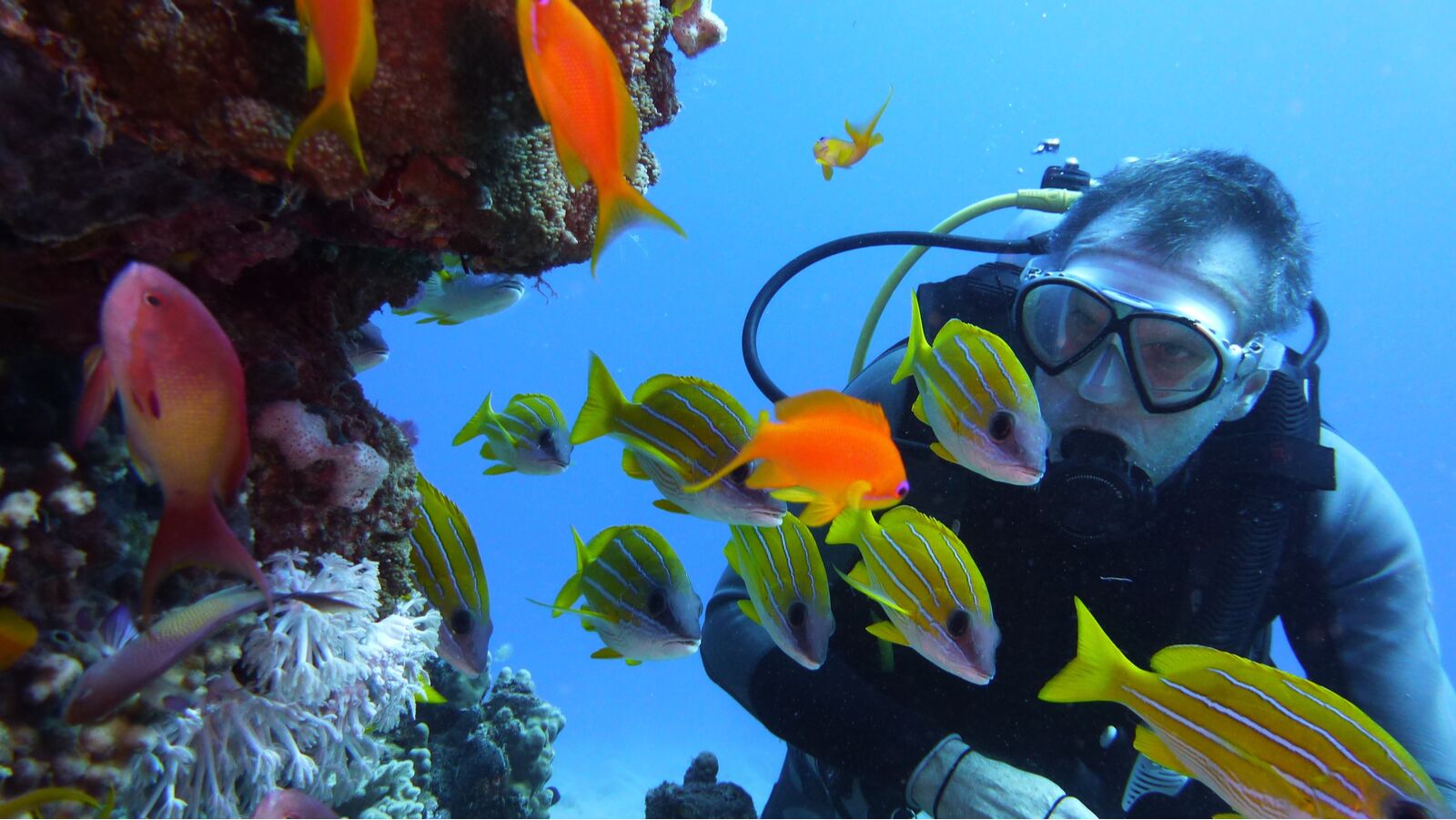 Unlike with most bird apps, this project is not for everyone. You need to be an experienced diver to do reef surveys and report marine life. And by “experienced,” the organization means divers with an advanced open water certification and at least 50 dives, 10 of which have to have been in the past year. You can also volunteer if you’re a dive boat owner or a web developer or database expert who can help curate the survey data. But that’s about it – so yeah, pretty niche.

But if that is you, participating in the Reef Life Survey (RLS) aids the efforts of scientists and volunteers to monitor reefs around the world and inform their management. With the help of volunteers, the organization has already done more than 27,000 surveys, which resulted in 87 scientific papers and management reports. You can see the survey results in this cool map. Even if you don’t plan to participate in a marine survey, the map could help you plan your next diving or snorkeling trip. 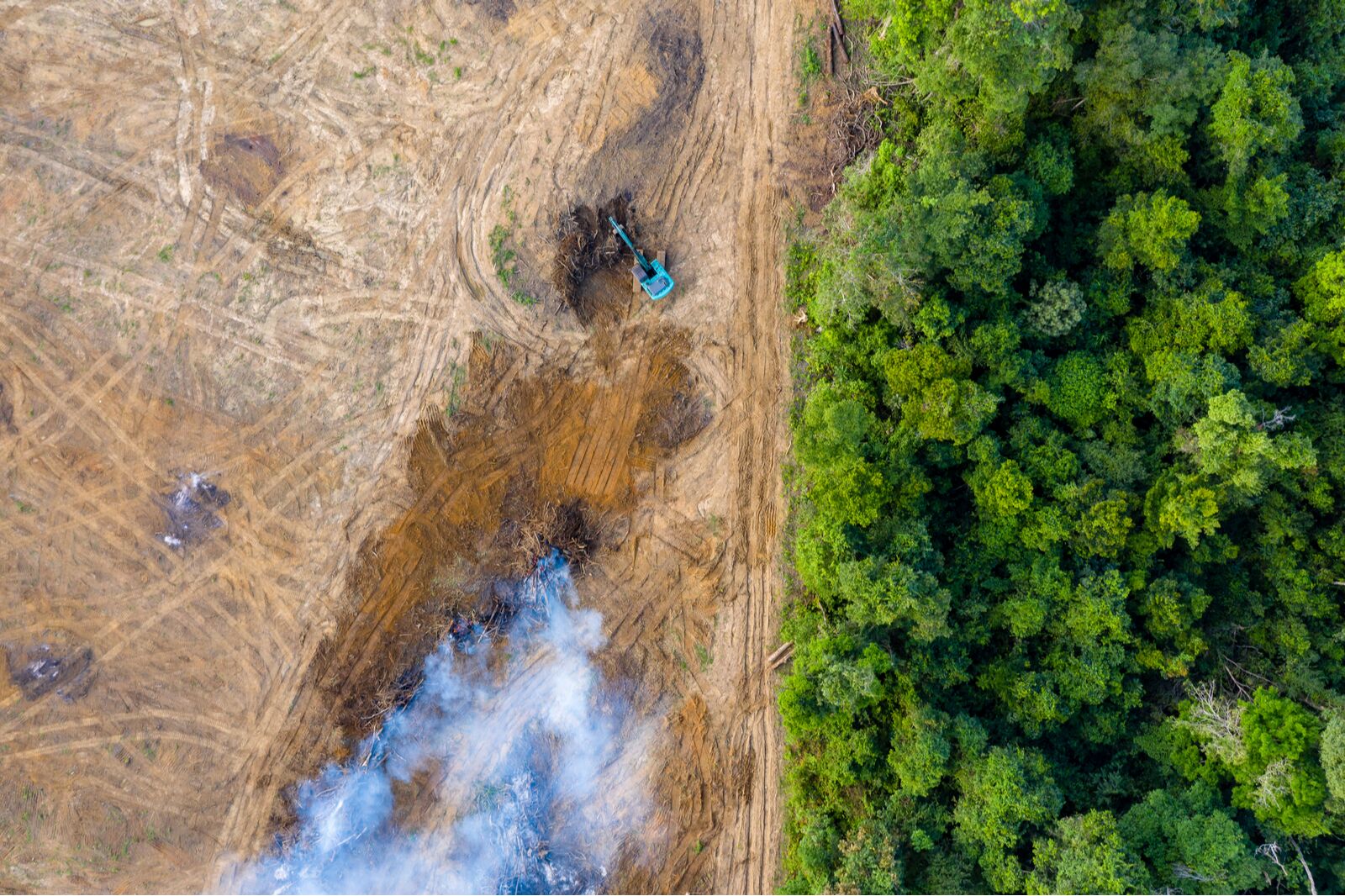 EJAtlas is a project out of the Environmental Science and Technology department at the Autonomous University of Barcelona. Its goal is to map and track socio-environmental conflicts, a form of environmental injustice.

The website explains that best: “Across the world, communities are struggling to defend their land, air, water, forests, and their livelihoods from damaging projects and extractive activities with heavy environmental and social impacts.” Many of the mapped conflicts are around “biodiversity conservation conflicts,” and there’s a specific category for tourism-related issues. So far, the map shows 129 conflicts within tourism facilities (like beach clubs and ski resorts), plus 90 airport-related injustices.

Volunteers are asked to register in the Atlas and document new cases they come across while traveling. Just try to connect with the local affected community before you proceed with any reporting on their behalf. And as the atlas notes on the homepage, when looking at the world map, “please note that the absence of data does not indicate the absence of conflict.” 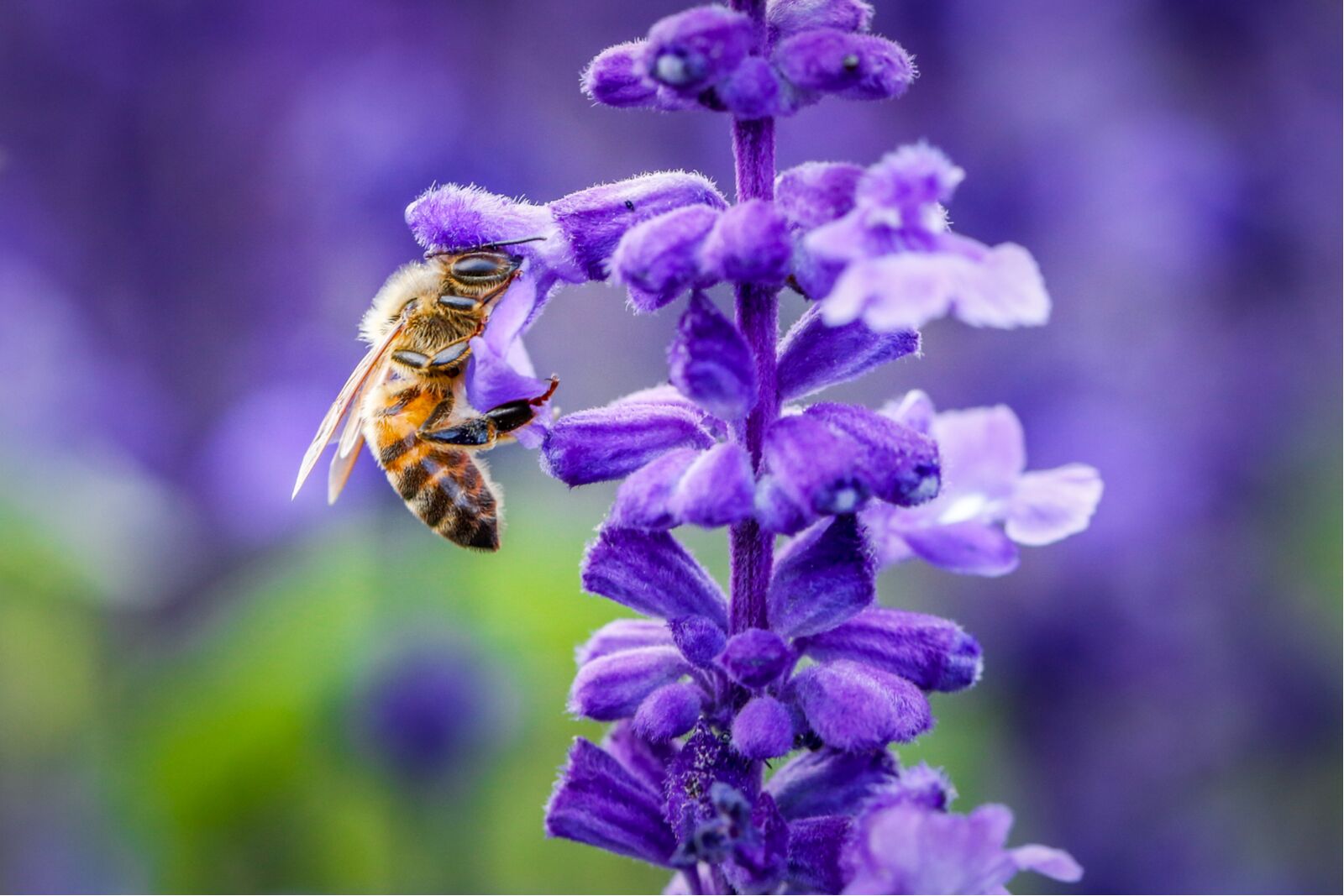 If you’re staying longer than just a few days in one location, you may want to look for local citizen science projects seeking assistance. You can use portals such as iNaturalist or SciStarter to find these projects, or ask tour operators and locals if they know of any projects in the area.

They could be ongoing projects or tied to specific dates. For example, in California in mid-June, you can participate in the annual Snapshot Cal Coast project. It’s an intensive weekend project where volunteers report observations and conditions along the coast, and the data contributes to answering specific research questions about California Marine Protected Areas. More than 19,000 observers have participated since 2016.

If you’re more interested in plant life, there’s an ongoing citizen-science project focused on pollinators in the US: the Great Sunflower Project. Participation is fairly simple – all you need to do is choose a single plant and watch it for five minutes, record all pollinators (like bees or butterflies) that visit, and report your findings online. It’s a year-round project and ideal for younger kids as they can help from their own backyards. I’ve done pollinators’ surveys and they’re a pretty zen-like practice. You’ll start noticing small, beautiful things happening in a single plant that you never noticed before.

Wildlife5 Wildlife Tourism Experiences Where Travelers Can Make a Genuine Difference
Tagged
Outdoor Sustainability Wildlife
What did you think of this story?
Meh
Good
Awesome