Most people know what animal migrations are — incredible phenomena when animals shift habitats based on weather and seasons in huge groups. But how many people can say they’ve witnessed one? With millions of animals migrating seasonally in search of food, better climates, and mating opportunities, the chance to experience the natural wonder of migrations might be closer than you think – and it’s not just whales and other well-known species migrating through tropical locations, either. A fascinating migration happens to be smack-dab in the middle of America. In fact, the migration is North America’s largest and occurs in one place only: Nebraska. 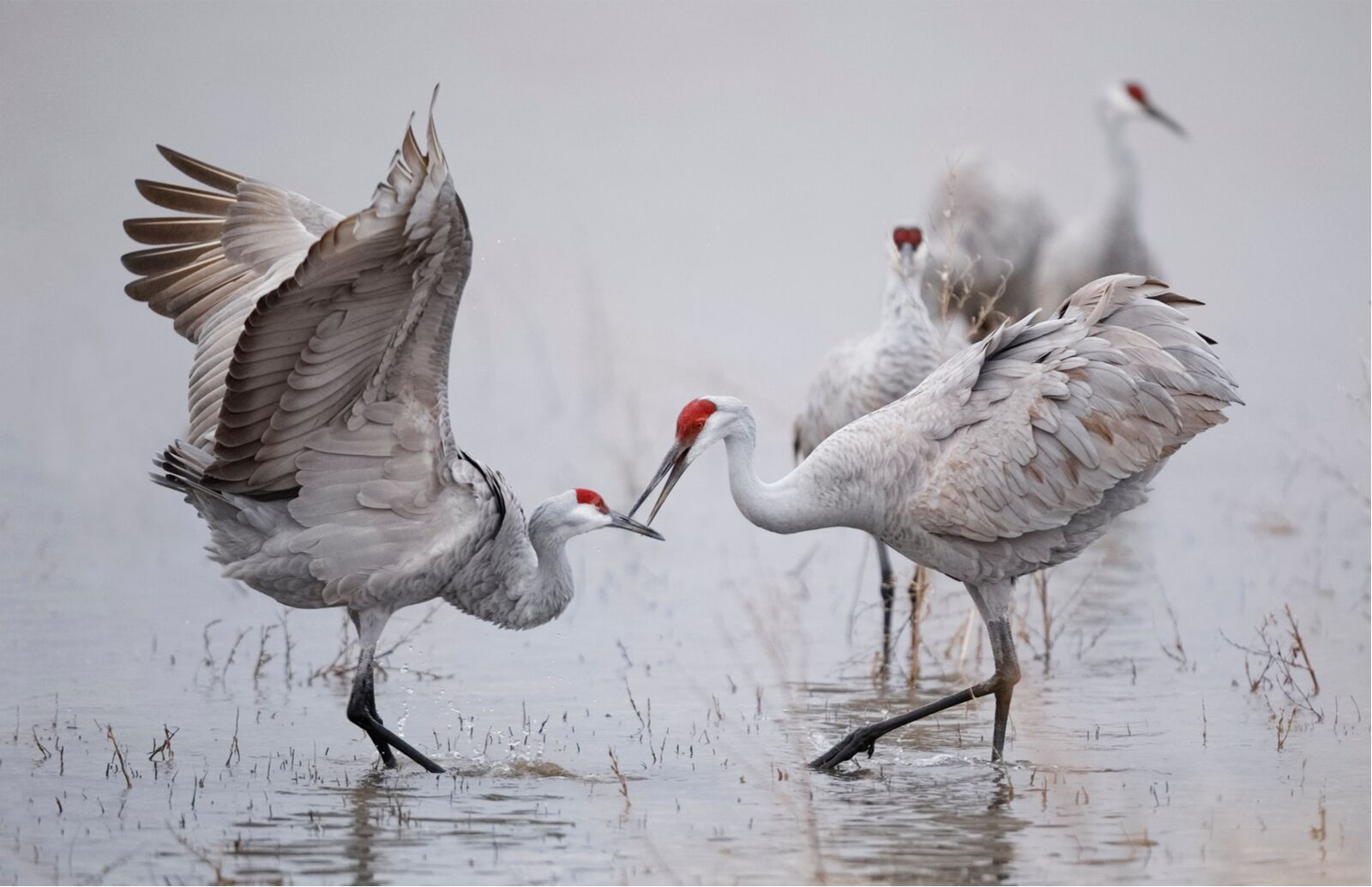 The sandhill cranes in Nebraska are the stars of one of the last great migrations on Earth and one of the largest in North America. According to David Baasch, wildlife biologist and threatened and endangered species specialist at The Crane Trust, roughly one million cranes stop in or around the Platte Valley during their migration. That’s around 80 percent of the world’s sandhill crane population, which makes it one of the largest animal migrations in the world by percentage of population, at least among species with vertebrae.

The cranes stop along the Platte River Valley to rest and refuel from late February to early April. The cranes have been traveling the same migratory route for thousands of years, leaving their wintering grounds down south and heading north to their breeding grounds. That’s almost as large as the famous wildebeest migration in Tanzania and Kenya each year.

Sandhill cranes are medium-sized birds that can get up to four feet tall with a wingspan of six feet. Stunningly, they can travel up to 450 miles per day at speeds of 38 mph. They’re monogamous and lay just one or two eggs a year. With a lifespan of 25 years, it is not uncommon to see generational flocks migrating together year after year. 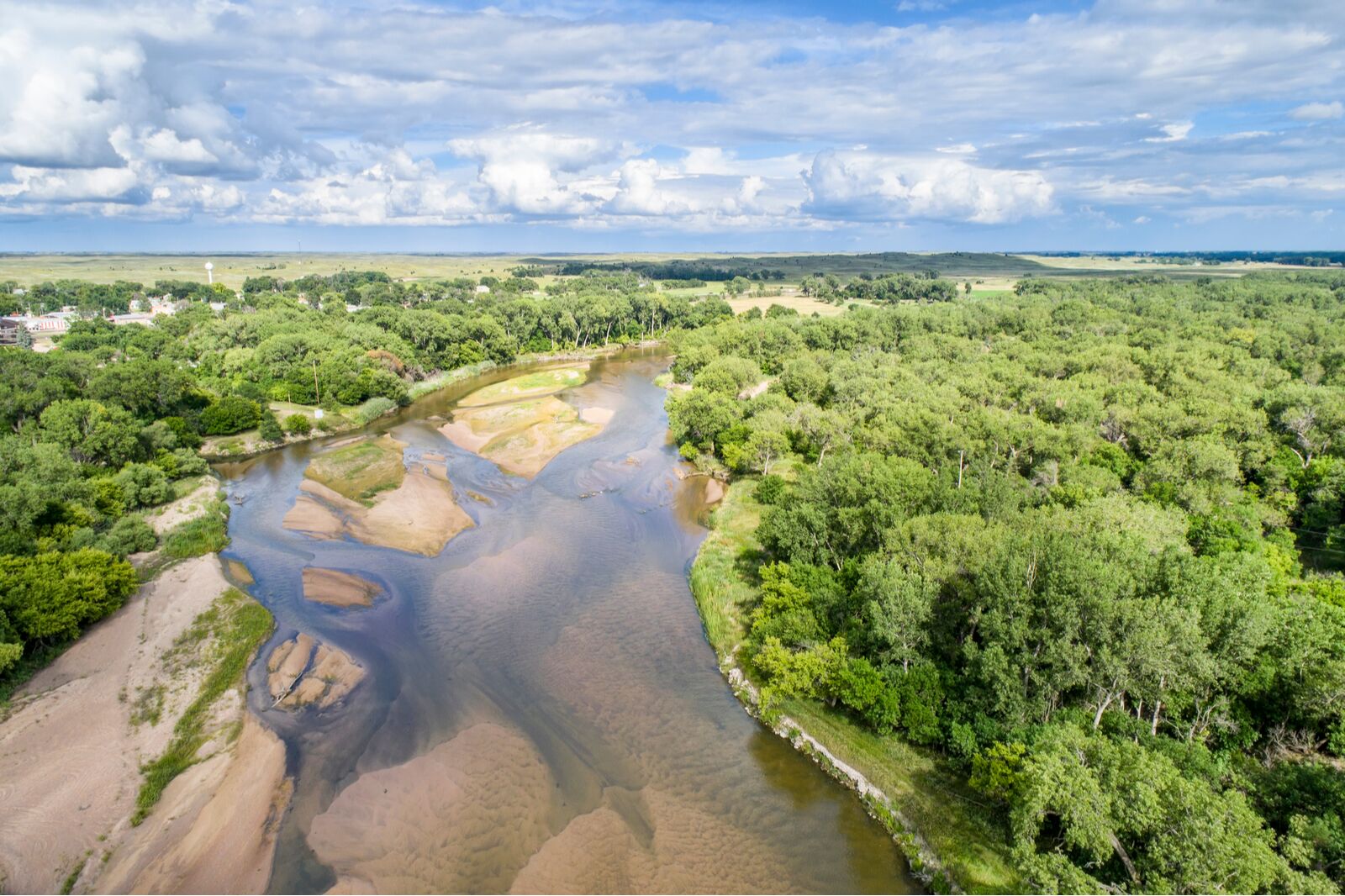 Rural Nebraska’s Platte River has served as a migratory route across the continent for humans and animals alike for millennia, and the 80-mile stretch of the Platte River Valley is the last area of the Great Plains that meets the sandhill crane’s needs. The shallow channels create safe roosting sites while the nearby farms and wetlands provide ample food. The opportunistic birds gain approximately 15 percent of their body weight while in Nebraska.

Reaching the sandhill cranes in Nebraska

The easiest way to reach Nebraska is to fly into Grand Island or Lincoln. You’ll then want to rent a car to explore a few different cities and move at your own pace as you watch and photograph the cranes. That said, the Sandhill cranes in Nebraska aren’t hard to find. You’ll see large groups in cornfields on the sides of the highways, and there are many public access areas for crane viewing you can visit at your leisure. 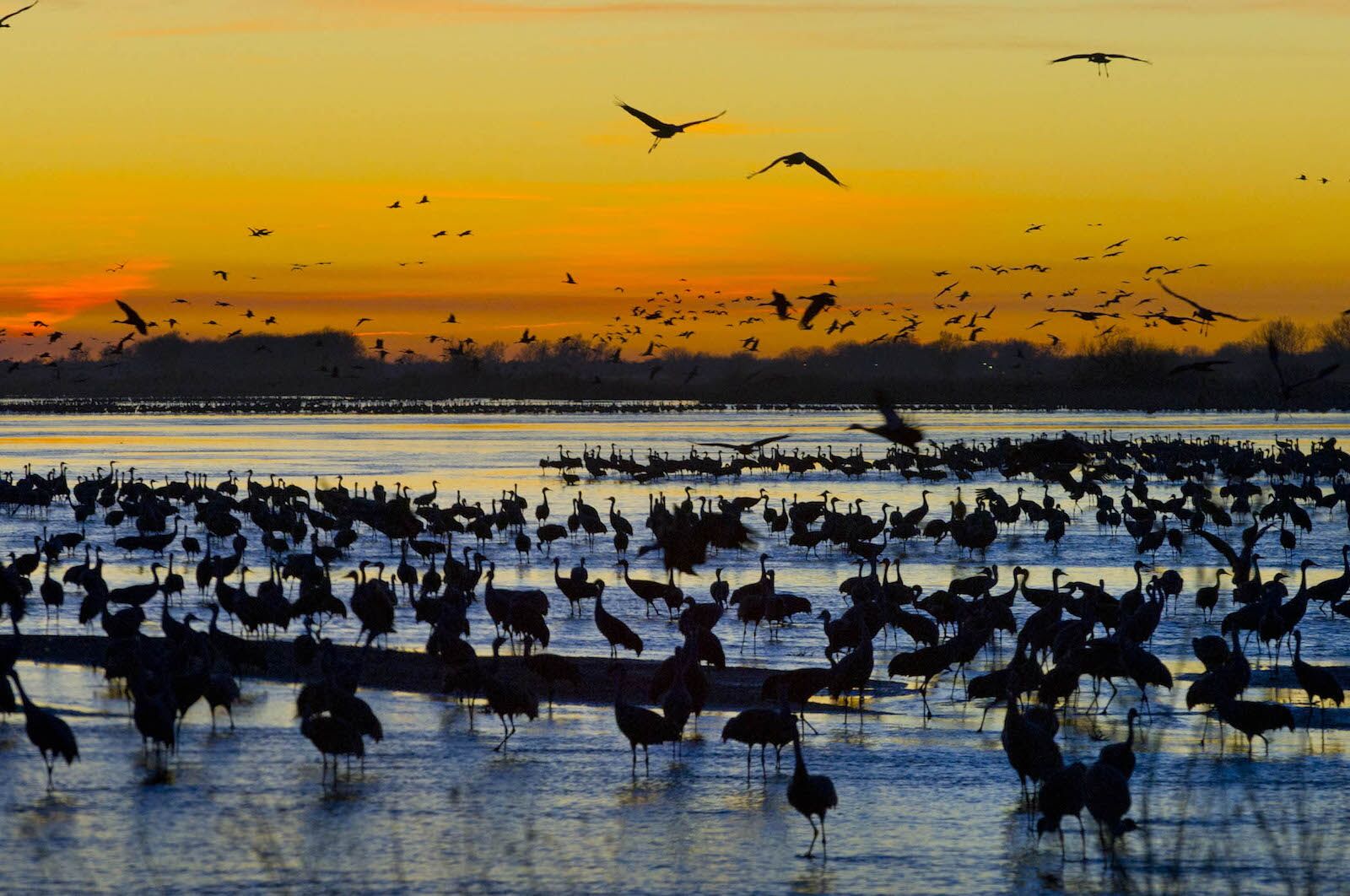 There are several ways to witness the crane migration, and you’ll be surprised at how easy it is for travelers of all ages to snag front-row seats. While it’s fun to road trip around the area on your own, you’ll gain insight from biologists and avian experts if you go with a guided tour. It can be fun to sign up for a sunrise or sunset tour or full-day field tour if you have the time.

Luxury travelers may like traveling with the Crane Trust, a non-profit that runs photography camps and all-inclusive overnight tours, which include lodging, meals, and two 90-minute crane viewings at sunset and sunrise. They have heated viewing blinds, perfect for sunrise photography when you can see the cranes waking up. They’re noisy, and it sounds beautiful. By the time the sun is up, most cranes have flown off in flocks of thousands to their daytime hangout in the harvested cornfields. It’s a truly magical experience. There’s also a bison heard on the property, which is worth visiting.

Another good viewing area for the sandhill cranes in Nebraska is the Iain Nicolson Audubon Center at Rowe Sanctuary, located in Kearney, a medium-sized town known as the “sandhill crane capita of the world.” The sanctuary offers guided trips during the Sandhill Crane migratory months, which includes an educational presentation and a 90-minute viewing in a heated blind (great for those chilly nights and early mornings). As the sandhill cranes come in from the fields at sunset, you’ll have the chance to see how they line up in family groups on the water before settling down for the night. Since they roost along the river, sunset and sunrise viewings provide the best opportunities for photographing them in large groups.

Check out Dusty Trails Outdoor Specialists in North Platte, Nebraska if you’re more adventurous. Dusty offers a sandhill crane bus tour that gives viewers the chance to observe the cranes in the cornfields as they feed and practice their dancing skills. 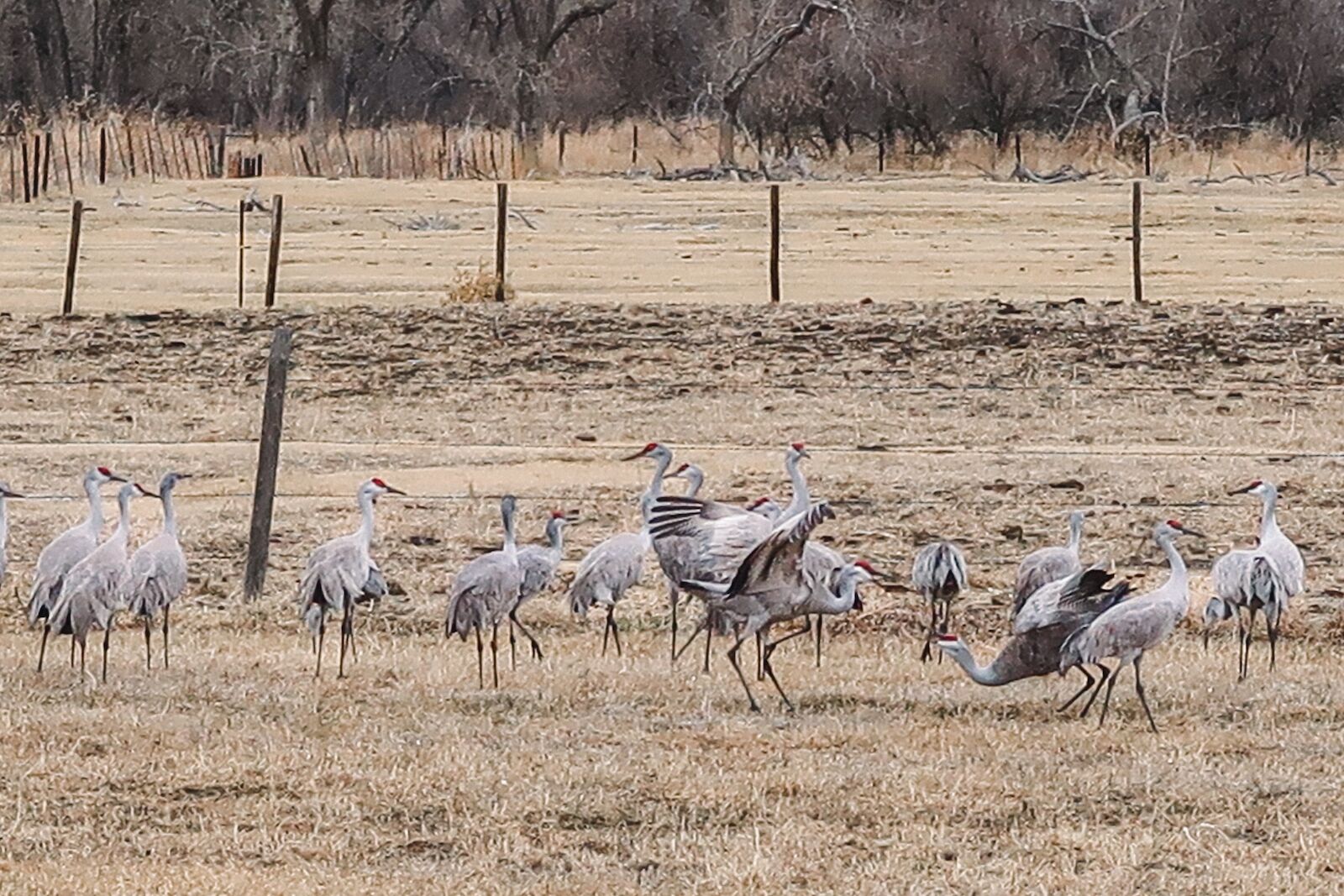 Sandhill cranes bow to each other, flap their wings, and jump as a way of communicating, courting, and mating. Pairs that mate for life often dance together to strengthen their bond.

The tours are on a school bus, and Dusty is full of educational and fun facts about life in the Midwest. If you’re lucky, Anne (his Australian cattle dog) will come along for the ride.

WildlifeThe Most Spectacular Animal Migrations Around the World and Where To See Them
Tagged
Outdoor Wildlife Nebraska, United States
What did you think of this story?
Meh
Good
Awesome