London is a famously multicultural city, shaped by the immigrant communities that have built their lives there. Much like the city itself, black-owned restaurants here span the width of the African diaspora. From the kitchens of the American South to Addis Ababa, these black-owned eateries transcend borders and passport stamps. Basically, you don’t need to leave the Big Smoke for an authentic yet diverse taste of African culture and identity.

Besides well-seasoned plates, this round-up will take you to some of the most interesting neighborhoods in the city. In east London, try out some hot chocolate or chicken and waffles in one of London’s top art districts. Head south of the river for a taste of the Caribbean in two of London’s historically black boroughs, Brixton and Peckham. Here are the best black-owned restaurants in London.

Located in Peckham, South London’s predominately Nigerian district, Prince of Peckham is a go-to pub in the neighborhood. Founded by Clement Ogbonnaya, who grew up in the neighborhood, this spot serves up Caribbean inspired plates from its in-house pop-up restaurant, White Men Can’t Jerk. If you’re craving jerk, like I always am, reach for the chicken brioche bun with coleslaw. It’s simple yet done well. Or keep things classic with an order of the wing tings, chicken dipped in buttermilk and dunked in a honey chili glaze. Enough said. In line with its Caribbean roots, every Saturday the pub throws a wall-to-wall, sweat-dripping party called Culture. The DJs always spin the classic hip hop, R&B, and Afrobeat tunes. It promises a good time and usually gets packed, so it’s essential to get on the guestlist before turning up. 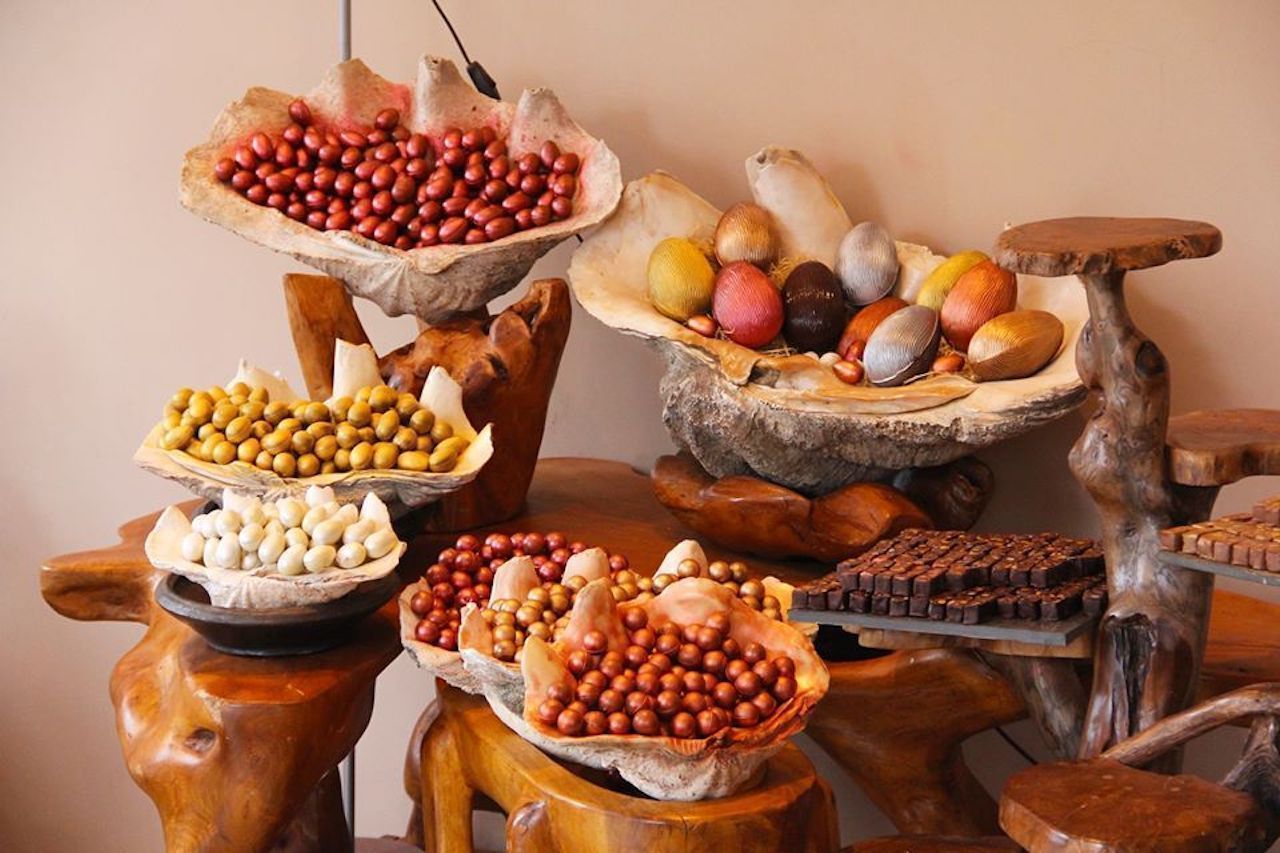 Dark Sugars is not quite a restaurant but is definitely a black-owned spot you shouldn’t miss in London. The cocoa house sells decadent chocolate of all kinds. From shaved hot chocolate to edible pearls, the shop boasts a deep knowledge of chocolate-making. Fatou Nyanga, owner of Dark Sugars, started by selling her chocolate truffles at Borough Market. Soon after, she traveled to Ghana to learn more about the ins and outs of making chocolate. Her hot chocolate topped with freshly shaved morsels is hailed as one of the best in the city. 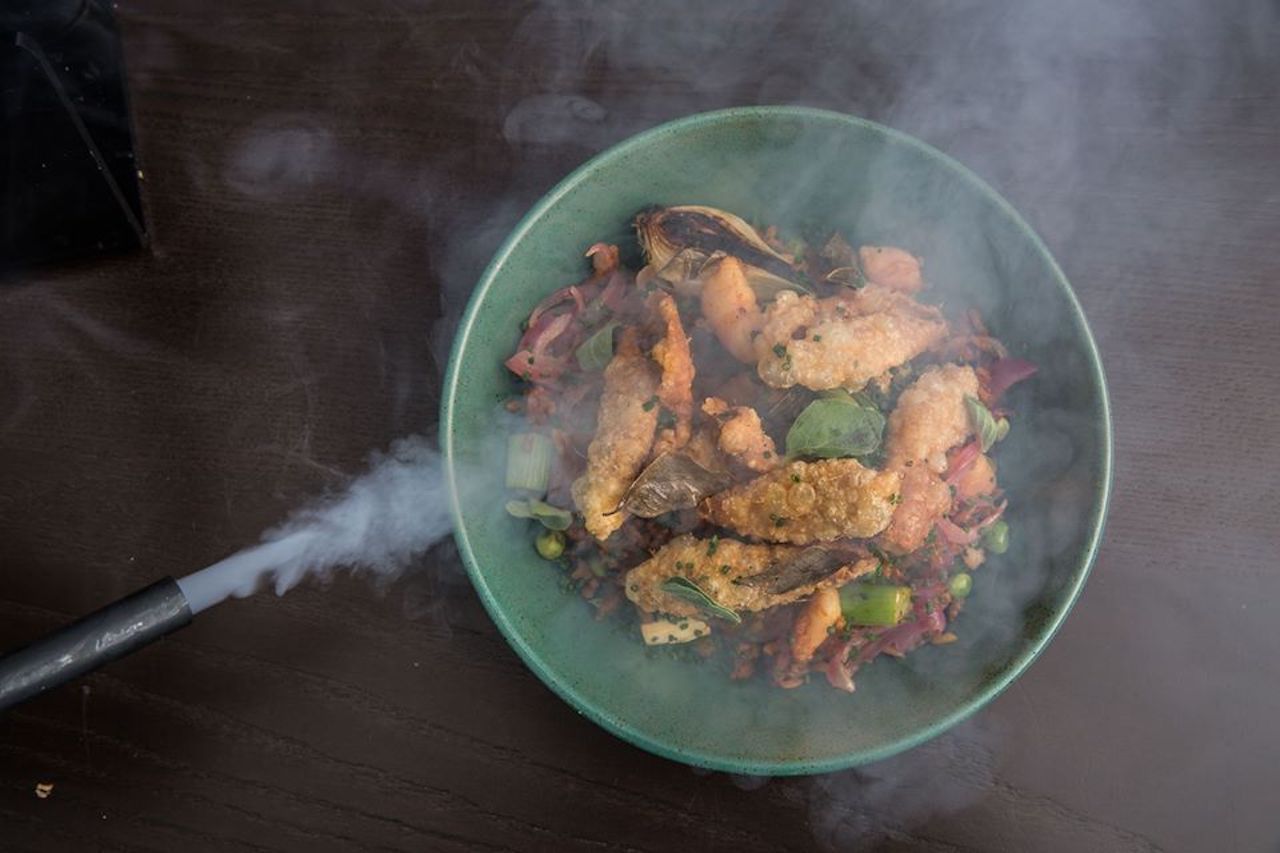 Named after the neighborhood where co-founder Iré Hassan-Odukale grew up in Lagos, Ikoyi is a taste of West Africa in South London. Chef Jeremy Chan (Hassan-Odukale’s business partner) harnesses the true essence of Nigerian ingredients and has spent years perfecting the dishes that make up the foundation of the menu. Plantains, scotch bonnet chilies, and smoky peppercorns are just some of the flavors profiles you can expect here. Ikoyi’s chic interiors feature cozy wooden decorations and a lot of greenery. On the tasting menu, some of the standout dishes include smoked crab, Jollof rice, and a fermented plantain waffle. 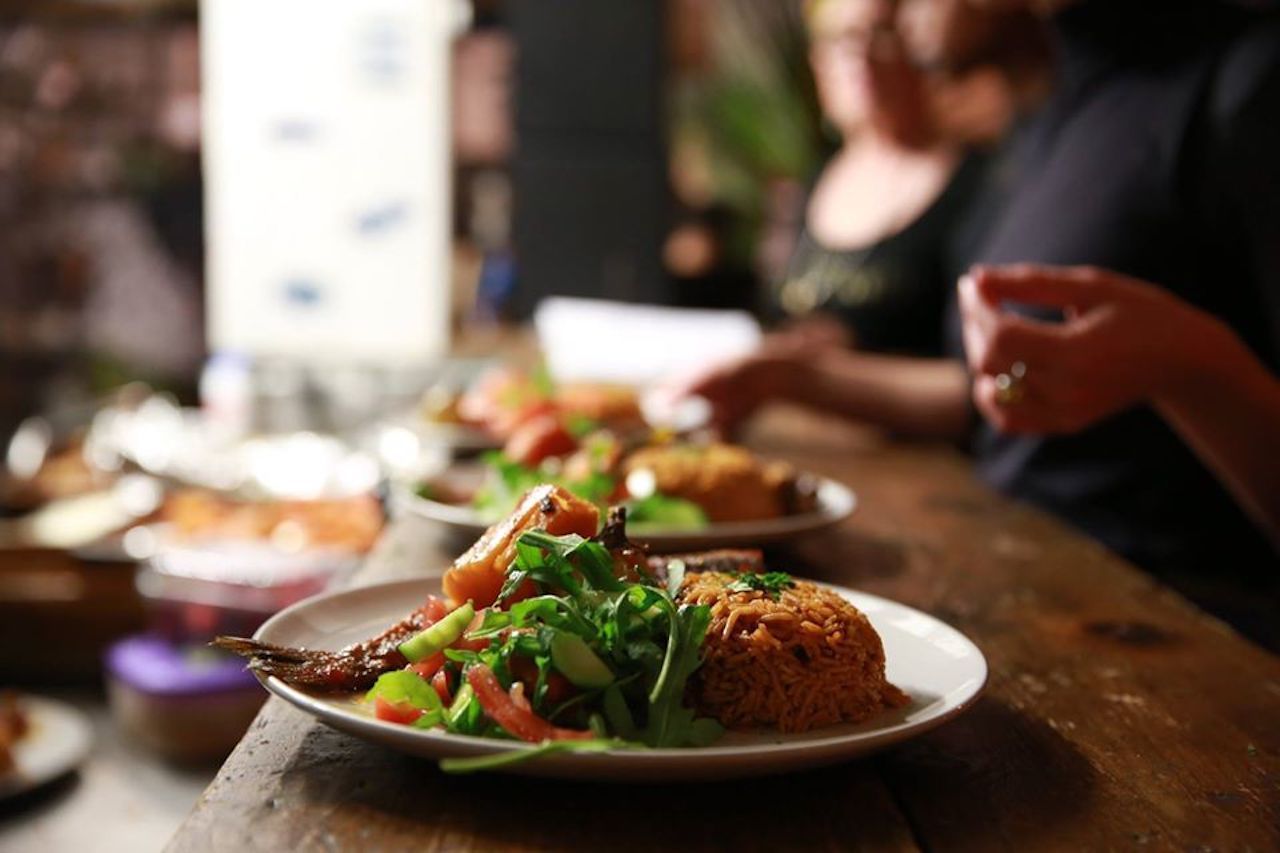 This Senegalese pop-up restaurant also brings West African flavors to London. Founder and head chef Khadim Mbamba realized that the city lacked a Senegalese restaurant, so he started this monthly pop-up dinner series to bring the food and music of his home to London. Little Baobab’s chefs use fresh ingredients to recreate the home-cooked meals of their childhoods in Senegal.

Must-try dishes include Chicken Yassa (chicken served with caramelized onions and rice) and Thiebou Dienne, Senegal’s national dish of sea bass with jollof rice. For a sip of Senegal, don’t leave Little Baobab without tasting fresh bissap, or hibiscus juice. While the food is stellar, the highlight of dinner at Little Baobab might be the live musical performances from emerging African artists. At only 35 British pounds per person for a three-course meal with live music performances, there’s no reason Little Baobab shouldn’t be on your list.

Where: Varies each month 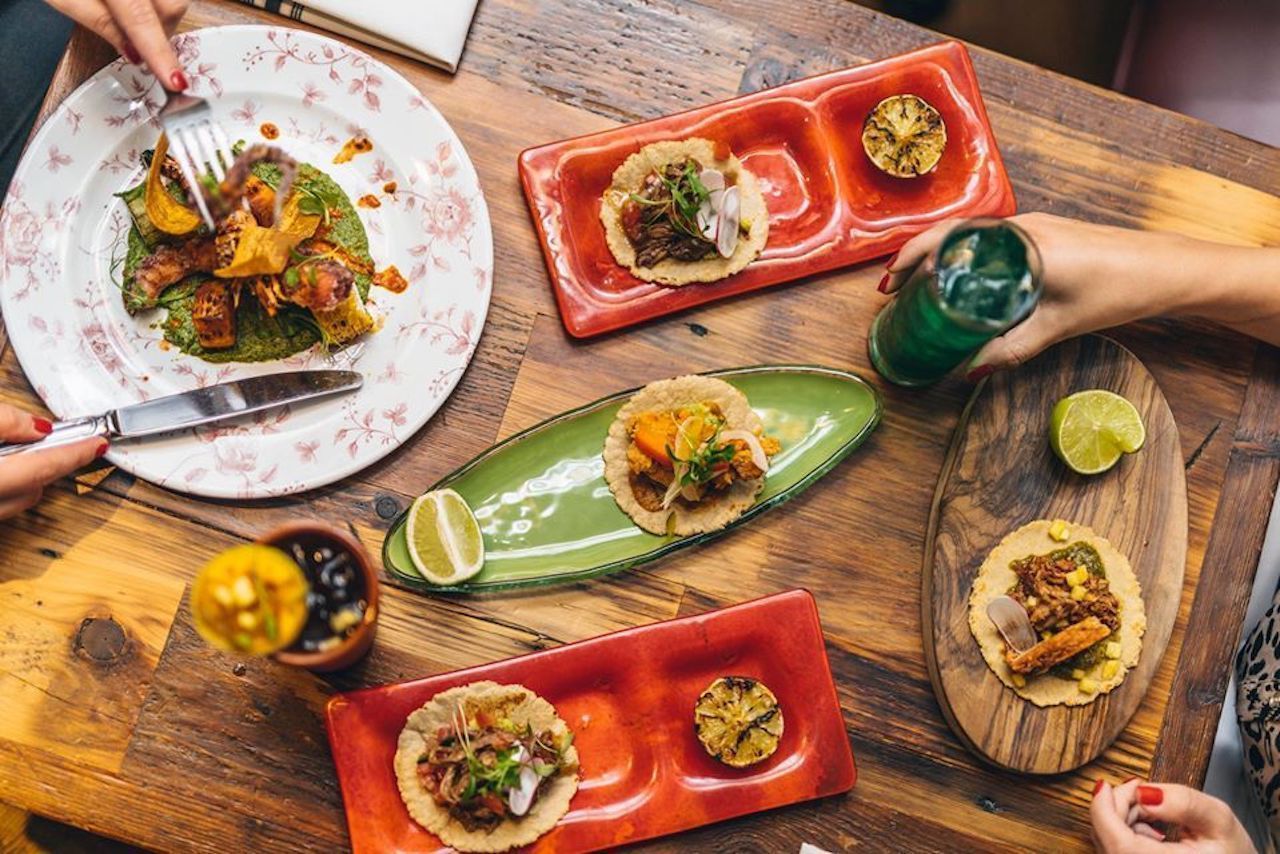 Harlem collides with Shoreditch at this East London hotspot. Critically acclaimed chef and restaurateur Marcus Samuelsson opened the London outpost of his popular New York City restaurant in 2017. Red Rooster’s menu is heavy on American soul food with a touch of East African influence. Dishes like chicken and waffles and shrimp and grits are staples here. If you feel like breaking the mold, try the Obama short ribs served with ricotta gnocchi or Timballo D’Antonia, an Ethiopian chicken stew. Staying true to its African-American roots, Red Rooster hosts a weekly gospel brunch on Sundays. Come for the classic brunch and stay for the live gospel choir — they’ve been known to tear down the house. 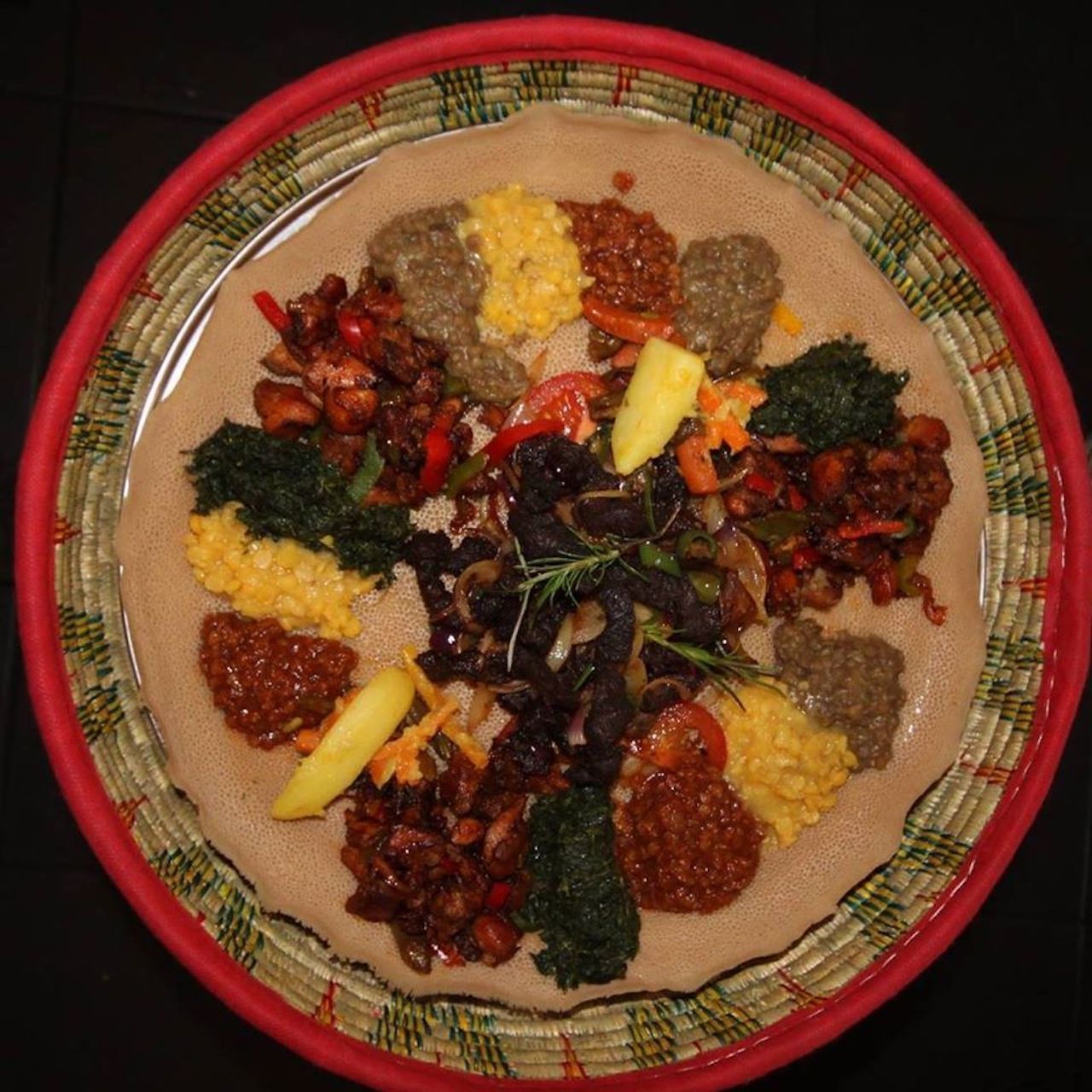 While there are many Ethiopian restaurants in London, Zeret Kitchen has been serving up beloved Ethiopian food since 2004. Tafeswork Belayneh & Berhanu Tesfaye run the buzzy Camberwell-based restaurant. Long communal tables make this airy space the perfect place for breaking bread with groups of friends or family.

Regarded as one of the best spots for Ethiopian food in London, Zeret Kitchen prides itself on using quality ingredients sourced directly from Ethiopia and local markets. If you are feeling adventurous, order the Zeret Surprise for a cornucopia of veggies, stews, lentils and, of course, injera.

Located inside of the historic Brixton Village Market, Eat Of Eden has a cult following for its vegan soul food. Inspired by the flavors of the Caribbean, this restaurant sources organic ingredients for veggie- and grain-based plates. I’ve come here with friends who are vegan and friends who are carnivores, but everyone loves it. From the herby chickpea curry to creamy macaroni pie, Eat of Eden puts an arguably better meat-free twist on all of your favorite dishes. If you’re coming with friends, order the tasting platter, which features six to eight different dishes. In true Caribbean fashion, be prepared to wait when you get here as the shop itself is quite small, and it’s usually always busy. It’ll be worth every second.