Soft shell crab season has been effectively, if not officially, canceled. And in South Carolina Lowcountry, that’s basically like canceling Christmas.

In the fallout from COVID-19, the usually-bustling restaurants of Charleston, Beaufort, and the rest of the region are missing out on a season when diners typically flock in for the salty-sweet goodness of soft shell blue crabs.

“It’s the most important day in the calendar,” says Hanna Raskin, food editor and chief critic at the Post and Courier in Charleston. There’s not a hint of hyperbole in her voice. “Soft shell season, everyone goes haywire around that. I don’t think people realize how important it is.”

In early April, the Lowcountry’s famous blue crabs molt their exoskeletons and are, for a brief moment, soft enough to eat whole. The season can last for as long as a few weeks, or last only a couple of days. It comes but once a year, and this year the timing was particularly bad.

“Soft shell season started like the day after the governor mandated we close our dining rooms,” says Brandon Carter, the chef and owner of Farm Bluffton. “That was a real bummer for a lot of people around there. It’s something they wait all year for, and we are completely at the mercy of Mother Nature in terms of soft shells.”

With soft shell season all but gone for 2020, Carter, like many restaurateurs, is trying to keep the spirit — as well as his restaurant and local fishermen’s livelihoods — going despite the unusual conditions.

His comment speaks to the overall importance of blue crab in this part of the country: It’s both comfort food and economic driver, part of not just the food culture but also the culture of social gatherings and family picnics. They are childhood memories and long summer afternoons on the water. And perhaps more than any other food in the Lowcountry, blue crabs just taste like home.

Blue crab’s roots here begin with the Gullah-Geechee people, enslaved West Africans who worked the rice and cotton plantations along the Carolina coast. When plantation owners fled the mosquitoes and oppressive humidity during the summer, the Gullah-Geechee were left nearly alone on the islands. They lived mostly off what they could find. And during summer, that meant blue crabs.

“It was one of the free accessible foods, especially when people had the opportunity to get what they could out of creeks. And blue crabs were abundant,” says BJ Dennis, a personal chef and caterer in Charleston who specializes in foods of the African diaspora. “Eating crab was a big thing in West Africa also, so it went hand in hand.”

The Gullah-Geechee created blue crab dishes like the ubiquitous blue crab rice, which in its simplest form is crabmeat, rice, and vegetables. They also developed blue crab gravy, blue crab and okra stew, blue crab gumbo, and scores of other foods you find on Lowcountry menus today. 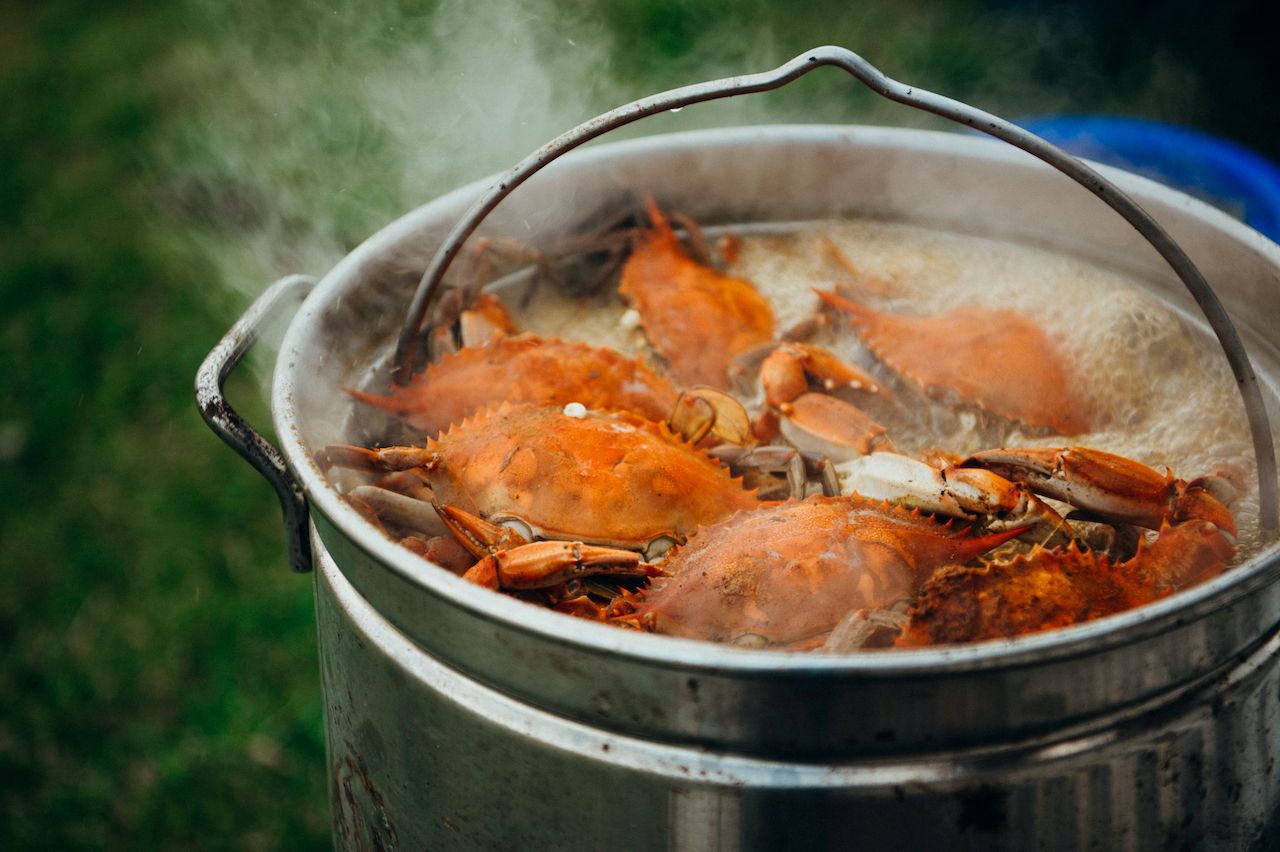 Over the years, blue crab spread from the islands to kitchens and picnic tables around the region, garnering massive popularity along the way.

“It’s really a story of working with what you got,” Carter says. “There’s an abundance of blue crab in the area, so it’s been a sustainable and renewable resource in the Lowcountry for a long time.”

Because it was so accessible, it became a key ingredient in local social gatherings.

“People at home in their backyard, they throw down with a low country boil,” says Craig Reaves, a commercial fisherman whose family runs Sea Eagle Market in Beaufort. “That’s shrimp, potatoes, corn, and sausage. You add blue crabs to that, and you have a big pot, call it frogmore stew. Pour it out on your picnic tables in your backyard, it’s part of the social fabric.”

Catching blue crabs is also part of the experience one has growing up in the Lowcountry, like going to “the shore” if you grew up in the Northeast, or finding swimming holes in the Midwest.

“My kids who have grown up most of their lives here, catching blue crab with a chicken wing or chicken neck is just something you do,” Carter says.

An economic staple goes into decline 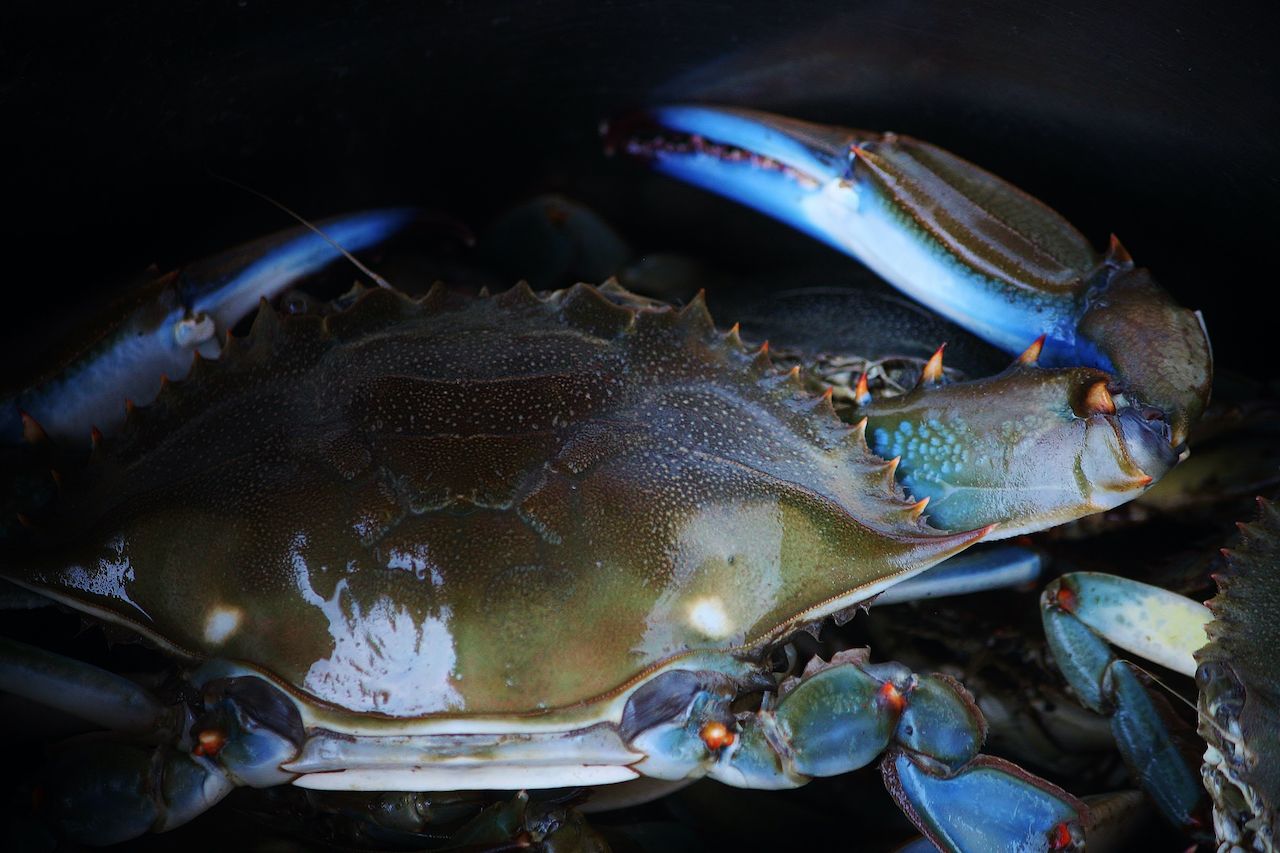 During the second half of the 20th century, blue crab became a major part of the local fishing economy, too. Families like Reaves’ dominated the blue crab trade, which peaked in the late 1970s. But a combination of over fishing and international competition has led to a steady decline since 2000.

Today, according to the National Oceanic and Atmospheric Administration, more than 80 percent of seafood consumed in the US is imported. The labor involved with catching and picking blue crab is significant and expensive; sourcing it from countries with cheap labor makes for a cheaper product.

Reaves says most of the blue crab you find in restaurants comes from Southeast Asia and South and Central America, so the reduced supply of local crab has led to an increased demand.

“It has a smaller role than it used to,” he says. “But those of us who’ve weathered the storm have done well.”

Because Lowcountry blue crab is now in far shorter supply, the handful of people who still catch it can demand high prices. Carter says he can normally buy jumbo lump meat along the Gulf Coast for about $24 a pound. The jumbo lump he purchases from the Bluffton Oyster Company can be upward of $38 a pound.

It’s also expensive because crab picking isn’t a job many people want to do anymore. In the picking house at Bluffton Oyster, rows upon rows of women sit picking blue crabs at concrete tables, a trade they have mastered for decades. They also all look like they could have retired 20 years ago.

“The youngest one is like 70,” Carter says. “What that says to me is this is something younger generations are not interested in. It’s hard, backbreaking work, and Bluffton Oyster is the only place I’ve heard of that harvest, cooks, and picks crab in the Lowcountry.” 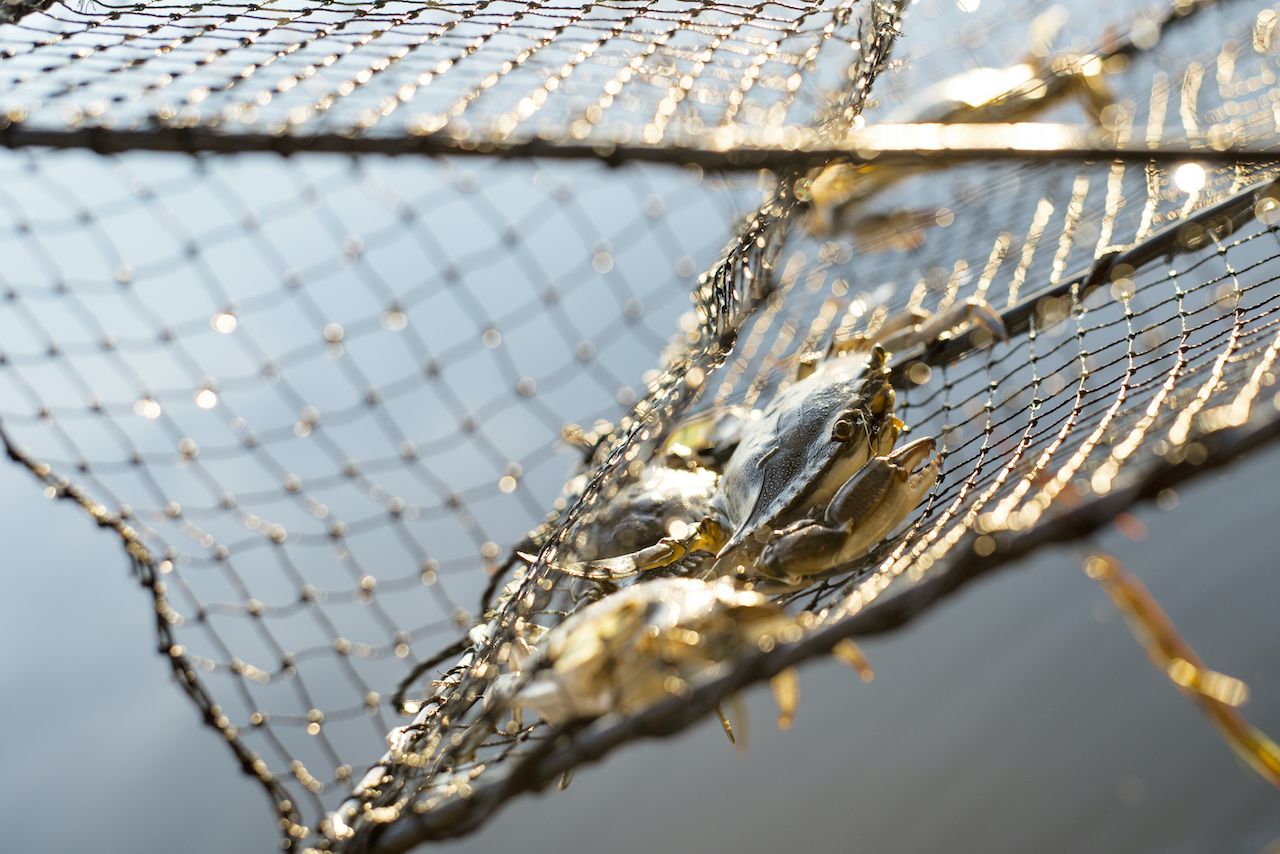 Though the industry surrounding blue crab may be diminishing, its flavor is still robust. The taste of blue crab is endemic to the region, and while it may not be the sweetest or richest crabmeat on the market, it tastes like South Carolina.

“I knew it was something special from the first time I tasted it,” Carter says. “It’s fresher, sweeter, cleaner, than any other crab I’d had. You get a better flavor of the water, of the ocean. It tastes like the water smells, it has a merroir to it. Not as sweet as Dungeness or snow crab, but it tastes right for where we are.”

One of the South’s most revered food critics agrees.

“I think it’s delicious,” says the Post and Courier’s Raksin. “Crab is the sweetest meat, it has a longstanding history here. It has a connection to the sea, a connection to our soul.”

Chefs use this flavor in a number of different ways. There is the traditional frogmore stew, which Denis says is fairly popular among his private clients. Blue crab rice is the classic presentation, and probably the best way to try it if you haven’t had blue crab before.

But you can find interesting twists too. Dennis says he takes fat from the crabs and creates a blue crab butter, which he serves with his crab boils. Carter serves it with pepper paste and sofrito, then grills it on the plancha to give it a crunchy texture. “Like your grandmother’s blue crab rice,” he says.

Though it’s not hard to find on Lowcountry menus, you won’t find blue crab at white tablecloth restaurants or many of the chic eateries people travel to Charleston for.

“I don’t think it’s transitioned heavily into high end kitchens,” Dennis says. “It’s not looked upon as elegant, because you gotta get a little messy. But for the seafood shacks, the mom and pops, true local, it’s still a tradition to have your blue crab all year round.”

Raskin says she sends people to Nana’s Seafood & Soul, an unassuming wood house that, according to the critic, is “the only place downtown that does a decent garlic crab.”

Of course, for now, no restaurants are doing much of anything in downtown Charleston, and this year’s soft shell season won’t be the boon it usually is. But the warm waters of July through September are not far off, and with those come the biggest blue crab hauls of the year. And though diners may have to get a little dirty to enjoy it, the timing of peak blue crab season, unlike that of soft shell crab, should be perfect.

Myrtle Beach: Even in Winter, There's No Better Place To Be