You’ve heard of shrimp and grits. Beans and rice. Corn fritters. These dishes are inarguably tied the cultural identity of the lower Atlantic coastline, from South Carolina down to northern Florida, a region that takes particular pride in the diversity and rich, complex flavors of its cuisine. Yet these dishes are rooted in a shameful chapter of American history: the West African slave trade. The descendants of the slave trade on the southern Atlantic coast are the Gullah-Geechee, who now call South Carolina’s Lowcountry, as well as parts of Georgia and Florida, home.

While the connection to the past for these dishes has long been ignored, chef Benjamin Dennis is leading a push to finally give these overlooked culinary innovators their due.

“Charleston city would not be what it is without Gullah culture,” Dennis tells me. “Gullah-Geechee cuisine is one of the original foods of the world.”

Okra, grains, and seafood are among the key ingredients of Gullah-Geechee cuisine. They’re used in staple dishes like okra soup, which resembles a New Orleans gumbo but is made with a tomato base instead of a roux, along with lima beans, bacon, shrimp, and garlic, among other ingredients. Soup bunch — leafy greens thrown together with root vegetables and sometimes smoked fish — is another South Carolina dish original to Gullah-Geechee cuisine. Alongside rice, cooked down mustard greens, collard greens, or turnip greens appear on almost every plate.

Gullah-Geechee food has influences from Europe, Native Americans, and Africa. Okra, watermelon, and peanuts, to name a few, arrived on America’s shores in the hands of enslaved West Africans. Rice only became a successful crop in the lowlands of the South because of the wetland farming system brought to South Carolina by West African people specifically enslaved because of their knowledge and proficiency as rice farmers.

Using these foundational ingredients, West African slaves and their descendants prepared meals in colonial homes, popularizing the resulting cuisine throughout the South. Likewise, they pioneered cooking techniques seen in today’s wood smoked barbecue and hearty stews like gumbo. West African slaves introduced spices like thyme, jasmine, and sassafrass to Southern food, and incorporated shrimp and oysters, as well paprika and garlic, into everyday meals. The Native Americans already living in the area, who had cultivated their own crops for thousands of years before the arrival of the colonists, played an important role too, introducing the Gullah Geechee to squash and corn.

“The cuisines of Black communities in the South has been flattened into what is now referred to as ‘soul food,’” Heather Hodges, executive director of the Gullah Geechee Cultural Heritage Corridor, says via email. “Unlike ‘soul food’ which relies heavily on techniques like battering and deep frying, Gullah-Geechee traditional cooking favors preparations like perlows — one pot, communal dishes. The preparations were and still are designed to showcase the freshness, seasonality, and versatility of the seafood, vegetables, and game available along the Lower Atlantic coastline.” 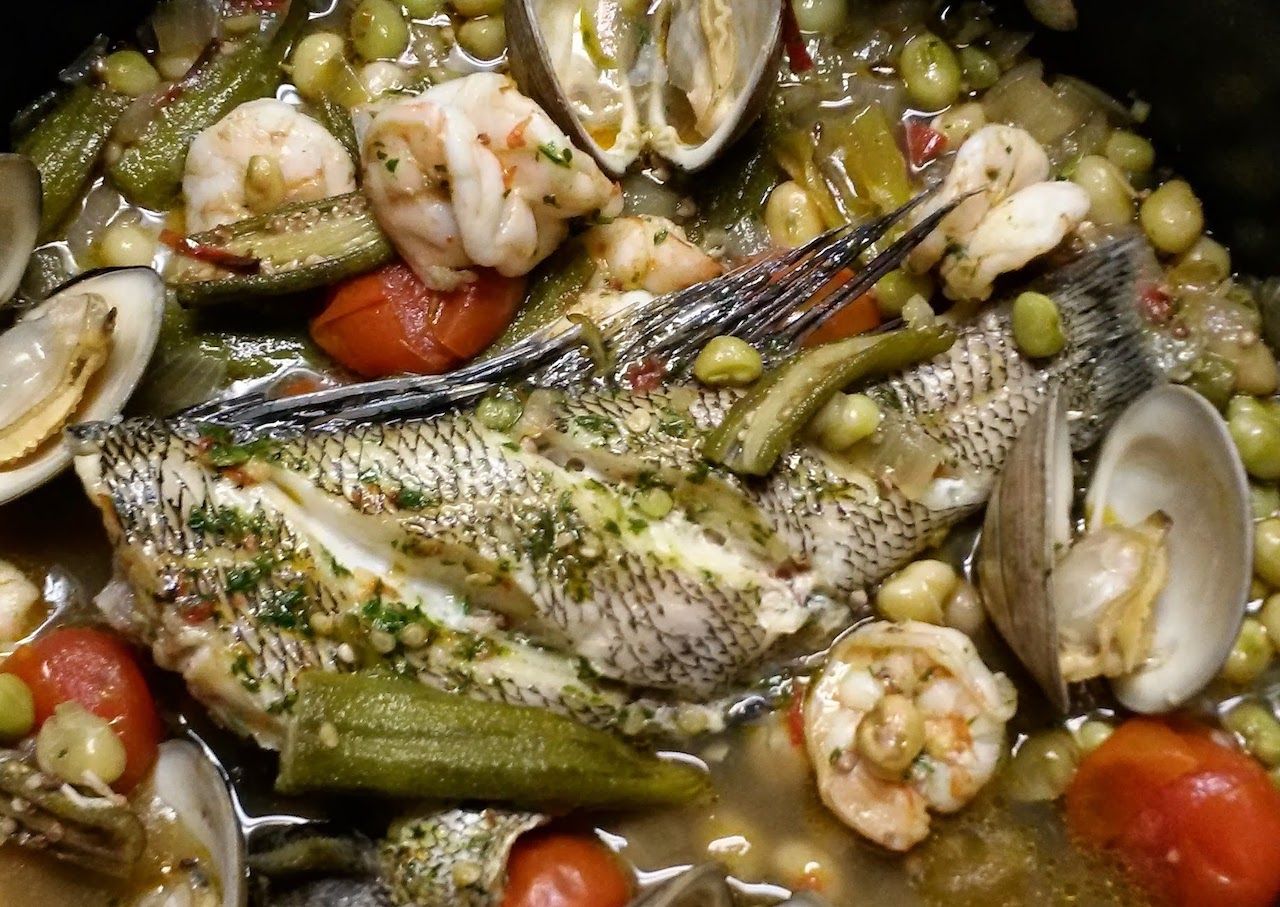 Today, Gullah-Geechee cuisine is prepared mostly by home cooks equipped with recipes passed down through many generations, though there are some restaurants in South Carolina that pay homage to its culinary traditions, including Hannibal’s Kitchen in Charleston, Buckshots in McClellanville, and MJ’s in St. Helena Island. Still, Gullah-Geechee cuisine mostly flies under the radar. The region’s most famous dishes, like shrimp and grits, are now considered Southern specialities. While the history of these dishes has received more attention of late thanks to regional chefs and Top Chef contestant Eric Adjepong, their West African roots are largely obscured by a history that would rather ignore the legacy of slavery than honor its descendants.

“Overtime, these foundational Gullah-Geechee culinary contributions became obscured and absorbed into what was marketed as ‘Lowcountry’ or Southern foodways, eliding over the definite and discernible Gullah-Geechee roots of much of what is prepared and sold under this heading,” Hodges writes. “Chefs like [Benjamin] Dennis, Sallie-Ann Robinson and Charlotte Jenkins play an important role in helping the Gullah-Geechee people to claim attribution and acknowledgement for the ways in which they shaped and defined Lowcountry and Southern foodways.”

In recent years, however, Dennis has noticed what he calls a “renaissance” in Gullah culture — one that he is undoubtedly helping lead. Interest in Gullah-Geechee cuisine grew with the help of social media platforms like Instagram, where people with Gullah ancestry and curious American history buffs alike could post about their language and food. Dennis, who had worked mostly as a caterer and private chef around South Carolina, saw an opportunity. 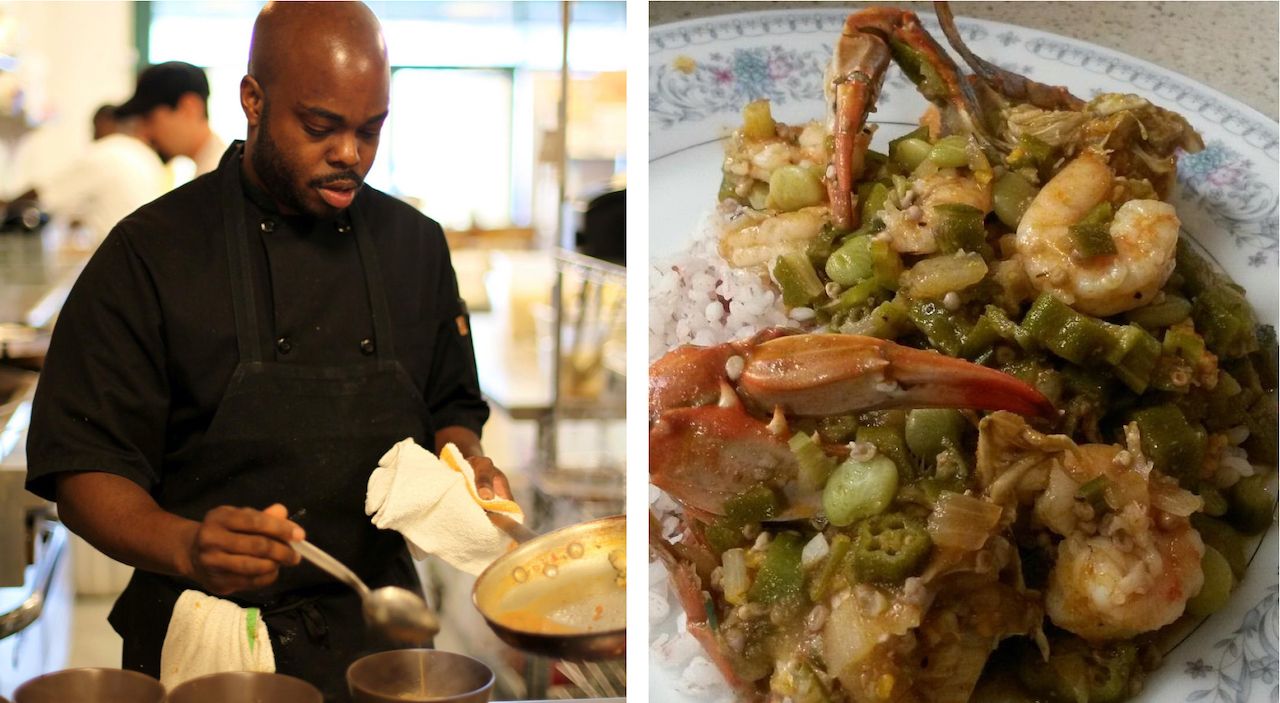 At the urging of a friend who worked in public relations, Dennis decided to team up with the French Quarter Inn to create a so-called immersive culinary experience for guests in 2018. On each trip, Dennis takes guests on an excursion to Gullah-Geechee farms on the outskirts of Charleston, including Jules Fields Family Farm, Fresh Future Farm, and Freeman Farms. They also visit the local docks, where they meet the fishermen who hunt for shrimp and other seafood.

“Gullah-Geechee culture plays a major part in Charleston’s history, yet there aren’t many opportunities for guests to truly experience it,” says Carlo Carroccia, the French Quarter Inn’s general manager. “This partnership is a way to connect our guests to the culture and spirit of Charleston so that they can understand it, learn from it, and appreciate it.”

At each stop, the group gathers fresh ingredients, including okra, peaches, peas, and grapes. Dennis and his team prepare a meal using what they gathered later that evening during a cooking demonstration at a private home in Charleston. Any guests who want a more hands-on experience can join in the cooking process.

Dennis also hopes that educating people, most of whom come from outside the Charleston area, about Gullah-Geechee culinary traditions helps preserve the Gullah-Geechee culture, ensuring its survival for future generations to learn about and enjoy. The Gullah Geechee are too important a part of Southern — and American — identity for their customs to be lost to time and indifference.

11 experiences you need to have in South Carolina

10 things about Greenville, SC that are pushing it to the next level

7 ways to experience the best of Greenville, SC

A 3,185-step walking itinerary around one of America’s prettiest cities: Greenville, SC

Why does everyone love Greenville, SC? I visited to find out.