Bordeaux is known as the Port of the Moon, thanks to its position in the curved nook of the Garonne River in southwest France. For centuries, the region’s growth has been shaped by the reputation of its wines, which have been shipped out from Bordeaux’s flourishing port since Roman times. But this UNESCO-listed city has more to offer than just quaffing — from gentle river cruises to tough climbs up Europe’s biggest sand dune. So put down your wine glass and strap on your boots. It’s time to explore Bordeaux’s stunning landscape from the water, sky, bike saddle, and sand.

Cruise, canoe, or paddleboard on the Garonne River 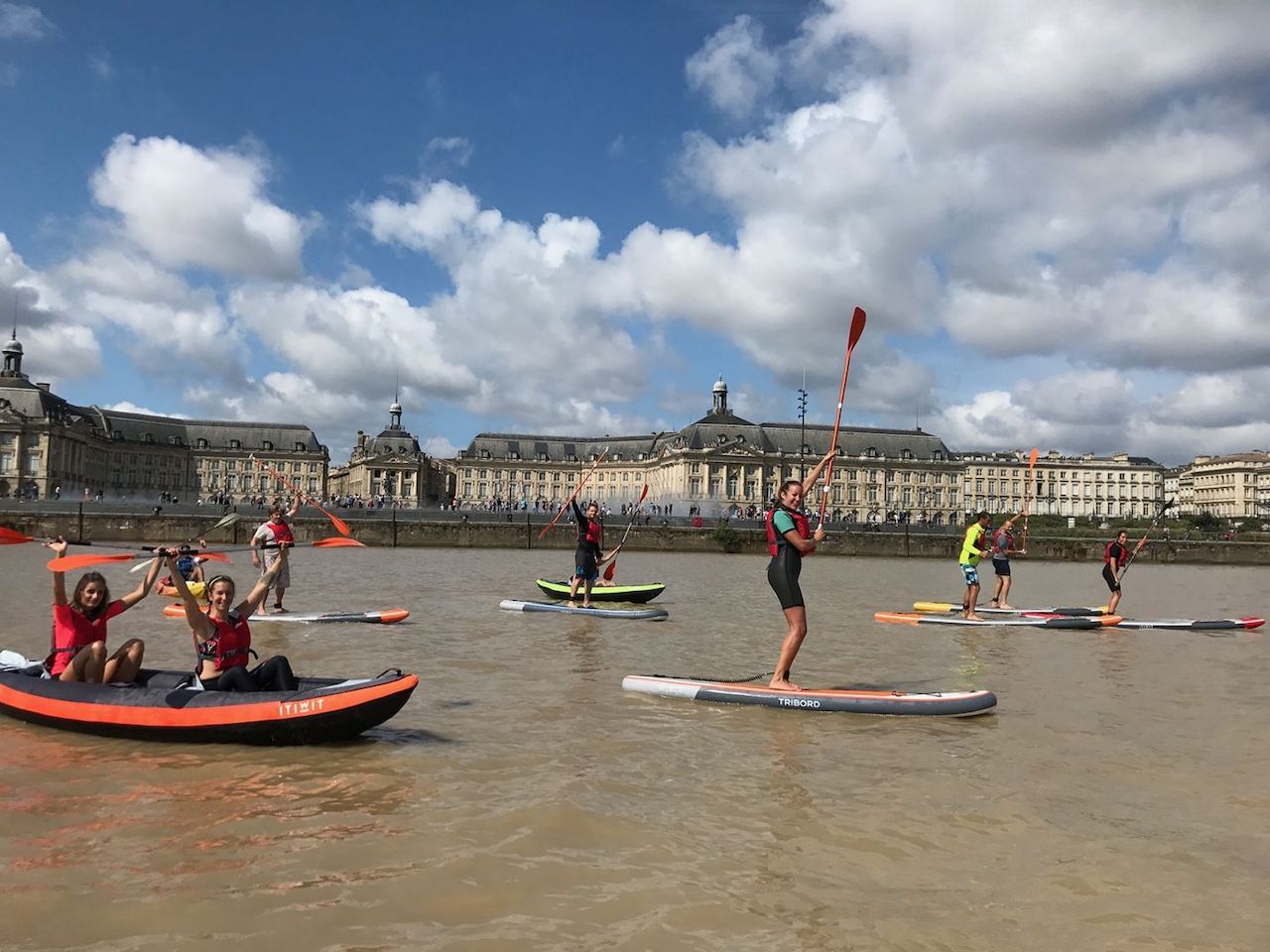 The flowing Garonne River is the city’s lifeblood, so show your appreciation for the river by embarking on a cruise along its broad waters. Boat cruises offer the chance to go deeper into the history and wine culture of the region in style. A great option to start a romantic night out is a sunset apero cruise, where you’ll experience a three-course wine tasting paired with local produce, cheeses and bread, and tapas while spending 90 minutes on the water. Bordeaux River Cruise also offers a comprehensive history cruise if you want to learn about the city’s wine and shipping history.

For a more adventurous expedition on the water, a two-and-a-half-hour guided canoe tour lets you explore wild islands, traditional fishing huts, 18th-century architecture, and masterfully engineered bridges. You’ll get an upper body workout while paddling the river with a focus on experiencing the waterfront and its surrounding architecture — rather than sipping. 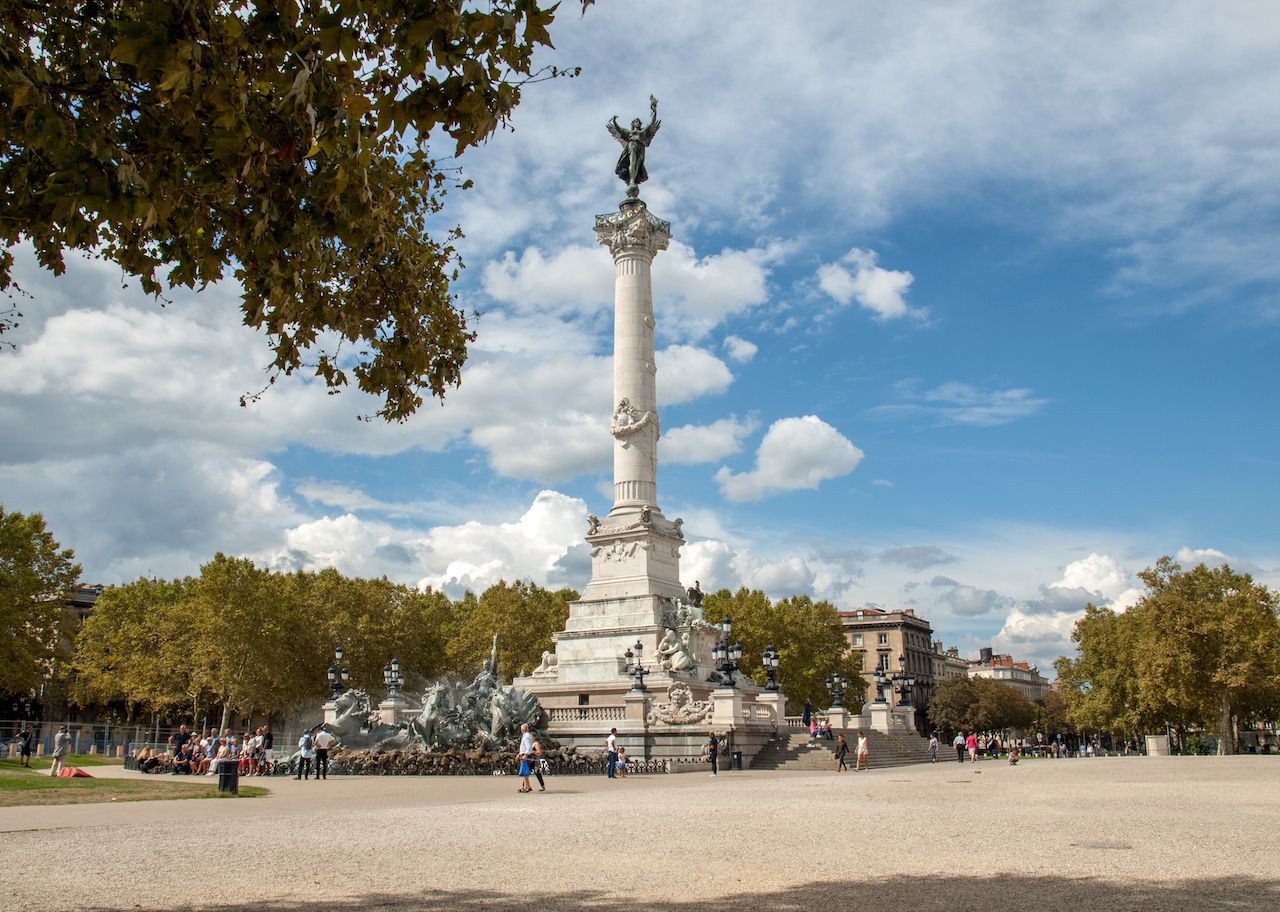 The quayside should be one of the first stops on your Bordeaux itinerary. The classic 18th-century facades of the historic buildings lining the river helped the city achieve its UNESCO-heritage-listed designation in 2007. Begin your stroll along the glitzy left bank promenade from Place des Quinconces, an expansive 63-acre plaza, past an architecturally stunning backdrop evoking the romance of a bygone era.

Cross the river at the Pont de Pierre to see where the waterfront has been transformed from a tired area into a trendy hotspot. A disused military barracks has found a new life as Darwin, a cultural space exuding hipster vibes with an eclectic mix of art space, eco-friendly cafes and organic grocers, urban gardening projects, and skateparks. If you prefer hops to grapes, don’t miss trying the local brew, Darwin beer, washed down with famous Arcachon Bay oysters.

Explore one of the world’s most bikeable cities 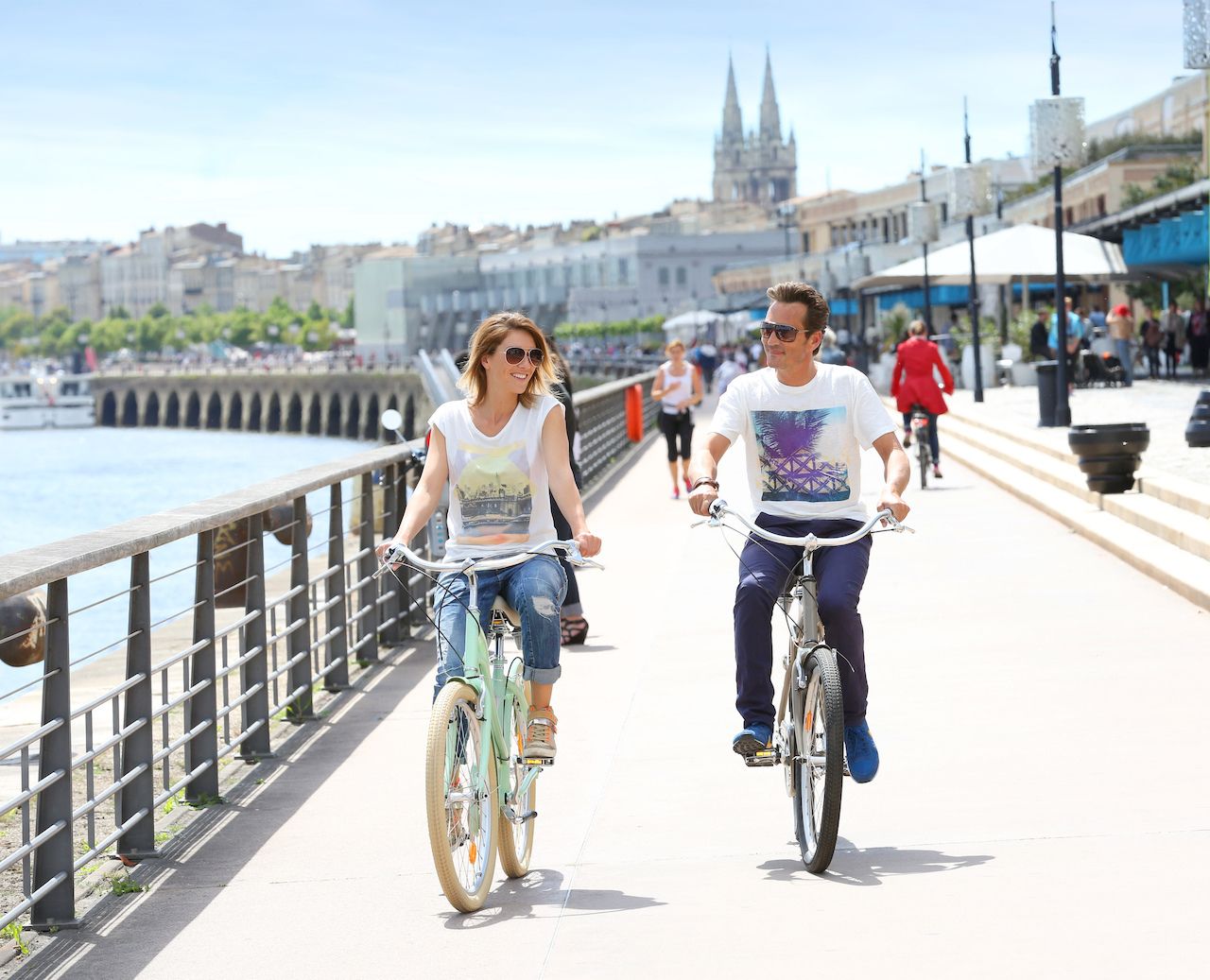 The Copenhagenize Index, which ranks cities by their bikeability, listed Bordeaux as fifth in the world in its 2019 survey. Its flat environs are best explored on two wheels as you’ll be able to take everything a bit more slowly, in true Euro-fashion, and not have to worry about renting a car or driving. Combine wine tasting with a guided tour with Bordeaux by Bike or hire a bike for the day for just $11 and explore the city at your own pace.

For a taste of quintessential French countryside, follow the river out of town until you hit the Lapébie bikeway, a disused railway line from Bordeaux to Sauveterre with a 15-mile stretch in and around Bordeaux that takes you past abbeys, villages, and endless rows of vines, culminating at the inviting Espiet lake. The pathway is named after the 1937 Tour de France winner Roger Lapébie, and on any given day you’ll see many of the region’s most passionate cyclists cruising its wide thoroughfare.

Cross-country cycling routes cut through Bordeaux towards the coast and in the opposite direction, towards the city of Toulouse. But here’s the big insider tip: You can take bikes on many trains for free. Hop the train to wineries in Médoc and Saint-Emilion, pedal your way between tasting rooms, and train it back to your lodging in the city at the end of the day. You’ll feel like a pro and will have worked off those calories just in time for dinner. Plan your routes in advance to coincide with train schedules.

Skydive or hot air balloon over the bay 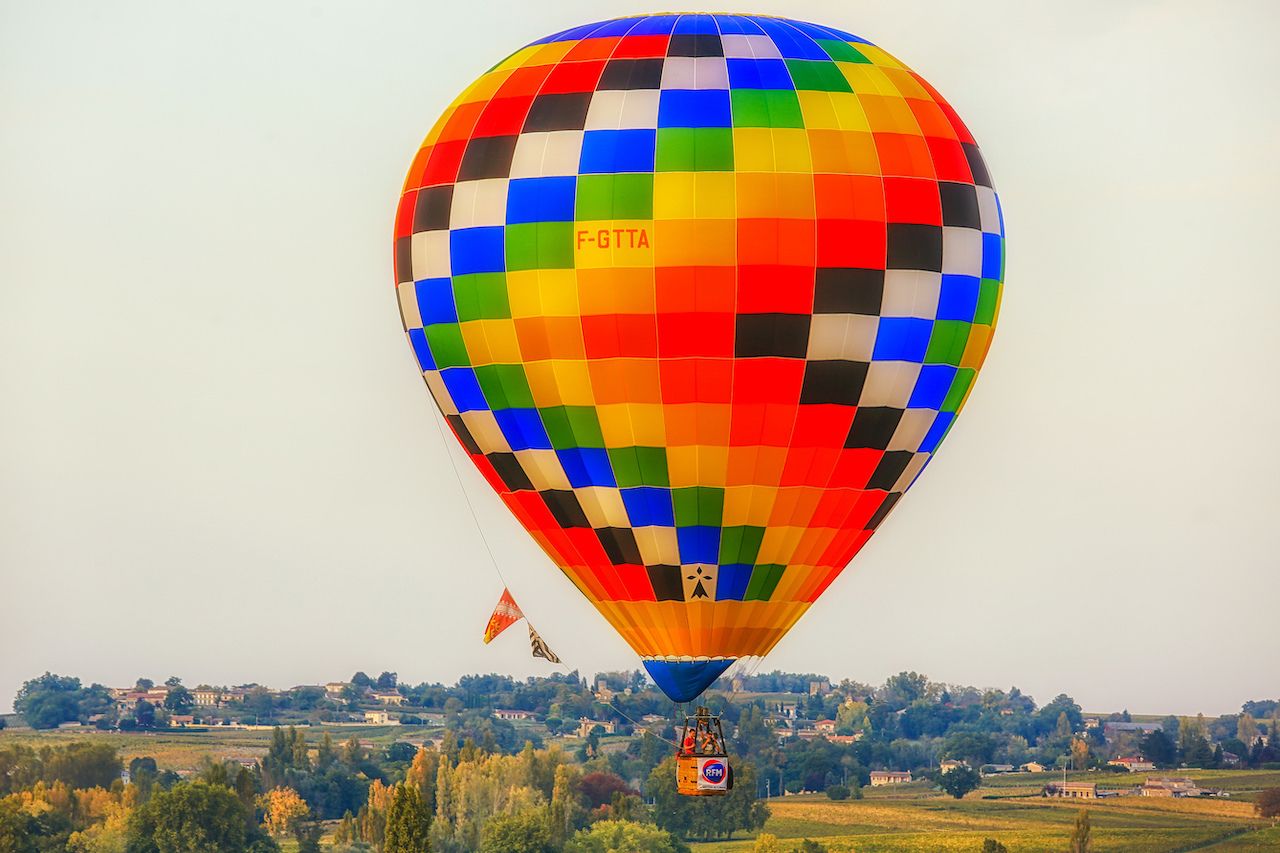 As fun as the biking is, thrillseekers get the best view of Bordeaux as they fall from a height of up to 13,000 feet over the vineyards. Bordeaux has become a popular spot for skydiving, thanks to the magnificent views it affords divers of the sea, estuary, mountains, forests, beach, and tiny villages of the area. Air Mauss offers divers the chance to freefall for almost one minute before sailing to a sandy landing spot along the coast for around $310.

Or, slow down the fall in the basket of a hot-air balloon. The charming nearby village of Saint-Emilion is the launching pad for hot air balloons. Floating above the region’s 12,000 hectares of vines is worth the pre-dawn start. La Ferme du Ciel offers flights daily starting at $226, or visit during October for the Saint-Emilion Hot Air Balloon Festival, during which dozens of visiting balloon operators take tours morning and afternoons. 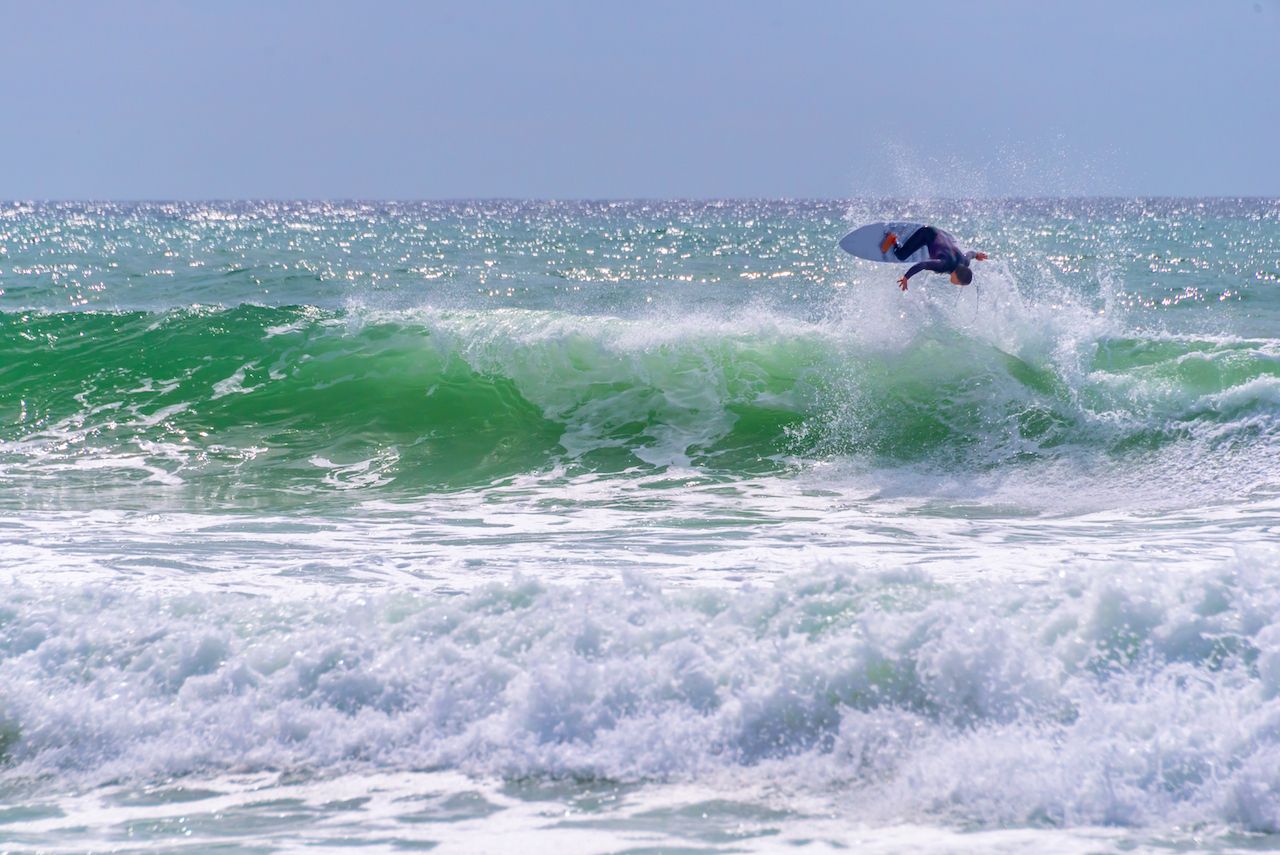 Surf’s up at Lacanau, just one hour by car or under two hours by train from Bordeaux. The area is home to a great break for beginners and intermediates alike, with consistent waves along its eight miles of sandy beaches. With dozens of surf schools in the area, you’ll be able to find a friendly instructor to show you the ropes, no matter the season. Start with Ocean Ride, which offers individual and group lessons specifically tailored for kids, teens, adults, and first-timers.

Those who aren’t keen to surf can still enjoy the coast. Europe’s biggest sand dune, Dune du Pilat, lies approximately 37 miles by train from the center of Bordeaux, and it’s well worth the visit. Rising 360 feet above sea level and stretching 1.6 miles along the coast, Pilat is a unique, ever-changing natural wonder. Test your stamina as you scramble up the giant dune to admire the impressive views across Arcachon Bay and Landes forest, then unleash your inner child and roll down the other side. 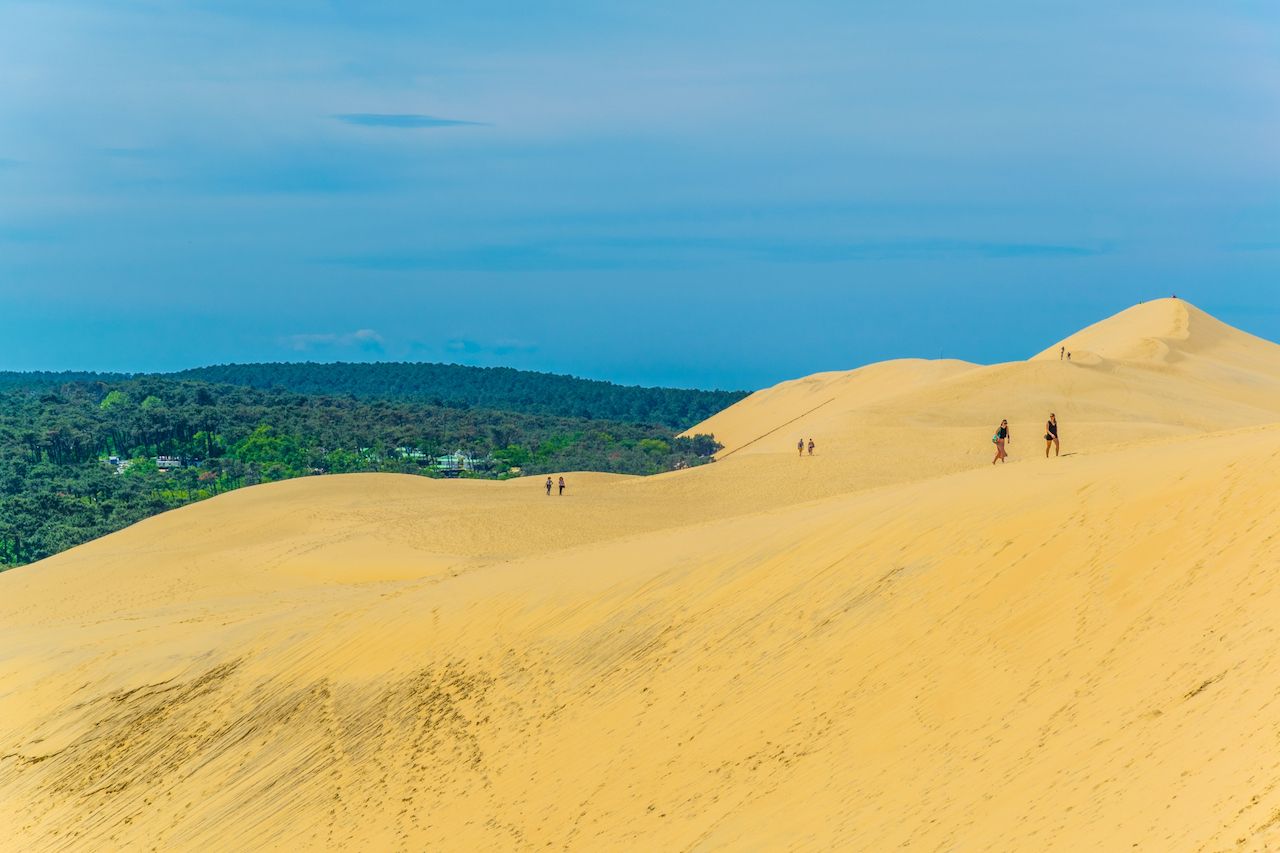 When it’s time to rest your weary legs, just out of town Les Cabanes de La Romaningue offers a quirky collection of bubble cabins, treehouses, and vintage caravans on its 80 acres of vineyards. Opt to explore the site’s bikeways, golf course, or nearby wineries, or just sit back and relax with a good book and a dose of French country air. The Le Saint James Hotel in Bordeaux proper attracts cyclists pedaling across the country, as well as other outdoor enthusiasts, making it a great option for lodging if you want tips on routes and conditions. Rooms start at about $200 per night.

20 Epic Wine Regions To Visit Before You Die