It’s difficult to avoid eating coconut in Southeast Asia. It appears in curries and soups, it’s used to flavor sticky rice, and, when it comes to dessert, coconut is the star of the show. It pops up in Indonesian fruit cocktails, in Thailand’s coconut ice cream and custard, and in Vietnamese sweet corn pudding. And then there’s buko pie, which is a combination of young coconut meat and sweetened condensed milk that’s baked in a traditional pie crust. It’s one of the most iconic coconut-based desserts in all of Southeast Asia, and it comes from the Philippines — specifically, the Laguna province on Luzon, the country’s largest island.

Jappy Afzelius, chef at the Filipino restaurant Tsismis in New York City, is originally from Dumaguete, on the island of Negros. He has fond memories of eating buko pie with his family on special occasions. For his family, buko pie is a type of pasalubong — a Tagalog phrase meaning “bring home something for me,” which refers to the tradition of bringing souvenirs, often food, back home after a trip.

“After long drives to the beaches, two hours away from Manila, we would buy buko pie on our way home,” Afzelius says.

It wouldn’t have been right to return to the family home empty-handed. He always picked up a few buko pies from a roadside vendor in Laguna on the journey home, but never from a grocery store in his neighborhood.

Laguna is the undisputed home of buko pie, but the popularity of this dessert means there are a number of bakeries that claim to be the original inventors. That title, however, belongs to one woman, and one woman only: Nanette Pahud. Though buko pie is now considered a traditional Filipino dessert, it only entered the culinary lexicon of the Philippines in 1965, when Nanette and her sisters opened Orient Bakery.

In the 1950s, Nanette worked as a cook for an American professor teaching at the University of the Philippines in Los Banos, Laguna. She sharpened her baking skills while working for the family and learned how to make apple pie while taking cooking classes at the same time.

Pahud longed to open a bakery, so when she stopped working for the professor, she began experimenting with her own recipes. The recipe for apple pie stuck with her, but without abundant apples to supply the ingredients for her pies, Nanette turned to the much more widely available coconut. It wasn’t just any coconut, though. Nanette decided to use the not-yet-ripe buko (young coconut) in her pies.

As the name suggests, young coconut still has green skin (rather than the hairy brown shell you’re used to seeing on ripe coconuts), which is typically shucked off to reveal a white husk that’s carved to a sharp point at the top. The young coconut is still filled with coconut water, while the flesh is sweet and soft like a jelly. 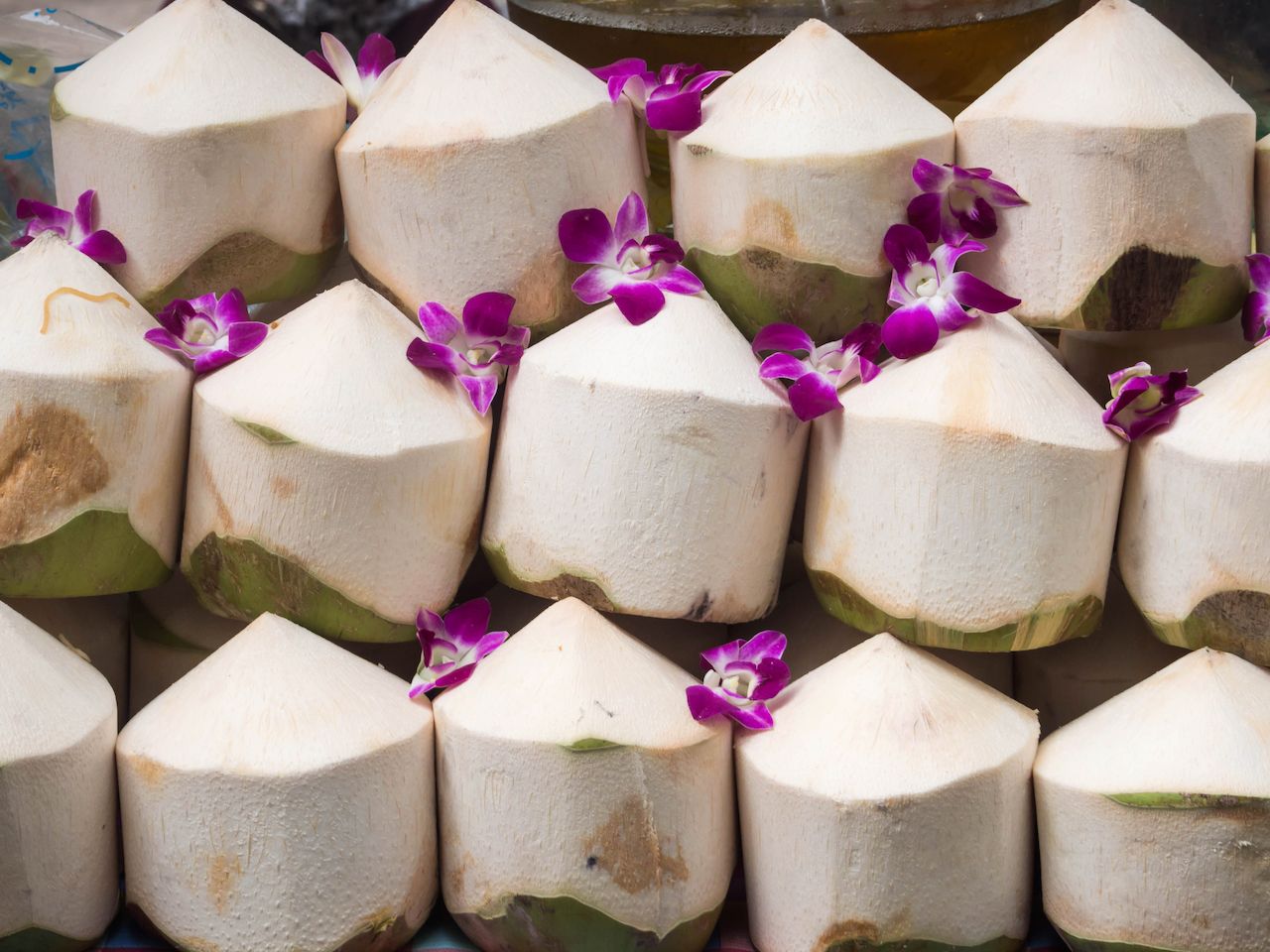 Once she settled on a recipe, Pahud — who has since moved back to the United States and left the bakery under the care of her sister, Sol — was ready to debut her pie shop. One history of the company recounts that the family hoped to name the business “The Original Buko Pie,” but the Department of Trade and Industry considered “original” an adjective and therefore not appropriate for the name of a company. Eventually, the Pahud sisters settled on Orient Bakery — a combination of the phrase “original enterprise.”

Pahud’s buko pies were an instant hit in Laguna. The shop is so popular that some blame traffic on the national highway on customers who double-park their cars on the side of the road while waiting in line for a pie.

The key to success, according to an article examining the bakery’s business model, is fresh ingredients. Young coconuts are harvested every day to make the custard-like pie filling. Once the daily supply of coconuts runs out, so do the pies. No preservatives are used in the filling, and Orient won’t even use a young coconut that’s a day past its pick date in its buko pies.

“Most Filipinos have this mentality that it’s best when it’s coming from Laguna or Tagaytay,” Afzelius says. “If you’re having clam chowder, it’s best in New England, even if you can get in San Francisco.” 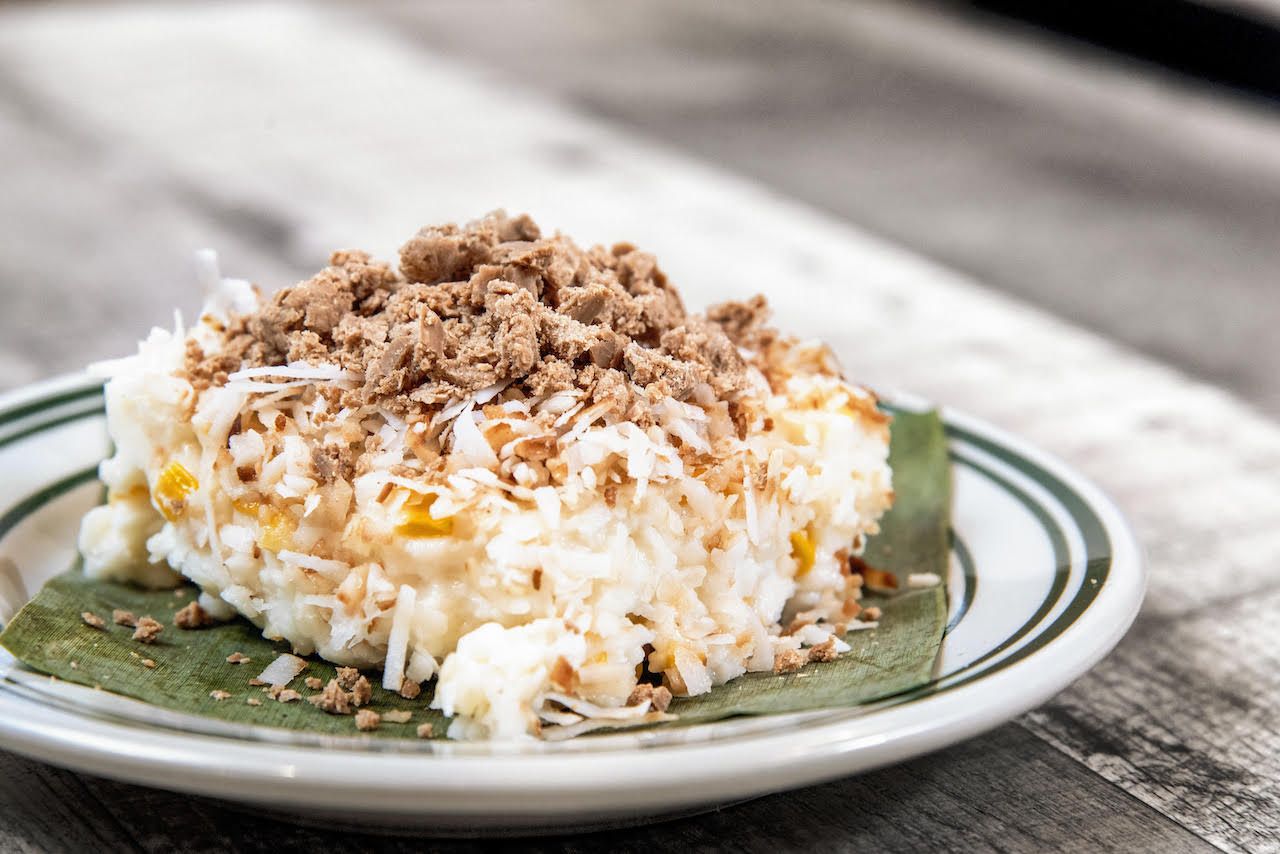 Buko pie has traveled far beyond its original home. Afzelius serves a variation of it at Tsismis that’s prepared in a skillet with coconut and corn custard, which he calls maja blanca. People who once claimed to not even like coconut are “shocked” by how much they love the coconut pie at Tsismis. Afzelius has served his play on buko pie to his family, but his grandmother still sometimes requests that he make the traditional version on special occasions, like birthday celebrations. It’s a gesture that no matter how long you’ve been away or where you’ve gone, family is never far from your mind.

“It symbolizes that you went away for a holiday, but you also thought about your family,” says Afzelius. “That’s what buko pie means to me.”

DessertThe 15 Best Coconut Desserts Served Around the World
Tagged
Dessert Philippines
What did you think of this story?
Meh
Good
Awesome