The Philippines may be known for its pristine beaches and lush tropical landscapes, but the country’s cuisine — and its desserts in particular — are worth a visit alone. Rich and creamy Filipino desserts incorporate tropical fruits and local ingredients like jackfruit, coconut, and pandan. You can learn a lot about the Philippines just by trying out its food.

For instance, plenty of recipes call for malagkit, or glutinous rice. There’s no doubt that rice is a staple food in the Philippines, and it’s a well-known fact that a Filipino meal is incomplete without it. Rice is not only eaten with savory dishes but is also found in local desserts.

As an archipelagic country made up of many islands, the Philippines is also culturally and gastronomically diverse. People in many regions and towns have developed their own variant of popular desserts by adding a local twist to an otherwise common dish. You may eat the same dessert twice in different parts of the country and have completely different experiences.

Local cuisine recounts the history of a country just from its ingredients and methods of preparation, and Filipino food plays a huge role in showcasing the country’s rich culture. Even if you don’t have a sweet tooth, you’re bound to find something that will surprise and excite your palate.

Ice scramble (or iskrambol) is an iconic Filipino street food that’s often sold outside of schools in a small six-ounce plastic cup. It became popular in the 1970s as a cold, pink slushie dessert made with crushed ice, evaporated milk, banana extract, sugar, and few drops of red food coloring. Much to the delight of kids, ice scramble vendors started adding various toppings like mini marshmallows, powdered milk, chocolate syrup, wafer sticks, and colored sprinkles. Ice scramble tends to make Filipinos very nostalgic for their childhood whenever they make it at home. 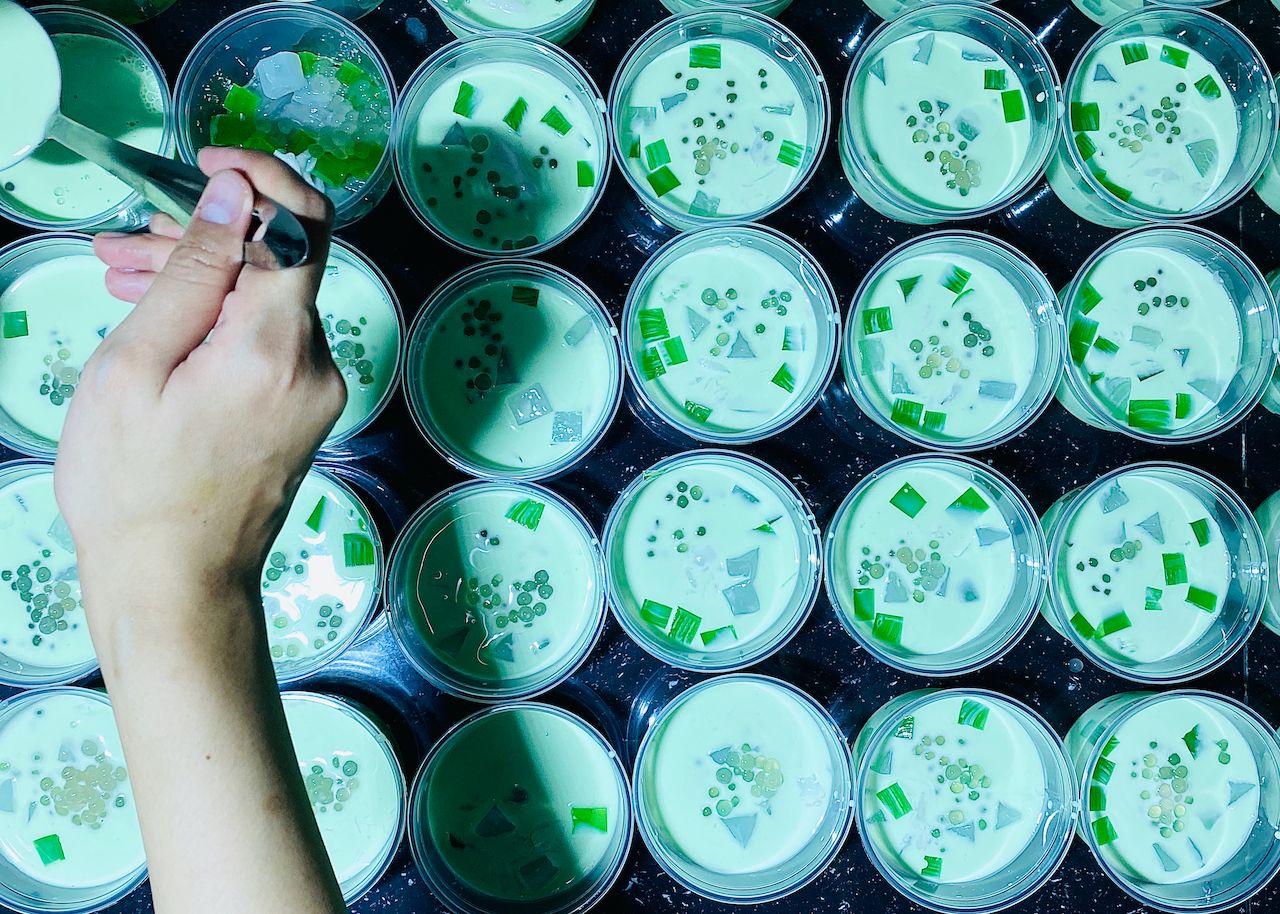 Buko Pandan is a must at every Filipino celebration and gathering. It makes an appearance at birthdays, fiestas, major holidays, and even casual family get-togethers. It is a sweet, creamy, and refreshing dessert that is perfect for a hot day. The name tells you the two main ingredients: buko (coconut) and pandan leaves. Also included are sago pearls (small balls of starch similar to tapioca), evaporated milk, gulaman (agar-agar), and condensed milk.

The traditional way of preparing this dessert is by boiling pandan leaves to extract the flavor and then cooking gulaman over that same water. However, since pandan leaves and gulaman aren’t always easily available, people often use powdered gulaman and buko pandan flavoring instead. The emerald green cooked gulaman cools and solidifies in a flat container before it’s cut into cubes, which are then combined with the rest of the ingredients in a bowl so that the final dessert, served cold, resembles a Midwestern Jell-O salad. 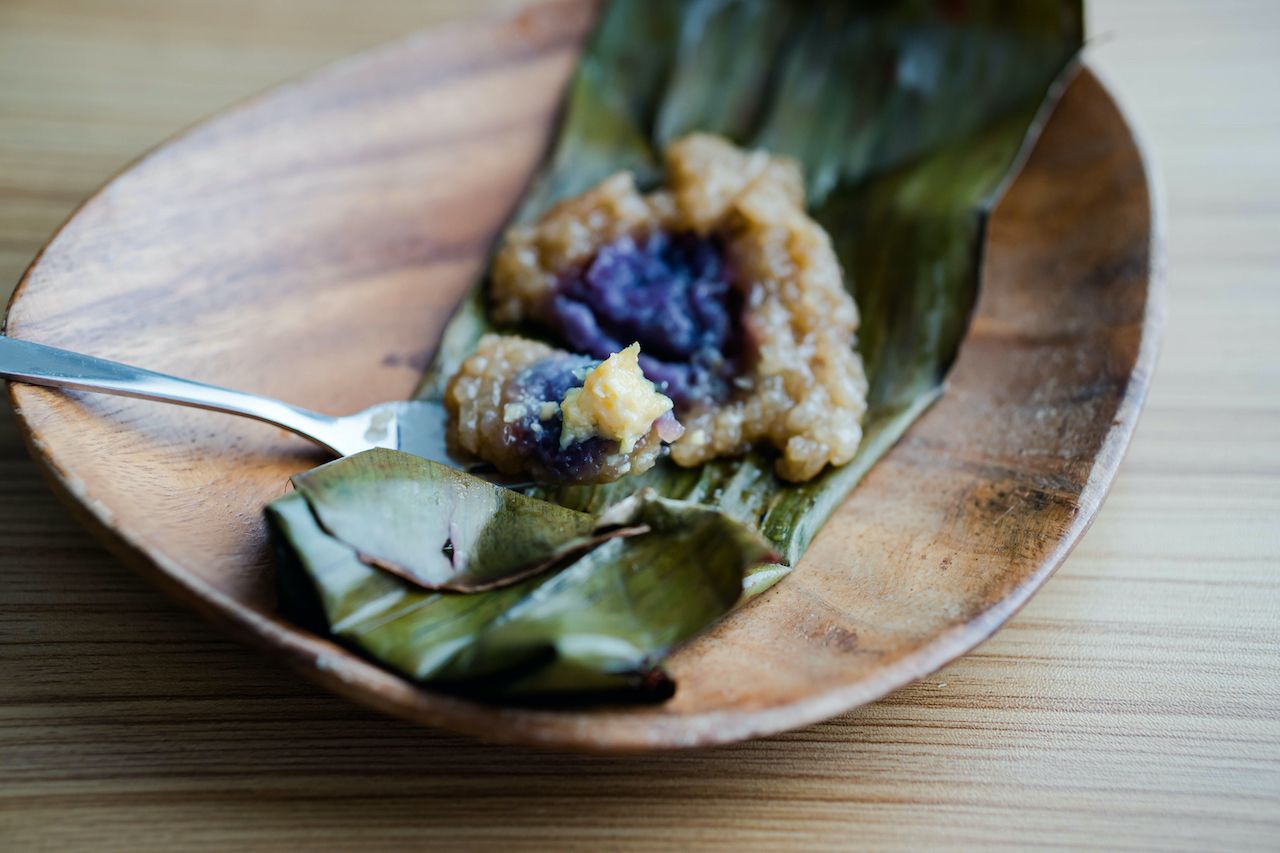 When glutinous rice is cooked in coconut milk with sugar and salt, wrapped in banana leaves, and then boiled in water, what you’ll end up with is a Filipino delicacy called suman. This pre-colonial dessert is essentially a rice cake shaped like a log and served with your topping of choice. Common options are coconut jam, condensed milk, grated coconut, brown sugar, or latik (solidified residue of reduced coconut cream). For additional flavor, you can even include cubed ripe mangoes in the mixture before cooking it further. 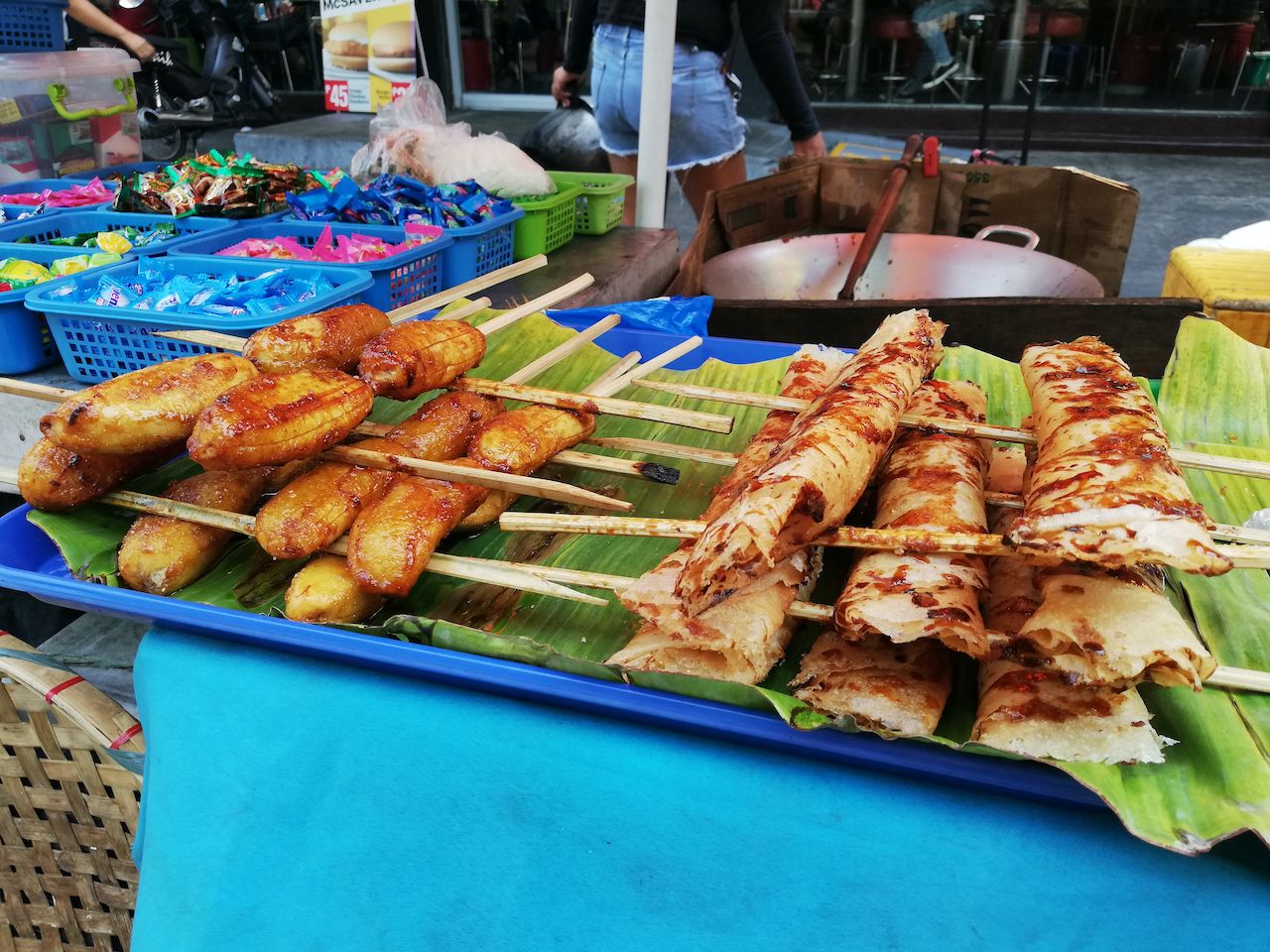 In the Philippines, barbecue refers to marinated grilled pork pieces that are sold skewered on bamboo sticks, similar to Southeast Asian satay. Think of this dessert as a mix of local fruit, sugar, and the barbecue tradition in the Philippines. Bananacue is what you get when deep-fried bananas coated in caramelized brown sugar are sold on bamboo skewers at street food stalls. They are good for an afternoon snack or as a dessert, depending on the mood you’re in. 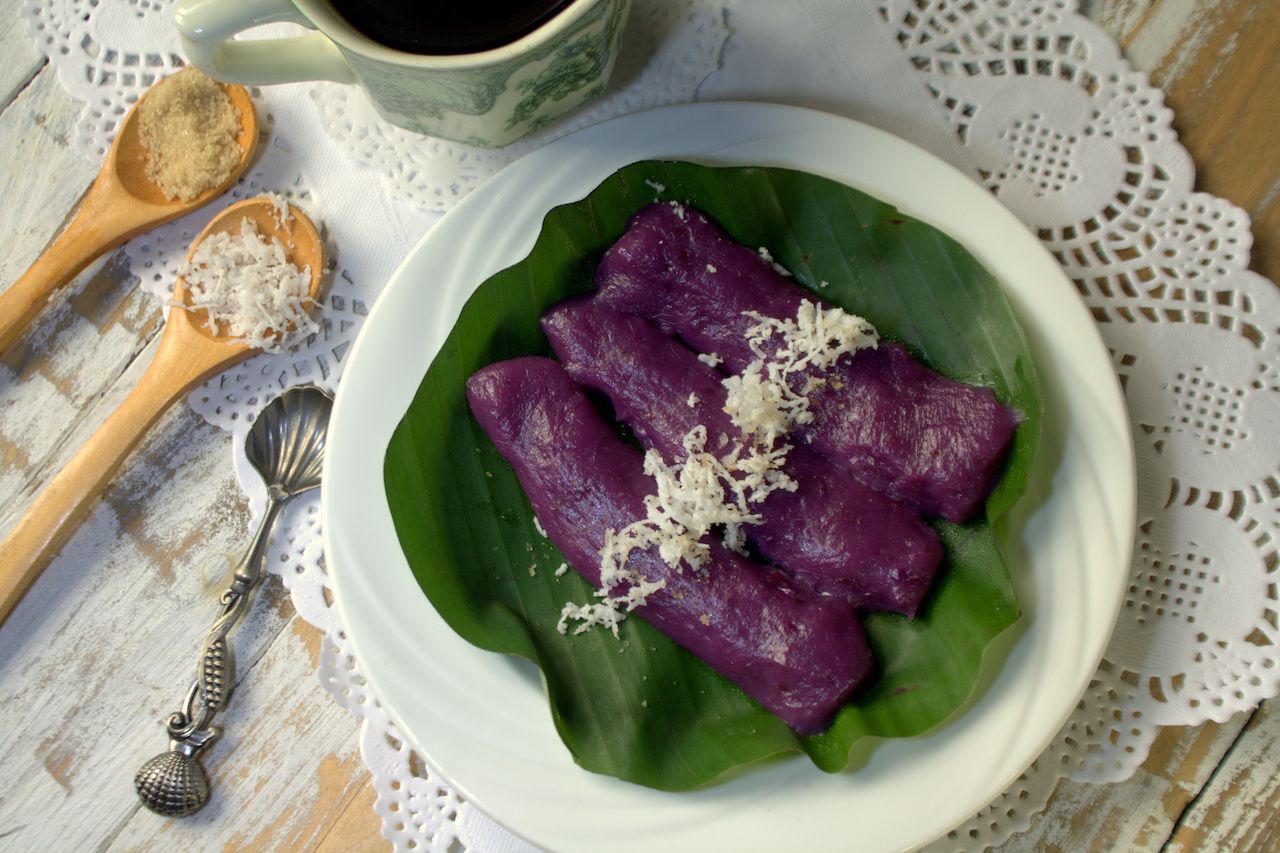 One sure sign Christmas is approaching is that puto bumbong vendors begin to pop up all over the Philippines. They’re often found hawking their treats near churches to appeal to churchgoers, especially those who regularly attend the simbang gabi, which is the nine-day series of dawn Christmas masses.

Although puto bumbong is just one of the many rice cake desserts of the Philippines, its method of preparation and signature color differentiate it from the others on this list. This purple rice cake is cooked by steaming sticky purple rice (pirurutong) and glutinous rice inside a bamboo tube (bumbong). To cook it, you need a lansungan, which is a special tin or stainless steel steamer with metal cylinders that can hold bamboo tubes that are made for preparing puto bumbong.

Puto bumbong is served on a banana leaf and topped with margarine, grated coconut, condensed milk, cheese, and muscovado sugar. The rice cake and grated coconut give the puto bumbong its distinctive texture, while the toppings deliver a dynamic sweet and salty flavor. Puto bumbong is not very easy to make, so this dessert is one of the things Filipinos always look forward to during the Christmas season. 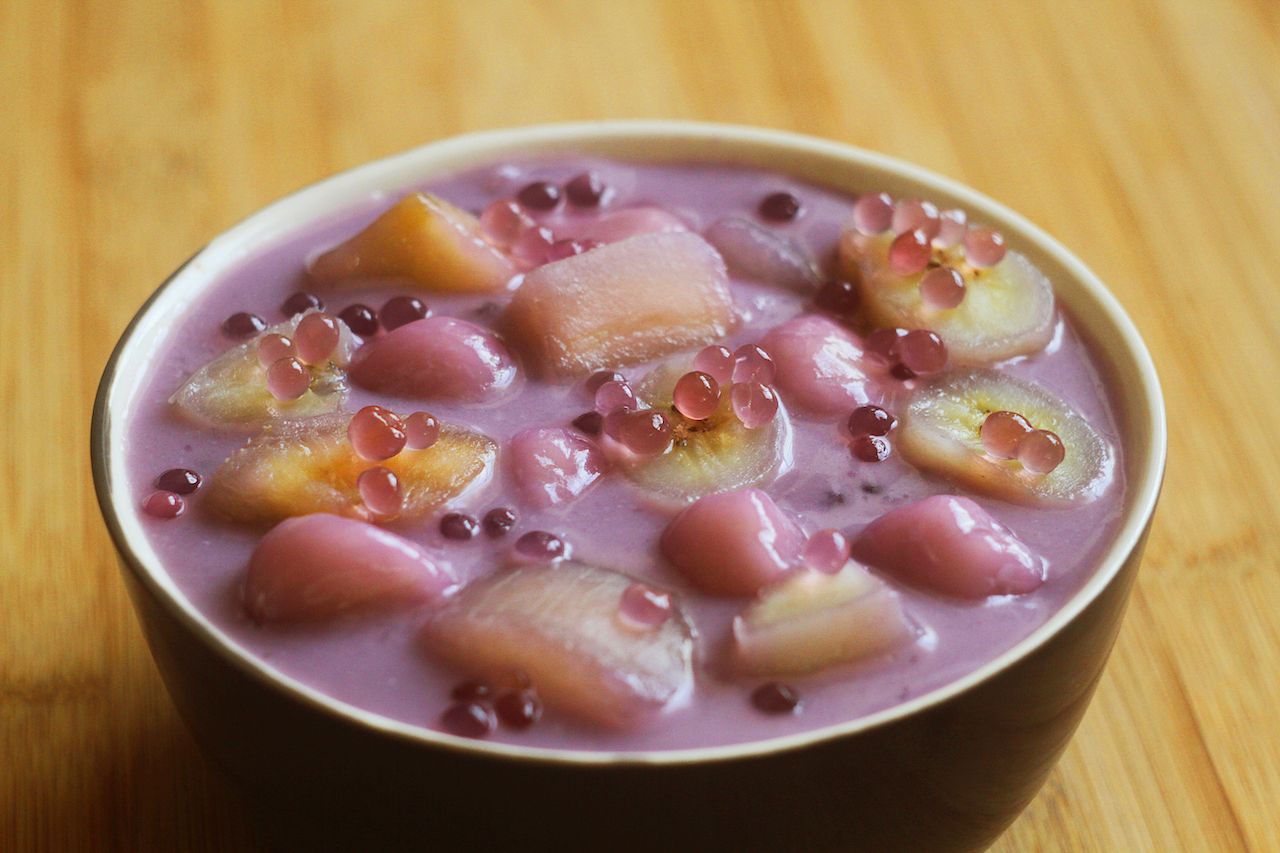 For a rich dessert, you can’t go wrong with ginataang bilo-bilo, a dessert soup that originated in Cagayan, a city located in the Philippines’ northern island, Luzon. You make ginataang bilo-bilo by cooking glutinous rice balls, sweet potatoes, sago pearls, and sweetened plantains in coconut milk, which are common ingredients in many other Filipino desserts. For additional flavor, you can also add jackfruit, coconut shavings, or ube to the coconut milk alongside the rice balls. 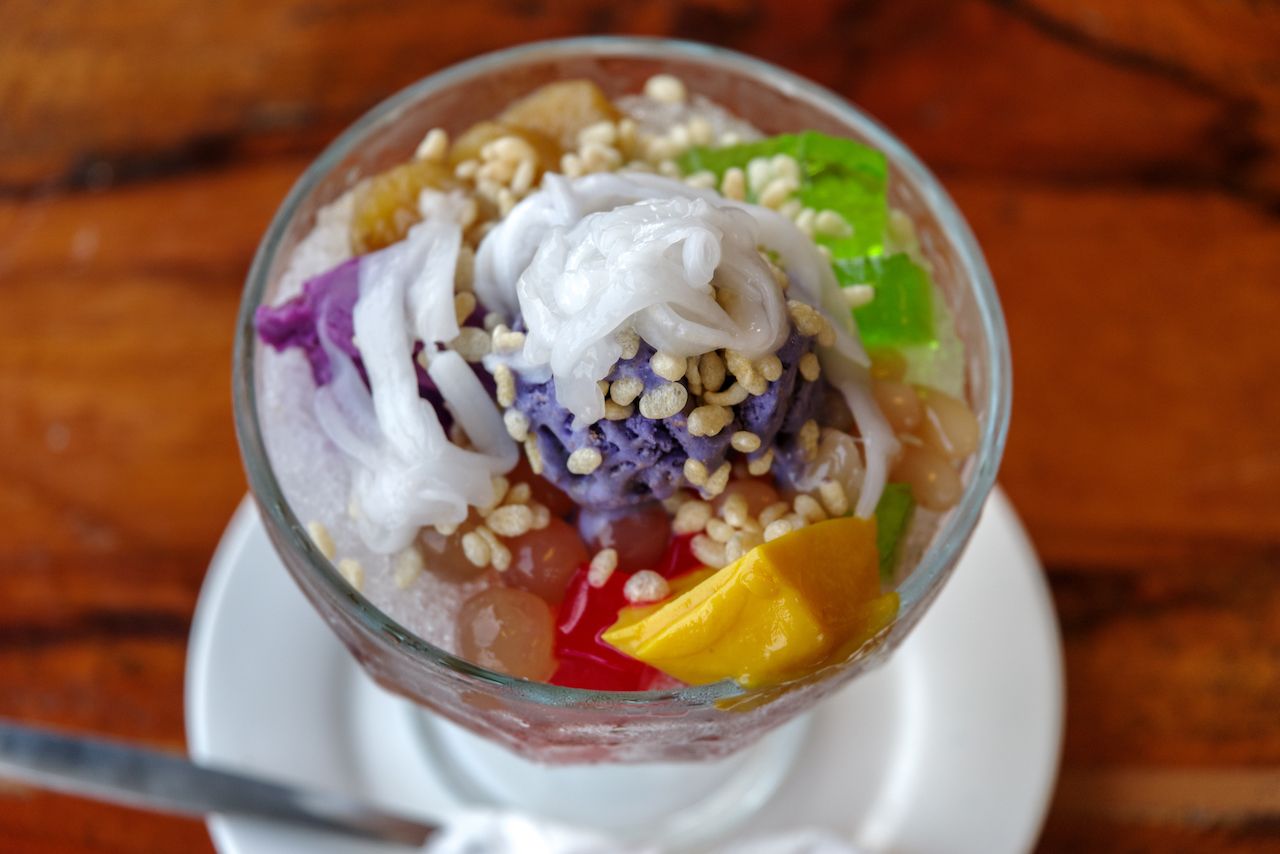 Some people are very particular with the position of the ingredients, placing the fruits and beans at the bottom, crushed ice in the middle, and ice cream and leche flan at the top. However, you ultimately mix them all together anyway (hence the name), so it doesn’t matter in the end. 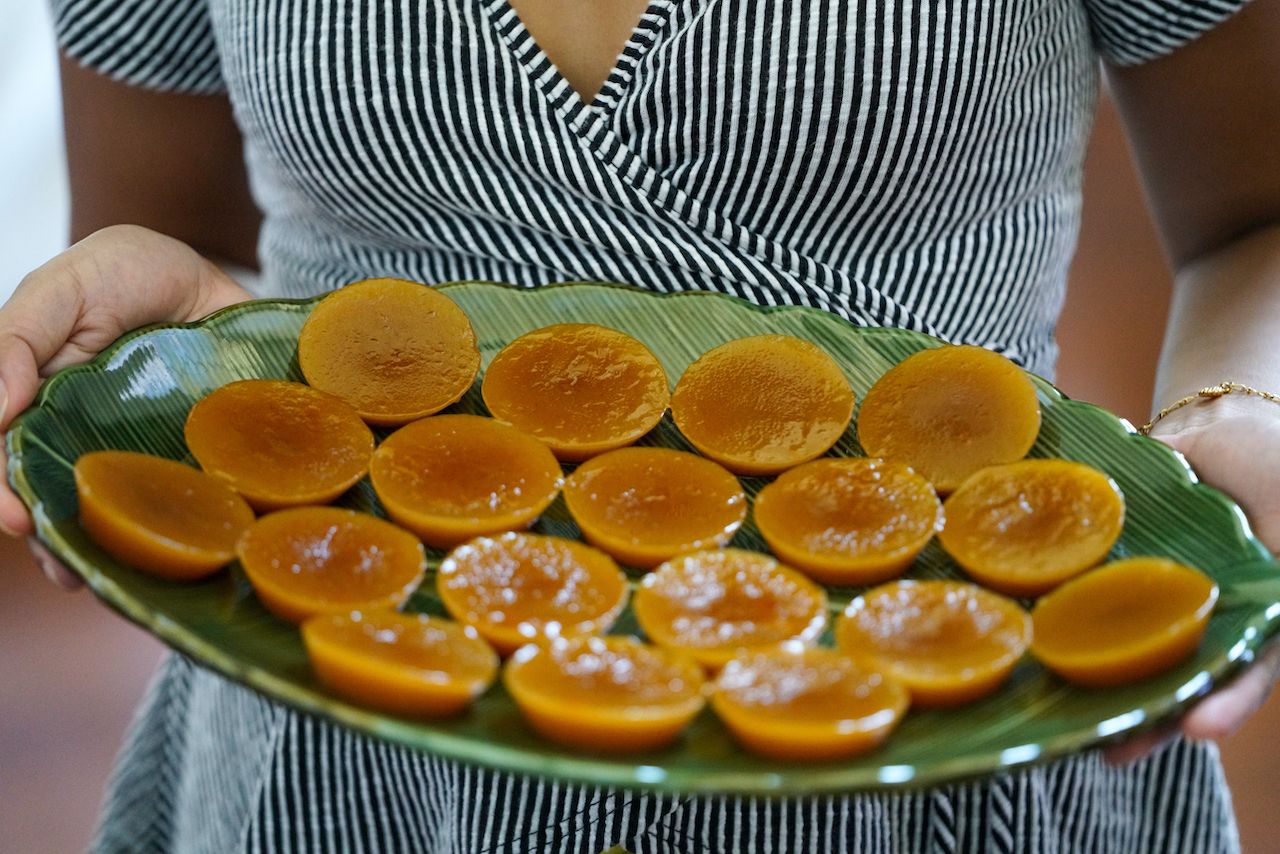 Kutsinta (also spelled cuchinta) is one of the most popular rice cake desserts in the Philippines. Some people theorize that the name was derived from the Chinese term “kueh tsin tao,” which refers to a small steamed cake that is often eaten as a snack. Kutsinta’s jelly-like texture sets it apart from other rice cakes, and they are fairly easy to make.

All-purpose flour, rice flour, brown sugar, and water are mixed in a bowl and then combined with lye water and achuete powder. Lye water makes the kutsinta chewy and sticky while the brown sugar combined with achuete powder gives it a rich, brown color. It’s left to steam and then it’s served with grated or shaved coconut on top. 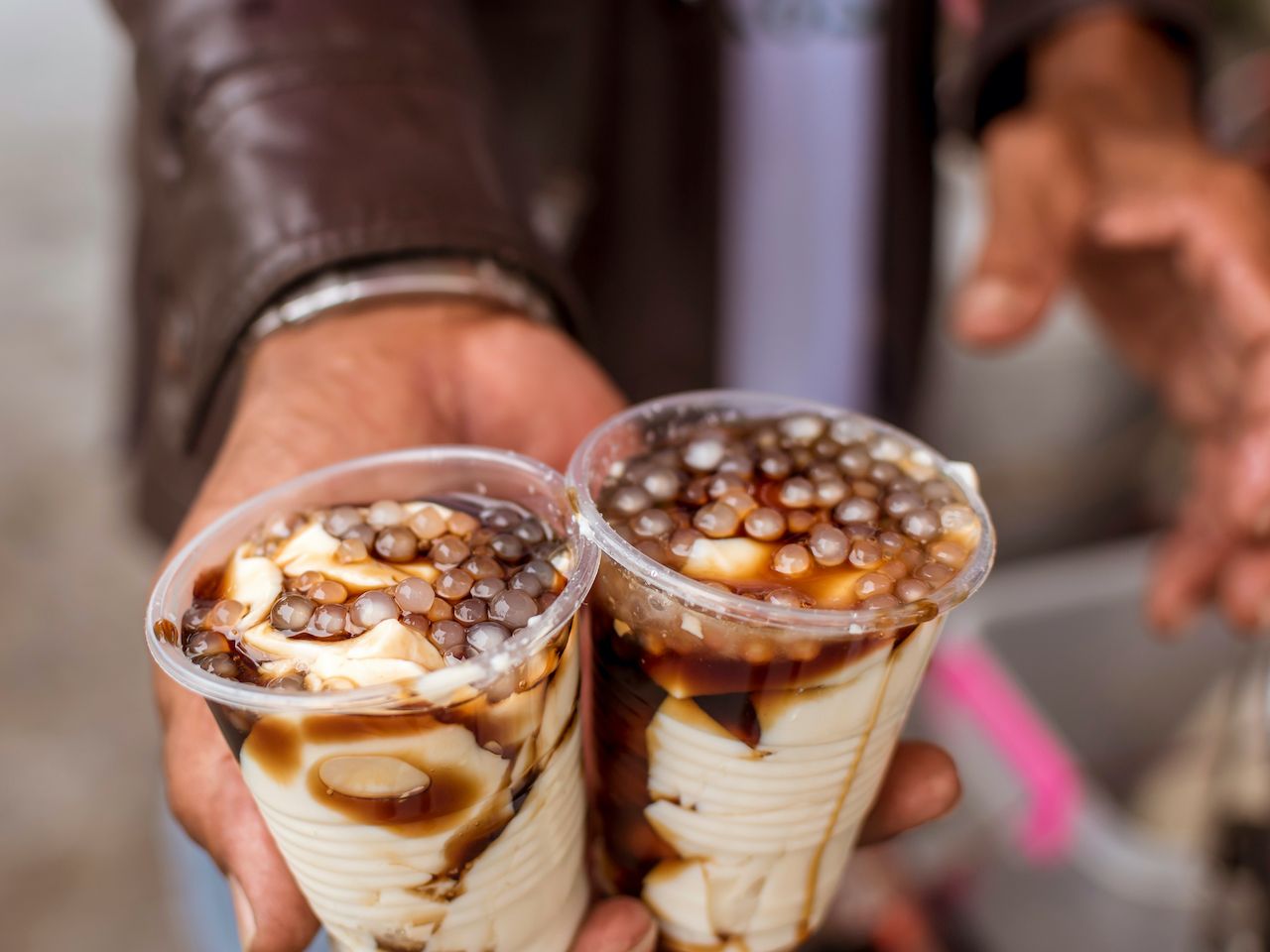 In the Philippines, you can always hear a street vendor calling out “Tahoooo!” every morning. The taho peddler walks down the street carrying two large aluminum buckets, one with the soft tofu base and the other containing arnibal (brown sugar syrup) and sago pearls. You wait for them to pass by your house so you can buy a serving of this warm, chewy, and sweet concoction. It’s a popular comfort food that comes in many different flavors, including strawberry, pandan, and melon taho. Nowadays, you can also find taho in hotels and restaurants, but nothing replaces the experience of frantically going out on the street with a mug in your hand when you hear the taho peddler come by.

DessertThe 15 Best Coconut Desserts Served Around the World
Tagged
Dessert
What did you think of this story?
Meh
Good
Awesome