The word “salad” typically evokes visions of plump tomatoes and leafy green vegetables. Salads are associated with a healthy lifestyle, freshness, farmers’ markets, and self-discipline. Unless, of course, you’re from the Midwest, in which case salad has another meaning that’s in direct opposition to the above connotation: In this part of America, salad can mean dessert.

Dessert salads make up an entire segment of American cuisine. Although the dish is enjoyed all across America, it’s especially prevalent in the Midwest and Western regions, especially in states like Utah and Minnesota. These decadent, indulgent dishes feature heaps of canned fruit and mini marshmallows floating in Jell-O or pudding, and they’re often enveloped in Cool Whip. And yet, somehow, Midwesterners have retained the right to call them salads. Make it make sense! Still, it is generally agreed upon that these desserts are so delicious the category doesn’t need to make sense.

“These types of dishes always have cream cheese, whipped topping, or both, and they often combine both sweet and salty flavors, which makes them extremely addictive,” Meggan Hill, the founder of the recipe website Culinary Hill, tells me. “And folks in the heartland are not plagued with food snobbery which might shun certain ingredients like Cool Whip or Miracle Whip.”

The appeal of these dishes for anyone with a sweet tooth is evident from just a quick scan of the ingredients. Putting aside the signature fluffy and creamy sweetness, another important factor in the dessert salad’s staying power at the American dinner table is nostalgia. These dishes are a staple at Thanksgiving spreads and church potlucks alike.

“I grew up eating food like this at home and at parties with relatives and friends,” Hill says. “There is something so comforting about being surrounded by familiar people and food, and that’s what I remember the most about growing up in the Midwest. We can always depend on our family and friends to prepare the meals we know and love. No matter what happens, my mom will always make baked ham and Snickers salad on Christmas morning.”

Here are the 10 best dessert salads from the Midwest and beyond to try at your next family gathering. 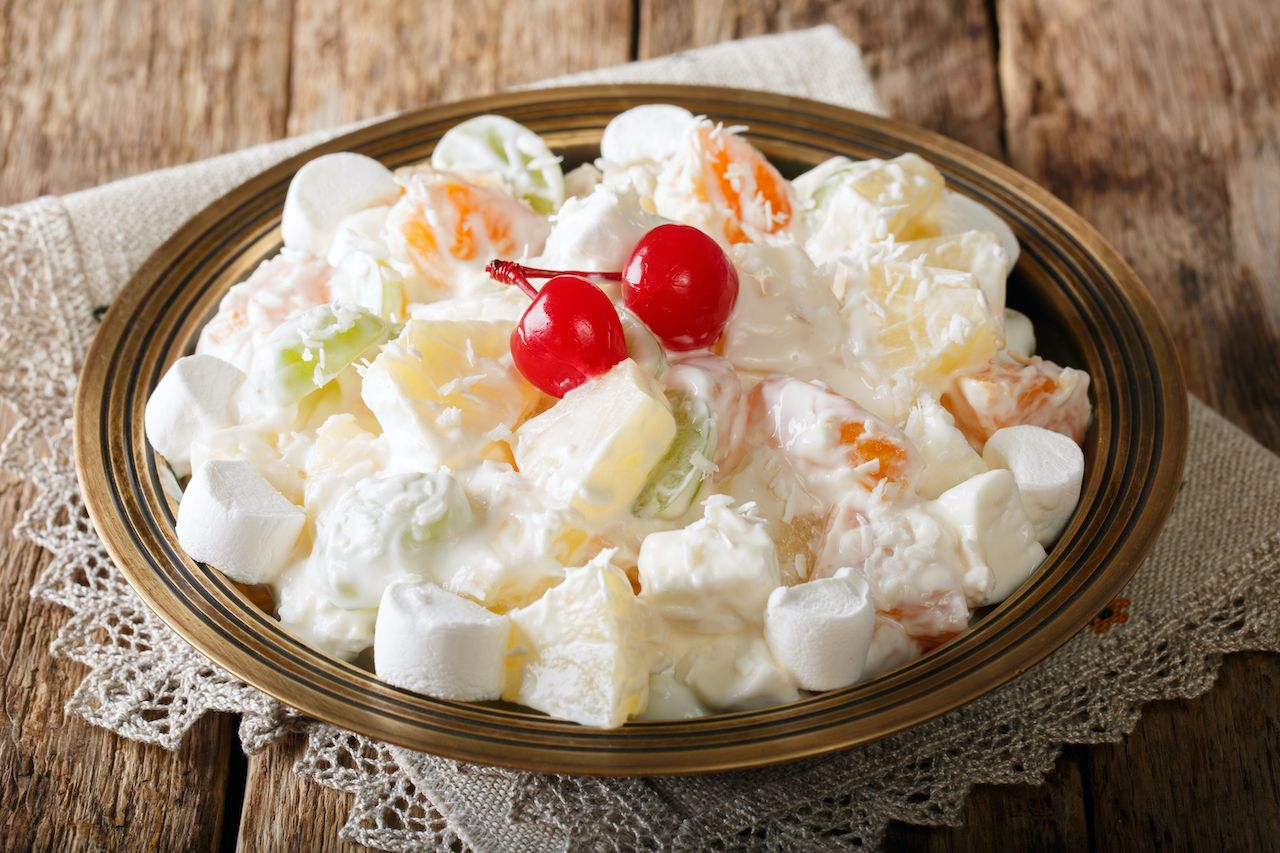 This is perhaps the most widely known variety of dessert salad. You’re likely to see bowls piled high with ambrosia behind the deli counter at your local grocery store. As with many other dessert salads, you’ll find canned mandarin oranges, canned pineapple, and Cool Whip on the ingredients list. However, there are several elements of ambrosia that set it apart from other dessert salads: First of all, the fruit is mixed with mini marshmallows. Next, it’s sprinkled with coconut flakes and topped with maraschino cherries.

A mainstay at gatherings like church picnics and potlucks, this cottage cheese-based dessert combines any flavor of Jell-O you desire — strawberry is a popular choice — with canned fruit like pineapple and mandarin oranges, as well as Cool Whip. Like many other dessert salads, Jell-O fluff might have become so popular because it requires only packaged, shelf-stable ingredients and a few stirs of a sturdy spoon to put together.

One close relative of Jell-O fluff is Jell-O salad. The names are sometimes interchangeable, but more often, Jell-O salad refers to an entirely different dessert, in which Jell-O is mixed with Cool Whip, set until it firms into gelatin, is topped with fruit like strawberries or maraschino cherries, and is finally cut into squares. It’s basically a fluffier version of the classic Jell-O cups you remember from childhood.

While other dishes on this list tease around the “dessert” element by downplaying the sweetness with heaps of fruit, Snickers salad gets straight to the point: This decadent treat is flecked with pieces of Snickers. Especially popular in Utah, it combines the candy bar pieces with pudding and chunks of Granny Smith apples for a touch of tart flavor, a crunchy texture, and a pop of bright green and purple color. Like most other dessert salads, all the ingredients are drenched in Cool Whip. 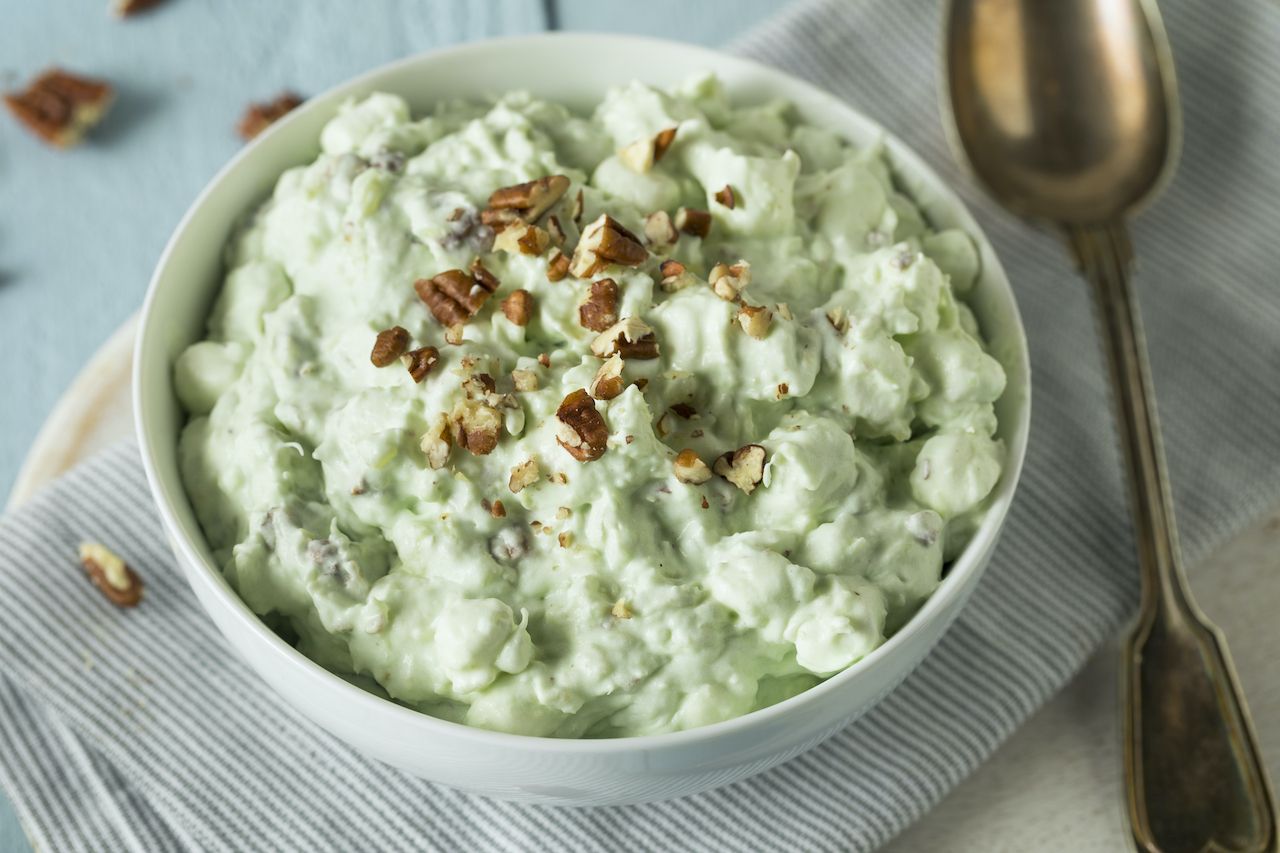 This green dessert goes by many names, including pistachio delight, green fluff, and green goop, but it’s most commonly known as Watergate salad. Regardless of what you call it, the salad is a fluffy combination of pistachio Jell-O, mini marshmallows, crushed pineapple, and a handful of walnuts. The origins of the name are a bit of a mystery. What is known is that the dessert experienced a surge in popularity in the 1970s around the time of the Watergate scandal. Kraft had recently released pistachio flavored Jell-O, and, according to MyRecipes, the company claims that the modern iteration of the dish is based on its original Pistachio-Pineapple Delight. Still, there are other interesting theories as to how this dessert got its name. NPR speculates that it might be a variation on a similar dessert called Watergate cake, which got its name due to all the nuts in the recipe — a reference to the chaos in the White House at the time.

“When I was a little girl we always went to my aunt’s house for the holidays,” Amanda Formaro, the blogger behind Amanda’s Cookin’ wrote in an email. “After dinner the desserts came out, and wow, Aunt Val could really put out a spread! There was homemade chocolate layer cake, fruit tarts, English Trifle, and Watergate salad. I remember my brothers and I fidgeting in line eagerly waiting for mom or dad to put desserts on our plates. All three of us went back for seconds of Watergate salad! To this day, whenever I make green fluff, memories of my childhood holiday dinners come flooding back. I can’t imagine a holiday without it.”

Not to be confused with its neighbor, Watergate salad, seafoam salad uses Jell-O, not pudding, as its base. And while most other dessert salads that incorporate Jell-O can use any flavor, seafoam salad always uses green Jell-O, as the name suggests. The simple combination of crushed pineapple, lime Jell-O, Cool Whip, and cream cheese can be mixed together and served in a bowl. However, another popular version sets the ingredients in a Jell-O mold and adds canned pears, rather than pineapple, to the mixture.

Inexpensive department stores that sold a variety of household necessities — at the time known as five-and-dime stores, so named because everything cost a nickel — had a hand in popularizing seafoam salad, sometimes also called lime fluff. The dish was a staple at five-and-dime lunch counters like those Woolworth’s.

Sometimes called Hawaiian cheesecake salad, this dessert is similar to ambrosia. It differs, however, in that it often contains slices of kiwi, banana, and strawberry alongside the requisite canned fruit. Some recipes combine the fruit with cream cheese and pudding, while others prefer to use yogurt.

The key ingredient is Arborio rice, the same Italian variety used in risotto, which is combined with whipped cream, strawberries, pineapple chunks, mini marshmallows, and topped with maraschino cherries.

Similar to Snickers salad, this dessert leans even further away from its misleading moniker by incorporating whole cookies into its recipe. Especially popular in Minnesota, North Dakota, and Montana, cookie salad gets its creamy, fluffy texture by whipping together buttermilk and vanilla pudding then folding in Cool Whip.

Especially popular in Utah, Colorado, Idaho, or Wyoming, frog eye salad is technically a sweet pasta salad: The main ingredient is a tiny bead-shaped pasta called acini di pepe. Although the dish is a mainstay at Mormon-affiliated gatherings, frog eye salad has a long history at Lutheran potlucks, too. In this region of America, it’s also a must-have Thanksgiving side dish.

Food + DrinkThe Midwest Is the Home of the Casserole. These Are the Ones To Try
Tagged
Food + Drink Holidays United States
What did you think of this story?
Meh
Good
Awesome