Whether it is shredded, turned to custard or jelly, whipped into ice cream, or sprinkled onto a cookie, coconut holds a revered status in the realm of dessert. Nowhere is that more true than in Latin America and Southeast Asia.

Coconuts thrive in the tropical climes of Southeast Asia. They’ve been a life-saving source of sustenance in that part of the world for centuries, but it’s a beloved dessert, too. In Malaysia the coconut tree is called the “tree of a thousand uses.” In the Philippines, it’s known as the “tree of life.” Coconut cream is used to flavor sweet beverages layered with crushed ice (perfect for the region’s sweltering heat) in layered jellies, and ice cream. Pandan, an aromatic leafy green plant, is often pounded into a paste to add neon green hues and extra sweetness to coconut desserts. Meanwhile, in Latin America, coconuts are as common as clouds in the sky. Shredded coconut flavors cakes and is turned into candy and custard.

These are 15 coconut desserts worth trying as you travel the world. 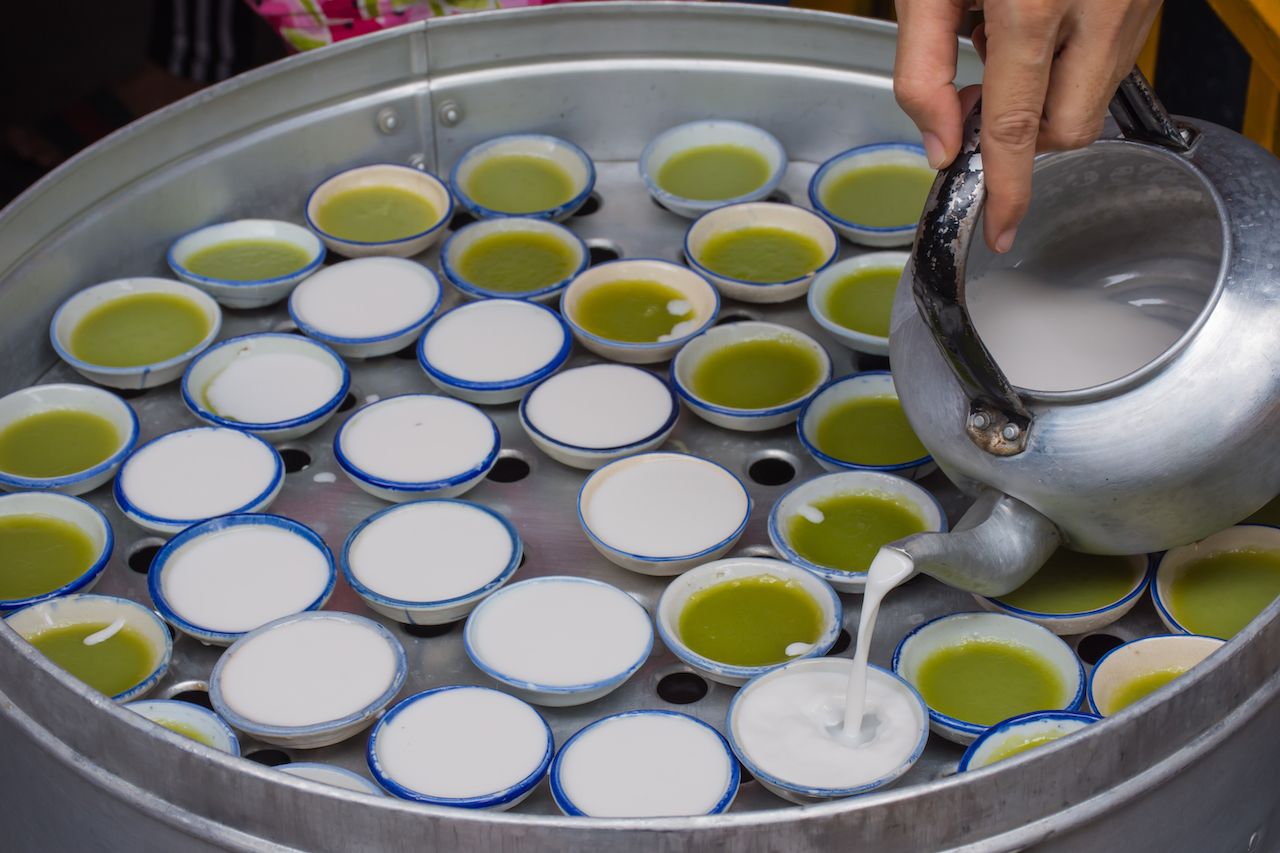 A popular street food in Bangkok, kanom tuay is a double-layered coconut milk custard. The bottom layer is made with palm sugar and sometimes flavored with pandan. It’s sweet and sticky, almost like a jelly or an eggless, custard-like flan. The top layer is creamy with a salty coconut flavor. Kanom tuay is always served in a small ceramic dish (tuay means cup). In Thailand, kanom tuay is often enjoyed after eating a hearty bowl of noodles.

2. Buko pandan from the Philippines 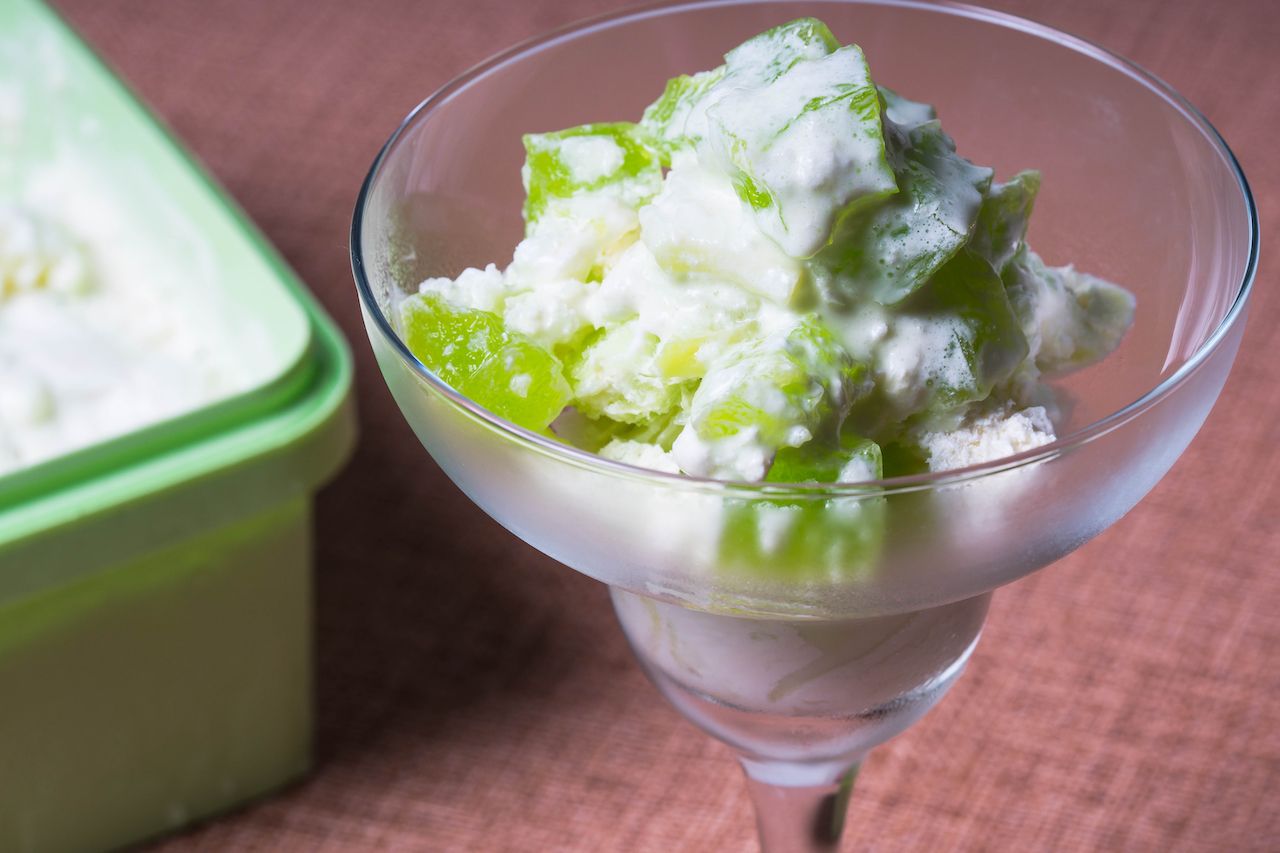 This classic dessert from the Philippines is a sweet salad. Green pandan jelly cubes float in a mixture of shredded coconut, tropical fruit, and sweet coconut cream or sweetened condensed milk (buko means coconut in Tagalog). Buko pandan is typically served during a Filippino salu-salo, a dinner party or gathering among friends, and is especially popular around Christmas. Buko pandan is a version of samalamig, which are sweet beverages featuring jelly ingredients. 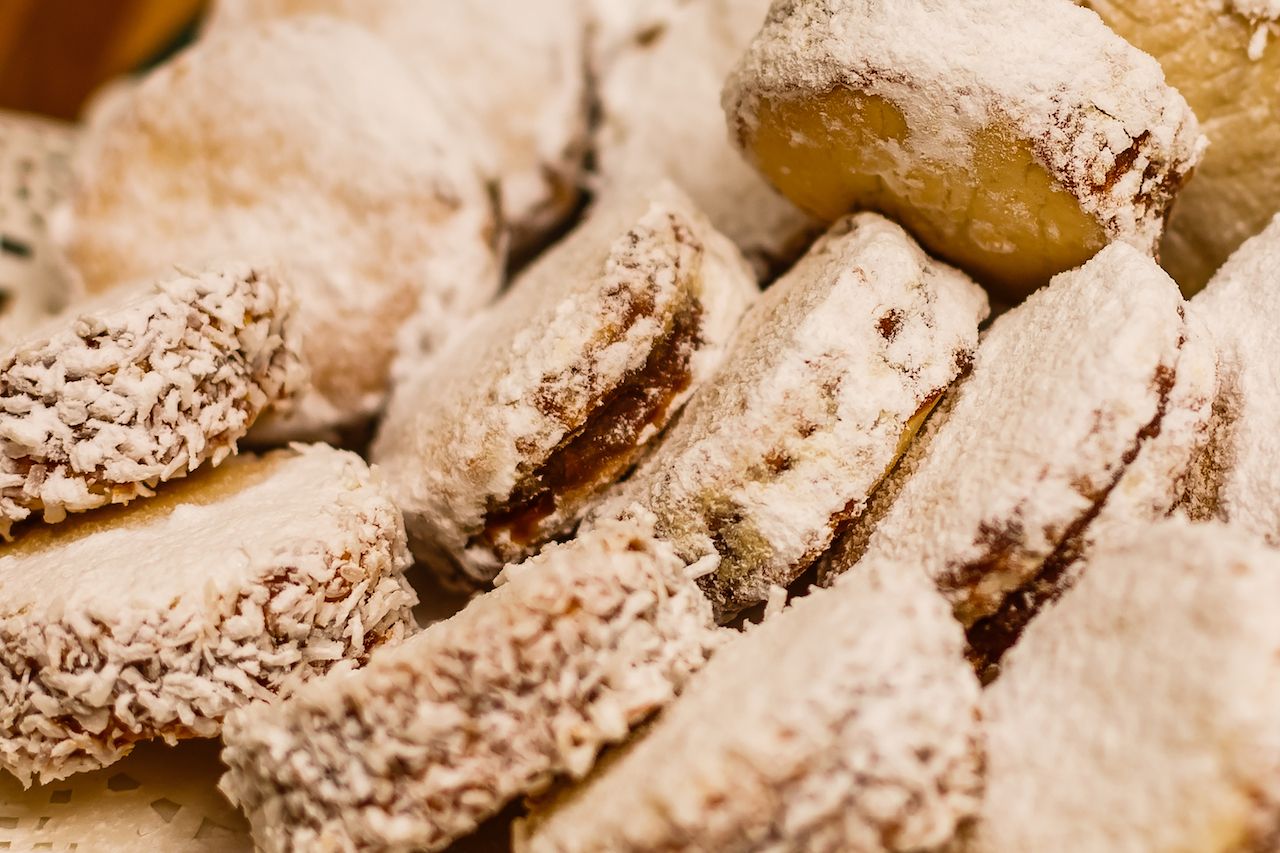 These butter cookies are popular throughout South America and are both made at home and sold in supermarkets. Two cookies sandwich a layer of creamy dulce de leche filling, which is then topped with powdered sugar and rolled in coconut or dipped in chocolate. The name for this cookie probably comes from the Arabic word al-hasú, which means “filled.” In 711, the group then known as the Moors (North African Muslims) occupied Spain, bringing the maamoul, a cookie filled with date paste, to the Iberian Peninsula. The Spanish adapted the recipe, adding honey and almonds. When Spain began its own campaign of colonization, the Spanish introduced South America to the alfajor, where it again evolved to incorporate dulce de leche. 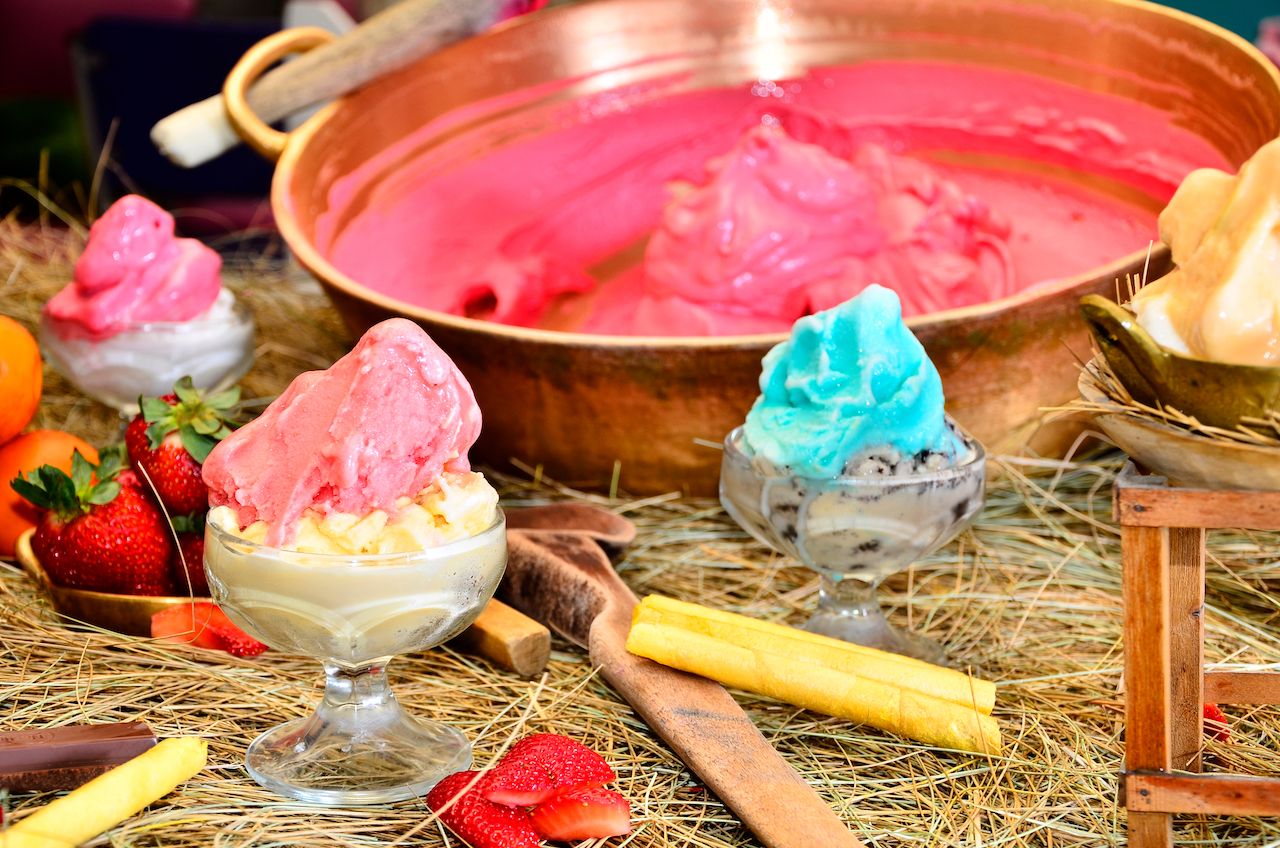 This sorbet-style frozen treat is made from fruit, ice, and water. It’s made in the paila, a shallow, wide metal pan used to cook throughout South America. The process involves several steps: First, salt and ice must be packed around the paila to keep it cold. Then, fruit blended with a touch of sugar is poured into the paila itself. Then comes the arduous process of combining the ingredients with a wooden spatula or spoon until the mixture is thick, smooth, and creamy. One of the most popular flavors is coconut.

This square coconut jelly dessert uses agar agar (a colorless, tasteless jelly-like substance extracted from red algae that’s popular throughout Asia as a gelatin substitute) rather than gelatin to achieve its signature texture. As the jelly sets, it separates into two elegant layers, one opaque coconut layer on the top, and on the bottom a transparent water layer. The coconut flavor is mild and refreshing, reminiscent of coconut water in solid form. 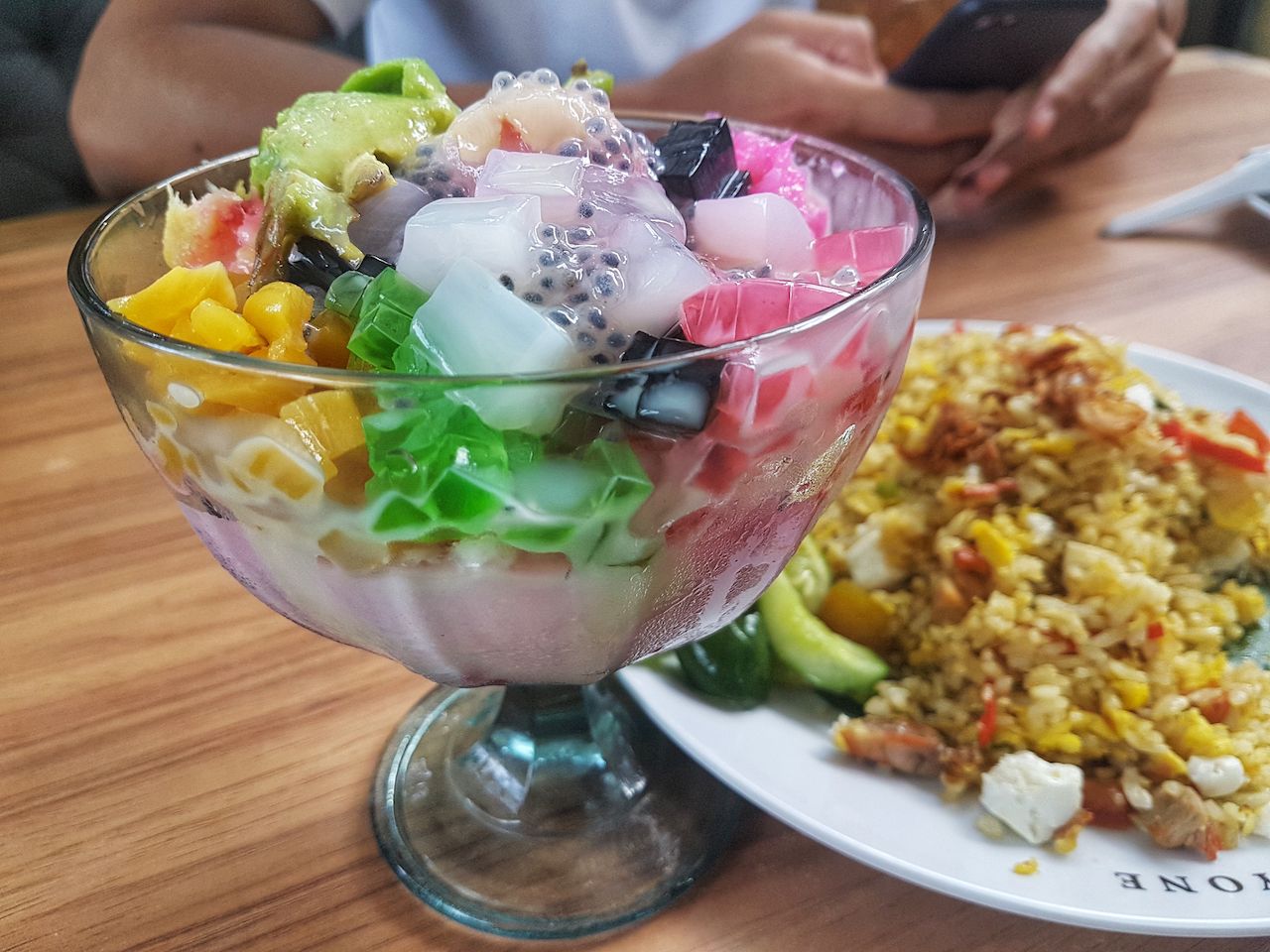 This Indonesian fruit cocktail could also be considered a beverage. The refreshing concoction combines chopped jackfruit, coconut meat (not shredded, dried coconut), and avocado in a dish filled with ice, coconut milk, and sweetened condensed milk. According to one story, es teler originated in Jakarta, where the idea for the drink came to its creator in a dream. It’s considered Indonesia’s national beverage. 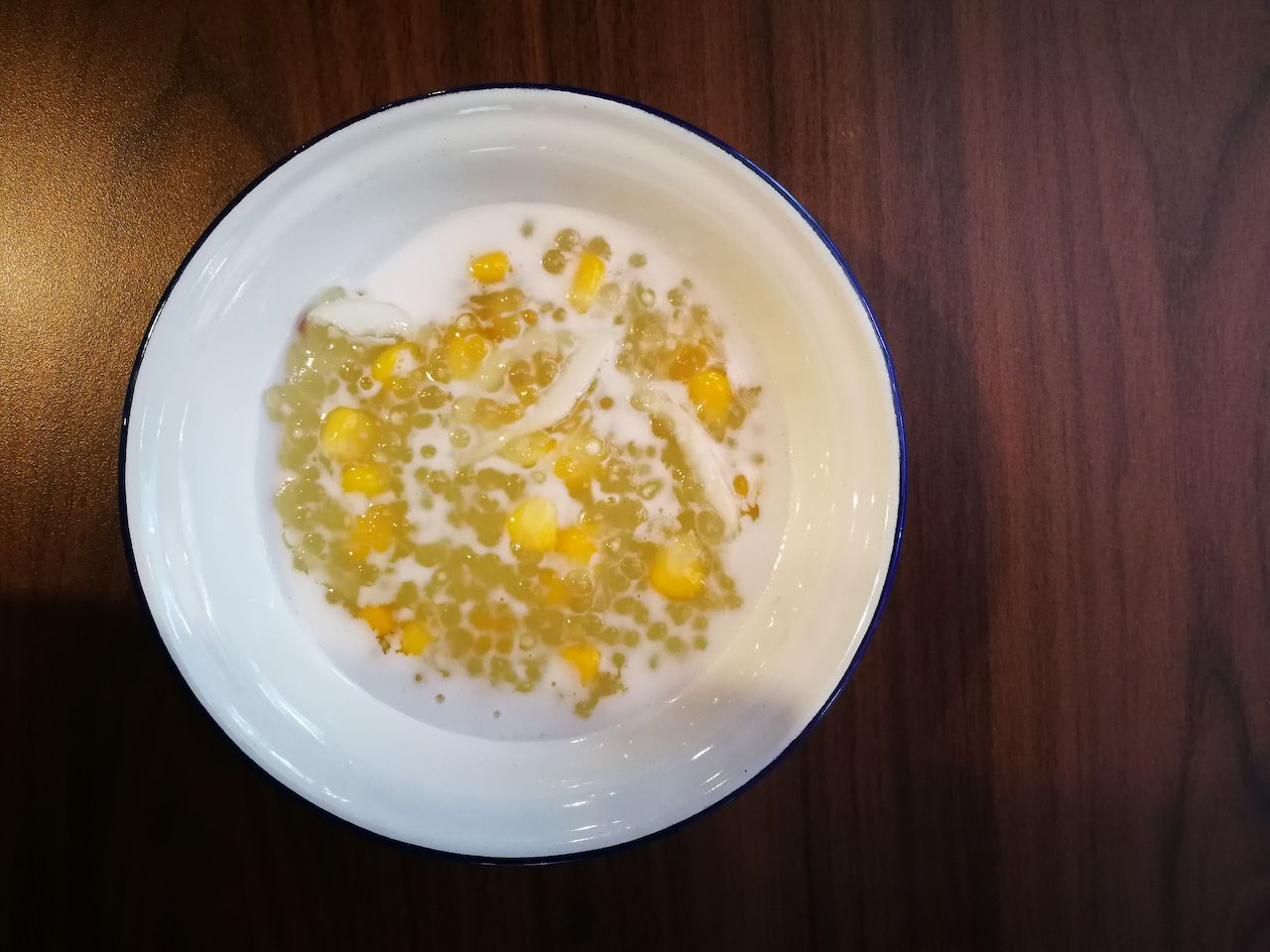 Chè bắp is a sweet corn pudding. Sweet corn is combined with tapioca pearls to thicken the pudding and add a chewy texture, and it’s then cooked in creamy coconut milk. Some varieties of chè (the general term for Vietnamese sweet beverages or puddings) also incorporate fruit like jackfruit and durian, or ingredients like mung beans, pandan, or sesame seeds. Though chè bắp is easy to make at home, it’s often sold in plastic cups at Vietnamese grocery stores. 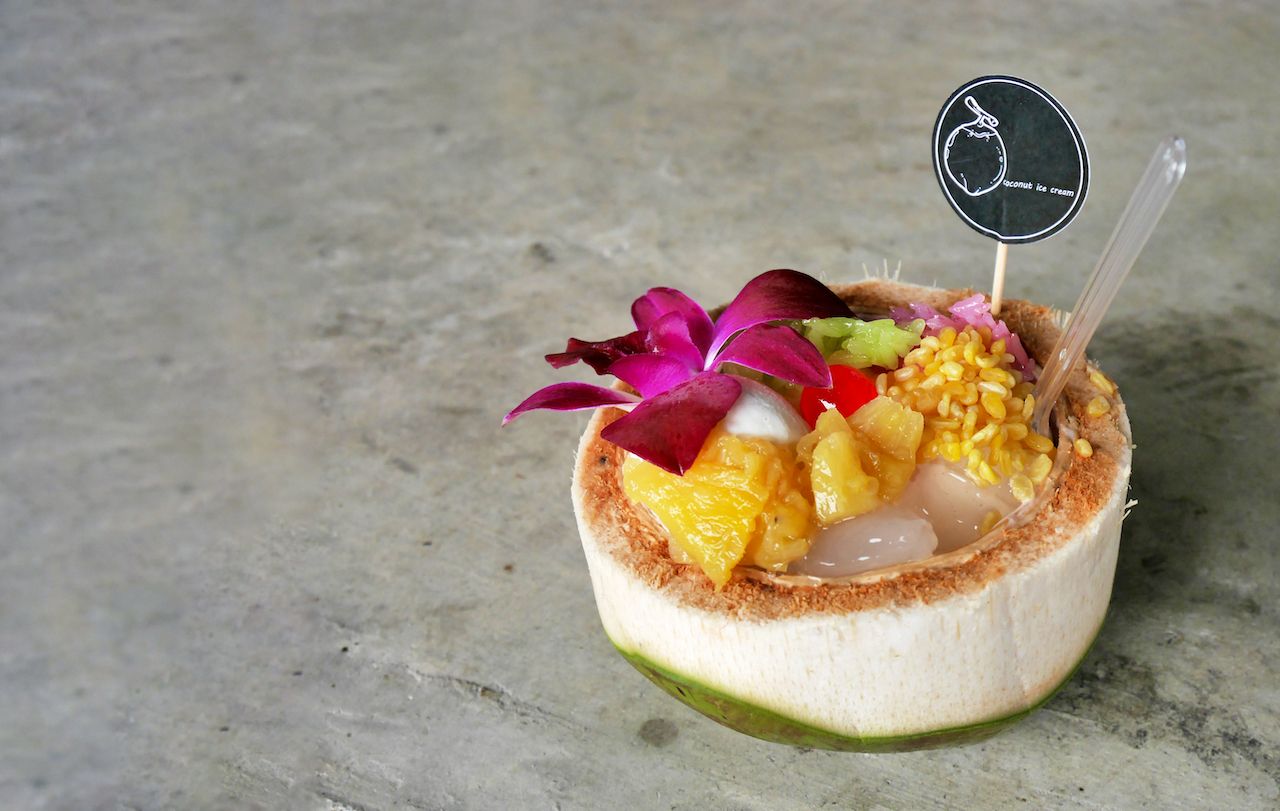 This Thai coconut ice cream is sold from roving street vendors throughout the country. It’s served inside half a coconut, and you’ll hear the vendors coming from the sound of the tinkling bell attached to the car). Itim kati can be customized with toppings. The most popular options include peanuts, sliced mango, and sticky rice, which adds a slightly savory note. Some street vendors even sell creamy coconut ice cream between slices of bread. 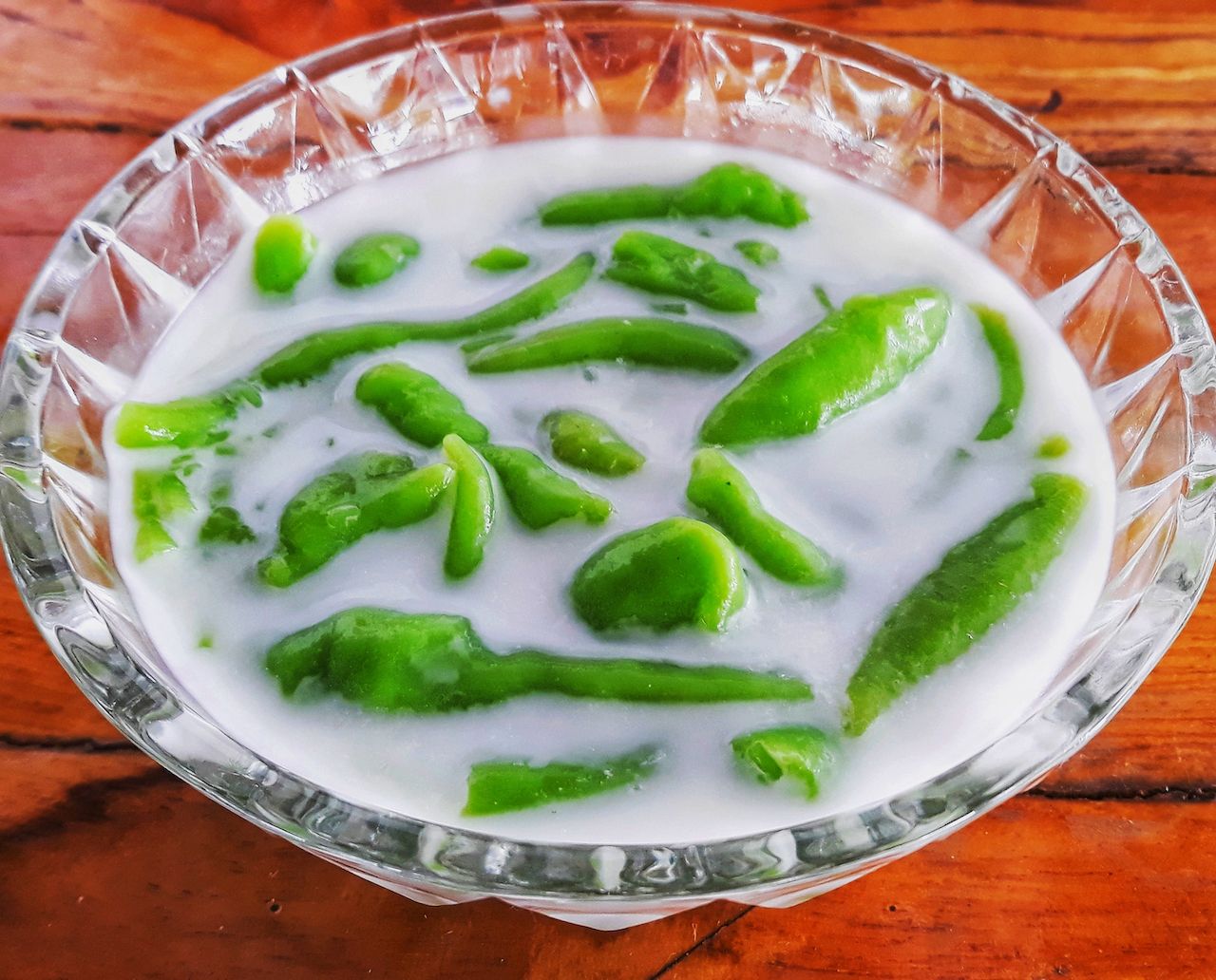 Pandan imparts the noodles in lod chong with an electric green color. The name of this dessert comes from the process by which its made. Lod chong translates to “escaping through the holes.” The liquid custard — made from rice flour, mung bean flour, and water — is pushed through small holes to create the long noodles, similar to spaghetti. The noodles have no taste and simply add a jelly texture. The noodles swim in a sweet syrup made from coconut cream and palm sugar poured over ice.

Lod chong is often served after a spicy meal. The dessert can also be found at street vendors, which will sometimes serve the coconut syrup and noodles and crushed ice in separate plastic bags, requiring the customers to combine the ingredients themselves. Versions of lod chong, often called cendol, are popular in Indonesia, Vietnam, and Cambodia.

10. Bien me sabe from Venezuela

Similar to a tres leches cake, bien me sabe (“tastes good to me”) is also known as coconut cream cake. The moist, yellow cake is made with layers of coconut cream, a meringue topping, and has a sprinkling of dried, shredded coconut. Ladyfingers are also often used instead of yellow cake. It should be chilled overnight to give the coconut custard a chance to set. A version flavored with almonds is popular in the Canary Islands. The cake is likely an import from Spain; in Andalusia you can still find a variety made by nuns.

This rice pudding flavored with coconut milk and spices like nutmeg and cloves is one of the most popular desserts in Puerto Rico. Traditionally, tembleque is served during the holidays, in particular on New Year’s Day and Christmas. The word tembleque refers to an object that jiggles, hence this jelly or custard-like dessert’s name. 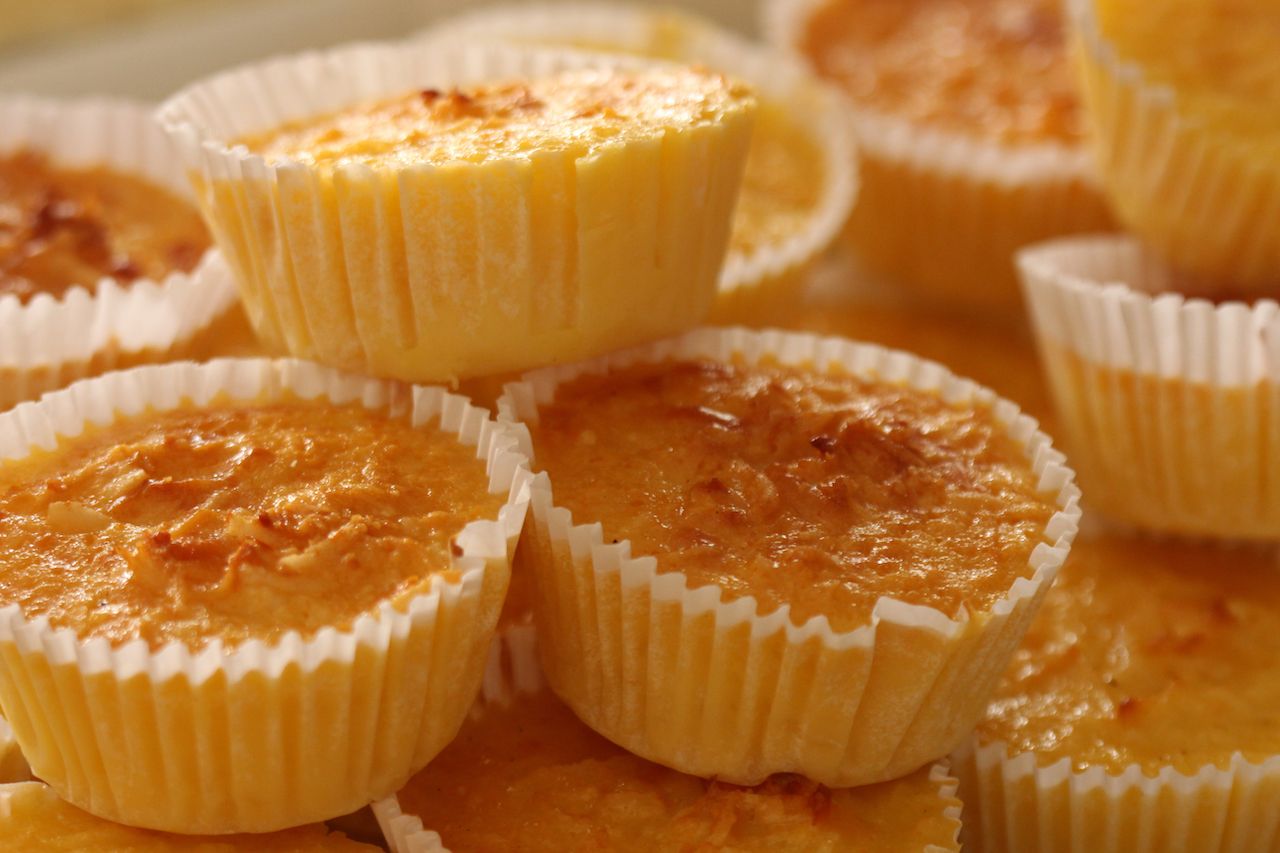 These so-called “coconut muffins” originated in Portugal but are now most popular in Brazil. Once the treat took root in Brazil, slaves likely added coconut to the recipe. Though the outside of the queijadinha<.em> is firm, the inside has a looser, pudding-like texture from the parmesan cheese, coconut, and condensed milk filling. The dessert is especially popular in the Northern region of Brazil. 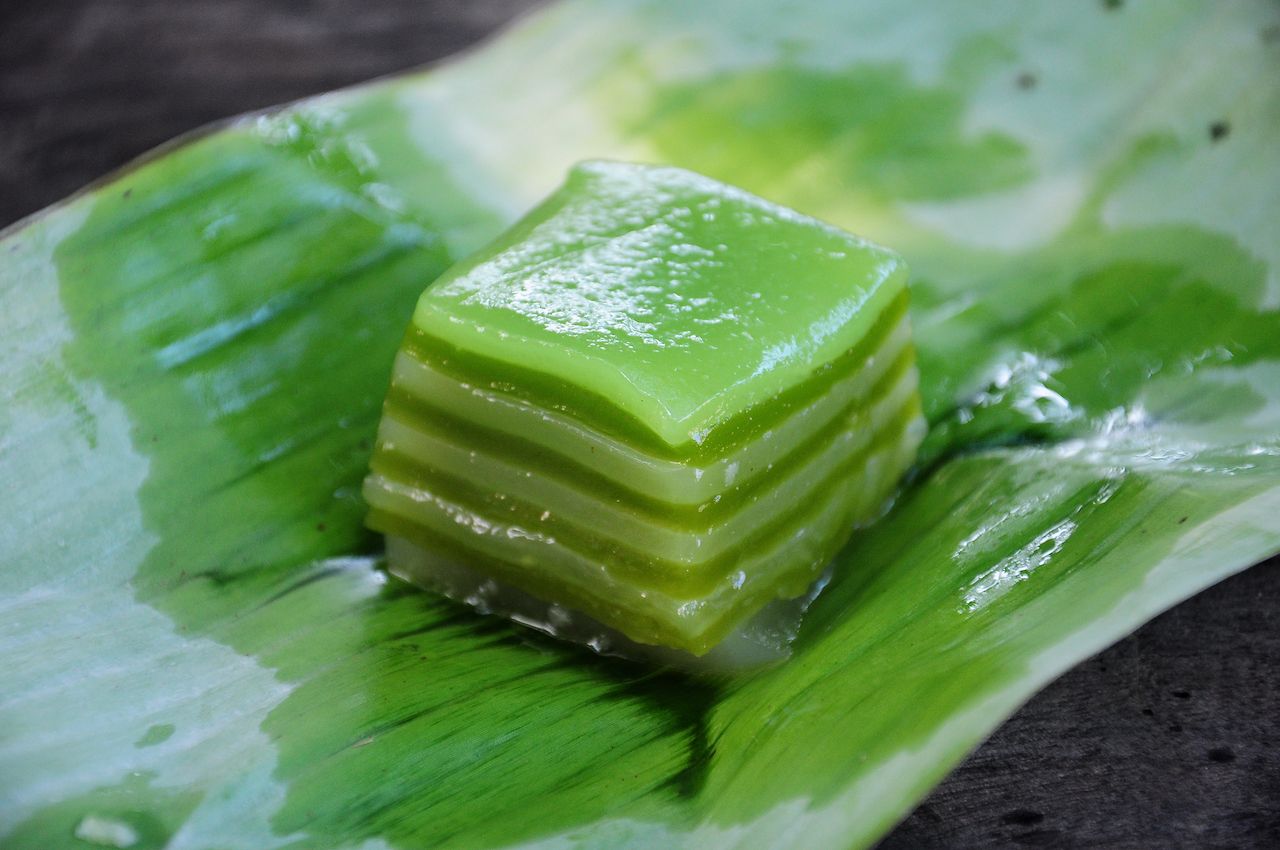 This Thai cake has nine layers, as the number signifies luck, prosperity, and progress in Thailand. It’s often served at weddings, birthdays, graduations, and other auspicious occasions. The cake has the consistency of jelly, but coconut cream and coconut milk give it a silky, creamy texture. The signature of khanom chan has even led some to nickname it Thai jello. The mild flavor makes this little coconut and pandan square the perfect palate cleanser after a spicy meal. 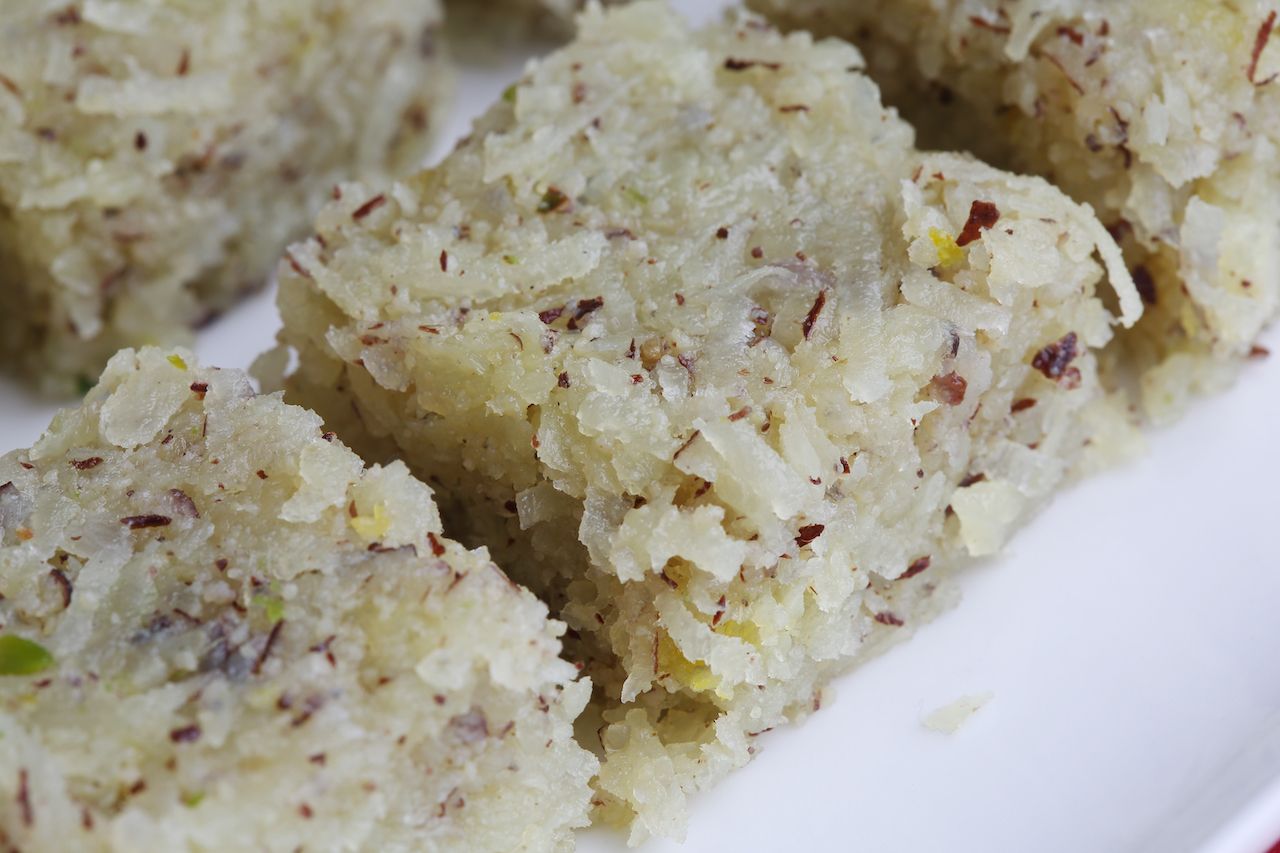 These bite-sized coconut rectangles are a popular dessert in India and have a texture similar to fudge. Instead of chocolate, however, coconut burfi is made with milk and sugar, then flavored with cardamom. The texture shouldn’t be sticky but more like a firm, chewy cookie. Coconut burfi is a popular treat to serve at celebrations like Diwali. On such special occasions, burfi is often topped with edible silver leaf. The name for this dessert might derive from the Persian word barf, which means “snow,” due to the fact that the primary ingredient is shredded coconut.

This simple dessert, also known as coconut candy in Cuba, consists of shredded coconut soaked in coconut syrup. The grated coconut is cooked in milk and sugar until a sticky, gooey mass of coconut forms. It can easily be eaten with a spoon, but it is also often separated into smaller, individual bite-sized pieces or rolled into balls. In Cuba, it’s served alongside cheese, cookies, and bread.

DessertWhy Southeast Asia’s Best Desserts Are Bright Green
Tagged
Dessert
What did you think of this story?
Meh
Good
Awesome