Burning Man was held again this year from August 28th to September 5th, drawing nearly 80,000 enthusiastic participants to the Black Rock Desert north of Reno, Nevada. With even hotter than usual daytime temperatures, the Burning Man 2022 felt more nocturnal than ever. Still, it was very worth it to get out during the day — since the artwork this year was off the charts. With a pandemic-induced hiatus after the 2019 event, artists had three years to produce some truly inspired works. This is some of the best art from Burning Man 2022. 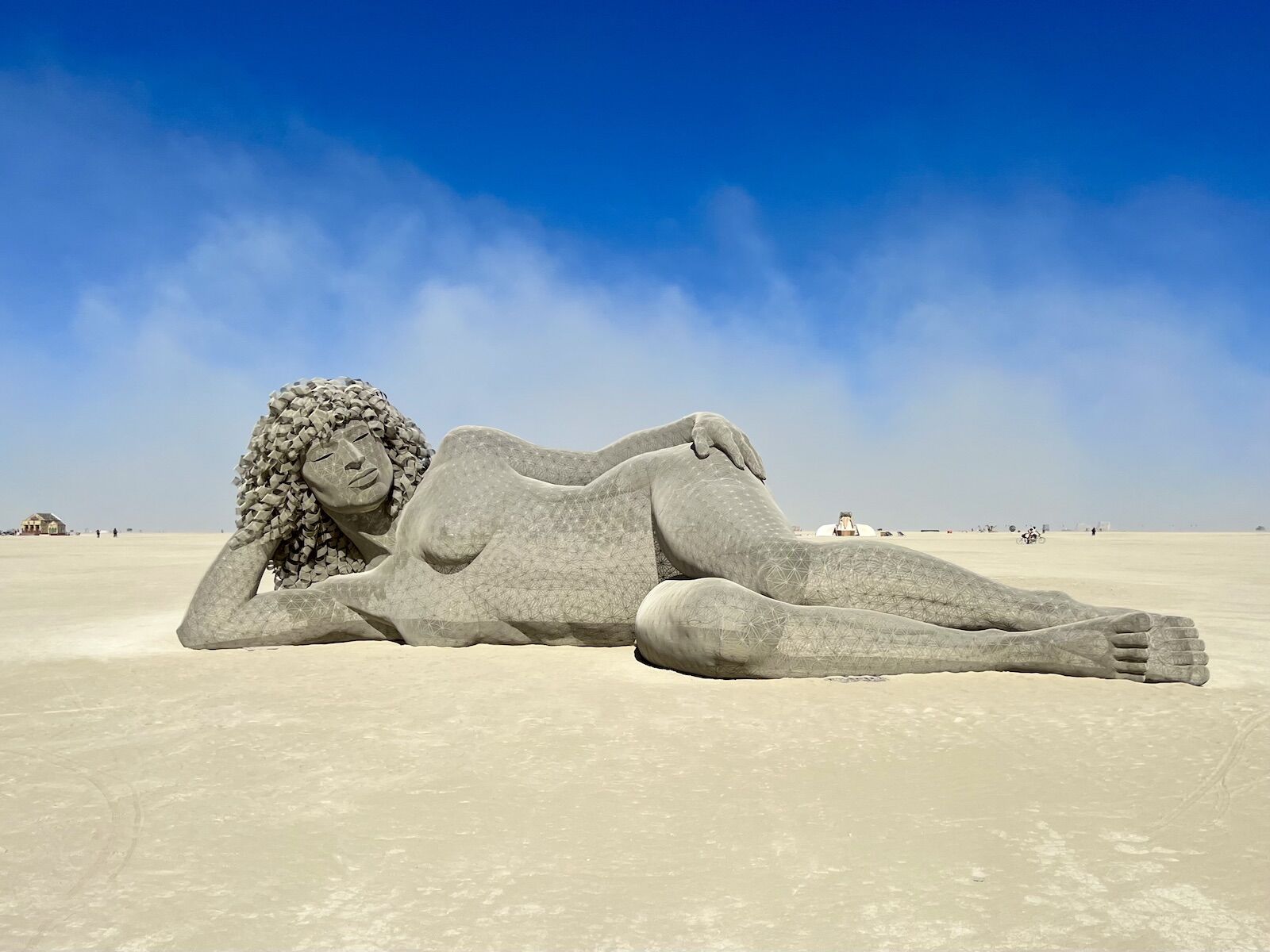 Artist Marco Cochrane became one of the best-known names at Black Rock City, as the temporary metropolis is called, with his 40-foot-tall metal sculpture of a woman entitled Bliss Dance, which debuted in 2010. This was followed in later years by other equally massive stunning sculptures of women: Truth is Beauty and E-Revolution. For Burning Man 2022, Gaia takes a different tack. Conceived by and modeled on his former partner Julia Whitelaw Cortell, Gaia lies stretched out across the desert dust, inviting you to take a closer look at the stunning metal work and to admire Cochrane’s remarkable sculpting skills. 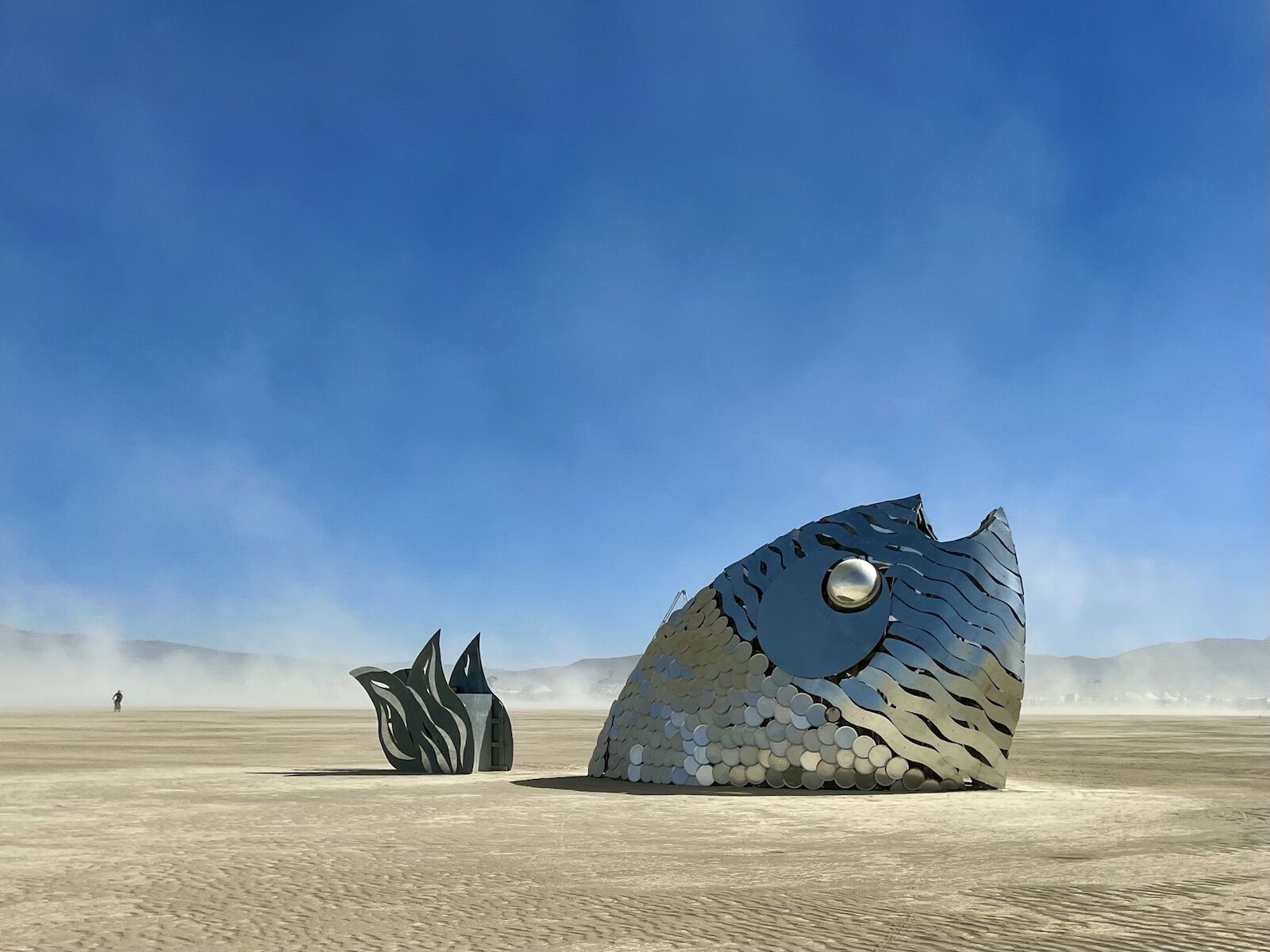 Puerto Rico artist NiNo created ATABEY to bring attention to the environmental challenges of his home island. Made with repurposed metal, including silver serving trays, Atabey is considered “the ancestral mother of the Taino Indigenous people of Puerto Rico,” according to NiNo’s inscription, who was “worshiped as a goddess of fresh water and who represents the Earth Spirit.” ATABEY glistens in the sun as she emerges from the dust of the Playa, as the central area of Black Rock City is called. By night, she glimmers in solar-powered light.

Much of the art at Burning Man is temporary, purposely so. The wooden temple is burned every year the day after the Man burns, and several other pieces are burned even earlier in the week. Other artworks will be deconstructed to take home, and will remain that way. The most temporary art of all this year was also some of the most breathtaking: a nightly drone show. A thousand lighted drones made everything from a 100-foot replica of The Man to a face fashioned after a Venetian mask to a flying bird to an hour glass that fills, flips over, empties, flips over, and fills again. The huge show in the sky above the western side of Black Rock City was mesmerizing. 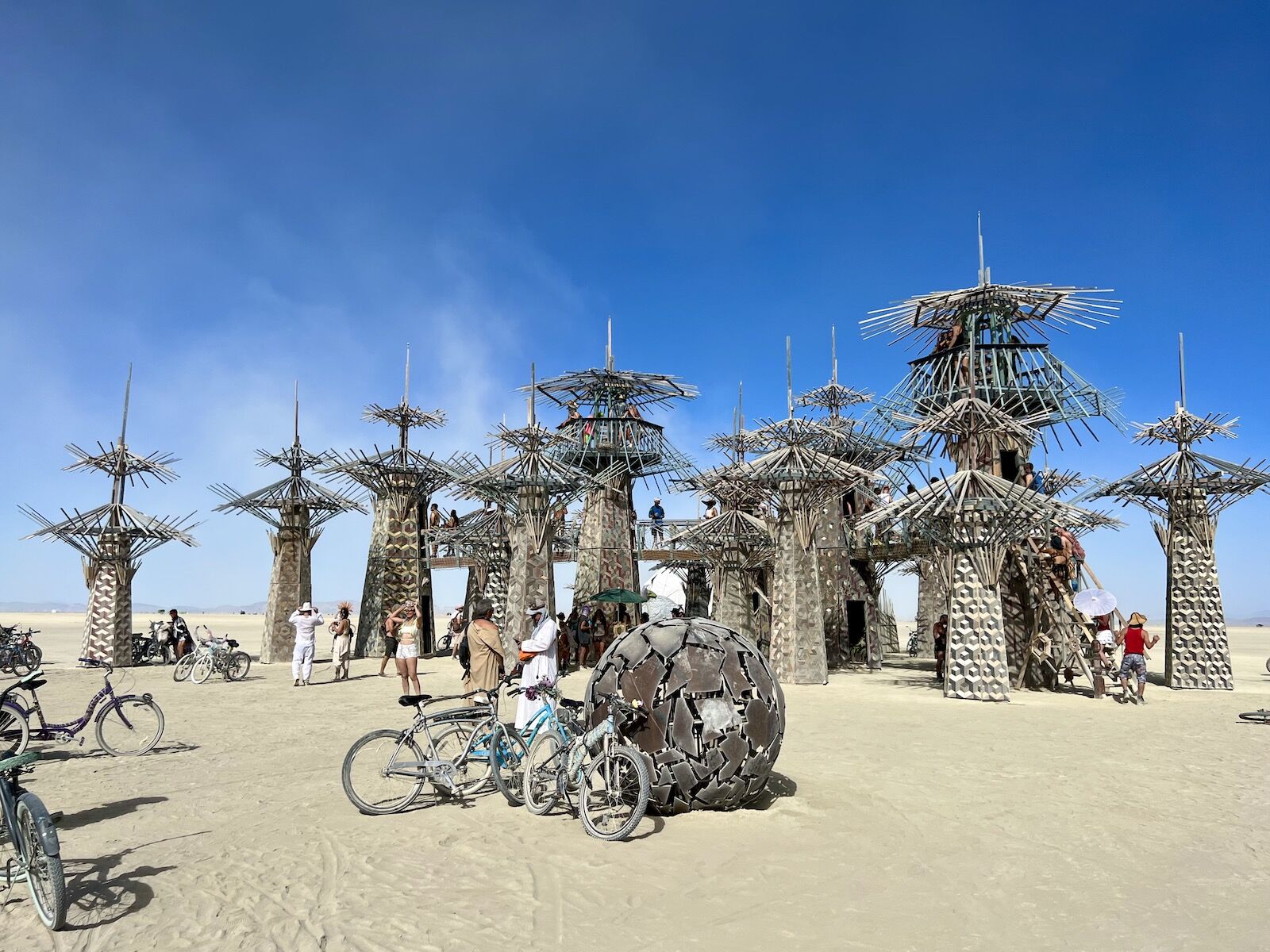 Paradisium is a reimagined grove of trees by Dave Keane & Folly Builders, created with reclaimed wood and from trees that were burned in Northern California’s 2020 CZU Lighting Complex Fire. Beyond being a striking work whether in bright sunshine, eerie dust storm, or by night-time lighting, Paradisium is endlessly entertaining to explore — with bridges connecting the geometric trees, interior structure to climb within each tree, and creative surprises inside them. 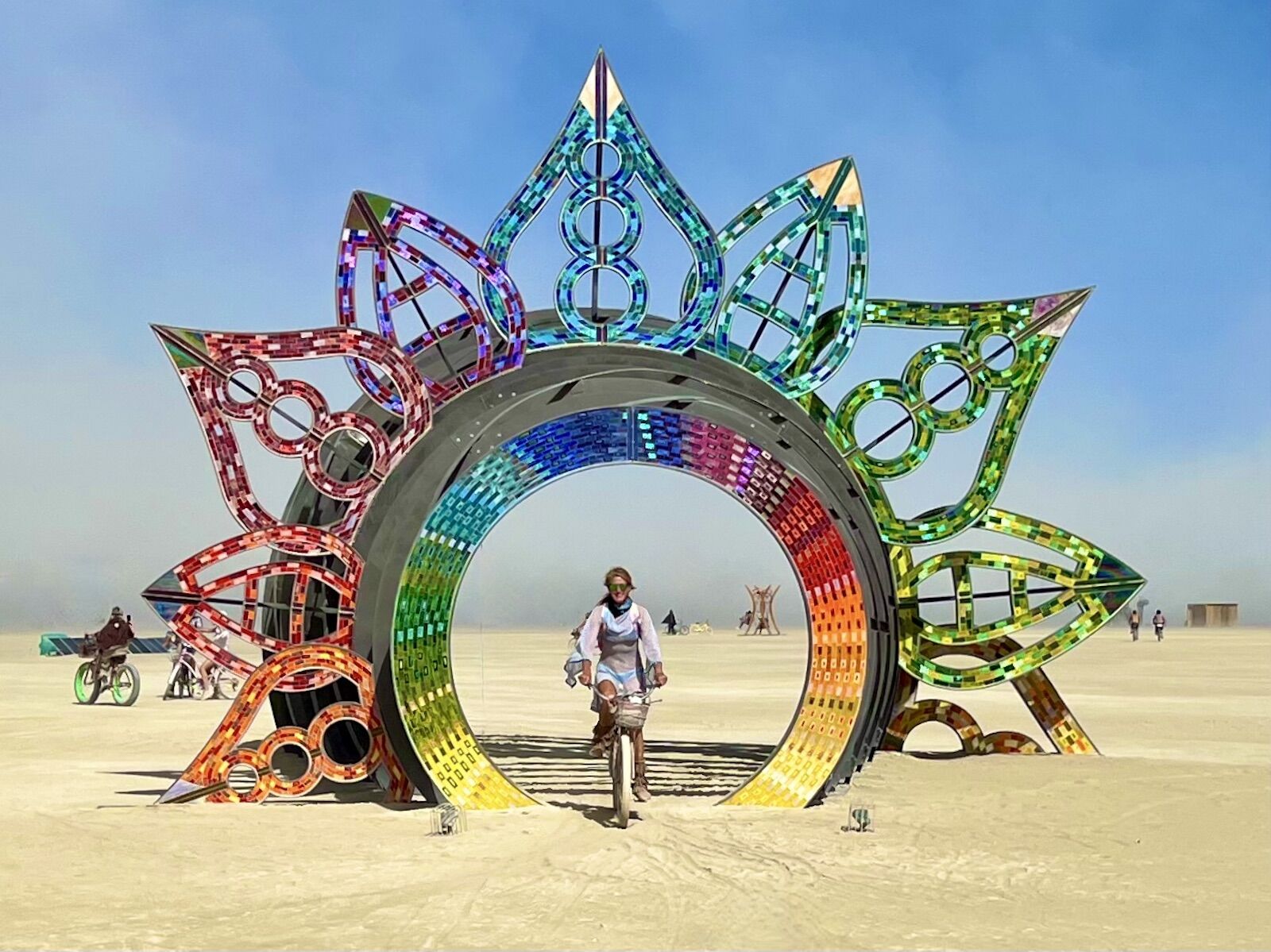 This year’s Burning Man theme was “Waking Dreams,” and this Petaled Portal by David Oliver may symbolize a passageway between our conscious thoughts and those of our dreams. Whatever its purpose, it is stunning, particularly as you look up close and realize it’s a mesmerizing mosaic of beautiful colored glass.

Unbound: A Library in Transition 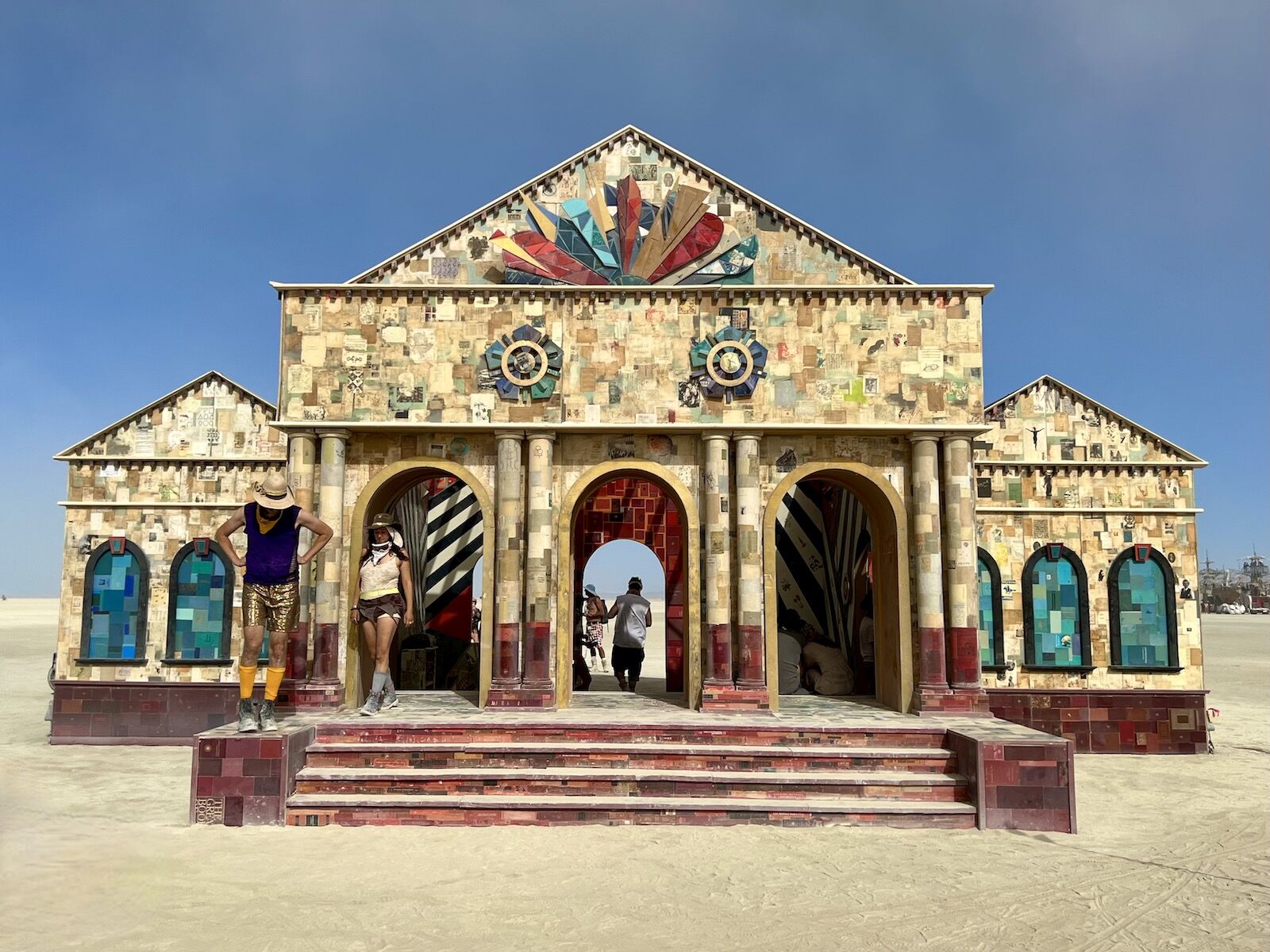 Inspired by grand, neoclassical architecture, this work by Julia Nelson-Gal rethinks your typical main library — incorporating the books themselves into the exterior and interior walls. As you approach it, you notice that the outside is completely plastered in book pages, while the inside combines them with geometric shapes. A hanging globe within a decorative swirl replaces the traditional chandelier, while atlases are there for your perusal. The whole creation invites you to think about literature, learning, and how the mediums for these endeavors are in constant flux. 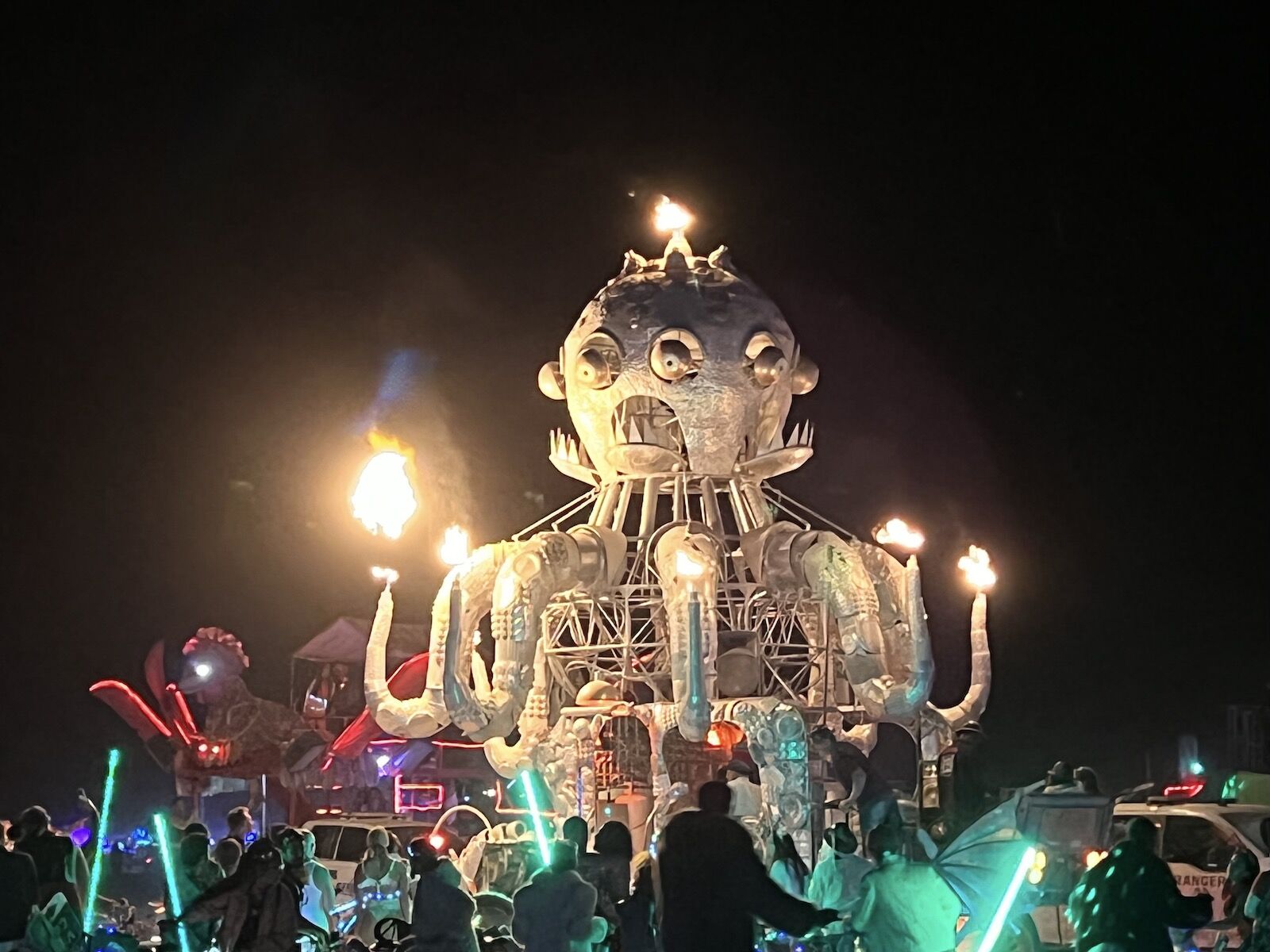 El Pulpo Mecanico, or The Mechanical Octopus, by artist Duane Flatmo had been a beloved part of Burning Man for several years. Technically, it was a mutant vehicle, as registered with Burning Man’s Department of Mutant Vehicles, as opposed to being registered with Burning Man’s ARTery, which deals with its works of art. El Pulpo Mecanico has since been sold to someone in Texas and, in its place Flatmo created a larger, lighter, and more magnificent mechanical, fire-spewing, multi-eyed sea creature — El Pulpo Magnifico, The Magnificent Octopus. 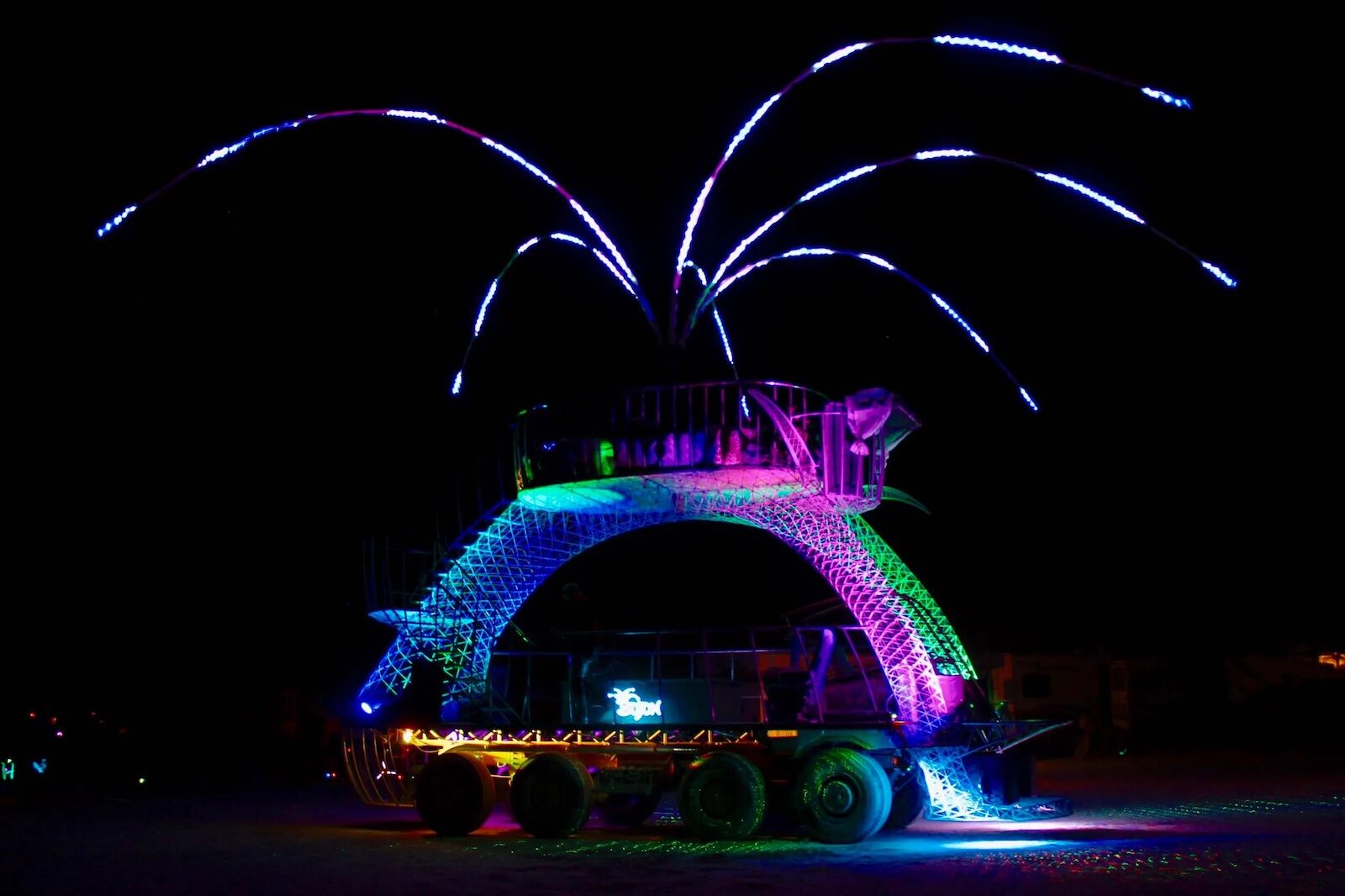 Sil-vi debuted in 2010, and has retained a reputation as one of the most beautiful art cars at Burning Man. Designed by Marco Cochrane, and put together with effort from multiple members of Camp Bojon, Sil-vi is unlike nearly every other Burning Man art car in that it is not trying to look like something else. Art cars can be spectacular or cute — looking like this year’s dragon with moving wings, a Western saloon complete with an 1800s bar inside, or a petite, glowing swirl of “Chosen Yogurt.” But Sil-vi, with multicolored and changing LED plumes swaying in the breeze and DJs spinning tunes, is simply beautiful in her own, abstract right.

TravelSex and Burning Man: Everything You Need To Know
Tagged
Art + Architecture Events Festivals Nevada, United States
What did you think of this story?
Meh
Good
Awesome

The Best Art From This Year’s Burning Man
Alex Honnold ‘Peer Pressures’ Norwegian Climber Into Free Soloing With Him on Wild Rock Face
7 Vintage Train Rides in the US That Will Take You Where No Cars Can Go
Airbnb Launched a Tiny Homes Category, and We’re Already Planning Trips Around These 11
Don’t Hit the Road Without Reading This Perfect Las Vegas To Zion Itinerary