My first December in Barcelona, when I lived there a few years back, I noticed something odd amidst the winter holiday displays: small logs with smiley faces, tiny wooden legs, and little red capes. I also heard whisperings of a “Caga Tió,” which sounded like an insult about a family member — given that “tío” in Spanish means uncle and “caga” translates to “poop”.

I soon learned that these two things are related and have nothing to do with disagreeable relatives. In fact, Caga Tió means “Pooping Log” in Catalan, the official language of Barcelona and the entire state of Catalonia. In early December, families in Catalonia and neighboring Aragon place one of these grinning chunks of wood by the fireplace — or another prominent spot at home — and (pretend) feed it nightly so it can defecate little gifts on Christmas Eve. 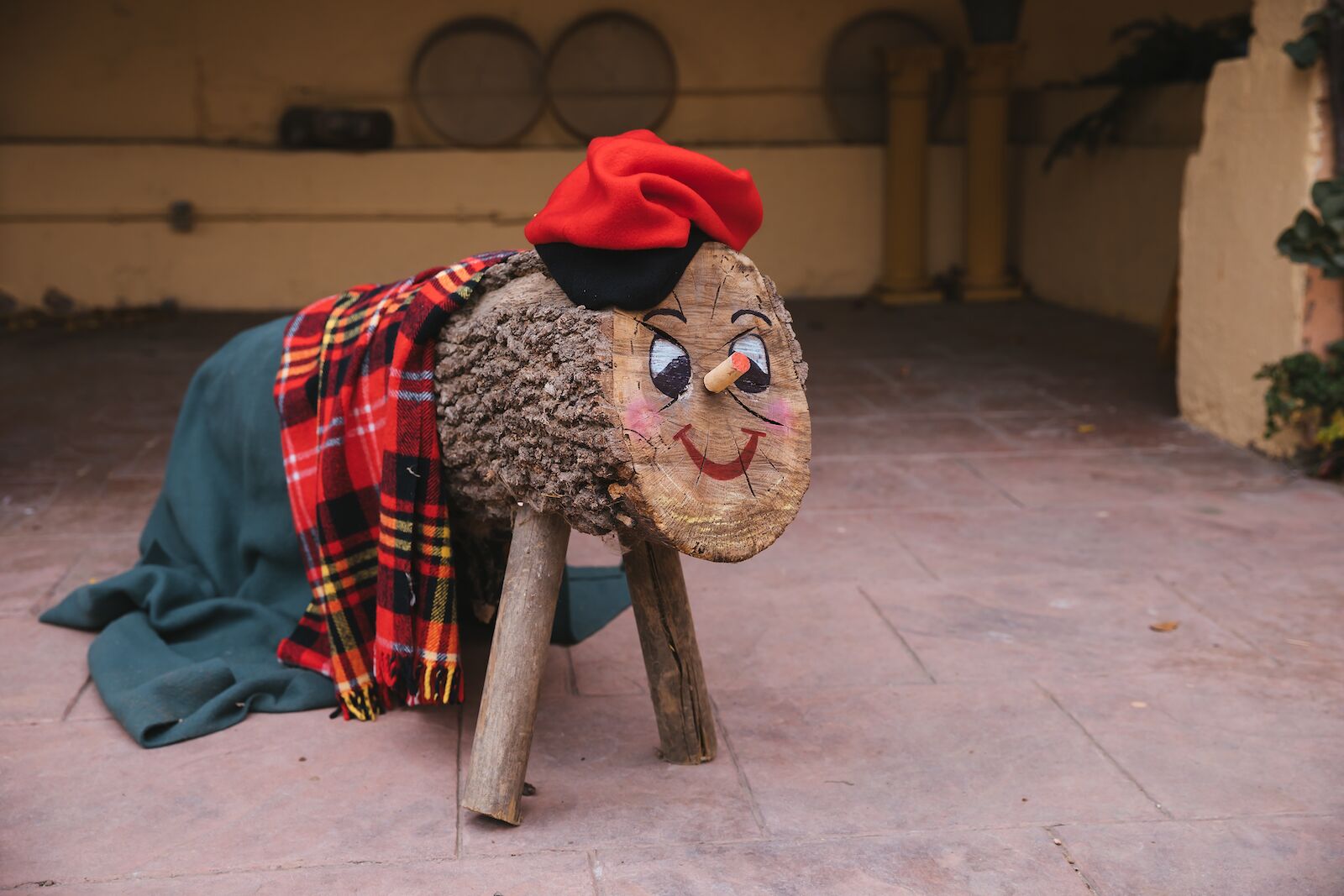 “You give it something to eat every night, and it is gone in the morning,” Barcelona mother Monica Vallejo explains. Vallejo says she and her kids would give the log leftovers from dinner or whatever was around.

She says some families go further, to ensure their little wooden trunk will actually be able to do the doo doo. Vallejo says these nutrition-oriented types might give their ligneous log fiber-rich foods like “garbanzos and lentils, so it can poop more presents.”

Vallejo is the owner and general manager of Hostel Grau, an eco-friendly boutique hotel in Barcelona, where she keeps a Caga Tió — also called the Tió de Nadal, or Christmas Log — in December as well. She says holiday guests at the hotel find the tradition “cute and strange. They don’t understand it.” Given that, as Vallejo herself concedes, “There’s no ‘why,’ there’s no reason” for the pooping log, her foreign guests’ confusion is understandable.

The origins of Caga Tió 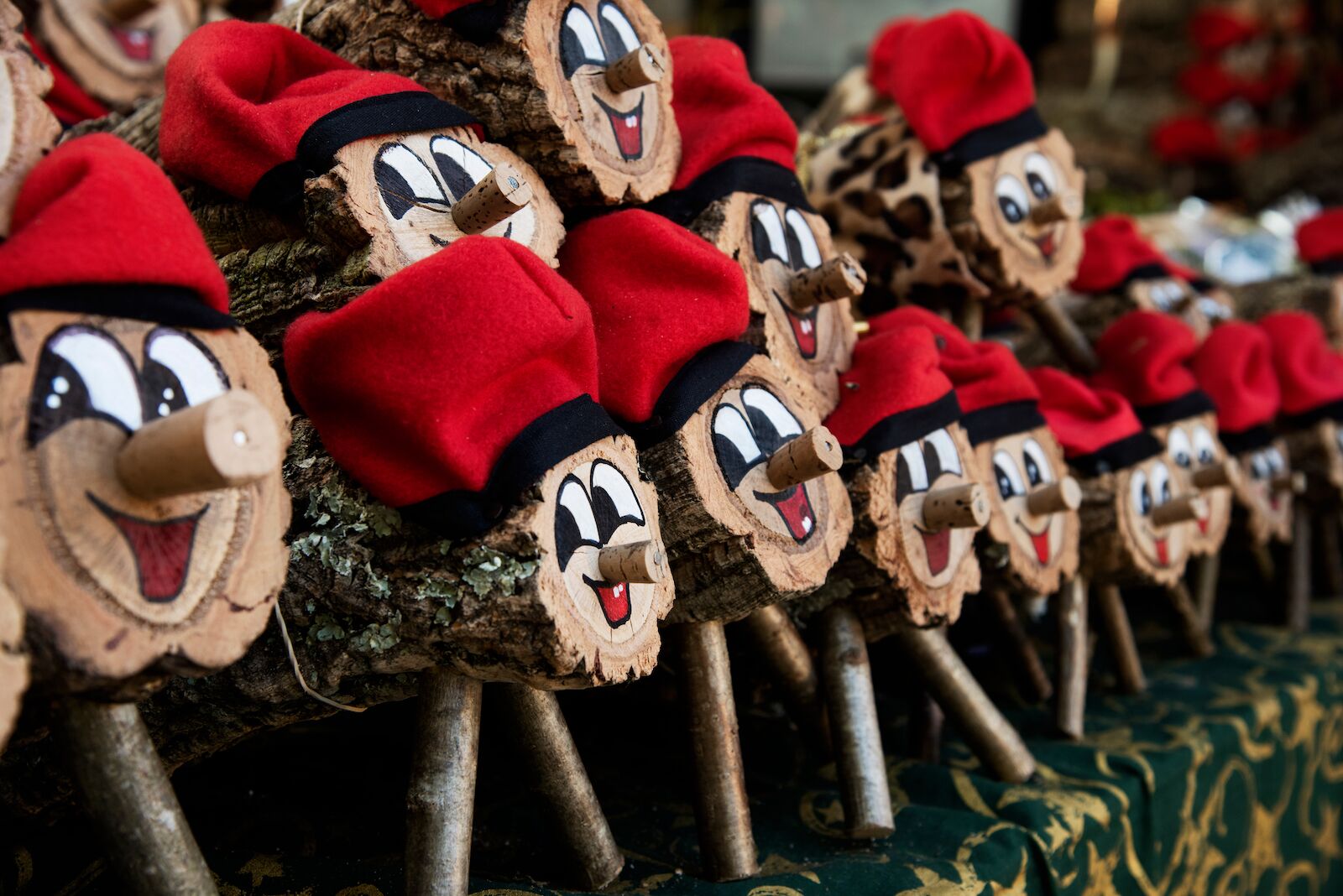 As Vallejo explains, the practice originated in the countryside. There, families burned a special log over the holidays, representing light and togetherness. Once it was gone, they spread its ashes in the fields, in a symbol of fertility and regrowth. Somehow that growth translated into a log that gets fattened up for two weeks in December, until it finally has to have a movement, in a tradition that seeped into Catalonian cities in the 1960s.

Although you could purchase one of these smiling chunks of timber in a store or market, Vallejo says the best place for parents with young kids to get one is where logs come from: the woods.

The annual search for the hidden logs is known in Catalan simply as the Caçations, the Hunts. Parents can take their kids to a special Caga Tió forest run by a small business where they’ve been hidden for the children to find, as with a treasure hunt. Small towns in Catalonia offer options to find Caga Tiós in their woods — to those who have prepaid about $35 — and encourage families to stay afterwards to enjoy a long family lunch at a designated restaurant.

At the forest Vallejo took her boys to, the logs are already decorated with eyes, legs, and capes. For her, the forest search is the best part of the Caga Tió tradition, as that tooting tree trunk will belong to your family for many holiday seasons to come.

Once they have the Caga Tió at home and being “fed” each evening, “… kids actually think it’s getting bigger,” Vallejo says. By the 24th of December, the Caga Tió is “gordito,” or chubby, and ready to go number two. But the little piece of wood needs some privacy to do its thing.

In religious families, kids are told to head into the bedroom to pray for gifts. Vallejo’s family is not religious, so she used to tell her two boys that the Caga Tió was shy and they needed to wait in another room for a while. When the kids leave the room, parents stash goodies under the log’s “cape,” which can look more like a blanket.

When the kids return, the weirdness continues: The children have to encourage the Caga Tió to expel the presents by hitting it with a stick. “It sounds aggressive, but it’s gentle. The kids don’t hit hard. You stimulate it to go poop,” says Vallejo.

“You can be four kids at once hitting it,” recalls Hugo Vallès Wang, now a college student, of having a Caga Tió in his preschool classes. “Little kids can’t hit it that hard. It’s more about the tradition and singing the song.”

The song has kids asking the Caga Tió to poop out nuts and turrón, a sticky-sweet nougat that’s popular throughout Spain over the holidays, and specifically not to poop out salty fish. In fact, that’s pretty much all they get for their efforts: candies.

Pooping log
almonds and nougats
If you won’t poop, I’ll hit you with the stick

“The presents are small things, like sweets. It’s not a Sony Playstation,” says Vallejo. The bigger presents are given on January 6, which is celebrated in Catalonia and throughout Spain as the day of Los Reyes Magos, or Three Kings Day.

It’s just as well there aren’t any Play Stations, since the Caga Tió is strictly for small kids. Vallejo says that while most kids can believe in Santa Claus or the Three Kings until they are eight years old, that’s not the case with the Caga Tió. By age four, they have a hard time accepting that a sawed tree trunk can expel presents from its backside.

“When they are two or three years old, it’s like magic. When they are four years old, it’s complicated,” says Vallejo. By the time he was five, Vallejo’s older son, Jon Pol, who’s now 15, didn’t get why they had to keep leaving the room to get more gifts. Or why a log would poop at all.

“It’s ridiculous,” laughed Hugo Vallès, as he tried to recall if he ever believed in the Caga Tió. It’s possible he didn’t, since only his grandfather was Catalan, with his other grandparents hailing from southern Spain, Japan, and China. So even though he was born in Barcelona, Vallès didn’t have a defecating piece of wood at home — only at school.

In those early school years, he recalls they fed the Caga Tió mandarins — not leftovers or lentils. For Monica Vallejo, mandarins are actually the end of the Caga Tió process. Kids keep leaving the room to pray or just give the log some alone time to do its biz, and every time they come back, more small gifts and caramels await. When the Caga Tió starts dropping mandarins, though, the present party has petered out.

After that kids in Catalonia and Aragon will have to wait two more weeks until Three Kings Day to get presents. That’s when the three magi who visited baby Jesus come bearing gift-wrapped boxes, and those magi can carry a Sony PlayStation.

HolidaysIn Iceland, Christmas Is Celebrated With a Bloodthirsty Cat, 13 Mischievous Santas, and Their Evil Mother
Tagged
Culture Holidays Spain
What did you think of this story?
Meh
Good
Awesome